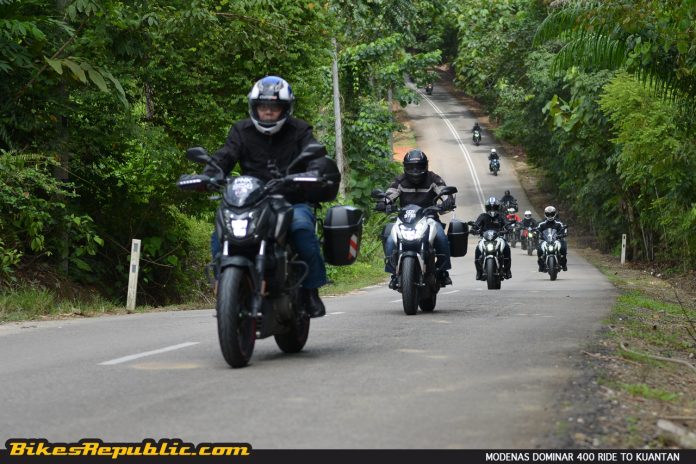 Modenas organized another ride for Modenas Dominar 400 owners, this time to the seaside city of Kuantan, Pahang.

The ride was also part of Bajaj’s #motography and Modenas’ #motographymalaysia initiatives. The project seeks to collate the best pictures of the best riding destinations worldwide from Dominar owners themselves; since the manfucturer calls the Dominar 400 a sport tourer. 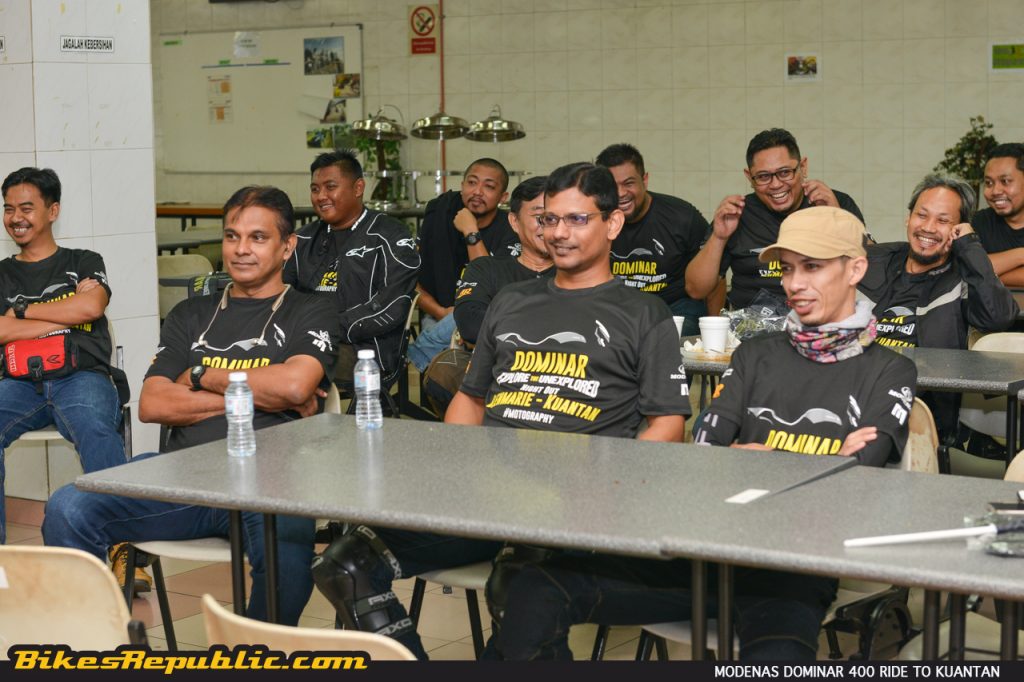 There were many differences to the ride this time. It was to be the first with an overnight stay, the fun games are more extensive and there was a bonfire at the beach.

The twenty participants, backup crew, marshals and representatives of Bajaj Auto grouped at the Modenas HQ in Glenmarie on early Saturday morning for some light breakfast. A representative from Bajaj said a few words before the safety briefing. 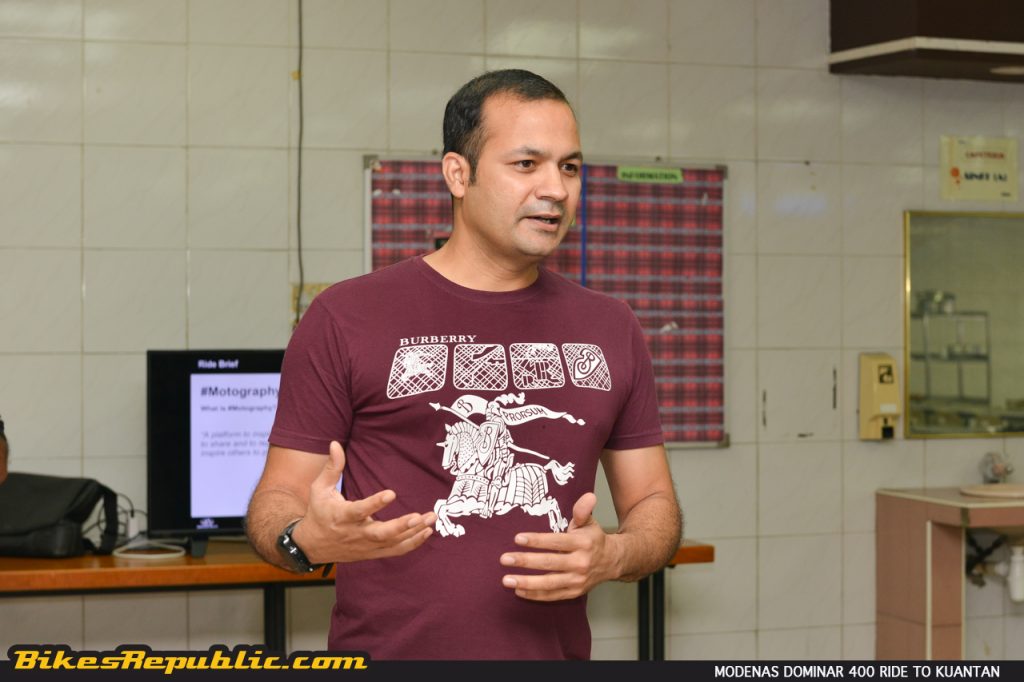 Light rain started to fall just as we were leaving the Modenas HQ. Indeed, it had been raining heavily all across the nation for the entire week and it was definitely on our minds. The roads were still wet from the midnight shower. 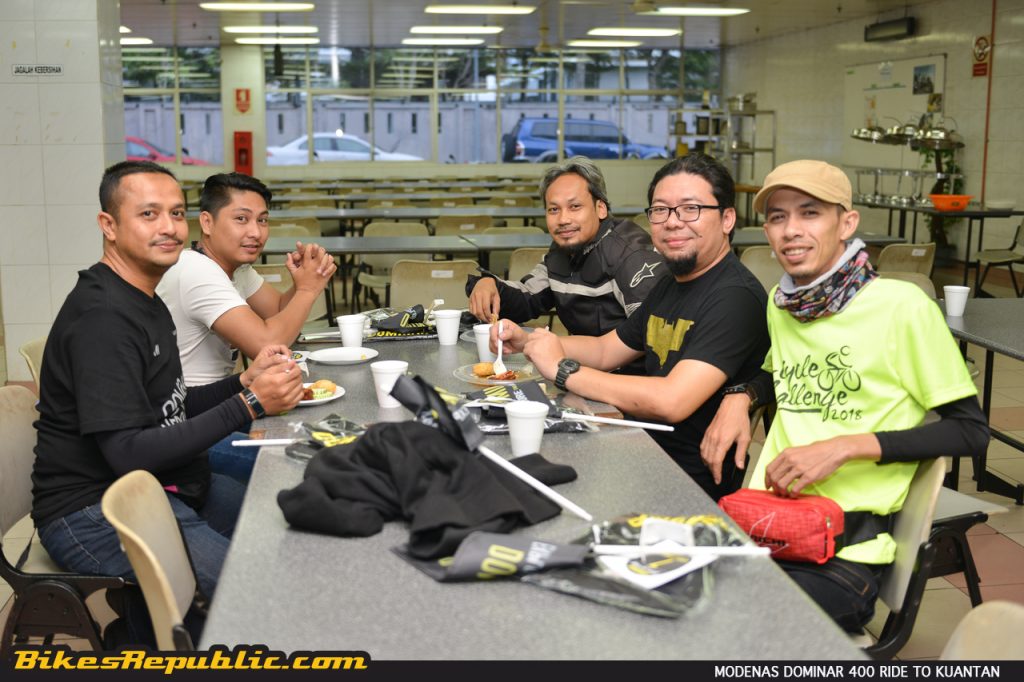 We proceeded all the way to the Karak Highway from there. Traffic was already starting to pick up although it was just around 9am. There were no large groups of weekend Karak GP riders, thankfully. 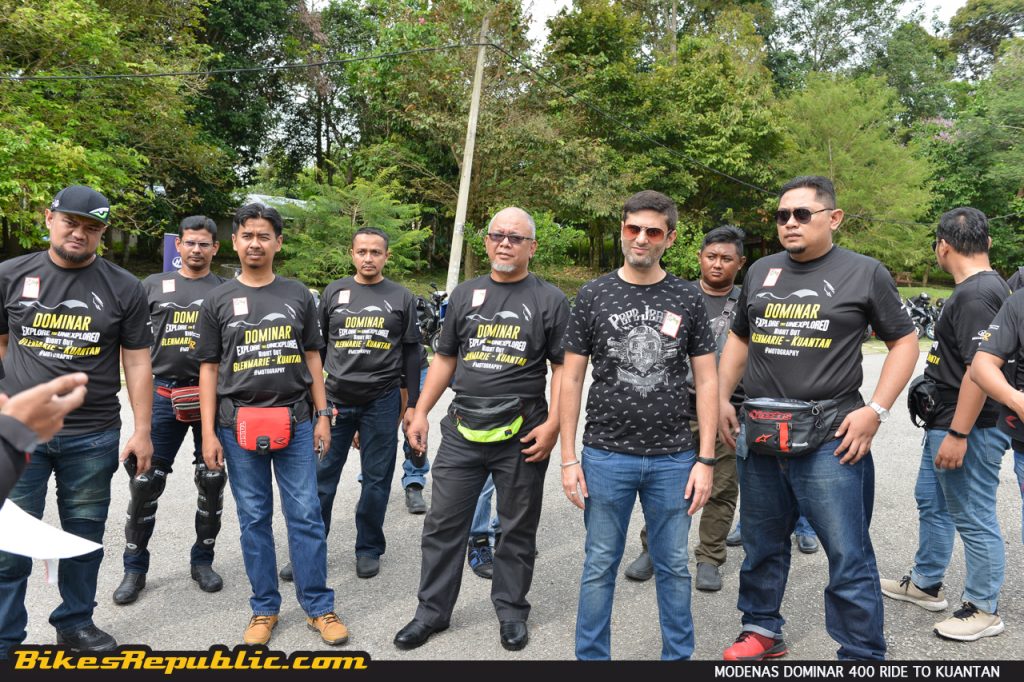 We refueled at a Shell station along the Karak Highway before exiting toward Lancang. From there it was a direct ride to the Kuala Gandah Elephant Sanctuary for the first #motography stop. 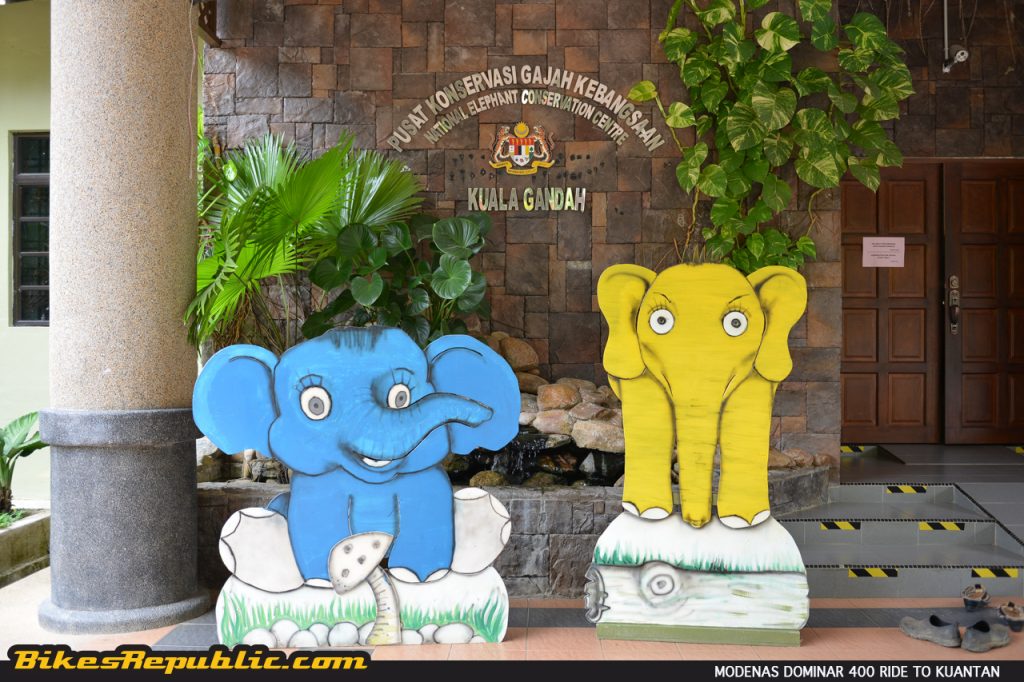 Participants had a great time mingling with the elephants, although we could not get in our motorcycles in to shoot pictures. Entrance is free, but visitors could contribute any amount they so wished. 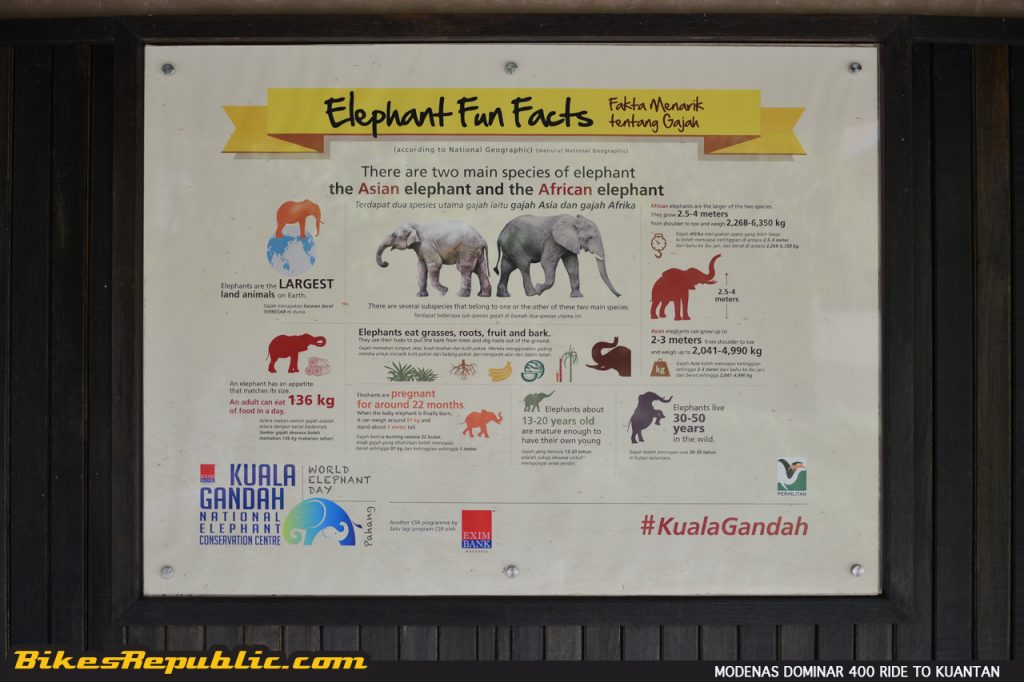 Visitors can also purchase bundles of sugar cane at RM3 and feed the elephants. There were two sections, one for the babies and teenaged elephants, and another for the adults.

Without the benefit of a guide, we could only surmise that the elephants were rescued and/or brought in for treatment. A baby had a leg in a crutch, an adult had malformed from legs. It was sad to see on one hand, but we took comfort that they are well-cared for. 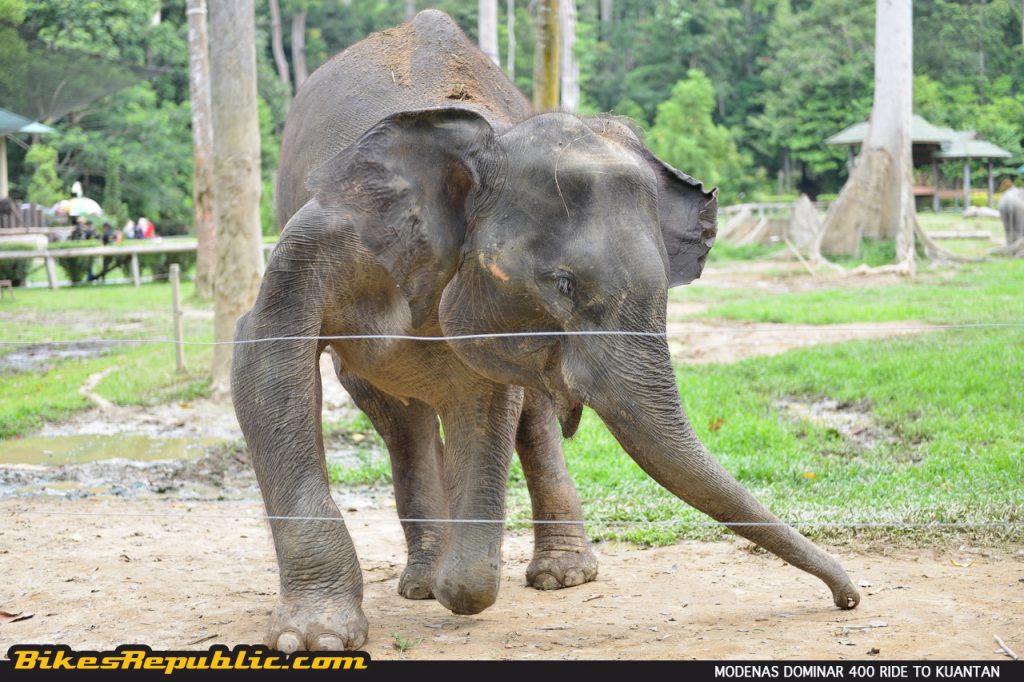 Later, the rangers brought three full-grown elephants out for a walk around the sanctuary. And my, were they huge! 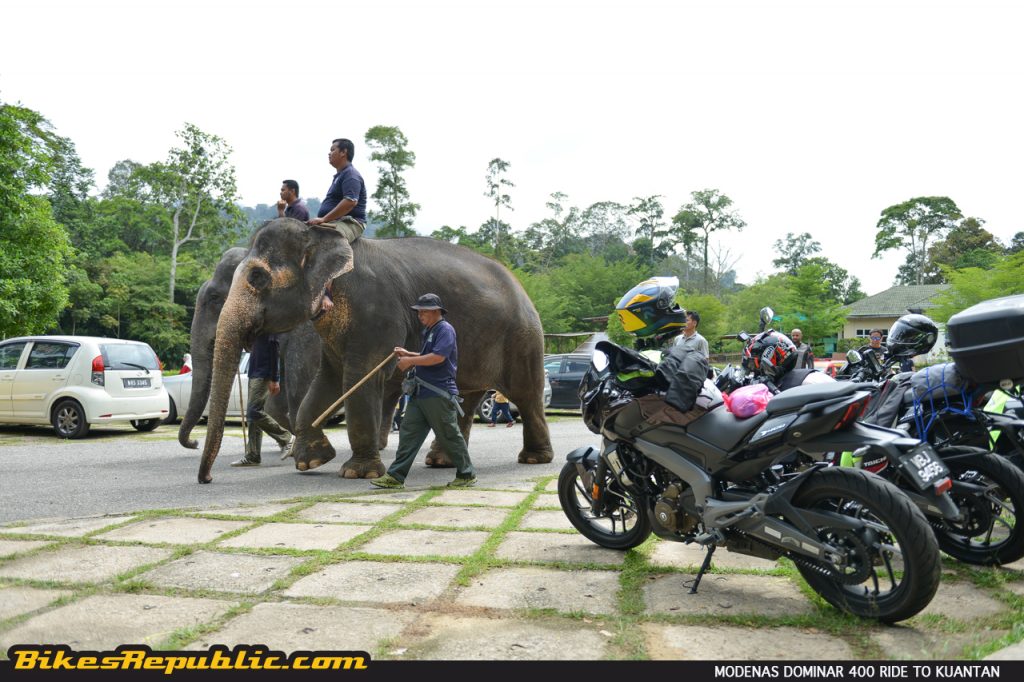 We left the sanctuary and re-entered on the East Coast Highway (LPT), stopping again this time at the Gambang R&R for fuel.

We arrived at the seaside Mandurah Hotel just in time to for lunch and check in. The hotel served lunch at the seaside terrace and the cool ocean breeze was a welcomed relief after riding in the heat.

A treasure hunt was held later that afternoon. The hotel staff had done a great job to set it up. They even handed us sticks of mosquito repellant. Participants were broken into groups and they had to solve puzzles, dash on the beach, do push-ups, commando crawl and dig into the sand for their “treasure.” The winners walked away with RM100 in cash per person.

Fishermen were returning to their base while all these were happening. 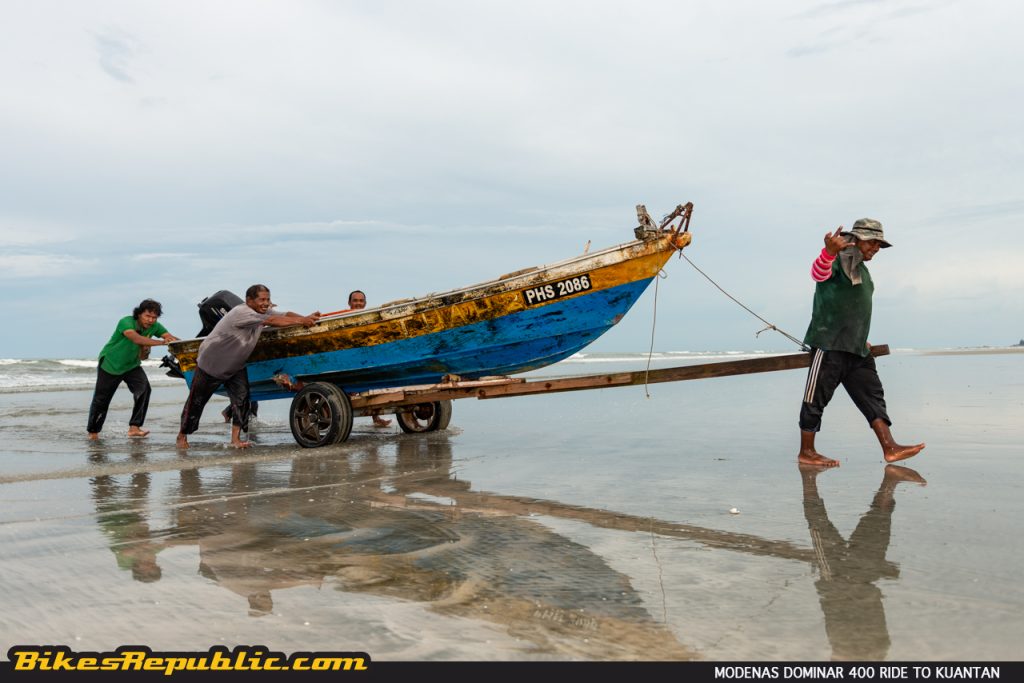 Dinner was again served at the beachside terrace while an excellent three-piece band belted out hit after hit song. The hotel staff lit the bonfire on the beach in the meantime. 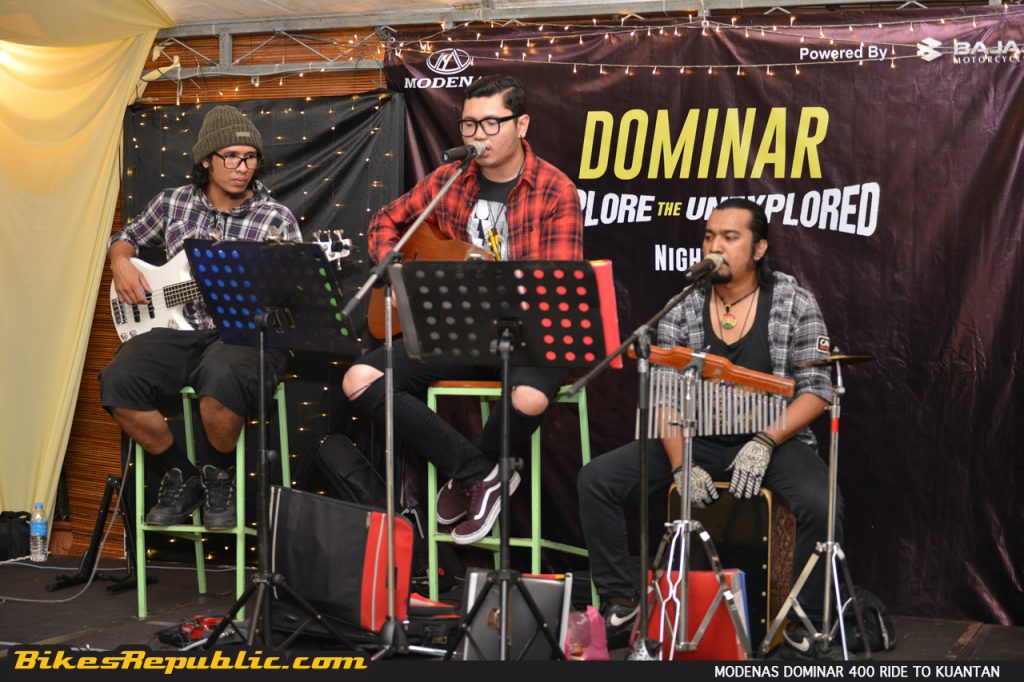 We adjourned to bonfire where the CEO of Modenas, En. Amirudin Abdul Kadir addressed the riders. Participants also forward questions regarding their bikes to the Modenas crew and Bajaj representatives. 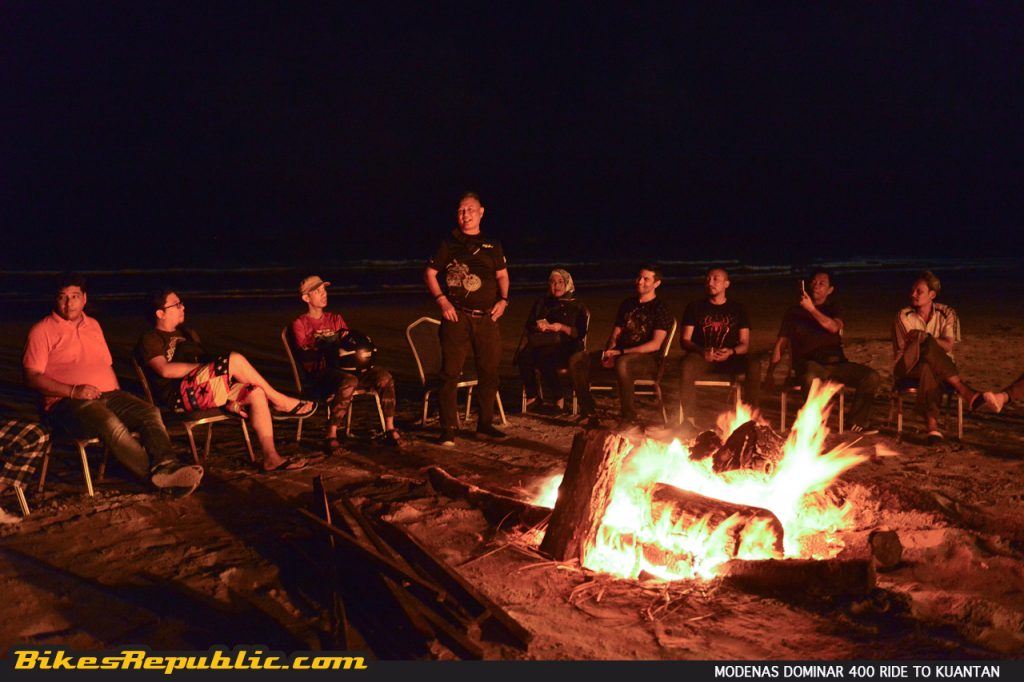 We arose early the next day for breakfast and checked out for the return trip. But first, we headed to Cherating for the second #motorgraphy stop.  The hotel staff were also at hand to send us off. (We recommending staying at the Mandurah Hotel if you plan on visiting the Kuantan seafront.) 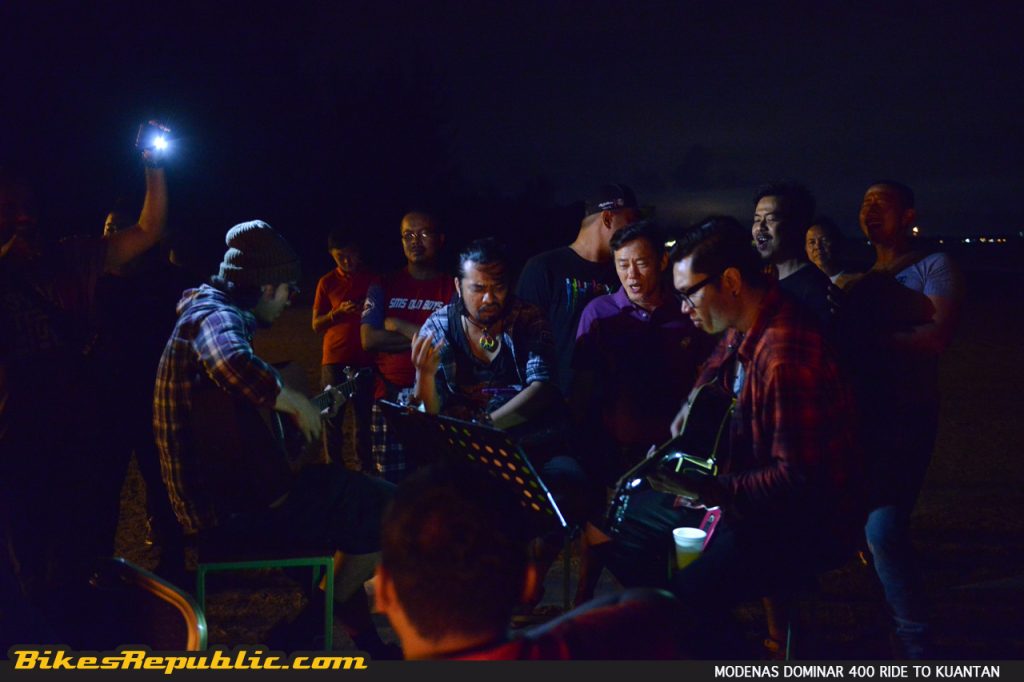 The resort town is only 30 km or so from the hotel but traffic and road condition (including a flooded stretch) forced us ride (really) slow. The participants were given 30 minutes to seek their preferred sites for photography.

With that done, we rode back out to the LPT.

But bikers beware! The highway is so arrow-straight that car drivers often speed here like it was the front straight of the Sepang International Circuit. They have so little patience that they even resort to overtaking on the emergency lane (video coming up).

We stopped at the Gambang R&R for fuel and decided that the ride should follow the “free and easy” format compared to a convoy for safety and avoid holding up traffic while we overtake other vehicles en masse.

We met up for one last time at the Genting Sempah R&R before saying our goodbyes.