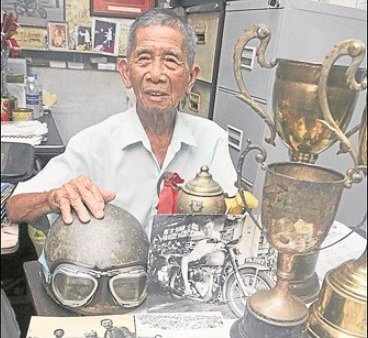 It is with deep sadness that we report to you that one of Malaysia’s motorsports legend, Kuan Huah Chin aka “Bulldog Kuan” had passed away yesterday. Those who have been involved in the national motorsports world here in Malaysia are aware and thankful of all the contributions made by this very legendary Malaysian GP rider.

Deeply saddened by the loss of our very own Malaysian motorsports legend – Bulldog Kuan @ Kuan Huah Chin. Bulldog was a racer ahead of his times, and as the President of the Penang Motor Sports Club, had been one of the main organizing clubs for the Malaysian Cub Prix Championship since the early days. We will always cherish his contribution towards the sport. Our deepest condolences to Kuan Meng Heng and his family. Our prayers are with the family during this difficult time. RIP Uncle Bulldog. #legend #cubprix #cubprixgenerasi #motorsport

Known for his dominating racing antiques during the national GP races (which he started to get involved in as early as the 1960s), Bulldog Kuan together with the likes of Oh Kah Beng aka “Foreman Oh” dominated the national GP racing scene up until the 1980s. Even after his racing days ended, Bulldog Kuan was still very much active in the racing community.

Never thought this woild be my last pic with my sifu and idol, the great Bulldog Kuan, who has sadly passed away today. Even more shattering we all can’t attend his funeral due to MCO. Shattered. R.I.P. Uncle Bulldog.#motocycling pic.twitter.com/3AjQyeWbNO

The local racing scene has a lot to thank for with all the help and guidance received from this legendary GP rider. As the President of the Penang Motor Sports Club, Bulldog Kuan was one of the great supporters and contributors to the early days of what’s now popularly known as the Malaysian Cub Prix.

The Penangite also had his own motorcycle shop in Georgetown, Penang which most folks would simply refer to as Bulldog Kuan Motor. A lot of people in the industry regarded him as one of the masters of motorsports where he continuously provided support as well as wisdom to those who are involved in the motorsports scene, particularly two-wheels.

Our thoughts and prayers go out to the legendary Kuan Huah Chin along with his family and friends. May his soul rest in peace.