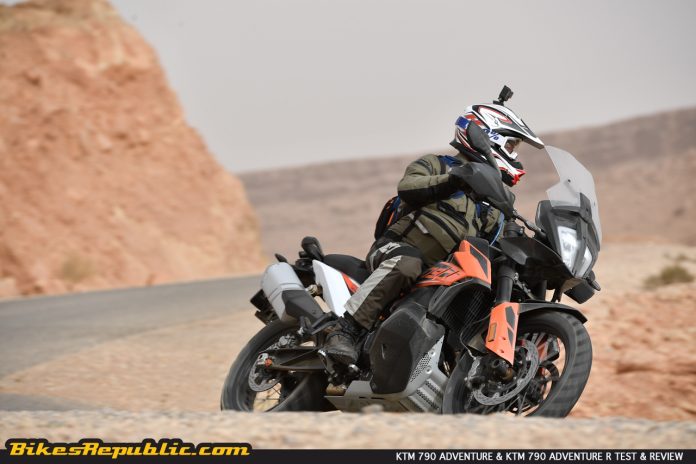 The base of operations was set in the oasis town of Erfoud (known locally as “Arfoud”), near the Algerian border.

Introduction to the KTM 790 Adventure platform

The 790 Adventure family is touted as the “most-capable adventure bike in the market.” KTM are confident that it will revolutionize the adventure/dual-sport category, by moving away from the “traditional template” of dual-purpose motorcycles. 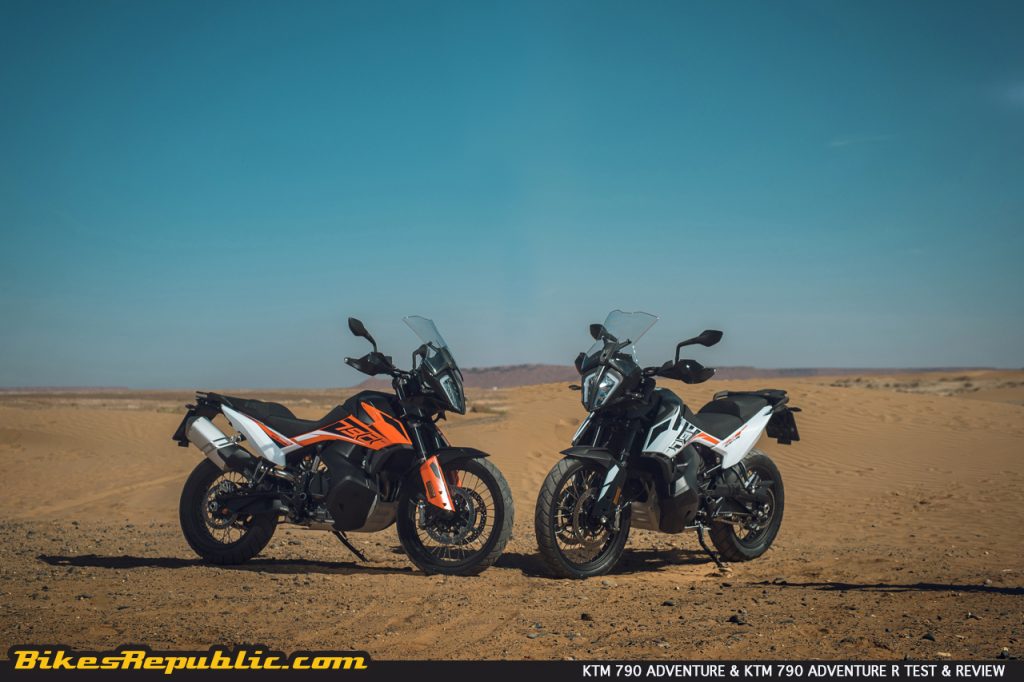 In developing the bikes, KTM says that they have been listening to customers from the casual offroad rider to the pro such as Chris Birch. 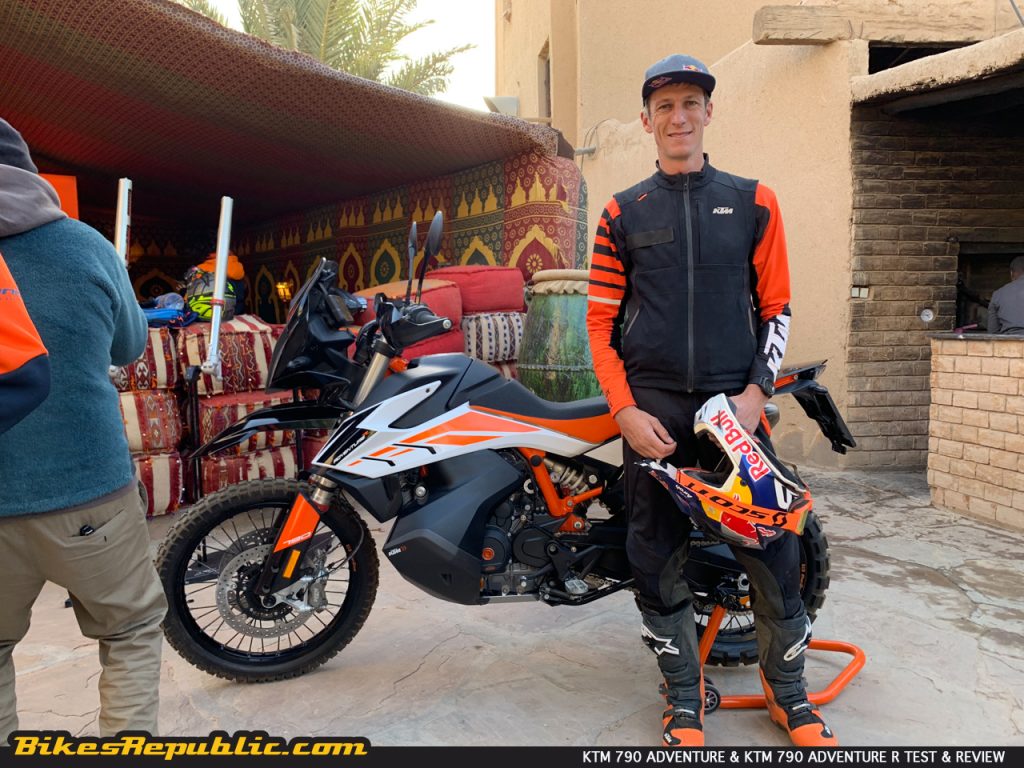 Their mission resulted in two distinctly different models based on one platform. The 790 Adventure (which is normally called the “S” model) is more road-biased, while the 790 Adventure R is more off-road biased.

Although they resemble the 690 Enduro R, they are actually based on the EX/C concept of compactness and lightness. 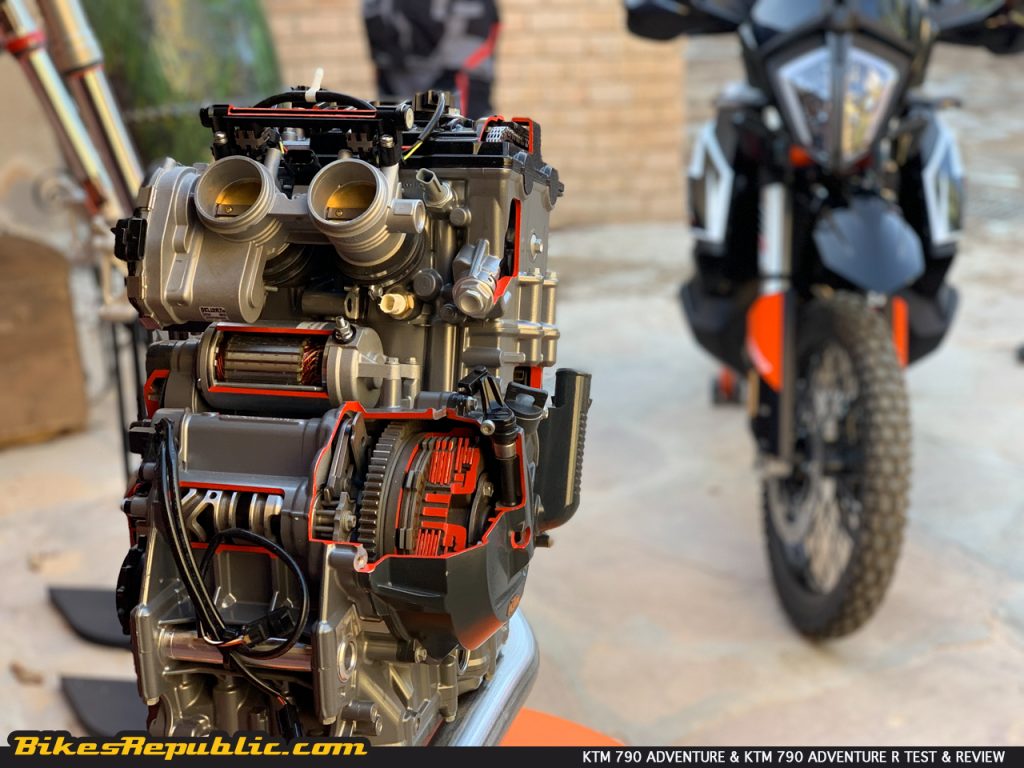 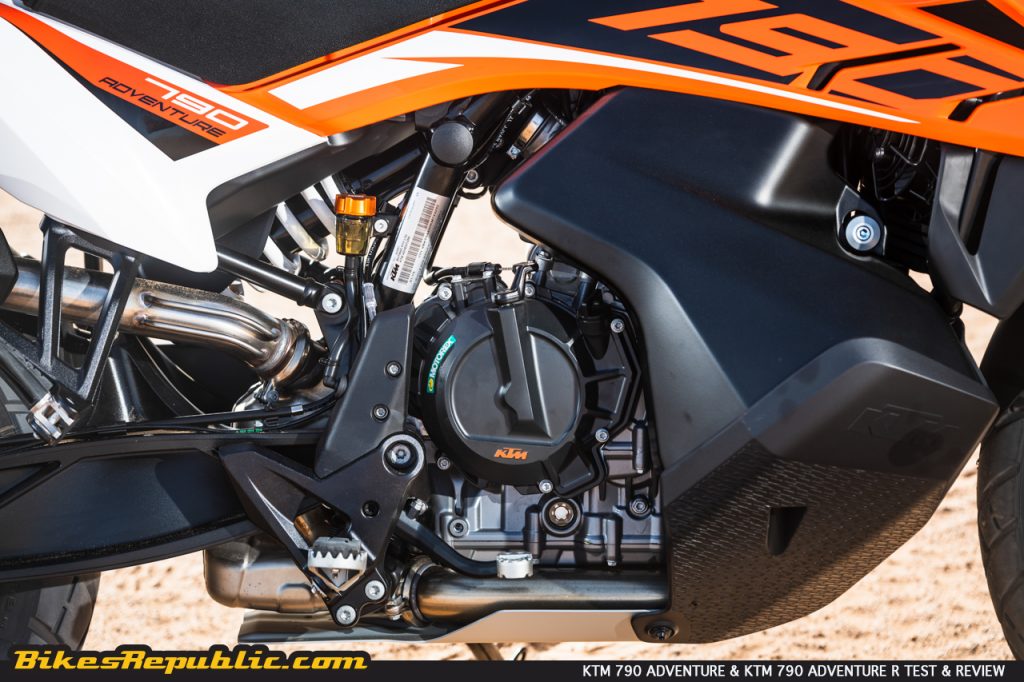 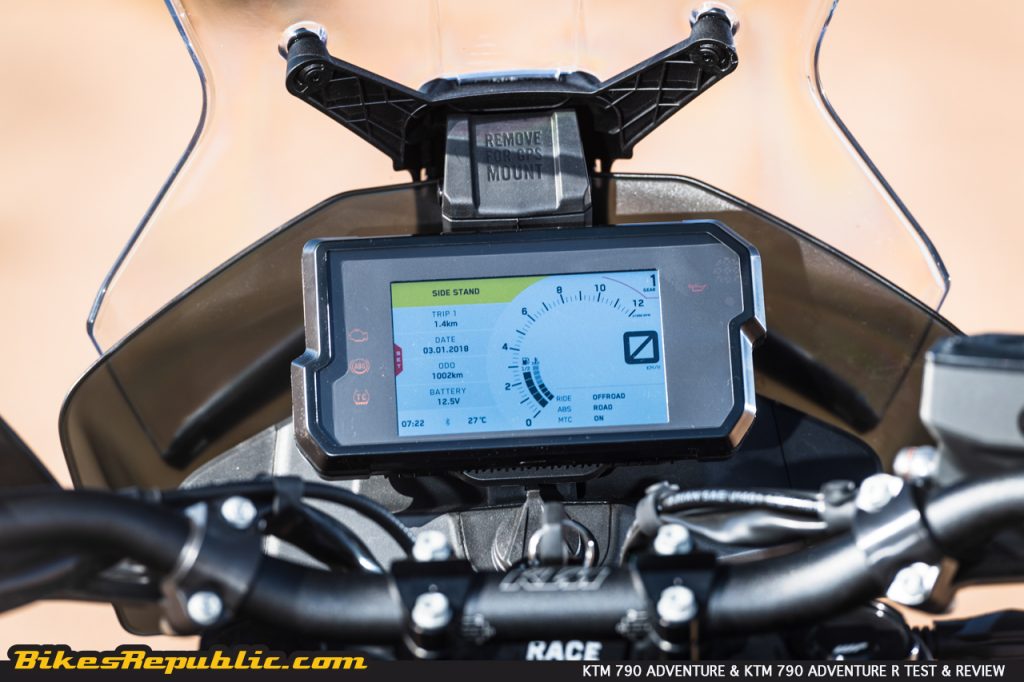 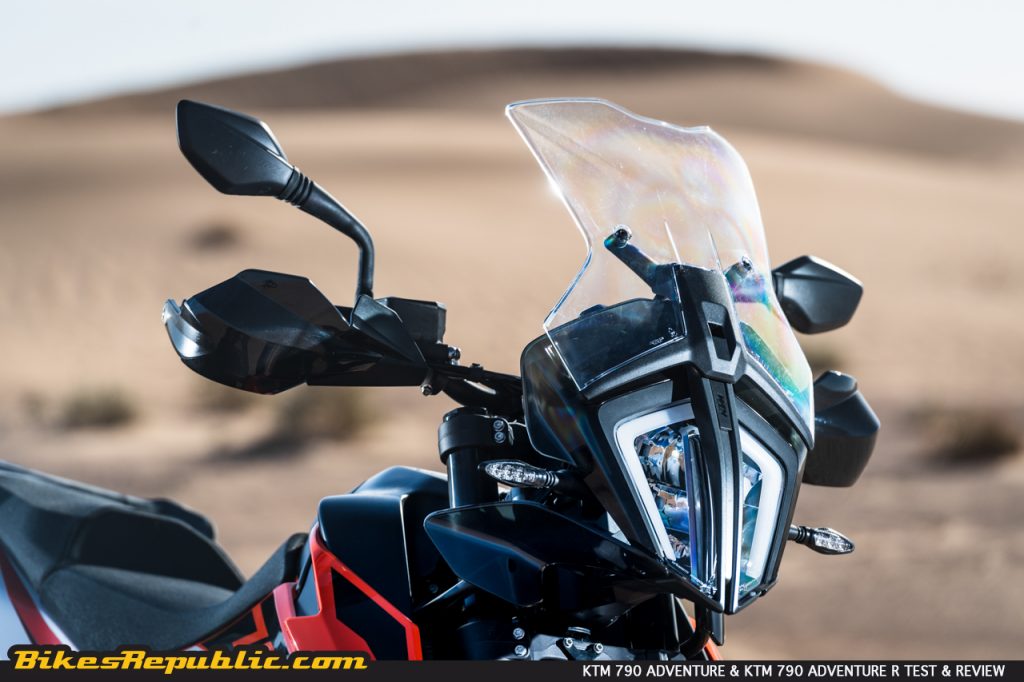 We’ve covered some of the features and technical stuff in other articles prior to this (please click here). But what we’ve not are the electronics.

Both bikes use IMU-based traction control and cornering ABS, in addition to Motor Slip Regulation which works in conjunction with the slipper clutch. There is also Offroad ABS for both models.

The Rally Mode has a new implementation. Instead of being based on a certain preset “strategy,” it’s fully configurable to the riders needs and riding conditions. 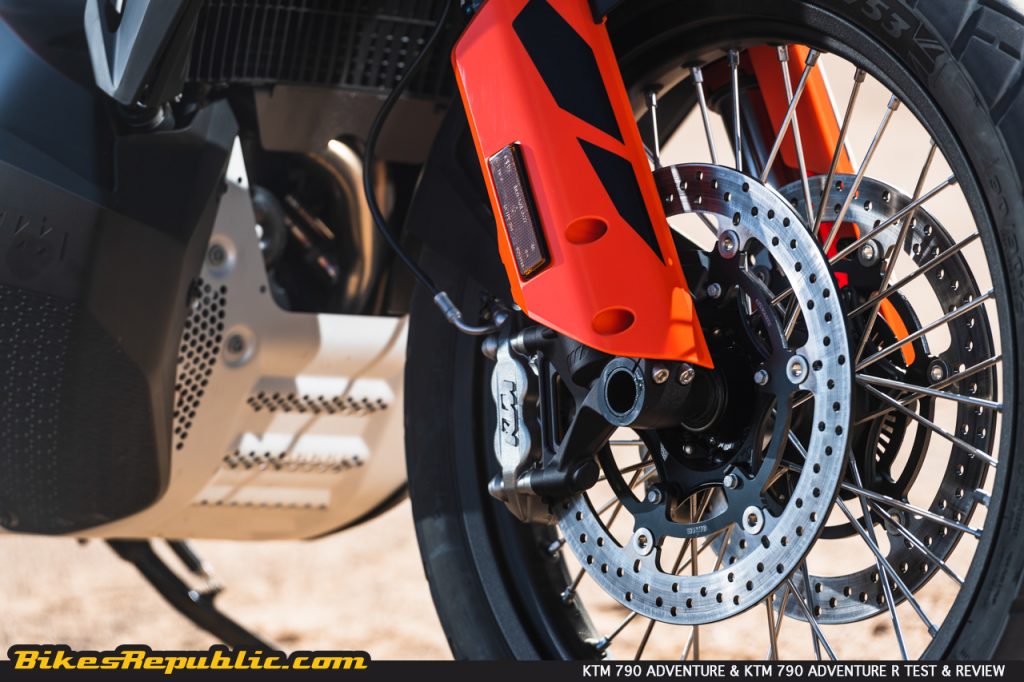 For example, after switching to Rally Mode, you can choose the level of throttle response to either Street (smoother) or Offroad (more aggressive). After that, you can switch the level of traction control intervention from 1 (almost totally off) to 9 (most assistance). The TC level can be altered on-the-go via the up and down buttons on the signature left-hand switch block.

Rally Mode can be added as an option to the base model. Other electronic options for both bikes are Quickshifter+ which works for up and downshifts, Cruise Control and MyRide 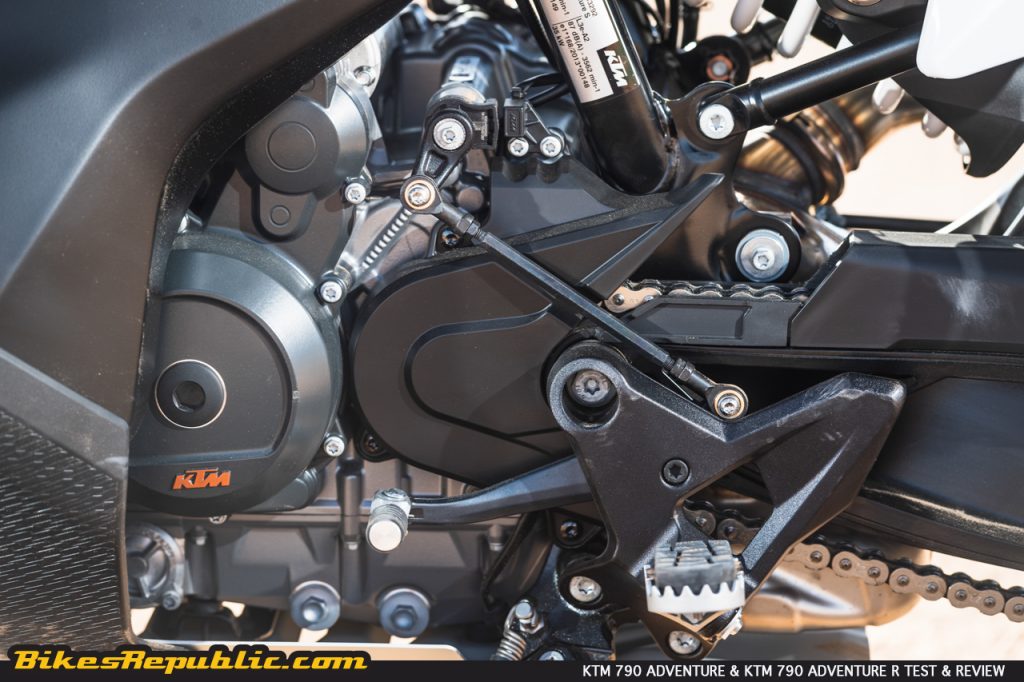 Let’s get on with riding rather than being stuck in too long of an introduction.

We first rode the Adventure since it’s the base model. 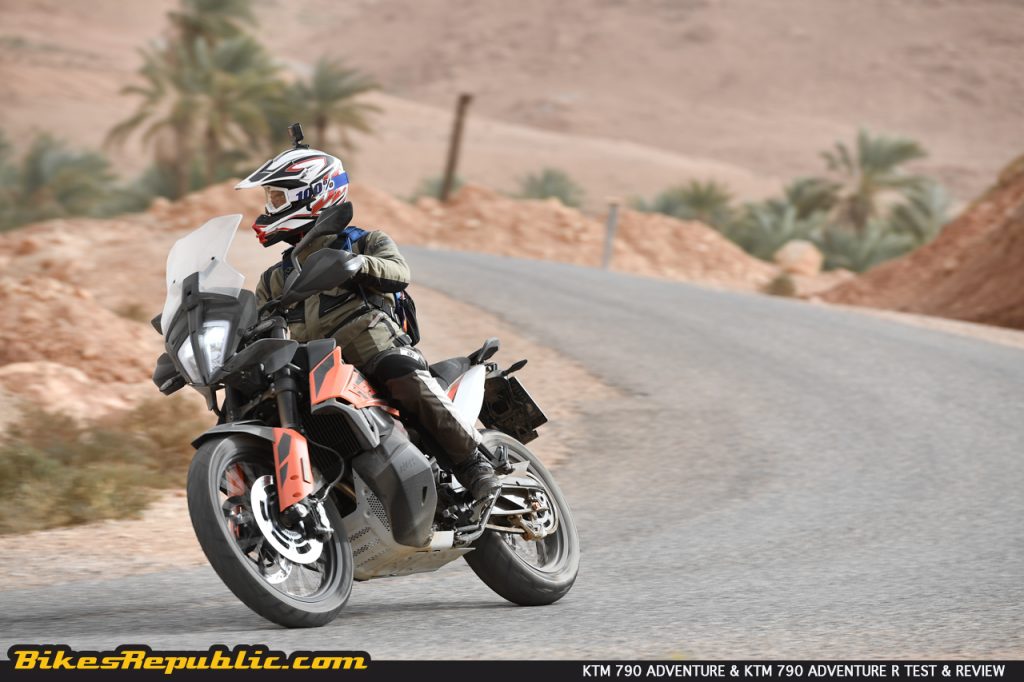 Our session was later in the afternoon, so the weather was much cooler. But that also meant that the wind had grown stronger.

Climbing on, the first thing I felt was the similarity to a KTM EX/C-F enduro. The top of the fuel tank was just above my belly button, rather than below the rib cage. There are two reasons for doing so:

Although stated as 850mm in the lower position, the seat height allowed me to plant one foot solidly on the ground, while the other rested comfortably on the footpeg. 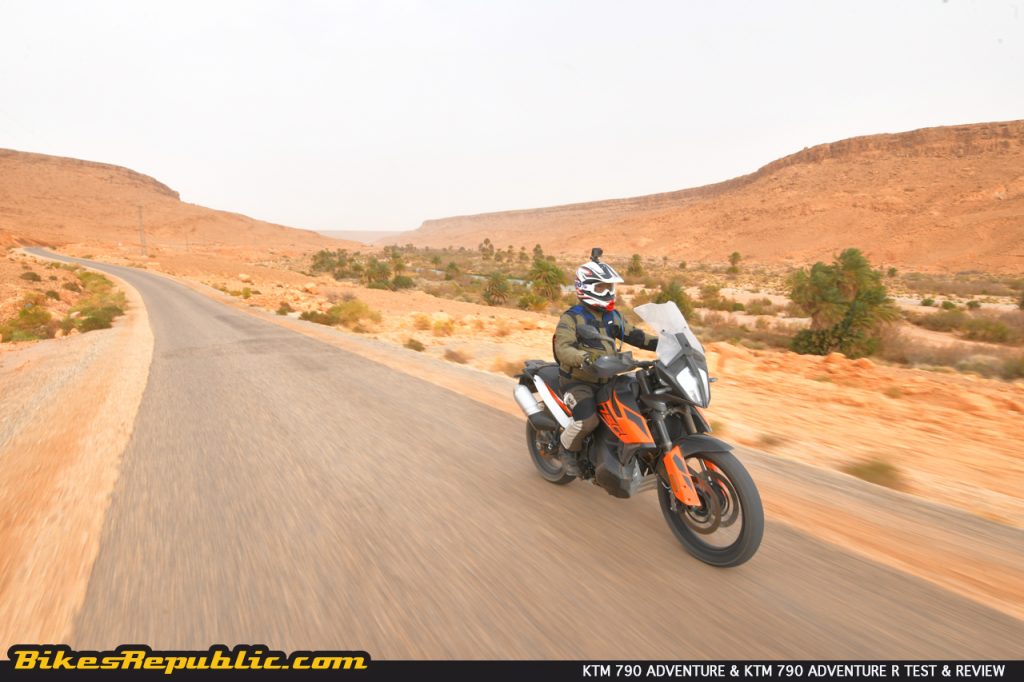 The engine pulled quickly through the gears while the quickshifter kept the revs up. The sweetest changes were from 3rd-4th-5th. The gears popped in immediately without much of a stutter. Despite the strong winds and slipper road covered in fine sand, we managed to clock nearly 160 km/h in a number of sections.

Still, the bike exhibited very light handling traits, being able to change directions quickly as we rode up the side of a lush valley. The single-lane road was twisty and inviting but the wind played havoc with my steering inputs. A few times the bike plopped over unexpectedly, causing the rear wheel to slip a little.

Besides that, the low fuel tank meant that my body was positioned further to the front of the bike. The handlebar felt a bit twitchy at times, like it would on an EX/C. I got a bit confused. 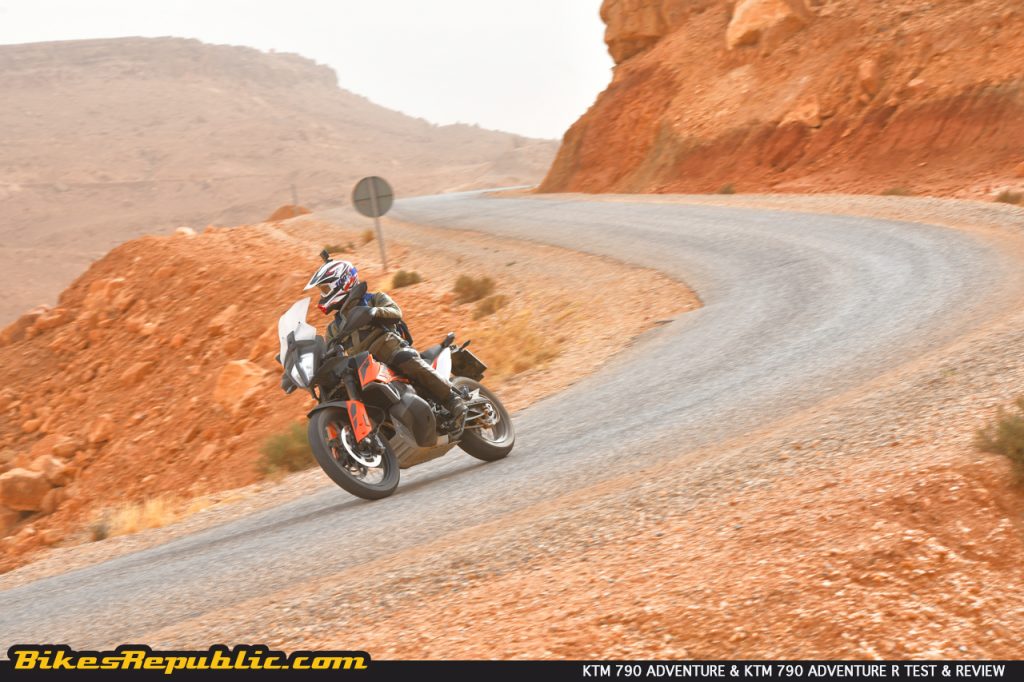 Was it me steering too hard?

We managed to ride the bike a short distance offroad to a vantage point, and  it felt well-balance. I just kept it in Street Mode, but the bike didn’t feel like it was going to dump me onto the trail. Many of these riders have ridden in these types of conditions, which are totally different from ours in Malaysia.

When we stopped a Moroccan village to shoot street photos of the KTM 790 Adventure, youngsters came out to greet us and take photos with the bikes. In another village, even younger boys cheered as we rode by. They even encouraged us to pull wheelies by lifting on imaginary handlebars. 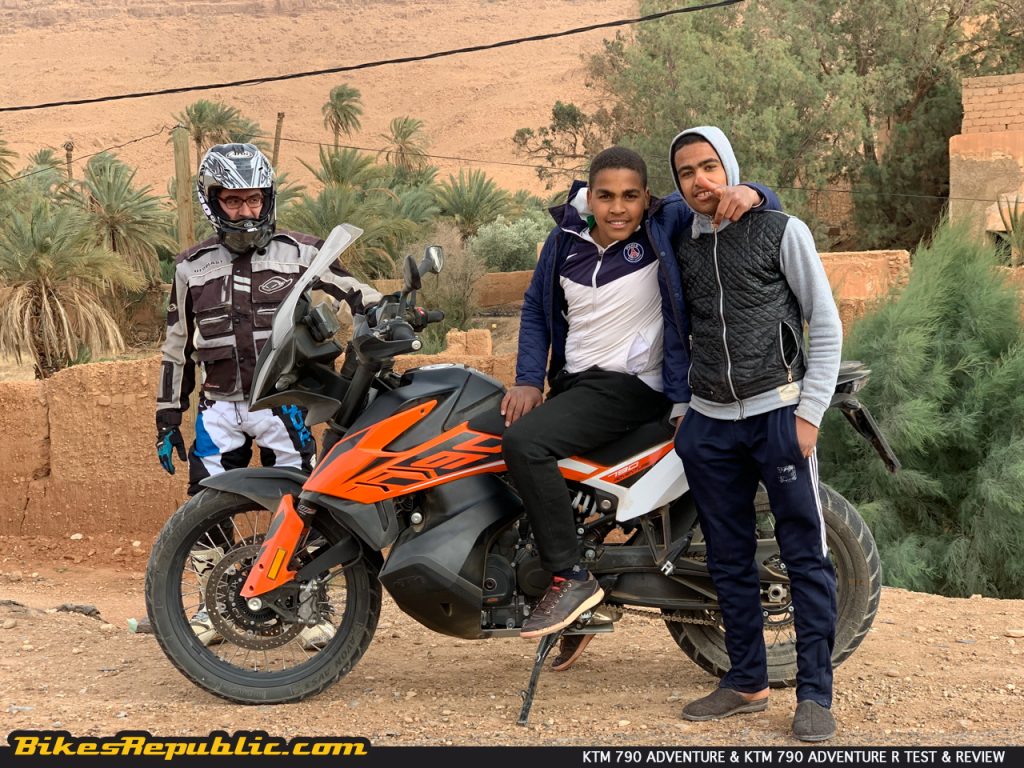 The wind died down on our way back to the hotel. Now the bike felt different. Still eager to turn with every steering input but wasn’t too skittish as before.

The organizers decided that we should leave much earlier in the morning to avoid the strong winds. We dragged our ragged bodies out of bed at 5.00am to freshen up and breakfast before heading out at 7am. My group was led by KTM Rally Team boss and ex-Dakar Rally winner Jordi Viladoms!

Anyways, the first impression on the “R” felt good due to the narrow body and handlebar set at just the right height and width. But I still had the same problem with all KTMs: Reaching the kickstand with the left foot. Maybe the Powerparts kickstand has a tang higher up the shaft… 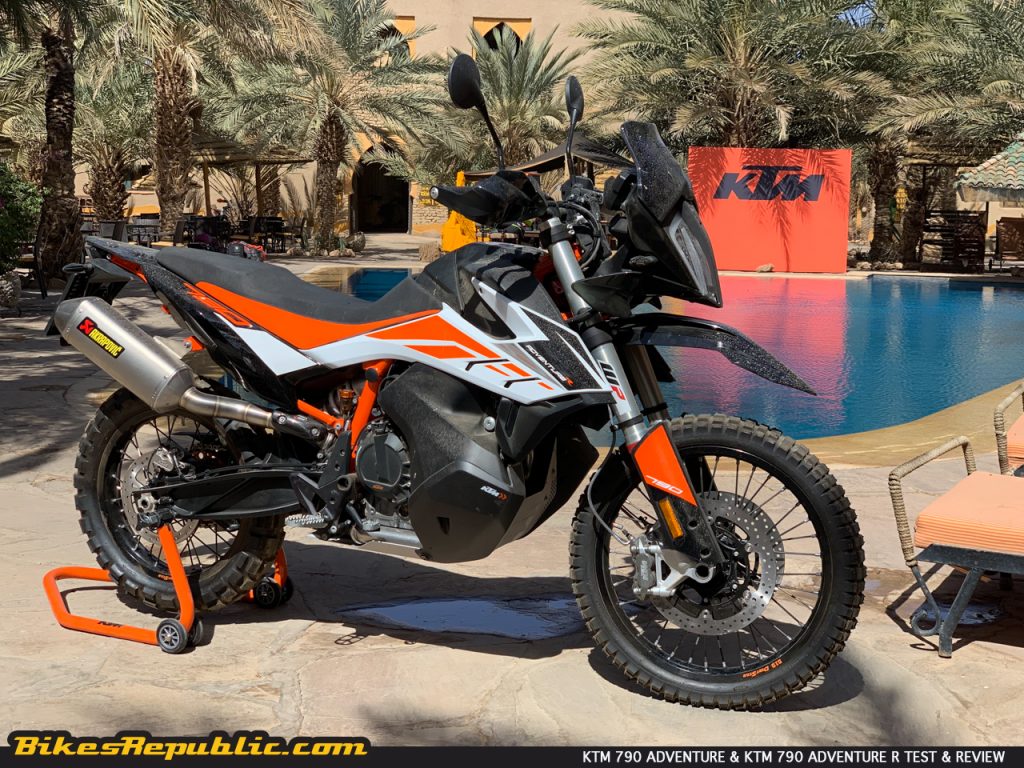 However, the R felt so much better when we headed out. The suspension gave the bike a much tauter feel despite the chunky offroad tyres. The R is equipped with fully-adjustable WP XPLOR split function forks and fully-adjustable XPLOR rear shock. Together, they 240 mm of travel, compared to the 200mm on the standard bike. 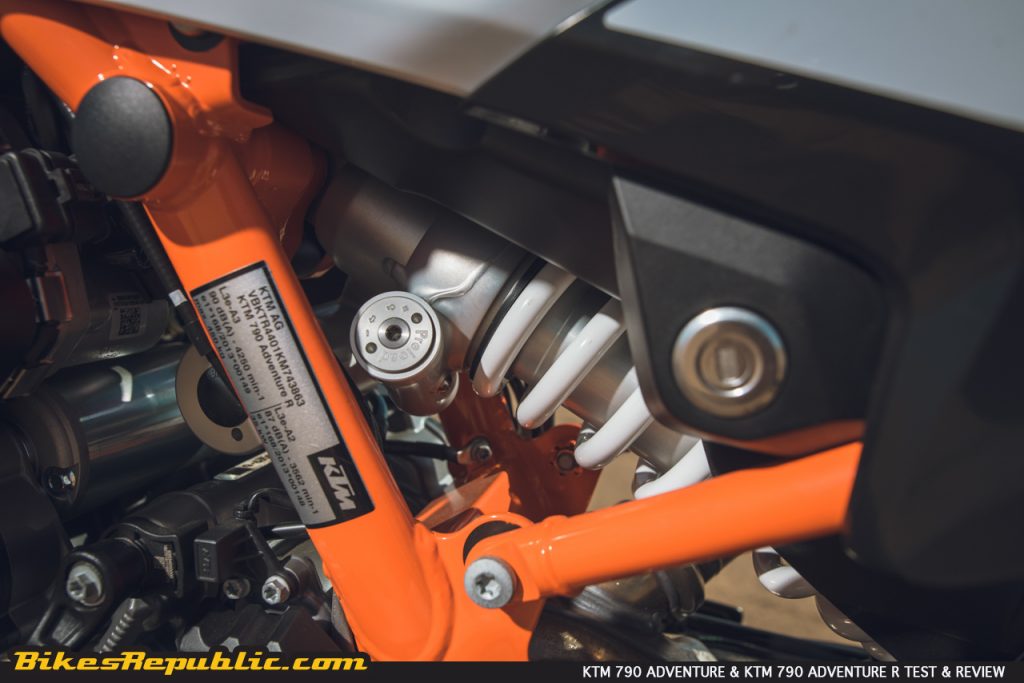 We soon hit the first trail, a hardpacked section. We continued riding in Street Mode until we stopped to switch to Rally Mode and select our preferred throttle response and TC level.

We cut into another trail with more soft sand. It was here that the low tank that confused me yesterday started to make sense. Standing up, my knees were well forward, so turns in the dirt were taken with confidence. I’ve always had problems with U-turning a bike, but it was easy on the R, as the weight is down low. 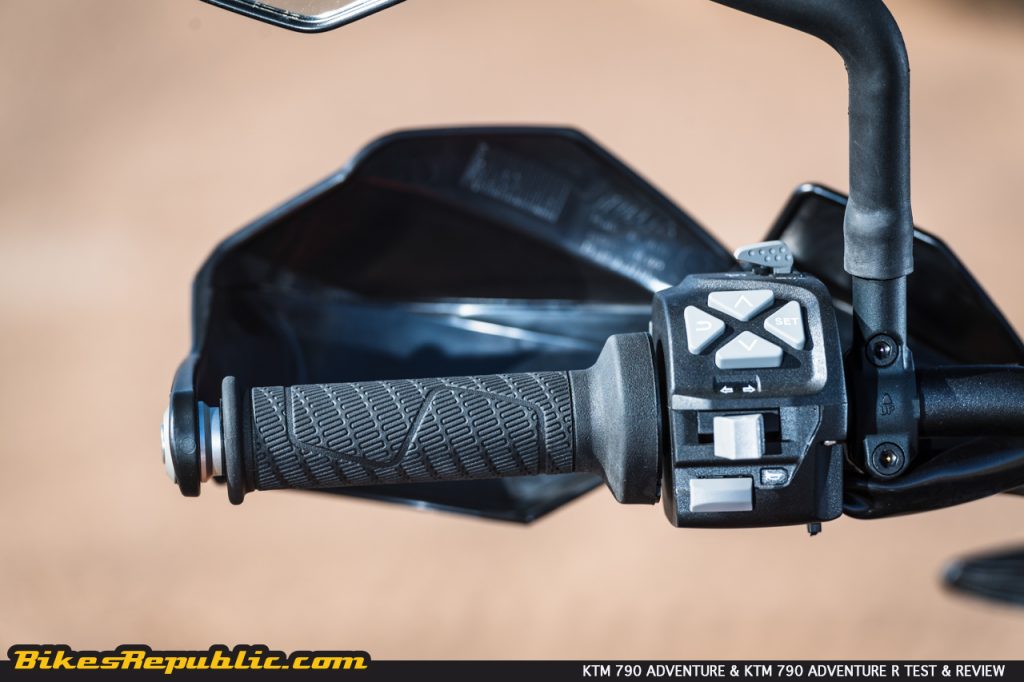 I’ve only ridden in sand once before in South Africa 5 years ago, compared to riding offroad in the mud and gravel we have at home. The sand grabbed at the front wheel as soon as I slowed down, throwing it left and right. But as soon as the power came on, the bike straightened itself out quickly and smartly. Unfortunately, as I said earlier, my body was so stiff from riding the computer desk.

We rode into the edges of the Sahara Desert. The flat, open country side turned into the sort of dunes we saw in movies like “The Mummy.” (I didn’t know the movie was filmed here at this point. More on this later.)

“Ok, so now we ride up those dunes for the pictures and videos,” said Senor Vilaroms. He switched off the MSR and MTC then said, “Ok, go!” Gulp.

On my first go, I rode up the side and gave the bike throttle. The bike cut smartly through the sand. 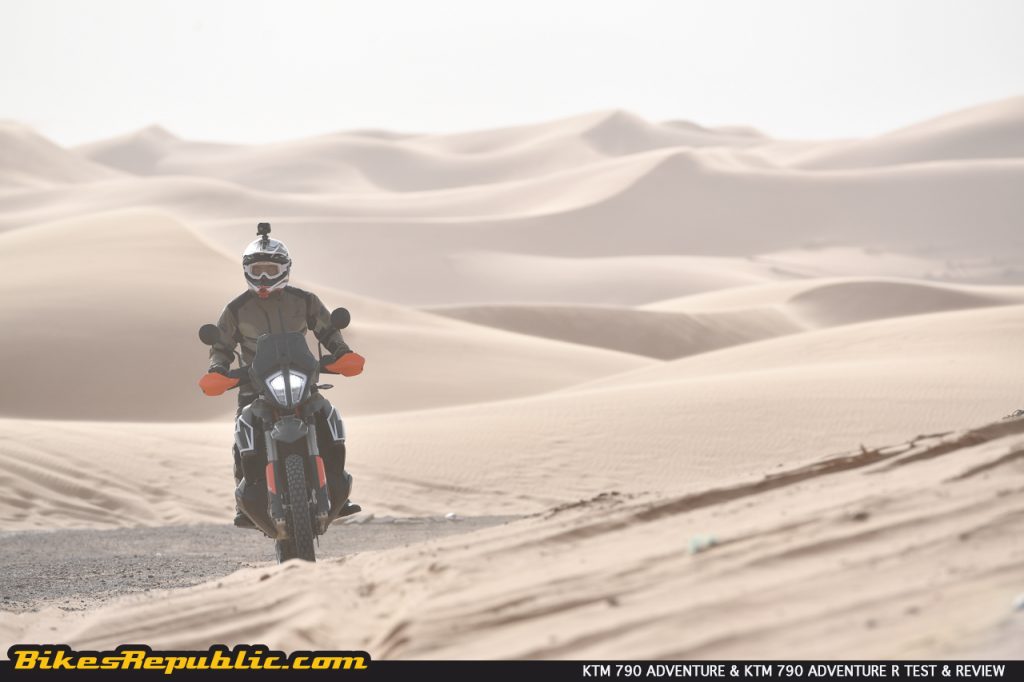 On the return run, the film crew was right in front. I was scared of hitting them so I slowed and leaned the bike left (instead of pushing it down). The sand grabbed the front wheel and I gave it as much power as I could without shooting straight into the photographer. The bike straightened up, but I was too close to them, so I tapped the front brake. The dune swallowed my left foot and we went down… in front of a whole row of other riders. I wondered if they were laughing or feeling sorry for me in their helmets.

The helpful KTM crew including Adriaan SInke, Senior Product Manager – Midrange came over to speak to me. They gave me the option of covering the course by road to the next stage before turning into a gravel and sand trial. Leading me will be Luke Brackenbury, the Press PR Street Manager. We could switch between the base model and R on the way if I’d like to. 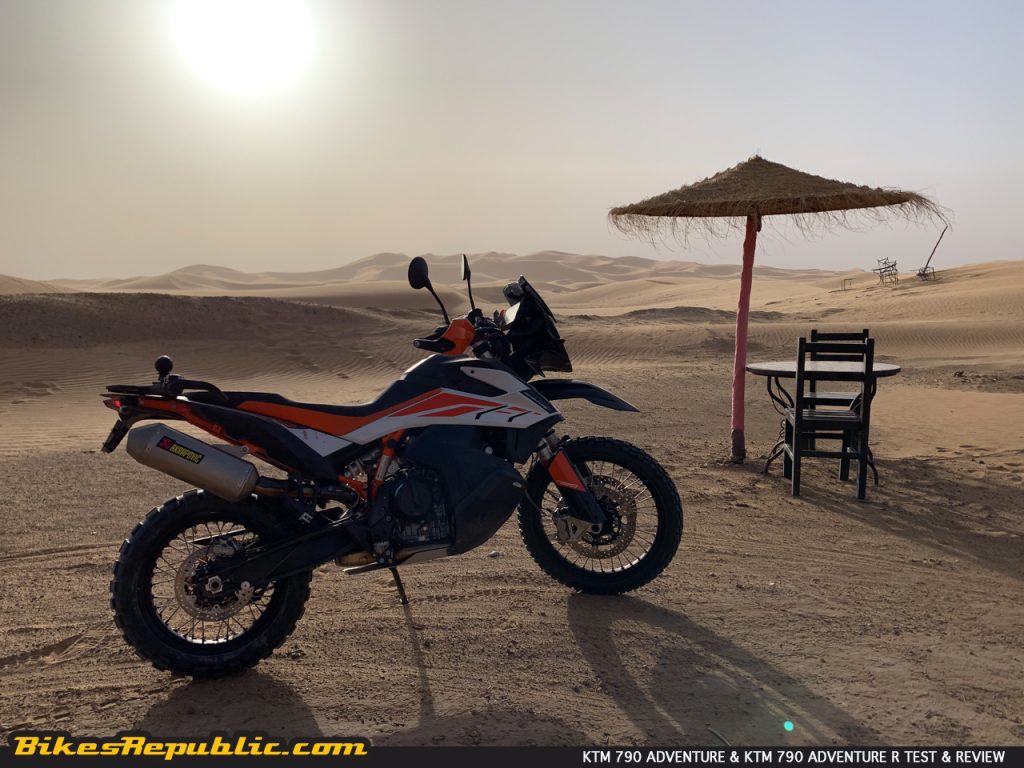 Luke asked, “Do you wanna go to the prison?” Eh? But I just agreed. (I had just uploaded pictures to Instagram saying, “Welcome to Tatooine” and now have a guy named Luke leading me.)

The 34 km/h side winds whipped up dust devils across the road but we rode through them. As soon as we come through the other side, Luke pulled a huge wheelie.

I got on the base model for the rest of the way and discovered that it was just as capable in the rough, even on the 50/50 road/offroad tyres. As my confidence level rose, the offroad lessons taught by Rob Armstrong, Oh Kah Beng and Chris Birch started to return. Now, I grabbed handfuls of throttle over deep sand and jump over rises. The 790 Adventure is made for this kind of fun! I even slowed to spin the rear wheel to fishtail it. BWAHAHA! Take that! 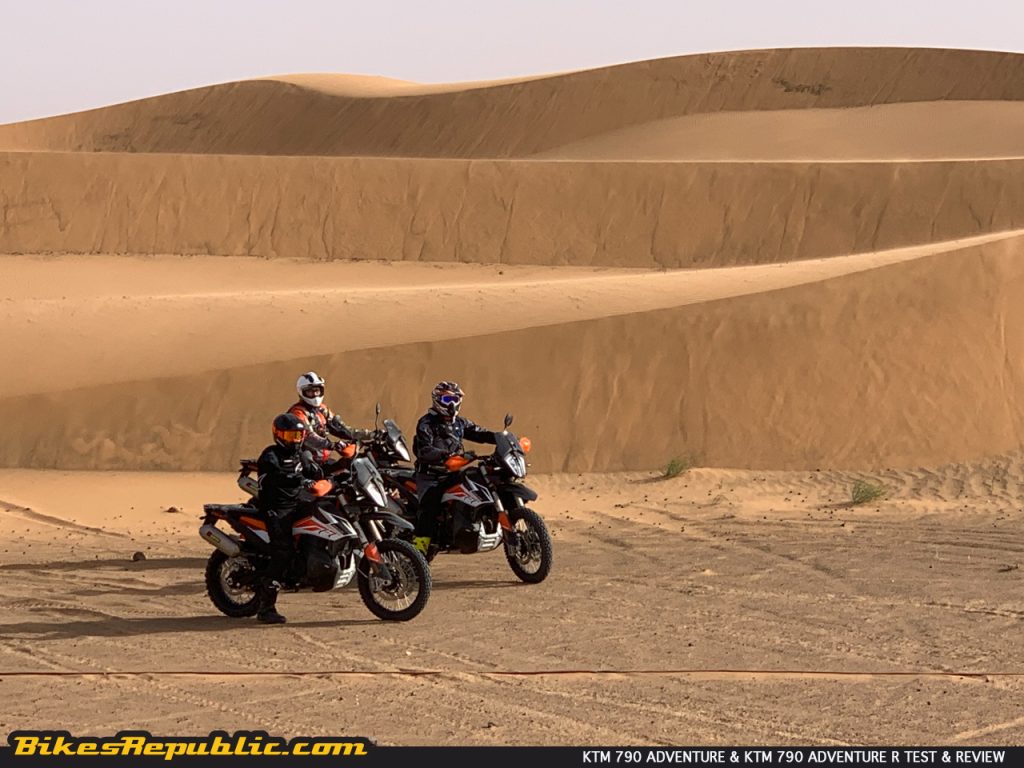 We made our way through the countryside which resembled NASA’s pictures from Mars. Indeed, NASA carries out lots of Mars research in this area. There were a number of movies shot around here, too.

Luke and I reached the “Prison.” It’s actually Gara de Medouar or “Portugese Prison.” I looked like the crater of an extinct volcano but it’s actually a rock formation from the prehistoric Cambrian/Devonian era. It’s called the “Prison” because it used to house African slaves to be sold to Portugal.

In recent times, it’s the film location for movies such as “The Mummy,” “The Mummy Returns,” “Prince of Persia: The Sands of Time,” “James Bond: Spectre,” and “The Secret of the Sahara.” WHOA! I was at Hamunaptra! 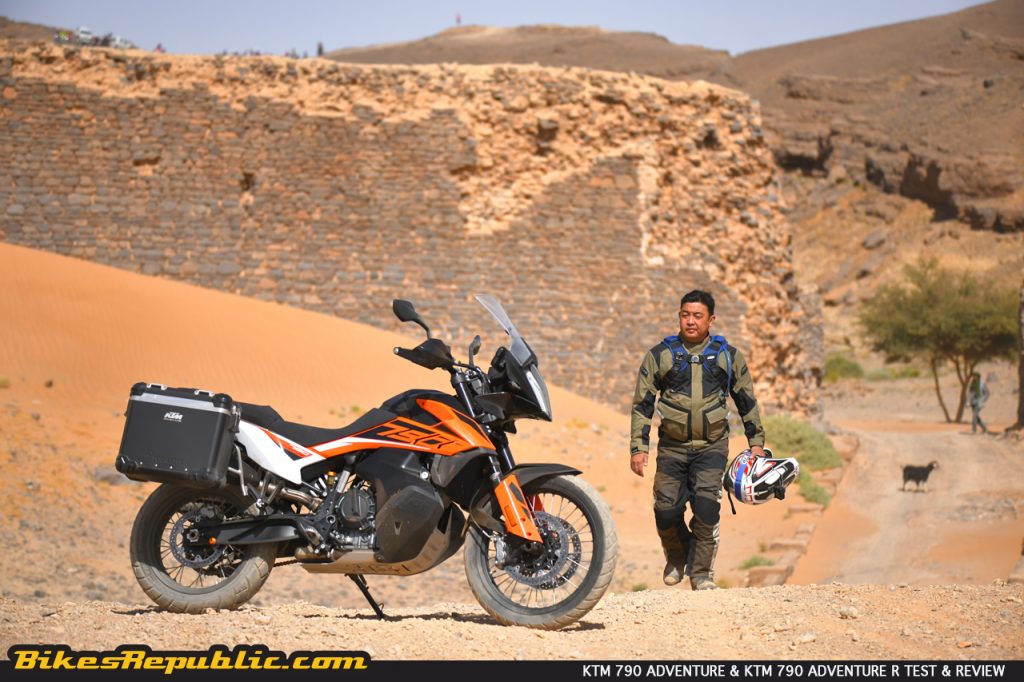 The trails leading to this location is listed in dangerousroads.org as being er… dangerous. But the 790 Adventure (standard) and 790 Adventure R shrugged it off like another Sunday ride.

We shot a few more photos and headed back to the hotel. A few riders from another group joined us to head back earlier, hoping to catch the Qatar MotoGP at the hotel. The wind had truly picked up at this point and the bikes in front were leaning sideways while travelling straight. We made it back to the hotel in one piece. 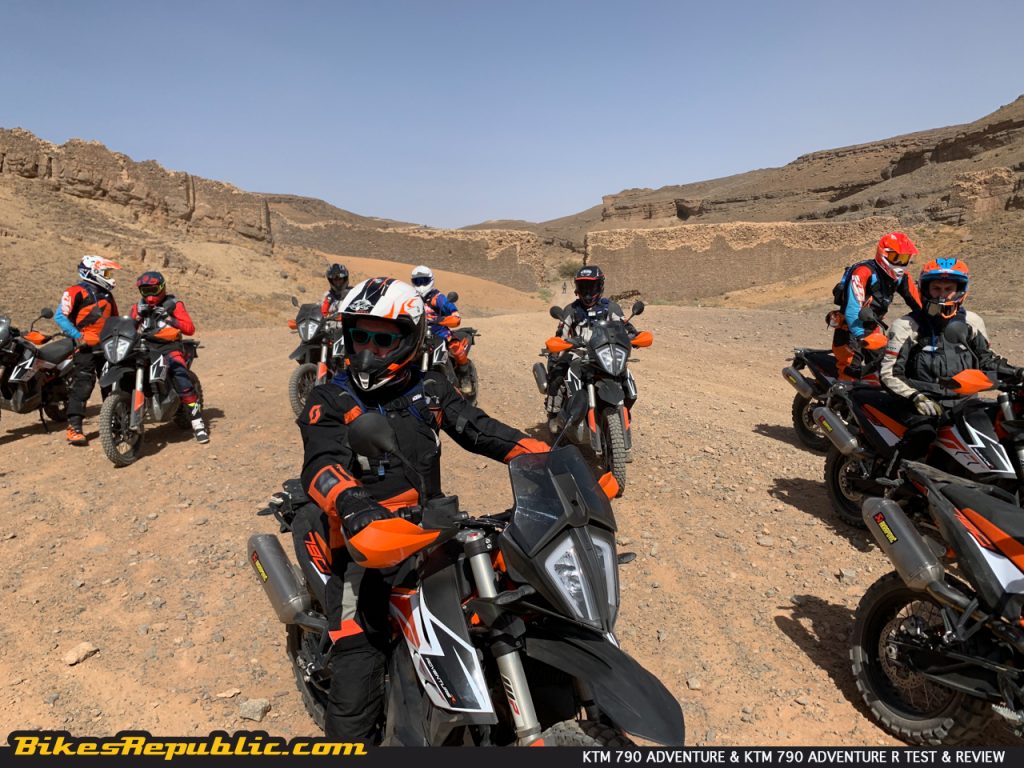 There two things which I felt could’ve been better. One was the standard seat on the base model which was a little stiff but there’s always the Powerparts gel seat. Two, KTM had welded a tang on the R’s kickstand but it was low down. Other dual-sport bikes have stands with the tangs higher up. But again, these are just personal gripes. 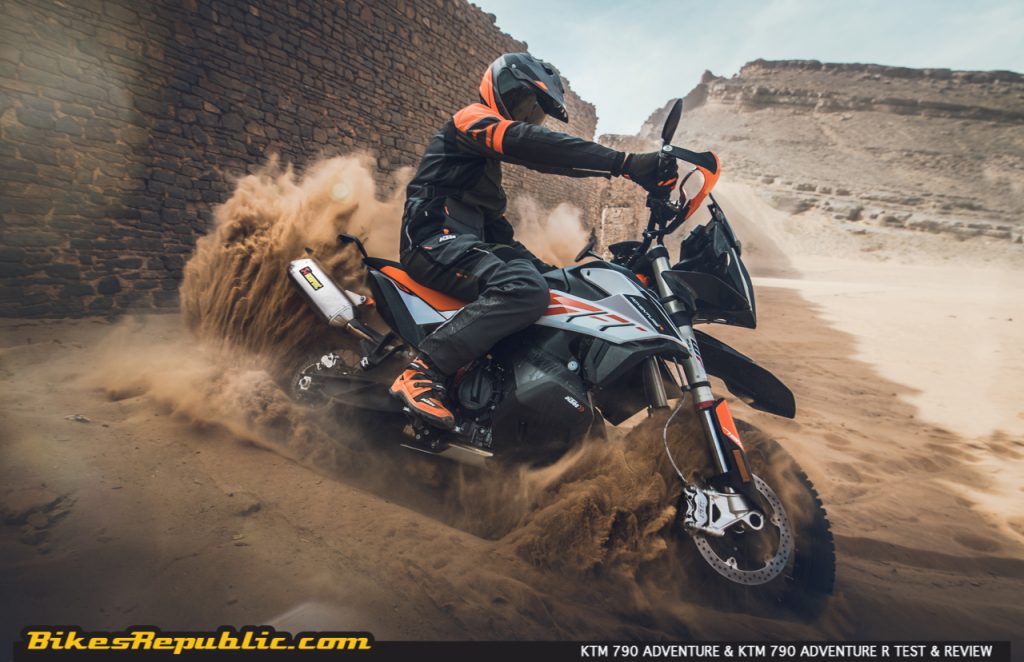 Both KTM 790 Adventures are truly offroad capable as the manufacturer advertised. They may lack the sport-touring feel of “traditional” dual-sport bikes but if your trip includes tougher offroading than just a couple of jungle trails then you can consider the base model. On the other hand, serious offroad riders plus Gabit, Bee Wong, Alex Wong, Charles Loo, et al ought to do well on the Adventure R in Rimba Raid.