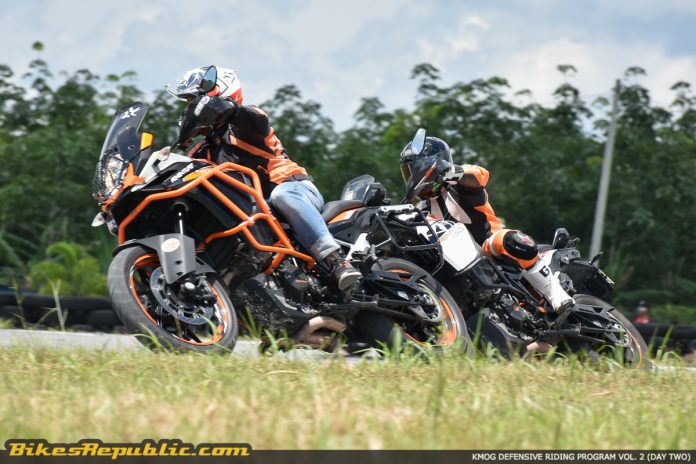 KMOG DRP moved to the UniMAP Circuit for Day Two. 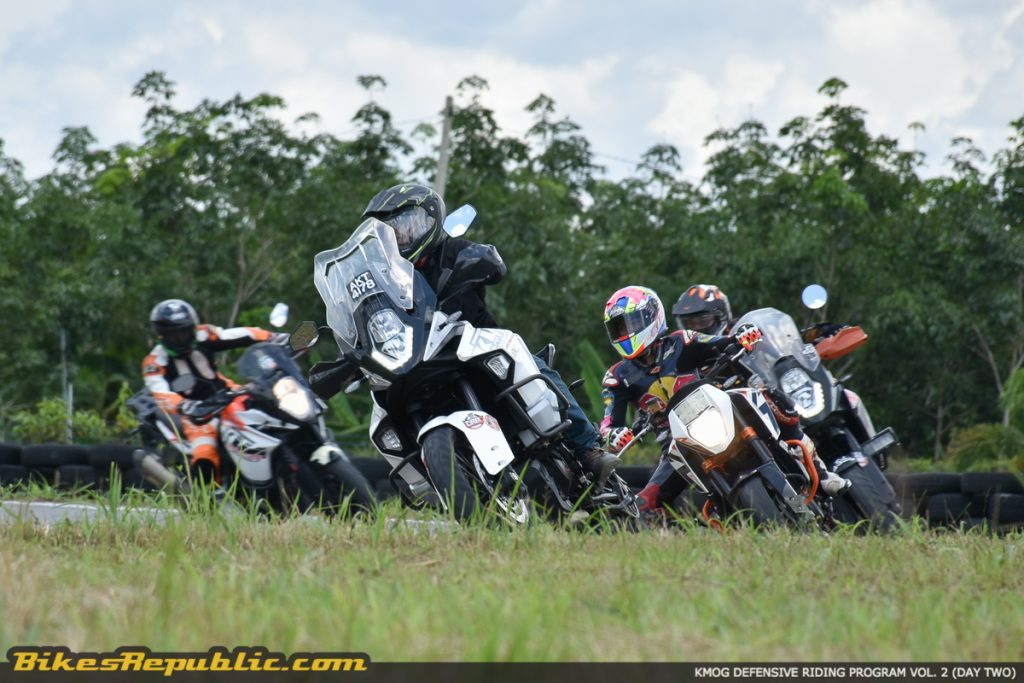 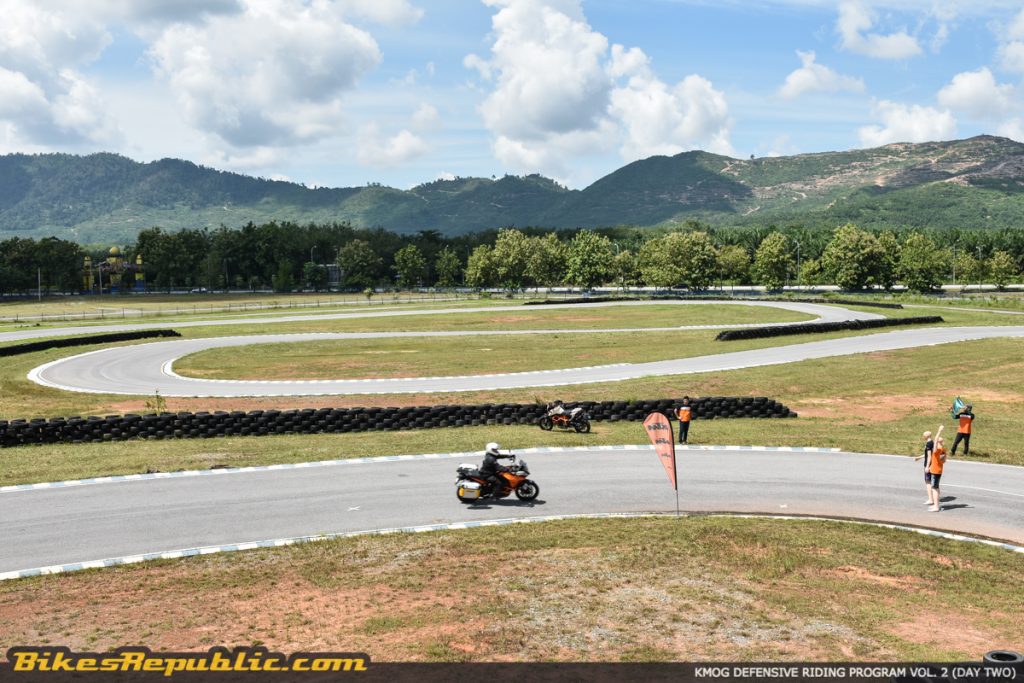 KTM Malaysia’s support crew were on-site and brought along an air compressor. They performed checks on KMOG participants’ motorcycles to ensure that they were in the proper riding condition on the track. They also lowered the tyre pressures on the participant’s bikes for high-speed riding later in the day and re-inflating them before the riders rode home (hence the compressor). KMOG had also called upon an ambulance and paramedics to standby at the track. 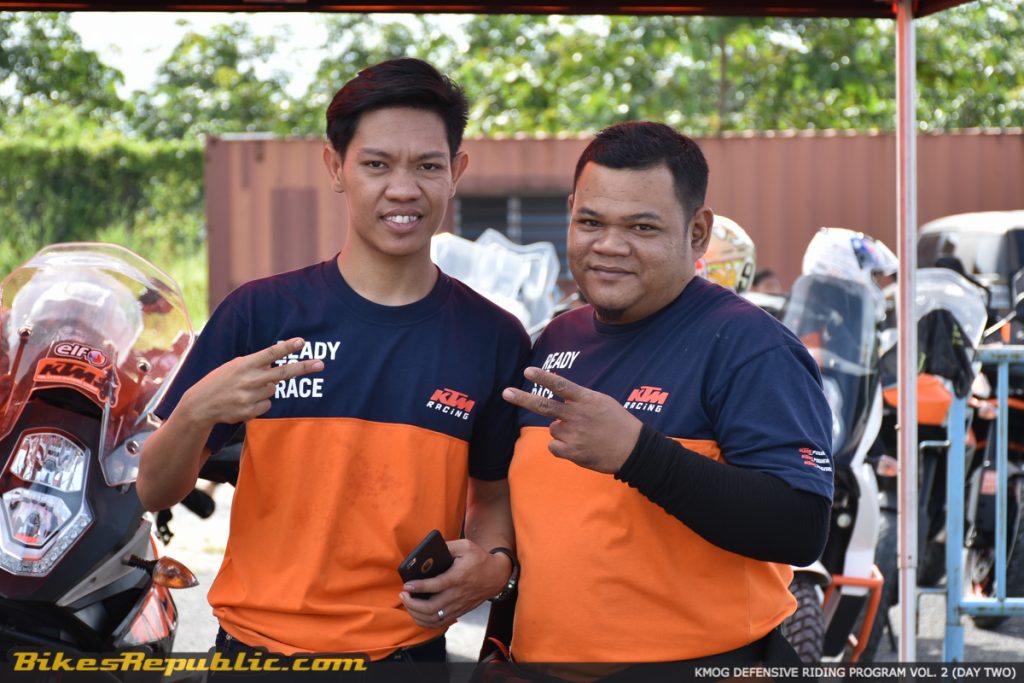 The rearview mirrors on the motorcycles were turned to face forward, to avoid the KMOG participants from glancing behind while tackling the circuit. 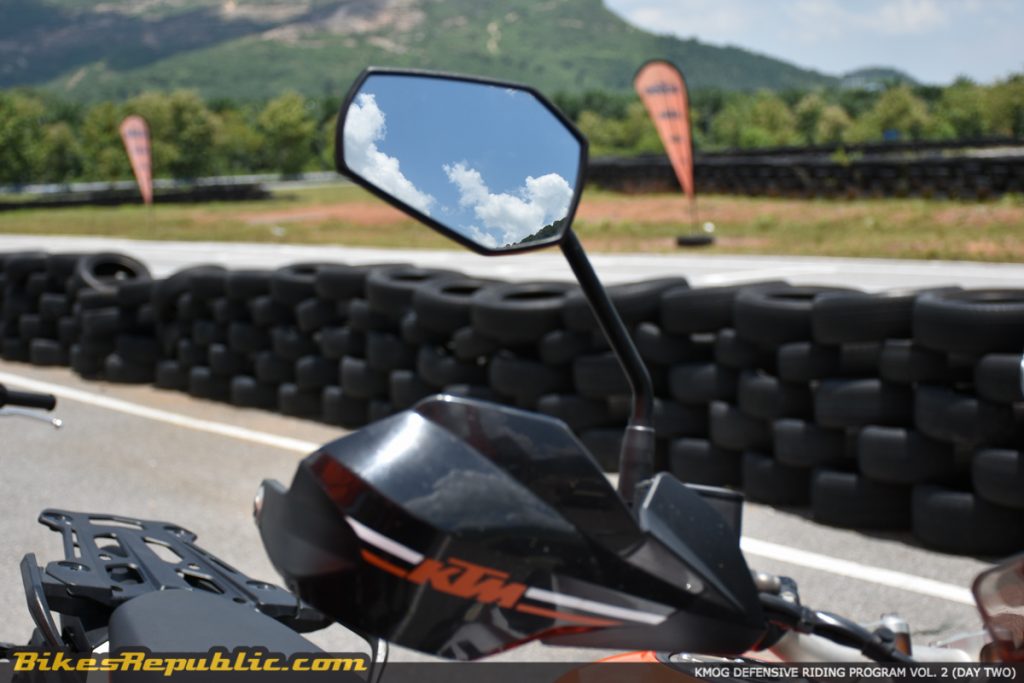 The day started off with the program briefing by Ong Soo Yong, before proceeding to the Emergency Braking module. 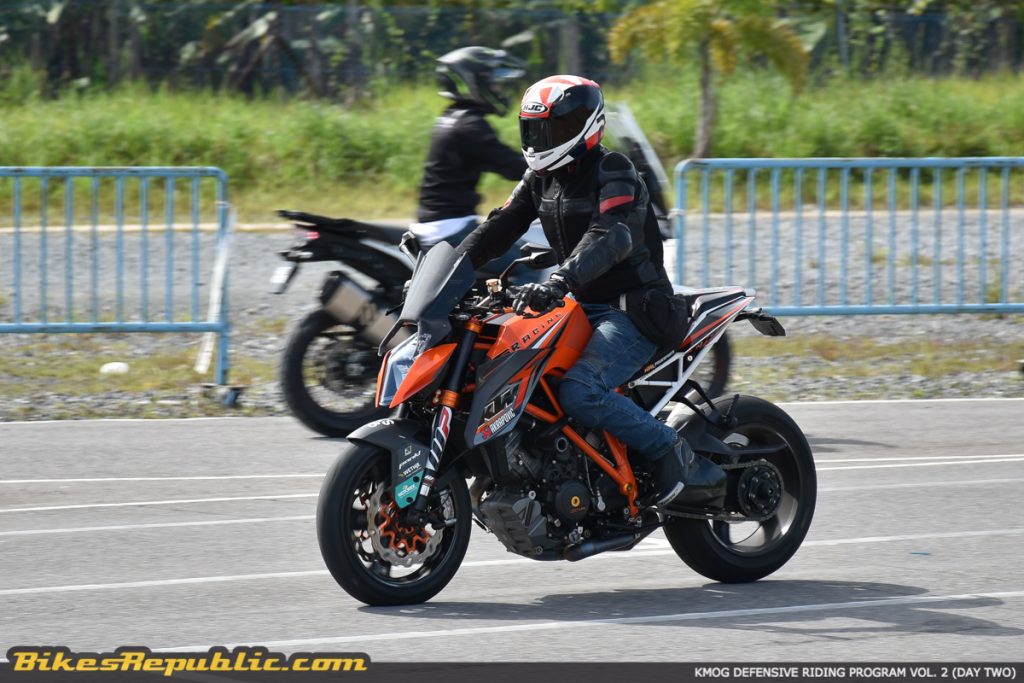 The term emergency braking will surely bring back memories of our motorcycle license exams. We were taught to slam down on the rear brake only to skid the tyre to a stop, without applying the front brake and without an explanation to its purpose. Conversely, DRP’s module taught the riders to lock up their brakes to activate their motorcycles’ Anti-lock Braking System (ABS) to familiarize themselves to the sensation of a pulsing brake lever and pedal. 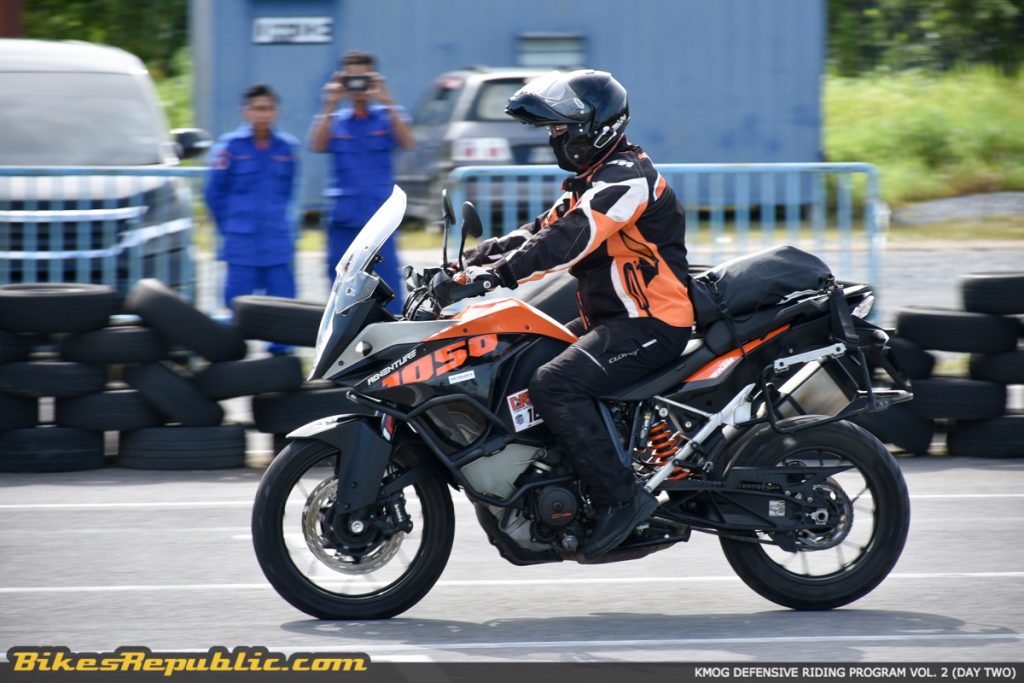 The class adjourned to another section of the track afterwards for the Emergency Avoidance portion. 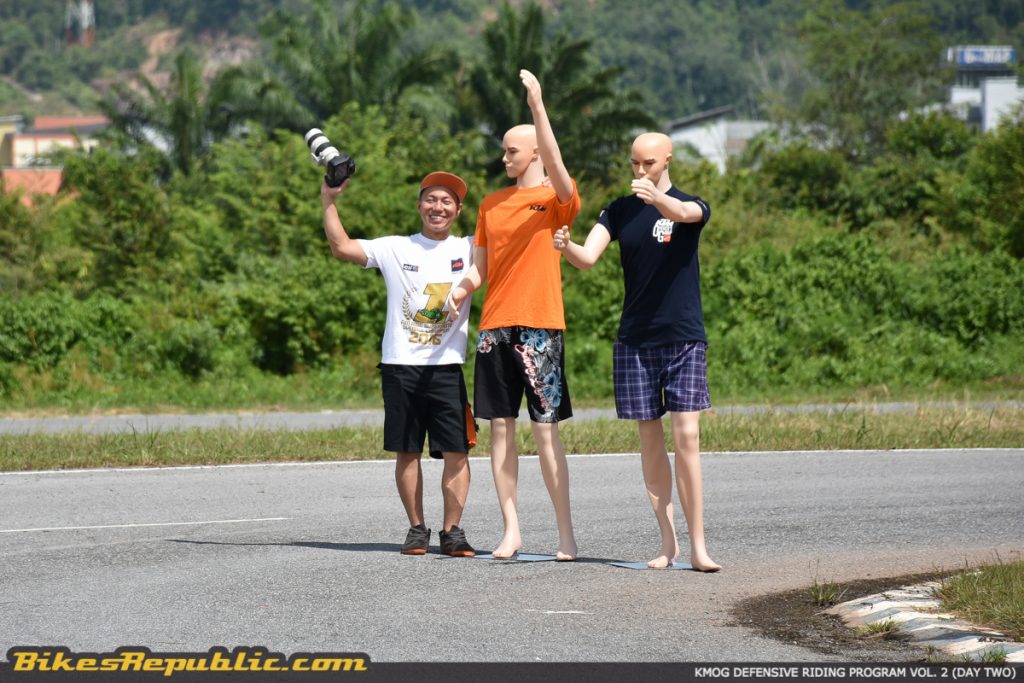 The drill called for the riders to follow a pre-marked line into a corner, where two mannequins were placed further into the curve, directly in the motorcycles’ path. There was a final marking on the road before the dummies where the rider could only brake and swerve away at the point. 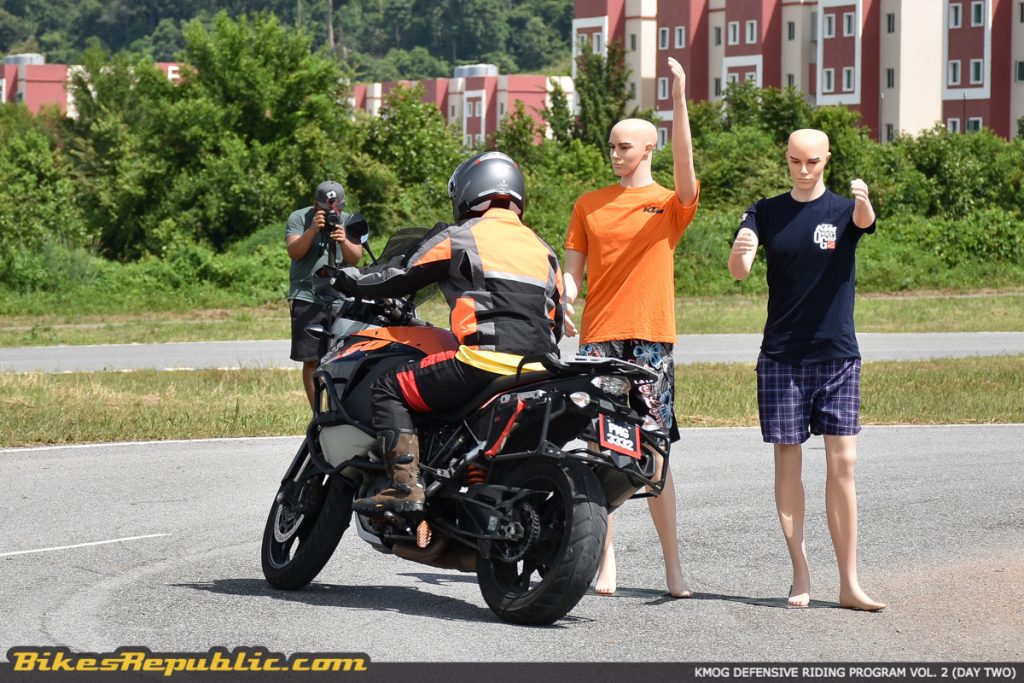 This exercise illustrated the techniques of braking and avoiding unexpected hazards on the road. It was appropriately carried out after the emergency braking session, as they could then apply the lessons learned. 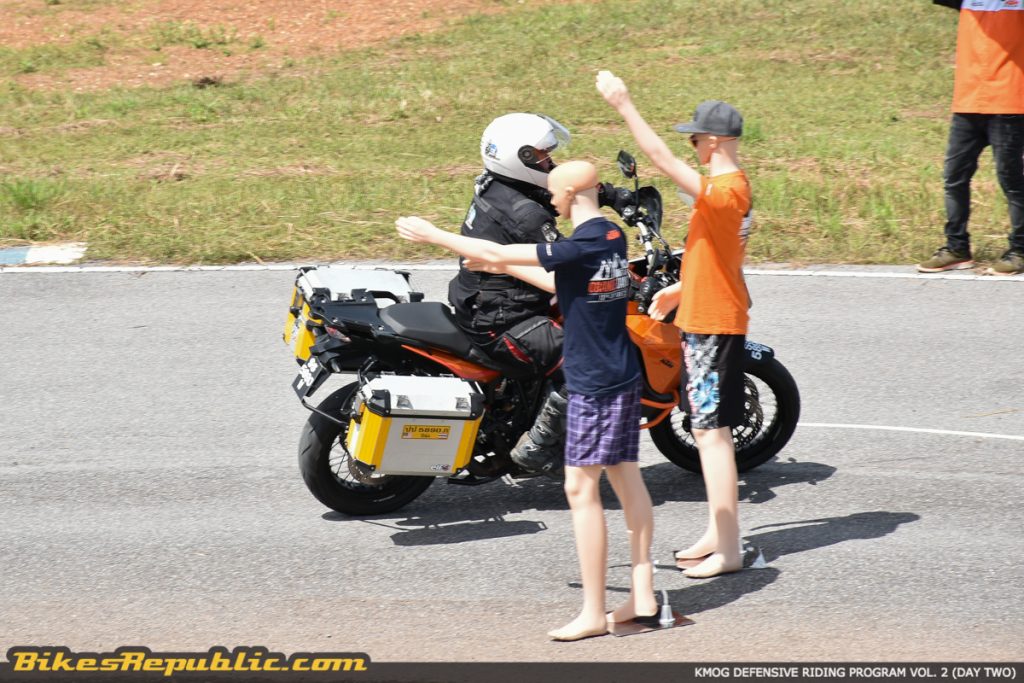 Next was the module named Analyzing Apex, Entry & Exiting Turns, Acceleration & Braking Points. As the name suggests, it sought to hone the participants’ skill of determining the correct lines they should take through corners, besides how to accelerate when exiting and brake as they approach corners. The UniMAP Circuit was a great setting for learning this set of skills as it featured corners of every type, plus elevation changes.

The plan called for the factory riders Ahmad Idham and Muhd. Izham to lead the riders, and Gabit in the trailing position. The participants will then trace the riders’ braking points, lines through the corners and acceleration points. To provide equal opportunities for the participants, the group of 17 were broken into 3 groups. Participants trailing the leaders were rotated by letting the last two overtake to the front of the pack, behind the factory riders. 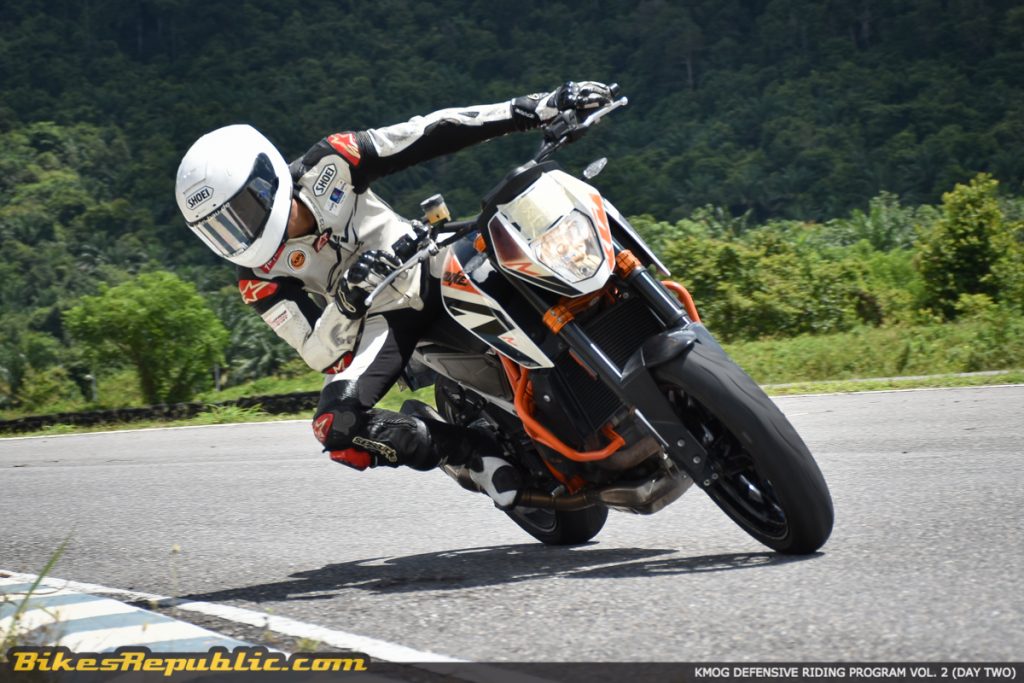 But first, Gabit, Ahmad Idham and Muhd. Izham hit the track for a demonstration run. It was an awesome display of speed and riding skills, while serving as a practice session for them, since this was the first time they’ve visited the track. 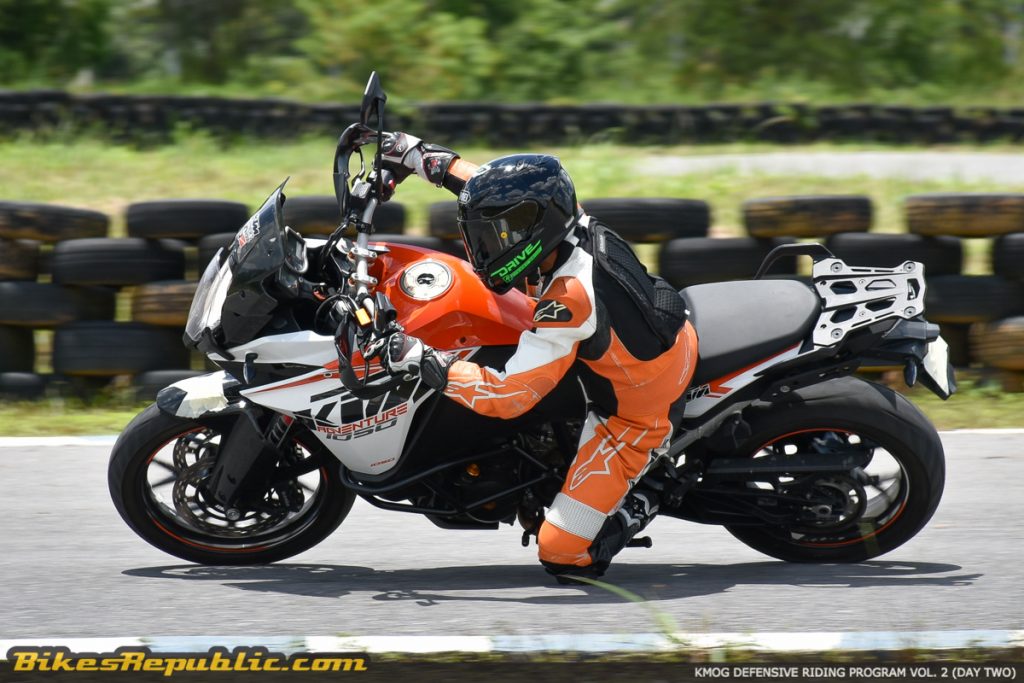 KMOG’s riders went out on track after lunch. Each group was allotted five laps per session of the circuit. 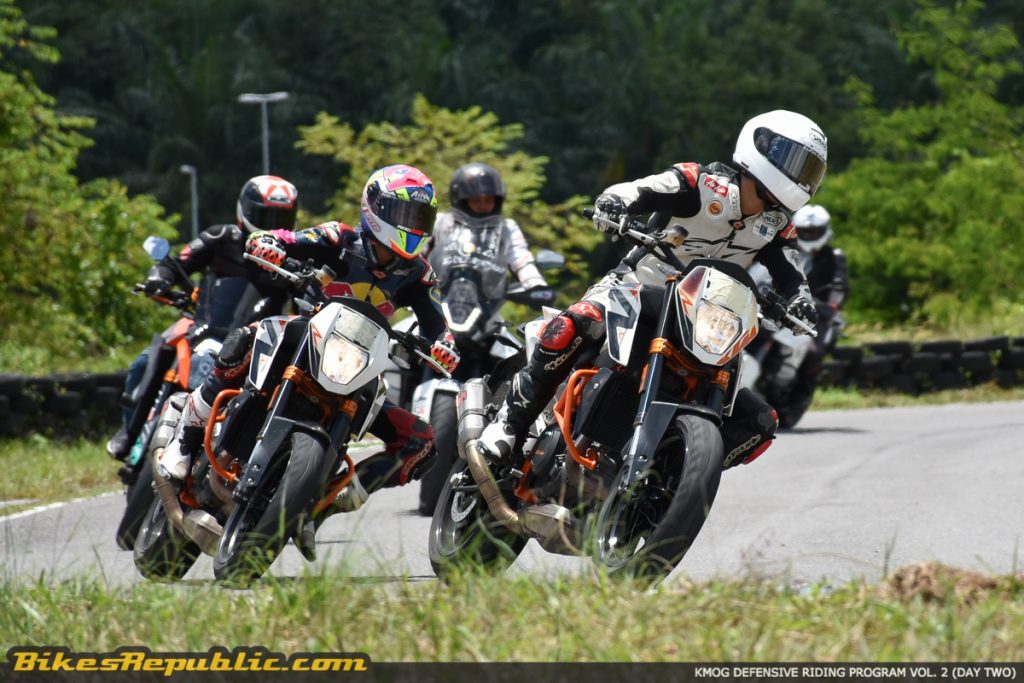 Gabit Saleh then went on track to perform in a stunt show, wowing everyone with his variety of incredible burnouts, stoppies and wheelies. 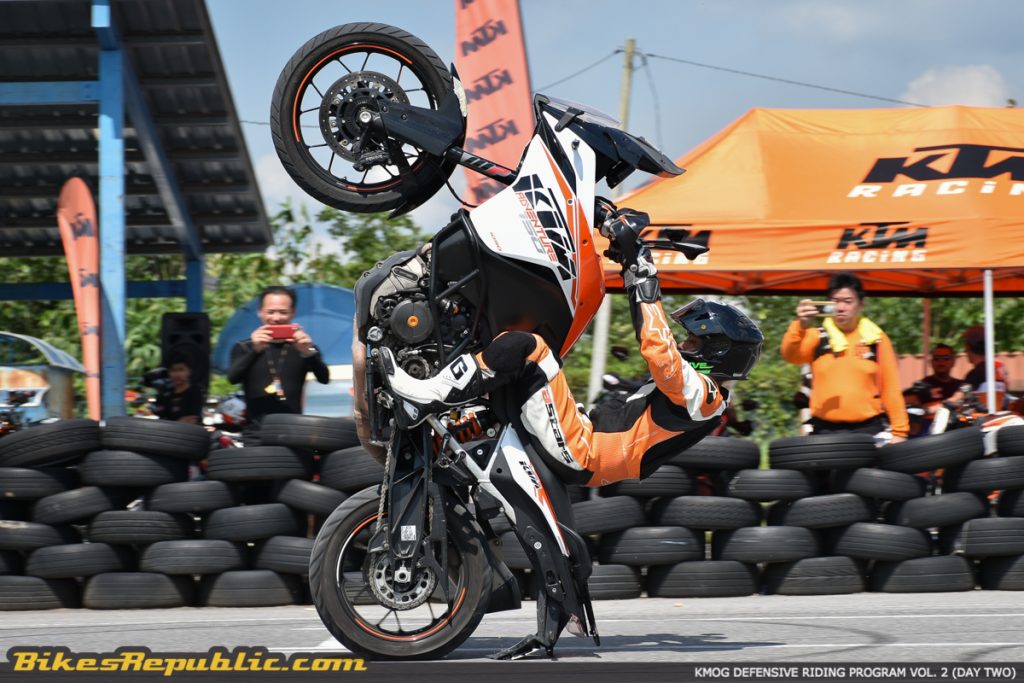 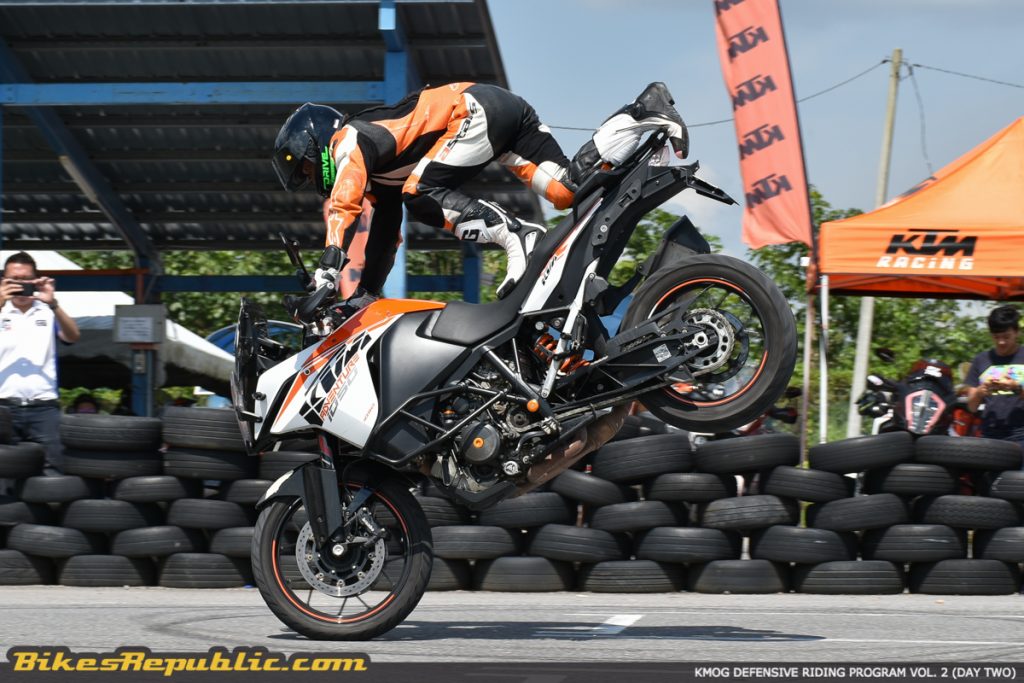 The track was reopened for free practice to allow the KMOG members to familiarize themselves to the track and apply the lessons learned throughout the previous sessions. The participants were apparently fast riders and went increasingly faster as the session wore on. There’s no better pleasure than the opportunity to ride around a windy piece of tarmac where there are plenty of space for mistakes, and no road hazards such as wayward traffic, pedestrians, animals. Only a racetrack could offer such luxuries. 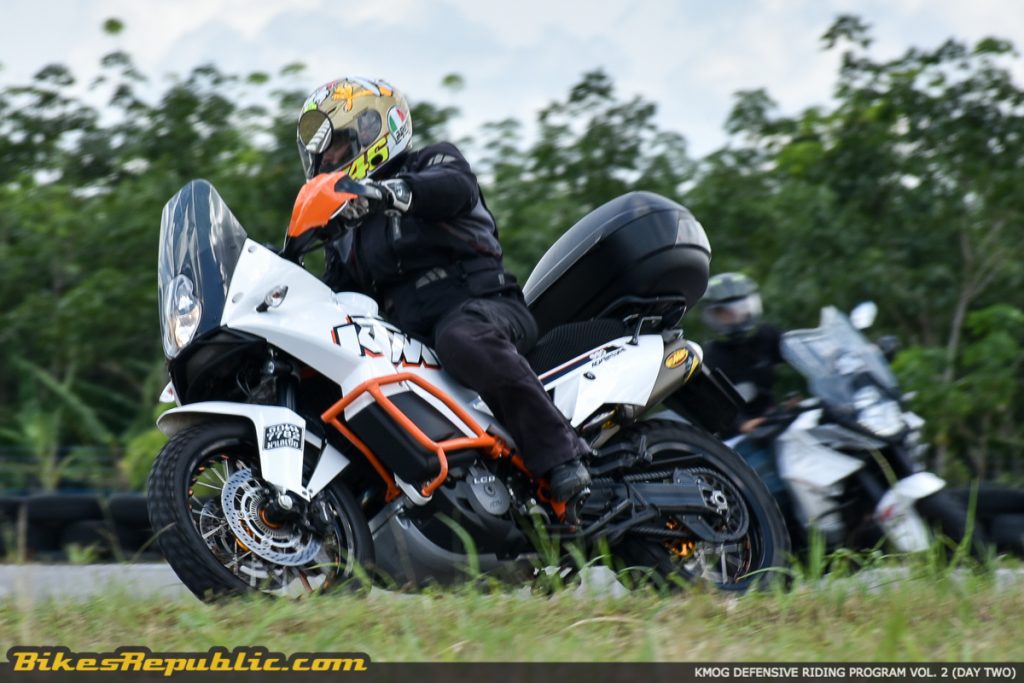 They were soon called back to the paddock for a rest before the last event of the day, known as the KMOG-GP began. 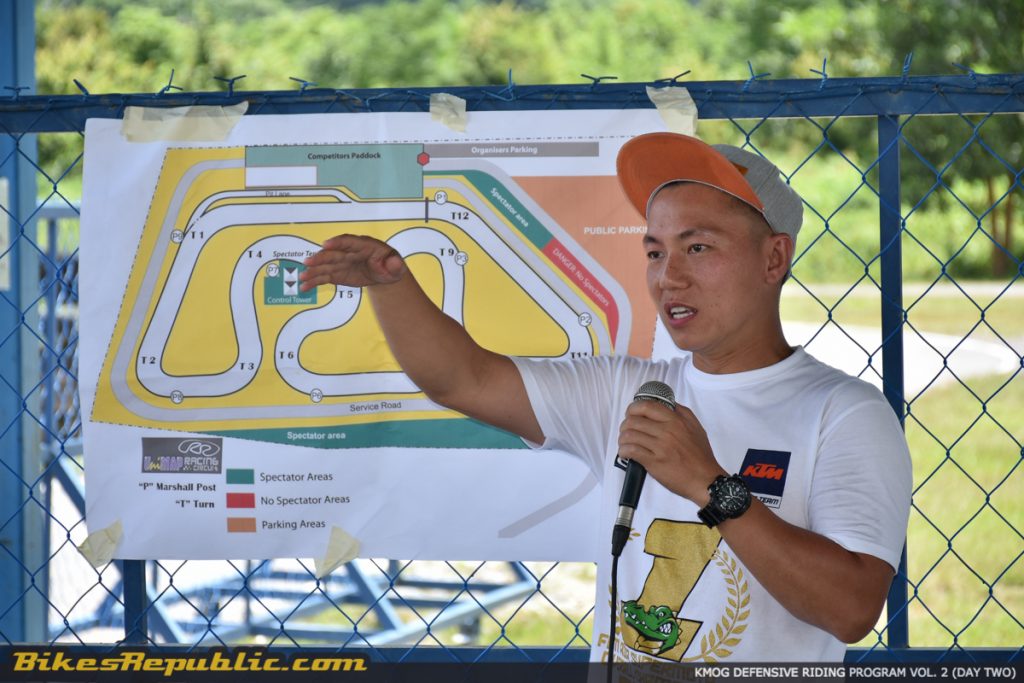 Another round of briefing followed prior to the KMOG riders were let loose on the track. Although named KMOG-GP, it was to see who could complete the most laps in the allocated 30 minutes. It was hence an endurance rather than an all-out sprint “race.” KTM’s factory riders also joined in. 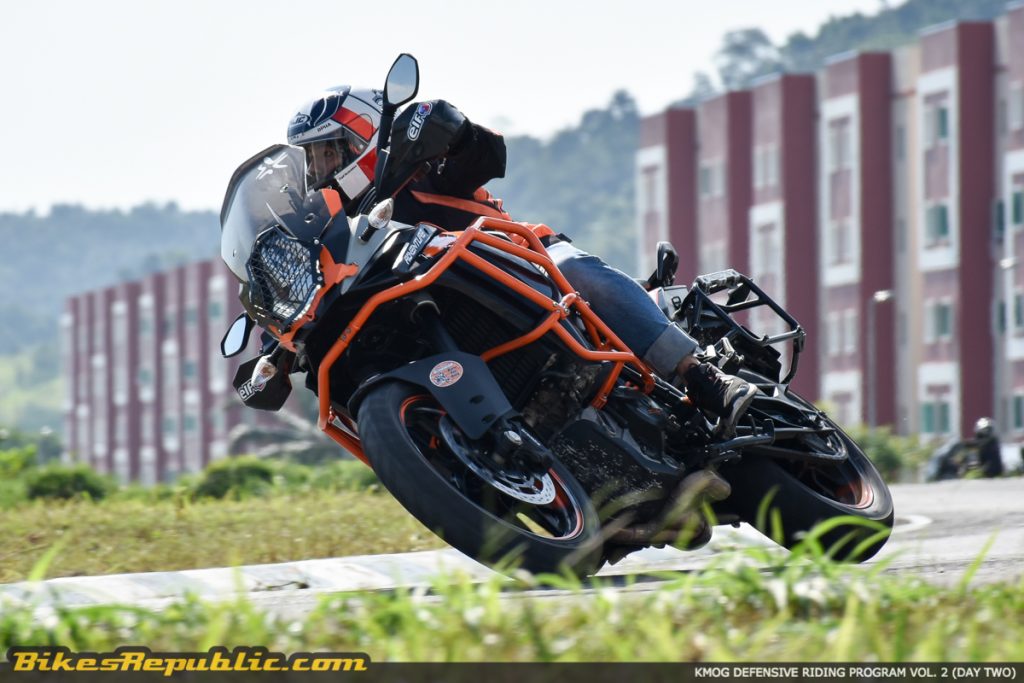 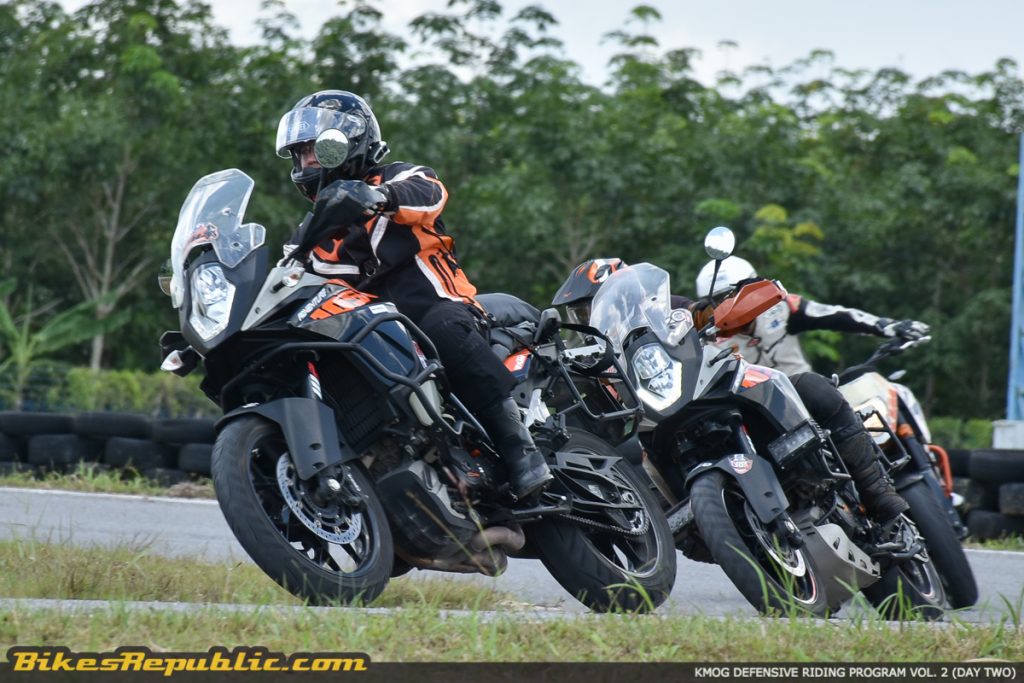 Prior to the end of festivities, prizes were awarded to the participants, although everyone received the gold-coloured course completion sticker. 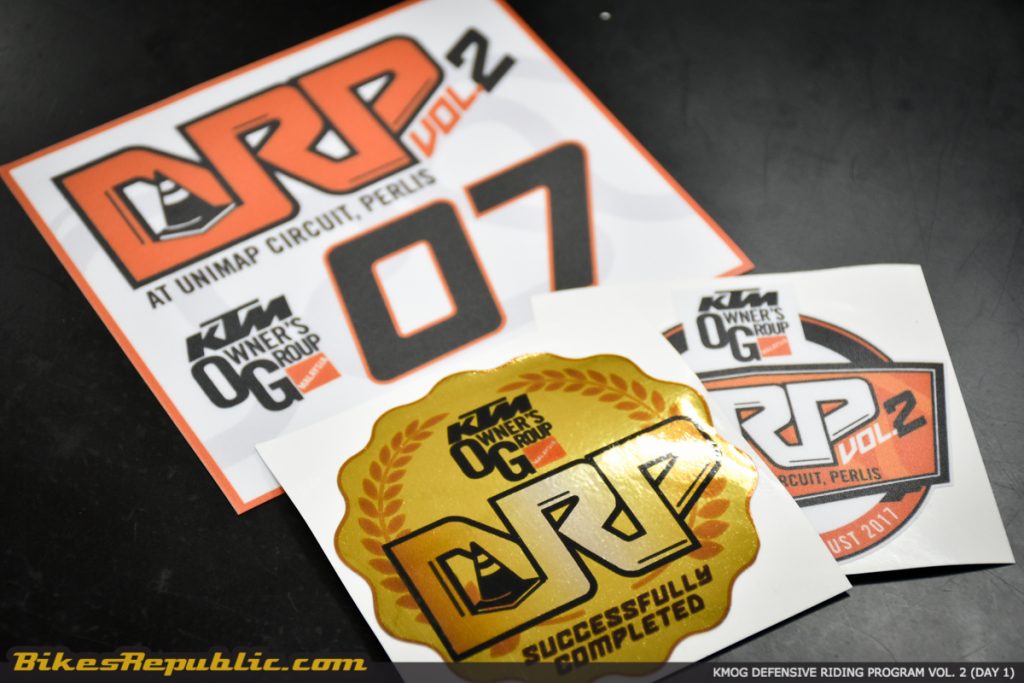 There was much anticipation, laughter and enjoyment among the KMOG participants throughout the event. The KMOG riders were a friendly lot. Perhaps it is not wrong to say that not only did they improve on their riding skills, but also their camaraderie. 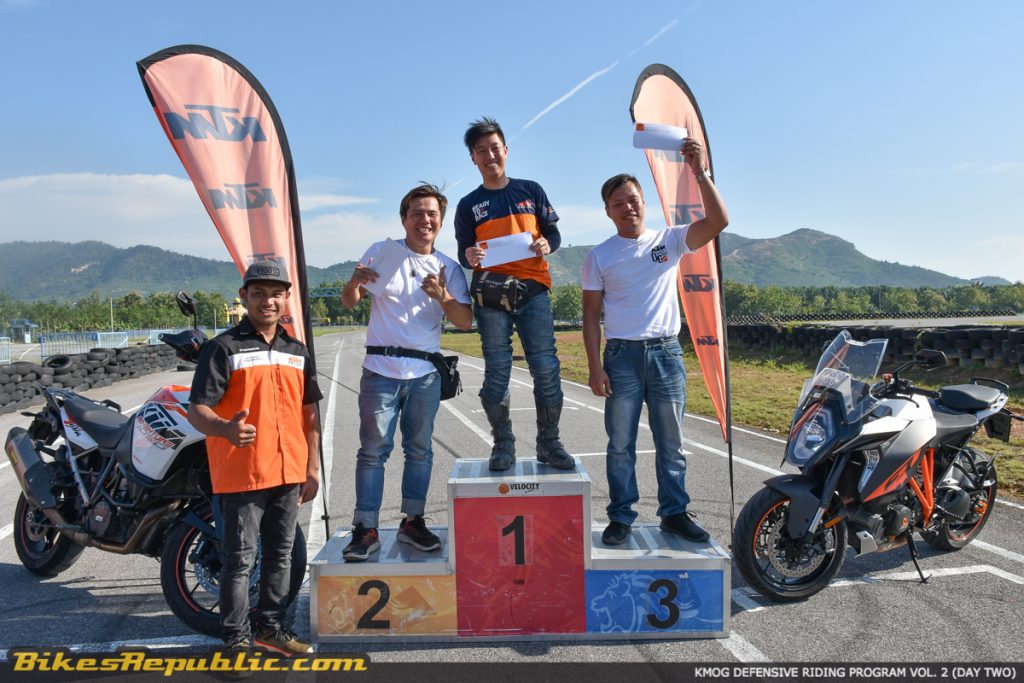 It was also revealed that KMOG members will be expecting a ride in Borneo, from Kota Kinabalu, Sabah to Kuching, in Sarawak in September 2017. If so, KMOG’s Defensive Riding Program will surely equip the riders with fresh sets of skills and confidence to tackle the ride. 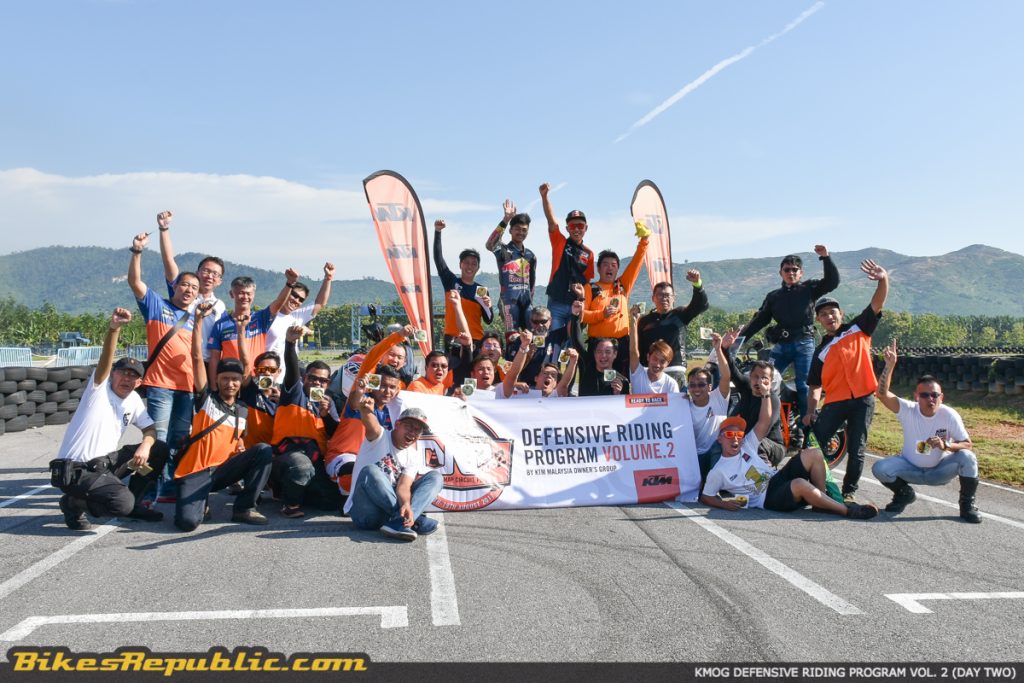