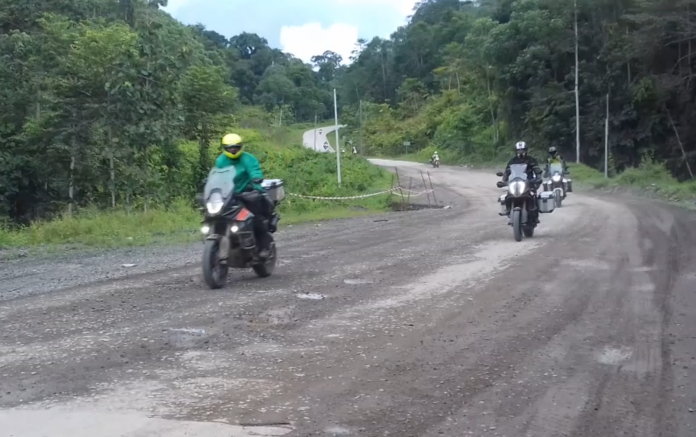 4th November 2017, Sandakan, Sabah – Anticipation, excitement, fear, doubt, sleepiness was on the faces and in the smiles of the KMOG Borneo Ride 2017 participants as we gathered for breakfast at 5am.

As mentioned in the earlier parts of our coverage, this was possibly going to the most epic day of this epic ride. We were to cover more than 640km today, first from Sandakan to Tawau past Lahad Datu, and finally to Keningau through Kalabakan.

While 640km is an easy target for seasoned Malaysia-Thailand riders, it’s not about the distance that scared us. Instead, it was because of the road conditions we have encountered thus far, in an unfamiliar territory.

Indeed, Ong Soo Yong had briefed us during the welcoming dinner that this would be the toughest leg of the KMOG Borneo Ride 2017.

For the first time, we left the hotel when it was still inky black. But the sun came out soon enough and we were seared by the sunlight by 9am. A few riders were concerned about having to ride under such weather for the remainder of the route. The road was thankfully smooth between the two towns.

We reached Tawau at 11.30am, well ahead of time, which took the restaurant owner by surprise. The staff scrambled to ready the tables and chairs, while the cooks jumped into overdrive. They didn’t even have water or Chinese tea in the beginning. 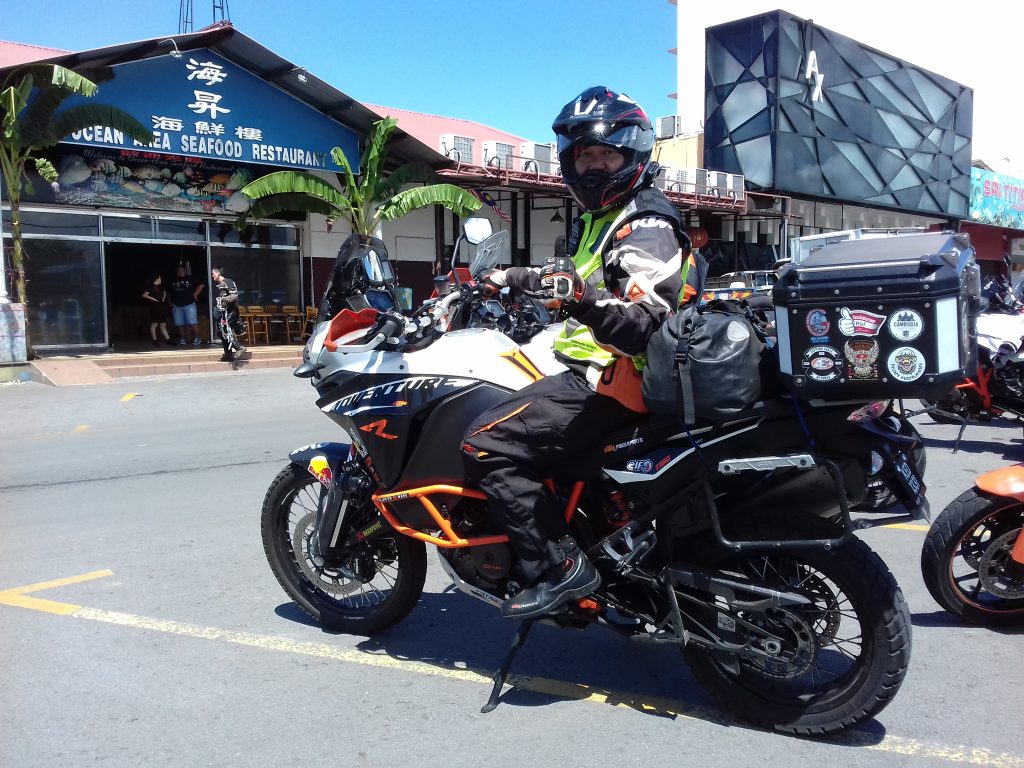 The sun had come out in its earnest by then, hitting 41 degrees Celcius, and no one could stand out in the open for more than five minutes. We charged into the restaurant like a swarm of angry bees. 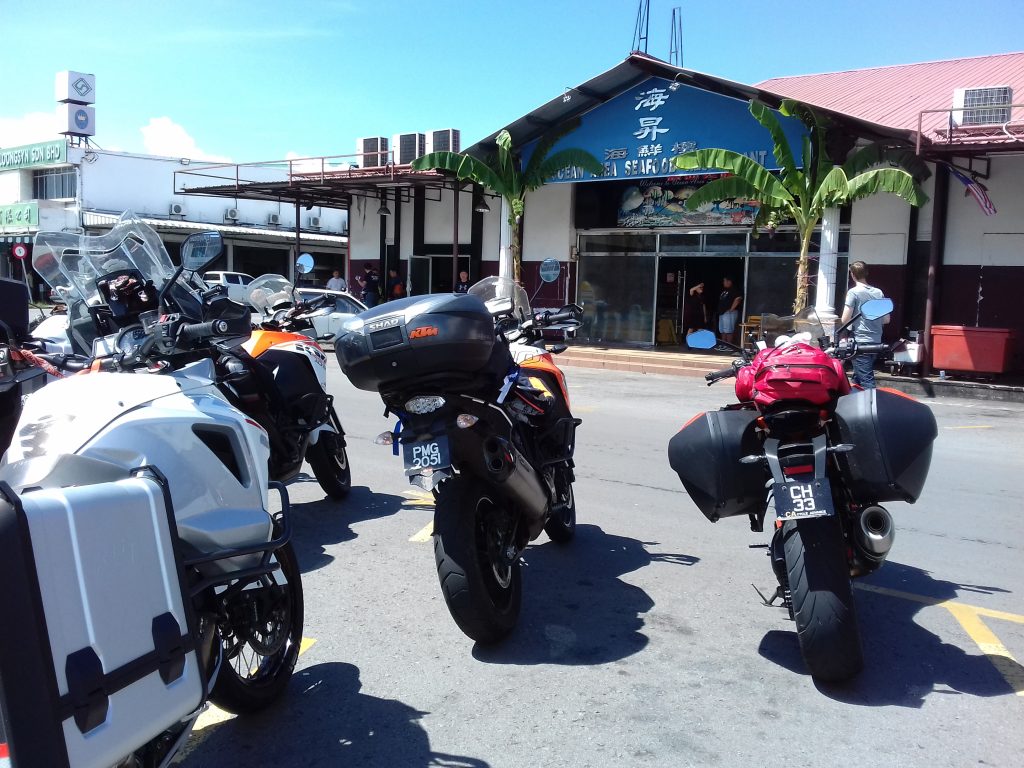 One of the bikes had picked up a puncture, which sent the owner and Chris O’Connell out on a hunt for a tyre shop. So, all we could do was wait until they returned.

When we left the restaurant and out of Tawau, the sky ahead had turned ominously black and we hit a heavy rainstorm about 10km from the town. We stopped at a petrol station further up the road while taking shelter at the same time. 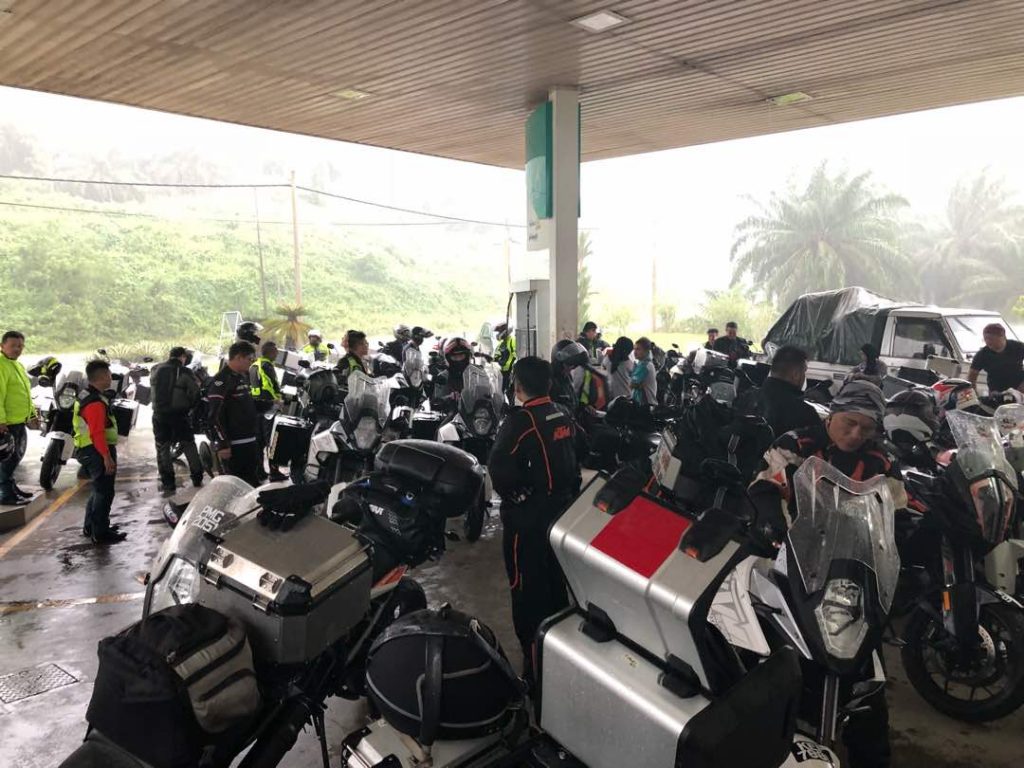 With every bike filled to the brim, a few of us donned our rain gear, while a few didn’t because they didn’t bring theirs. We pushed on anyway, all the while being lashed by the relentless rain.

The rain stopped after a few kilometres but dark clouds still dominated the horizon, so I kept the rainsuit on despite getting hotter and hotter underneath.

We were led by the marshals through a small village and ended up at an old Petronas station in Kalabakan.

It looked as if it had been built when Petronas first started business and has never been refreshed. The two 990 Adventures had to top off their tanks, unless they run out of fuel just outside Keningau and this was the last petrol station. 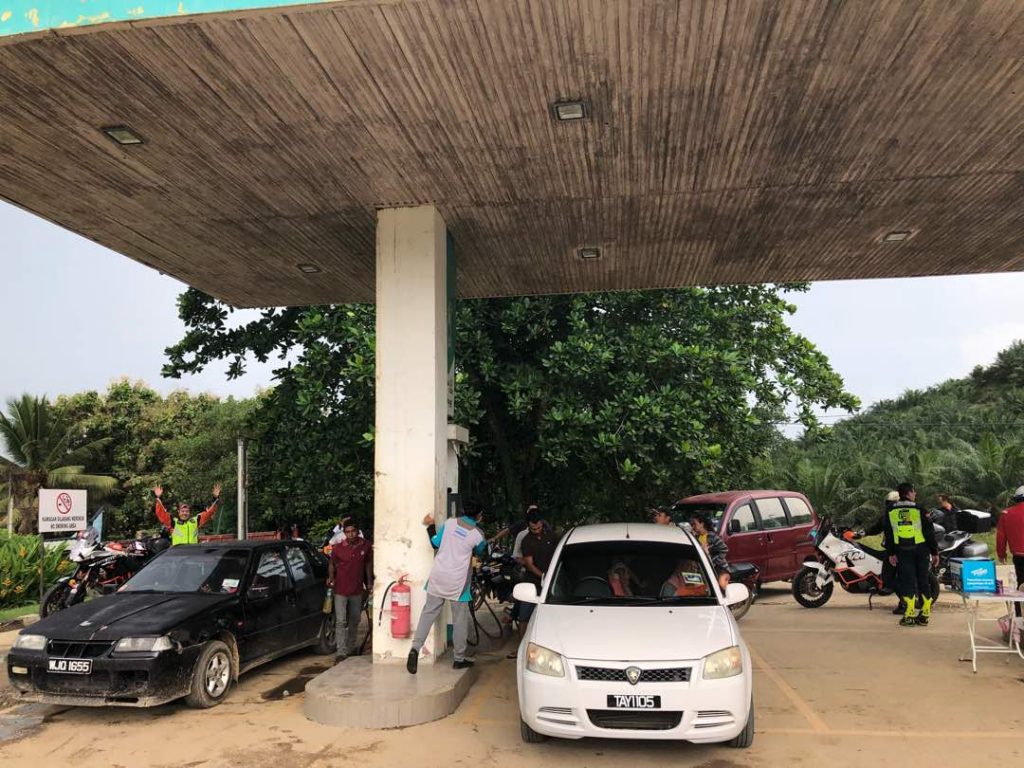 It started to drizzle again as we left the station. We rode through an oil palm plantation and it was offroad. The route was pockmarked with so many holes it looked alien. 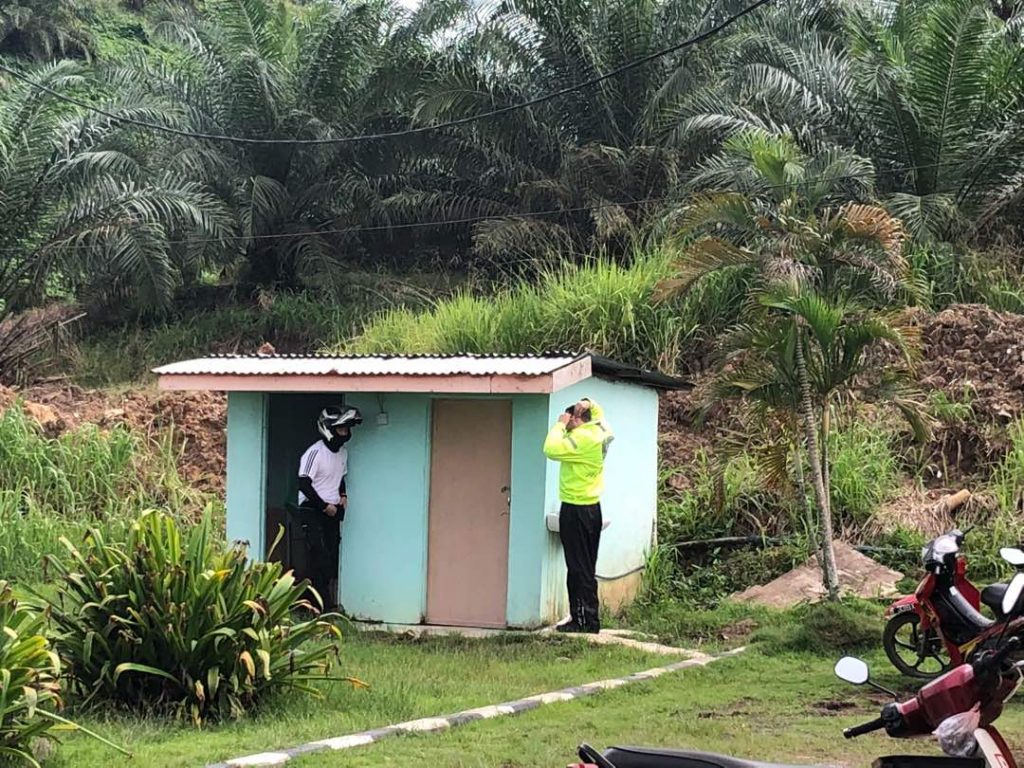 We rode along at a brisk pace. I noticed the scenery and vegetation had started changing from flat farmlands to high hillsides.

Soon after I noticed an orange coloured sign that said, “AWAS. KAWASAN TANAH RUNTUH,” (CAUTION. LANDSLIDE AREA.) followed by another sign of the same colour with just the exclamation mark. The lead marshal started pumping his left arm up and down furiously, and it soon became apparent that the road had become “no road.”

An entire section was nothing but gravel and mud, as if the tar seal had been scraped off. Through MX training, my instinct kicked in and stood up. The 1290 Super Duke GT’s semi-active suspension was still set to “STREET” and I feared it may be too bumpy.

Instead, the bike which was meant to be a road-only sport-tourer took it all in its stride. I took it painfully slow in the beginning but it soon showed itself as being more capable than that as it allowed me to swerve past water filled potholes. It rolled over the loose gravel and mud as without drama. (It also helped that I stood up, of course, so do that when you have to ride over poor surfaces. Check out our tips for adventure riding here.)

It was tarmac again after that, followed by another no-road section, and another, and another. And it started to pour down again. This route is often used by logging trucks, hence the level of damage we encountered. 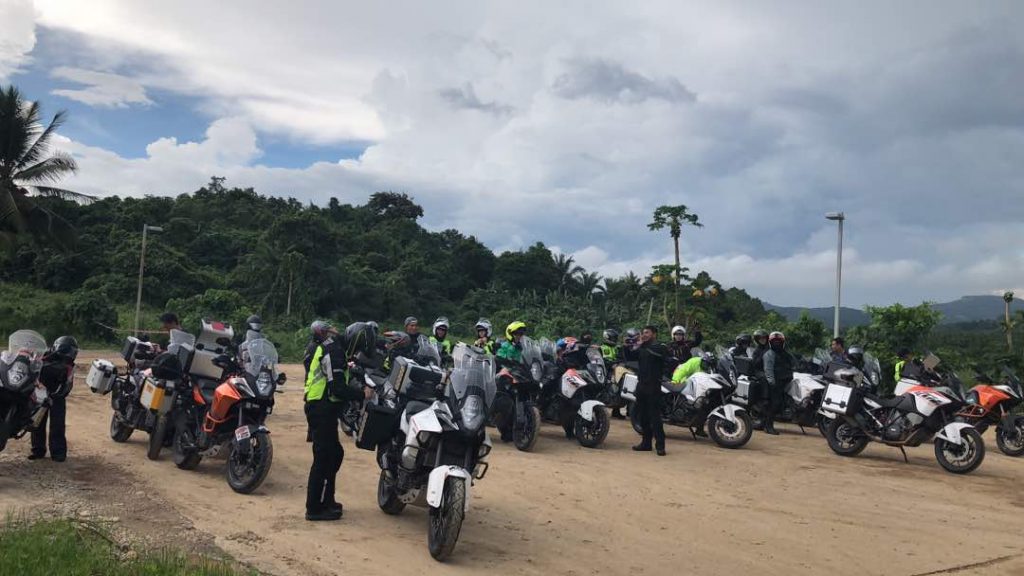 The rain came on and off as we slogged through one section after another until I lost count.

I started to experiment with the GT as we rode along. I had switched the WPs to “COMFORT” to let it soak up the bumps better and RIDE MODE to “RAIN,” for a smoother torque output. In the tougher no road sections, I left the transmission in third gear, let go of the clutch and regulated the throttle.

In the meantime, the rain had gone constant by now. It’s nearly 5pm and light’s starting to fade. I’ve stopped to record a video as a few bikes passing through a rough section and I was now left alone (although the last man was well behind).

I came up to an area where it appeared to be a small stop for the logging trucks. A dog wanted to cross the road from left to right, but it stopped when it saw me, so I swerved to the right to give it some room. But it suddenly bolted into the middle of the road and into my path. I grabbed the front brakes and the bike slowed so hard I felt like I was doing a push-up with 200 kg on my back. Even then, the brakes didn’t lock and trigger the ABS, plus there was still much room left for braking. Amazing!

Believe me, I was tempted to stop. My Dainese Rainsun jacket has two thick layers and the rainsuit over it but it was still cold. I could only imagine what those without rainsuits were going through.  And for the first time in Malaysia, I switched on the handlebar grip warmer to HIGH. However, I pushed on as I didn’t want to be riding out here in total darkness.

I soon saw a bike ahead and made it out to be the 1290 Adventure T ridden by Captain Nanda. We buddied up. There’s a certain relief to ride together with someone else, sometimes even with complete strangers when the going gets tough.

We finally made it to Keningau’s city limit. We stopped and waited for the rest to catch up. 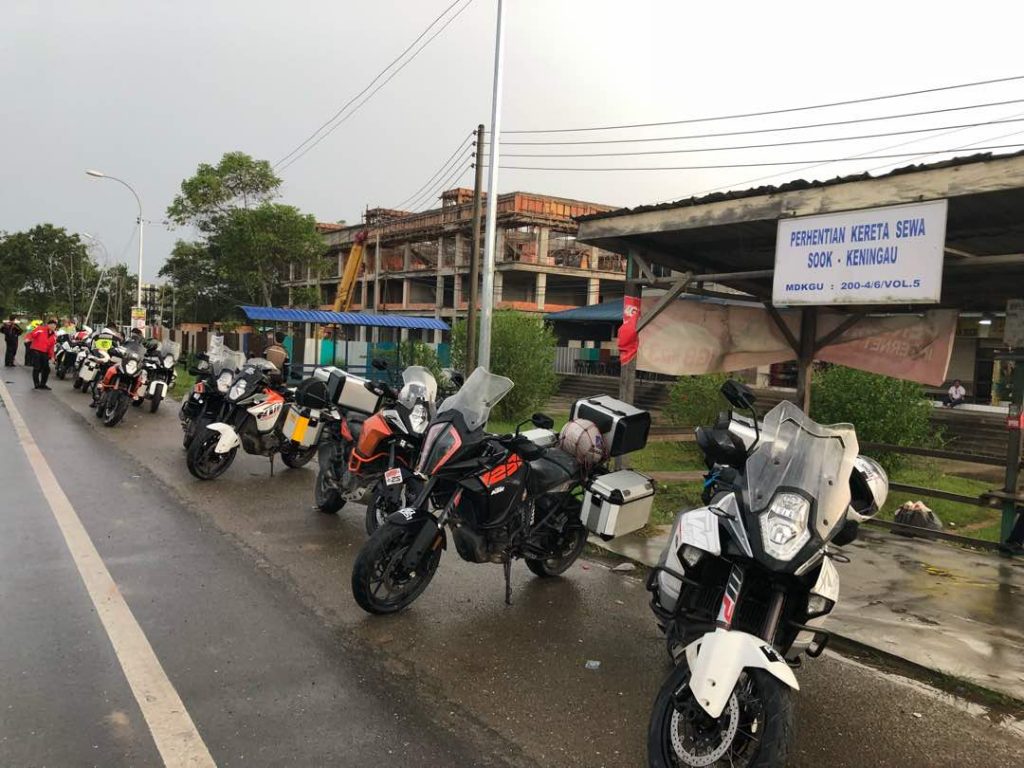 The final leg into Keningau was awesome, featuring cambered sweeping turns. All of us cut loose. The Super Adventure S in front of me kept throwing sparks from its panniers through the corners!

We stopped for dinner at the beautiful Mee Woo Resort & Spa’s restaurant, but the service sucked. Yes, you read that correctly. First, they directed us to park at the entrance, then chased us away to park elsewhere after we’ve sat down to eat. Apart from one sweet usher, none of the crew ever smiled or greeted us. But never mind, because we were dirty, hungry and tired. The mood became increasingly jovial as hot food and drinks entered our systems. Everyone was relieved that toughest part of the journey was over.

From there it was a short three-minute to the hotel.

We did a final tally. Not a single bike had broken down despite all that trashing. Apart from a minor crash due to distraction (rider okay), no one had gotten hurt and that was the most important news.

Then all of us crashed into our beds.