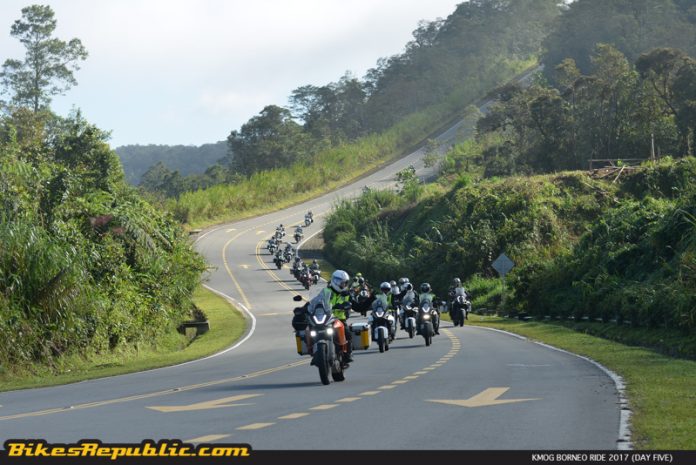 Keningau, Sabah, 5th November 2017 – We had thought we’d be allowed to sleep in today after yesterday’s “adventure”, but we were told the briefing will be at 7am. 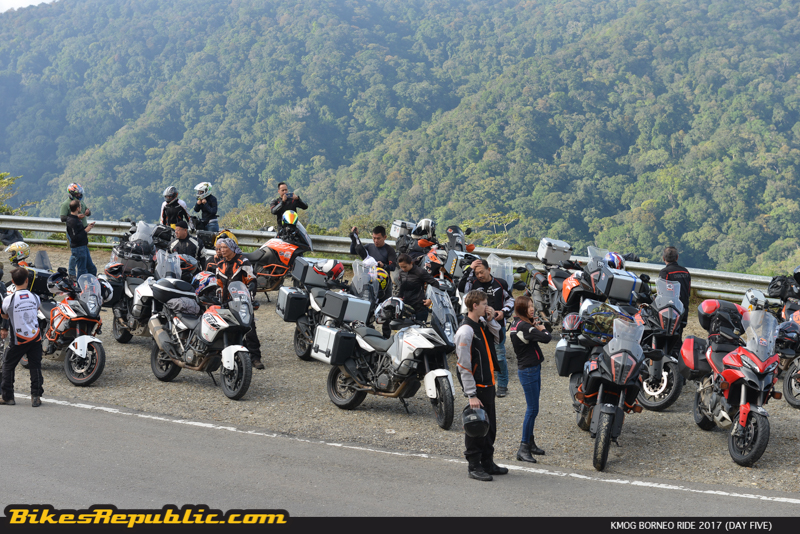 The early flag-off time was because we had planned to ride over the Crocker Range in the early hours when it was covered in mist and possibly fog. Needless to say, riding here was an item in my bucket list.

I’ve heard much about riding across the Crocker Range from riding enthusiasts, so I dragged my ragged body out of bed at 6am into the bathroom to freshen up for breakfast. If anyone thought being a motojournalist is easy, consider the fact that I had slept at 4am in order to work on the previous day’s story. Plus, the food from last night’s dinner didn’t seem to be on agreeable terms with my stomach.Anyway, breakfast done, we loaded up our bikes for this beautiful day. But everyone took their time, no doubt still feeling the effect of yesterday’s hammering.

It seems that the Crocker Range was just in Keningau’s backyard (no wonder it was so cold in the middle of the night). We had travelled less than 10km before the road started climbing into the hills – and corners(!). 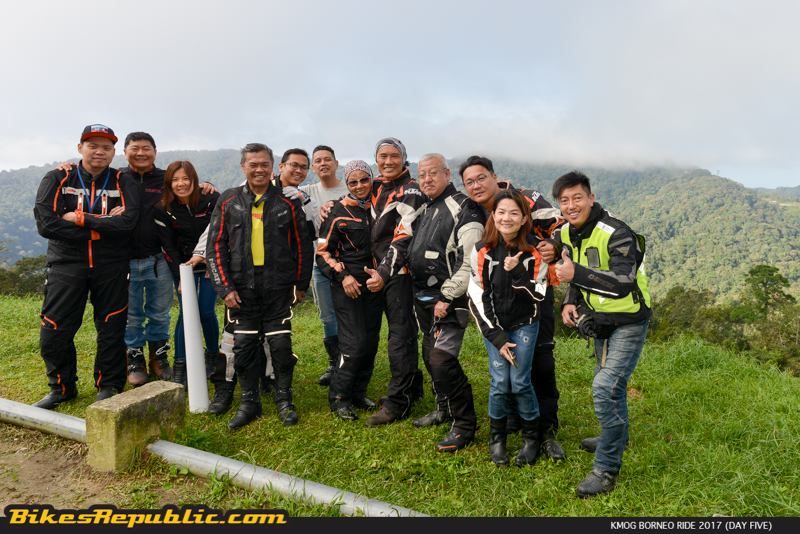 The road here was beautiful, a stark contrast from what we have ridden on so far. The road surface was smooth and grippy, but more importantly and surprisingly, the corners were positively cambered. 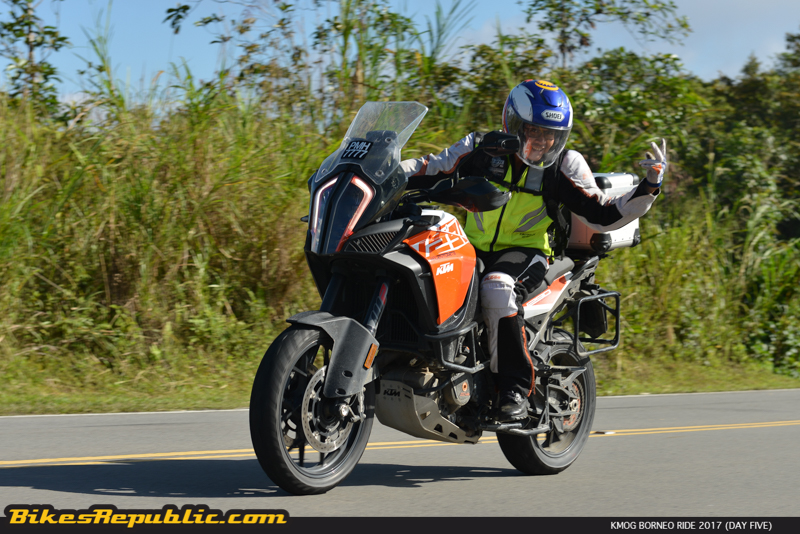 I’m sure everyone in the KMOG Borneo Ride 2017 smiled as we started sweeping through the curves, cool breeze in our helmets and through our riding gear. 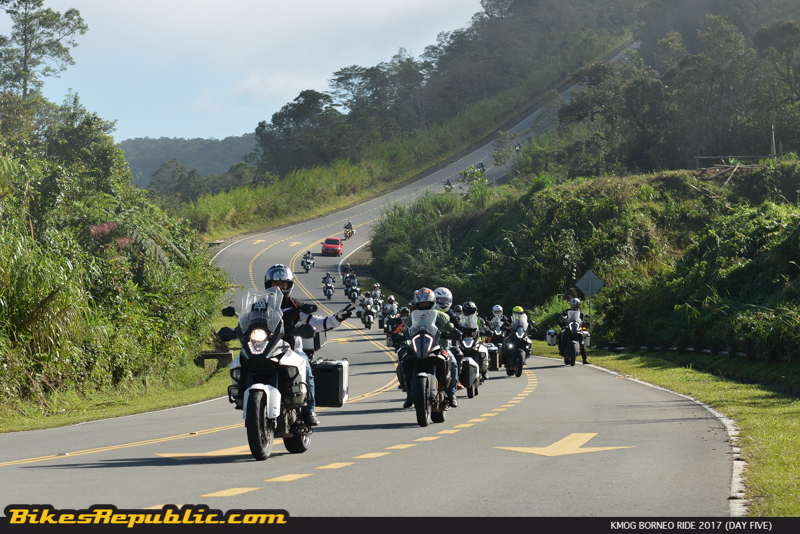 We reached a vantage point and shot photos with the KMOG Borneo Ride 2017 banner. Hills in the yonder were clearly seen. The mist had started to lift. 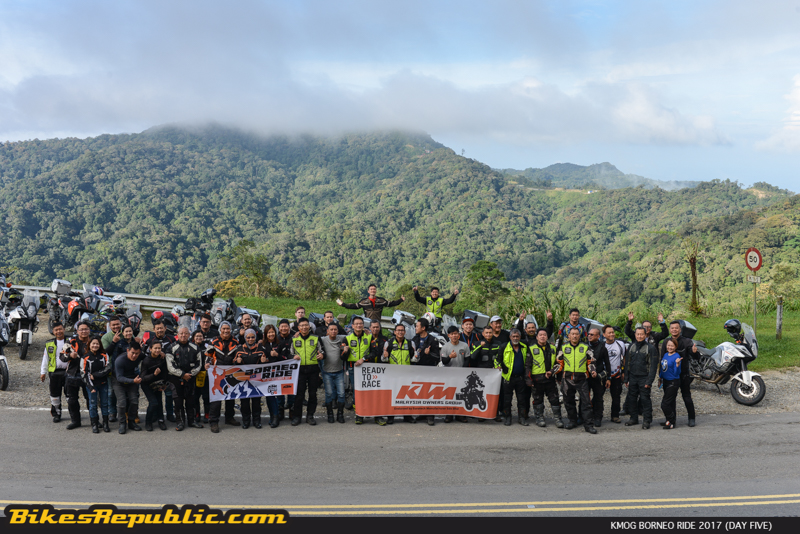 We had so much fun covering this route that it was over before we had warmed up, especially for me on the 1290 Super Duke GT, and it was its natural home. It’s the first time I’ve switched to the SPORT Ride Mode and SPORT Damping. 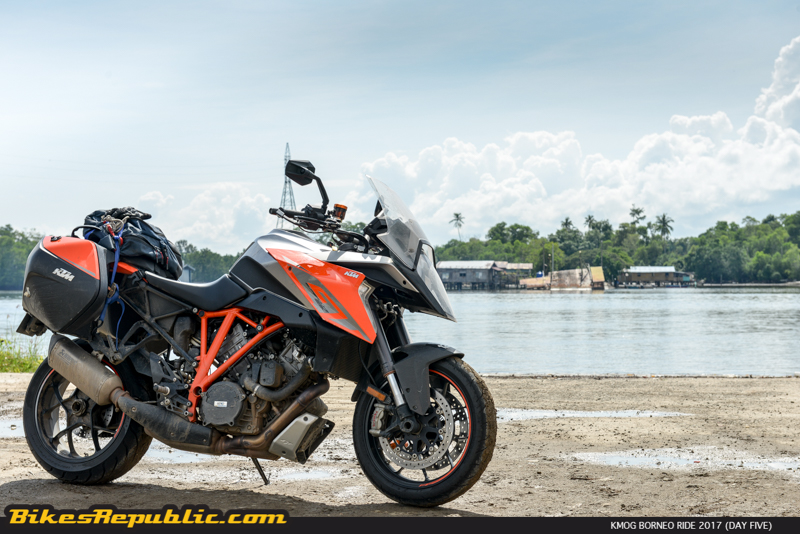 With the cinnamon city (Keningau means “cinnamon” in the local dialect. It’s where the spice is grown and exported) and Crocker Range behind us, the heat started coming back first gradually, then to very hot. Yet, I didn’t feel sleepy or stuffy because the air around Borneo is pretty fresh. 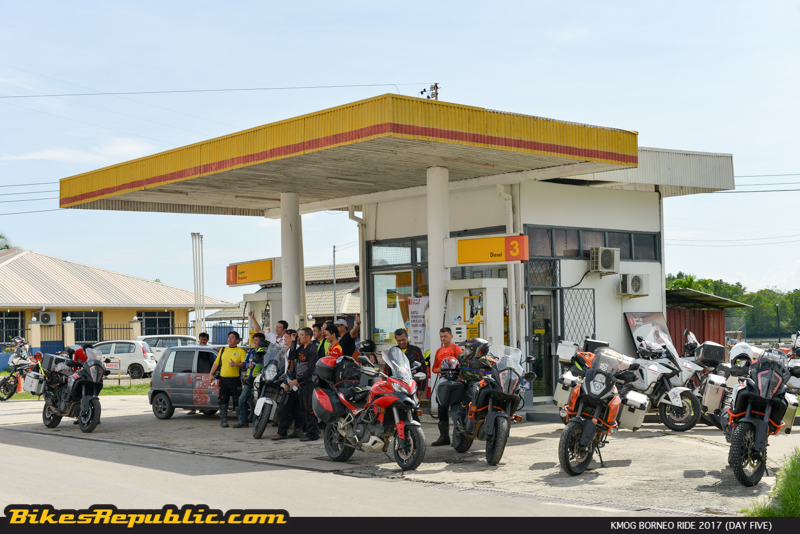 We rode on until it was time for lunch. Pauline from Borneo Excursions had caught back up with us at Kuala Penyu town and we were led to Jonathan Freddy P. Bagang’s home at Kuala Penyu. Jonathan is Penang’s Director of the Ministry of Tourism and Culture Malaysia. 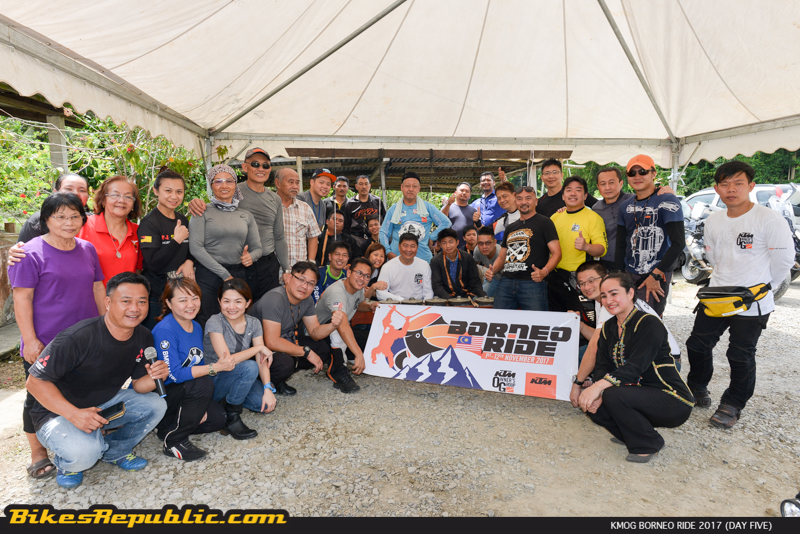 There to welcome us was a gamelan band and members of Jonathan’s family and friends, who had prepared a special lunch, which Bear Grylls would’ve been elated. 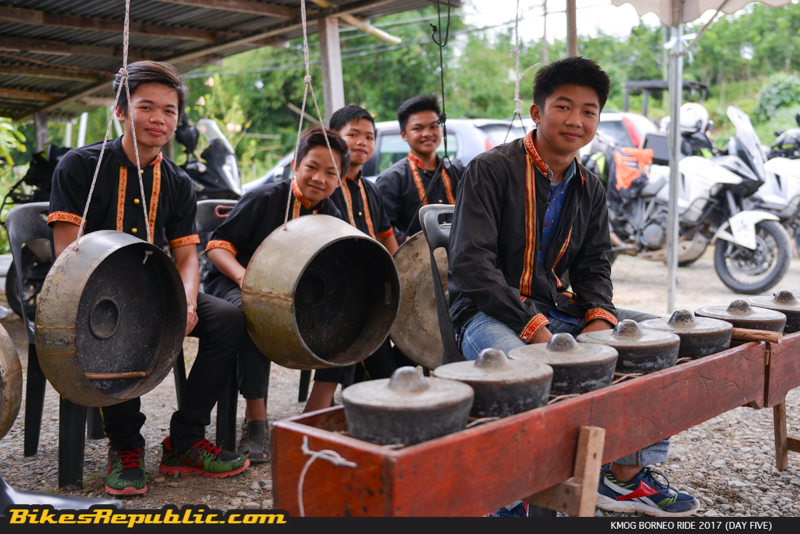 The lunch was special alright, which included what the locals called butod, the larvae of the sago tree weevil (beetles). These giant larvae were white in colour giving the appearance of monster maggots. They were alive and wriggling in a dish. There was another dish beside that had them fried in soy sauce. It’s a delicacy around here and a 100% source of protein. 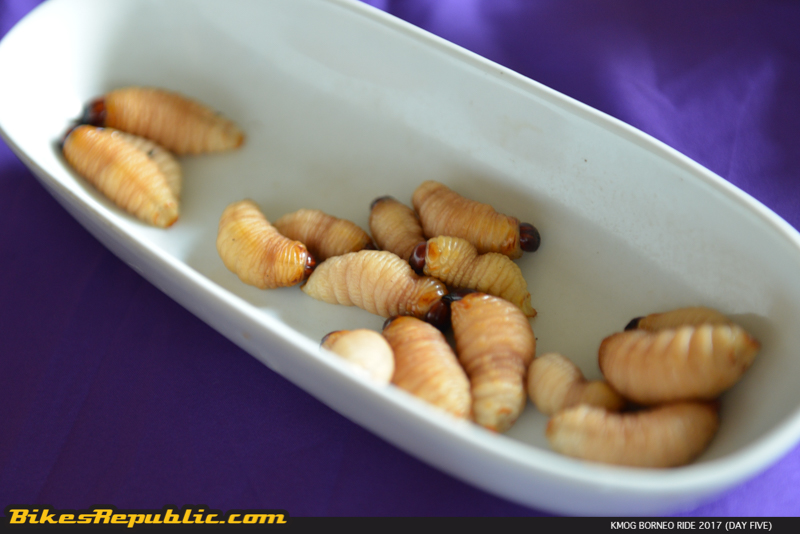 Also shown to us was a large Horlicks jar containing a cow’s stomach, mouse deer embryo, pangolin embryos and other “stuff” soaked in a colourless liquid. That liquid turned out to be rice wine. The family had kept that recipe for 50 years, topping up the wine when it ran low. 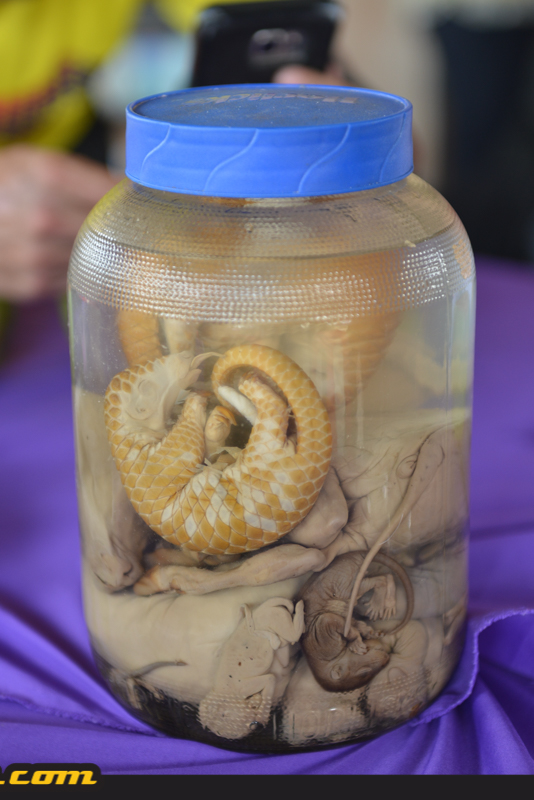 Of course, there were other dishes too, including vegetables, fowl and fish. Fresh fruits were especially tasty, no doubt due to being grown in places of low pollution. I downed cup after cup of Sabah tea and Tenom coffee. 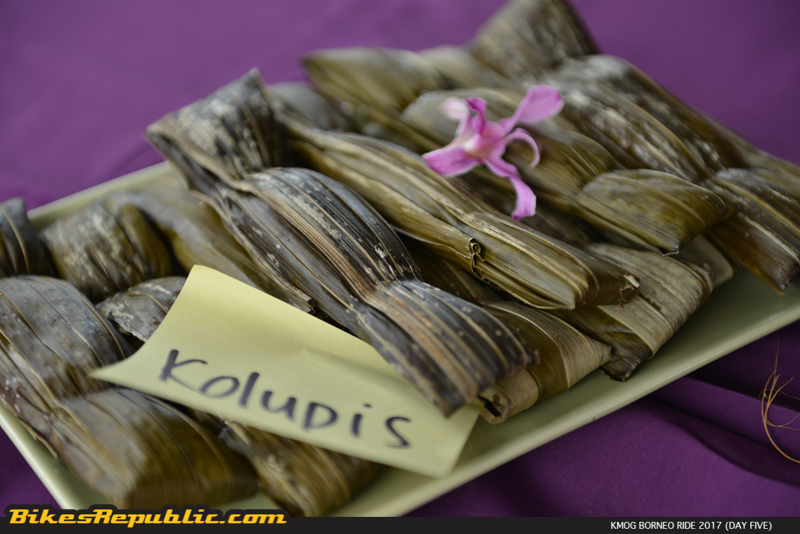 Jonathan’s neighbours Raineh and her husband also came by to assist and they invited the participants to take part in their traditional Sumazau dance performance. 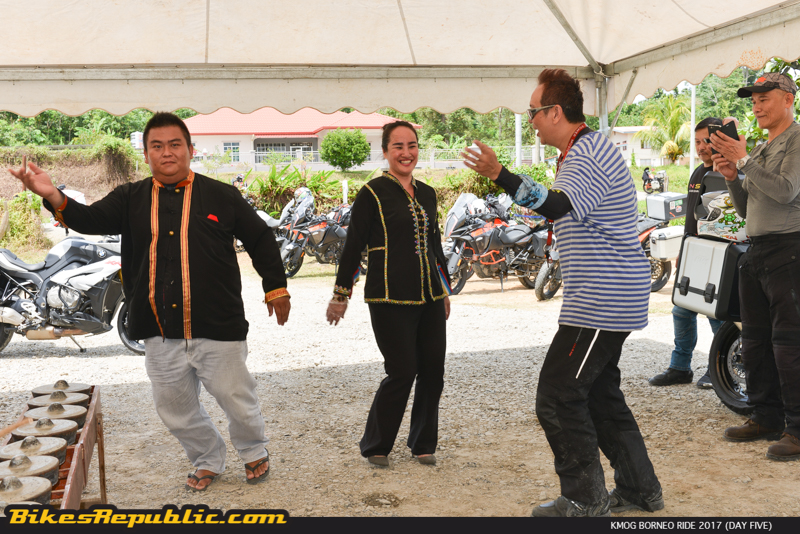 We rode on to the Menumbok Ferry Terminal and spent some time awaiting our turn to board the ferry to Labuan. It was quite a wait as the ferry operates on fixed intervals. 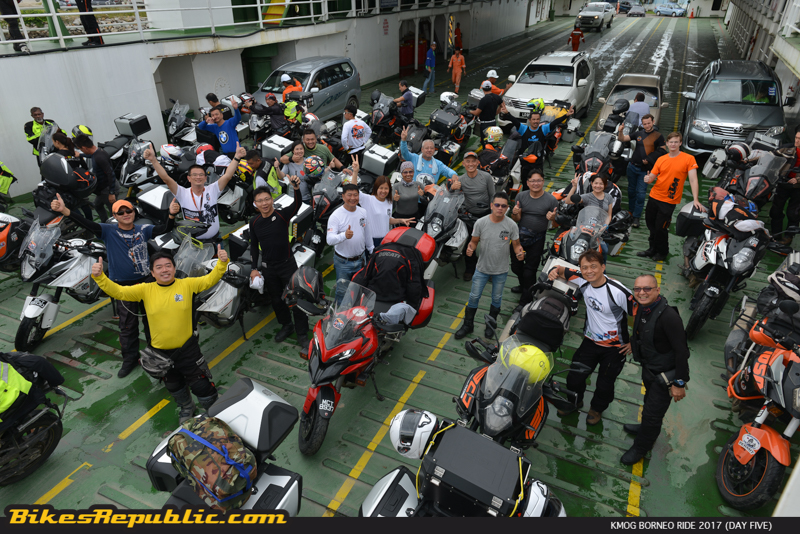 The ferry was large and could fit all 38 bikes at one go, and still had room for other large vehicles. There was an air-conditioned deck for passengers above the vehicle deck, where most of the participants retreated to. 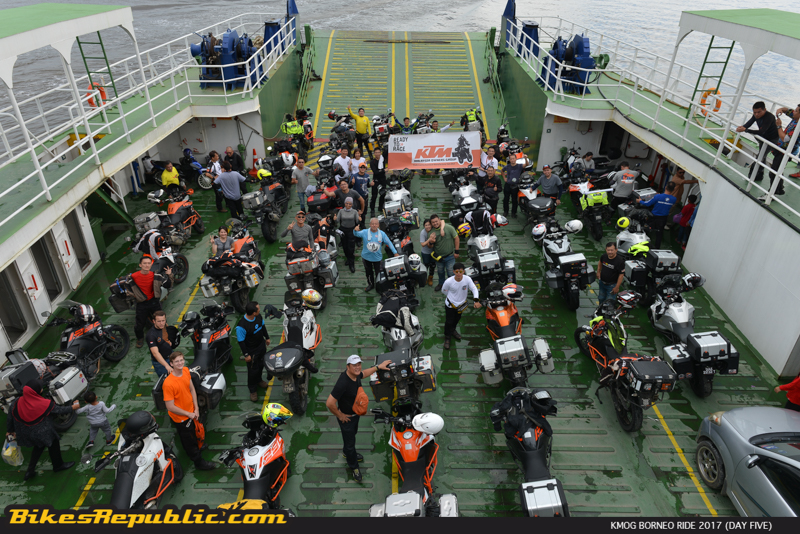 The ferry ride took one-and-half hours. As we got closer to Labuan, we could see many ships of different fit outs, but the majority serving the oil and gas industry at Miri. Our hotel, Billion Waterfront, was situated right next to the sea. 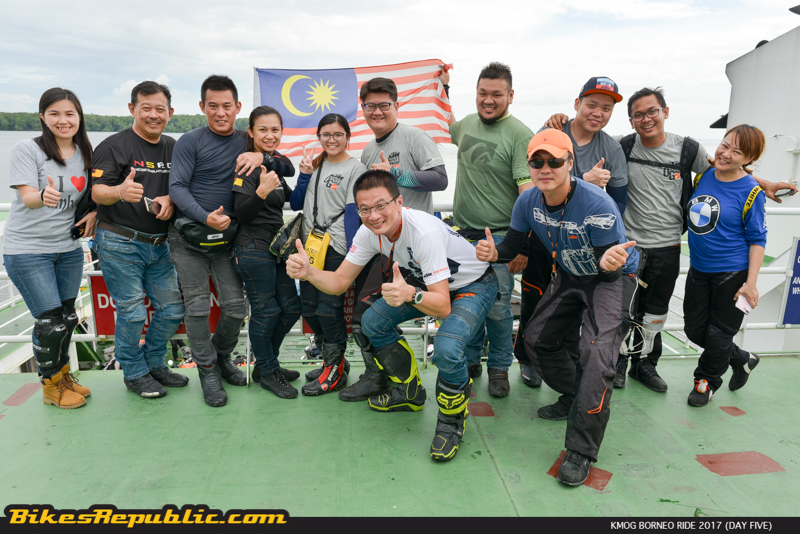 Dato’ Chia Beng Tat, Chief Executive of KTM Malaysia had joined us for dinner that night. We sat at the table with Captain Ganesan, the tough pilot set a Guiness World Record by riding his motorcycle continuously for 5600 kilometres over four-and-half days straight! He had also ridden 1,500km from Kuching to Kota Kinabalu for the KMOG Borneo Ride 2017 briefing on 1st November! We are not worthy! 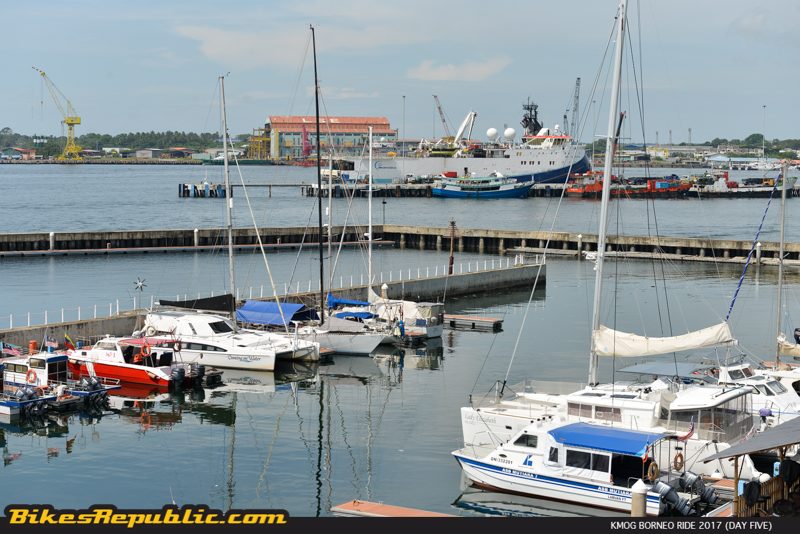 Labuan signaled the first leg of this epic journey, and it was also the location where a few of us had to say goodbye to the rest of the participants. I had to fly home on the 6th to prepare for another engagement on the 9th. The group stayed over for another night before departing to Miri through Brunei.

At the time this article went “live,” they had arrived safely in Miri.

The KMOG Borneo Ride 2017 had been an astounding success on many fronts.

Firstly, it provided an important activity for KTM motorcycle owners to experience the KTM lifestyle firsthand. Secondly, it would’ve extinguished any doubt about the reliability and capabilities of KTM’s motorcycles to not only the owners themselves but also to the world at large, since not a single bike broke down. Thirdly, it provided an enjoyment unlike any other, as participants experienced every aspect of riding and the environment in which they rode through. Fourthly, participants experienced the many wonders of Borneo, in terms of the roads, weather, environment, sights, culture, people, food.

But most of all, the KMOG Borneo Ride 2017 participants experienced the freedom of being on the road (and also off) on the orange-coloured machines from Austria. 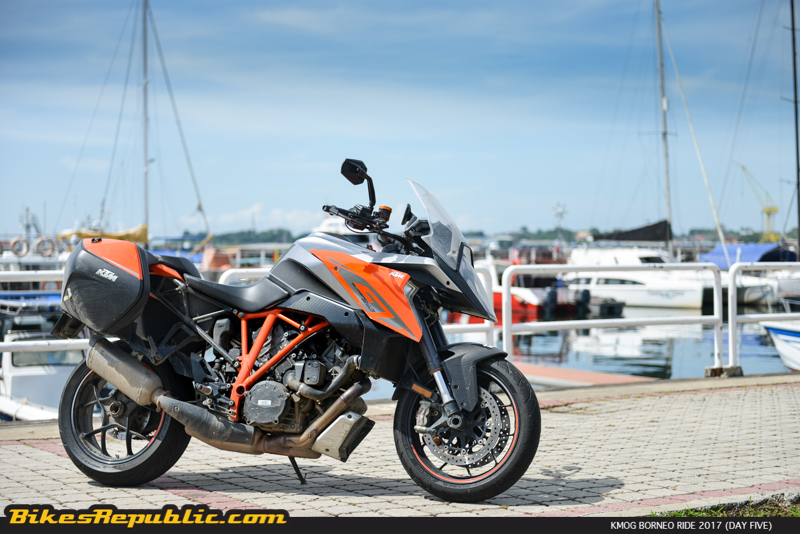 Please click here for Day One of the KMOG Borneo Ride 2017.