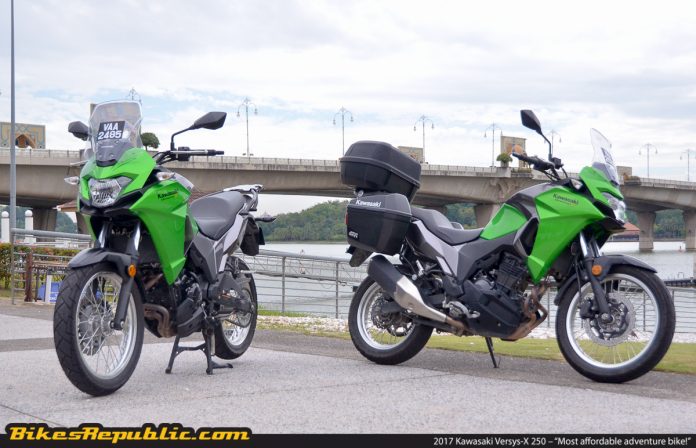 The Kawasaki Versys-X 250 has come a long way from when adventure, adventure-touring, dual-purpose bikes that were big, tall, powerful beasts; runaways from the dunes of the Paris-Dakar Rally. Anyone remember those mighty 750cc and 900cc V-Twin DP (dual-purpose) bikes in the 90’s? Well, those were the granddaddies of adventure motorcycles.

The motorcycle class in the Paris-Dakar Rally (now Dakar Rally) had started out with competitors on smaller, single-cylinder bikes but as an arms war pushed the factories and riders to gain the upper hand against each other, the bikes became bigger and heavier, and of course more powerful. The single-cylinder, enduro-based bikes that were sold to the public and modified to race, gave way to purpose-built machines that were then sold afterwards as replicas.

However, with the increase in speed came increased number crashes and fatalities in the world’s toughest rally. That had the organisers knocking back the multi-cylinder format to single-cylinder bikes to cap the speeds, first from 690cc and to 450cc since 2011.

On the road, ironicaly, it went the other way in terms of engine capacities. Most true adventure and adventure-touring motorcycles in the market are being dominated by middleweight (750cc to 80cc) to open-class (1000cc and above) models.

The open-classers are not cheap for most motorcycle enthusiasts, unfortunately, ranging from around RM80,000. The middleweights on the other hand, are usually priced from RM50,000. Engine power range between 70bhp to 160bhp. 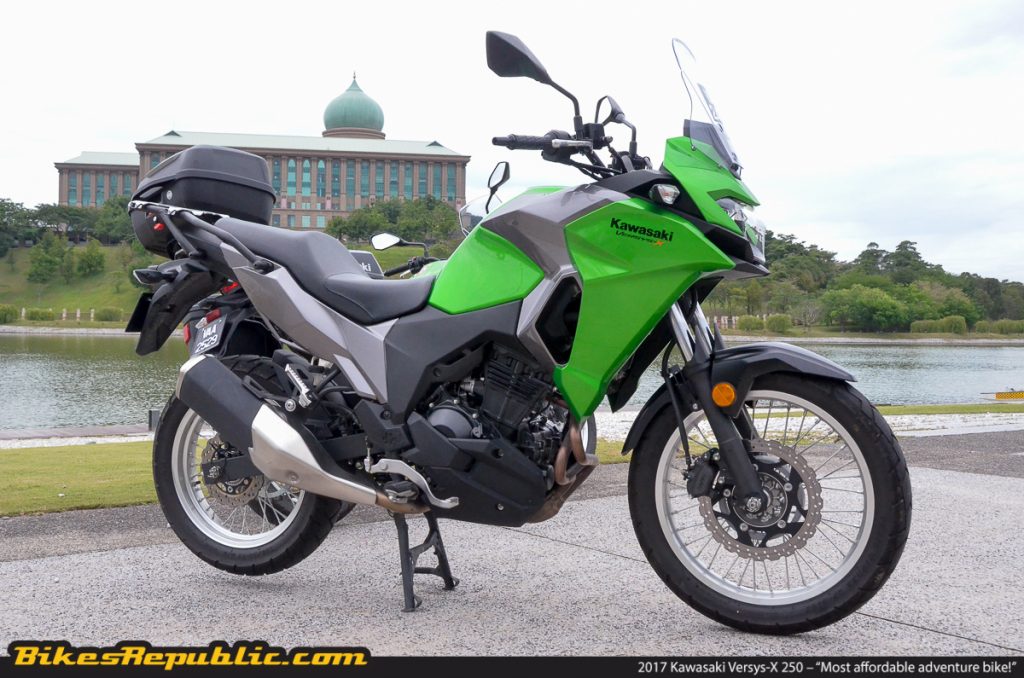 1. Smooth Power
Riding in the rough is not all about outright speed. Average offroad speeds are typically 30km/h, the fastest top speed being approximately 60km/h. Anything above that is for the pros, or if you’ve signed your last will and testament. 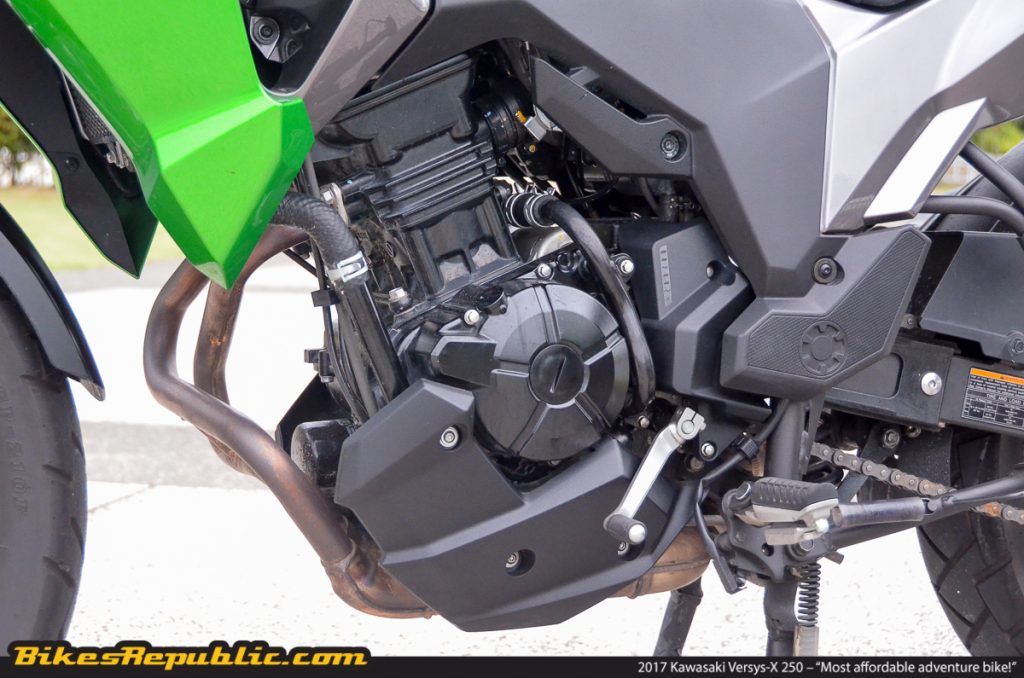 Let’s face it, most of us aren’t full-time or even part-time motocross or enduro riders.

Why the lower horsepower on the KLX? Because too much speed in the rough isn’t necessarily a means to an end. Just like the big Dakar bikes of yesteryears.

For the Kawasaki Versys-X 250, beginners would appreciate it, pros would find it interesting.

Not only that, the throttle response is smooth and benign at the initial opening.

Riding offroad is all about the ability to handle a bike that’s on the edge of tyre adhesion, besides being able to point it where you want it to go.

Sure, the bigger bikes have more electronics but they are still heavier, taller and may have too much power for the rough for most riders to handle.

The motorcycle will jump, drop, slide, squirm under you as your ride offroad. Soon, your arms, leg, back, and core muscles will start to feel “The Burn.”

Now imagine if you’re riding a 200+kg bike while all that’s happening.

Your body and mind might give up soon enough, followed by a spill. Talk about putting a damper in your enthusiasm for the ride.

Let’s cite an example: This writer has ridden in ankle-deep sands in South Africa. While most participants chose the 1200cc adventure-tourers, this writer opted for a much smaller and lighter 660cc enduro. Soon, every single 1200cc rider crashed in that section except for one, but this writer got through without a single scratch. And that sand was nothing compared to the sand dunes of the Tenerife desert!

Having ridden the Versys-X 250 offroad afterwards, it’s the perfect bike for the job.

Having a narrow midsection where the seat joins the tank is an important design factor. As covered in our offroading tips article last week (click here to read), you need to stand up. 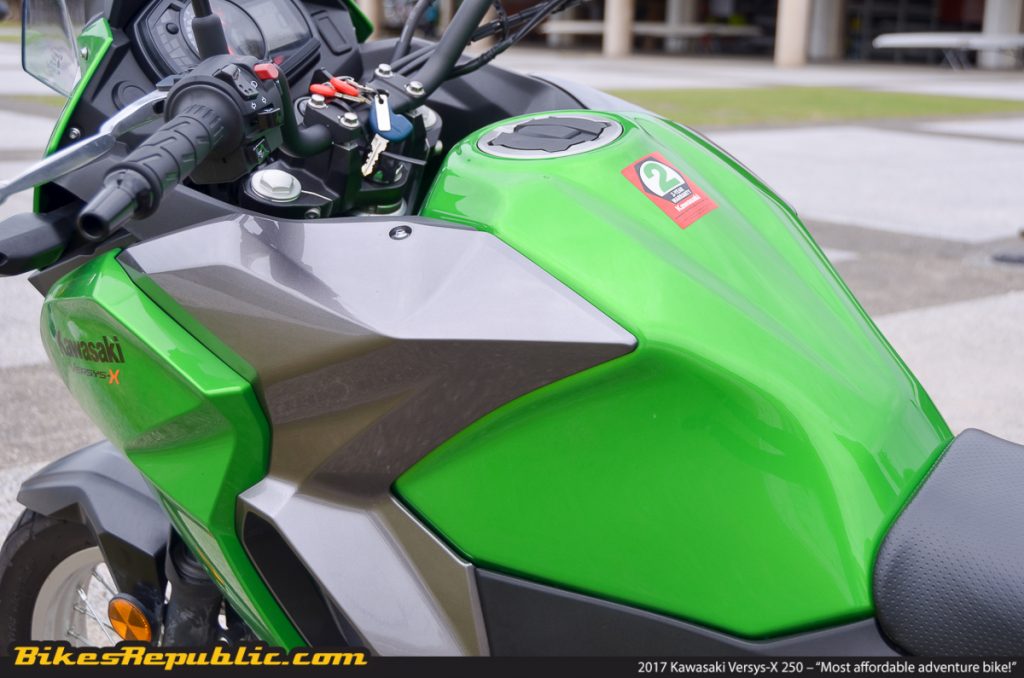 As you stand, your legs ought to be parallel to the bike’s vertical profile, instead of being splayed outwards like on a cruiser. That way, you could help to steer the bike by pushing down with your legs, or clamping onto the midsection to stabilize the bike on the faster straight sections.

The Versys-X 250 does have a narrow midsection, but there’s also a bonus.

Notice how the fuel tank slopes precipitously downwards toward to seat? That’s for the rider, especially us of Asian heights, to push our upper weight forward onto the front wheel. The sloping tank means there’s much less likelihood of it upper cutting the rider in the groin, should the bike hit a bump. 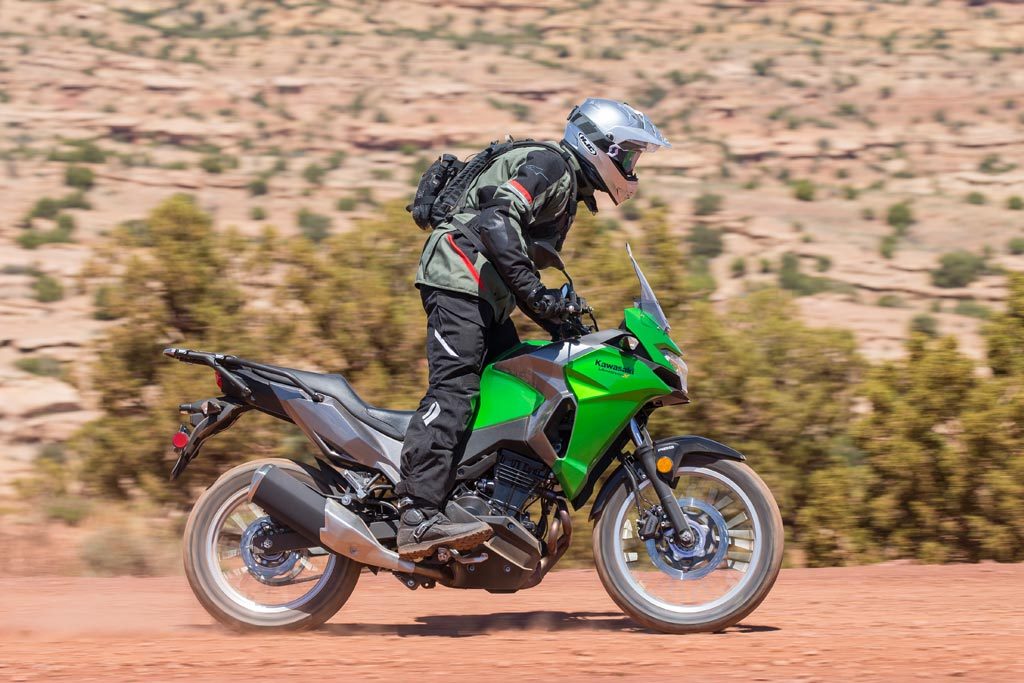 As with adventure motorcycle convention, the Versys-X 250 has 130mm front and 150mm rear suspension travel. The front wheel is 19-inches in diameter. That combination equals a relatively spacious ground clearance of 180mm. 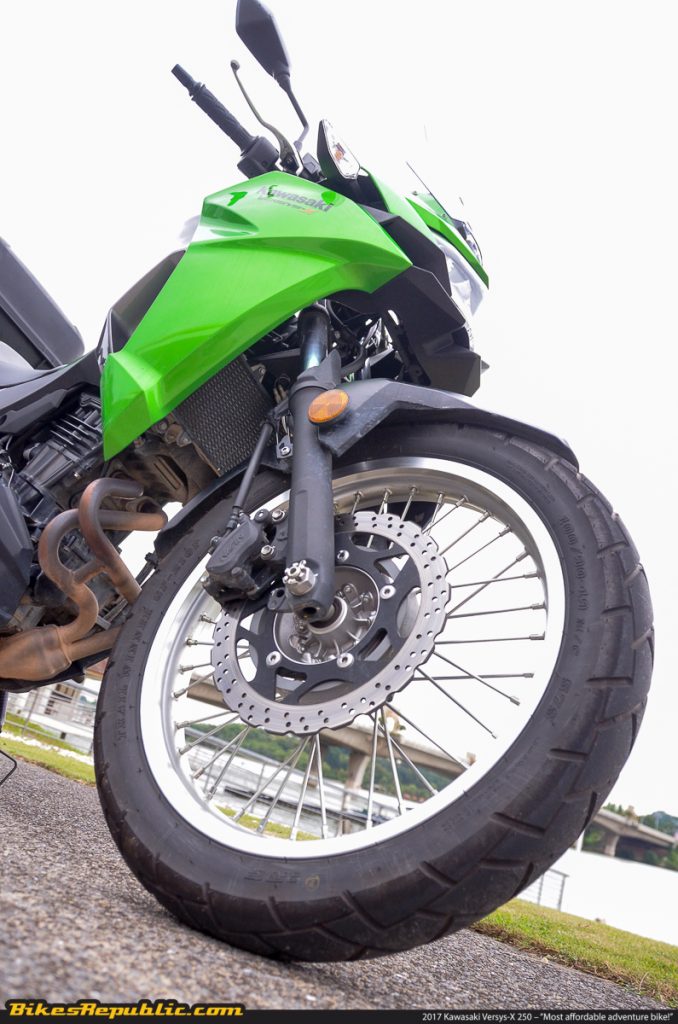 A long-travel suspension means there’s more “space” for the suspension to absorb hits from the ground, especially on rough “no roads” to deliver a smoother, less jarring ride for the rider.

Although adventure bikes are generally tall, the Versys-X 250 features a low-seat height of only 815mm to accommodate beginners and us of shorter stature. 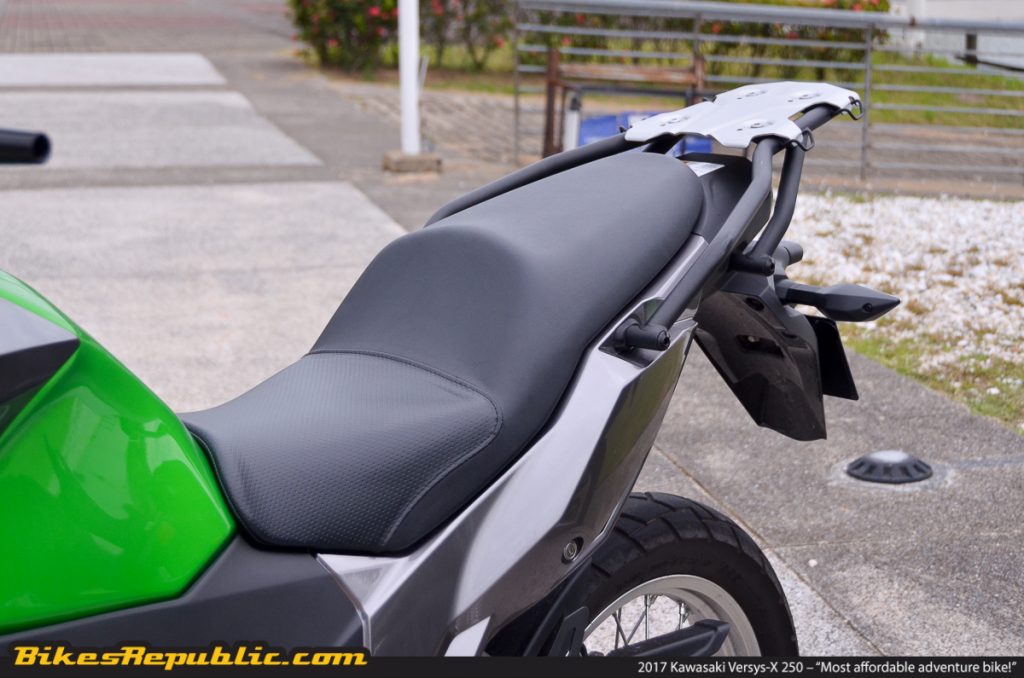 Being able to touch a foot down in while riding offroad is reassuring especially for beginners, but it’s also something which has to be done while cornering. The quicker the foot touches down means the less the bike has to lean into a corner, consequently the less chance of the tyres sliding out from underneath.

Back on the road, the lower seat height also contributes to security when the bike is at standstill or crawling through traffic.

Bikes of this nature are practical and the Kawasaki Versys-X 250 is no different. But since it’s a smaller capacity bike, it has a slender profile with tall a handlebar. Coupled to its lack of weight and you have a great urban bike. Being slim with the tall handlebar means you could filter through traffic without much worry, while being lightweight means its agile. 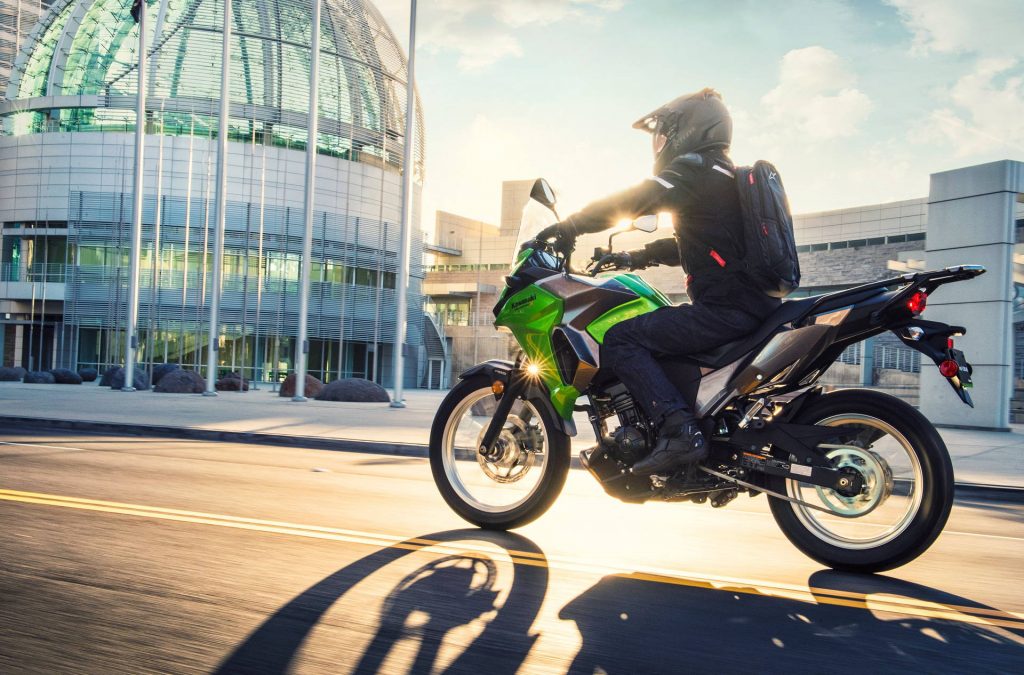 Plus, since the bike is comparatively tall, it gives you a better field of vision ahead of the traffic all around you.

Because the Kawasaki Versys-X 250 is an adventure bike, it has much room for luggage. Throw on a pair of GIVI panniers and a top case and voila! You’ve got yourself an adventure-tourer (just like the Versys-X 250 we reviewed here). 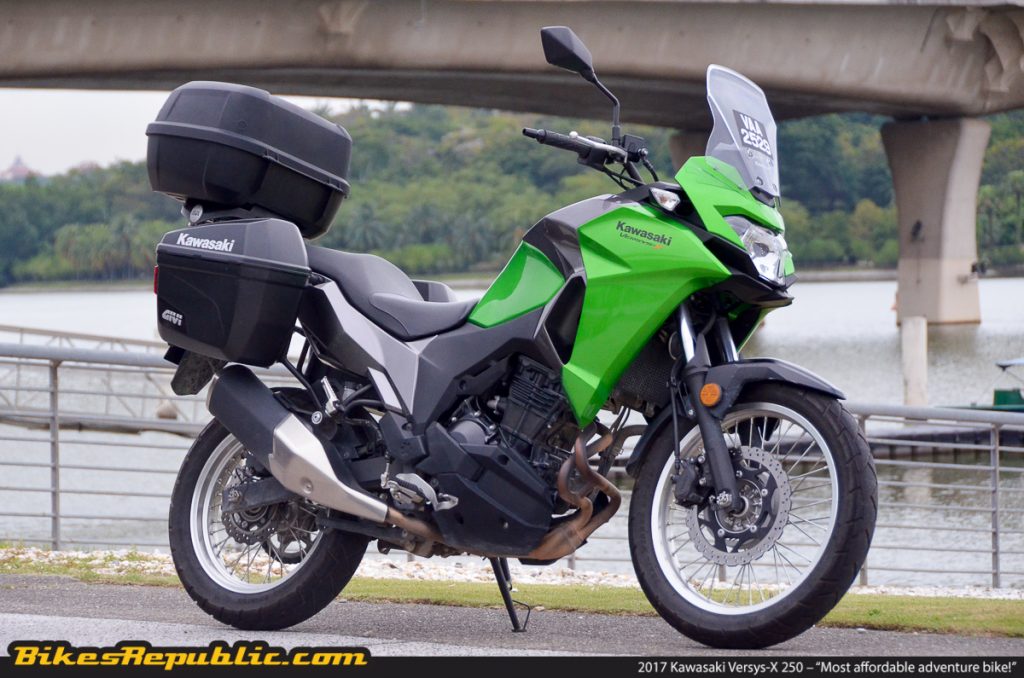 The liquid-cooled, four-valve per cylinder, DOHC, 249cc, parallel-Twin engine is also fuel efficient. Throughout our testing, we’ve extracted between 260 to 300km from the 17-liter fuel tank.

Top speed is a little above 150km/h and that’s fast enough for most applications.

In closing, the Kawasaki Versys-X 250 is the recommended for those who want to embark on the wonderful journey into adventure-riding. However, because it is practical, lightweight and agile, it should also appeal to seasoned road riders who want to try out the rough stuff. But remember that it’s also a very capable roadbike.

The enjoyment of adventure-riding shouldn’t need to be done on expensive machinery only, evidenced by the Versys-X’s wallet-friendly price tag of only RM23,789 (with GST). Truly the only kind in the Malaysian market.