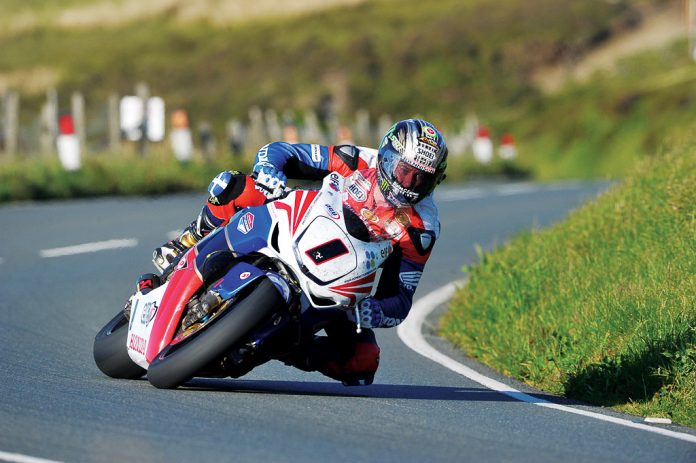 John McGuinness was diagnosed with a compound fracture to his right leg, four broken vertebrae and three broken back ribs during the North West 200 Superbike Practice Session on 11 May 2017.

McGuinness is required to wear a cast up to six weeks as treatment for the extensive injury on his vertebrae and will remain at the Royal Victoria Hospital for the upcoming week.

The “King of the Mountain” will most probably unable to participate at this year’s Isle of Man TT race on 27 May 2017 with his new team mate, Guy Martin.

Following John McGuinness and his crash during the practice session, Honda Racing has released an official statement regarding what happened during the 2017 North West 200 Superbike road race which was held Northern Ireland. John McGuinness went through a horrendous crash at the Primrose Section on 11 May 2017 at the final minutes of the practice session before the evening race.

CLICK HERE to know more about the incident in our previous article.

“John has been diagnosed with a compound fracture to his right lower leg, while in theatre on Thursday night it was not possible to plate the leg as initially thought due to the extent of the injury, and tomorrow an external fixator will be fitted,”

“In addition, John has also suffered four broken vertebrae and has three broken back ribs and he will wear a cast for up to six weeks in treatment for the vertebrae. John will remain at Royal Victoria Hospital for around one week as part of the recuperation process.”

According to John’s team manager, Jonny Twelvetrees, he stated that ““Unfortunately John’s incident at Primrose Hill during qualifying has resulted in quite a substantial injury to his right Tibia and Fibula. It is a real blow to John and the team, but he’s got an incredible amount of spirit and is in very good hands with the medical staff at the Royal Victoria Hospital,”

Twelvetrees also added “We now need to determine what happened and will sit out the Superstock and Superbike races, get back to Louth to analyse John’s bike and re-group ahead of our next test at Castle Combe in a couple of weeks before we head to the Isle of Man.”

The team will continue their efforts over at Castle Combe in a couple of weeks’ time as part of its preparation for the Isle of Man TT event at the end of May 2017.