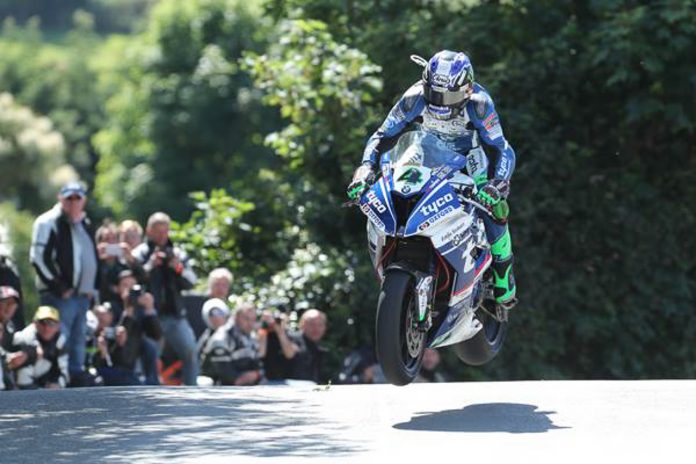 The win marks Hutchinson’s 15th TT win which makes him the third most successful rider of the island circuit.

The great Ian Hutchinson from the Tyco BMW squad took the first Isle of Man TT of 2017 with a stunning victory in the RST Superbike race yesterday. Yesterday’s victory marks Hutchinson’s 15th TT win in his racing career.

The 35 year old from Yorkshire also became the third most successful solo rider in the Isle of Man TT race ahead of the late great Mike Hailwood. The current record so far is still being held by the late Joey Dunlop with a record of 26 wins and John McGuinness with 23. McGuinness was forced to sit out of this year’s TT race due to injuries sustained during a crash in the recent North West 200 road race.

Five seconds behind Hutchinson’s BMW S1000RR was Peter Hickman who picked up his first ever TT podium finish. The Hickman’s Smiths Racing rider qualified at a low 10th position but quickly clocked in incredible times to finish ahead of early race leader, Dean Harrison.

Early race leader Dean Harrison managed to salvage the final podium spot in third position on board his Kawasaki ZX-10R. The Silicone Racing rider had quite a consistent session throughout the practice and qualifying sessions but crossed yesterday’s finish line with a gap of eight seconds behind Peter Hickman. Check out this on-board video of Harrison chasing James Hillier in of the practice sessions.

The action of the world’s most intense road race continues today with the Supersport race and also the Sidecar race. Stay tuned to Bikes Republic for more TT updates.