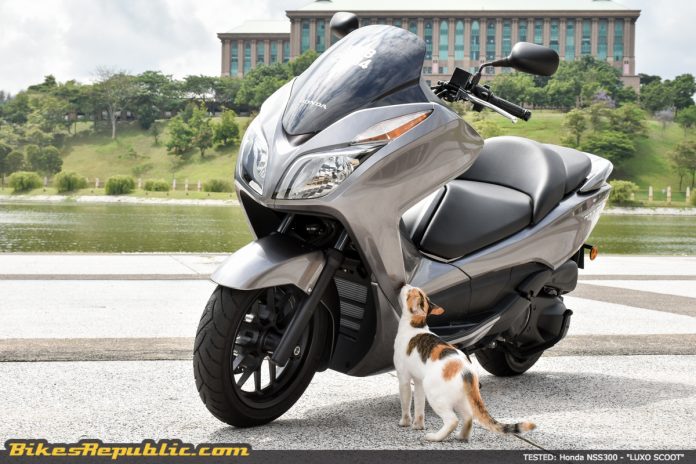 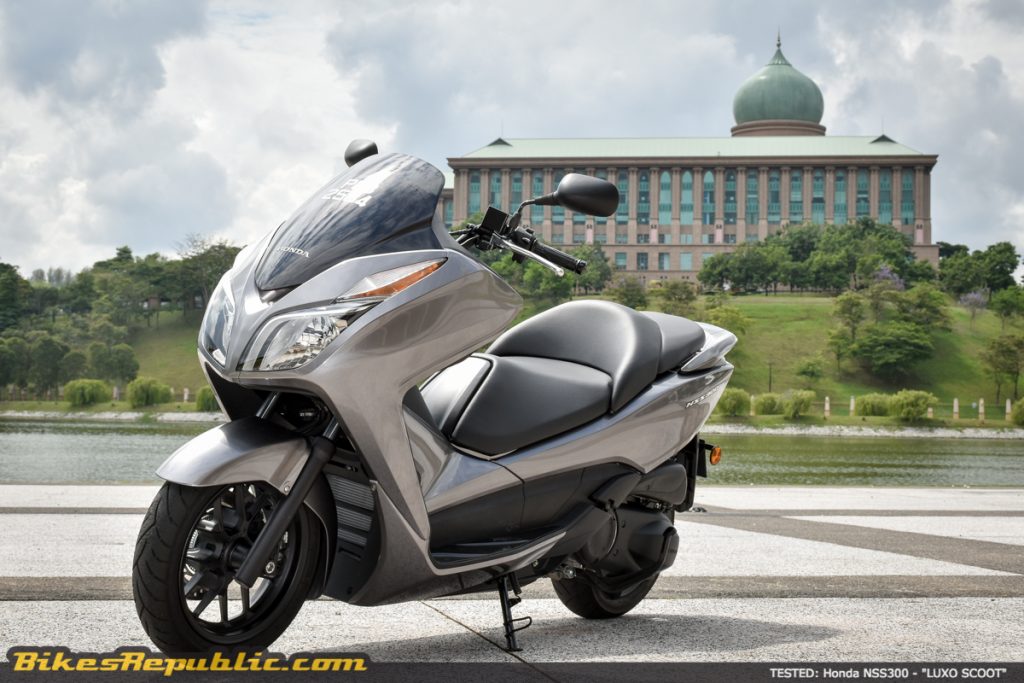 The program sheet stated, “Test ride of BSH’s latest big bikes on track.” Whoa! Who could ever resist such an invite, regardless of the fasting month. 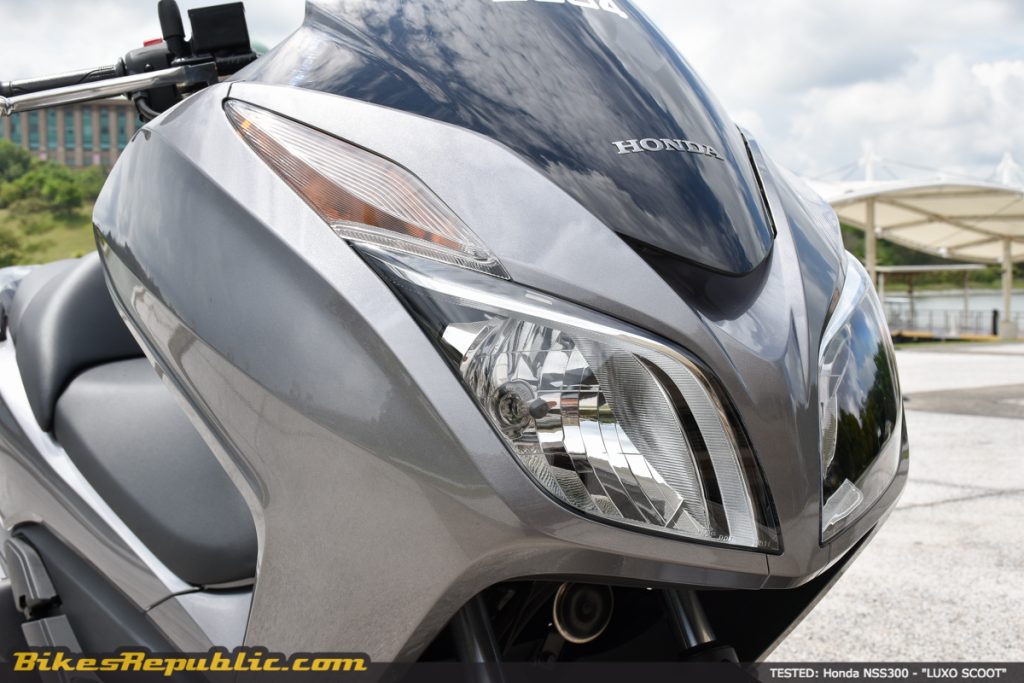 Err… wait a minute. Scooters on the fabled SIC track? Here where GP greats race on? Surely there’s a mix up. 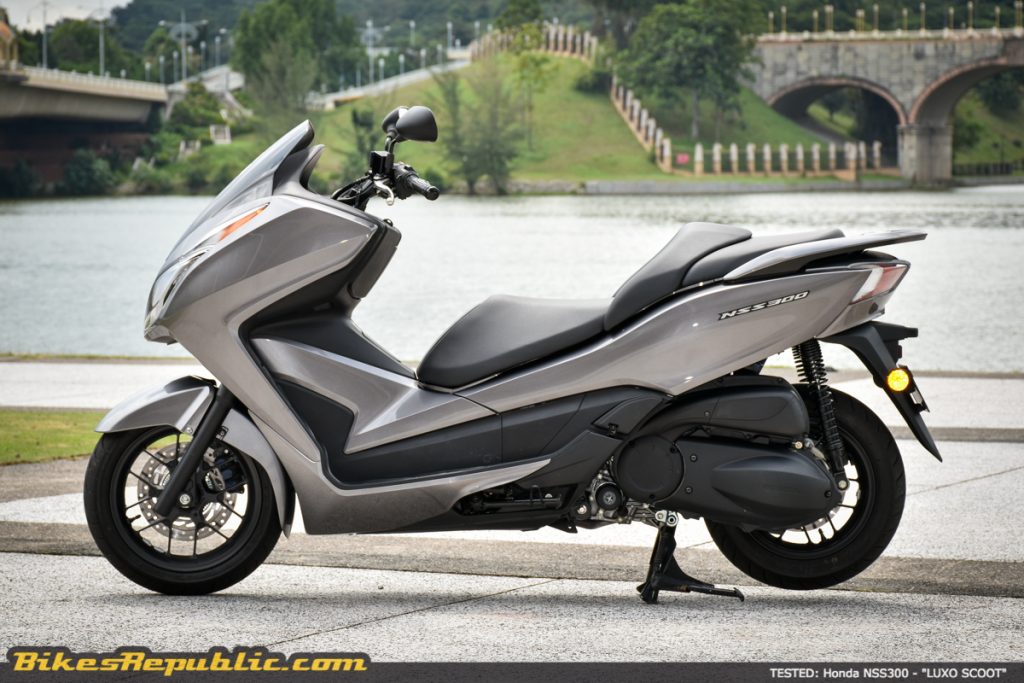 Anyway, I kept my mouth shut and we switched bikes at every session of 3 laps. And I was finally on the white coloured scooter. It said “NSS300” on the flanks. I climbed on, in complete RS Taichi leather racesuit and stared at the car-like instrument cluster.

BSH’s personnel signaled us to go and out I went of the pit lane and onto the circuit. 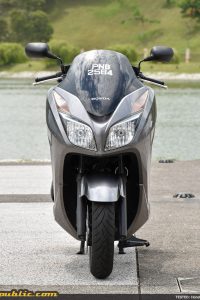 Down into Turn One and Two, it dawned on me of how agile the NSS300 was, despite its long, long wheelbase and wide body. But it was when I flew threw Turn Three, then swept down the hill from Turn Four to Five and through Six, which curved all the way to the front straight that I realized that this was a scooter unlike any other.

Small-wheeled scooters have a tendency wobble in long sweeping corners, but the NSS300 was stable on its sides, so much so there were journos who were throwing off sparks from the centrestand and grounding the fairing. 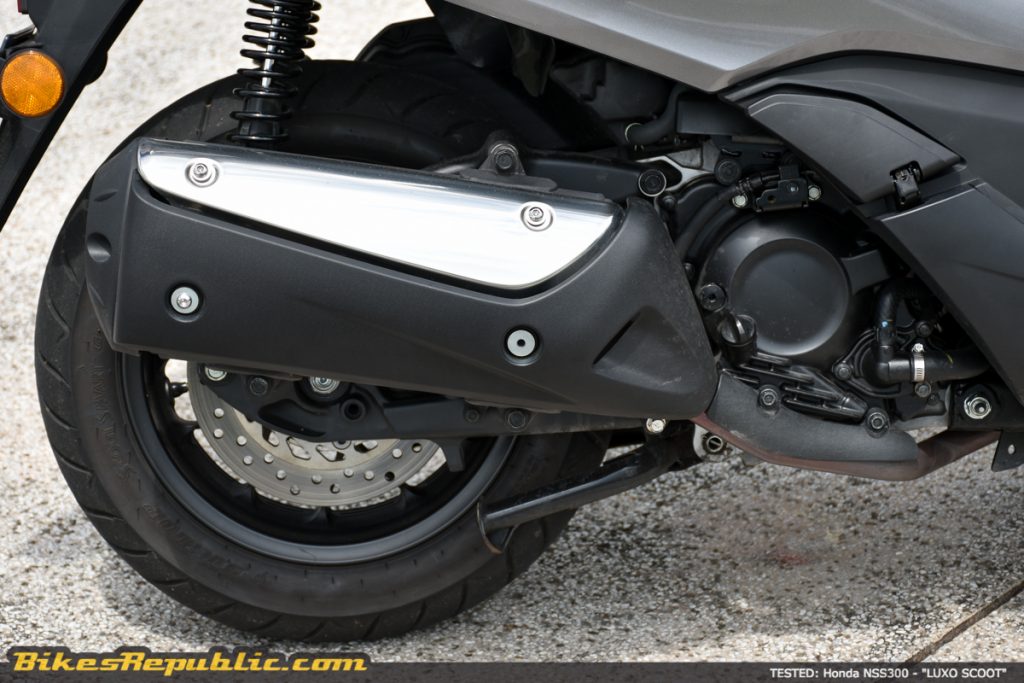 The engine responded immediately to the throttle and was so smooth that it was almost electric-like, belying the fact that it has one-cylinder. Speed climbed effortlessly as we blasted, er… swooshed down the front straight.

Everyone regrouped at the paddock afterwards for breaking fast. We compared notes and while all bikes were good, it was the NSS300 that had surprised everyone. 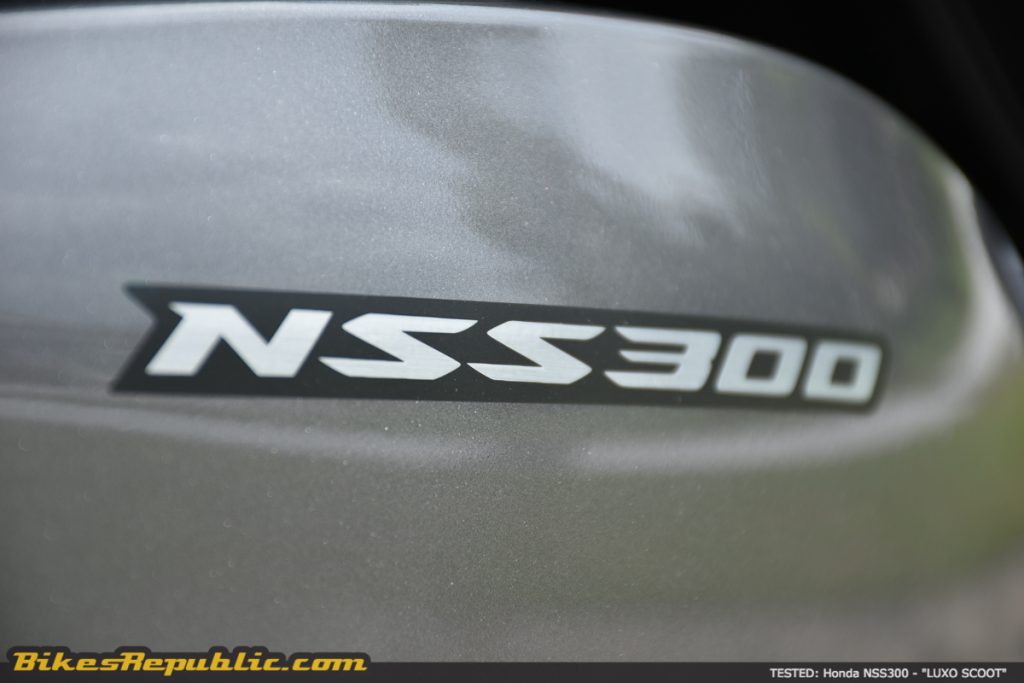 I made a mental note that we needed to test this bike on the road someday. Will it do well on out in the real world too?

Well, who says prayers are never granted? BSH had arranged an NSS300 for us and I jumped on the opportunity like an unconditional donation. 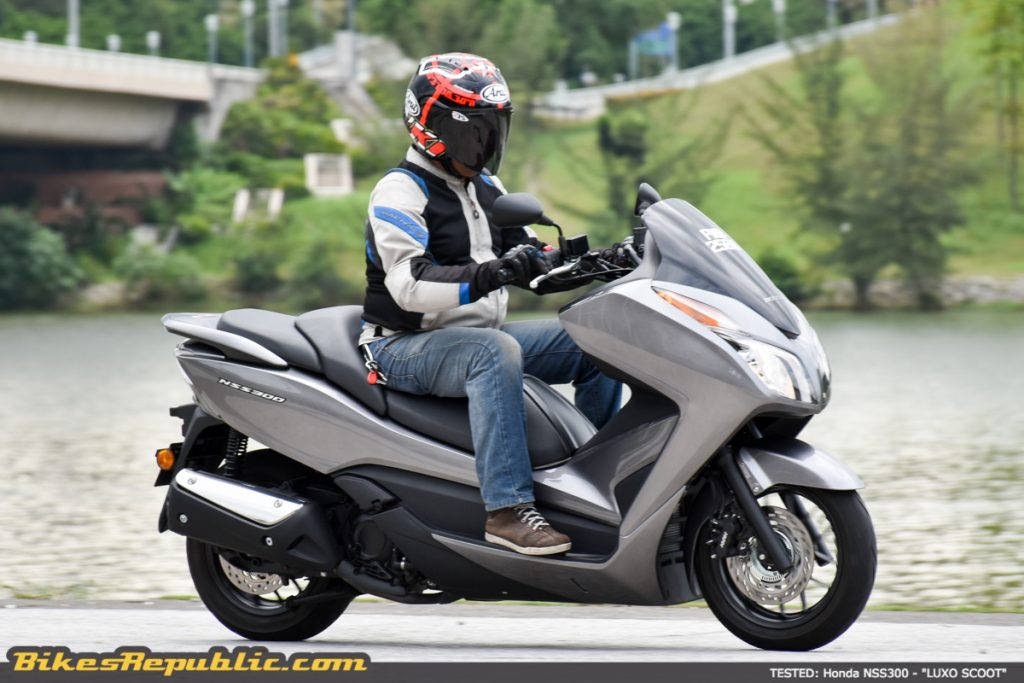 Known as the Forza in certain countries, the Honda NSS300 is offered as a luxury scooter. On first viewing, it looks like a PCX150, but make that a supersized PCX.

While the PCX is a compact runabout, the NSS fills the roles from being an everyday commuter to a long-distance automatic tourer. As such, the bigger NSS offers plenty – make that a lot – of storage space. There’s a cavernous 62-liters of space under the seat alone. 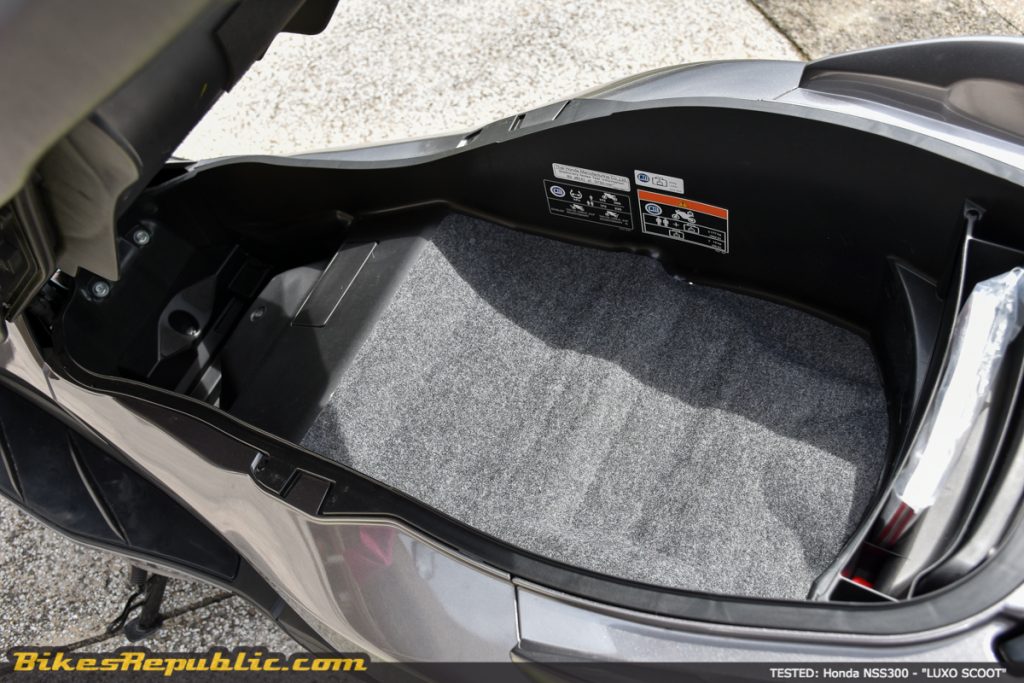 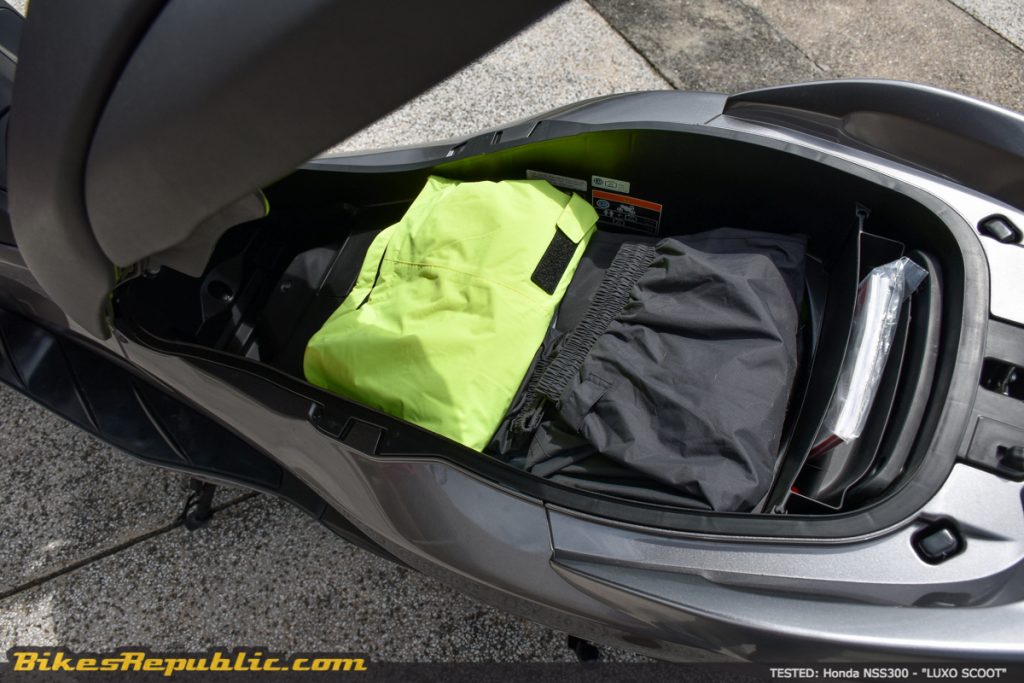 There are two more “glove boxes” embedded in the large fairing up front. The right compartment is not lockable and smaller, enough for a wallet or pack of ciggies. The left compartment, on the other hand, has to be released via a button. It’s so deep I could reach in all the way with my forearm right up to the elbow! A scary movie might have that arm pulled by a monster inside… Anyhow, I stored a bottle of 100 Plus, plus my phone and a pair of gloves in there. There’s also a cigarette lighter-type 12V socket in there for you to charge your phone or other devices. 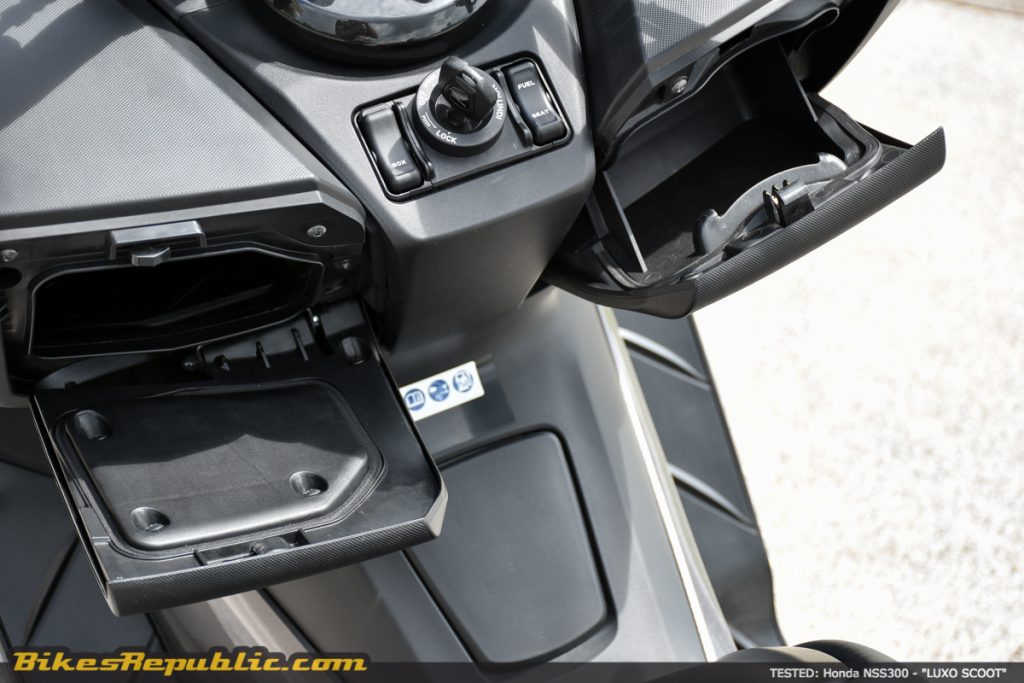 The large instrument cluster looks familiar… like it belonged in a Honda car or Gold Wing, perhaps? The view is dominated by the large analog speedo and rev counter, flanked by the fuel and coolant temperature gauges. There’s a smaller round LCD on the top which displayed the average litre/100 km fuel consumption. 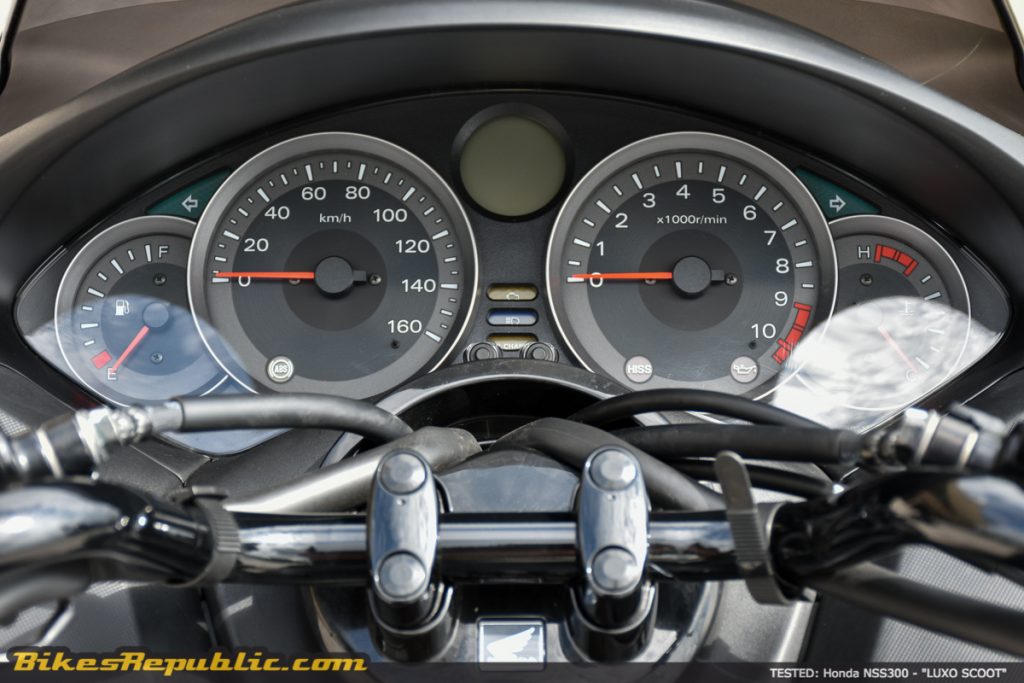 As large as the NSS300 looks, its seat is actually quite low. The sides are tapered off so even a short rider like me had no problems setting both feet down at stoplights. The seat widens to the rear up to the backstop. A nice touch. The rear portion is wide and deeply cushioned.

Insert the chip embedded HISS (Honda Ignition Security System) key and start the engine. It fires up with a small thump from the large piston then settles down into a zen-like idle. Twist the throttle and off you go. 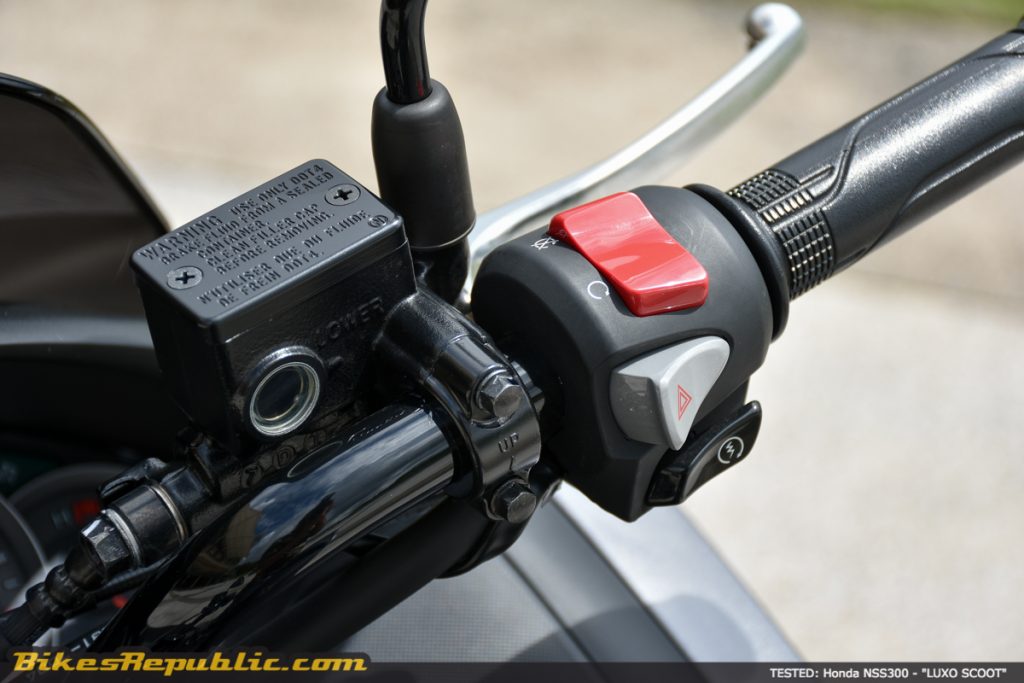 The liquid-cooled, SOHC, single-cylinder, 279cc engine is governed by Honda’s proprietary PGM-FI electronic fuel injection system and coupled to a seamless CVT. The combination provided plenty of torque from standstill to almost anywhere in the powerband. 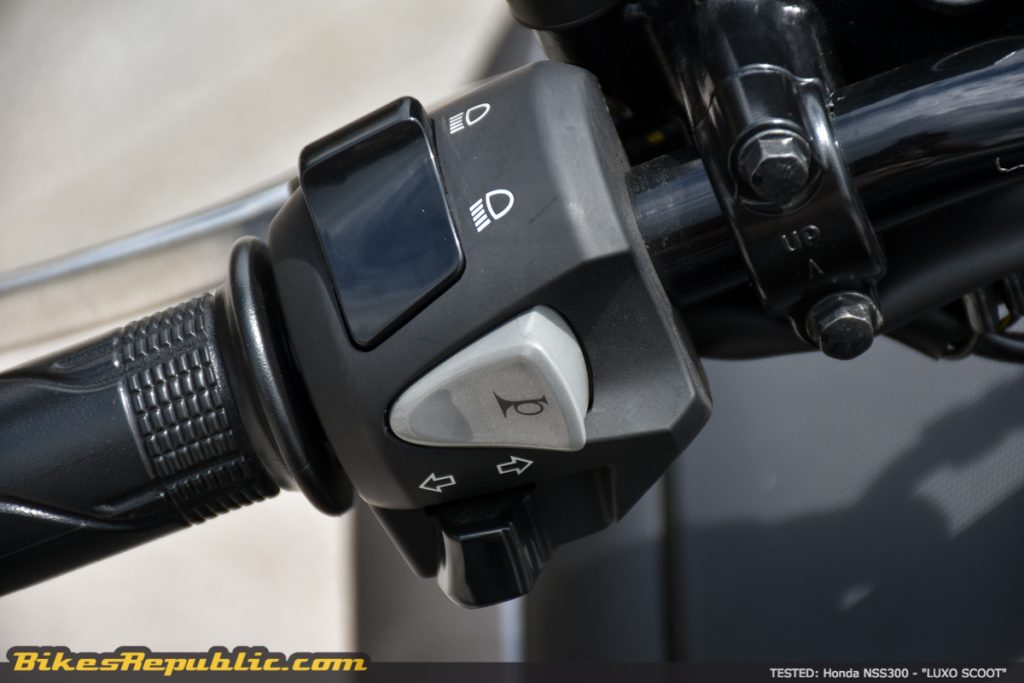 The bike’s size caused some early reservations during our urban test, as I wondered if there’s enough space to filter. Again, these dimensions are misleading – the NSS300 allows you to leave your brain in that left side compartment and go even more bonkers than the already bonkers KL traffic, especially when dispatch riders try to act the foo. Each gap was an invitation to the top step of the podium, each traffic light was a dragstrip’s Christmas lights, each corner was the Rothmans corner. 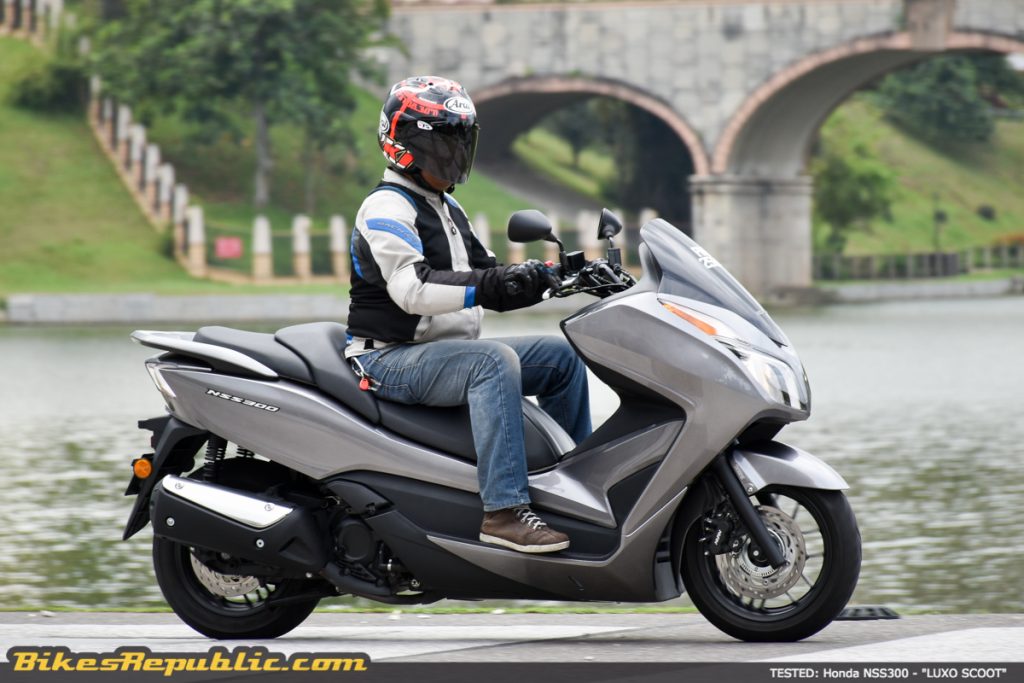 With the super strong Combined Braking System, backed up by Combined ABS, there was no fear of running into the back of another vehicle. The bike just stops almost on a dime. Honda quoted a kerb weight of 194 kg, but the bike certainly felt a lot lighter than that. 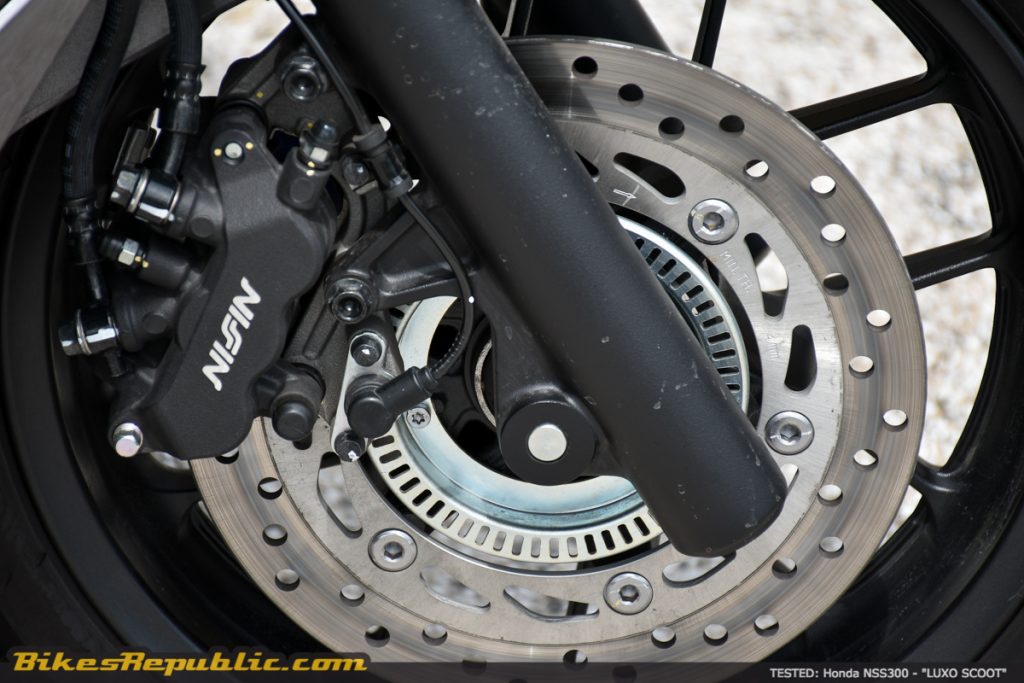 We also had the opportunity to ride the NSS300 on long-ish trips to where we first met, the Sepang International Circuit, to cover an event over the weekend.

Out on the highway, the bike just purred along, never stressed even when ridden at high speeds. It was also apparent that Honda had put in much wind tunnel time as there was very little buffeting, despite the low screen. The deep seat coddled our bums, the long floorboards provided all sorts of feet placement (from the straight up motorcycle posture to being like a garden slug) and the handlebar wa close to the body. Our expectations of touring on the NSS300 was confirmed. 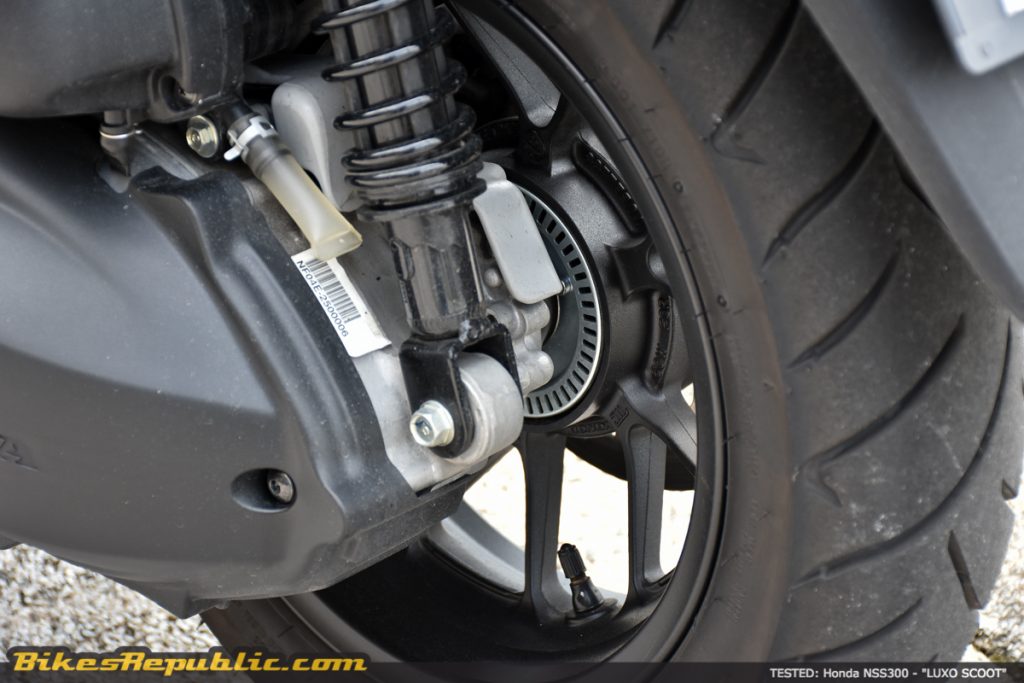 Owning a scooter also meant savings in fuel costs. Honda claimed a frugal 3.24 litre/100 km (30.8 km/litre) consumption. That’s quite close to our best of 3.6 litre/100 km figure, considering the amount of hard charging in the city and high speed riding on the highways. The best range we got from the 11.6-litre fuel tank was 308 km. Not bad at all. 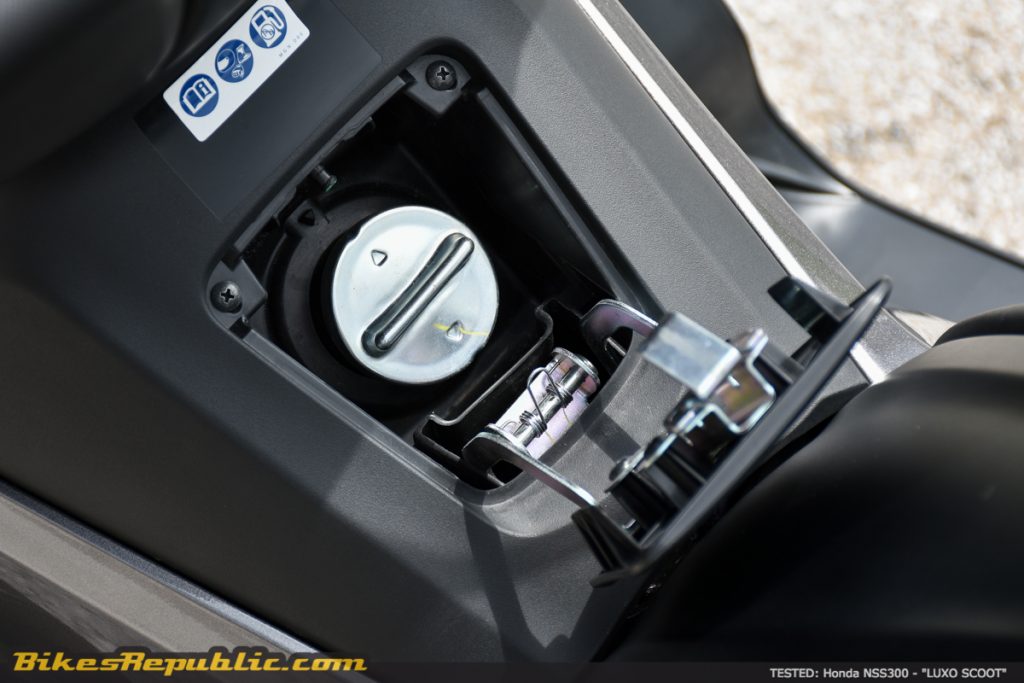 Shortcomings? Again, it’s the condition of our sorry excuse for “roads.” Potholes as deep as fish ponds, patches that seemed like the Titiwangsa range, uneven surfaces like the whoops on a motocross track played havoc with the suspension. However, the NSS300’s suspension coped as well as it could for a scooter, never bottoming out. Uneven long corners also caused the bike to weave slightly, but the bike never threatened to lose its footing and slide out. Honda had also equipped the NSS300 with the excellent Dunlop Scootsmart tyres, which are based on the Sportsmart sport-touring tyres. They gripped well on wet roads too. 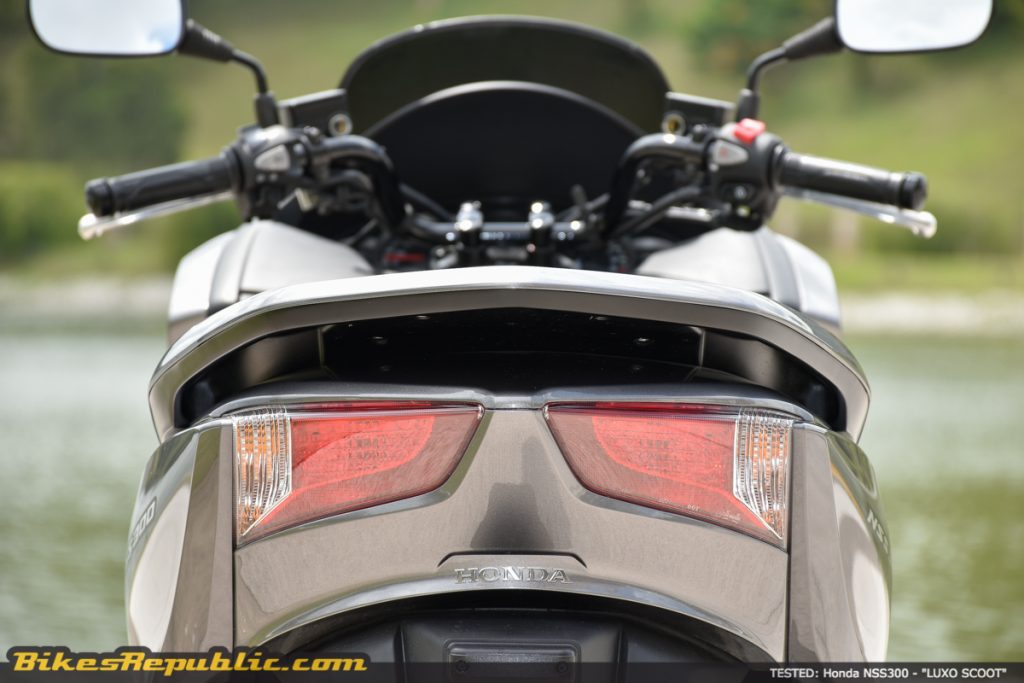 In conclusion, the Honda NSS300 is a refined, practical, rider-friendly, and good-looking motorcycle. You could just jump on and go without having to worry about much of anything else. It may seem pricey, but test ride one and you’ll most probably own it.