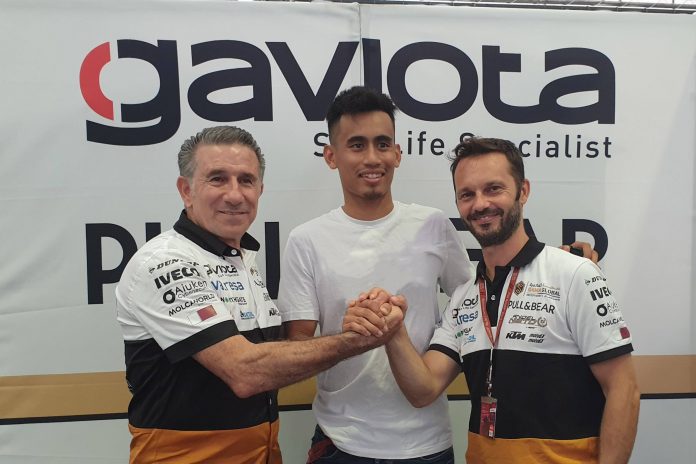 Hafizh Syahrin fans and Malaysians can breathe a sigh of relief as the rider will join the Angel Nieto Team for the Moto2 championship in 2020.

The announcement was made today.

Hafizh will partner Spanish rider and current Moto3 title contender Aron Canet, who will move up to the intermediate class.

The Malaysian began his world championship career in Moto2. He joined as a wildcard in 2011 before progressing to become a full-time rider in 2014. He showed a steady progress from that point, achieving a number of podiums and finished in the Top Ten in 2016 and 2017.

He received the call from Tech 3 Yamaha’s boss Herve Poncharal to join the MotoGP team in 2018, replacing Jonas Folger who was afflicted with an illness. He progressed well and was in contention for the MotoGP Rookie title until a couple of unfortunate crashes saw Franco Morbidelli clinch the title instead.

Hafizh moved together with the Tech 3 team when they migrated to KTM. Unfortunately, he found it difficult to adapt to the KTM RC16 as did his ex-Tech 3 teammate and two-time Moto2 champion Johann Zarco. KTM announced bringing in Brad Binder to replace Hafizh in 2020, midway through the season. Zarco, on the other hand, pleaded for the team to rescind his 2020 contract. He was then removed from the team for the remainder of the 2019 season.

Although Hafizh spent a number of seasons in Moto2, he will find himself returning to bikes with different engine (Triumph) and chassis. The team didn’t announce which chassis will the opt for, since KTM will pull out of the 2020 Moto2 season.