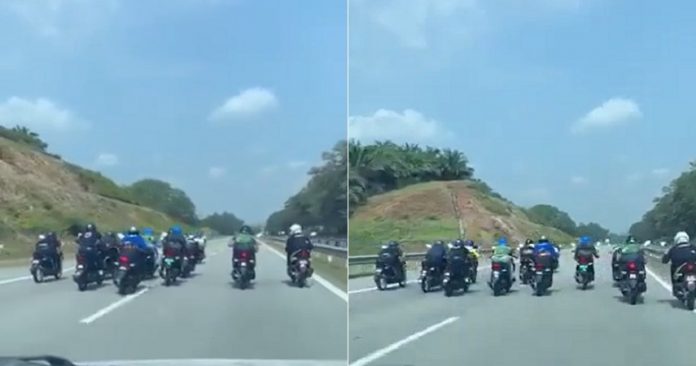 We received some kurang ajar (read: barbaric) responses when we wrote an article about how us motorcyclists can irritate the public and other road users. But look at these guys. They hog the entire road and refuse to give way to other traffic.

A car driver caught the footage of a large group of motorcyclists on the East Coast Highway (LPT) pulling off this stupid stunt. The riders in the group seemed to relish in riding prone in each other’s slipstream to gain higher top speeds.

The poster also said that they refused to heed his warning after he sounded his horn. The video was posted to Info Roadblock and shared by another popular gossip portal. Consequently, it has since gone viral. This is not the way to achieve 15 seconds of fame. Predictably, Malaysians are well-known for their caustic comments including a few which threatened to “run over” such groups with their vehicles.

It’s a dangerous act to carry out even without blocking the traffic. A slip by one rider or a couple of guys hitting each other will send the whole group down. Needless to say, everyone will get hurt or worse, getting hit by other traffic. Say, a truck.

Not only that, it sullies the name of all motorcyclists. Drivers of other vehicles wouldn’t give a second wink to differentiate between the good guys and the bad guys: Everyone is the same! That’s the human nature to generalize everything he sees or hears about.