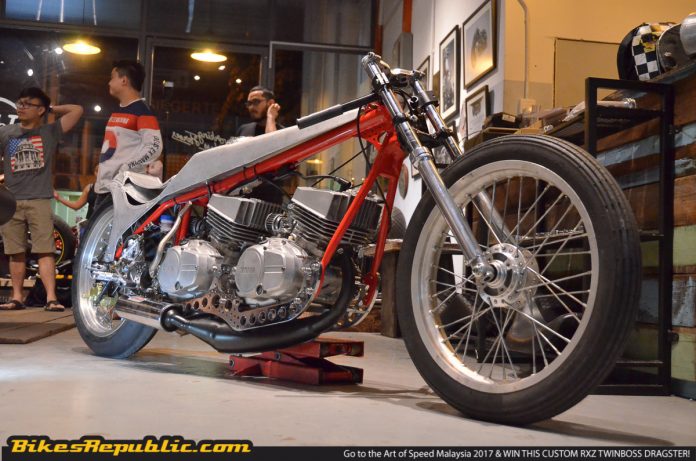 This year’s Art of Speed Malaysia 2017 will be giving away a very special grand prize on Sunday in the form of a Yamaha RXZ Twinboss dragster motorcycle.

The RXZ Twinboss dragster is powered by two two-stroke engines which run in tandem in a combined capacity of 270cc which is equivalent to a middleweight four-stroke sports bike by capacity.

This year Art of Speed will be held from 29 to 30 July 2017 at MAEPS, Serdang so be sure to be there when they announce the lucky attendee to bring this baby home! 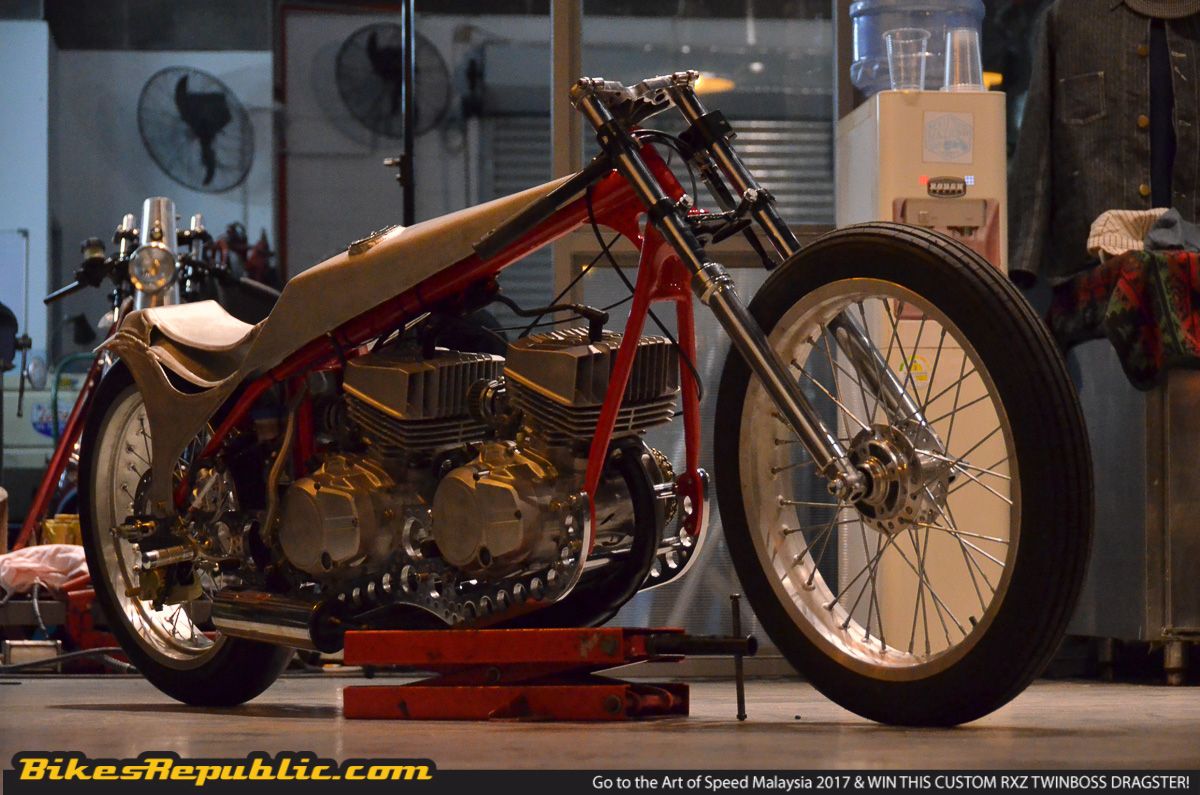 As Malaysians who are deep in the motorcycle scene or industry, there’s no denying the fact that two-stroke motorcycles play a huge role in the how the motorcycling scene has developed through the years. While other motorcycles do play their own respective roles, the two-strokes have been in the scene longer than anybody else and have created both good and bad reputations. 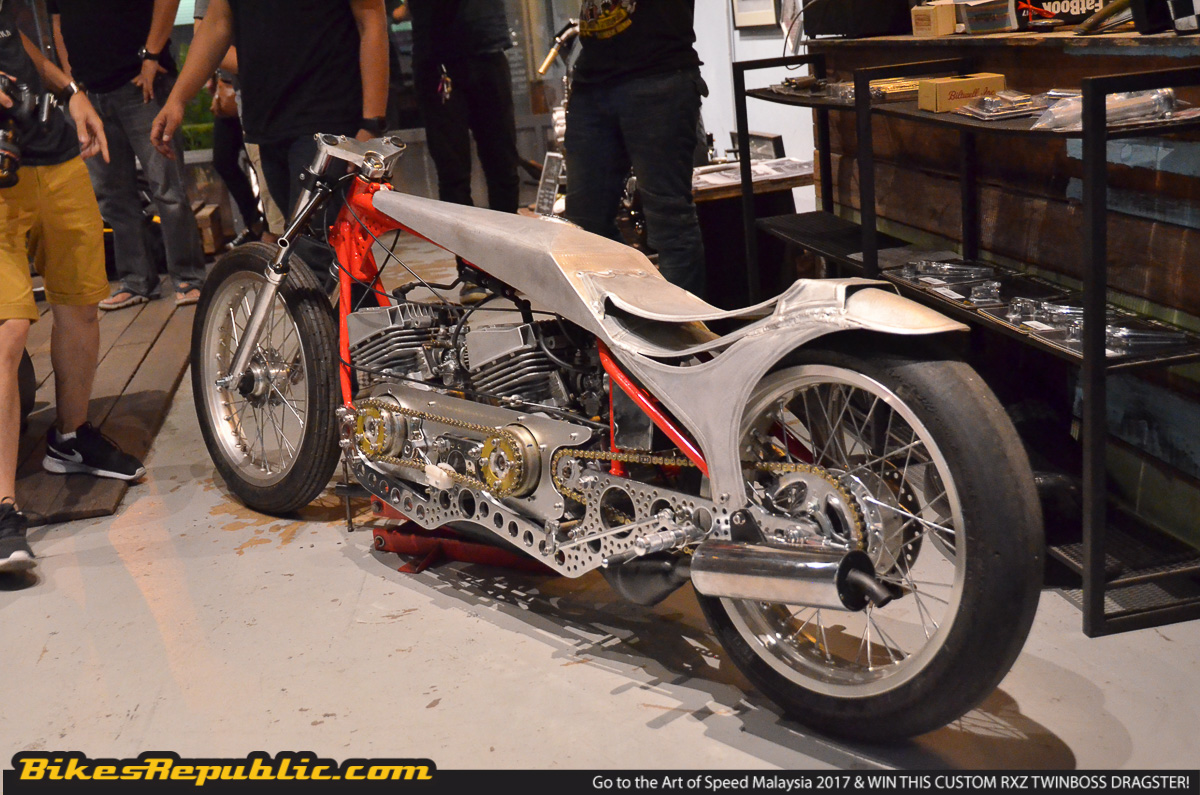 Putting those things aside, one of the legendary motorcycles of all time in the Malaysian scene has got to be the Yamaha RXZ. Ever since its inception, it took the hearts of young Malaysians by storm. Now, a bunch of mad geniuses have taken the legendary motorcycle to a whole new level. Brace yourselves, things are about to get interesting. VERY INTERESTING. 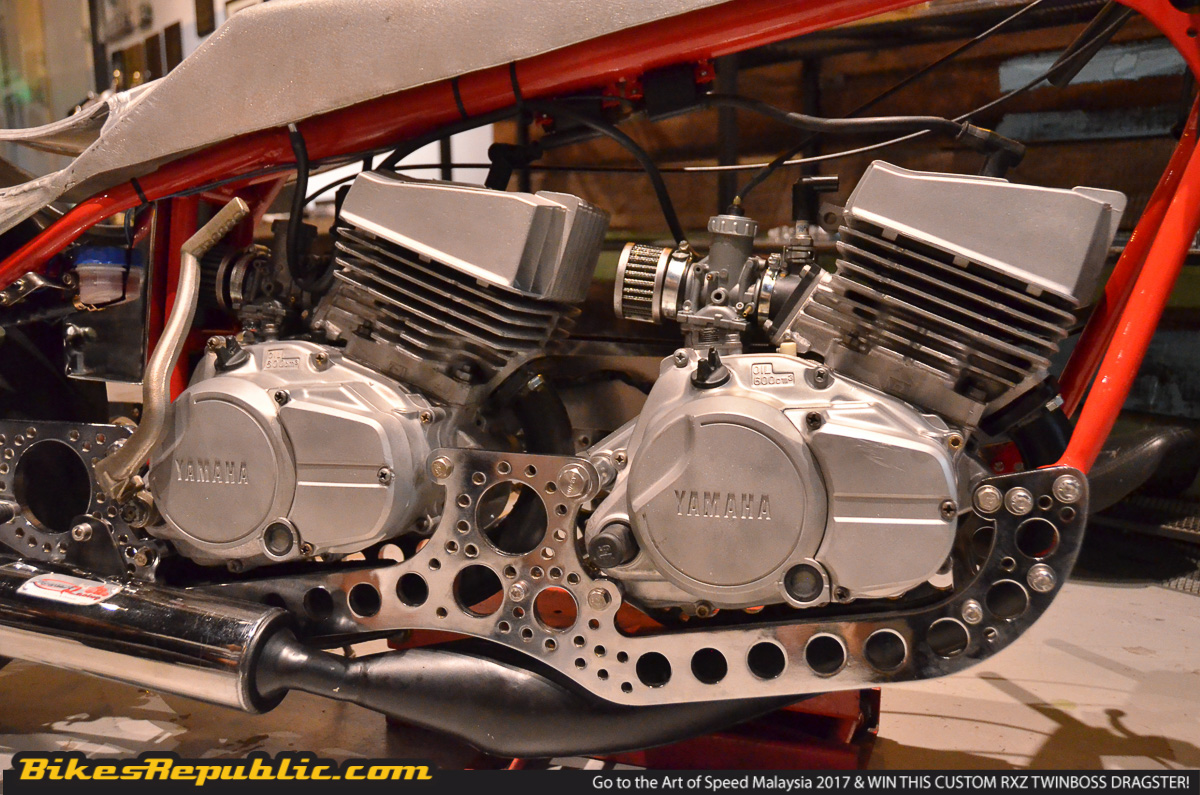 For this year’s Art of Speed Malaysia festival 2017, the founder Asep Ahmad Sastrawidjaja has announced that they will be giving out a very special bike as this year’s grand prize giveaway. This year, one lucky attendee will be bringing home a twin-engine two-stroke custom drag bike dubbed the “Yamaha RXZ Twinboss”. 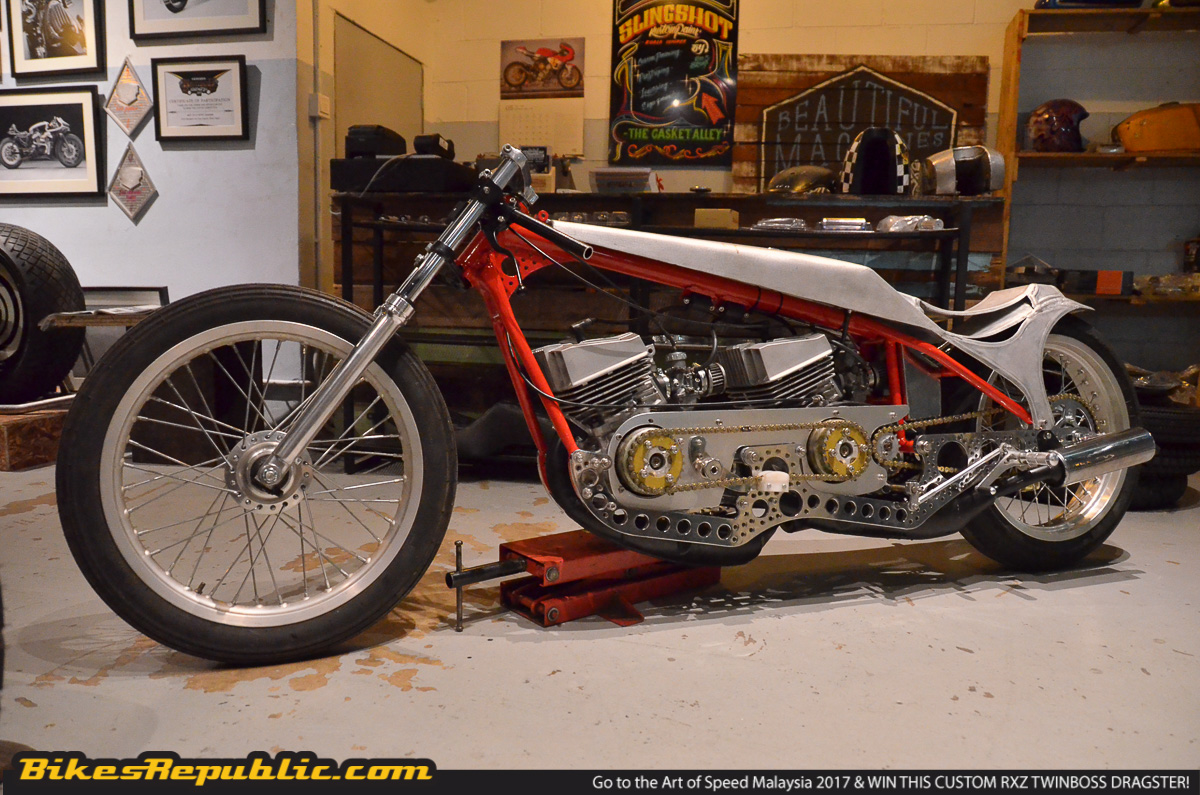 The idea came to mind as Asep want to stir things up a bit in a huge way that’ll hopefully send ripples of excitement into the Malaysian custom scene as well as the general motorcycling industry. According to the project manager, the idea came earlier in the year and by April, they’ve managed to source all the basic parts including two Yamaha RXZ bikes specially for the dragster. 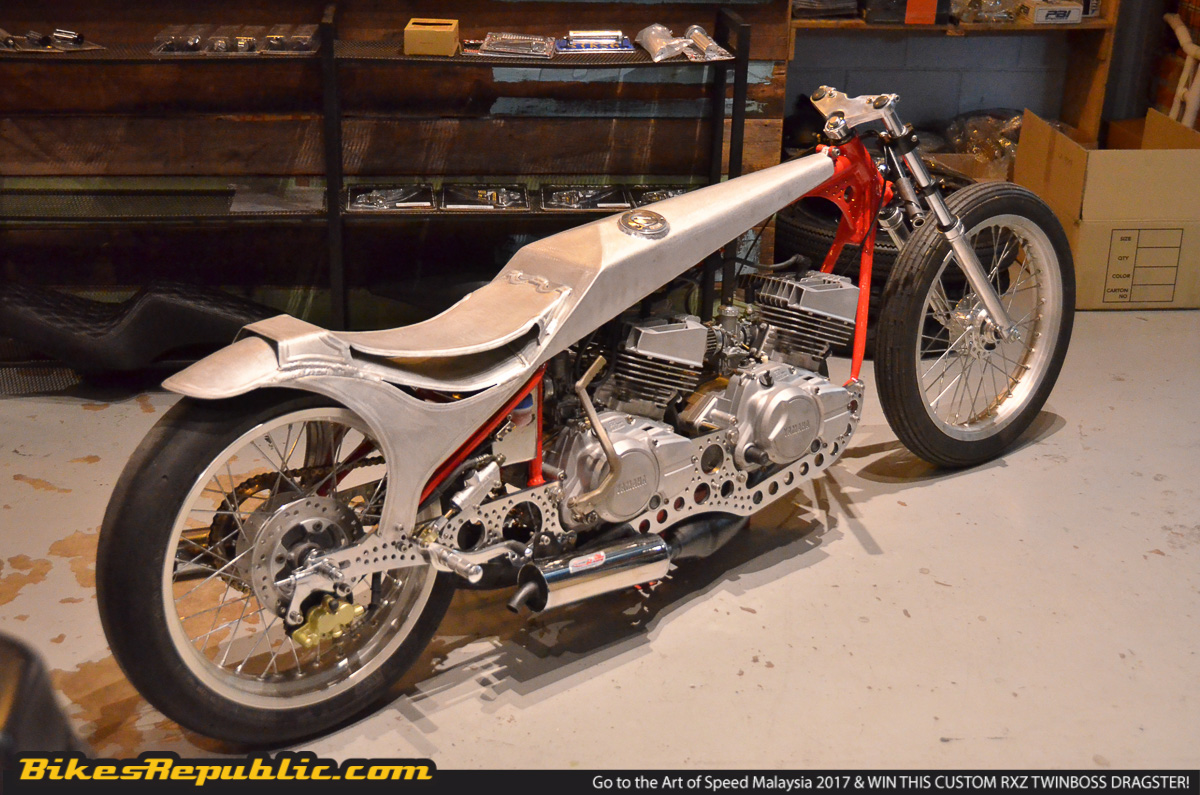 Asep stated that the fully-custom bike aka “RXZ Twinboss” will the grand prize giveaway as a token of great appreciation for all the years filled with support from all the fans and enthusiasts alike. As you can see, every single part of the dragster has been rebuilt from the ground up and it looks menacingly beautiful. 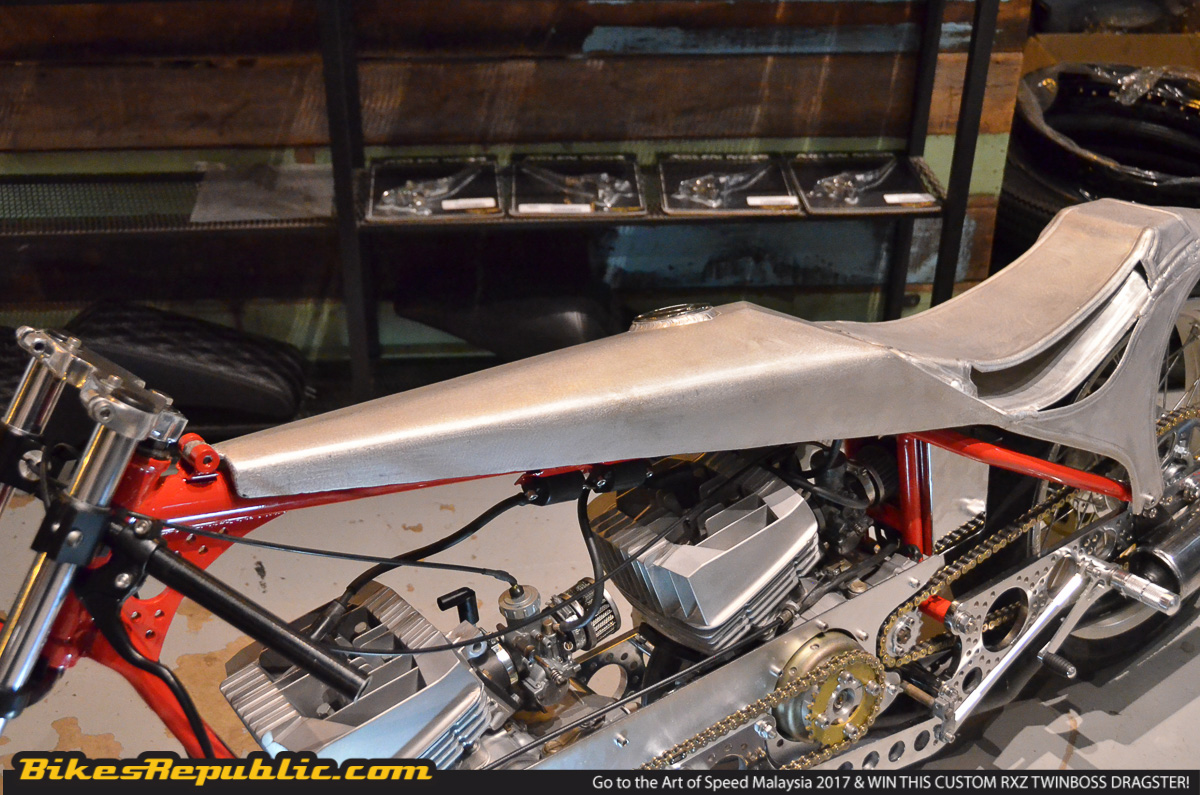 The main engineer being the RXZ Twinboss is our very own local lad Irwan Cheng from FNG Work located in Ipoh together with the boys from Beautiful Machines, Sunway. They’ve also obtained a lot of assistance from Amir Hashim, the powerhouse behind Legend Racing Garage to help bring everything together. 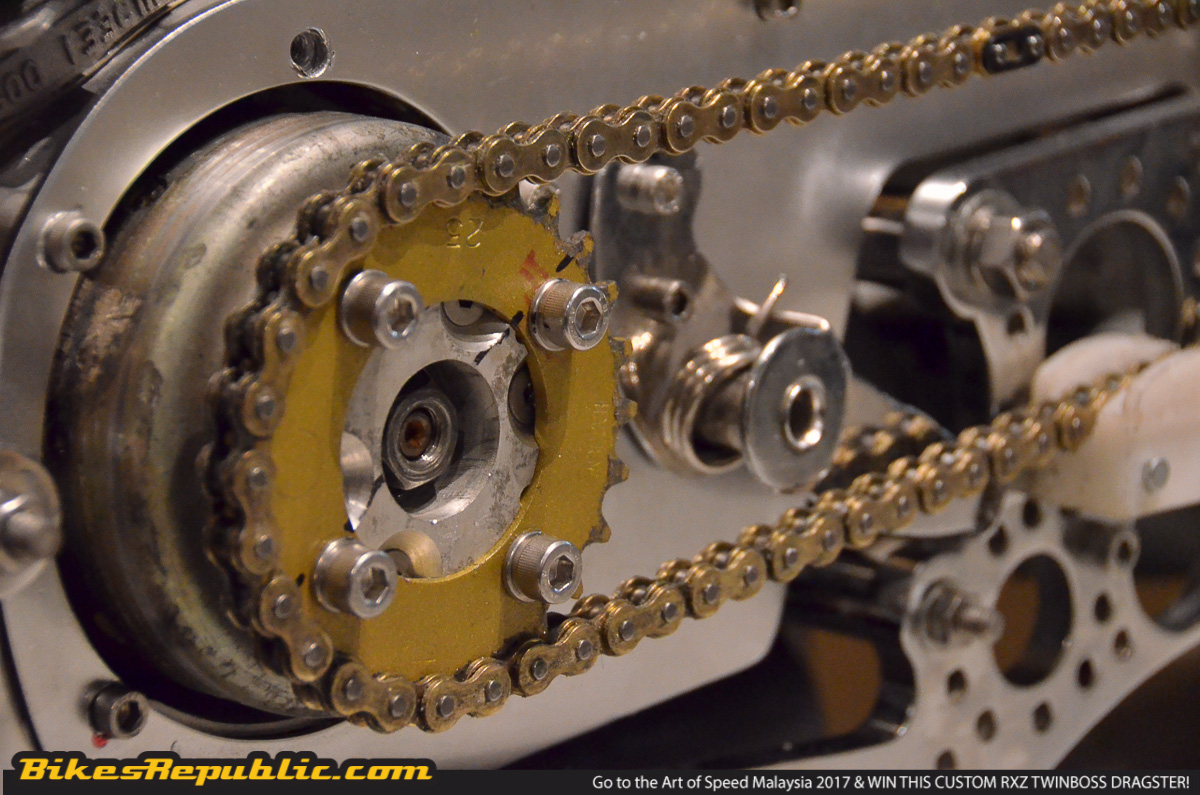 In terms of cost, Asep said that he has lost count after spending over RM40,000 in getting the bike ready for this year’s Art of Speed main event. Together will all the help, assistance, experience and invaluable knowledge and know-how, the RXZ Twinboss is a priceless as the rarest gem on Earth. It is truly one of a kind. 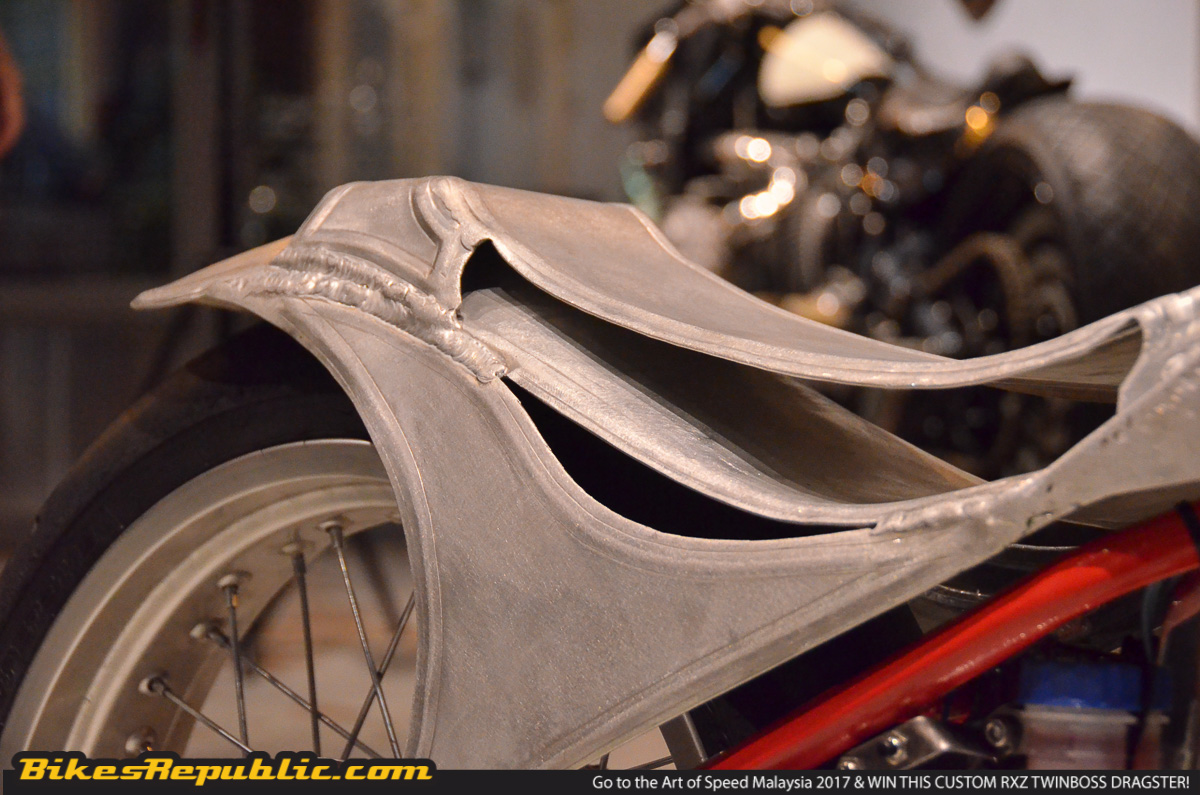 The combination of two two-stroke 135cc Yamaha RXZ engines were able to perform in tandem thanks to the engineering feat successfully made by connecting the primary drives using a final drive chain setup connecting the two engine blocks together. In terms of capacity, the bike collectively has 270cc which is almost equivalent to a middleweight four-stroke sports bike. 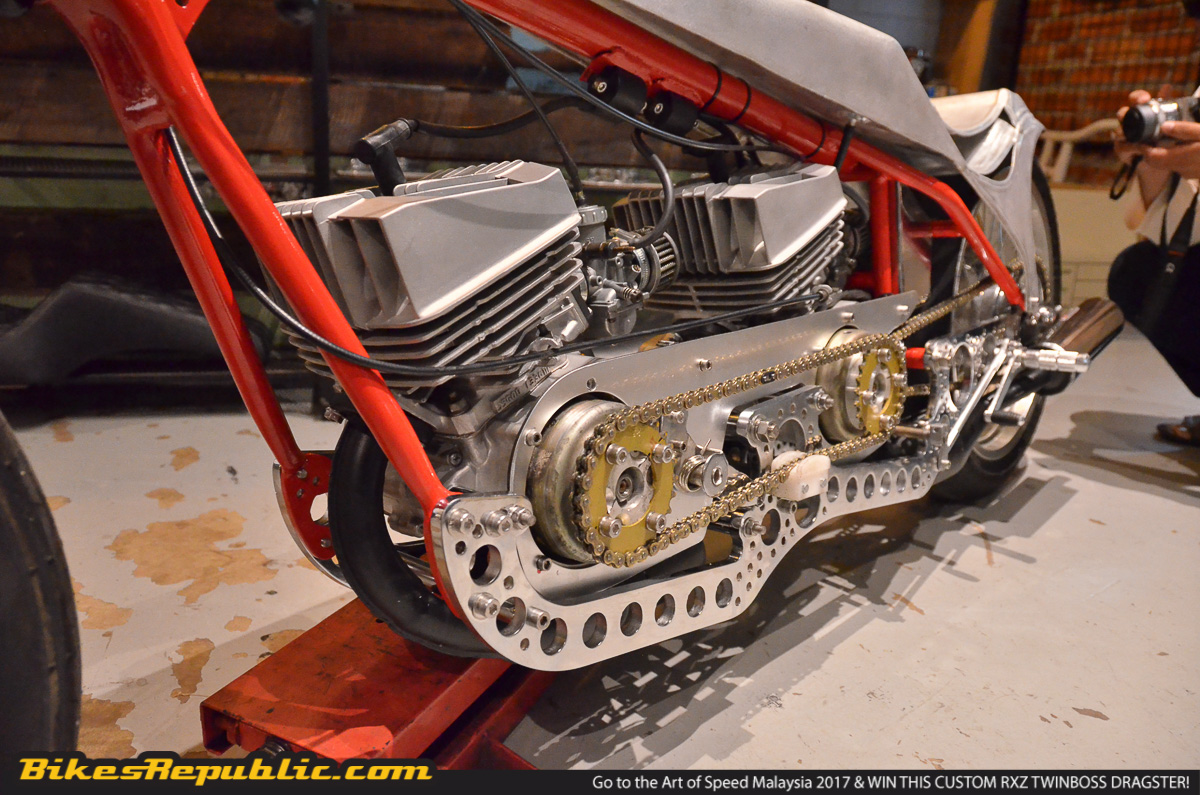 The fenders, fuel tank and out of this world seat were all hand-made using aluminium inspired solely on achieving two things; to look and go as fast as it can possibly go. It is a dragster after all. We also need to point out that the entire bodywork can be lifted to gain access to the engines easily in a similar fashion as you would normally see from top fuel funny drag cars in the US. 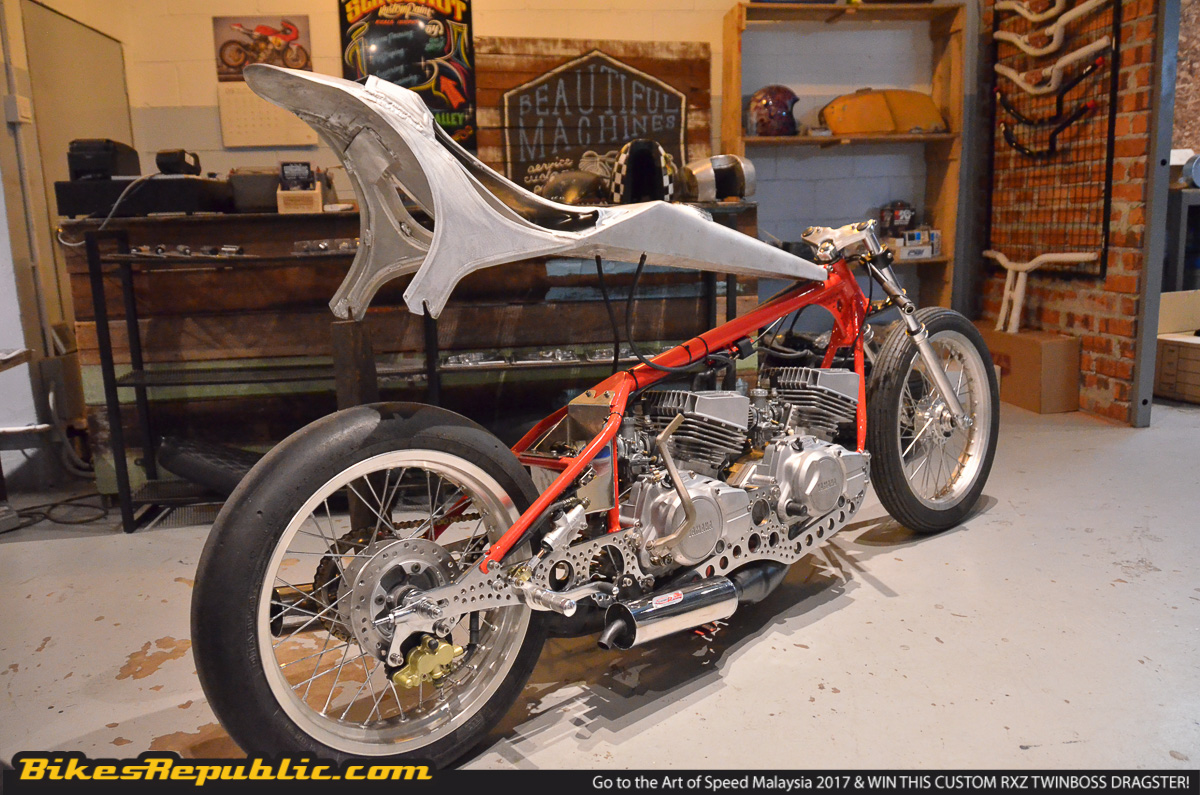 Other parts have been made using CNC water jet blasts and Catia computing software for maximum accuracy, rigidity and performance. Those holes you see there were made precisely using the latest engineering technology to bring the some state-of-the-art performance into the build. 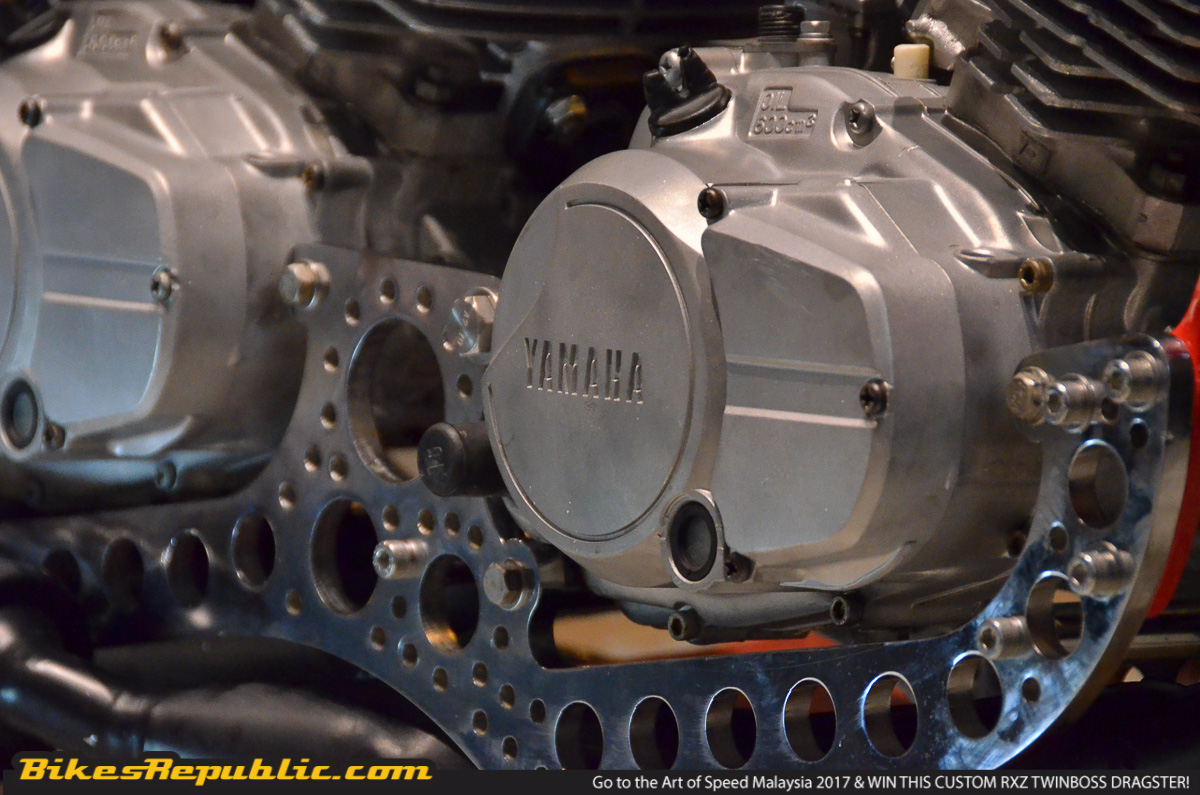 A great bike deserves some badass rubber and when you look at the rear, you’ll find a Pirelli Diablo Supercorsa super slick tyre to give maximum grip as you shoot down the drag strip. The front fork has been taken from one of donor Yamaha RXZ but has been dramatically chopped and customised specially for this project. 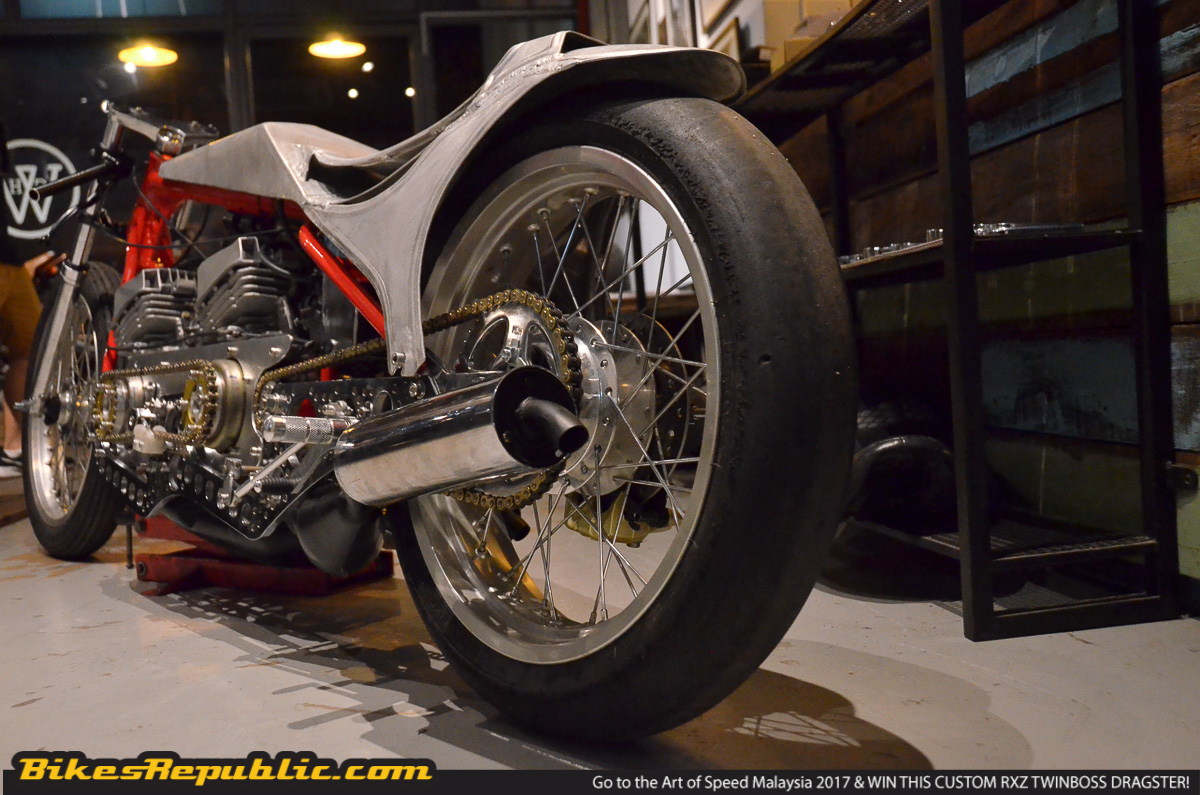 The lucky folk who gets to bring this baby home will get a key that won’t help start the bike but instead access the fuel gas cap taken from a motorboat. 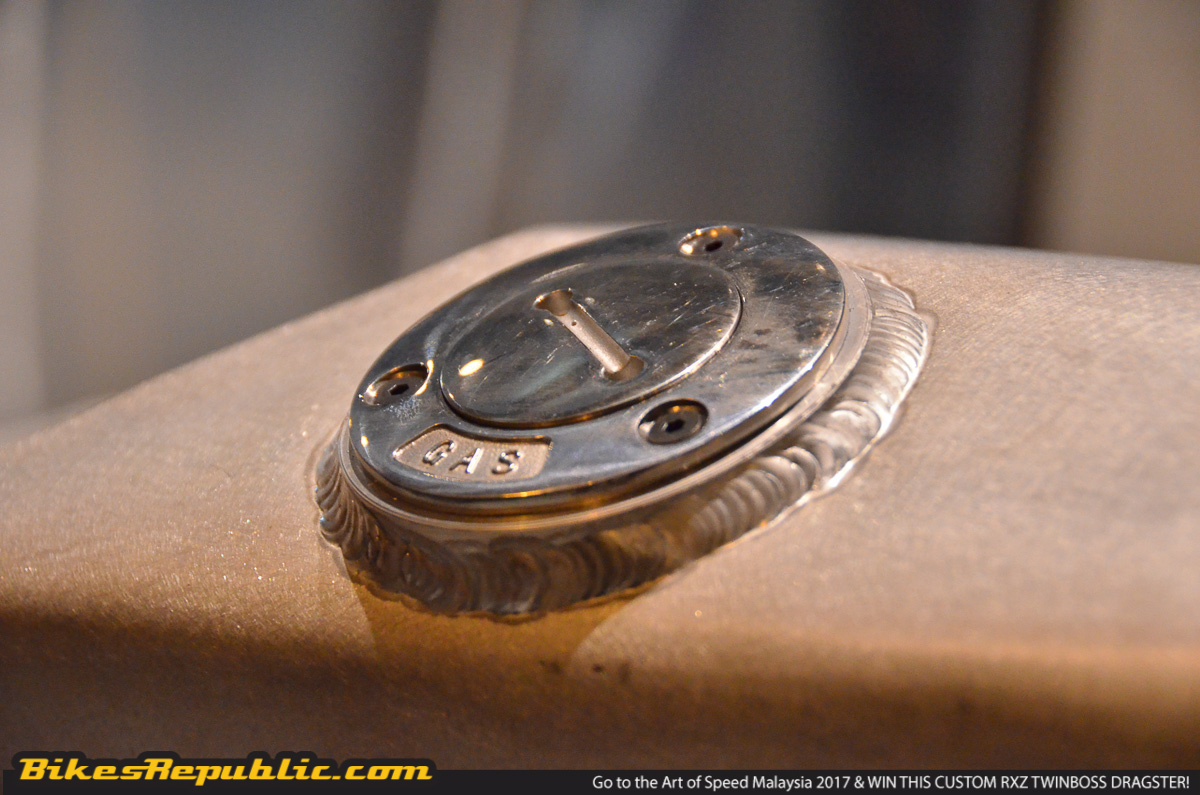 In general, the RXZ Twinboss is near completion in terms of mechanical aspects. The rest of the facade and paint job will be completed during the two-day Art of Speed 2017 which will be held at Malaysia Agro Exposition Park Serdang (MAEPS) this 29 and 30 July 2017. 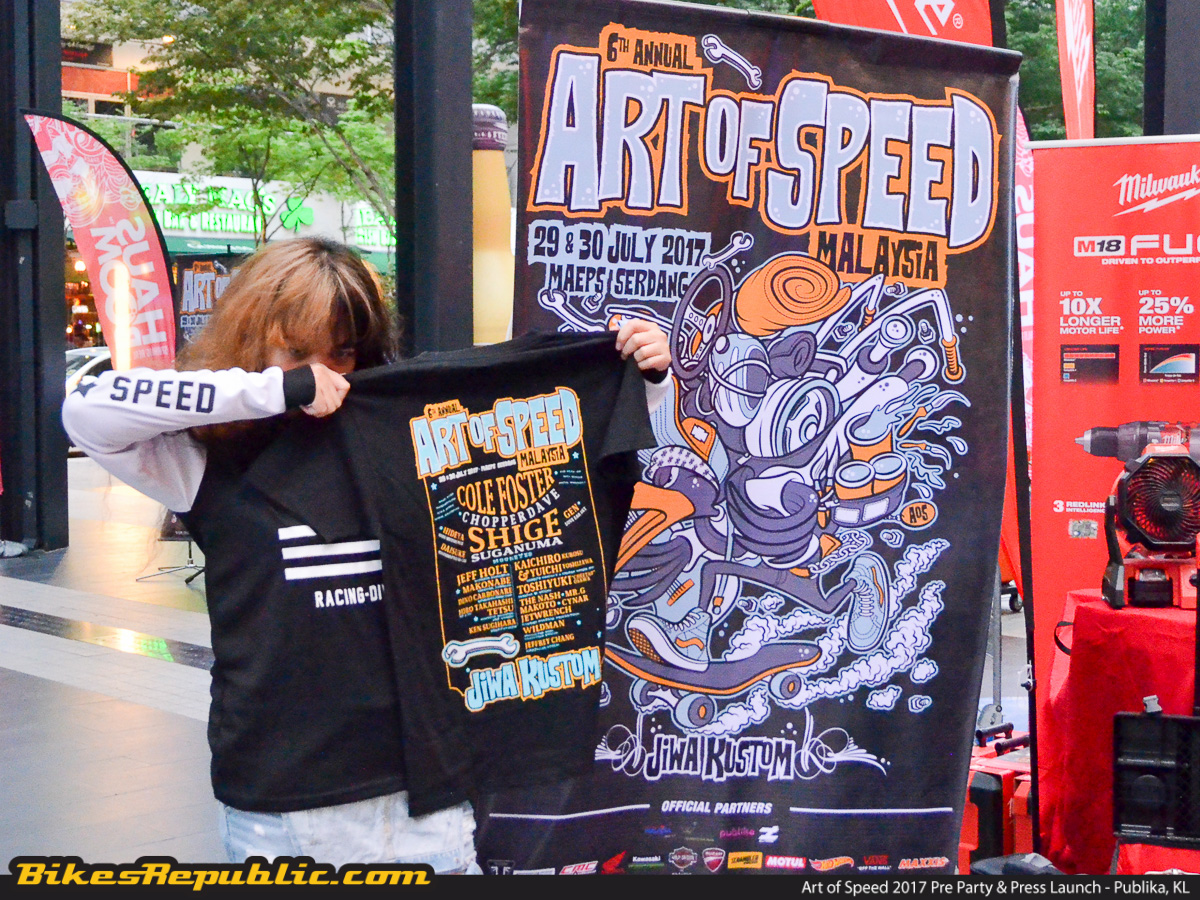 Two bikes will be given away during that weekend and the RXZ Twinboss will Sunday’s ultimate giveaway. Each attendee who purchase a ticket for only RM15 will get one entry into the lucky draw so the more tickets you buys, the more chances you have in getting the bike. Our advice? Study the annual event carefully as there might be a few questions coming your way to make things more interesting. In short, you need to work it in order to get it, baby. 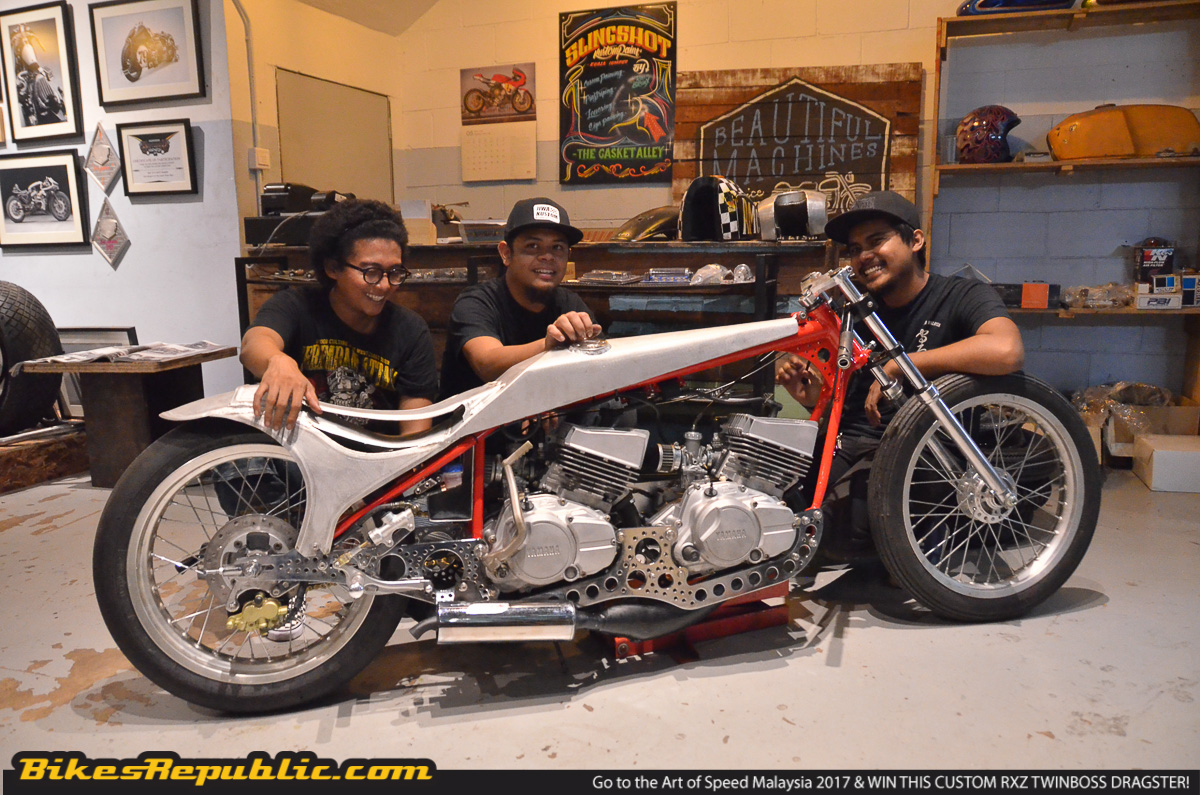 All the people involved in making the RXZ Twinboss into the real world hope for one thing; that the winner will test the living daylights of the dragster as it is made for racing and not just for show. A lot of us were there to witness the bike coming to life and we can only say one thing, the hype is REAL.

Everyone who’s interested in seeing this bike live and ‘in your face’, do come to the Art of Speed 2017 festival this 29 and 30 July 2017 held at MAEPS, Serdang. There’s no better year to get yourselves exposed the Malaysia’s largest custom ‘anything’ gathering that has been gaining a lot of attention and support from the rest of the world. See you guys there! 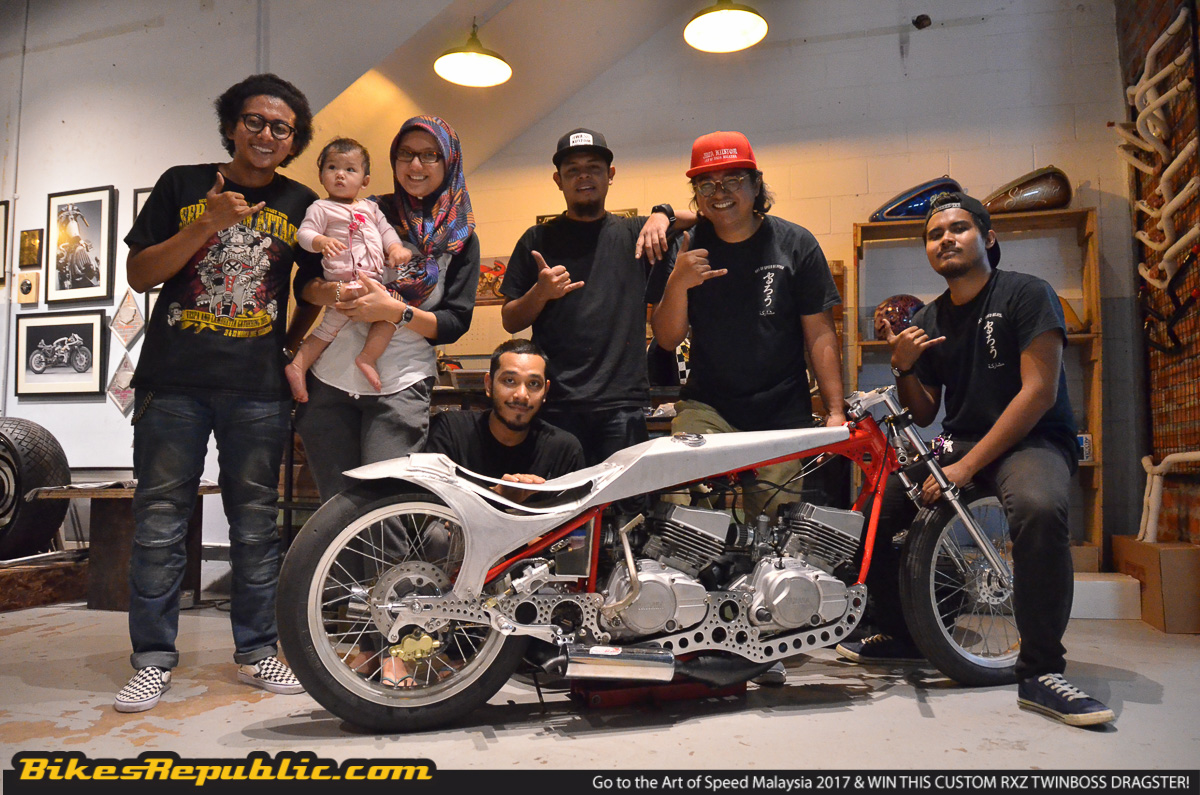 To know more about Art of Speed 2017 festival, CLICK HERE. 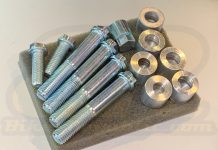 Where to Look for Brake Caliper Lock Bolts? Right Here!