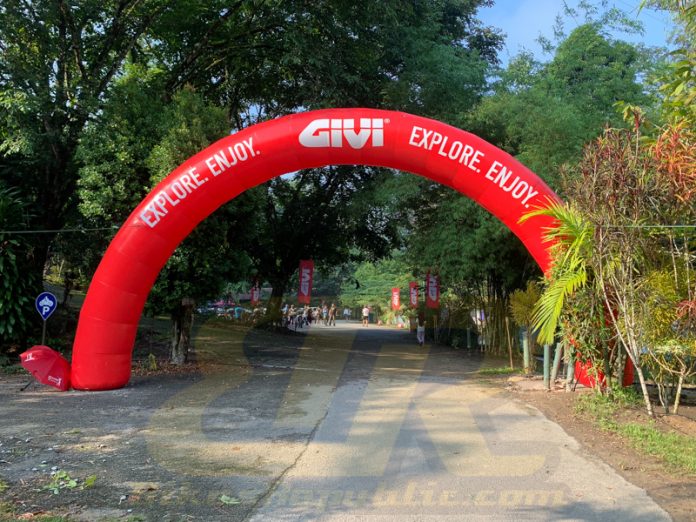 GIVI Asia Sdn. Bhd. set up an online community recently and it has seen a meteoric rise since then. As such GIVI organized the GIVI Mega Camp & Ride 2019 as a way for the community members to come together to enjoy the GIVI lifestyle.

There had been a number of Ride & Camp activities besides charity rides thus far. All saw enthusiastic participation. 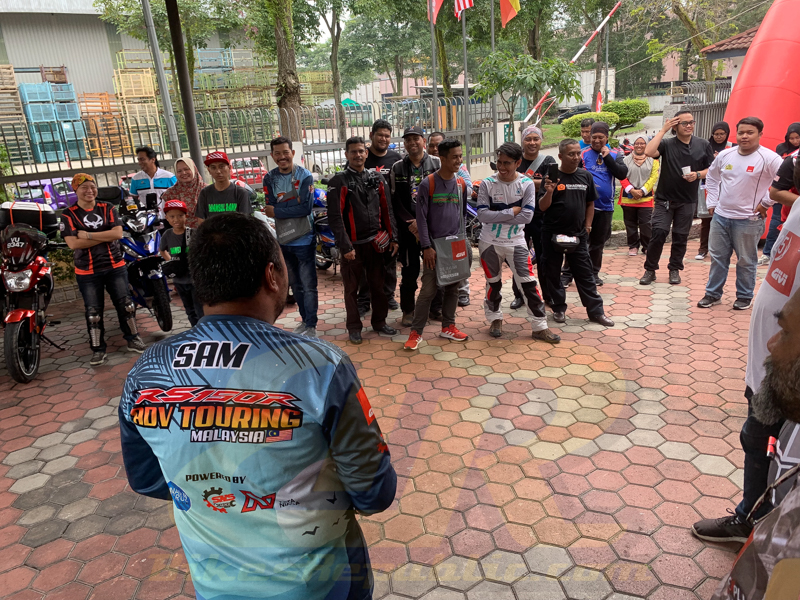 GIVI organised such an event at Late Lembik this time around.

As per tradition, the ride began from the GIVI headquarters at Bukit Beruntung near Rawang. There, participants were provided with light breakfast and refreshments. Each received a “number plate” and GIVISTA t-shirt upon registration. There was a good mix of large and small capacity motorcycles, all fitted with GIVI cases but there were those fitted with almost everything in the catalogue. 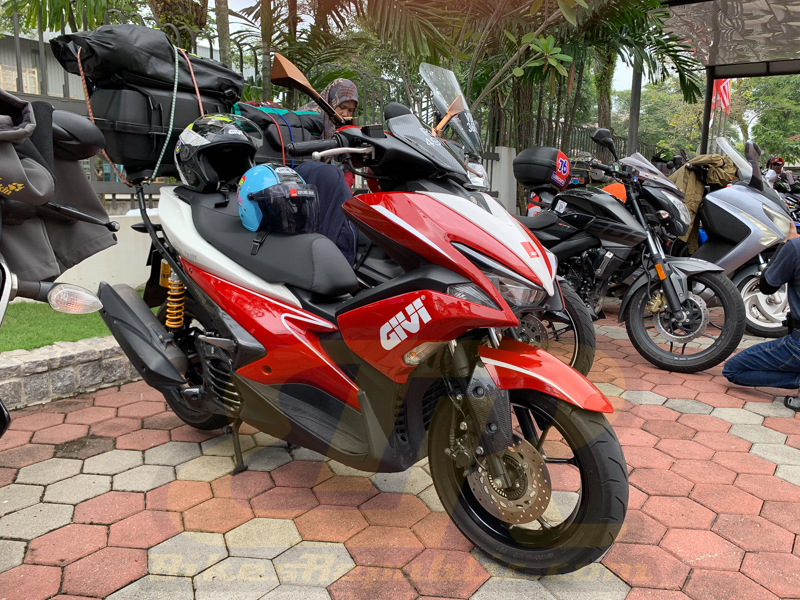 Sam Sharman, the Marketing Manager gave a briefing on the ride and activities. Participants pasted the number plates to their bikes so that marshals could keep count of those following. Such system was also used during the GIVI Malaysian Adventure 2019. 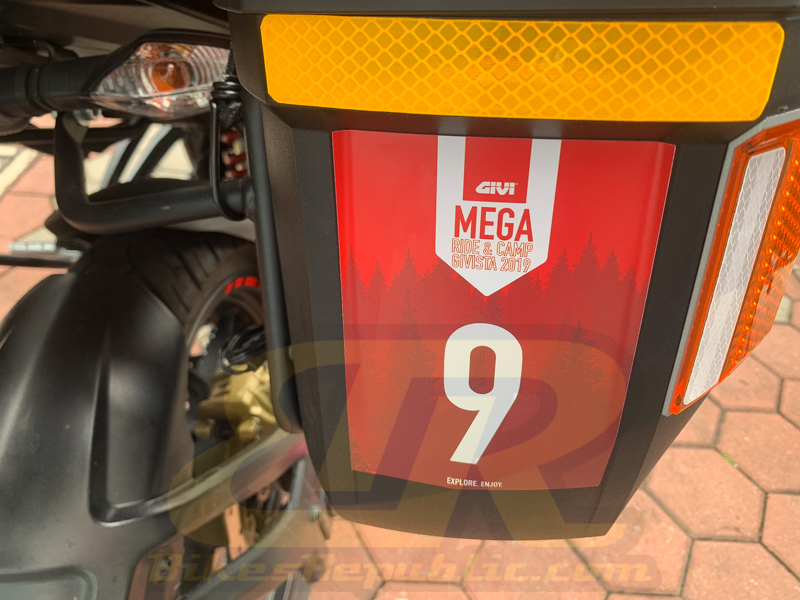 Speaking of the Malaysian Adventure, this ride was guided by the same head marshal.

The ride itself was a lot of fun for the riders as they crossed through Batang Kali and headed up to Gohtong Jaya, before descending on Karak Highway. Late Lembik laid close to halfway between Bentong town and Sungai Koyan.

Participants found the tents already pitched by the hardworking GIVI crew when they arrived in the late afternoon. The rain didn’t dampen anyone’s excitement. 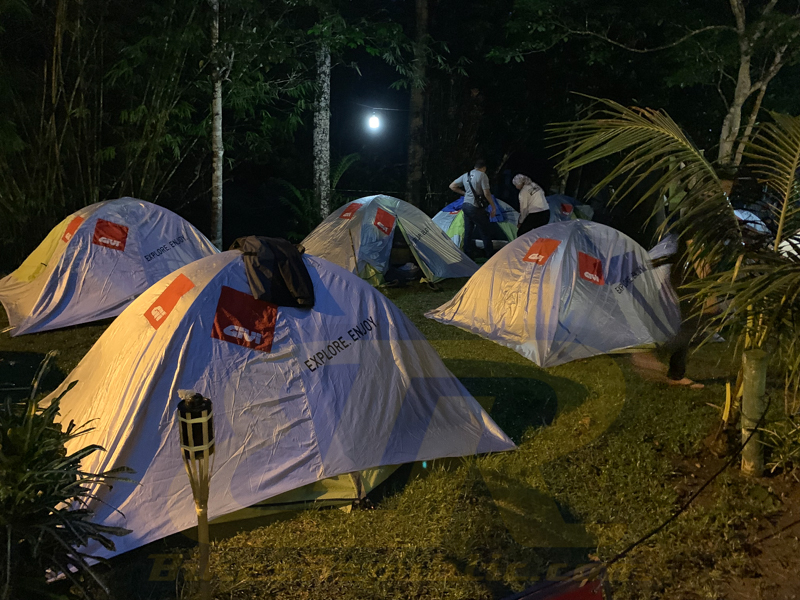 It was dark soon, so GIVI showed a movie in the community hall. 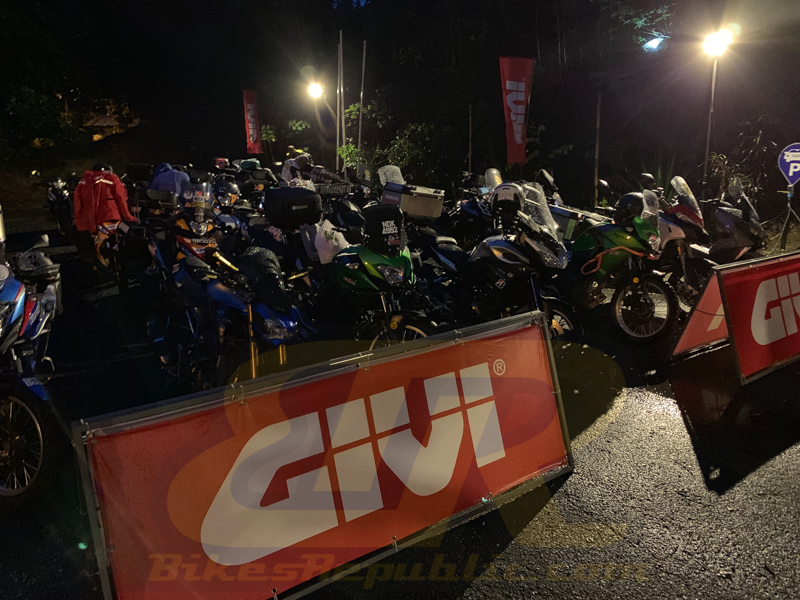 GIVI provided breakfast again the next morning, while waiting for the off-road class to begin.

The instructor, Remy Buragas, showed up soon and conducted a short on-bike demonstration. The riders were shown the correct ways of handling the motorcycle in off-road conditions. 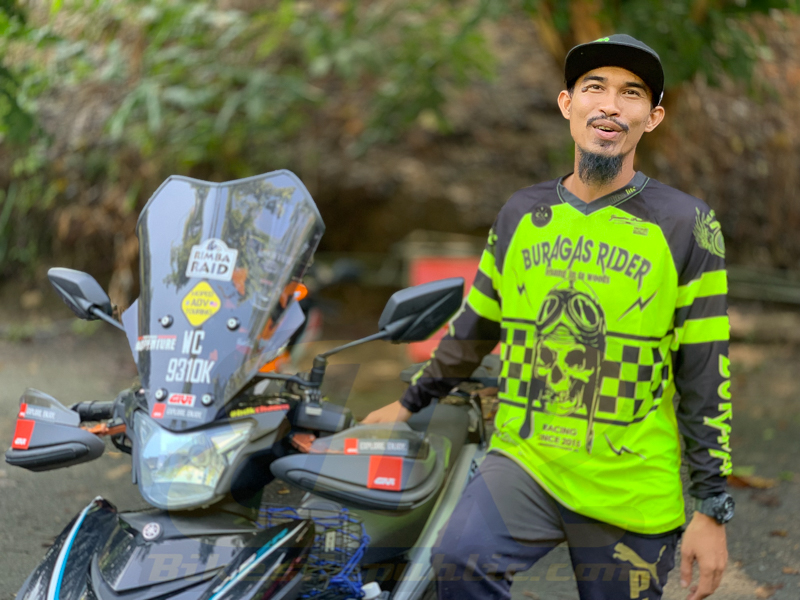 It was at this time that we saw a number of bikes with extended suspension. These guys lived up to GIVI’s Explore, Enjoy ethos. There were also riders who competed in the GIVI Rimba Raid. 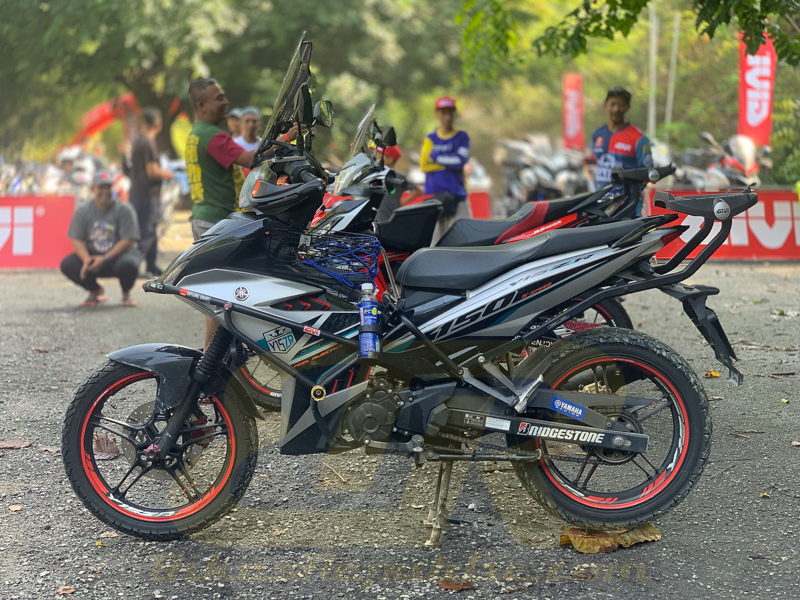 The trail consisted of easy and medium difficulty sections. But the incessant rain had made it muddy and slippery so certain sections were abandoned. The riders took to it with glee, some of them even had road tyres on. 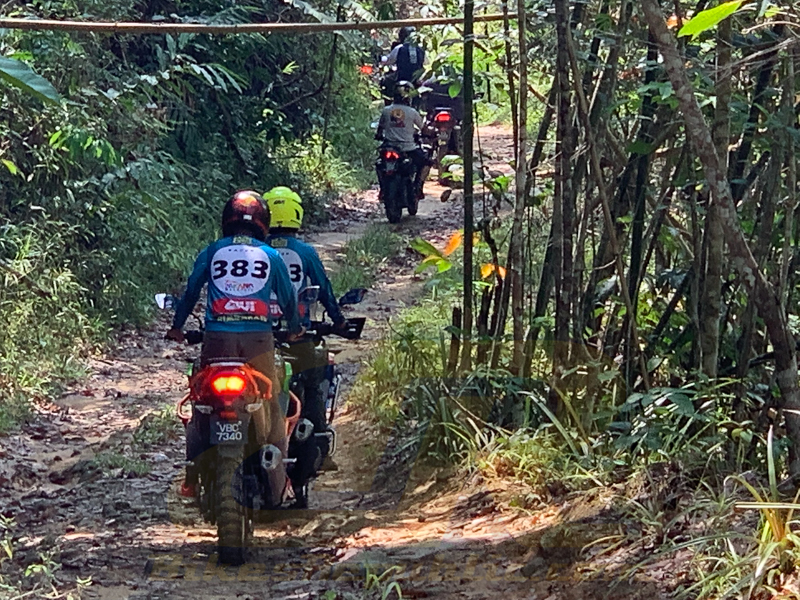 By now, the food trucks have shown up. 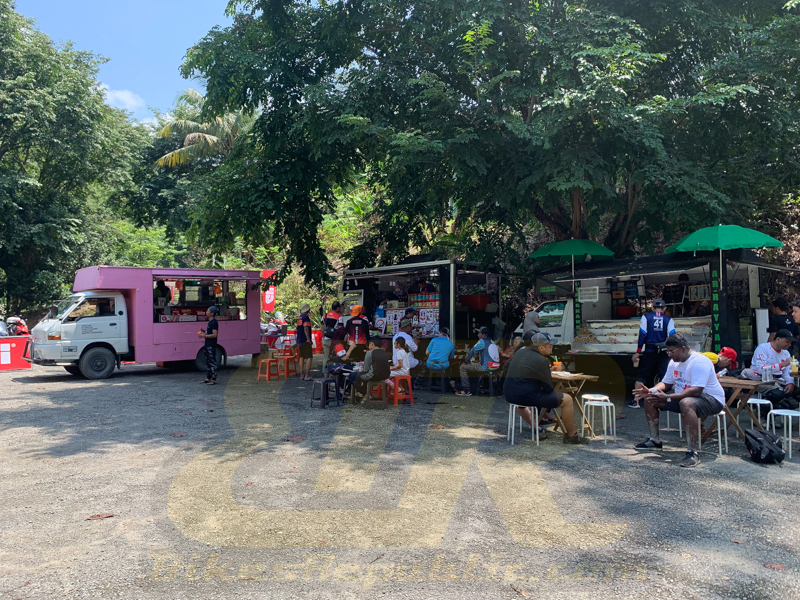 Some free time was provided and the participants took the opportunity to swim in the river.

Come dinner time, the GIVI crew fired up the BBQ. Participants ate to their contention since the food trucks were still there. 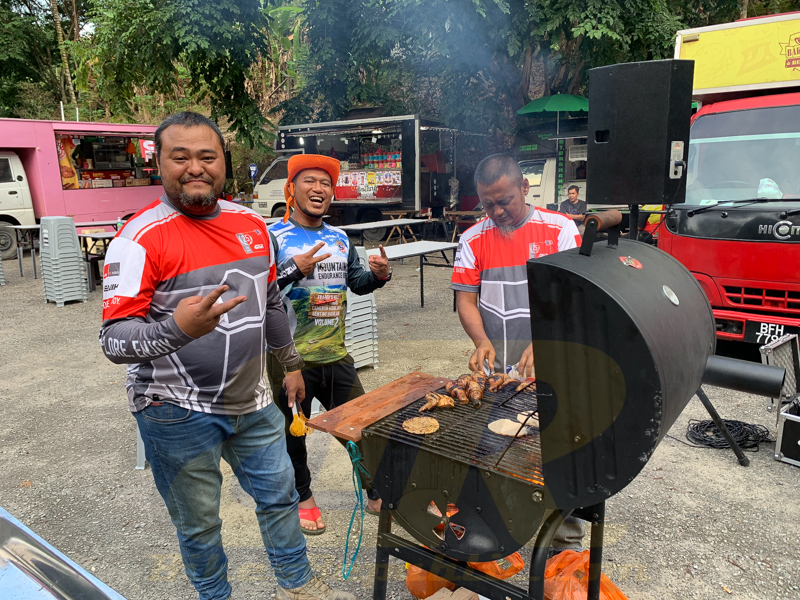 A sharing session was held after dinner. Sam described the role of GIVISTA Community, while another two shared their touring experiences. GIVI Ambassador Anita Yusoff gave a talk on her Dream Global Ride. Sam and Anita proceeded to unveil the new GIVI Vista helmets before ending the session. 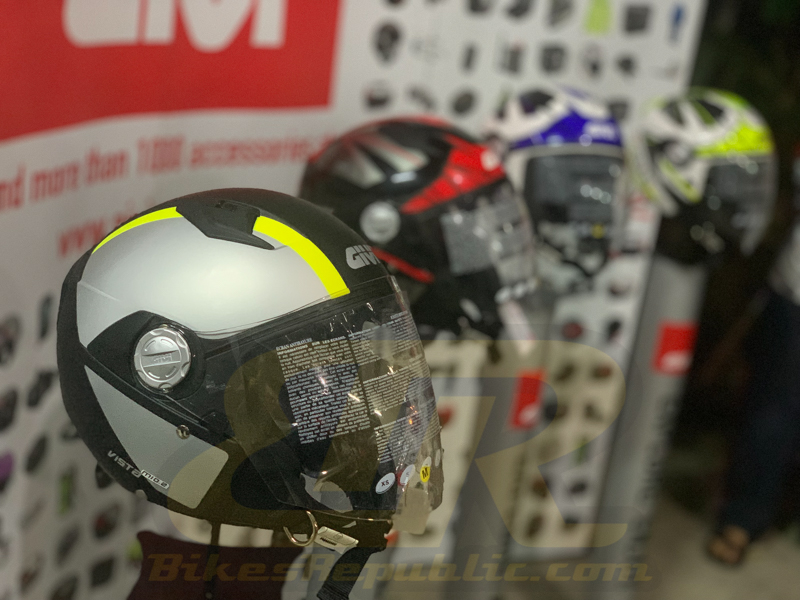 A basker band took over the proceedings to entertain the crowd.

The activities concluded the next morning. Everyone headed home happy and safe.

The community is made up of GIVI consumers, regardless of type of product and motorcycle the ride. Being an open group, members are free to share their experiences of using GIVI products and travels.