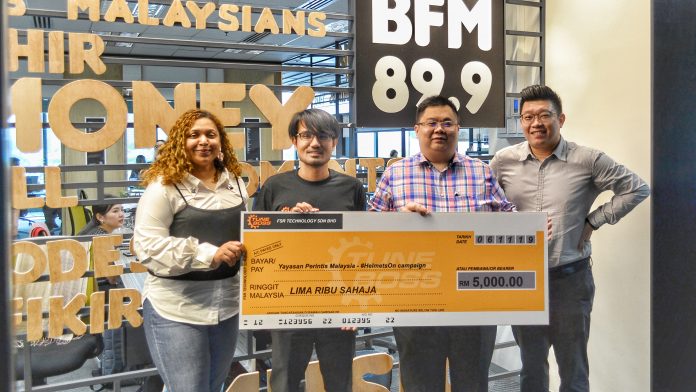 A mock cheque presentation ceremony was held at the BFM radio office, in Menara Ken TTDI between Farhan Ali of FSR Technology to Dato Lawrance Low of MyPerintis on the 20th of November 2019.

“It is a way for us to give back to the community that helped us grow and this campaign allows us to be part of the solution, to help those who need it,” said Farhan, FSR Technology CEO.

In March 2019, MyPerintis, a non-governmental organisation, joined the Ministry of Education to launch a helmet and road safety campaign called the Adiwira Topi Keledar Pilot Programme.

The pilot campaign was a considerable success – distributing 1,500 helmets to 30 primary schools in Kota Bharu, Johor Bharu and Klang Valley, and educating over 27,000 children about the importance of helmets and road safety.

Following the successful pilot programme, the initiative has been renewed with the support of BFM89.9 in hopes of reaching more than 200,000 children in 200 schools nationwide and equipping at least 50,000 children with correctly sized helmets.

The campaign pledges to buy children motorcycle helmets at RM50 each, and to be given out to children in need of the safety device.

Statistics from the Malaysian Institute of Road Safety Research (MIROS) show that only 15% of Malaysian children wear proper safety gear when riding pillion on their way to school.