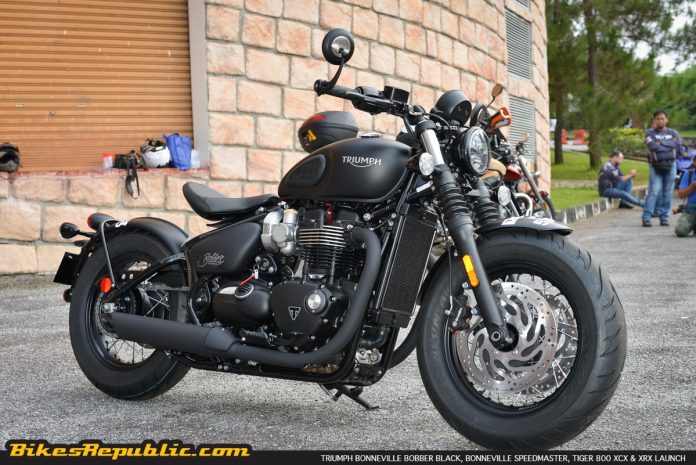 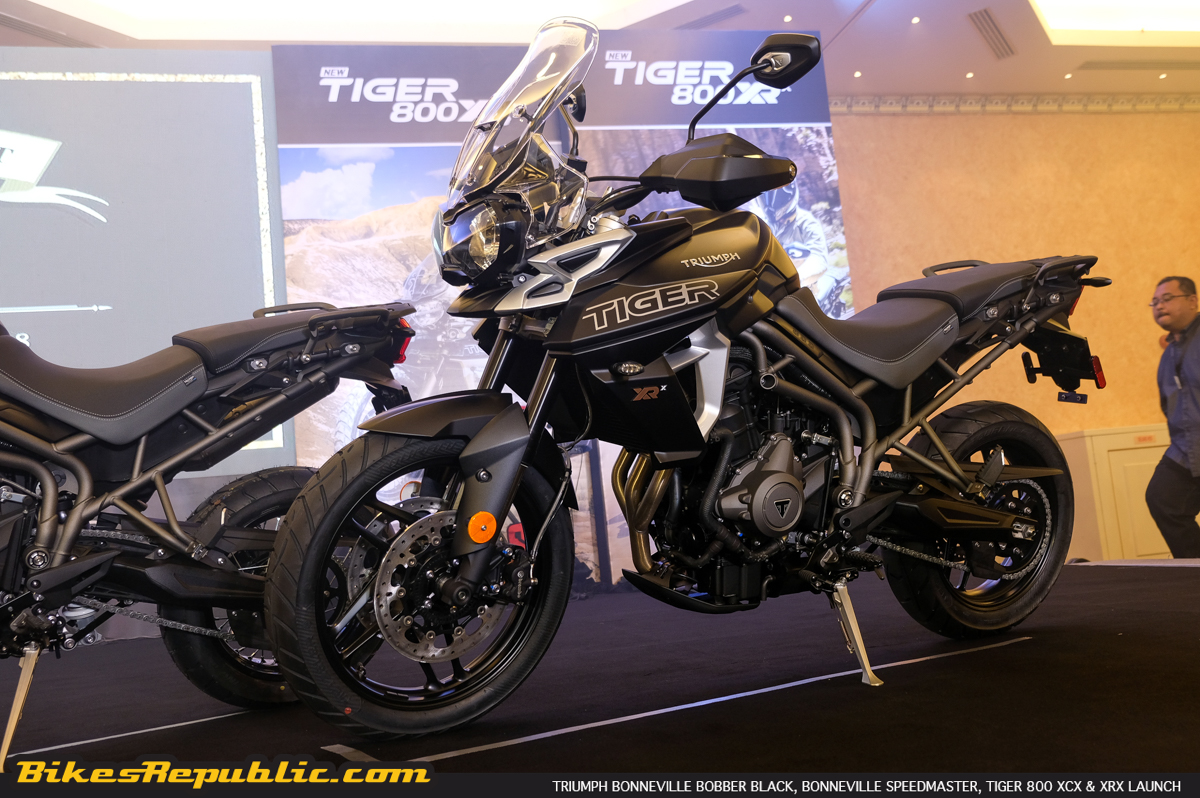 The launch coincides with the Triumph Motorcycles Malaysia’s Grand Dinner at the Berjaya Bukit Tinggi resort area. Some 400 Triumph owners attended the event, in addition to us motojournalists.

Please click on the link below for our coverage on the event.

Motojournalists gathered in the early morning to sample the ensemble of new bikes – Bonneville Bobber Black, Tiger 800 XCX and Tiger 800 XRX. We rode from the Colmar Tropicale Convention Center down to the first security check point and back up to the Colmar. Each journalist was assigned a certain bike on the way out and exchanged for another for the return trip.

Anyone who’s ridden up and down Bukit Tinggi will attest to the challenging nature of the road. The lanes are narrow, the corners are sharp, bad road condition in certain sections and there are parts where dirt has been deposited by heavy rains. It’s a real good place to test the handling characteristics of any bike.

Although the test ride sessions were brief, it was enough to draw some preliminary verdicts as we’ve ridden the previous models, a few for more than 500km. However, rest assured that we’ll run extensive tests and reviews in due time, so stay tuned!

First and foremost, the Bonneville Bobber Black isn’t the successor to the massively popular Bonneville Bobber, which happens to be the best-selling model in all of Triumph’s 30-year history.

The “original” Bobber launched for 2016 was already a wonderful bike by all means, featuring modern attributes such as ABS, traction control, Ride-by-Wire throttle, torque assist clutch among others. The highlight of the Bobber is of course the floating rider’s seat. One word sums up the Bobber’s styling: Attitude. 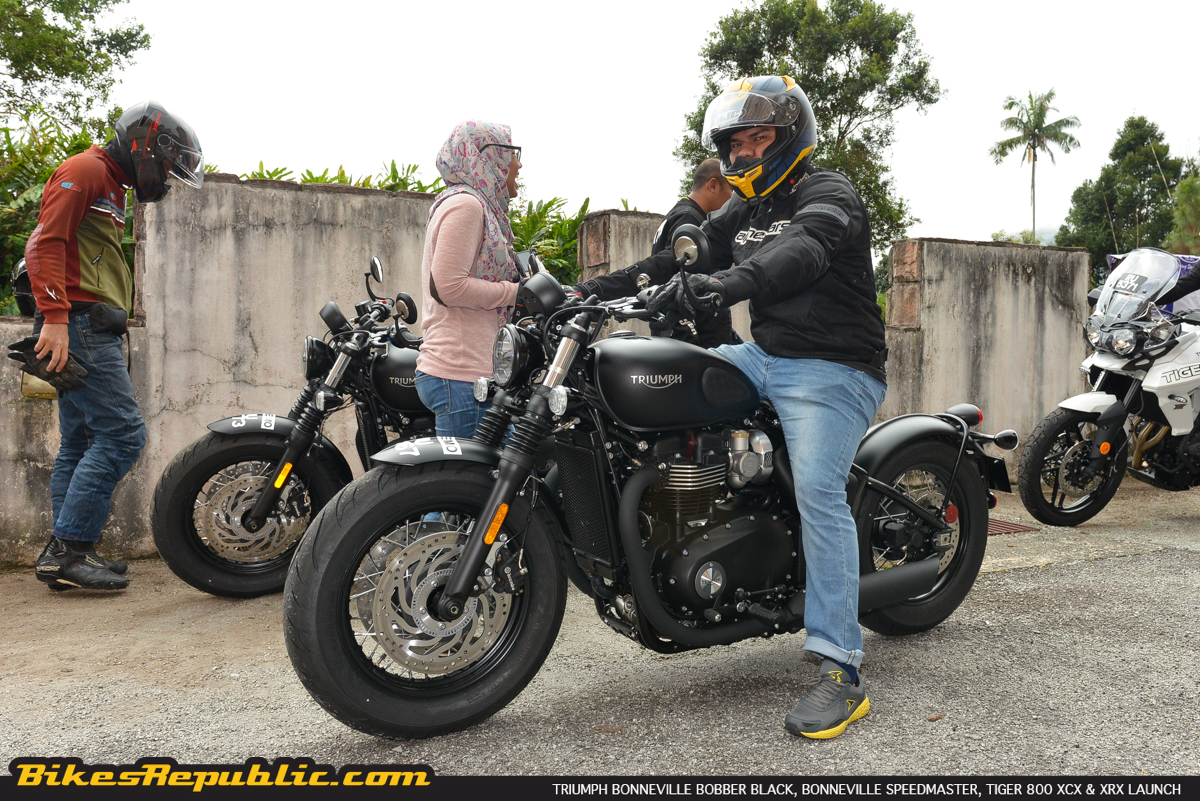 The Bobber Black, however, takes it further. Triumph calls it, “Darker. Meaner. Stronger.” therefore the stance is now more muscular and aggressive.

The 19-inch front wheel has been replaced with a 16-incher, shod with 130/90-size Avon Cobra tyre, specifically developed for the bike. To support the larger tyre, you’ll massive 47mm diameter Showa cartridge forks (like those you’d find on a high-end sportbike) vs. 41mm conventional ones on the Bobber. 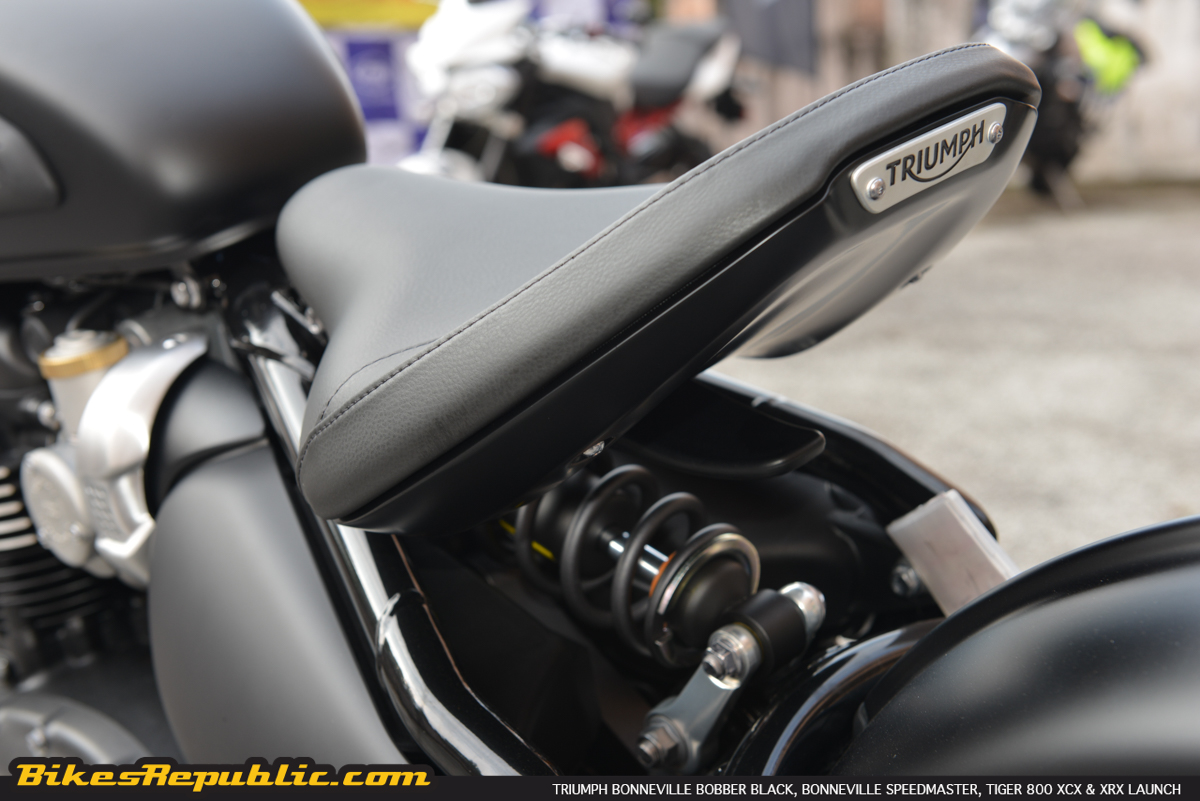 Additionally, there are now dual disc brakes clamped by Brembo calipers. The Bobber Black also sees cruise control added to it which is actuated is by a single button. The headlight is now fully LED with Daytime Running Lights (DRL). 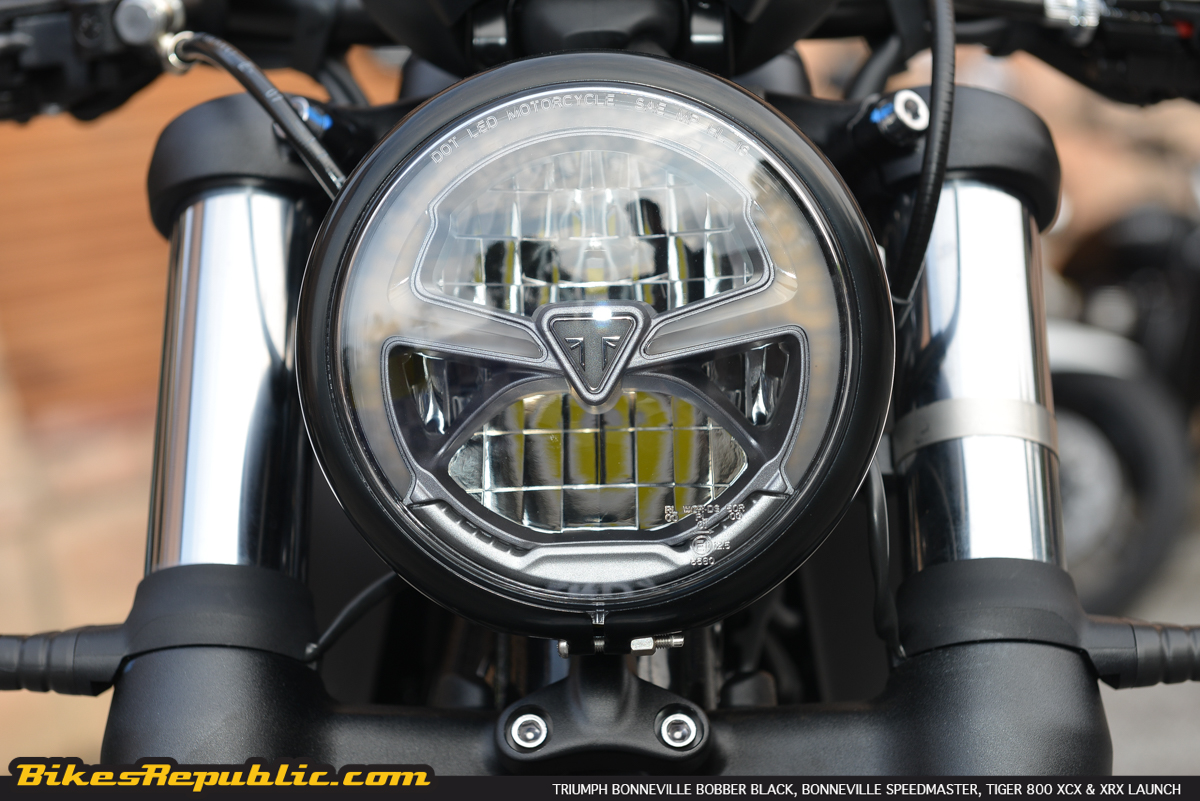 The other distinguishing features of the Bobber Black are the blacked-out theme: Fuel tank, side panels, fork tubes, exhaust, engine, handlebar, levers, wheel hubs and so on.

The original Bobber with its 100/90 front tyre would of course feel more flickable around Bukit Tinggi, but the Bobber Black was surprisingly almost as good too. The brakes were a little on the softer side in the initial pull but they do get progressively stronger further into the lever’s stroke. I suspected that the brake pads haven’t bedded in fully yet.

The front suspension was predictably awesome as it soaked up road irregularities and didn’t dive like a submarine under hard braking. They didn’t pogo back up when the brakes were released, either. 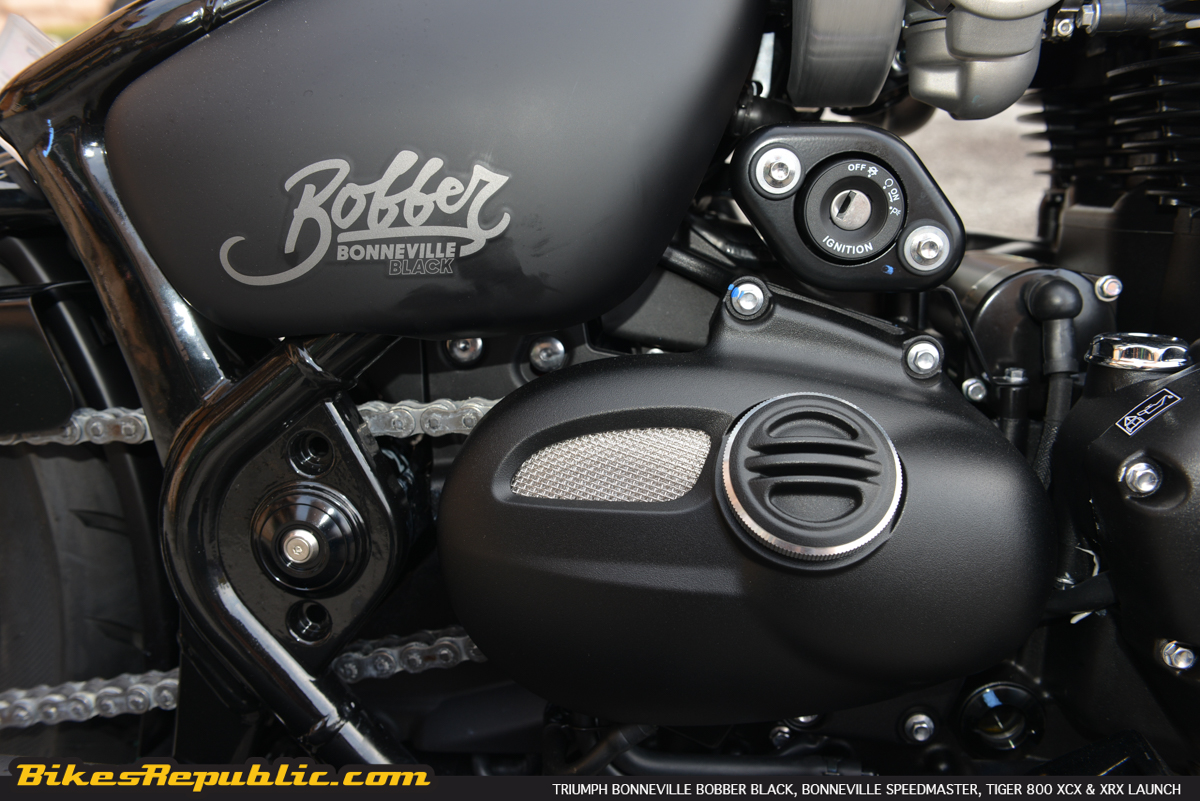 The rear mimics a hardtail, but that’s the key word: mimic; for it felt natural. It worked well over all road surfaces, except deep depressions and potholes, but it’d probably be worse for other bikes (except the Tiger, of course). By the way, the name “Bobber” eludes to the chopped styling, not the bike “bobbing” up and down – which the Bobber Black and Bobber never did. 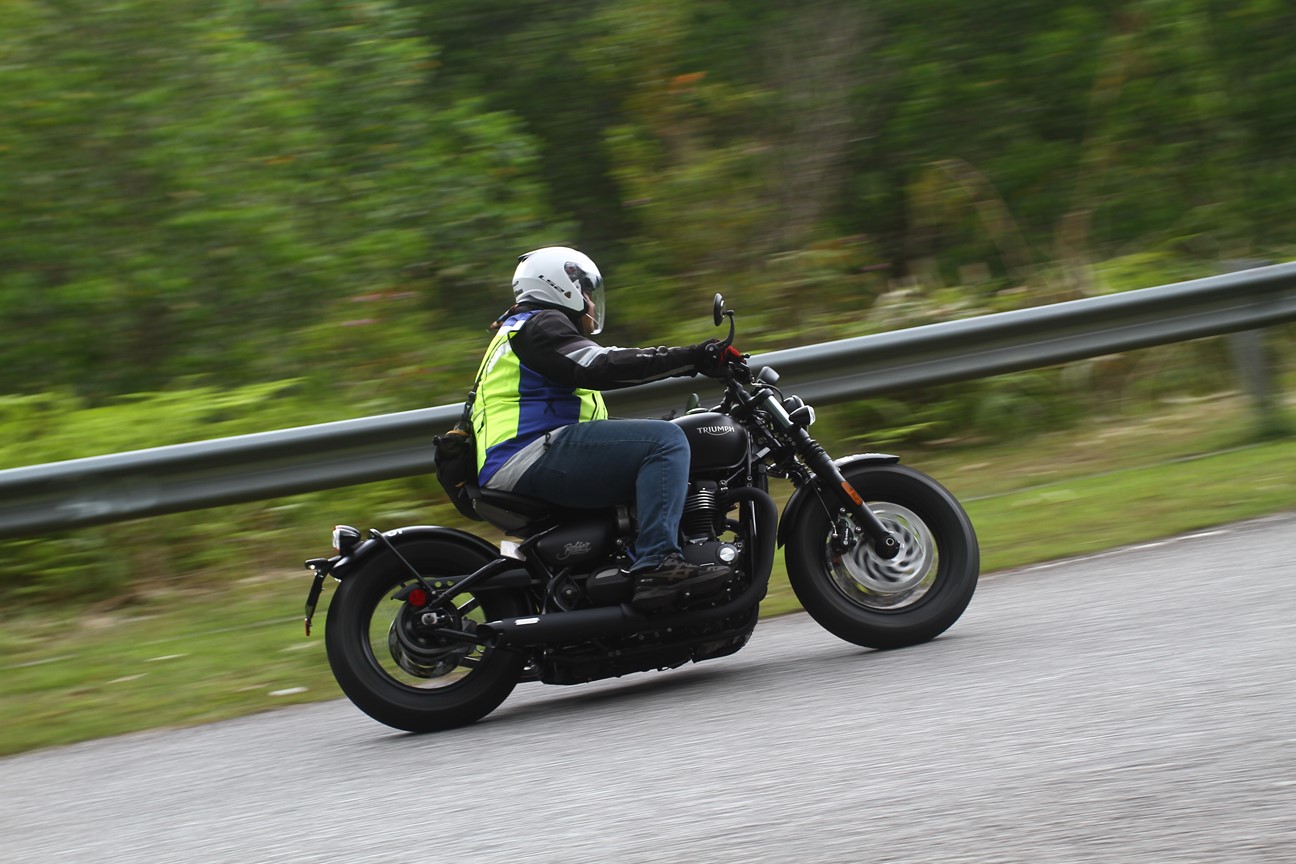 Triumph left the 1200cc, liquid-cooled, 270o crank, HT (High Torque) engine alone. It performed brilliantly, punching the bike out of corners, while Triumph’s trademark linear throttle response gave you the confidence to crack open the throttle sooner. All the while being serenaded by a deep, throbbing exhaust note. 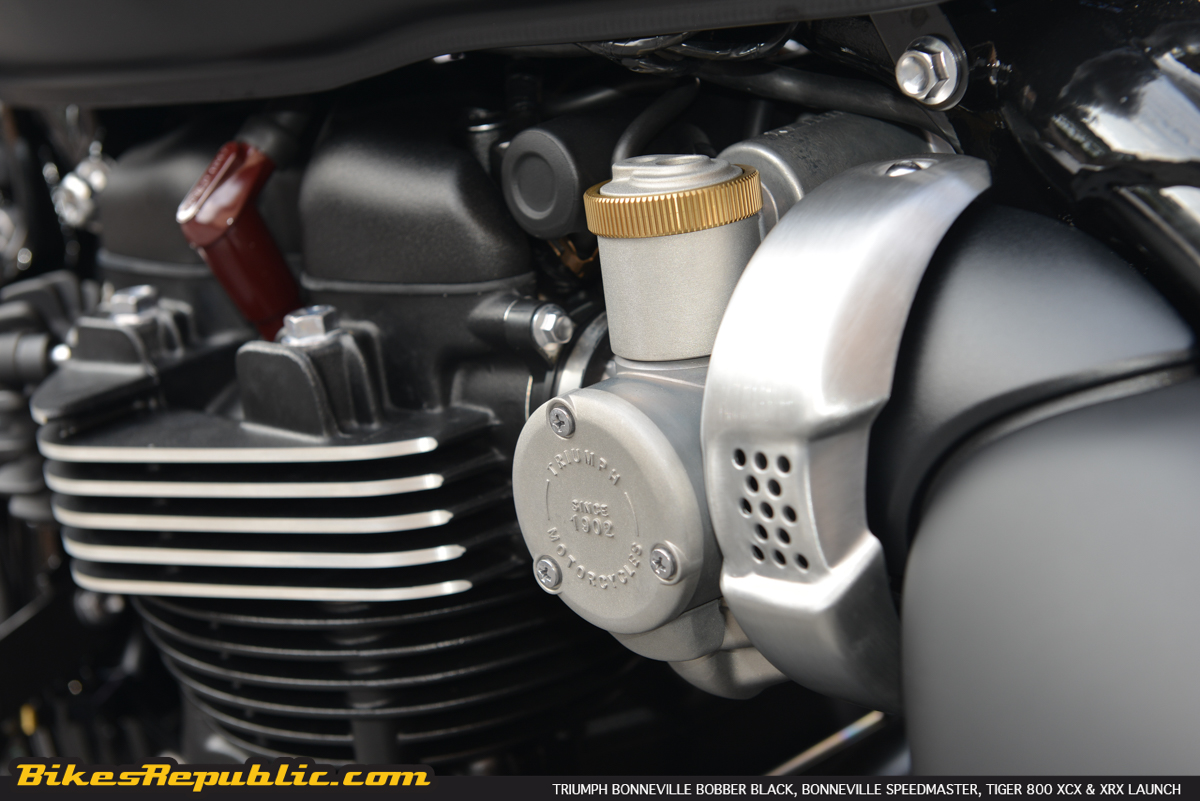 Want a factory custom which exudes all the style and character, plus good handling? Look no further than the Bonneville Bobber Black. Oh, I almost forgot: There are more than 300 items in Triumph’s accessories catalogue to fully bling out your Bonneville, so get bobbing today. 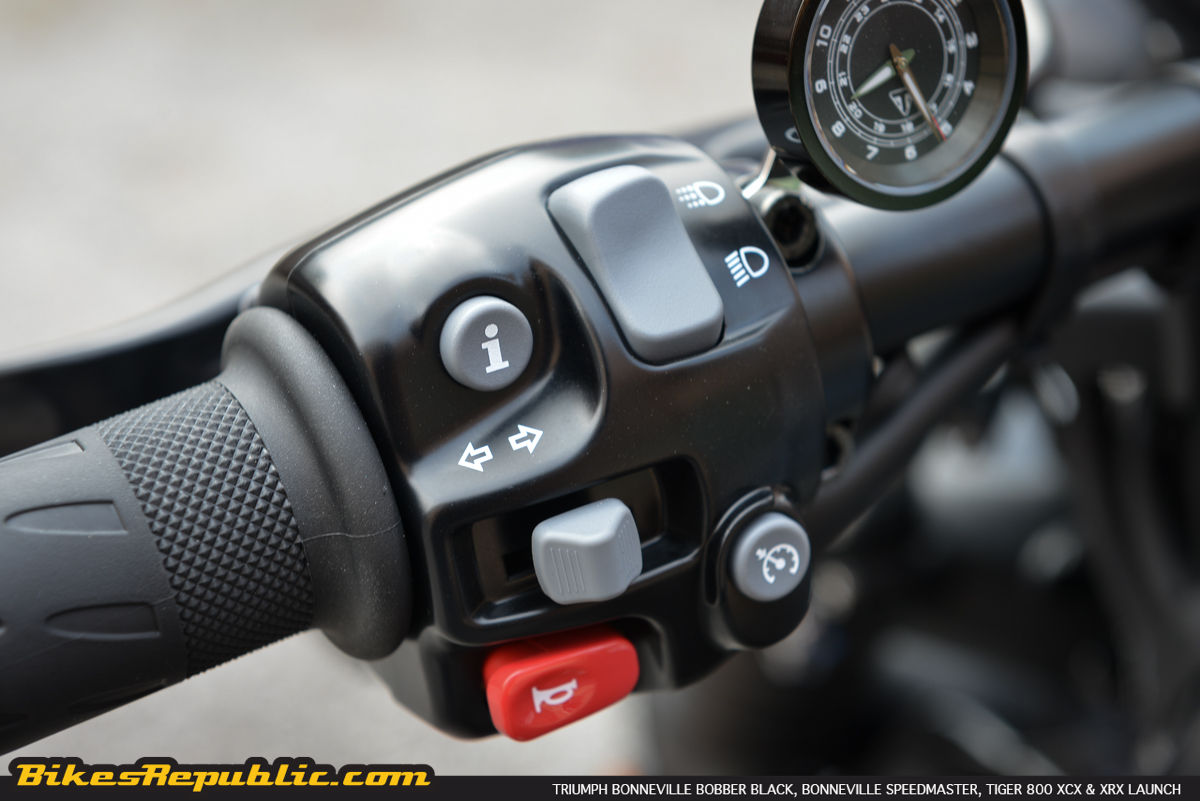 We loved the previous Tiger 800.

We had ridden the previous Tiger 800 XR and XC versions on many occasions and it was our favourite 800cc adventure-tourer, by far. It was well-rounded in its performance, filling a wide range of riding styles and needs. It was so good that we wondered how Triumph could actually improve on it for the new model. 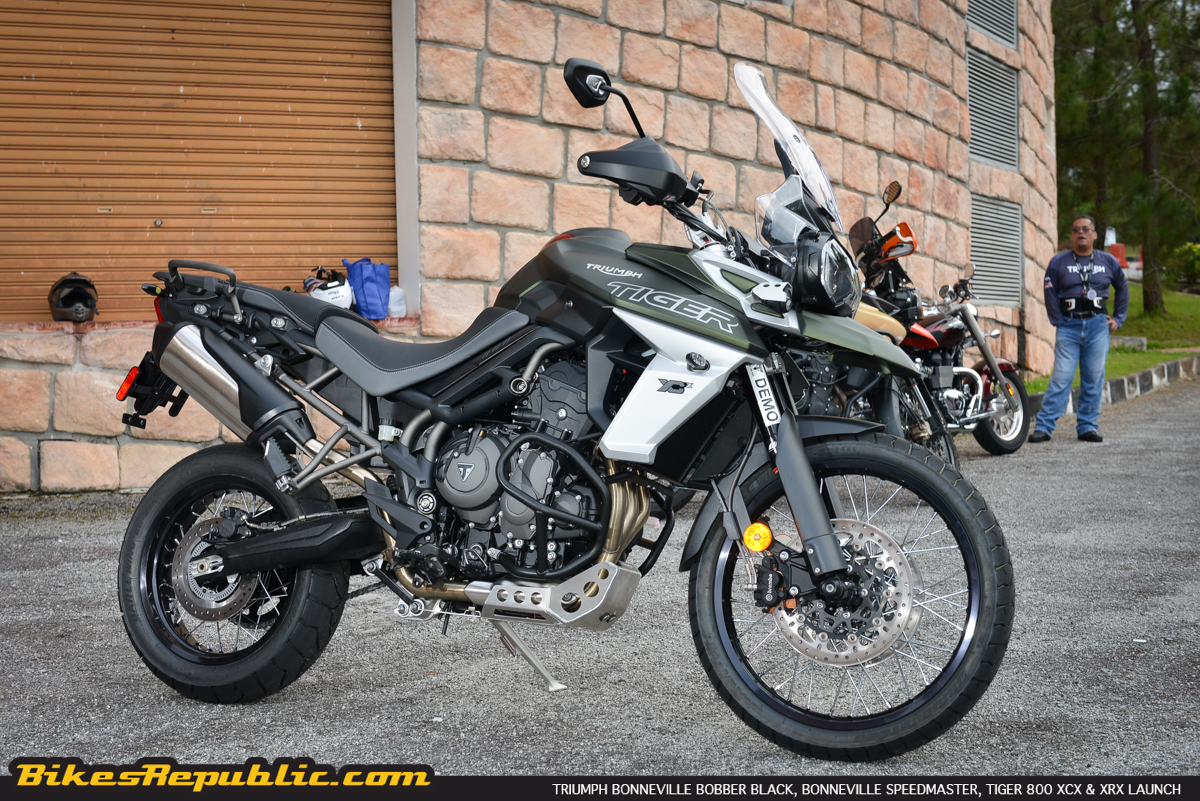 Well, it wasn’t just a facelift, that’s for sure. Not Triumph. Uh-uh. The Hinckley, UK-based manufacturer poured in more than 200 revisions just to the chassis and engine. That’s not including changes, upgrades and revisions to the componentry, bodywork, ergonomics. 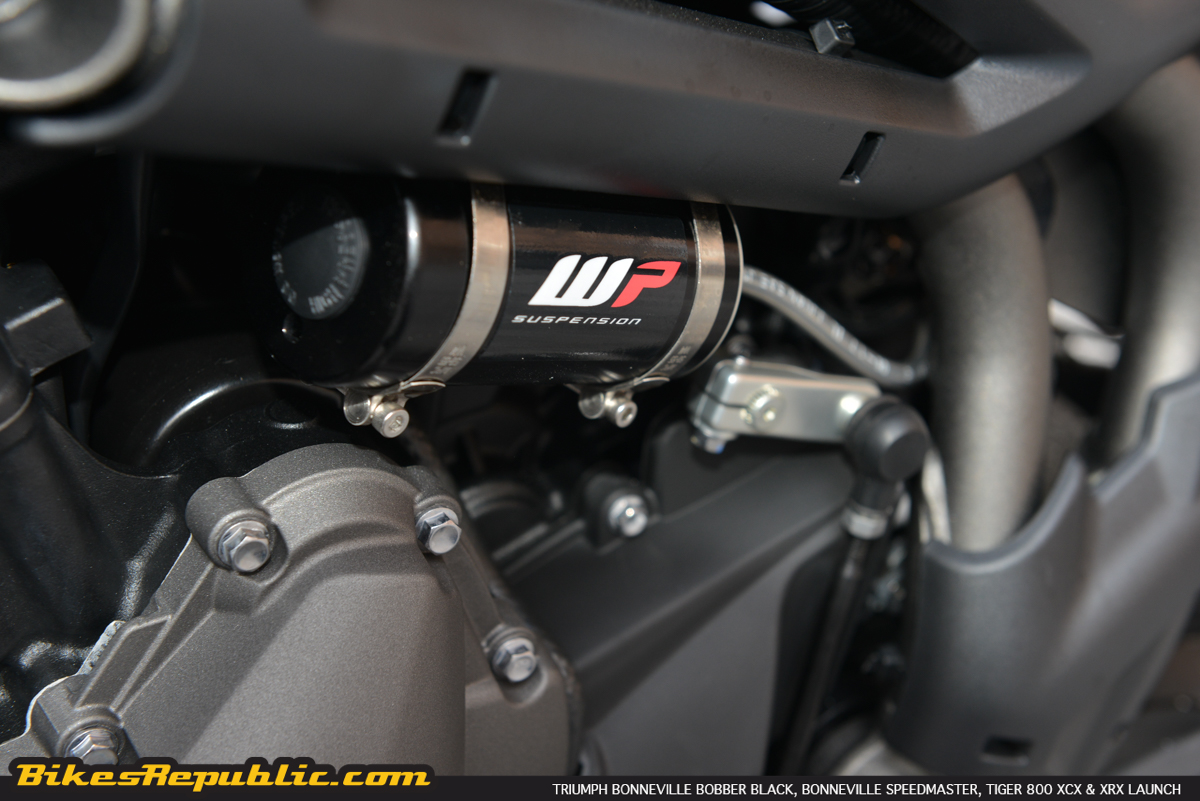 Starting from the front, the Tiger 800 now has a new windscreen which is adjustable for five positions. That’s not all, as the screen is now mounted on four points, instead of two to eliminate buffeting at the top. It is now a one-handed operation. Additionally, wind deflectors below the screen channel wind away from the rider. 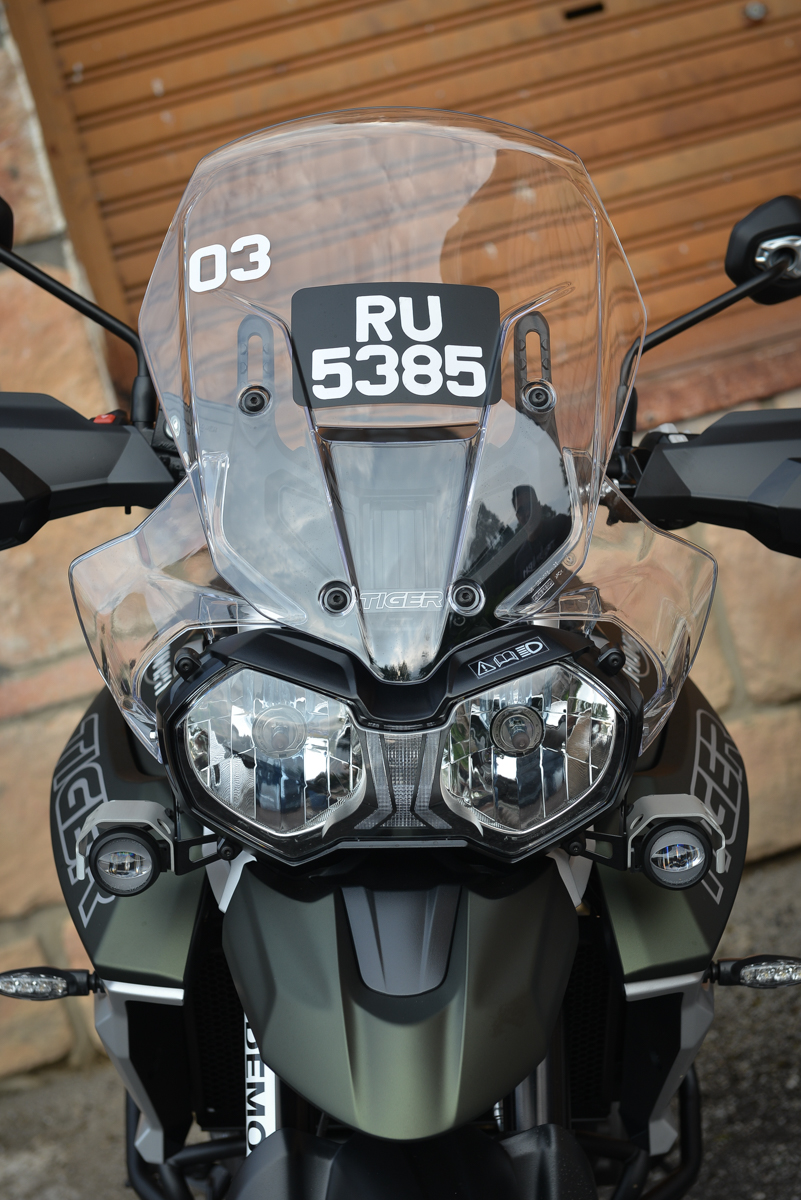 As for rider ergonomics, the handlebar is now 10mm closer to the rider. Standing on the footpegs to simulate off-road riding, all we saw was the instrument cluster. This is a good aspect of an off-roader, meaning that the rider could put more weight onto the front tyre.

The seat had felt much more comfortable than before, since seat compound is new, with a “3D mesh technology.” The rider’s seat is also adjustable for two heights.

Triumph Motorcycles Malaysia had prepared both XRX and XCX versions for the media on this occasion. As such, both bikes had the new 5-inch, fully-colour TFT instrument panel, a la Street Triple RS. The panel displayed every bit of information a rider would need, including a fuel range metre that ran down to zero, instead of annoying us with the number of kilometres travelled from whence the low-fuel warning began (found on other bikes). The TFT display also has an Auto Contrast feature which adjusted its brightness according to ambient lighting. 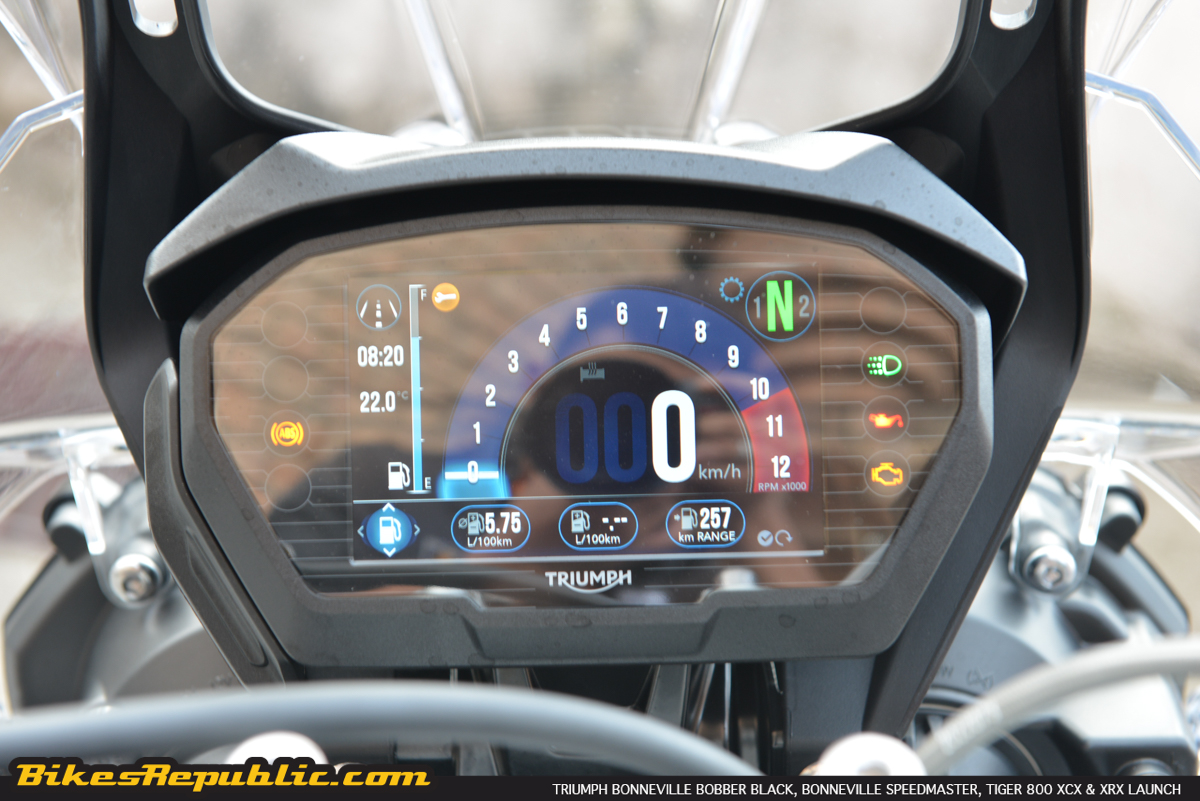 Since the TFT display was similar to that of the Street Triple RS, Triumph had also transplanted the hand controls to the Tiger 800, putting everything within easy reach of the  rider’s thumb. Switching riding modes or toggling through the data is through a 5-way joystick. The rider no longer had to reach forward into the instrument cluster to change settings.

The cruise control has similarly been revised, now without an ON/OFF master switch. 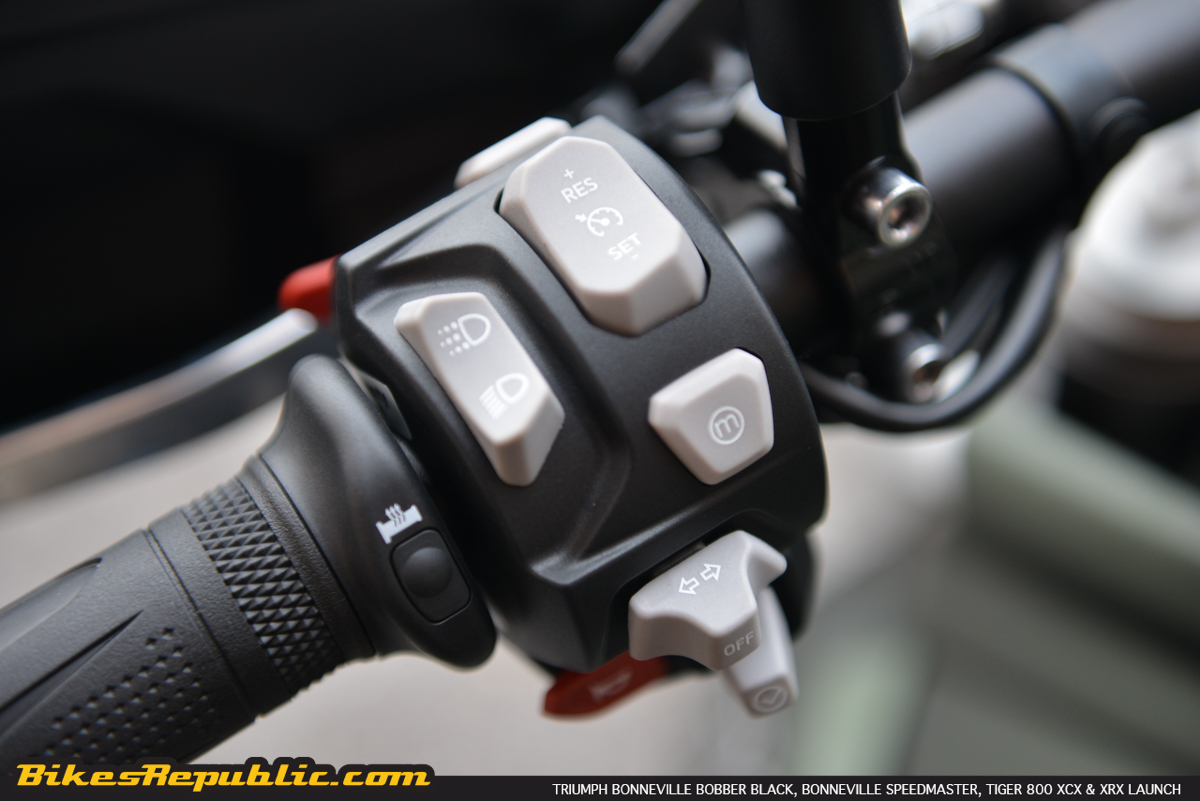 Moving downwards the front brakes are Brembo items. They were progressively strong but not grabby. Grabby brakes are the last thing you want if you’re riding off-road. 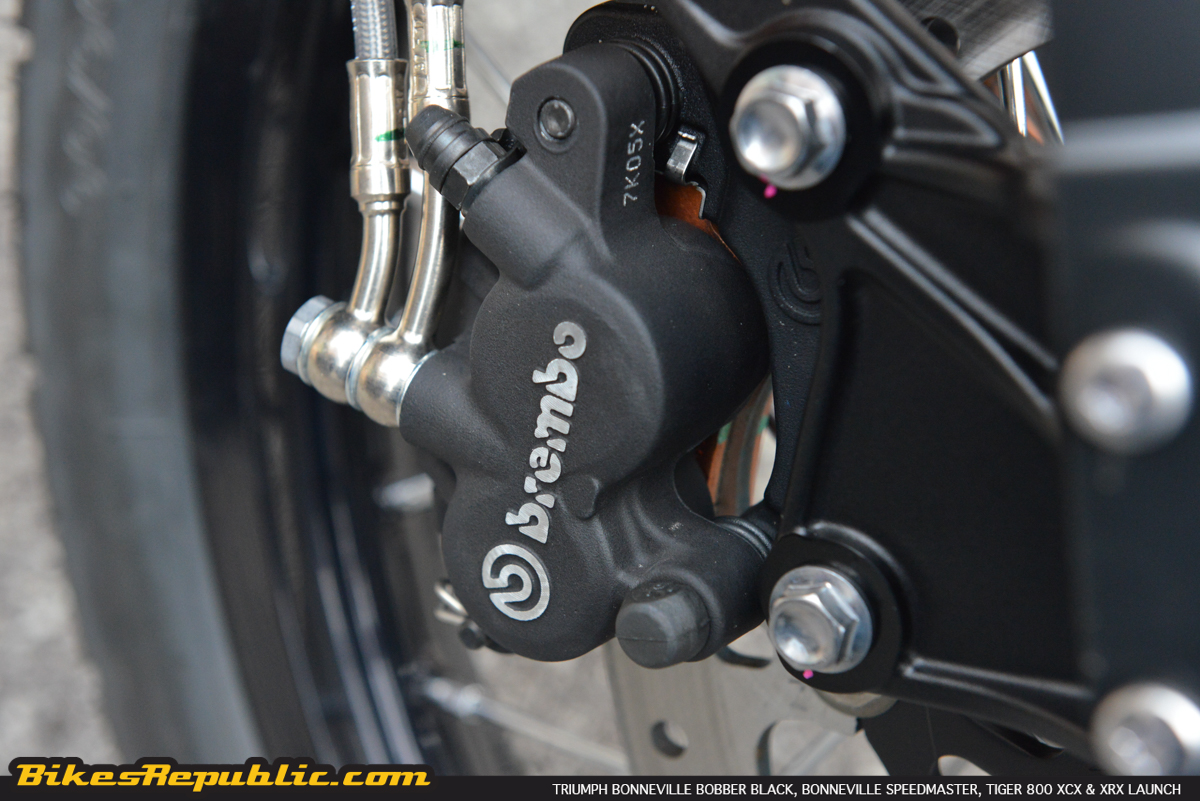 The 800cc, inline-Triple engine has been revised with a more mass centralized cooling system, lower 1st gear ratio, lighter and freer flowing exhaust, lighter alternator, and the removal of the backlash gear in the transmission.

Where the Tiger 800 differs are the intended usage, which consist two versions: The road-oriented XR and the adventure-oriented XC (Cross Country). Each version is then split into further sub-variants depending on the level of accessories and equipment. 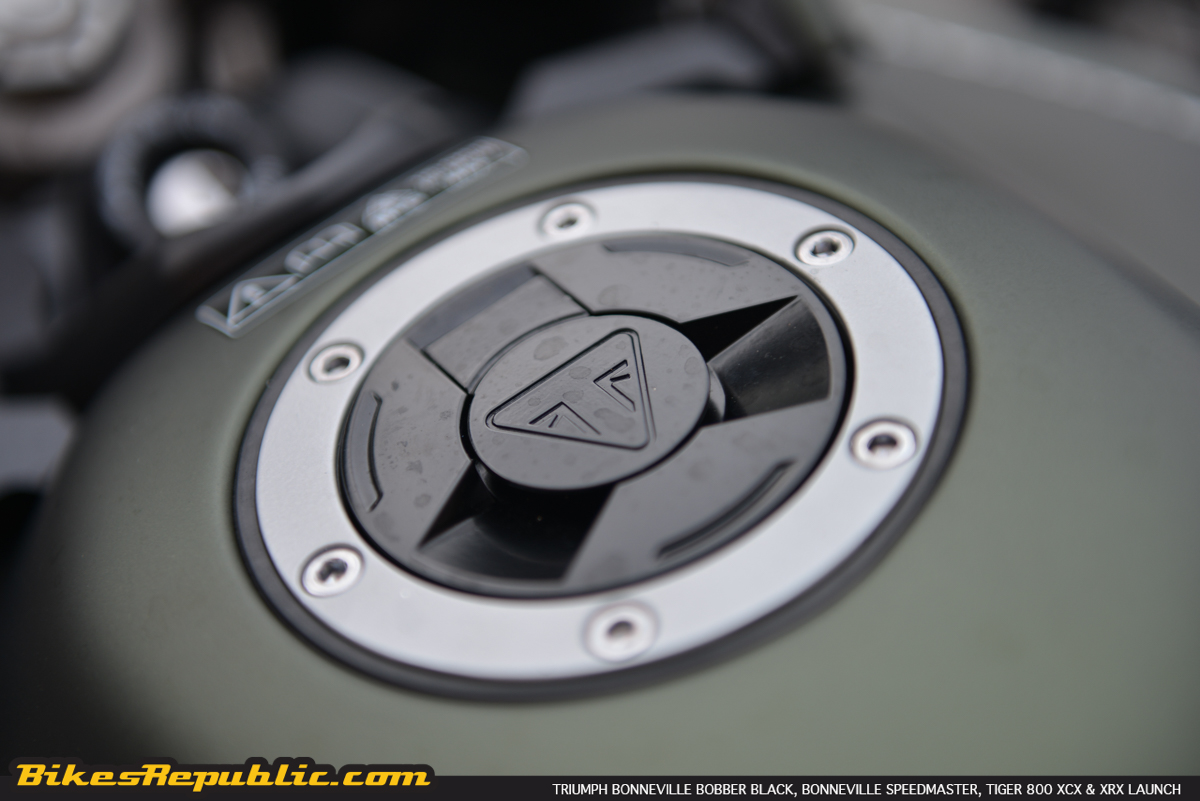 The XR lineup consists of four models: The base XR, the mid-tier XRX, the XRX LRH (Low Ride Height), and flagship XRT. The XR range uses cast 19-inch front wheel and 17-inch rear, instead of the spoked 21-inch front and 17-inch of the XC range.

The base XR gets all the new changes except for the Brembo brakes, TFT display, cruise control and riding modes, although it does have ABS and traction control. 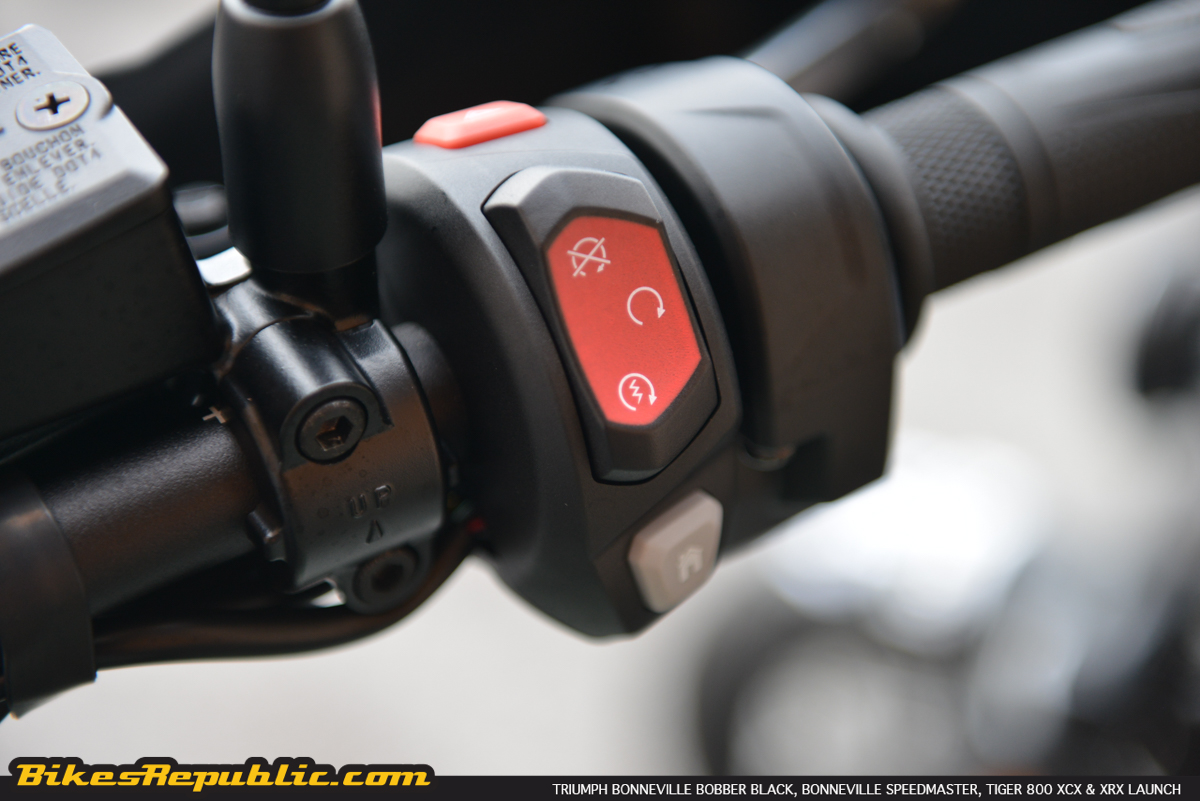 On the XC side, the base XC model had been eliminated and so had the XCX LRH. The lineup now starts with the XCX as the base model, instead. 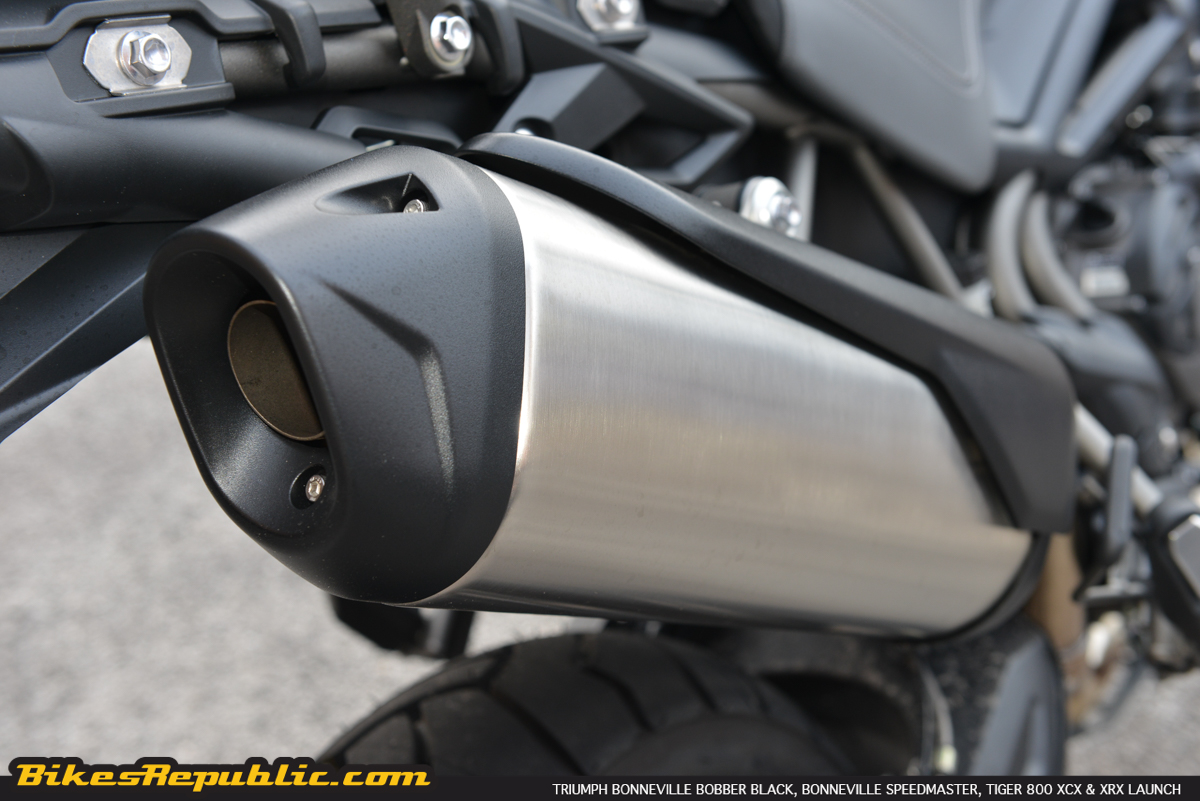 Triumph Motorcycle Malaysia revealed that the manufacturer is looking to expand their influence in the off-roading world, hence the Tiger XCX and XCA have been given a few important updates.

Apart from the main features of the XRX, the XCX features 5 riding modes, including the new “Off-Road Pro” mode. In this mode, traction control is switched off as is the rear wheel’s ABS. The front wheel’s ABS remains active. This feature allows the rider to lock the rear wheel while still allowing for maximum braking pressure in the front tyre to retain the ability to steer the bike. It’s most useful to lock and drag the rear wheel while heading down a steep off-road slope, besides sliding the rear wheel around a turn in the dirt. 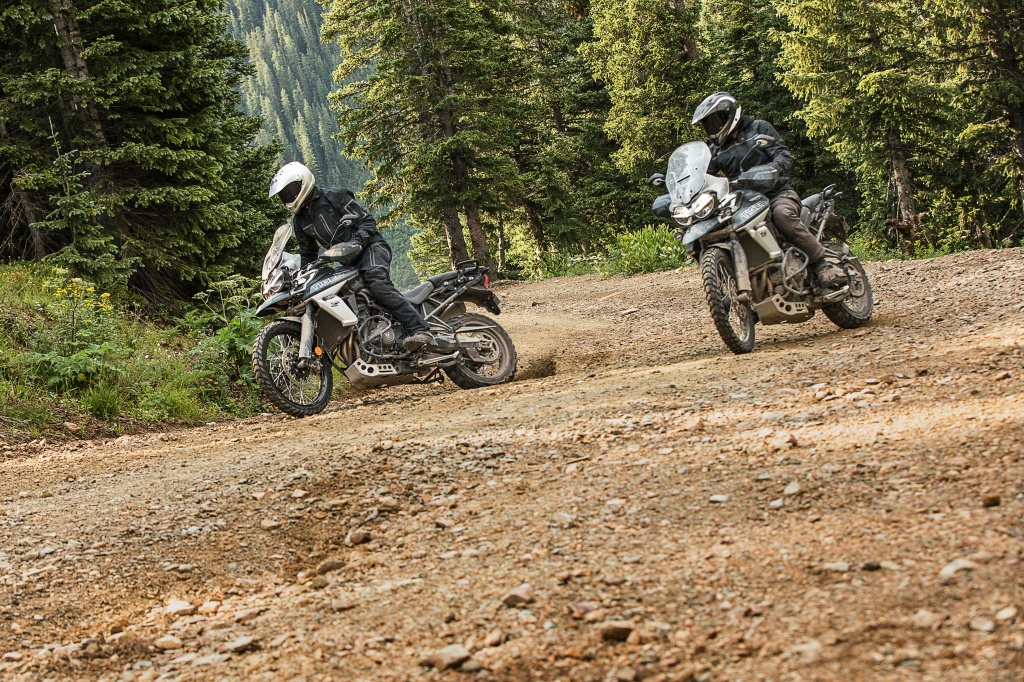 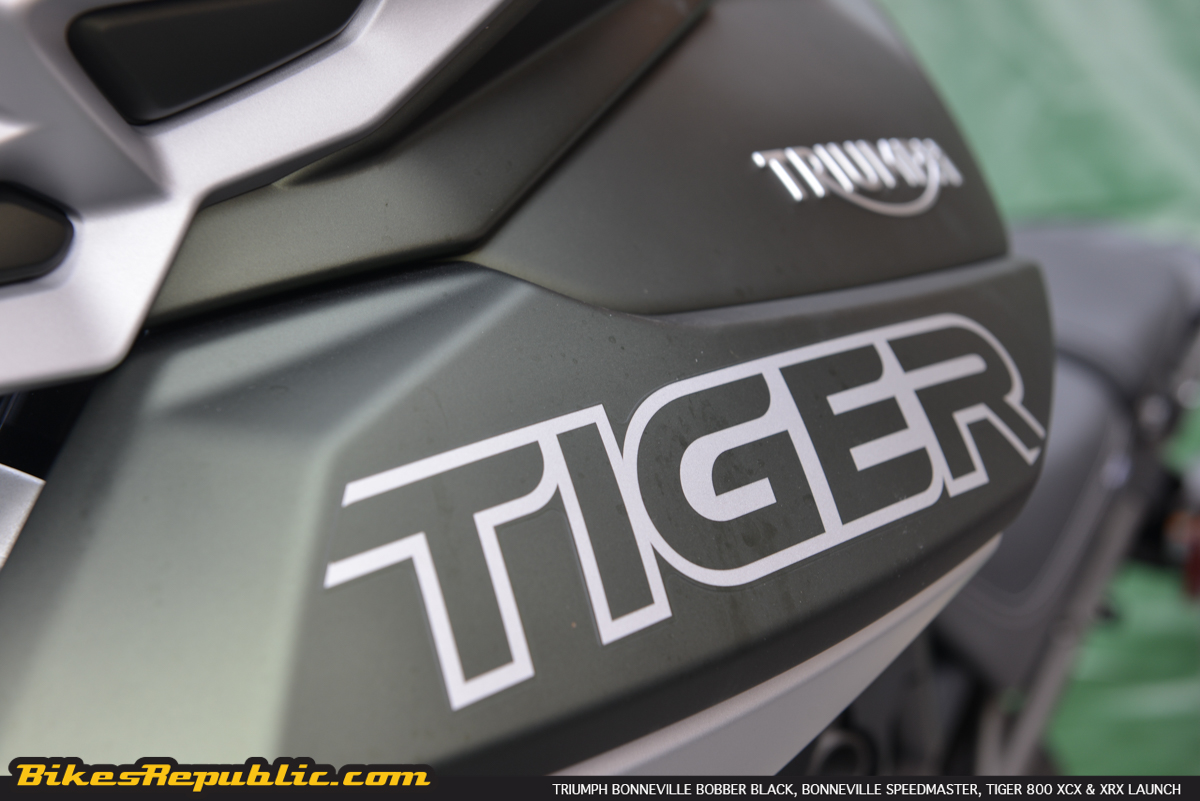 As for the XCA, it shares the XCX’s features with a few additions. There are 6 riding modes, including one which is programmable by the rider; all-LED lighting; a total of 6 screen styles in two themes; and heated grips and seats.

So, what do these massive number of changes yield in the new Tiger 800?

The new engine sounded different from the outset. Whereas the previous bike’s exhuast sounded a little muted, the new bike’s was boomier. The engine is now quieter too.

The seating position felt similar, but the arms don’t feel so stretched forward. The previous Tiger 800 had been supremely flickable and that trait has been brought forward to the new model. However, the newer bike felt more stable, planted and suspension action was “tighter” when quick-flicked into a corner. Changing lines in the middle of corners were done even without being a concern to the rider. Think it and the bike does it. 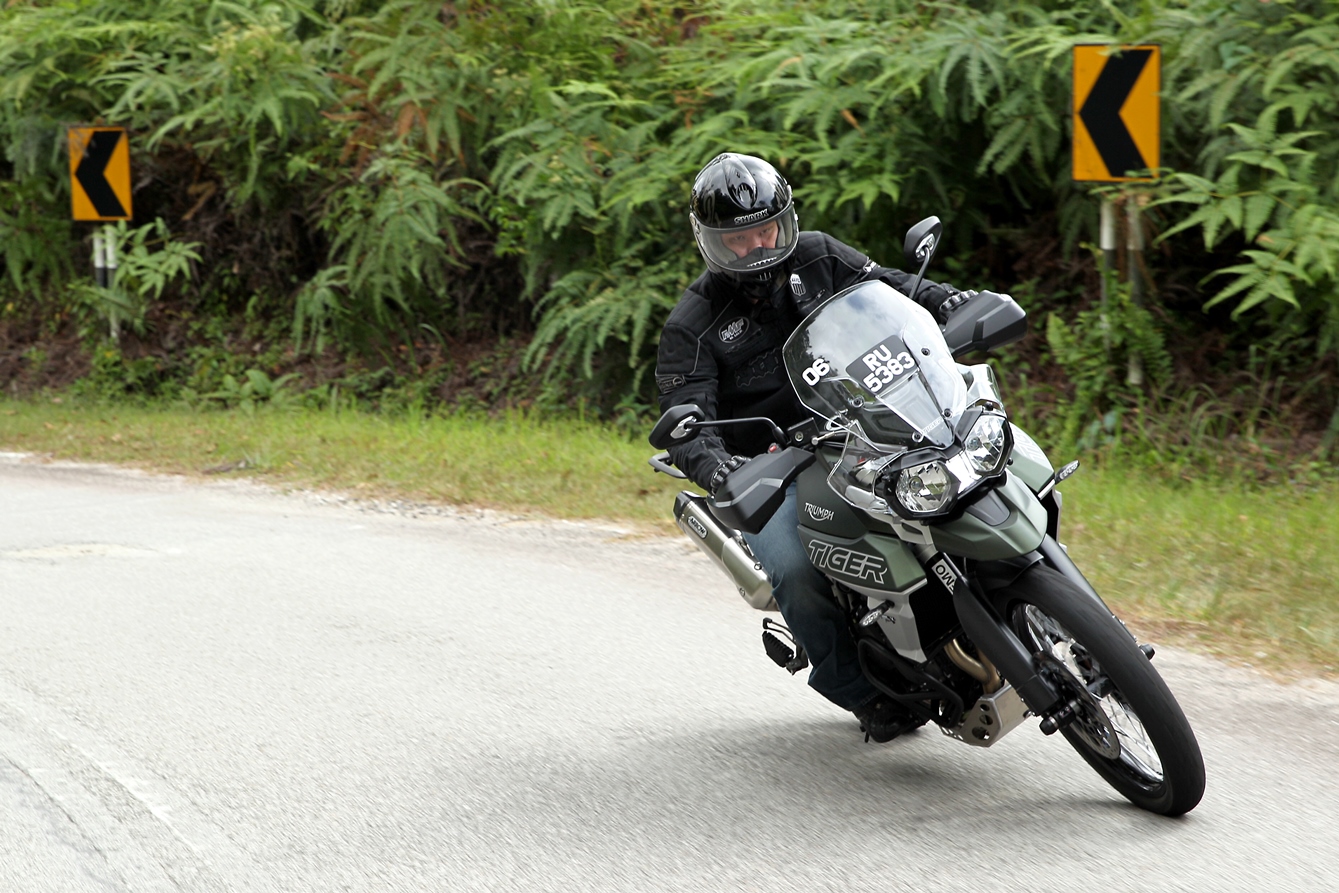 Most tall bikes with long travel suspension don’t enjoy being trail-braked into corners, especially those with “manual” suspension. But not the new Tiger 800. You could be as aggressive as you want but the bike never seemed fazed. 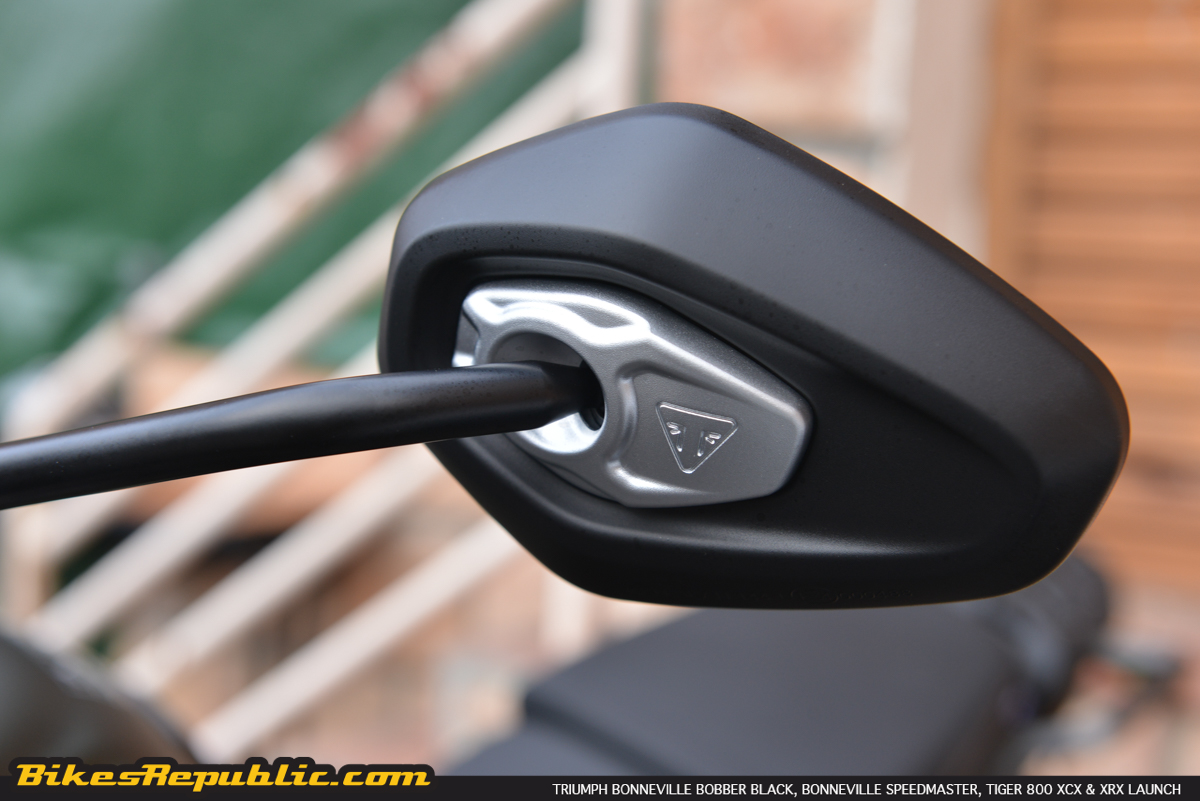 Fueling was superbly linear and the engine revs up. But it was the availability of torque everywhere in the rev range that was truly additive. So much torque in fact that I just left it in 4th and 5th gear while riding around Bukit Tinggi. 3000 RPM in 5th gear equaled 60 km/h, but the bike could pull cleanly off from below 2000 RPM without juddering. 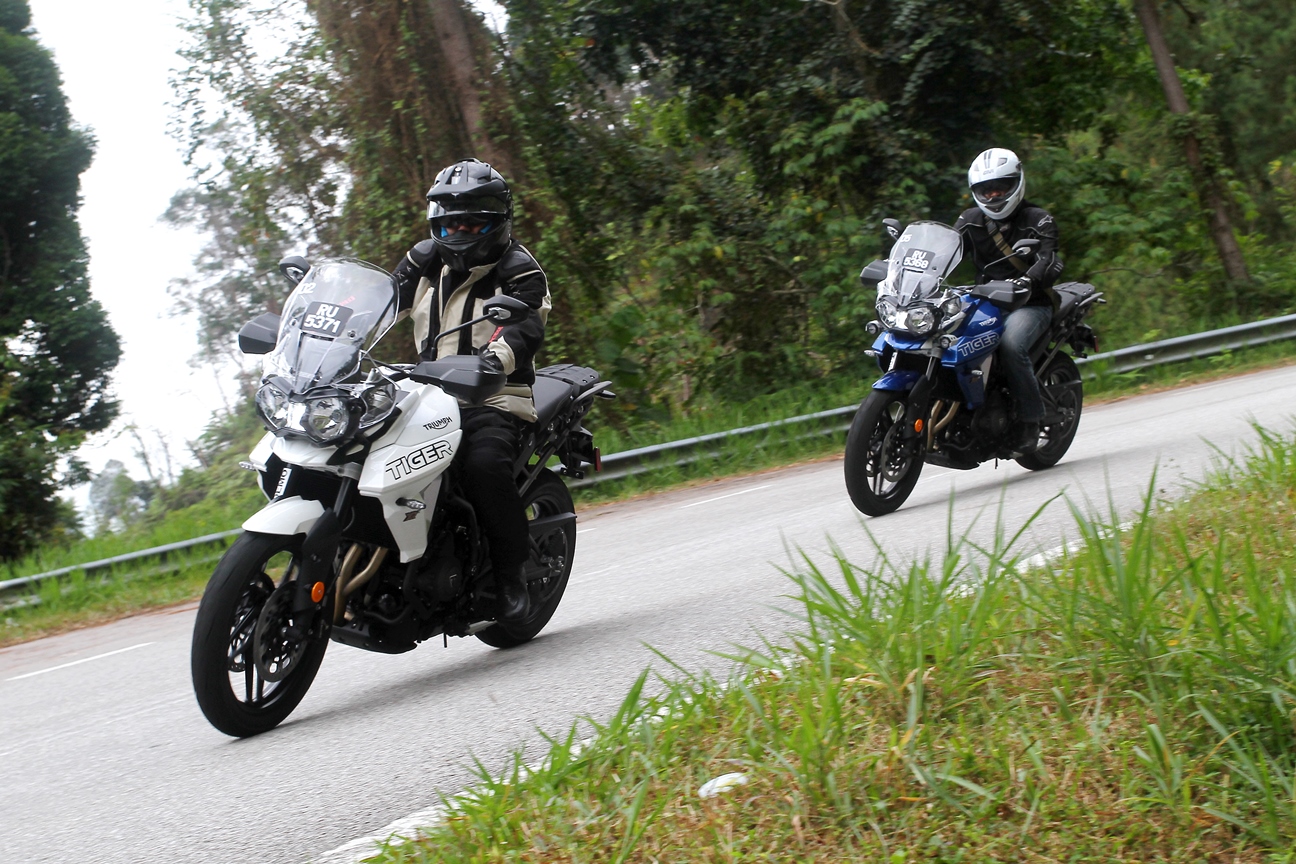 The third-generation Tiger 800’s engine was really smooth for a three-cylinder, but it’s even smoother on the new bike. Besides that, it felt like the bike had a slipper clutch although it didn’t, due to the removal of the backlash gears. Consequently, corner entries and midcorner attitude was super smooth. 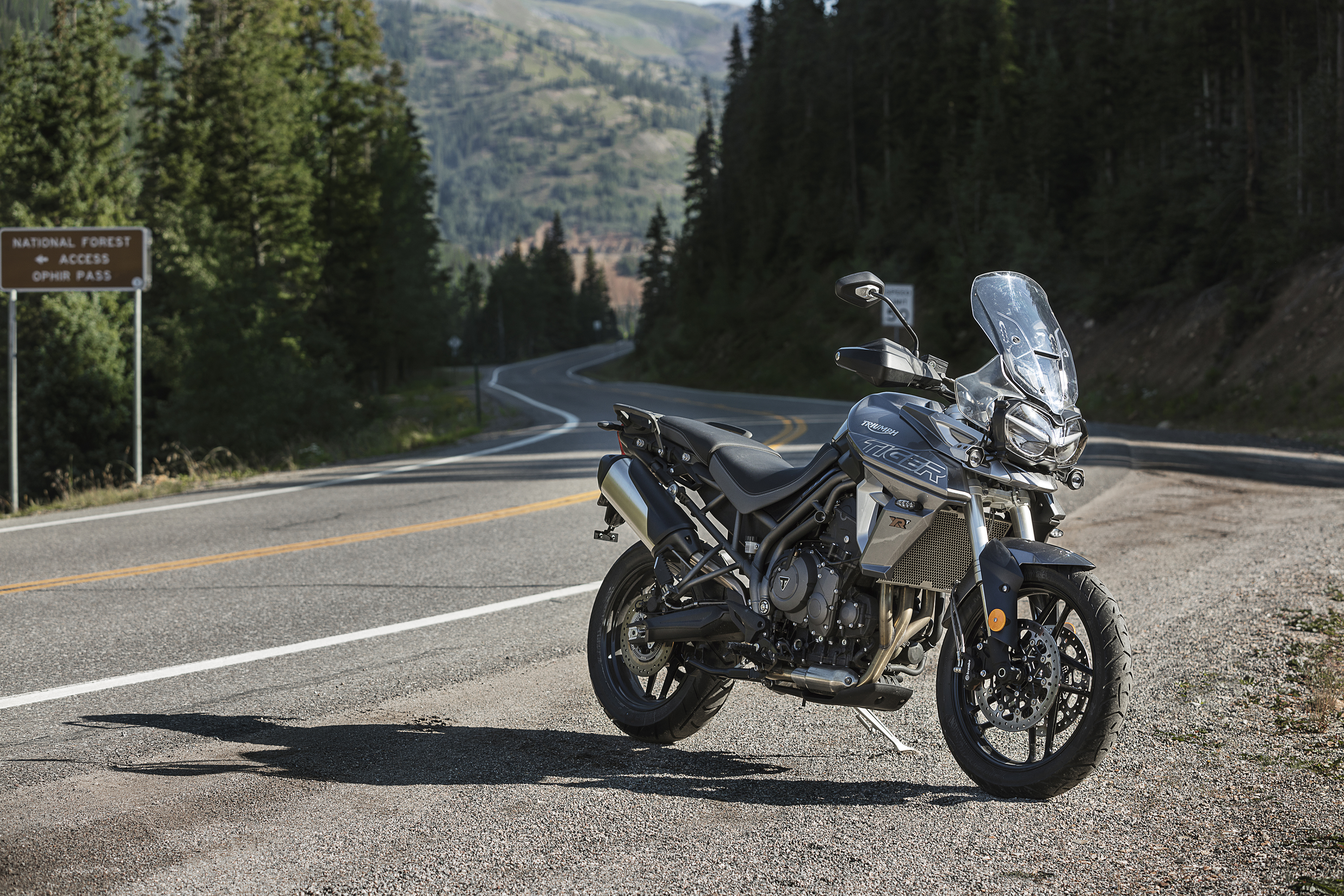 Those confidence-inspiring traits were what endeared us to the third-generation Tiger 800, but the new bikes are absolutely even better now. It wasn’t only us who found the new Tiger 800 amazing, for every motojournalist gushed over them.

The new Tiger 800 is set to take the world by storm.

As a footnote, Triumph Motorcycles Malaysia is currently running an introductory promotion for the new Tiger 800 XR. It’s priced at a mouthwatering RM56,900 (basic selling price incl. of 6% GST) so hurry over now for a test ride.