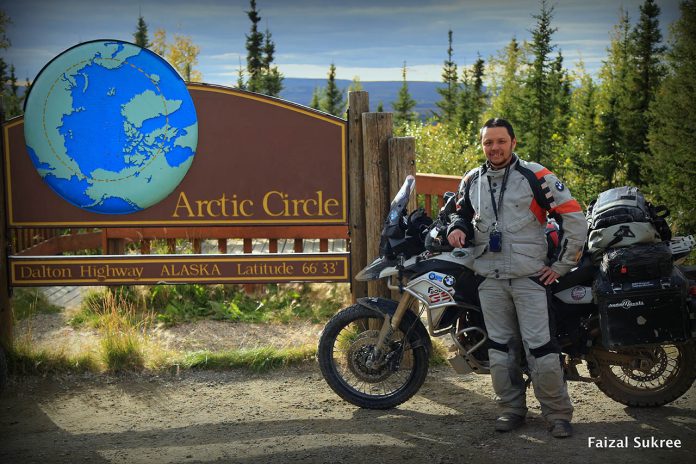 Most of us can only dream about leaving the daily grind behind, hopping on a bike and riding off to a far away land. Work and family commitments keep us tied down from being truly free, but some people live the dream every day. 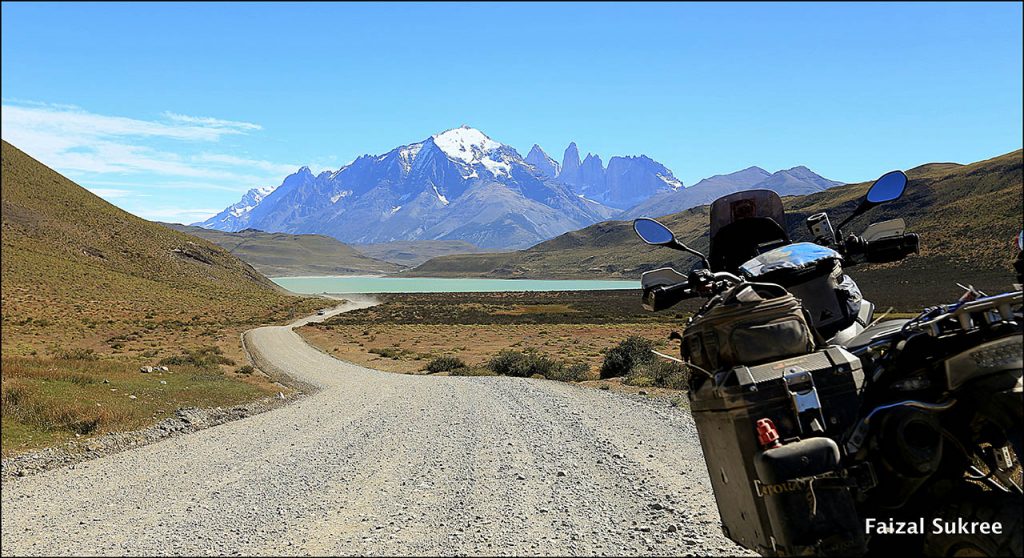 It is this writer’s long time dream to be able to ride from KL to London, just for the heck of it. And then maybe cross the pond for a ride across the United States, and perhaps across the Pacific over to Asia for a ride South to KL. It remains a dream. For now. 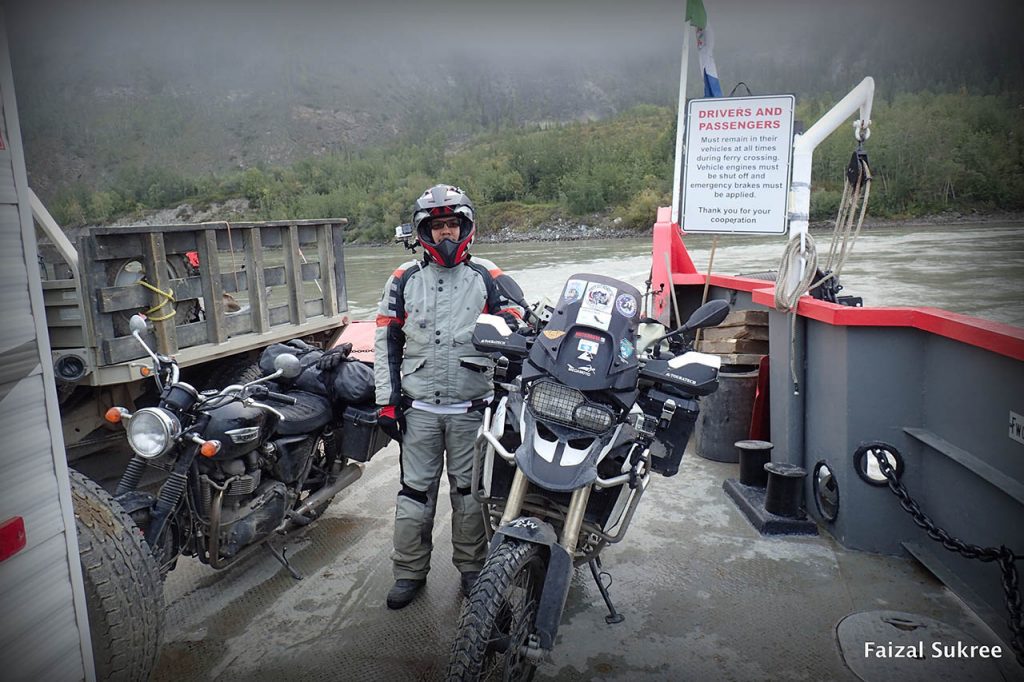 But there is one guy I personally admire, hope to emulate, and learnt a lot from during our 3 hour interview; Faizal Sukree, or better known globally as Malaysia’s ‘Mr GS’. 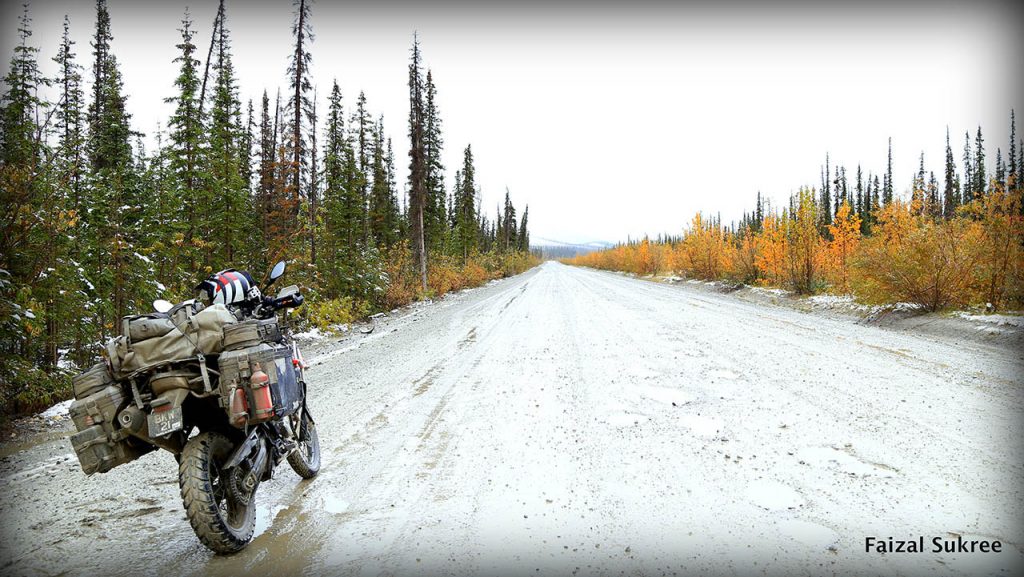 Faizal doesn’t only ride where he wants, when he wants, but sometimes gets paid to do it. Because of his vast experience in riding around the world he is also the perfect biking tour guide. Those that aspire to see the world on two wheels can hire Faizal as a tour guide. He handles everything from the logistics, to planning the routes, meals, permits, to where you are going to sleep for the night, everything. 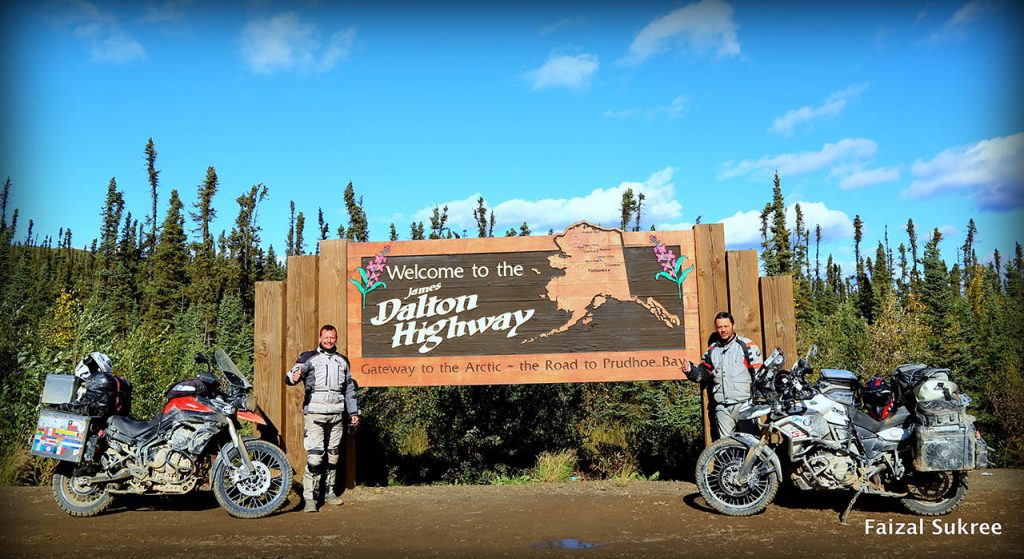 Riding the world needs guts, skill, lots of determination, patience, understanding of cultures, but most importantly, it requires a lot of contacts. 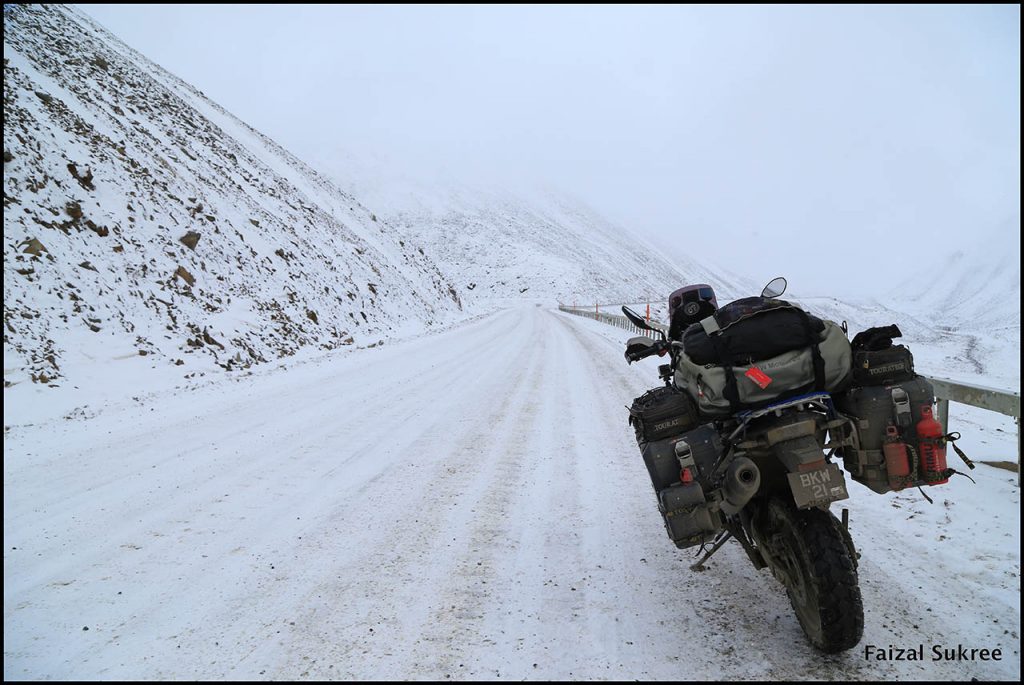 “I have friends all over the world, and they are always willing to help me if i need help. I do the same when they are riding this side of the world, so we look out for each other,” said Faizal when we met up a while ago at La Bodega, Bangsar Shopping Centre. 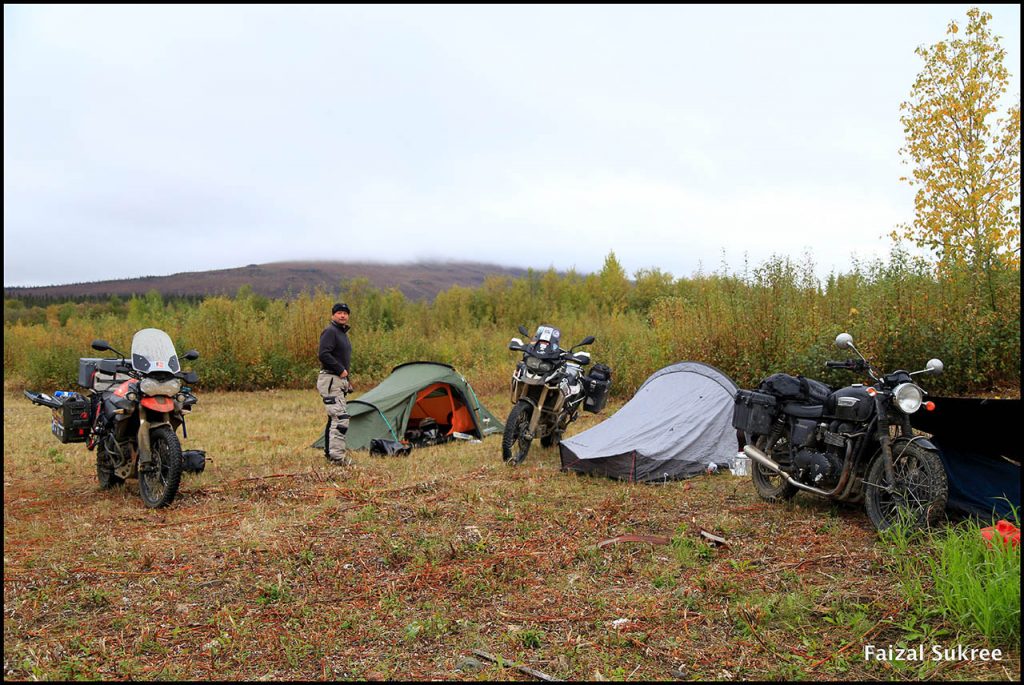 I have been trying to score an interview with Faizal for months, but he was busy traveling so it took some time before our schedules met. 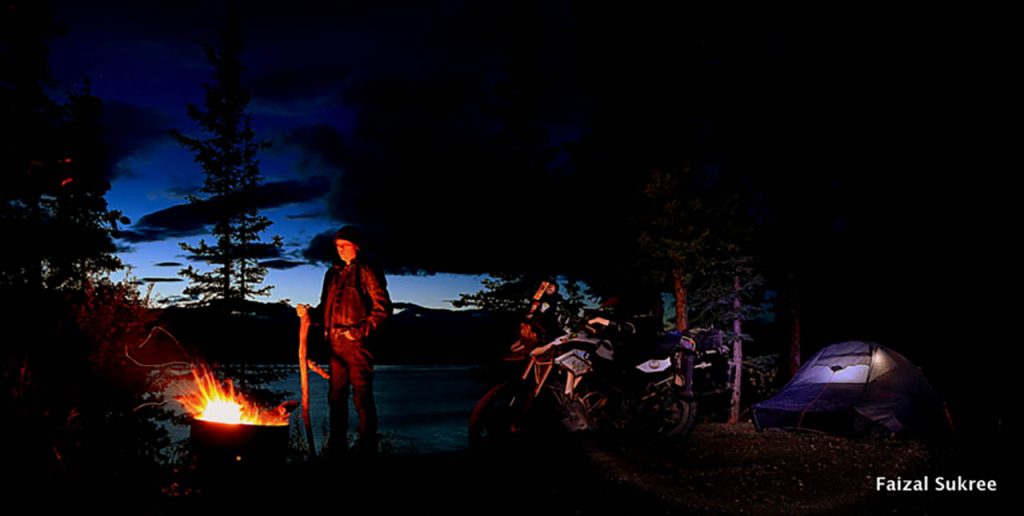 Globe riders (lets call them that) have a special something about them. They seem to have a certain detachment from the materialistic world. The way they dress, the hair, the aura, the way they talk, nothing about worldly luxuries seem to impress them. When Faizal and I spoke about bikes, he did not seem very interested. It was almost like he didn’t want to be there, preferring to be riding in some far away place. It is understandable though, why bother with everyday hustle when you can be riding. 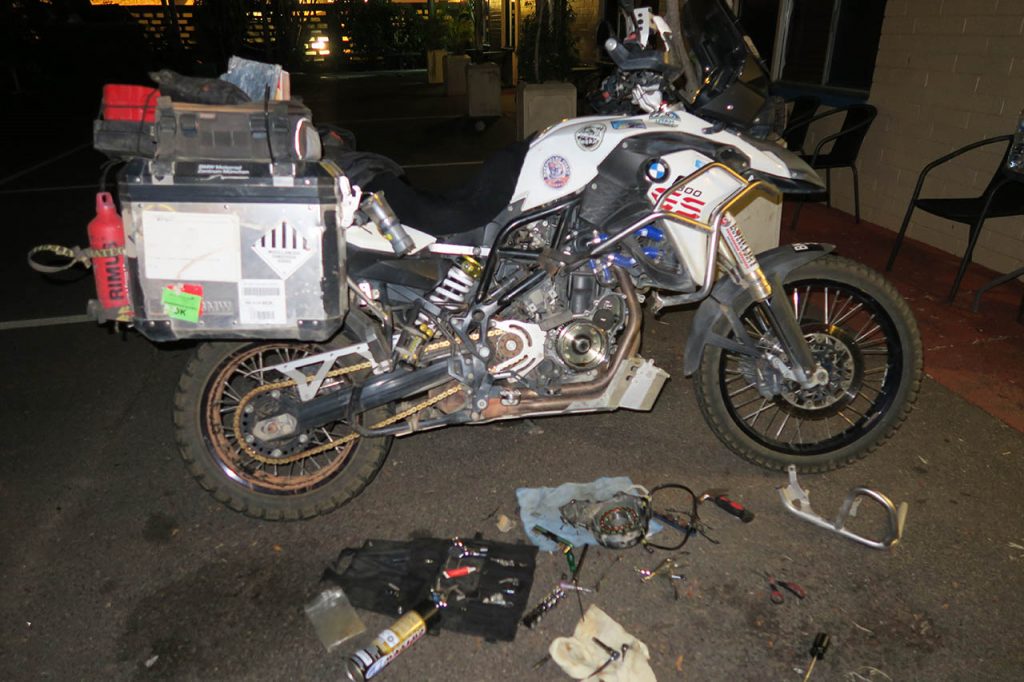 “All I need is my BMW GS 800. I have a few bikes, some rare ones, some track bikes, some are regular every day bikes, but all I want and and the one bike that really impresses me is the BMW GS 800,” he explained. 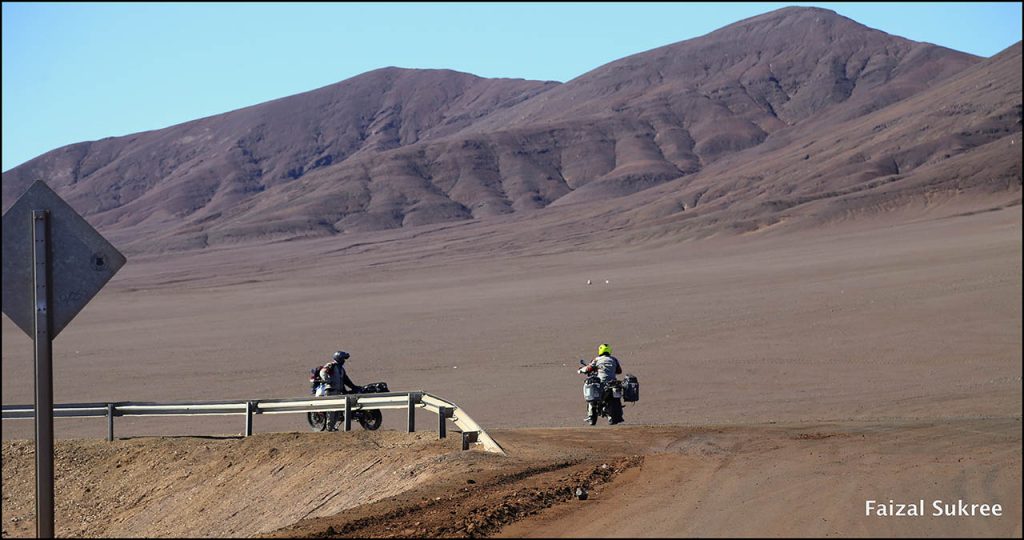 He says the BMW GS 800 stands out from his stable of about a dozen or so motorcycles because of its simplicity and its robustness. 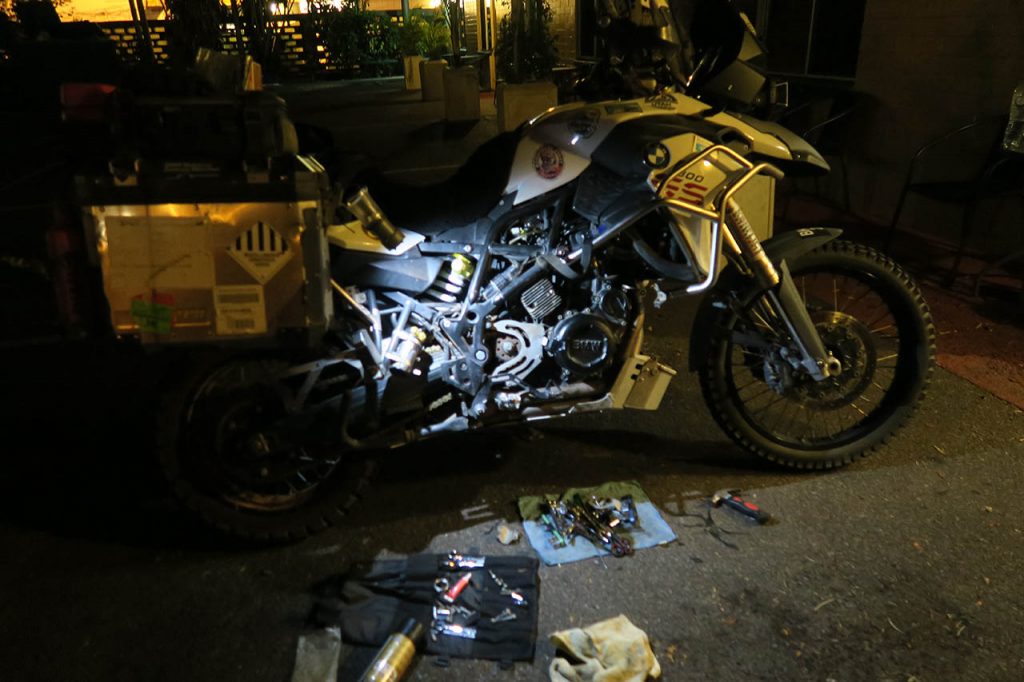 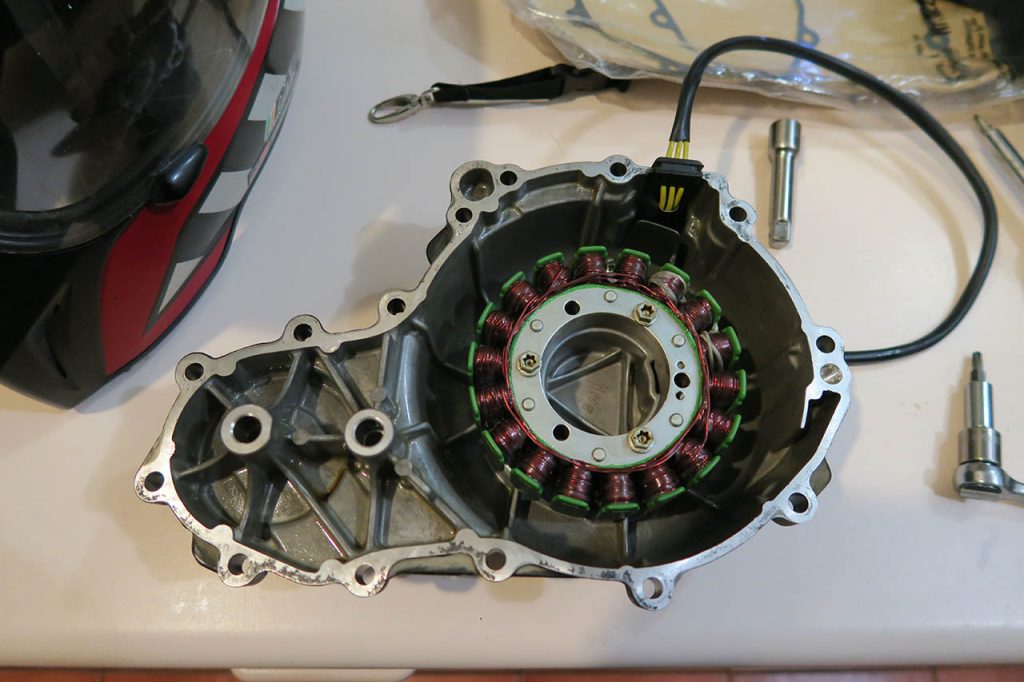 “For example, if you happen to break down in the middle of Mongolia, you will only be able to get spare parts from Beijing,” 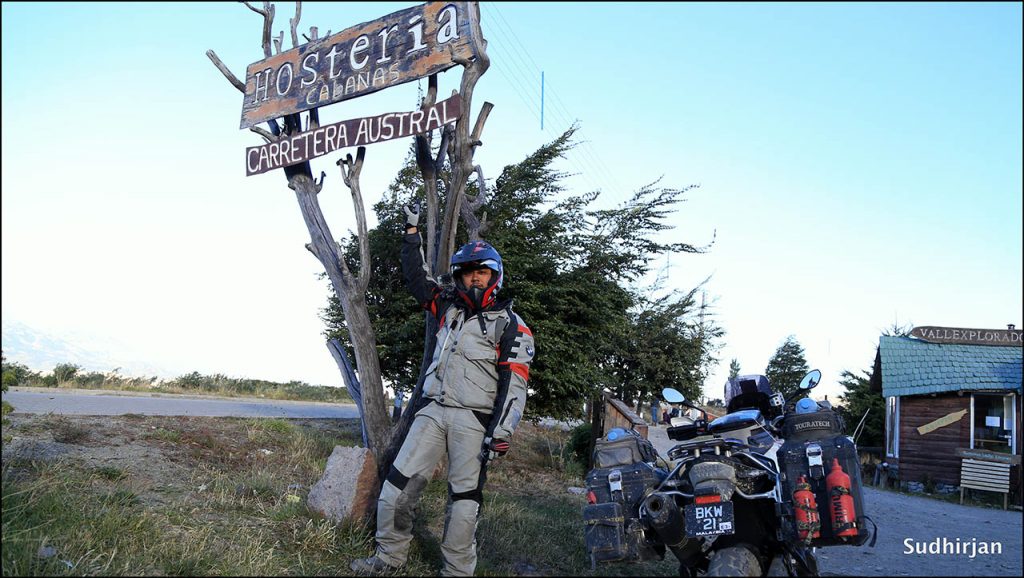 Faizal has been riding since he was 16. He owned a YZ125 which he rode to school and everywhere else. “My aunt bought me that bike as my family never allowed me to have a motorcycle back then,” he fondly remembers.

However, the 40-year old father of 2 did not begin his tour riding career until 2007, when he and his neighbour bought a BMW GS 1200. That is when he says he “kena racun” (got bit) by the travel bug. They rode to Indo-China, Mae Hong Soon, Laos, around the Golden Triangle. They travelled so much that in just 2 years he was spending more time on the road than at home, and then he traded up to a GSA. But that did not turn out too good as it was too big and too heavy to be riding everywhere, and that is when he met the F800. 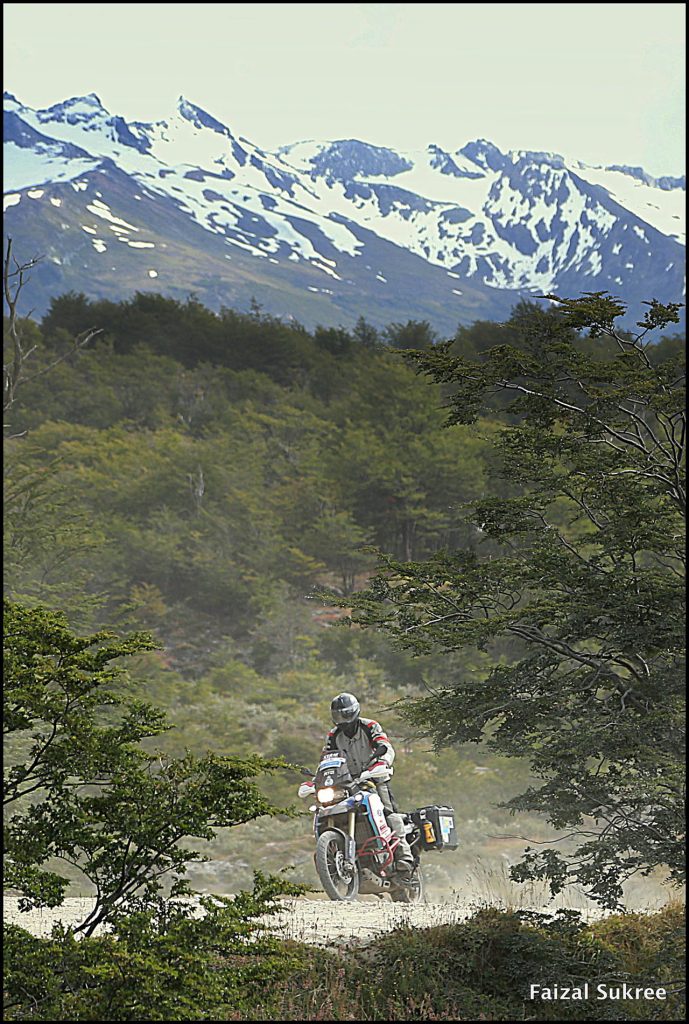 So what inspires a person to just up and go ride around the world? Surely there must be a trigger point; Faizal’s trigger was a movie – the Motorcycle Diaries to be exact. “There was no one who truly inspired me to go riding, but when I watched that movie, it somehow motivated me to just go out and ride,” said Faizal, when asked about his inspiration.

The Motorcycle Diaries is a fascinating movie of a young Che Guevara (yes that Che, the freedom fighter who was best friends with Fidel Castro) who embarked on a motorcycle ride throughout South America with a friend. It was during the ride that he was exposed to the disparities and exploitation of the South American people by wealthy industrialists. It is hailed as a must watch movie for motorcycle fans. Check out the movie trailer above. 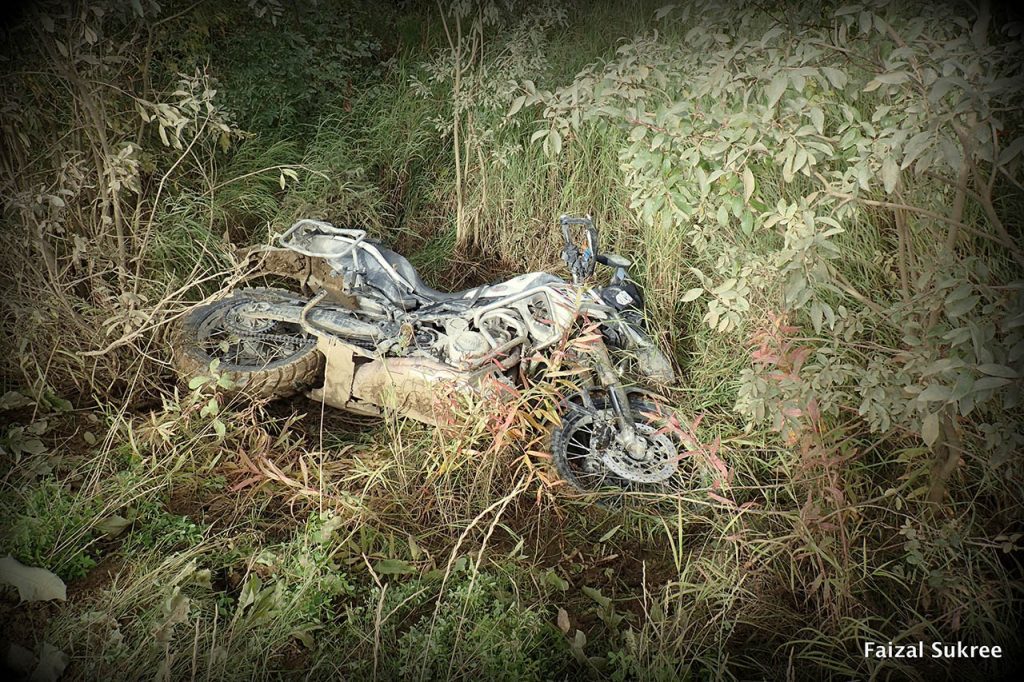 A man who is constantly on the road surely has a number of horror stories to share, but not Faizal. Sure there are the usual difficulties of crossing borders, language barriers, egoistic authorities, and the lot, but one of the most scariest moment for the young adventurer happened close to the Arctic, in Alaska to be precise. 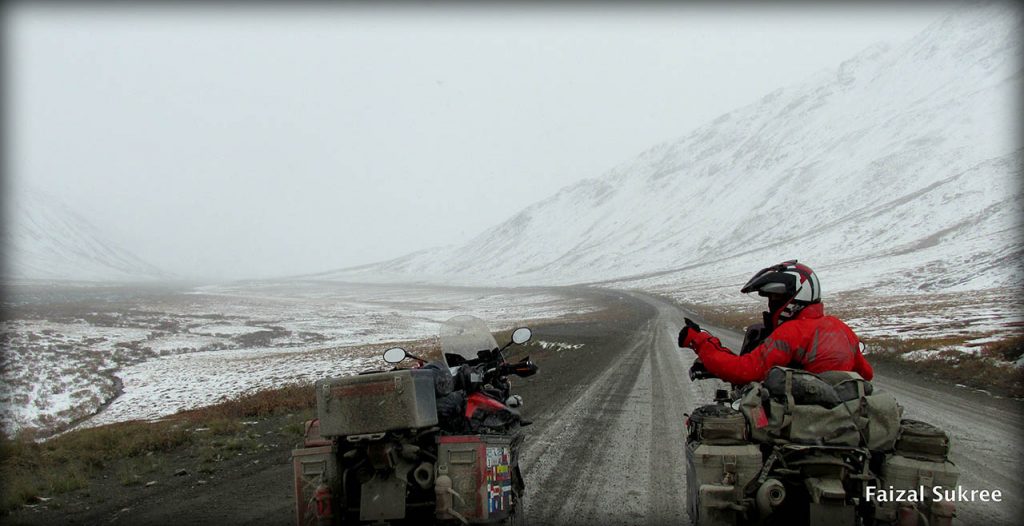 “I was riding along on the ice and and snow when I suddenly remembered that I had taken out my knife during the last refuel stop. It dawned on me that I could have left it back at the station. So I was padding down my jacket while riding, trying to find the knife. I got a little distracted and the next thing you know there was a sharp corner ahead. It was all white so I did not really notice the corner until the last minute. And the next thing you know I was tumbling down a 30 meter deep ravine.” 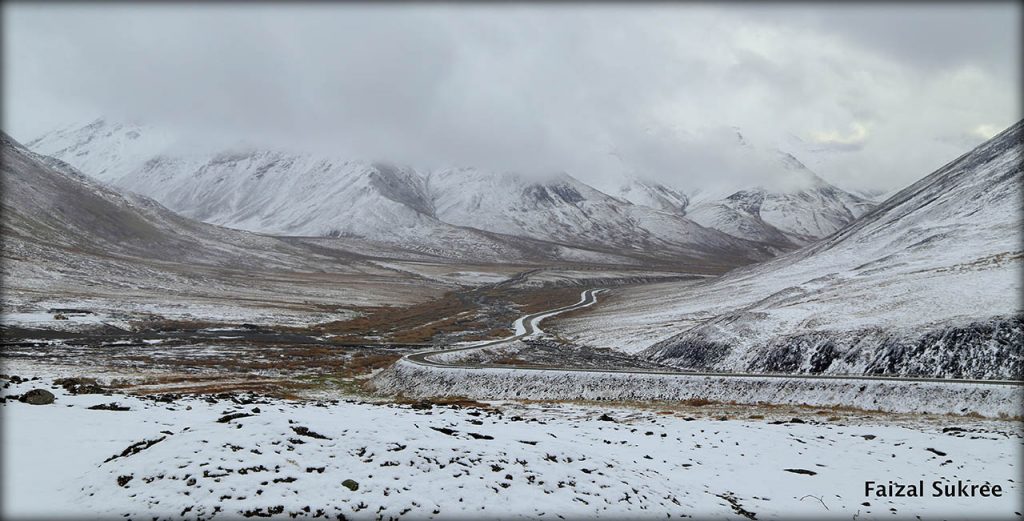 “There was no one there, not a soul. I waited helplessly in the cold for a good half hour until a trucker passed by. He used his rope to pull the bike out of the ravine. The bike had extensive damage on it, but it was rideable. I did some quick repairs to make it road worthy, and rode the bike for about 2000 kilometers before I could really fix it all up. I swear by my BMW F800 GS. I rode it for a good 172,000 kilometers without any problems. And the first major problem came in Seattle, when the radiator fan needed to be fixed.” 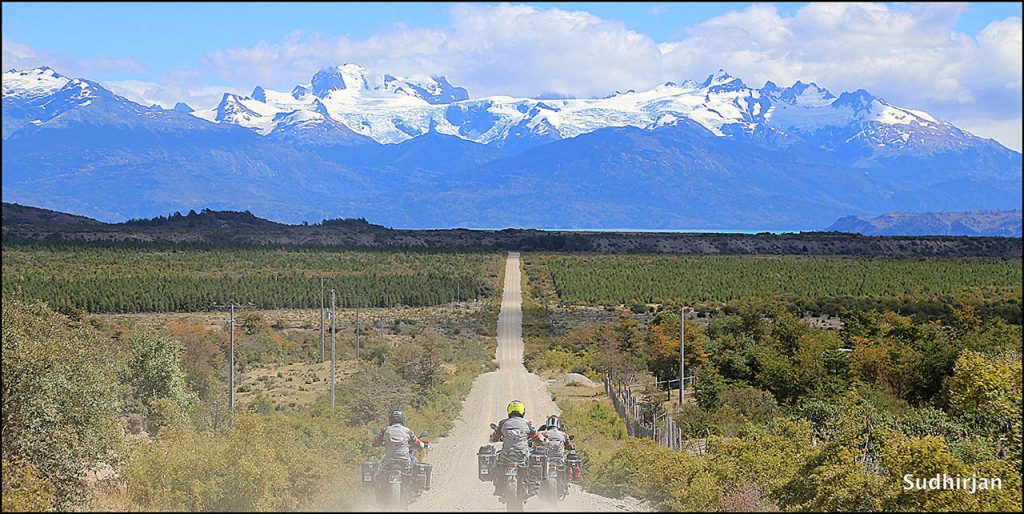 The man has many stories, like how he had to carefully negotiate with AK-47 wielding gunmen at the border between Afghanistan and Tajikistan. But there have been more good memories than bad ones for Faizal. Cigarettes and some sign language got him and his group out of that situation. 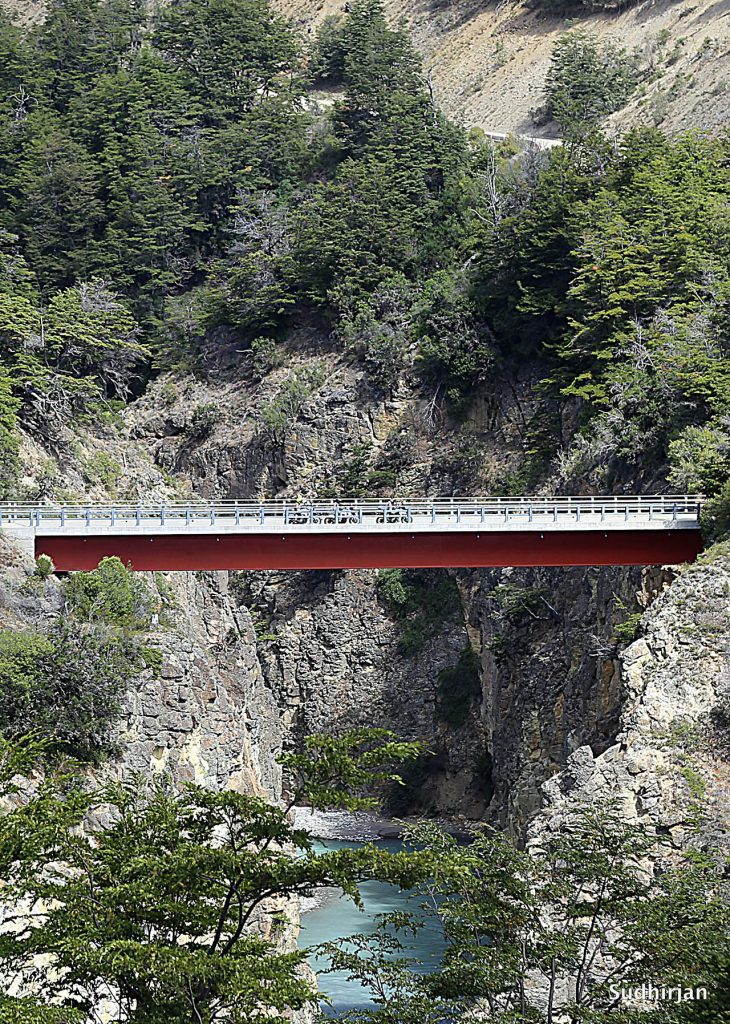 His fondest memory is of a family in Tajikistan.

“It was a stormy night and the snow storm was getting worst. I was with a group of riders and we arrived at this mountain pass just as the storm was turning to its worst. I saw a 5 year old boy there who urged me to stop riding, so we slowed. The boy’s father soon showed up and both of them offered their home for us to stay. I had to stay for 2 days for the storm to subside. They fed the group and made us feel at home. We rode out again after 2 days and it was then we realised how important their help was because the road ahead was really bad. There is no way we would have made it through that storm in roads like that.”

One would imagine that a man who has ridden across 82 countries in 6 continents would have very few or no destinations left to be conquered, but Faizal is yet to ride in Africa. He calls Africa the ride of a lifetime, and is already planning a riding trip throughout Africa. “It will take me six months to ride Africa, but it is my dream to do it. I want to experience the country, the animals, the people, the terrain. I will ride Africa soon, and am preparing for the trip.” 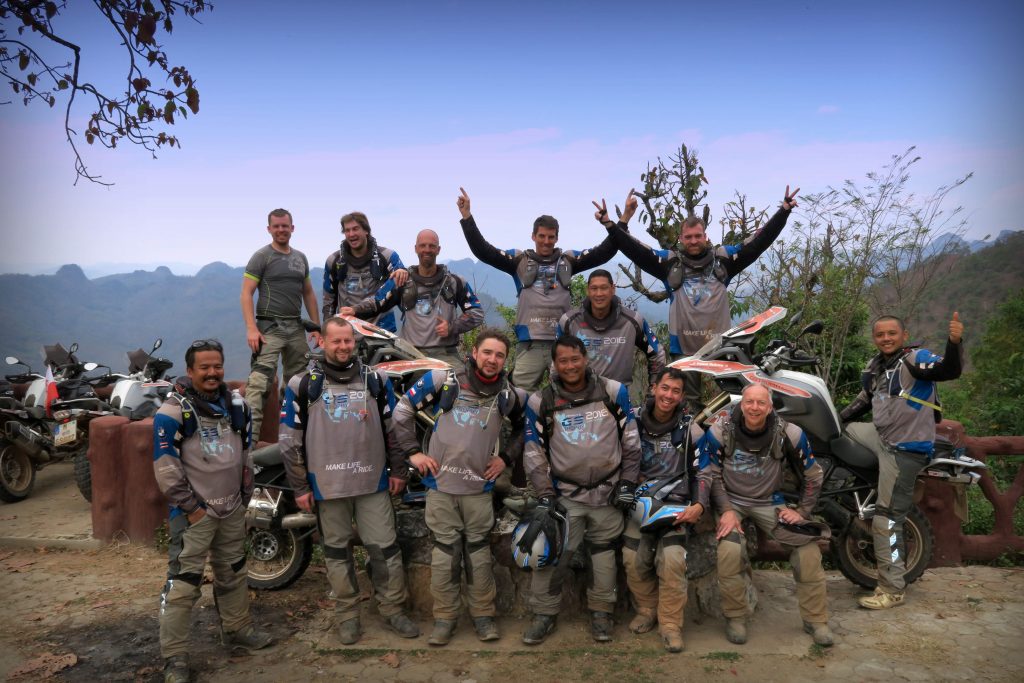 Besides being an adventure freak, Faizal is also Malaysia’s first representative to the glamorous and extremely challenging BMW GS Trophy. The GS Trophy is the biggest adventure motorcycle challenge in the world, and Faizal says it is one of his biggest honors to be chosen to represent Malaysia for it. 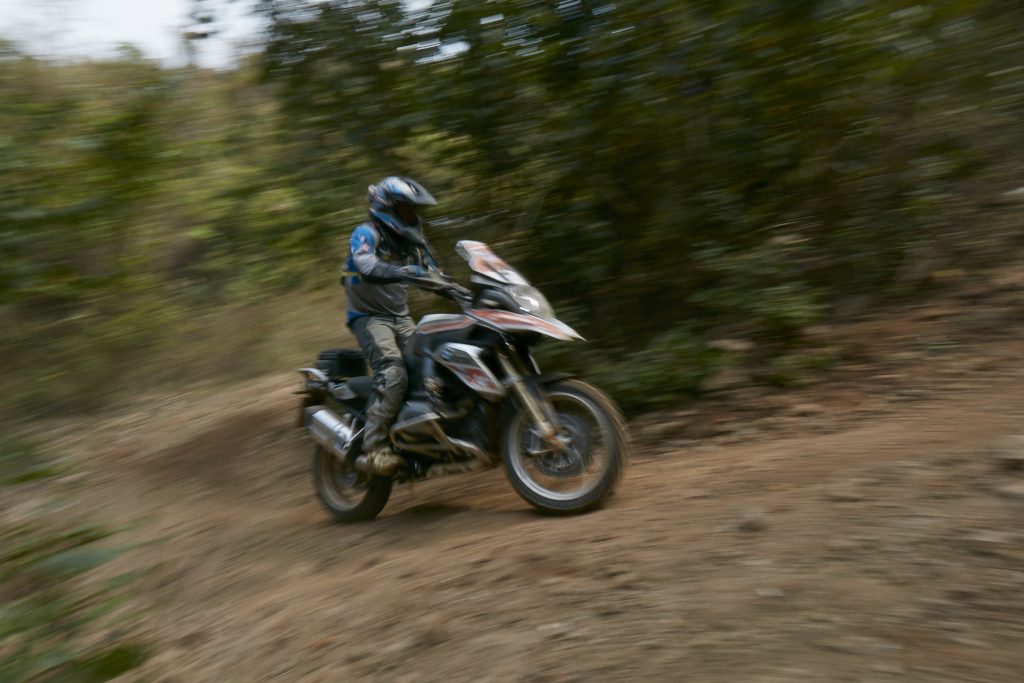 “I was riding in Morocco when it received news that I had been chosen to represent Malaysia. Almost immediately I rode about 3000km to Madrid, left my bike at the Malaysian embassy there. Next thing you know I was on a flight back to Malaysia to rest for a few days. Then I travelled to Phuket Thailand for the qualifiers, and then to Chiang Mai for the finals. It was truly an honor to be competing with the best GS riders in the world.” 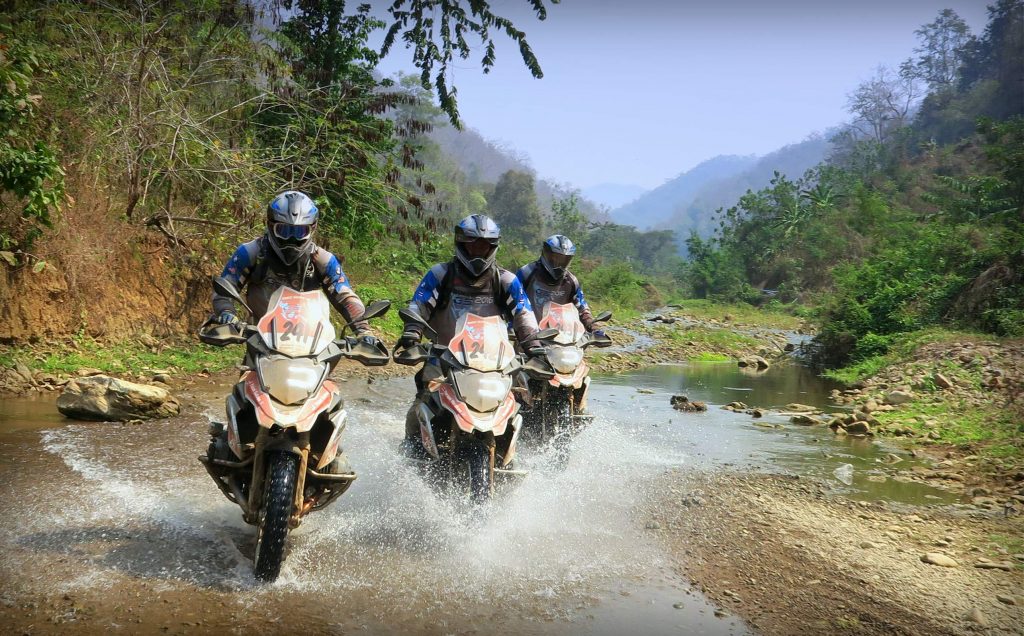 Faizal is one of the few true adventurers left, the kind that can simply drop it all and go away for a while to discover the world. Even as I write this, he is somewhere in Europe, I know because he keeps posting all this beautiful sceneries and such on his Facebook and Instagram page and it keeps making me jealous.

A true biker who credits his wife and family for their support and understanding.

All photos by Faizal Sukree and friends.

Find out more about the BMW F800 GS here!