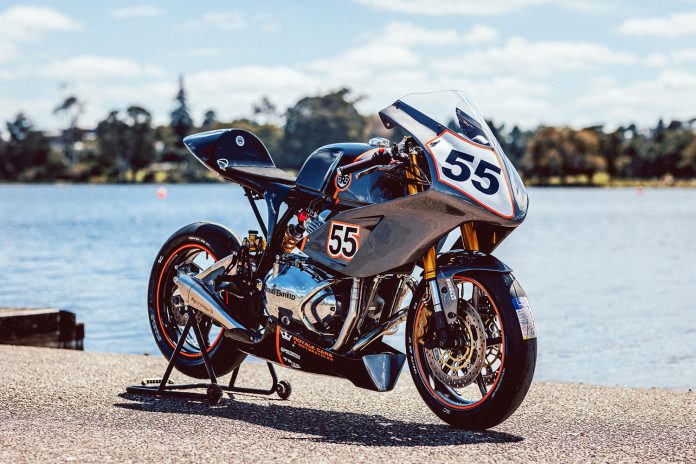 Royal Enfield Continental GT650 gets reimagined as a modern-day race bike in this custom-built No. 55 GT 650 Production Racer.

Meet the No. 55 GT 650 Production Racer. It’s a one-off, custom-built special based off the Royal Enfield Continental GT650 café racer designed and built by Royale Motorcycles from Hamilton, New Zealand.

The No. 55 GT 650 Production Racer came out as the winner in the second edition of the Busted Knuckles Build Off challenge – a special custom bike build competition organised by Royal Enfield Australia & New Zealand specifically for its dealers. 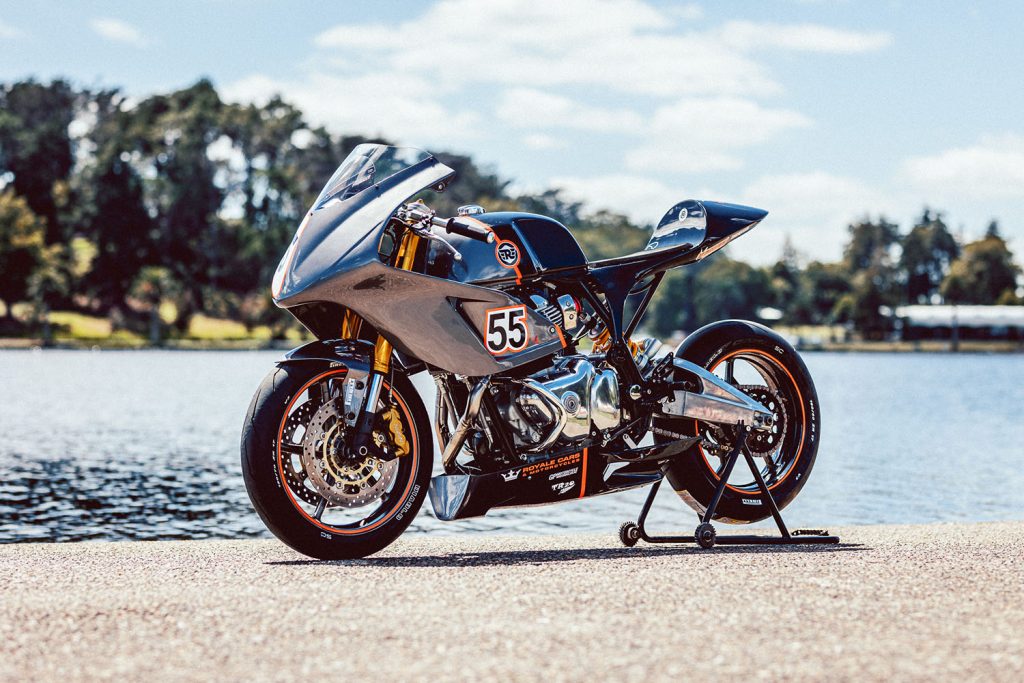 According to Royale Motorcycles, the inspiration for No. 55 GT 650 Production Racer came from the Royal Enfield ‘GT Cup’ production racing series in India. Though the final design might seem as far away as you can get from Royal Enfield’s GT as you can get, it’s actually not.

Just remember that original café racers that inspired the Royal Enfield GTs were themselves homages to the Isle of Man TT race bikes from the 50s and 60s. Indeed, these were the sportbikes of their era, hence reduxing the 650 twin into a modern racer somewhat makes sense. 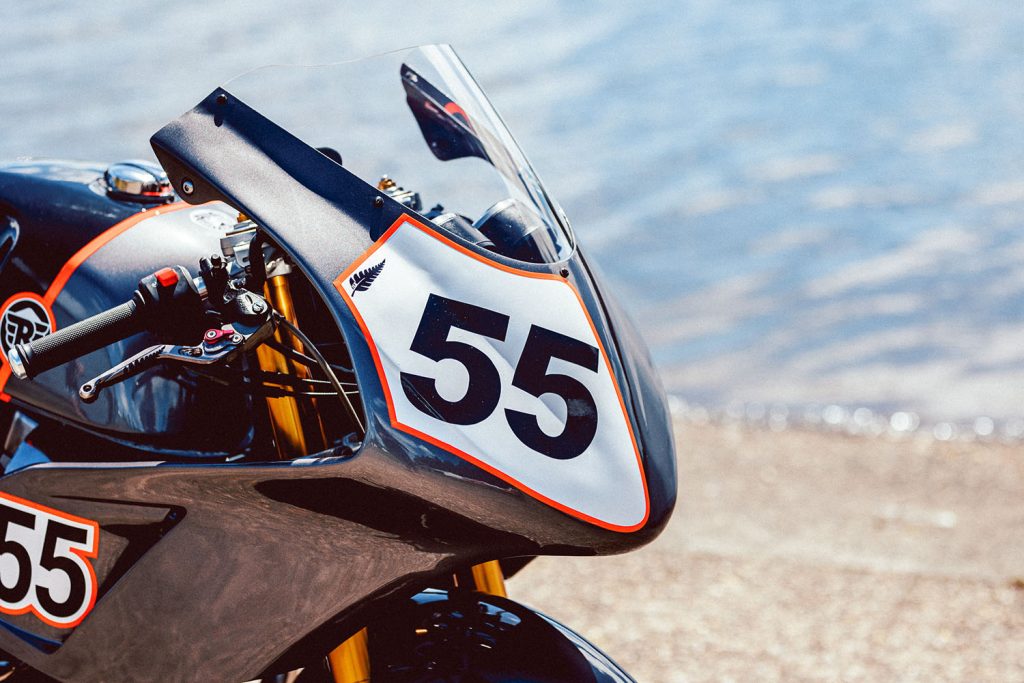 “It was all about doing something very different. We kind of went a little crazy. Mainly because we didn’t want to build another café racer, bobber, or tracker,” said Dylan from Royale Motorcycles about their winning No. 55 GT 650 Production Racer build.

Aptly, the 350 hours or so Royal Motorcycles spent building the No. 55 GT 650 Production Racer bore fantastic results. “We sourced many parts from an army of other bikes and manufacturers to ensure that what we finished up with was a proper racer and not just a look-alike,” added Dylan further.

The No. 55 GT 650 Production Racer features an aluminium swingarm lifted from a Honda, the complete front end taken off a Triumph Daytona, 17-inch wheels shod in Pirelli Diablo SuperCorsa tyres, as well as a bespoke exhaust system that features a slick hydroformed HP Corse end-can.

As for the bodywork, Royale Motorcycles opted not to simply replicate a ‘GT Cup’ kit or adapt a full fairing design from another machine. Instead, they’ve crafted a completely bespoke half-fairing and belly pan that’s both beautifully formed and fully functional in terms of aero and wind protection. 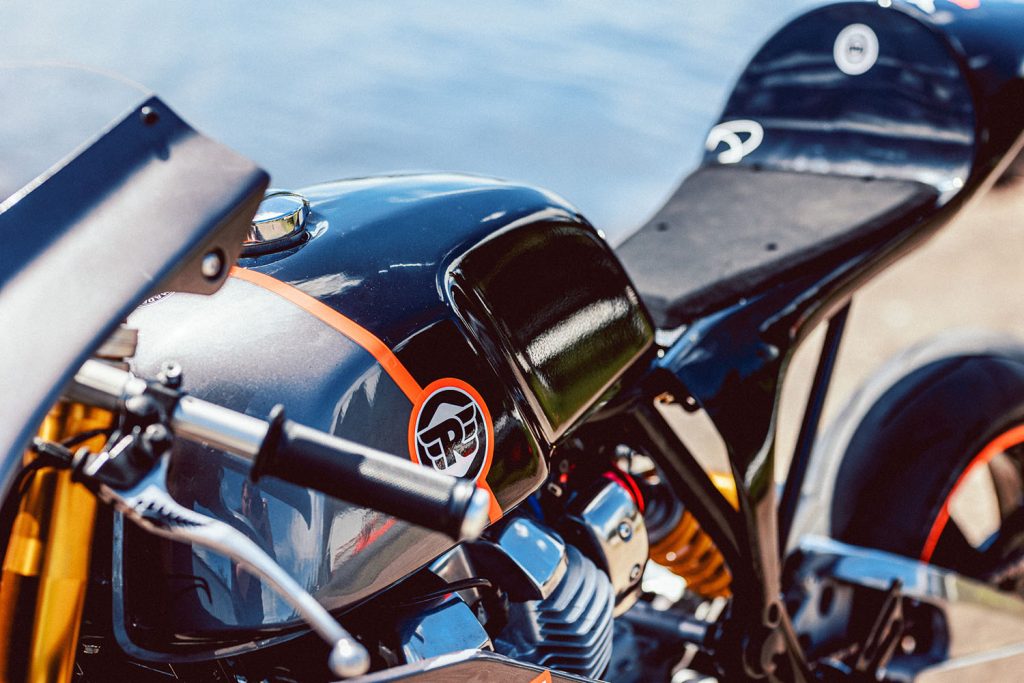 Clearly, the only thing left untouched from the stock Continental GT650 is the fuel tank, which has been painted in a stunning two-tone scheme. Elsewhere, there’s also a tasty orange stripe motif plus various logo decals that completes the modern race bike look for the No. 55 GT 650 Production Racer.

Words do little justice to this beautiful and unique build. You can check out more of the No. 55 GT 650 Production Racer in the gallery prepared below.