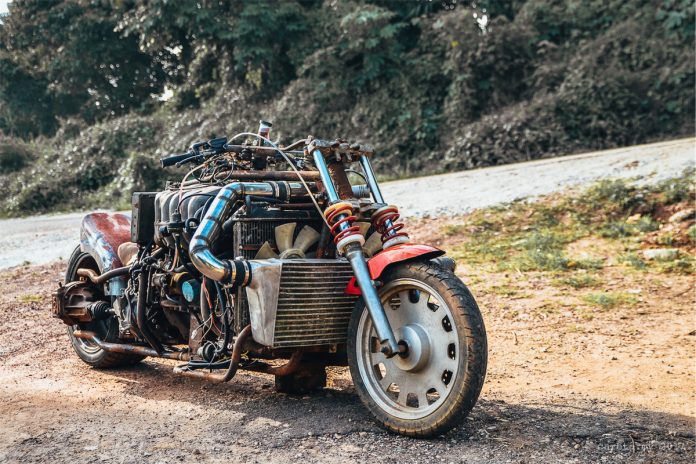 Mr Andul Rashid Ismail aka “Acid Welding” has created a Nissan Skyline powered custom cruiser as part  of a personal project for this year’s Art of Speed festival.

The ultimate custom cruiser powered by an RB20 engine taken from Acid’s Volvo drift car started off as just an idea when he couldn’t get a good deal for the car.

The project was able to materialise with the help of his 21 year old teenage son together with some determination, passion and good ol’ know-how to build the “RB20 Monster”. 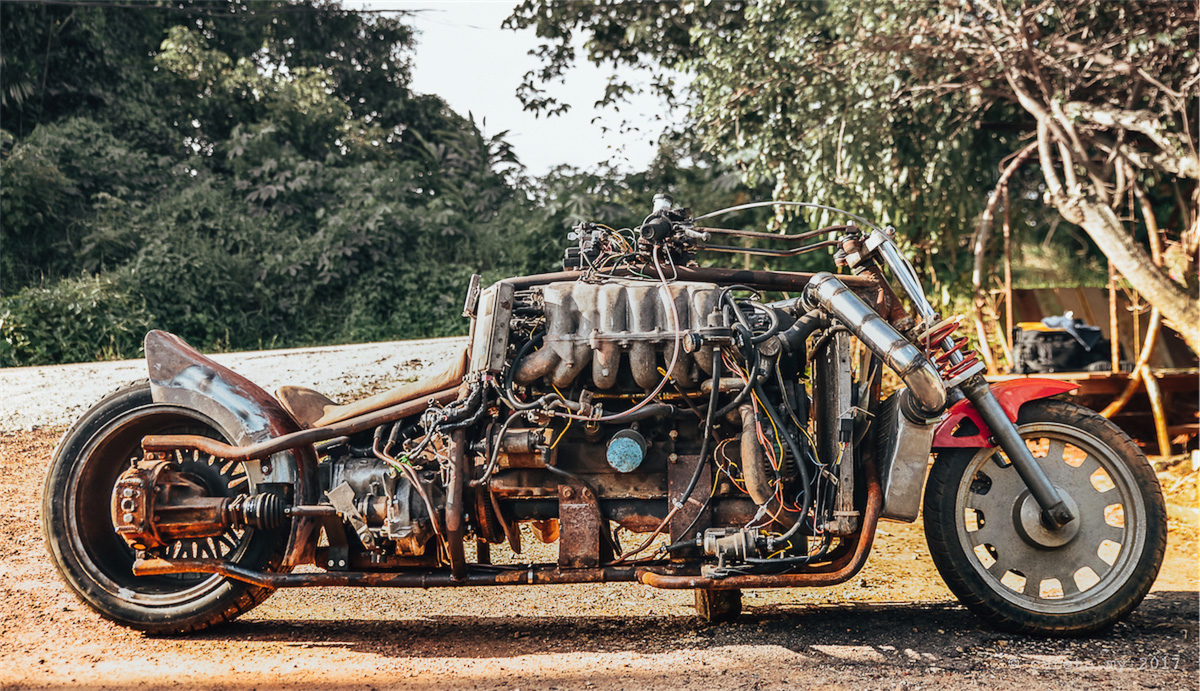 Yes, you read that right. Somewhere in Malaysia, there’s a monstrous Nissan Skyline powered custom cruiser being completed because why not, right? Photos of the “RB20 Monster” have been frequently popping up in various social media platforms and our very good friends from Careta.my decided to hunt down this beast and its maker. 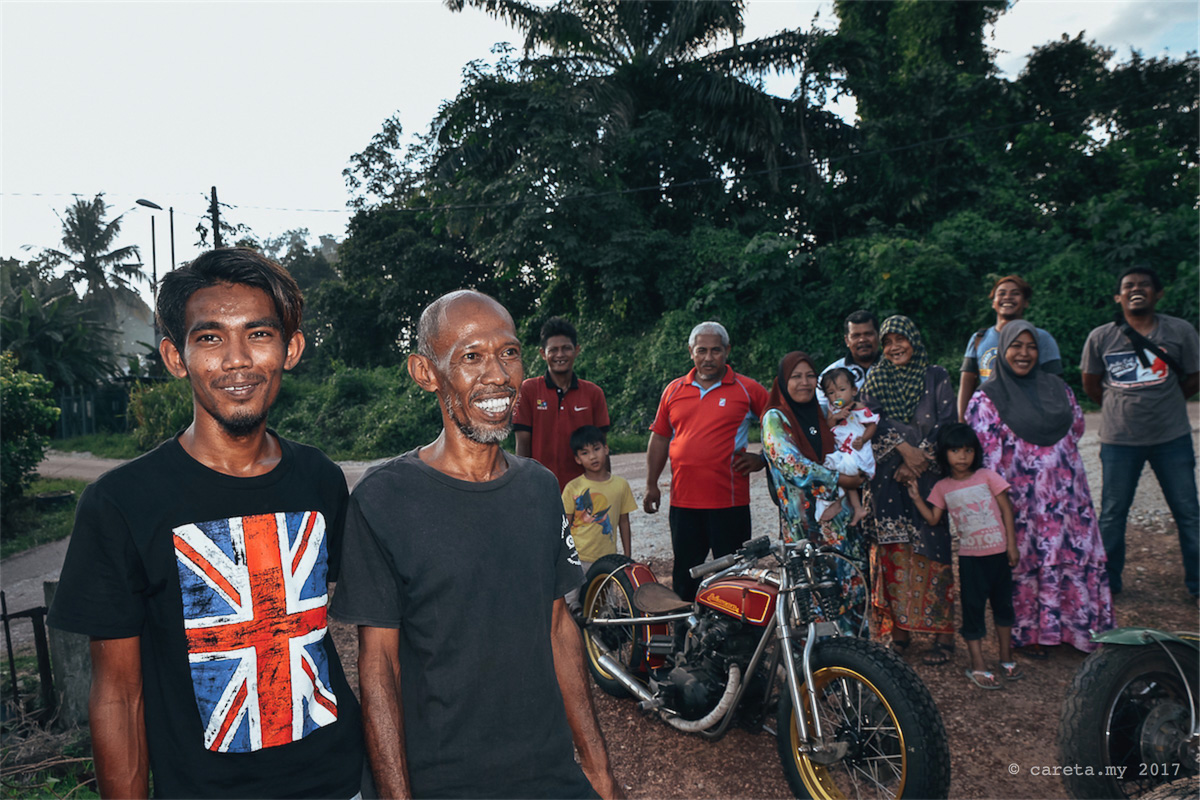 Their search led them to Batu Pahat, Johor where they met with Mr Andul Rashid Ismail aka “Acid Welding” aka “The Mad Scientist” aka “Mechanical Genius”. The photos of his RB20-powered creation quickly gained a lot of attention on social media with mixed emotions but that has not deterred Acid from completing his masterpiece. 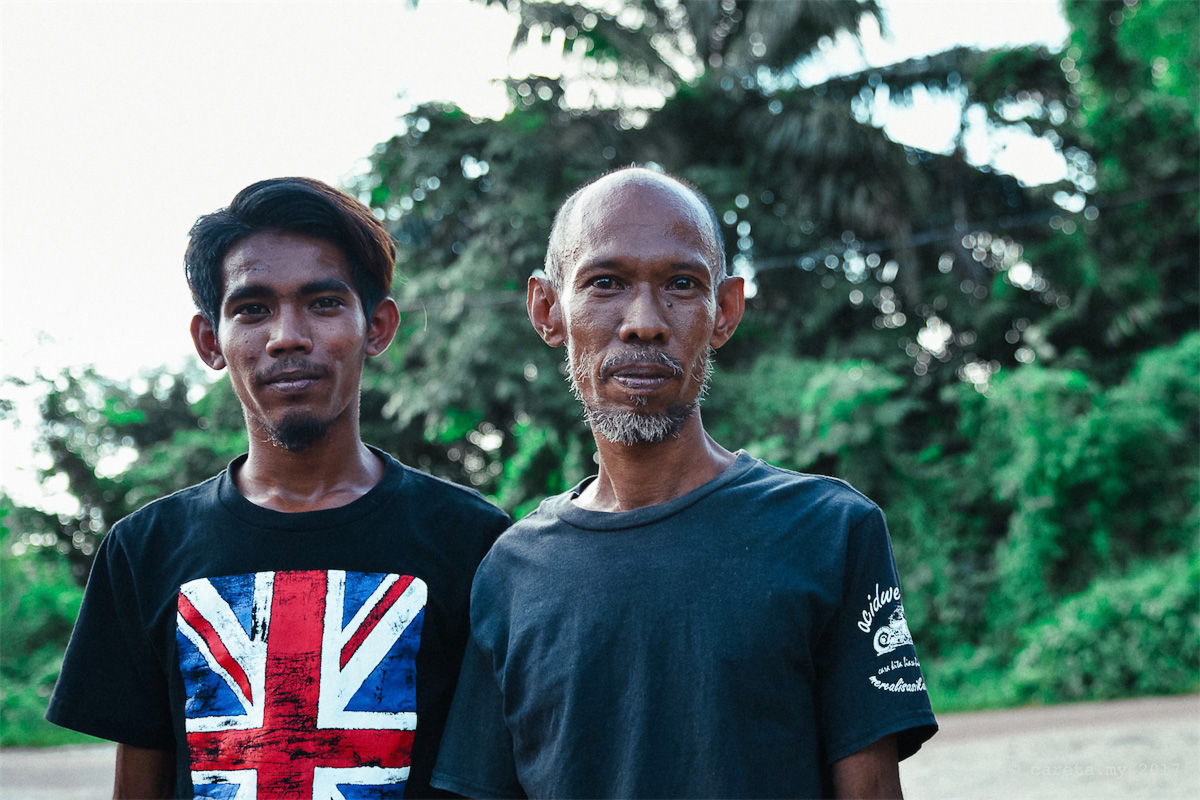 At 47 years old, Mr Andul runs a welding and factory equipment maintenance business by trade. He has being so since 1988 and he has basically mastered all sorts of welding works where he has honed his craft for almost 30 years now. 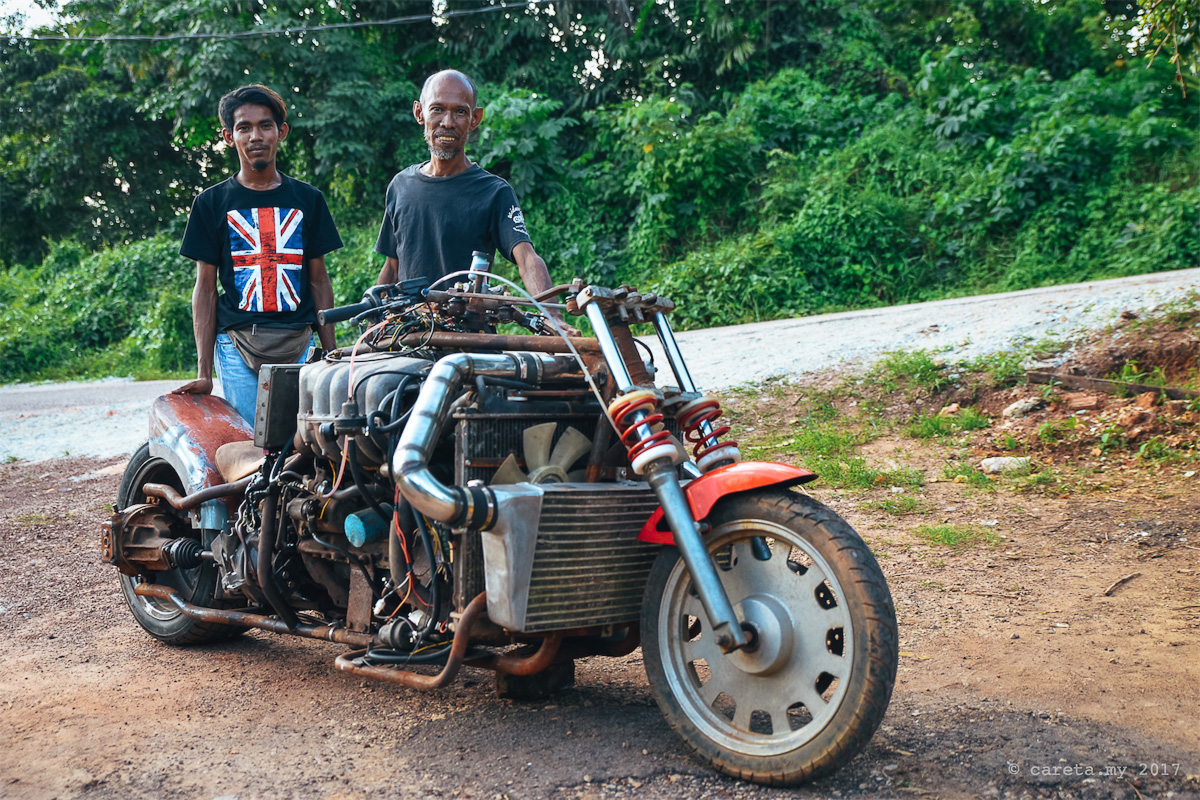 Initially, Mr Andul aka “Acid” had his own garage but then was forced to relocate to his own home when the original owner of the land wanted it back. With sheer perseverance and persistence, he took all his jobs and projects back home and continued on. 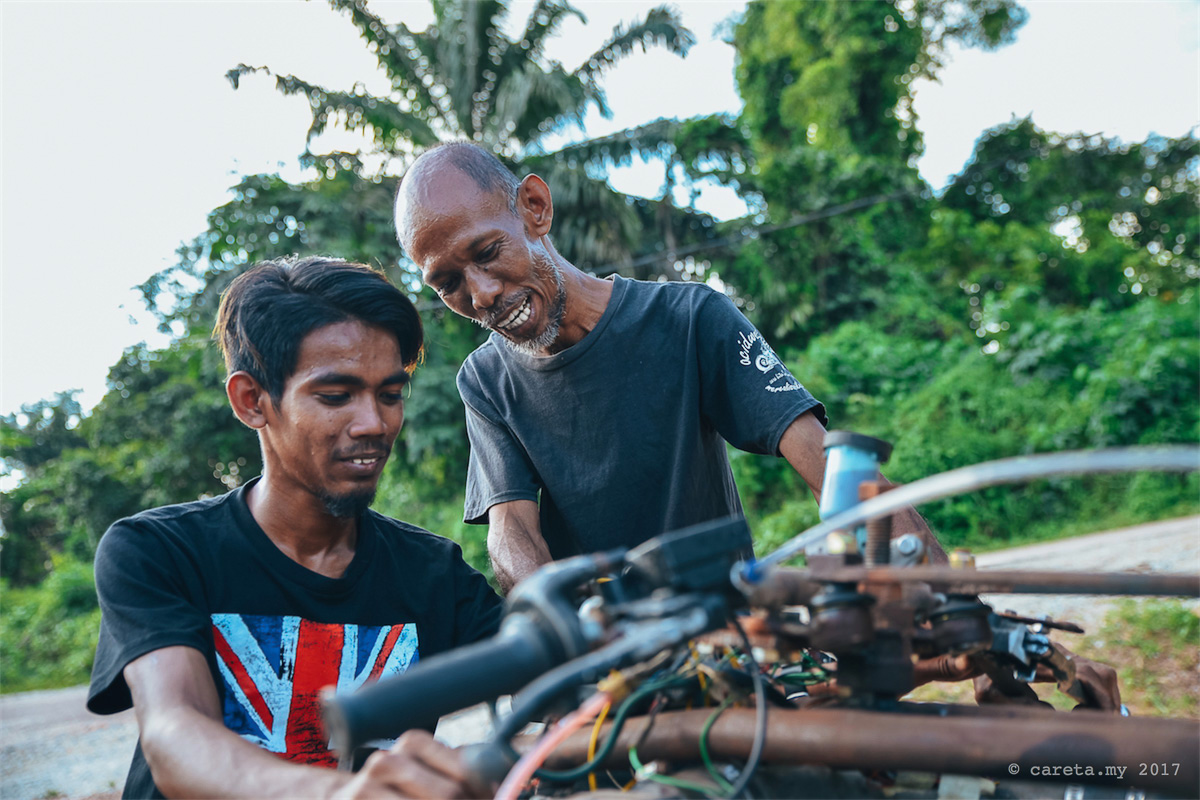 This father of four has always been interested in cars and motorcycles (basically anything with wheels). He’s also an expert in building field equipments and apparently, his 21 year old teenage son shares the same passion where he has gained his education from the Johor Education Foundation College with a motorcycle technician certificate. 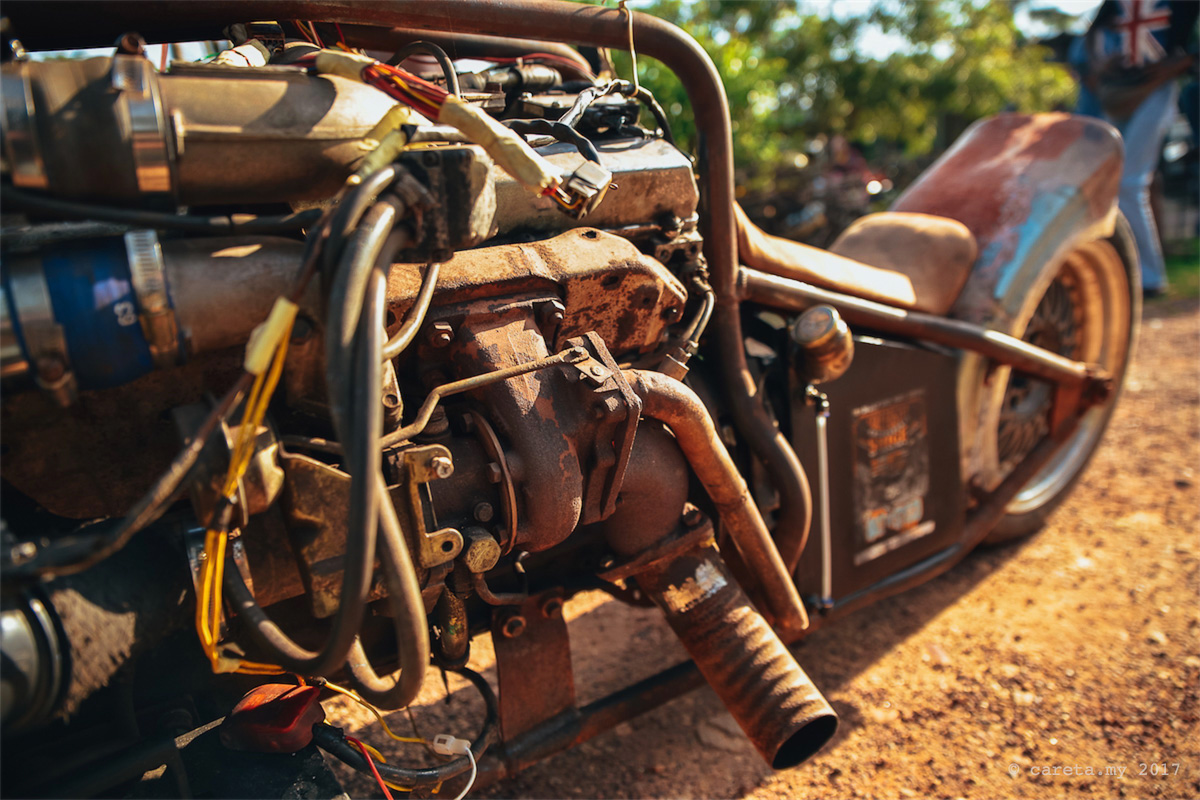 Referring to the RB20-powered monster custom cruiser, some folks are too quick to judge it as a waste of a good engine but those who know Acid personally are also aware that the engine has been used extensively in his Volvo 240 drift machine. 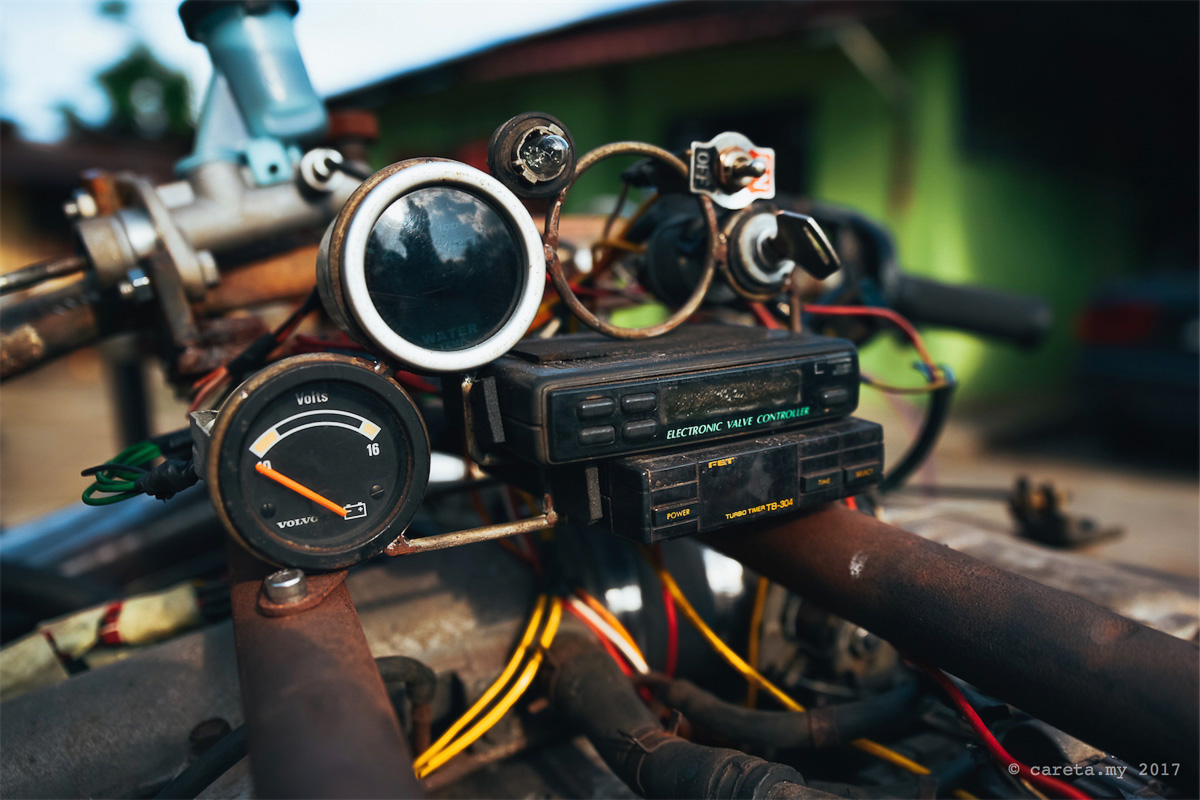 “I’ve been tinkering around with the RB20 for quite some time now. I know the motor inside out” said Acid when asked about the project. Acid has been creating a number of customised bikes that were displayed during the Art of Speed expositions on several different occasions. 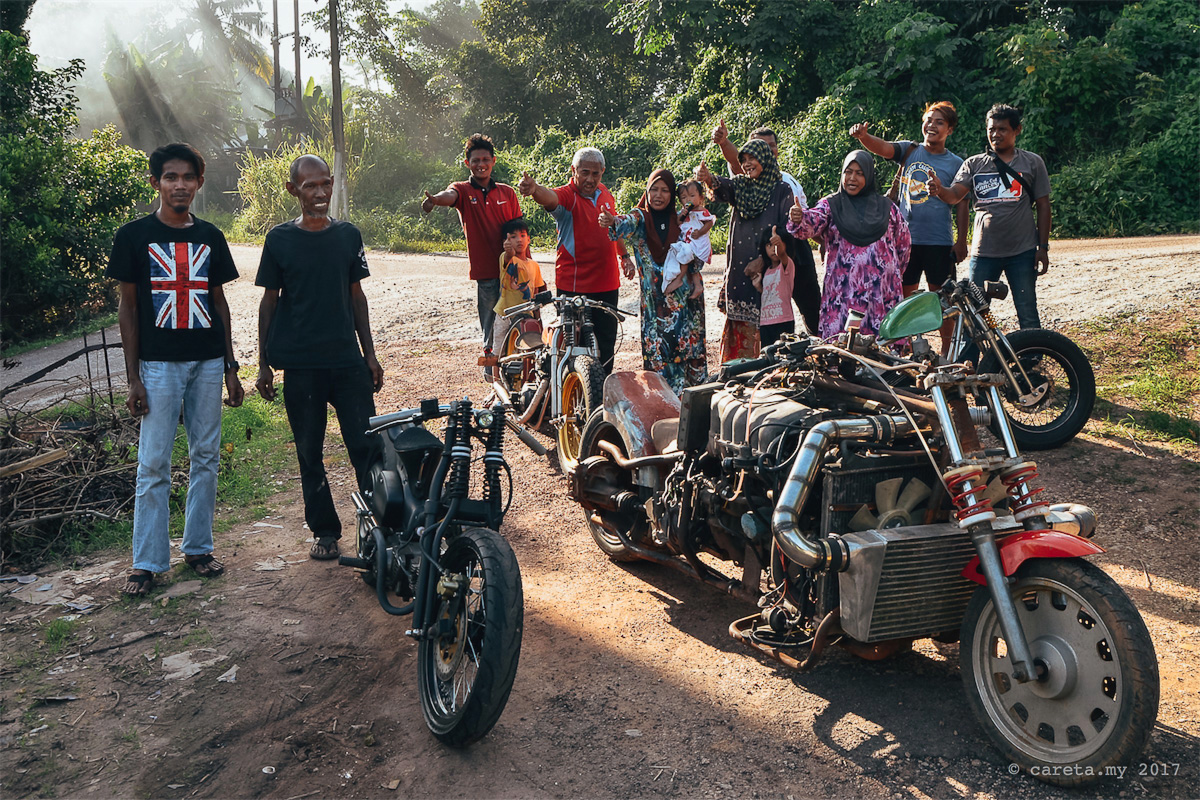 Although there were some negative feedback online, Acid has garnered a lot of support from his friends, families and the entire village with the go ahead to make all of them proud. 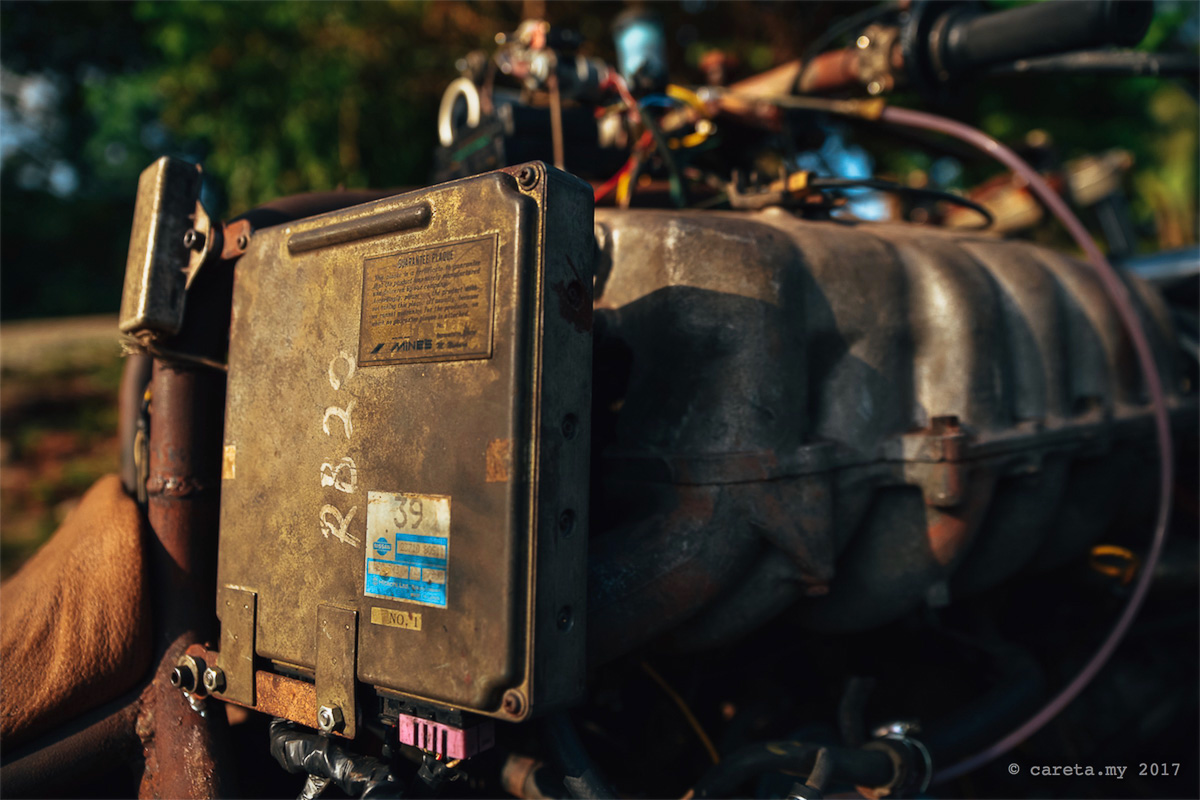 The project was brainchild when he was gaining more interest in two wheels but at the same time couldn’t manage to sell off his RB20-powered Volvo drift machine because all the offers he received were just too low. 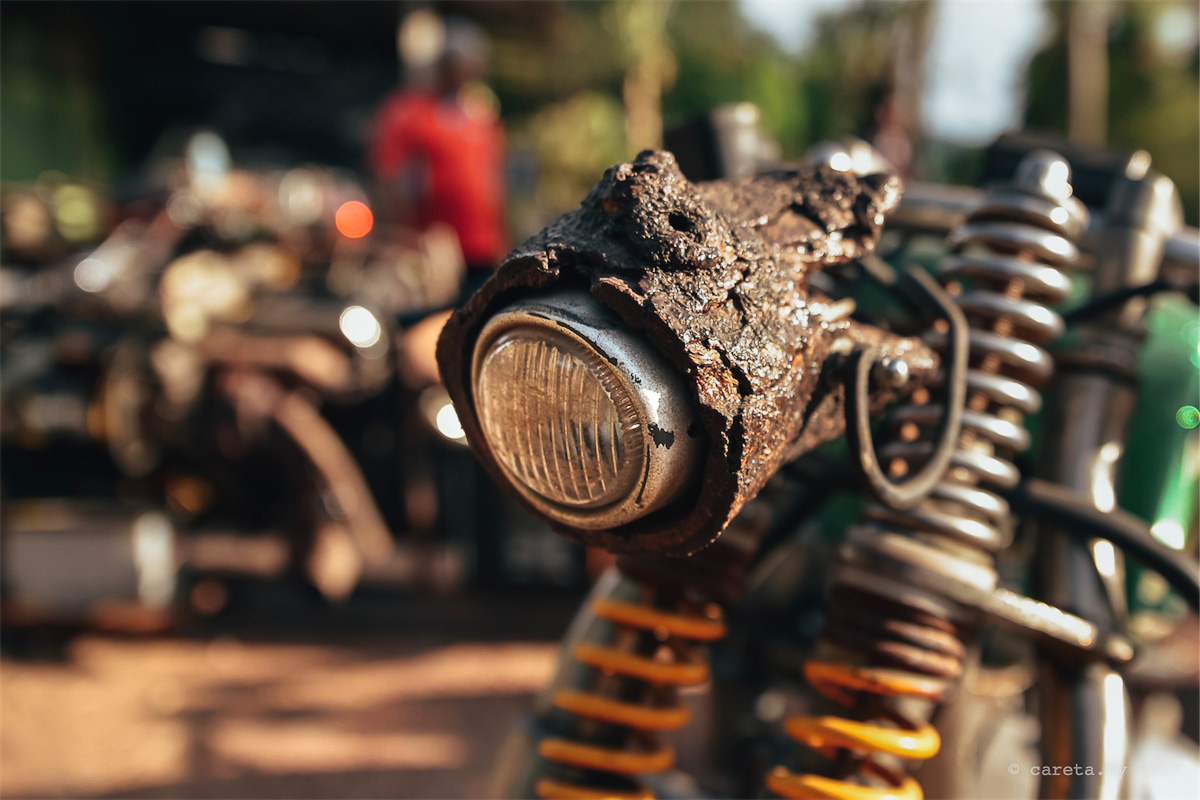 “Rather than opting to sell and get irritated with the deal, it’s better for to not sell it all and use the engine for another personal project. It’s been in my head for a while and I can finally complete it now” said Acid. 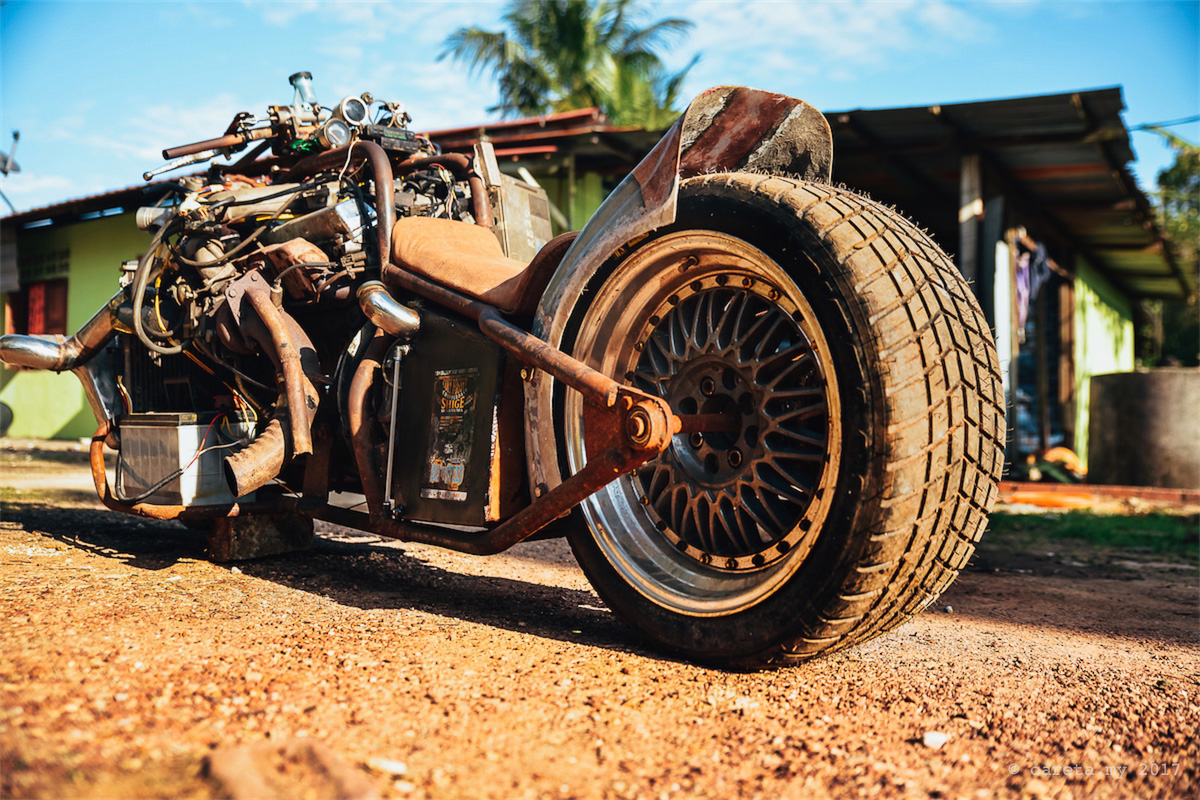 Together with his teenage son, the boys started work on their ultimate project with a number of modifications and additions that’ll stop anyone in their tracks but not Acid and his son. Parts like the radiator, Trust intercooler, Mines Japan ECU, HKS digital boost controller, Fizz turbo timer and blow off valve were taken from the Volvo drift car. 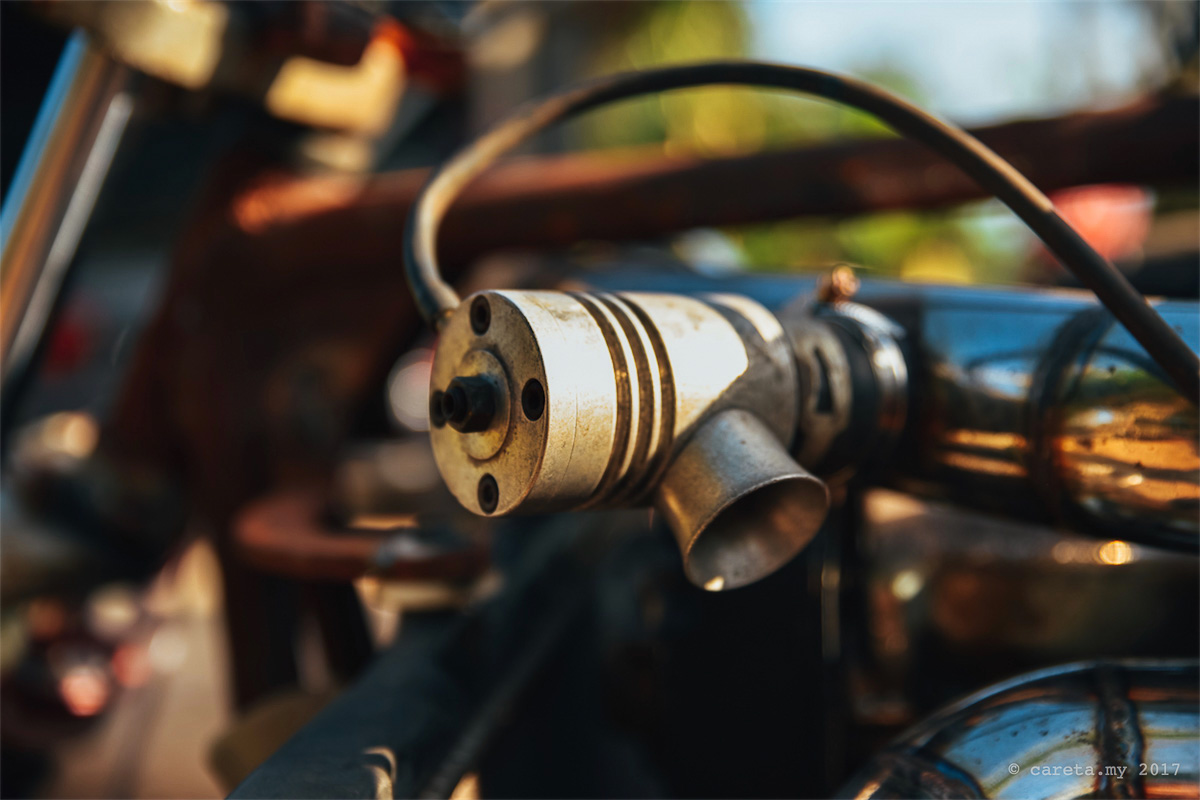 Acid bought 40 feet of high grade piping to build the frame of the motorcycle. With years of welding experience, Acid knows his stuff when it comes to the right materials to be used for such a momentous project. 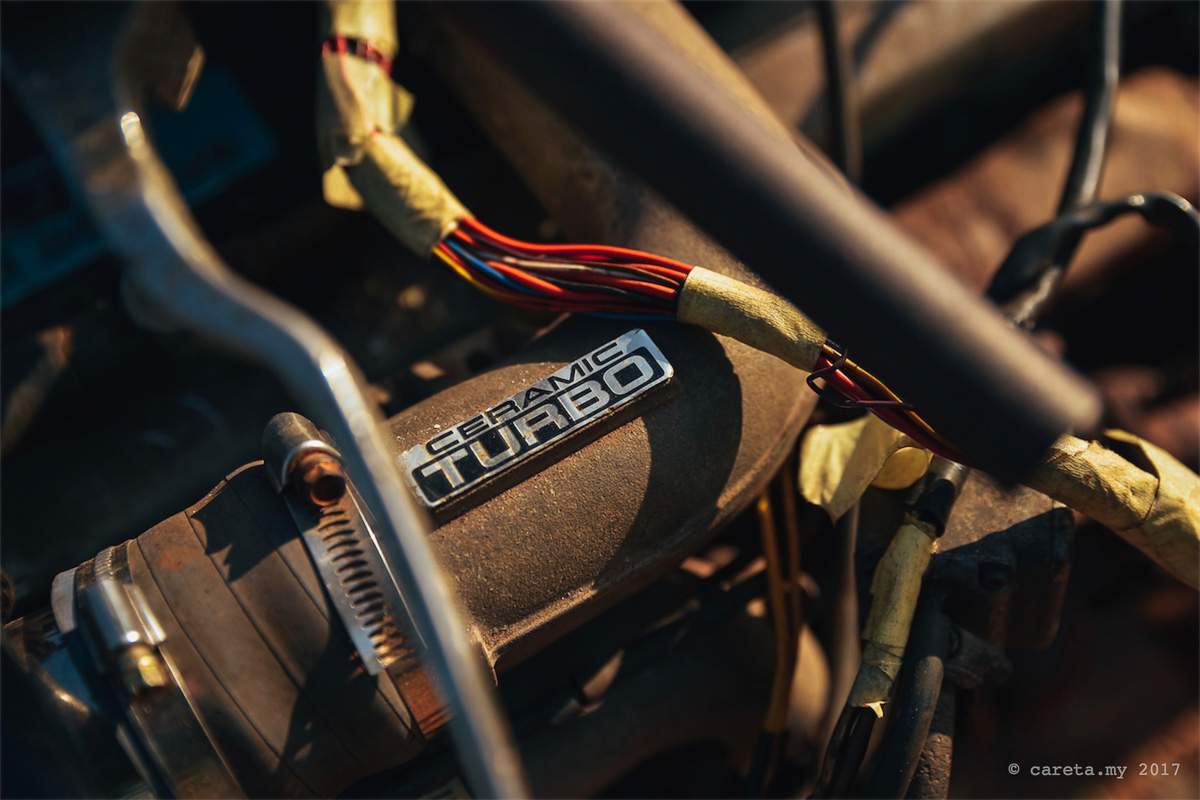 The RB20 engine is mounted directly into the frame similar to early Harley-Davidson motorcycles. No engine mounts to absorb all that vibrations from the engine, just raw riding experience from one of the world’s most highly regarded vehicle engines of all time. 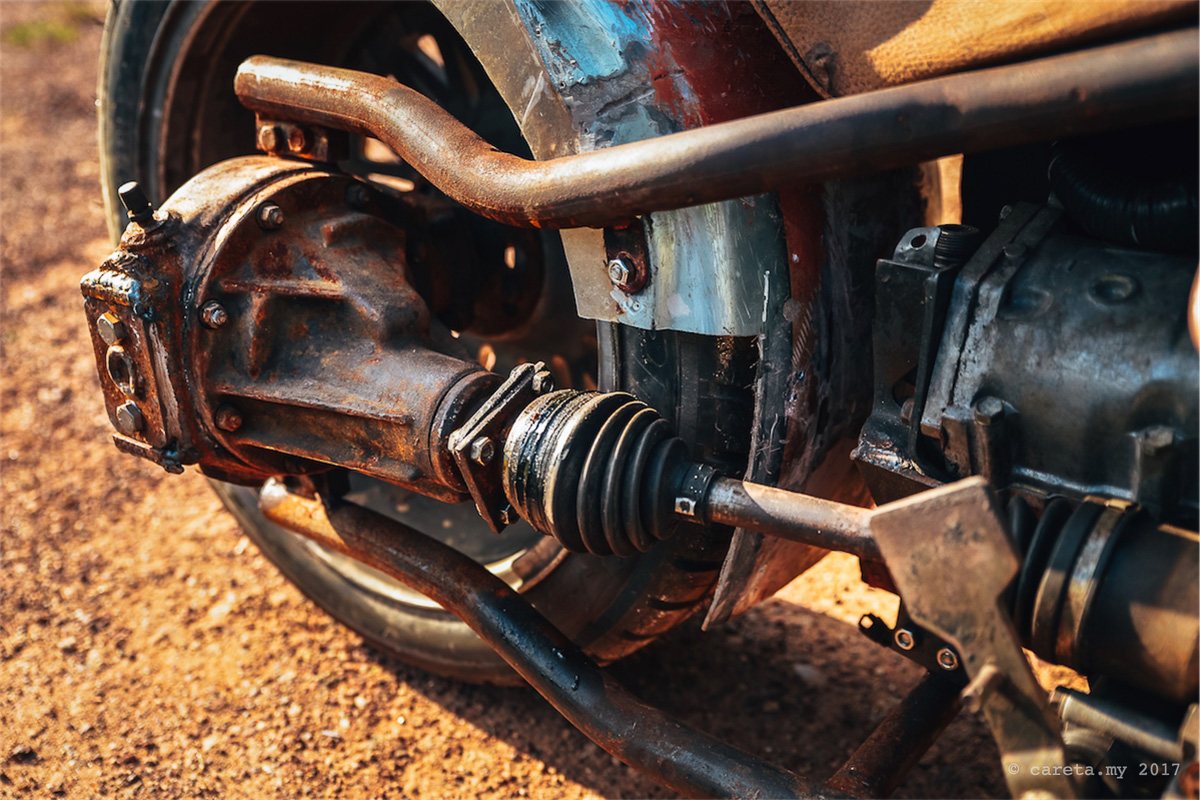 All the power is transferred down to the rear wheel via a four-speed manual transmission taken from a Perodua Kancil 660 car due to its short and compact size. The final drive comes is a form a shaft drive taken from the same vehicle but some modifications were required to get it working for the custom cruiser. 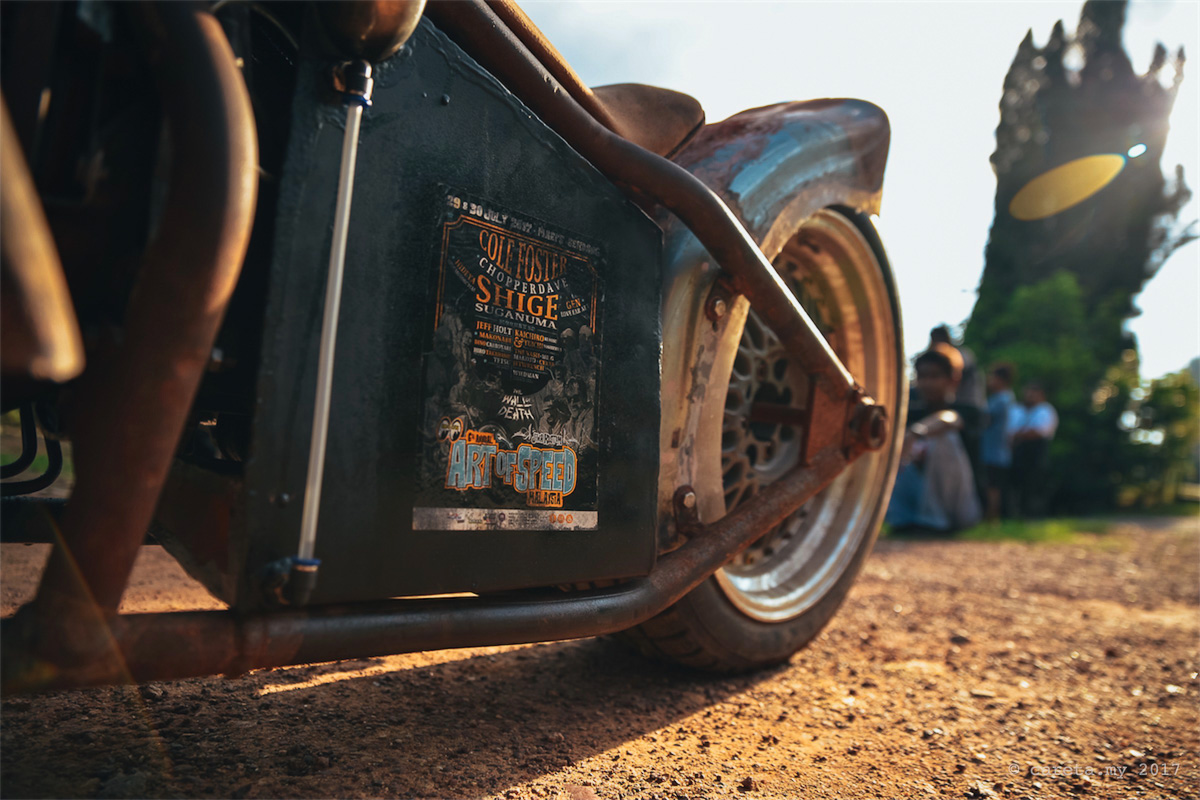 The biggest issue according to the father and son team was getting the entire transmission clutch mechanism taken from a Perodua Kancil compact car to match perfectly with the Nissan’s powerful RB20 flywheel. They got their answer from a clutch pump obtained from a Proton Wira to make sure that all that power is transferred efficiently to the rear wheel. 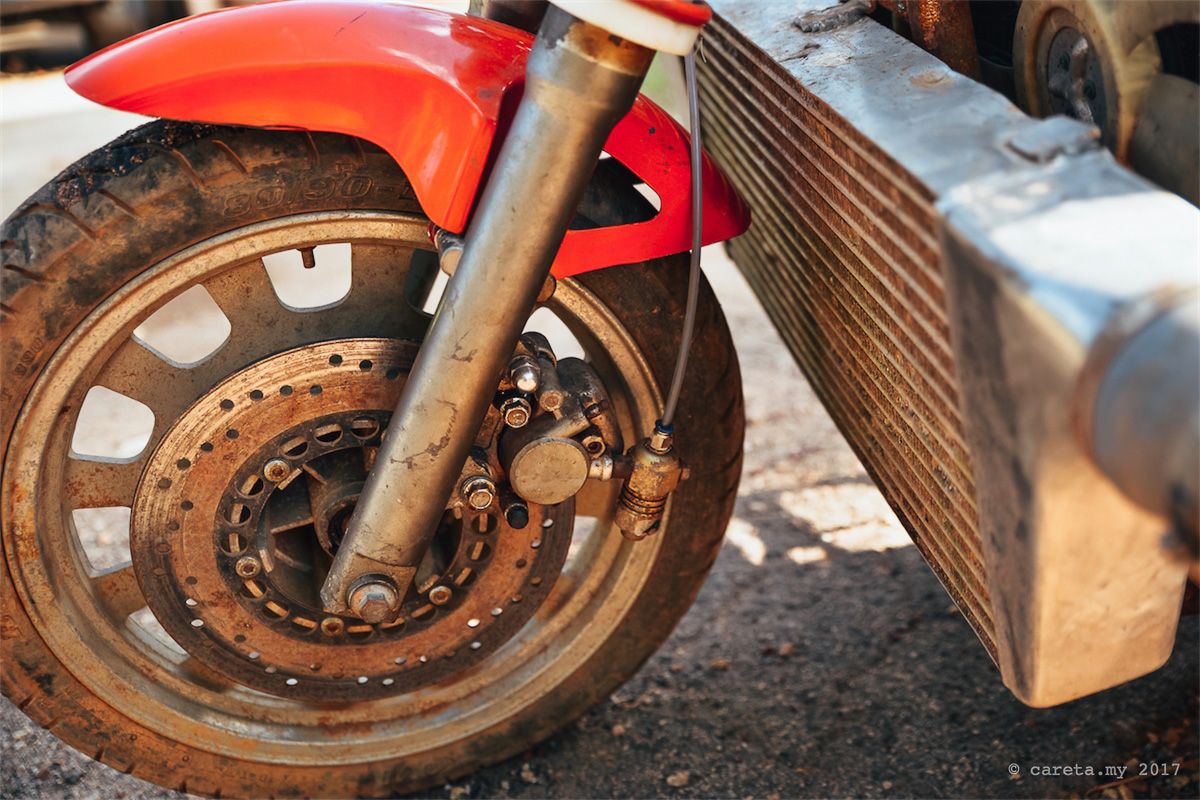 The front fork and tyre come courtesy from an old Nitro 150 cruiser together with the front brake system. Currently, there’s only the front brake to assist with stopping the bike but further plans of improving the overall braking system will be implemented once Acid finds the right one for his RB20 Monster. 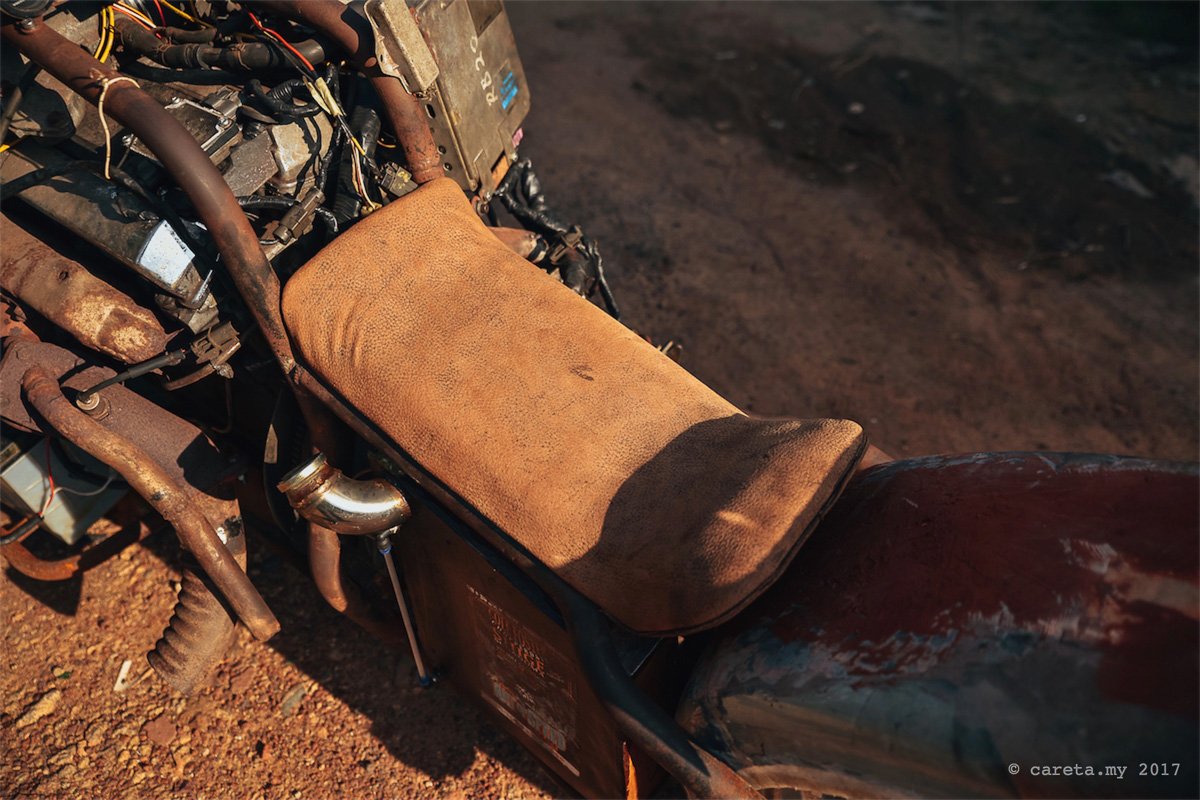 All in all, Acid has spent over RM1,000 to cover all the costs of building this dream machine. Although the cost has been kept to a minimum, the sheer knowledge, experience and determination are all priceless that can’t be imitated by anyone. The one-off project is a super unique project made by a very unique individual. Those who are interested in hiring Acid’s services, you may contact him at +60 17-733 1984. 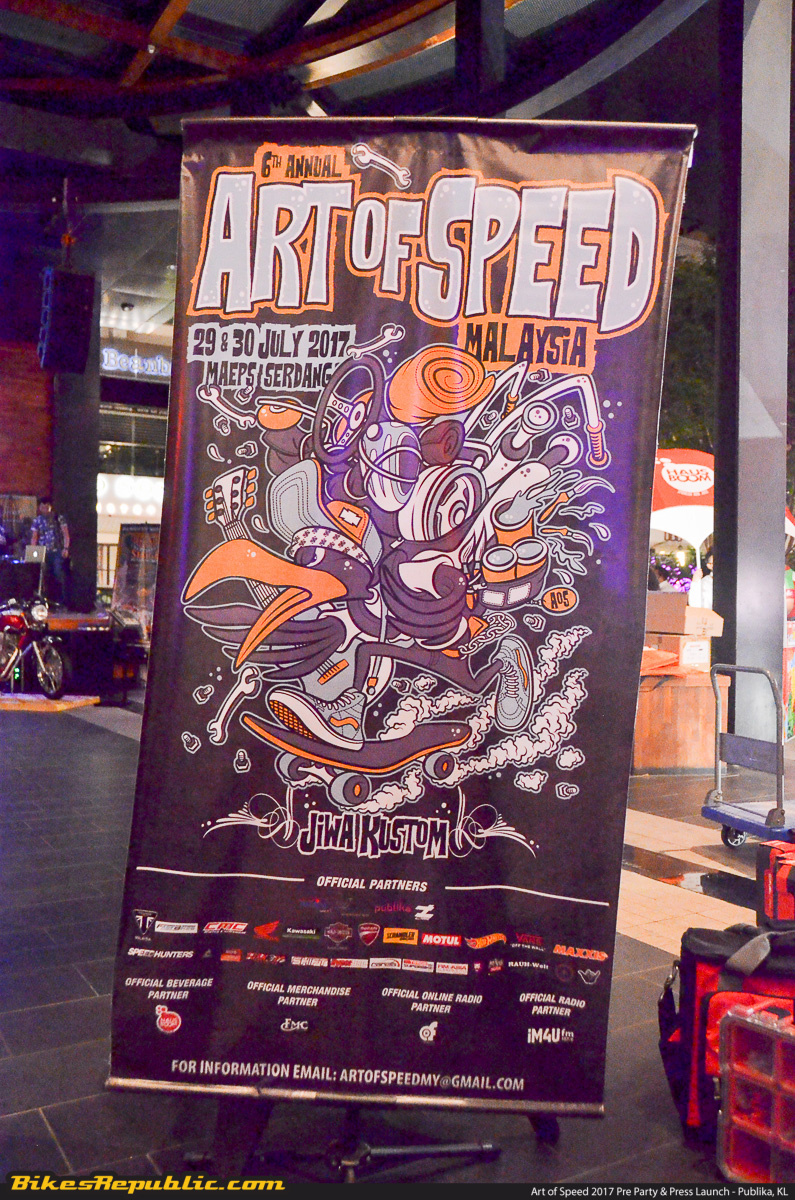 The bike will be displayed at this year’s Art of Speed festival from 29 to 30 July 2017 that’s going to be held at the Malaysia Agro Exposition Park Serdang (MAEPS), Selangor. To know more about the 2017 Art of Speed, CLICK HERE. 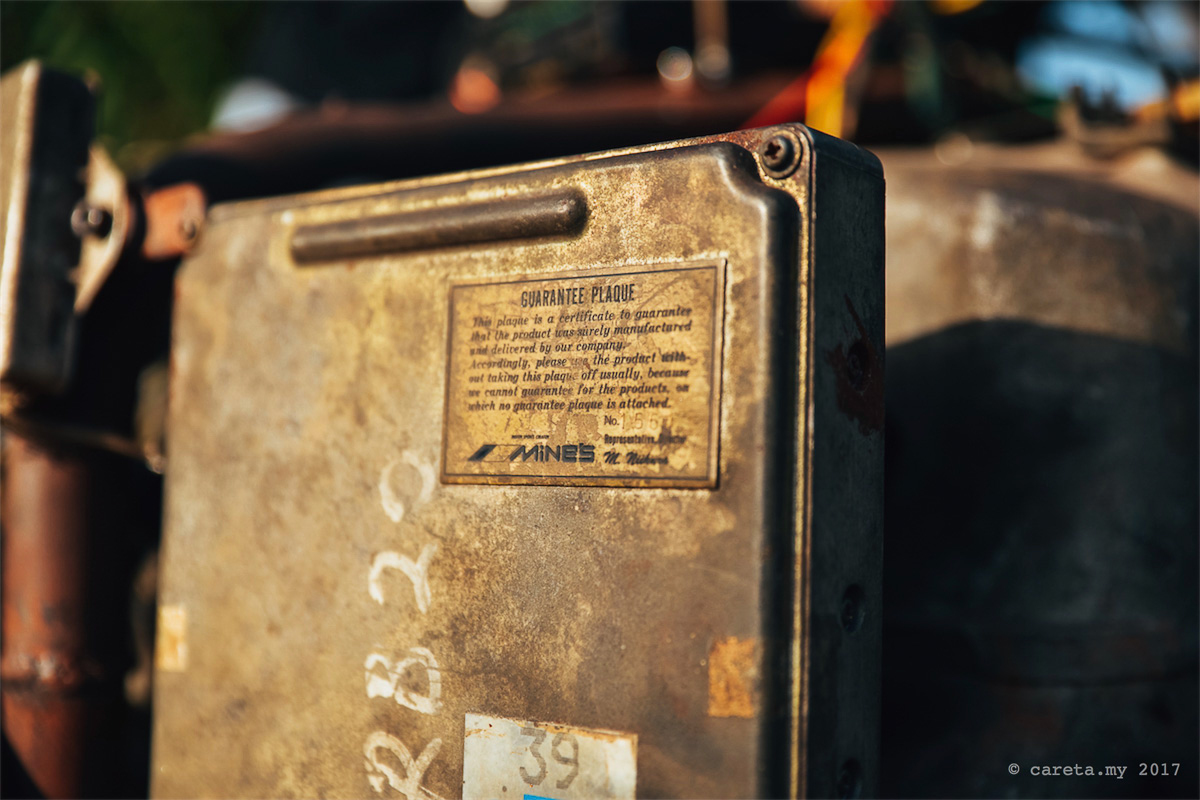 To read the original feature written by Careta.my in Malay, CLICK HERE.