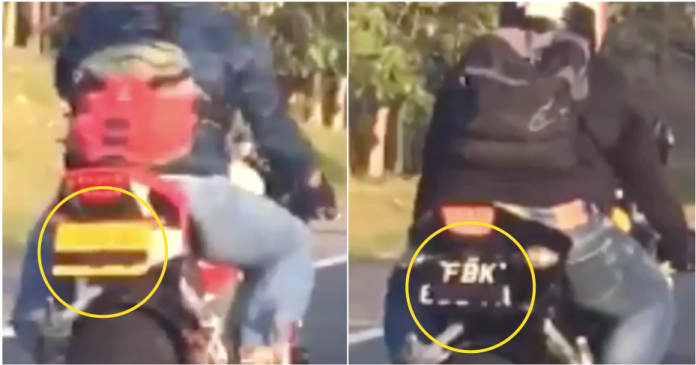 A car’s dashcam recently caught a number of Singaporean motorcycles with taped up number plates on the PLUS North-South Highway. ROADS.sg’s shared the video on their Facebook page and has now gone viral.

The footage showed a large Singaporean motorcycle convoy moving along smartly on the left lane and allowing vehicles to pass on the right. That’s good commendable convoy and road etiquette. The car occupants were initially in awe of the big bikes, but they soon started to talk excitedly when they spotted a number of bikes with tape over the rear number plates. Check out the video below (video credit “Amy” and ROAD.sg Facebook page).

So, why did they ride with covered plates? Did part of the plate fall off? Or because of the AES/AWAS/police radar cameras? The biggest suspicion points to avoid their number plates being captured when speeding to avoid fines.

We always take a neutral stand in such matters. There are always the good, the bad and the ugly among any country’s people. So, let’s be responsible and pay up our fines in Singapore. On the other hand, if there are any Singaporean riders reading this, please tell your friends to remove the tape on their number plates. They risk a bigger fine or even having their motorcycles confiscated if caught by the Malaysian authorities.