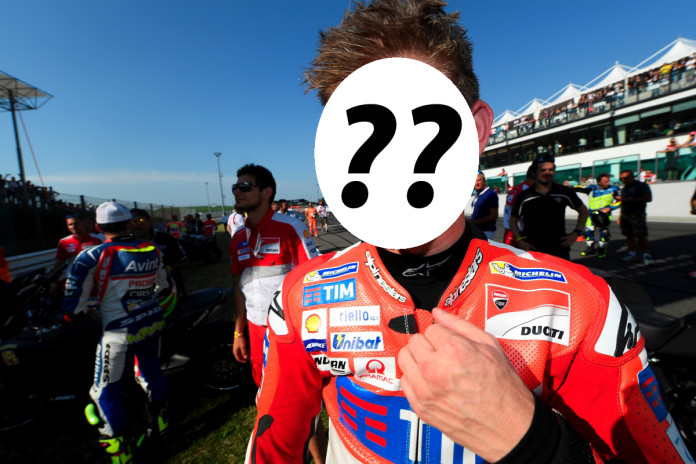 A look into the illustrious career of perhaps the greatest Ducati race rider ever.

Yesterday, we featured Ducati’s greatest MotoGP race machine – the Ducati Desmosedici GP7. In this part of our week-long Ducati special, we now take a look at the machine’s pilot.

In Ducati’s hall of fame, he stands as the brand’s greatest race rider ever in its modern Grand Prix racing history. The man in question is none other than Australian prodigy Casey Stoner. Here’s how he got to be the scarlet Italian marque’s most revered hero of recent times.

Early Beginnings
Born in Southport, Queensland, Australia in 1985, Casey Stoner began racing at the tender age of just 4 years old. The Australian prodigy honed his race craft in the highly competitive flat track dirt ovals all over Australia, collecting no less than 70 state-level championship trophies plus 41 dirt and long track titles by the time he was 14 years old.

Being legally old enough to compete in road racing at 14, Stoner and his family then made the landmark decision to literally sell everything they had in Australia, using the money raised towards their relocation to England. After which Stoner got his first taste of 125cc GP bikes in the national British championship, competing in it between 2000 and 2002 with some success.

The world stage
Stoner finally graduated into the world 125cc championship in 2003 where he signed on with Aprilia initially before switching to KTM in 2004.

In total, Stoner scored 2 race wins plus 8 podium finishes before graduating up into the world 250cc championship in 2005.

Astride an Aprilia machine, Casey Stoner enjoyed more success in the intermediate class, scoring five race wins plus five podium finishes in a season. Stoner was then recruited into the premier MotoGP class in 2006 where he rode for the satellite LCR-Honda team.

As a rookie, Stoner showed strong potential astride the satellite Honda GP machine, scoring his season’s best finish by taking second place in Turkey. Despite several crashes throughout the season, Stoner caught the attention of the resurgent factory Ducati outfit and joined the team from 2007 onwards.

2007 – Championship year with Ducati
Only when he arrived in the famed scarlet-liveried Italian team did the Australian prodigy charted his greatest success.

Despite being in his second year in MotoGP and his first with the storied Ducati team, Stoner’s debut season with Ducati was nothing short of magical to say the least. 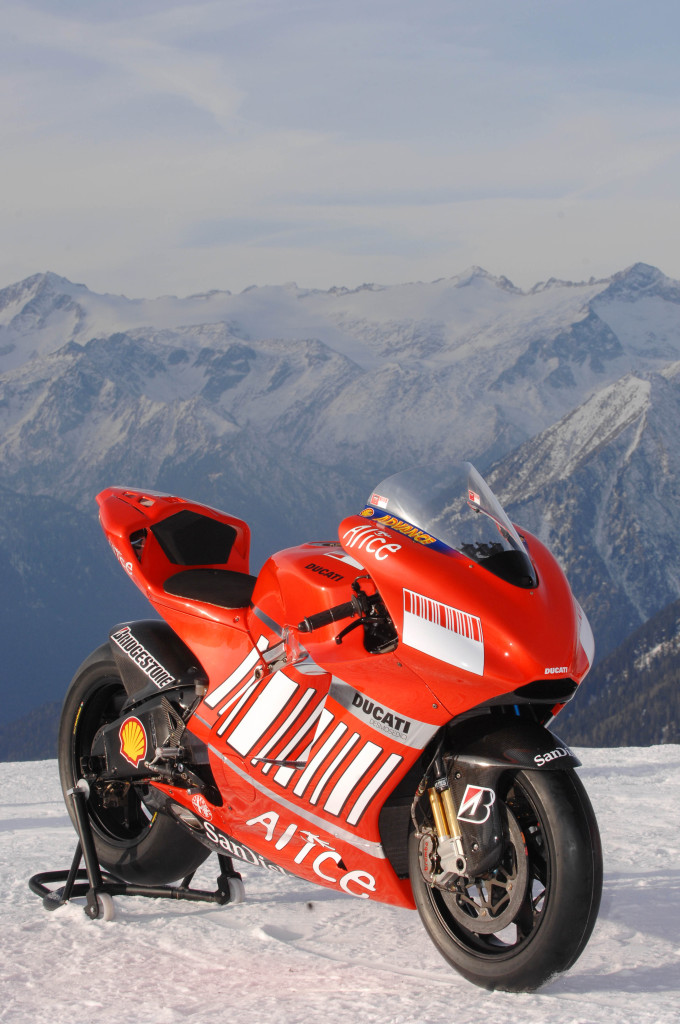 At the time, the Ducati Desmosedici GP7 showed tremendous potential despite being rather tricky to handle in the corners. Unlike his more experienced Italian teammate Loris Capirossi, Stoner, who was just 21 years old at the time, showed his impressive skills when pushing the Ducati GP7 machine to its limits. 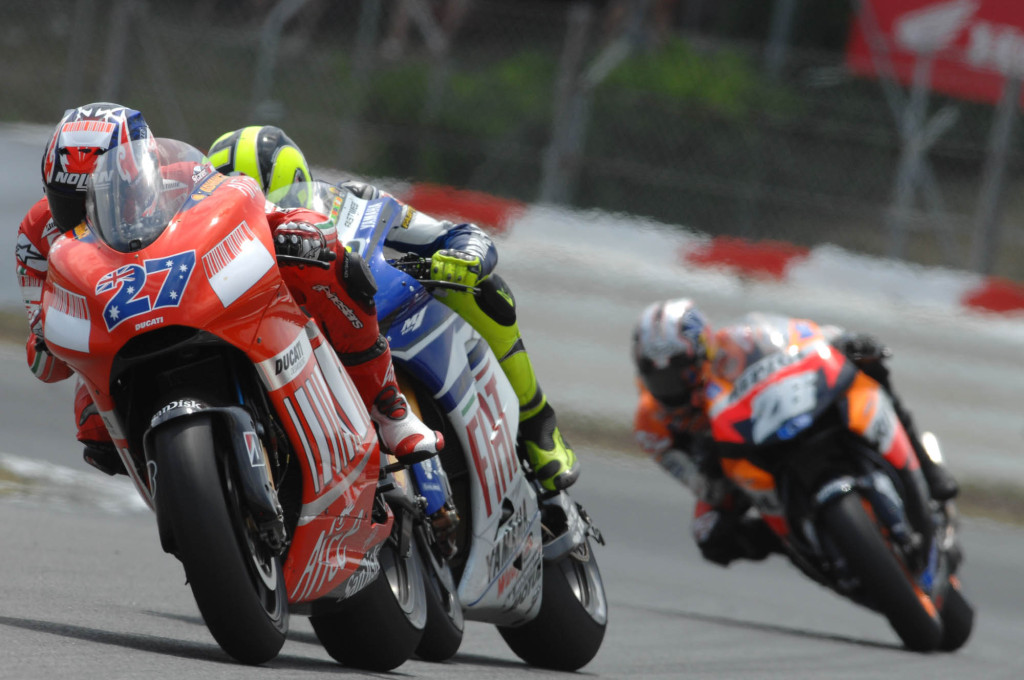 With his unique riding style, Stoner was able to tame the wild Desmosedici GP7’s high-output motor brilliantly and capitalised on the performance of the Bridgestone tyres it came with at the time. As the 2007 season opened in Qatar, Stoner’s speed and pace astride the GP7 proved unbeatable to say the least. 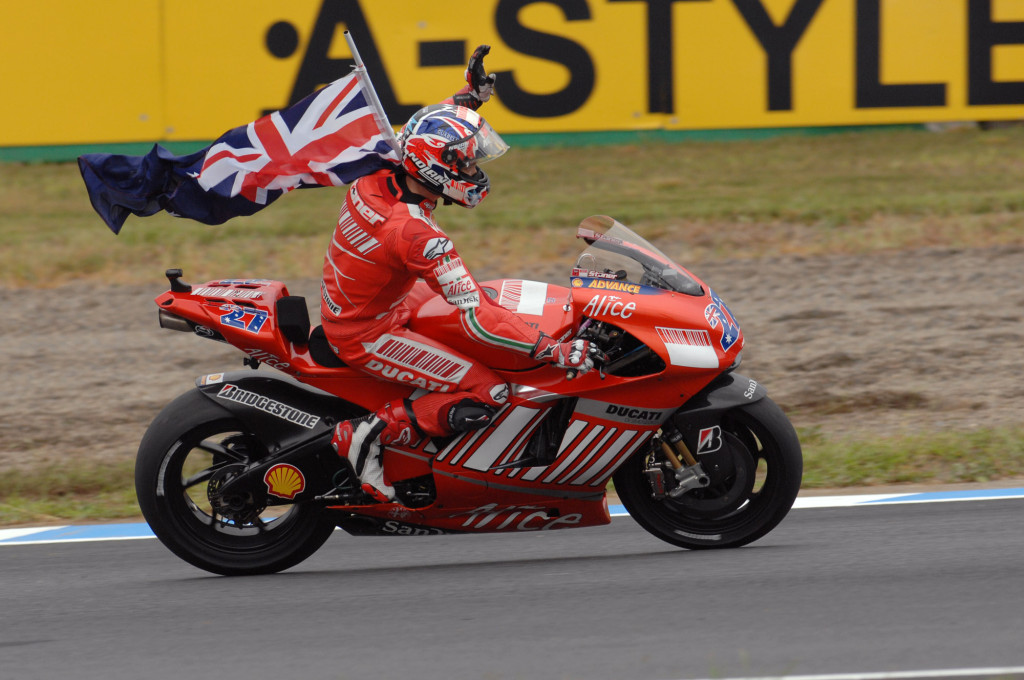 Stoner charted 10 race wins in total plus four pole position starts – Mugello Laguna Seca, Brno and Misano. Stoner’s impressive run in 2007 saw him finishing all 18 races no lower than sixth place. He would later be crowned as the 2007 MotoGP riders champion in the 2007 Japanese GP where he finished sixth. 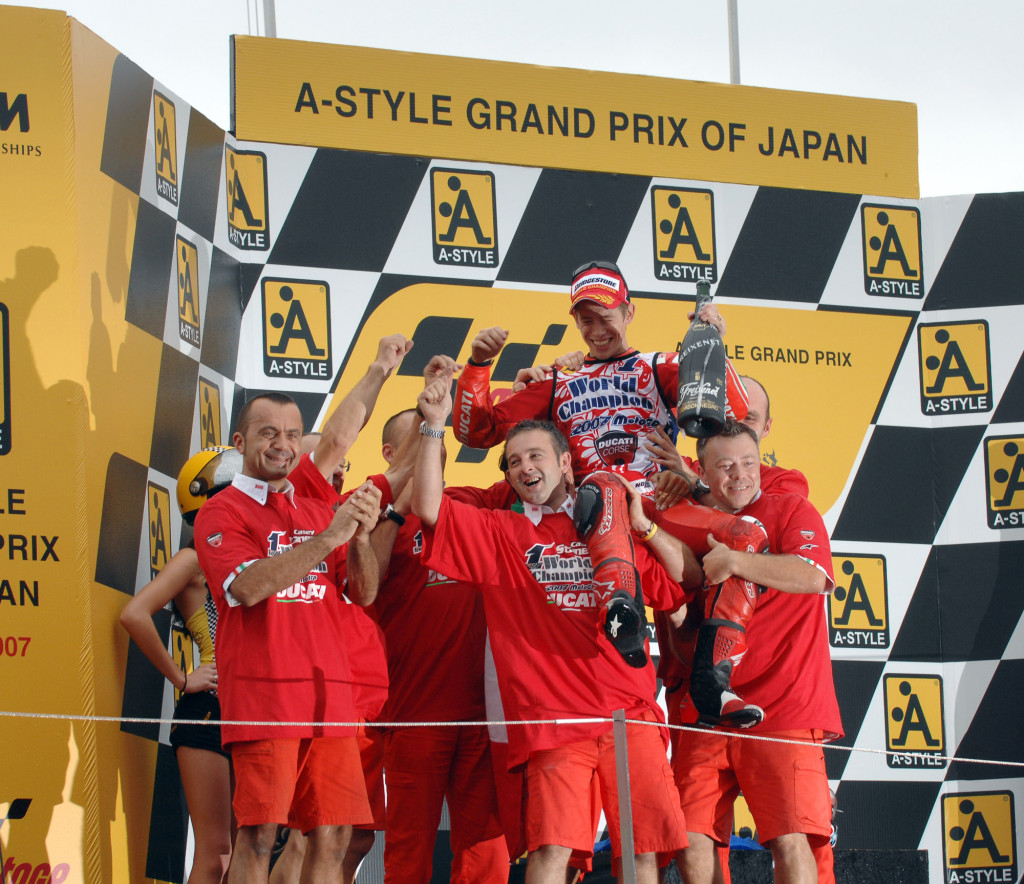 The feat saw the then 21-year-old Australian becoming the second youngest ever MotoGP champion at the time. More importantly, he stood as Ducati’s first and only title-winning rider in its history. He’s also the first rider to win a title for an Italian team following Phil Read’s title achievement for MV Agusta in 1974.

Later years, departure and retirement
Despite ending the following 2008 season as the vice champion, a number of factors led to his exit from the Italian team at the end of 2010. Chief amongst which was the decreasing competitiveness of Ducati’s GP machines that succeeded the Desmosedici GP7.

Although the Desmosedici GP8 showed some strong potential in 2008, rivalling Japanese factory teams had already closed the technical gap against Ducati by then, leading to the irreversible decline in performance of Ducati GP machines. Stoner stayed with Ducati until 2010 and joined the factory Honda team in 2011.

2016 – Return to Ducati
Even in retirement, the urge to be back on a MotoGP missile proved hard to resist for Casey Stoner. What didn’t help was Honda’s odd move at limiting his involvement during official test sessions too. 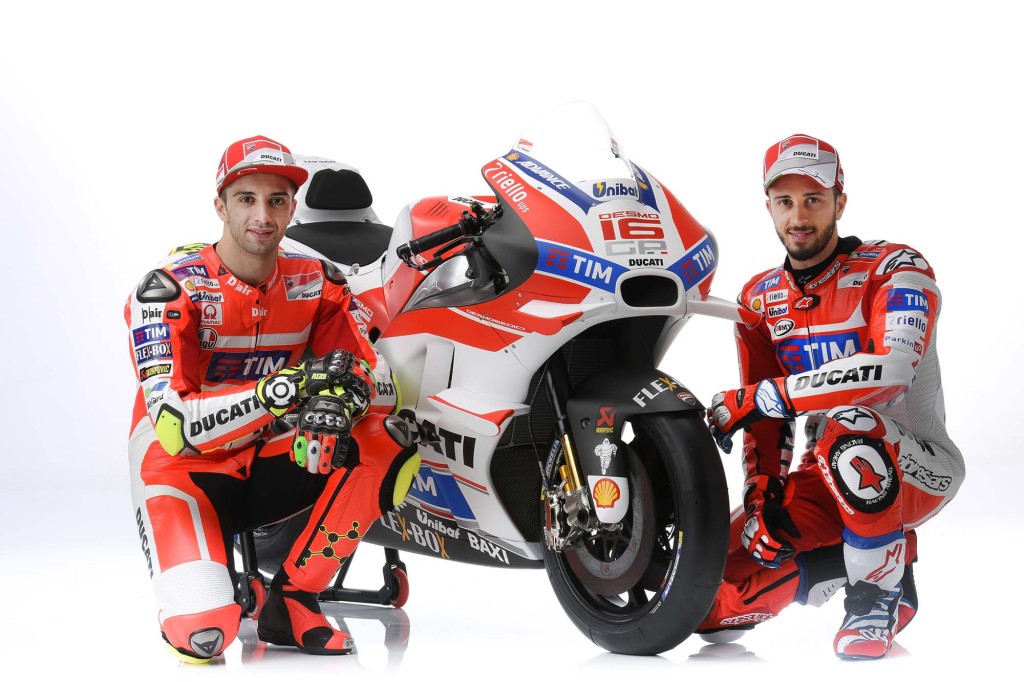 Ducati’s re-engagement with Casey saw him playing a hugely active testing role, aiding Dall’Igna towards developing the winged behemoth that is the Ducati Desmosedici GP16. 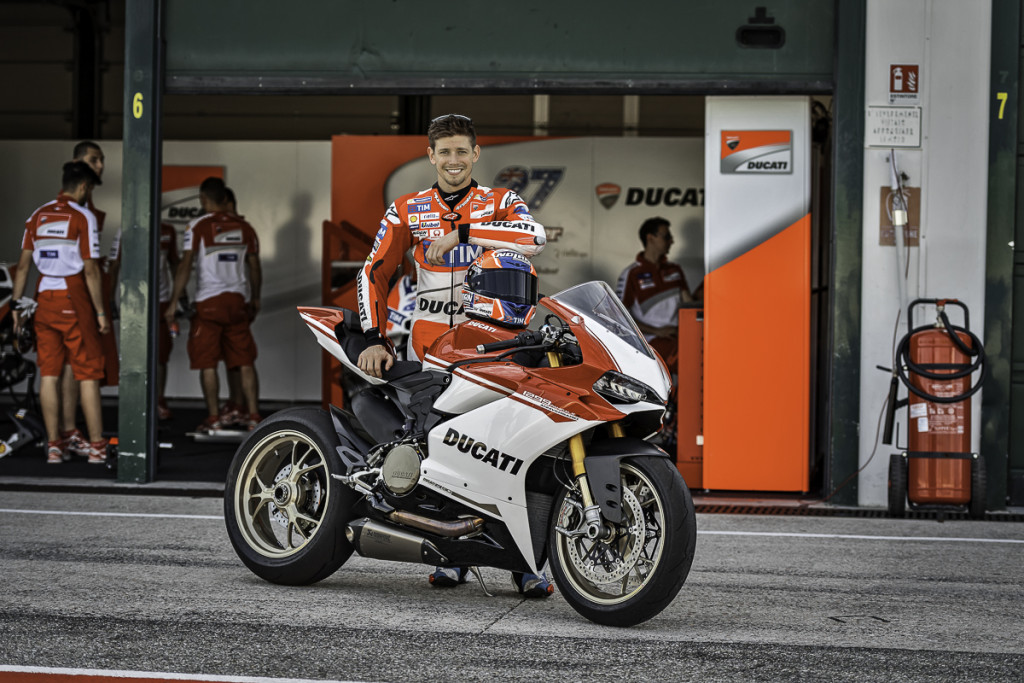 Ducati last scored a MotoGP race win in Phillip Island back in 2010 thanks to Stoner. With its last champion back on board, albeit as a test rider only, perhaps the Italian team would return back to its winning ways in time.