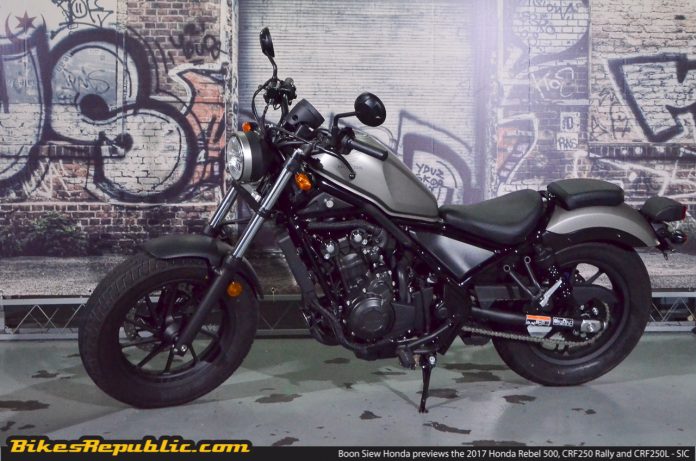 The new additions were previewed together with a number of reworked models like the NSS300 scooter, CBR250R, the 500cc and 650 ranges.

The three new bikes will be available sometime in August somewhere between the RM25,000 to RM35,000 price range. 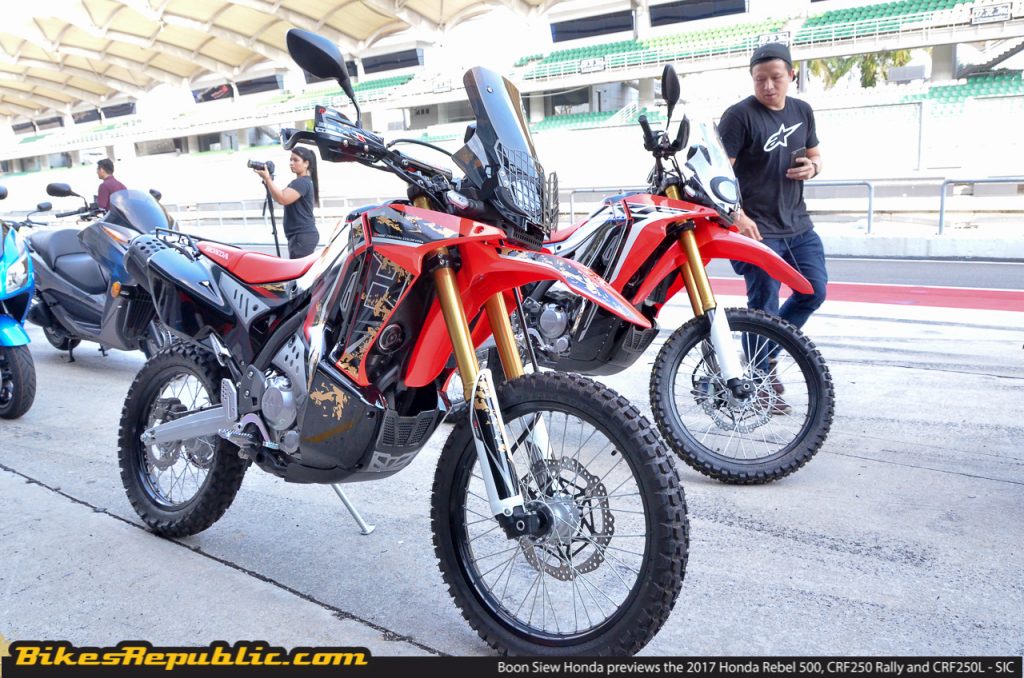 During yesterday’s media breaking of fast event held at the Sepang International Circuit (SIC), Boon Siew Honda (BSH) gave the media members a sneak preview on their upcoming new models for 2017. Together with a number of face-lifted models, BSH organised a quick track session with all of the new bikes prior to the breaking of fast which includes the new 2017 Honda Rebel 500, CRF250L and CRF250 Rally. 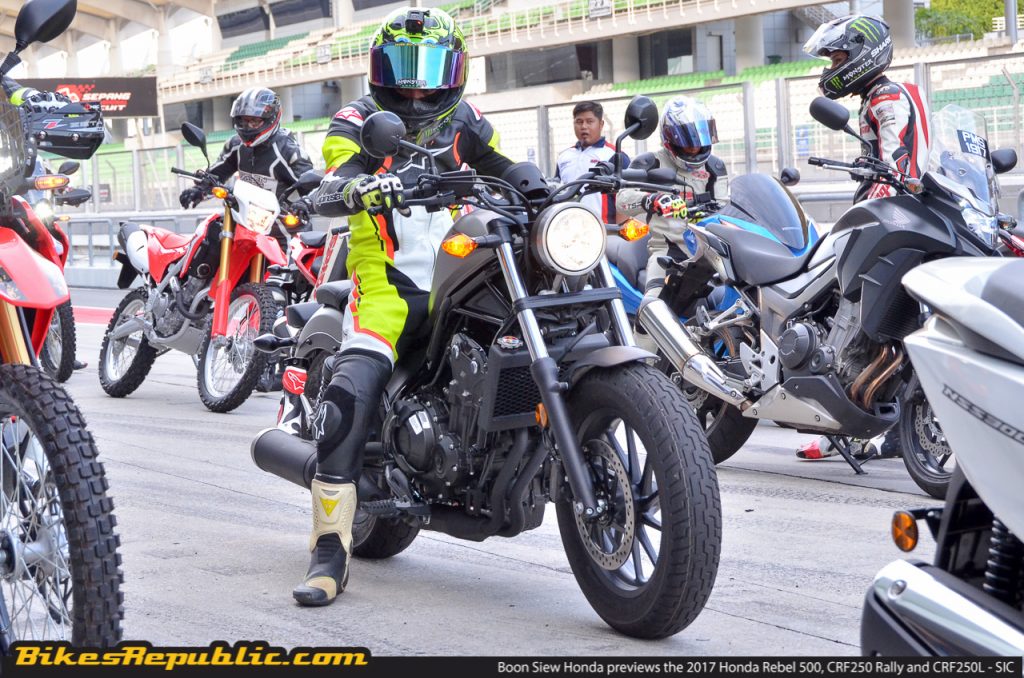 Launched at the end of last year, the Rebel 500 represents the latest addition to Honda’s ‘lifestyle’ range with their latest model. Designed to penetrate the middleweight cruiser market, the Rebel represents a few things about cruisers that most of us are excited about; attractiveness, affordability and reliability. 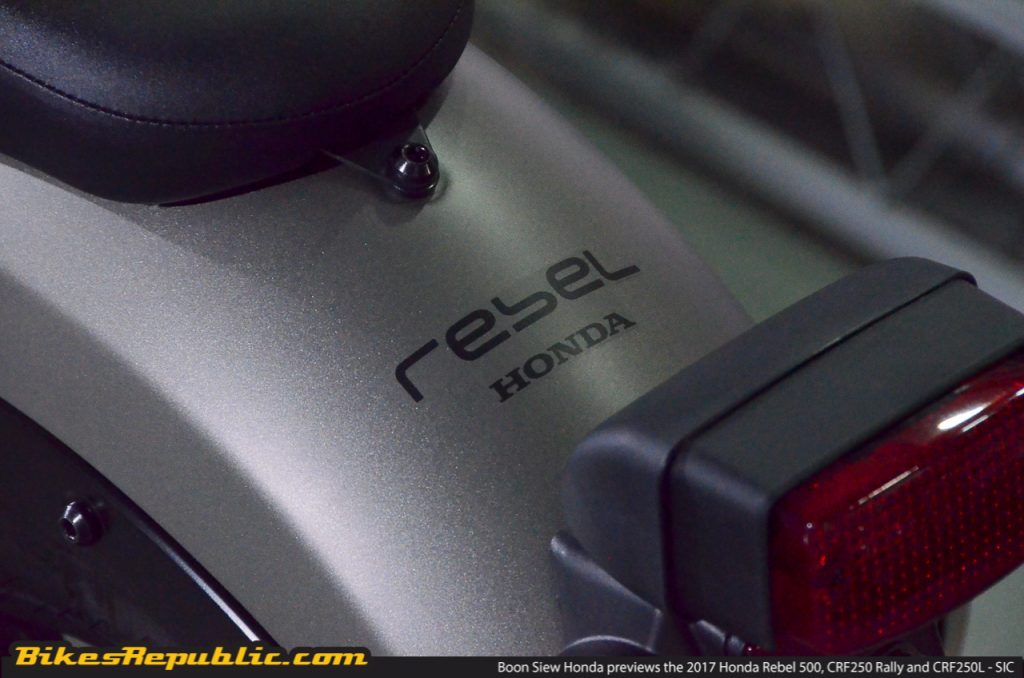 CLICK HERE to read more on the Rebel 500 (and also its younger sibling, the Rebel 300). 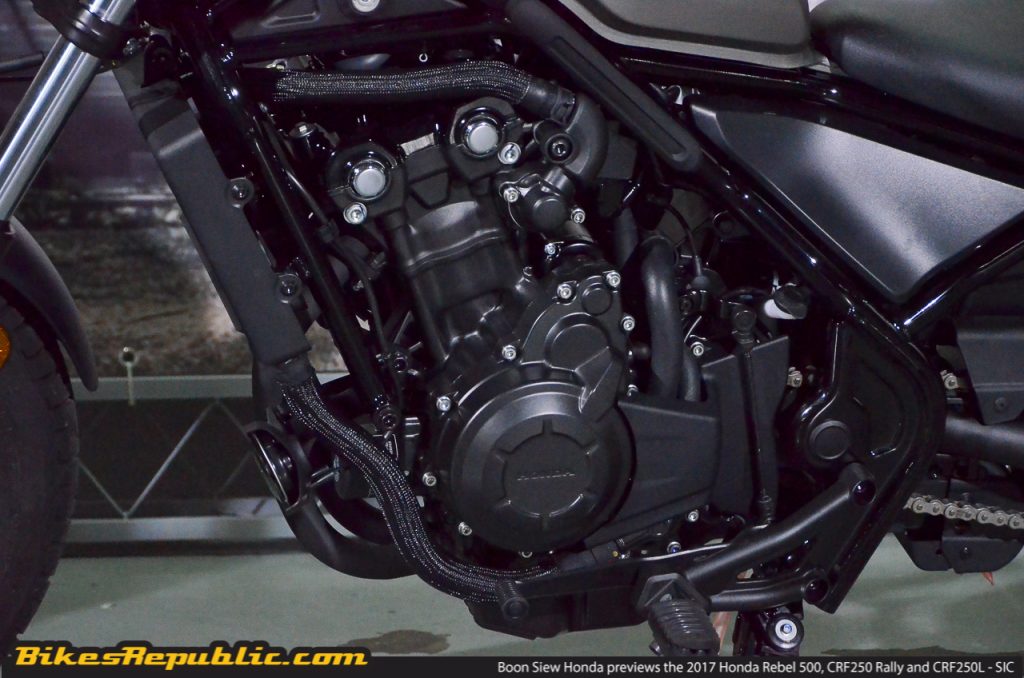 The Bobber-like Honda is all about style and functionality that is based on its sporty brother, the CBR500R. Powered by the same 471cc, liquid-cooled parallel engine, the Rebel 500 has been re-tuned to produce 45.6hp at 8,500rpm and 43.2Nm of torque when it hits 7,000rpm. Transferring all that power and torque down to the rear wheel is assisted by a six-speed transmission. 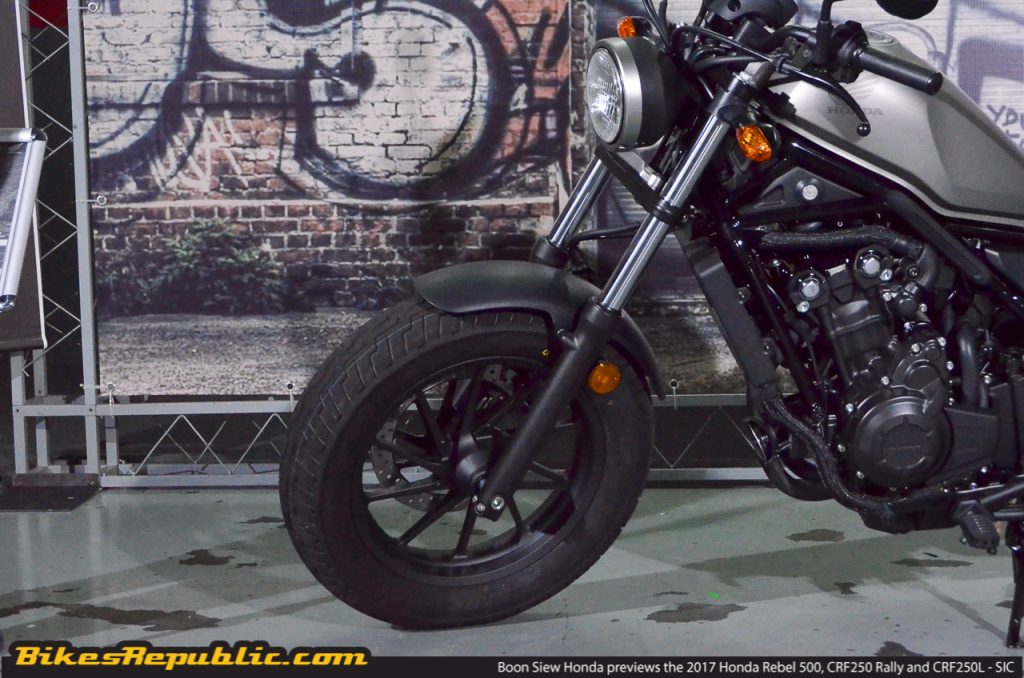 It is also rumoured that the Rebel 500 middleweight cruiser will be available in the Malaysian market as early as August with an enticing price tag of around the RM35,000 mark. We sure can’t wait for this particular machine to arrive. 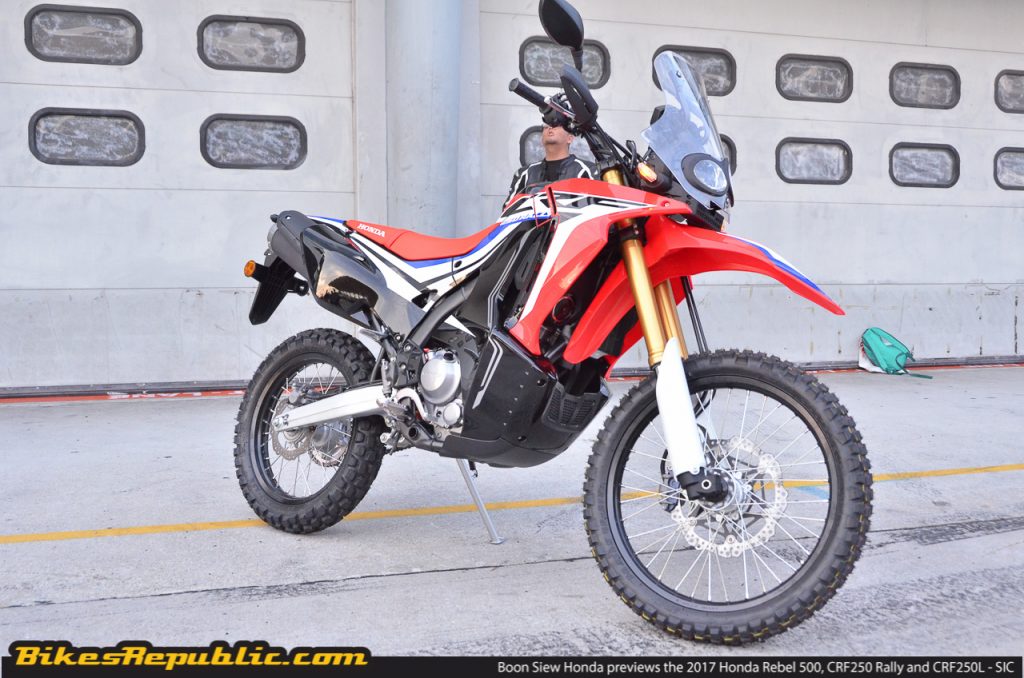 The concept of the Honda CRF250 Rally was initially introduced at the end of 2015 and now, the real thing will be available in the Malaysian market very, very soon. The enduro or dual-purpose bike from BSH is all about conquering all sorts of terrains at affordable yet exciting package. 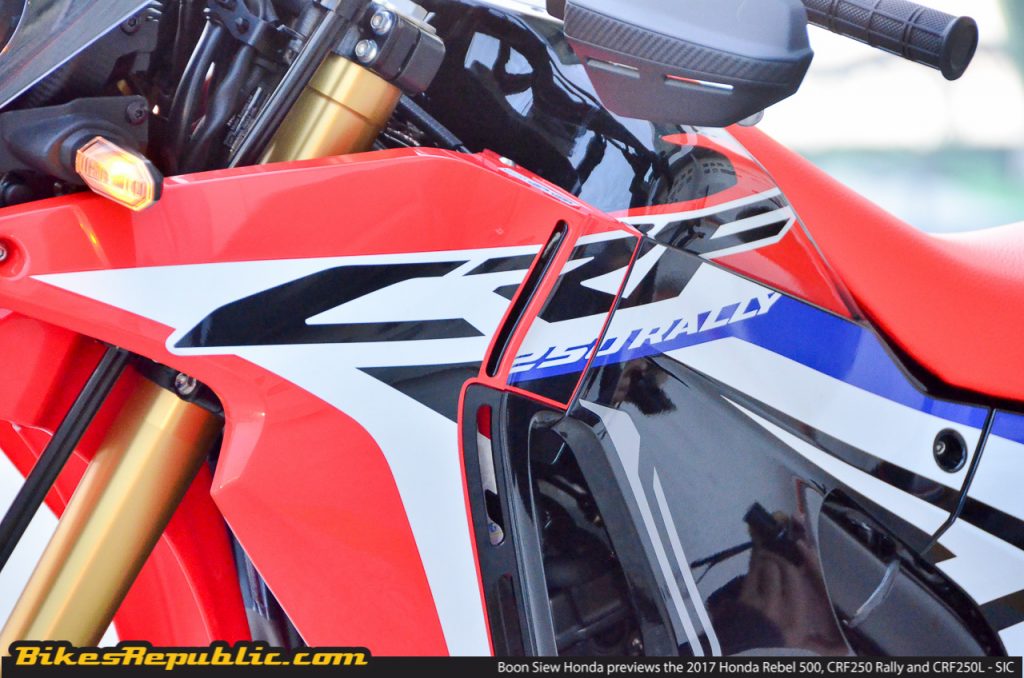 Apart from its Dakar-inspired rally-cross race machines, the CRF250 Rally is equipped with a 250cc liquid-cooled DOHC single-cylinder engine generates around 24.4hp at 8,500rpm and 22.6Nm of linear torque at 6,750rpm. All the power is transferred to the rear wheel via a six-speed manual transmission system. 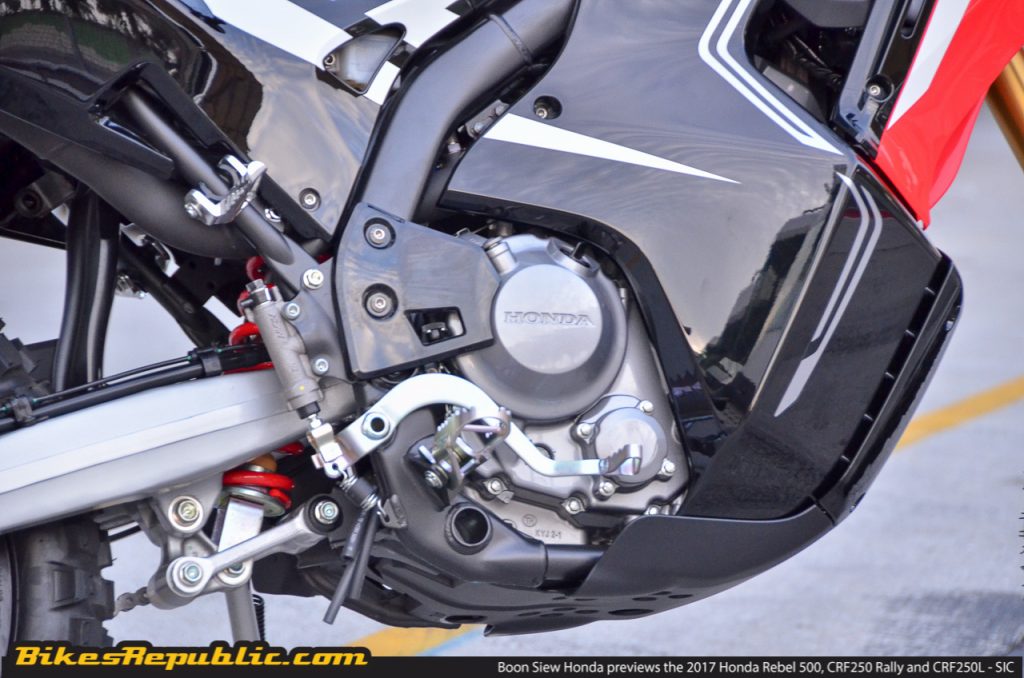 We also heard that it will be available sometime in August and the price is said to be below the RM30,000 mark. This makes the premium 250cc dual-sport bike from BSH an interesting addition indeed. 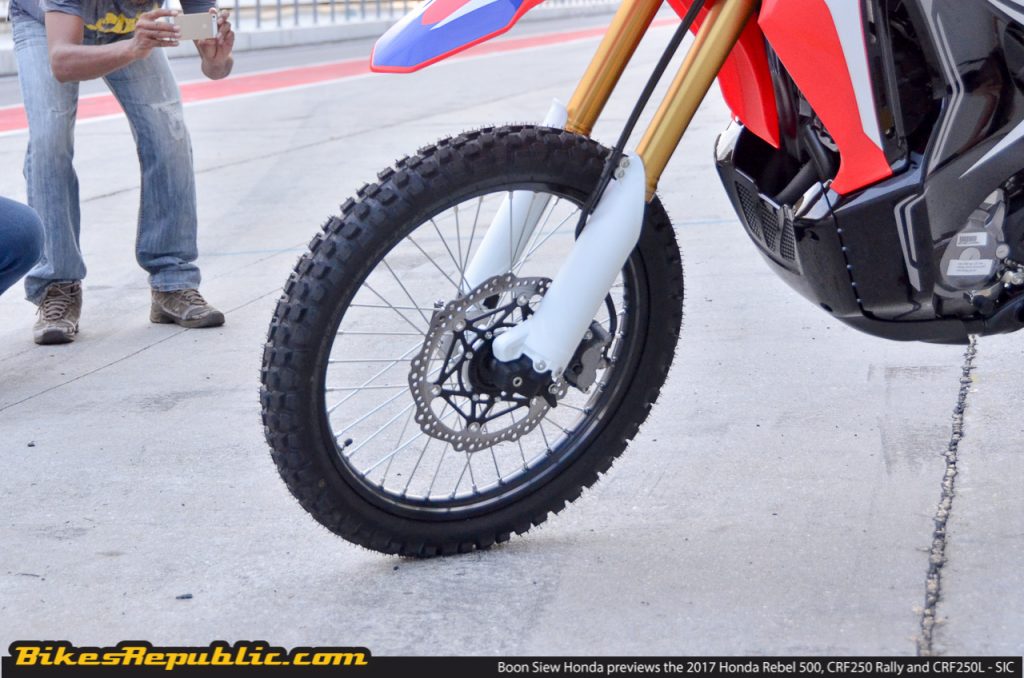 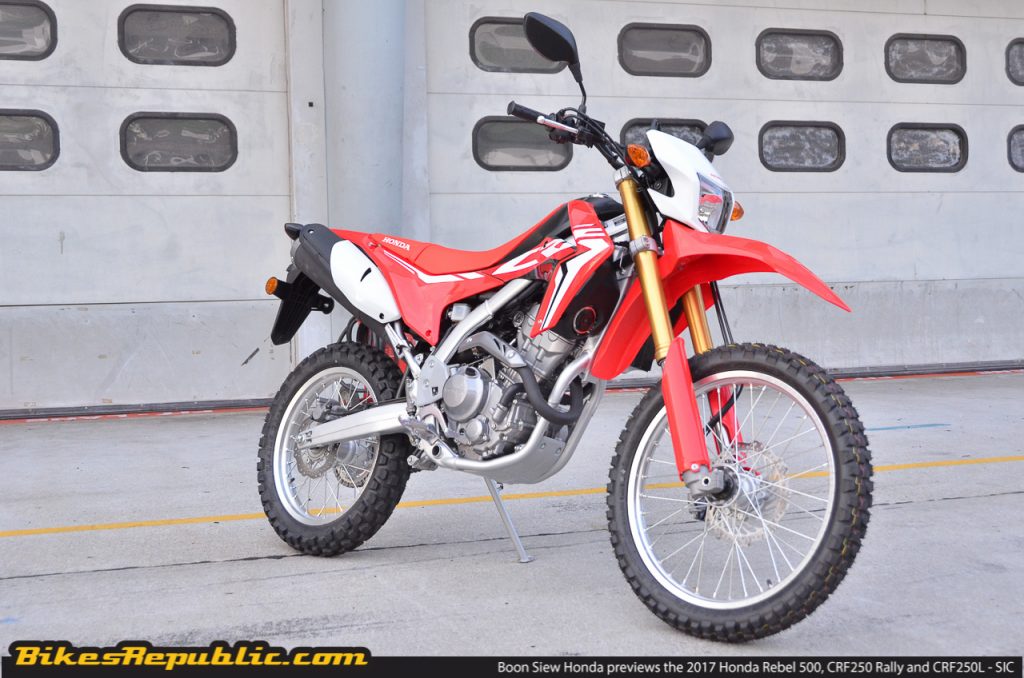 The CRF250L represents a lighter and more nimble version of the Rally which we feel is more suited for some hardcore off-roading as well as tackling more than a few jumps if you’re interested in freestyle motocross. The design is more simplistic reminded us about the good old’ days of scramblers that has both the excitement and sexy appeal. 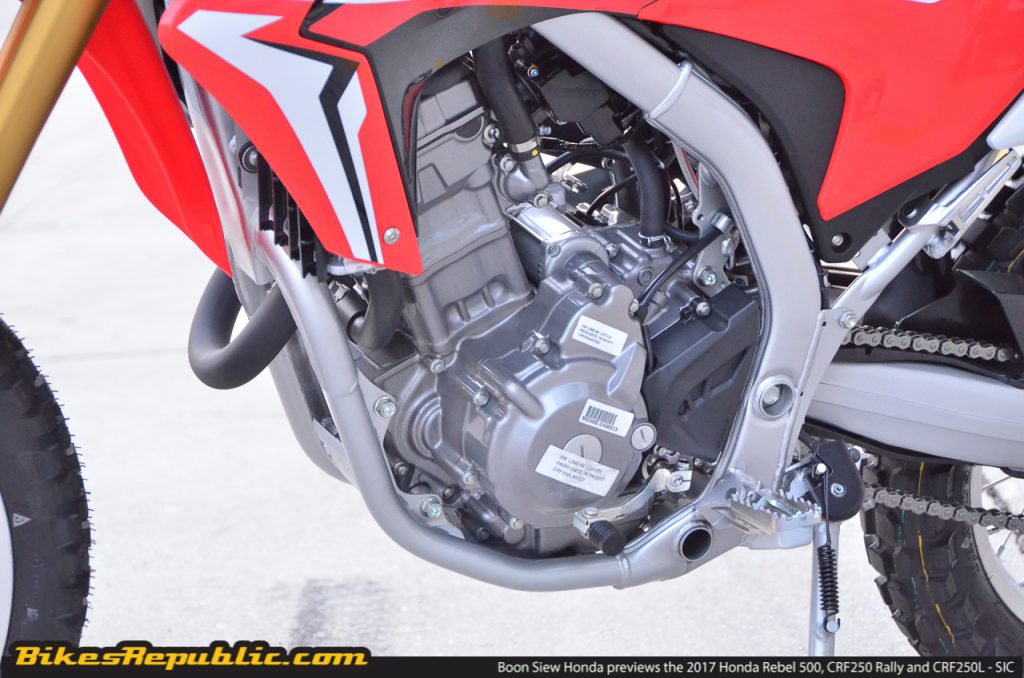 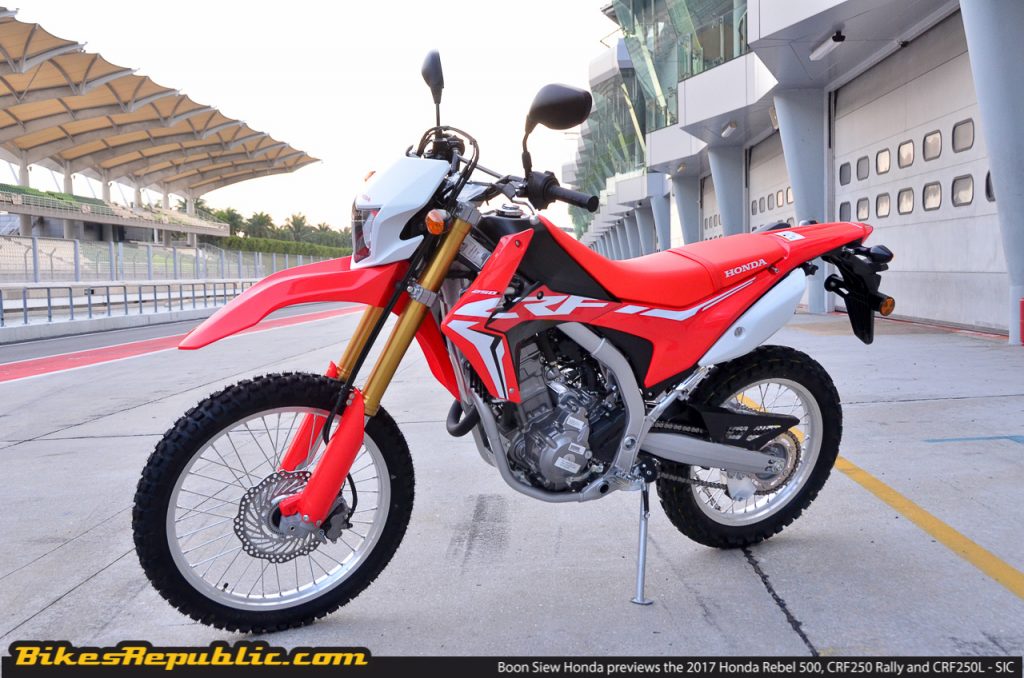 As the 250L looks and feels like a watered down yet equally exciting as the Rally, the price tag will probably be lower as well probably in the RM25,000 range. All of the new bikes from Honda are going to be available sometime in August.