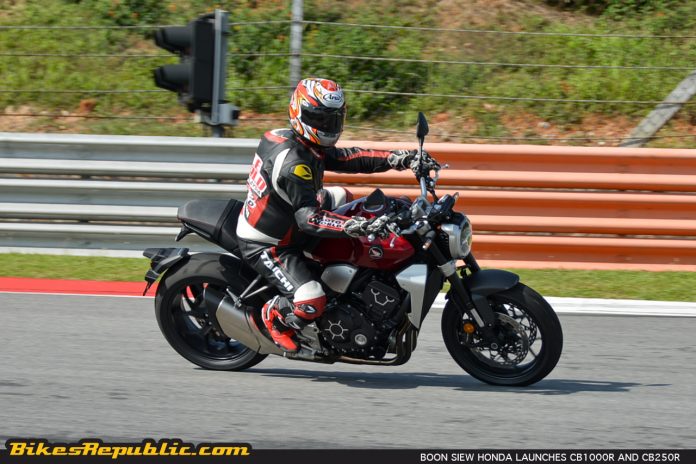 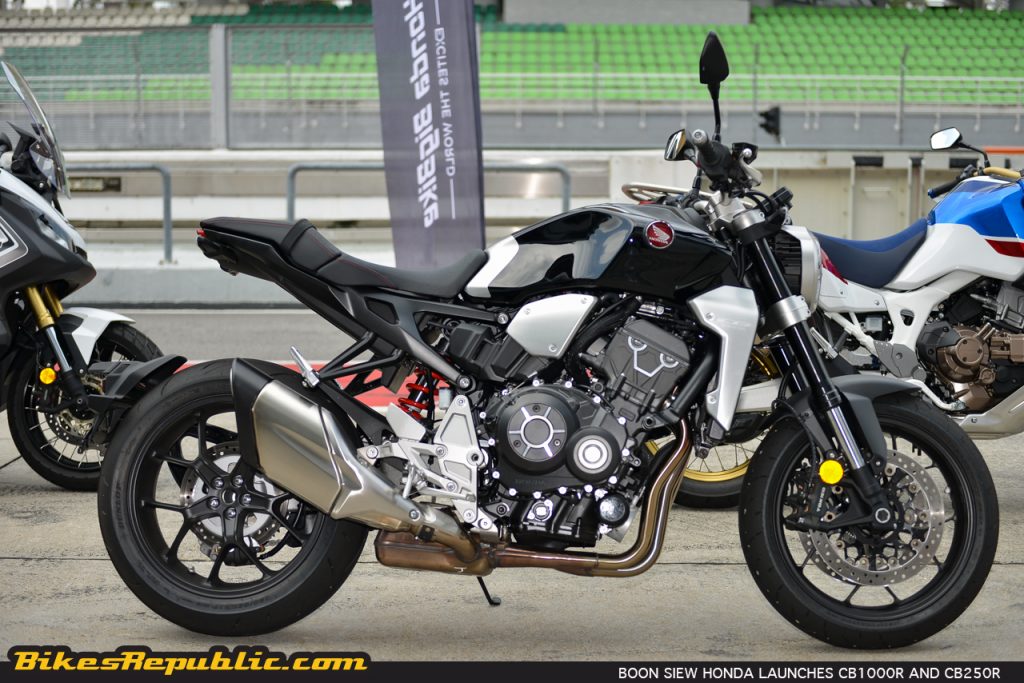 The launch event also served as an occasion for BSH to celebrate Hari Raya Aidilfitri with members of the media. It is a tradition that BSH has observed throughout the years and to spice things up even further, the media was treated to riding the CB1000R, CB250R, X-ADV and CRF1000L Africa Twin at the Sepang International Circuit. 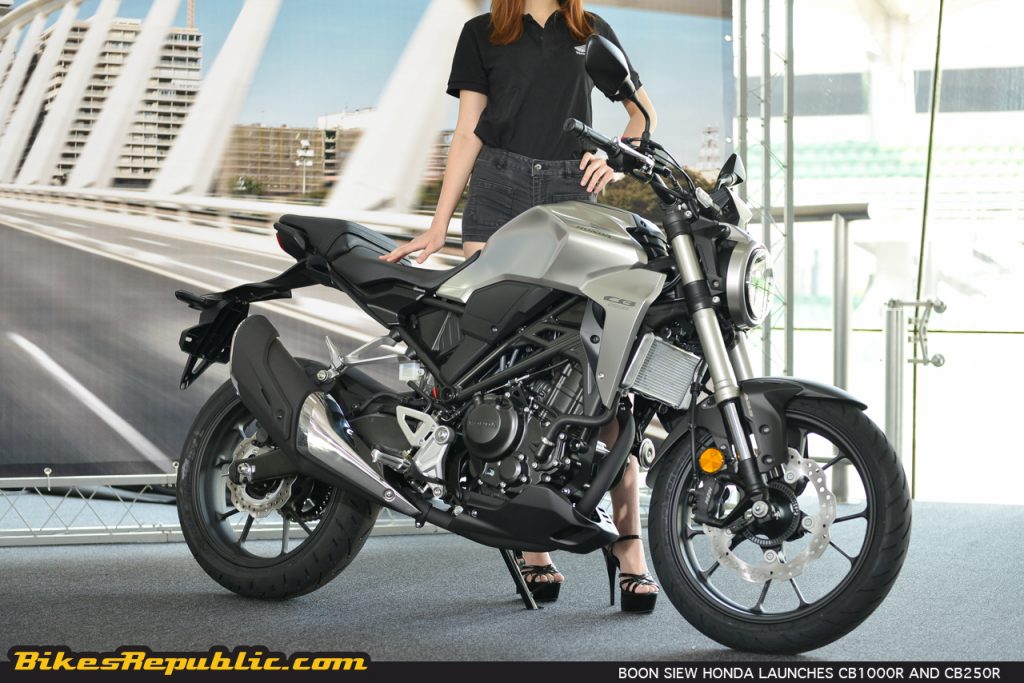 In his speech, Mr. Keiichi Yasuda, Managing Director and Chief Executive Officer of Boon Siew Honda revealed that the company had received overwhelming response for the Africa Twin and X-ADV – which became the catalyst to introduce the Neo Sports Café bikes. 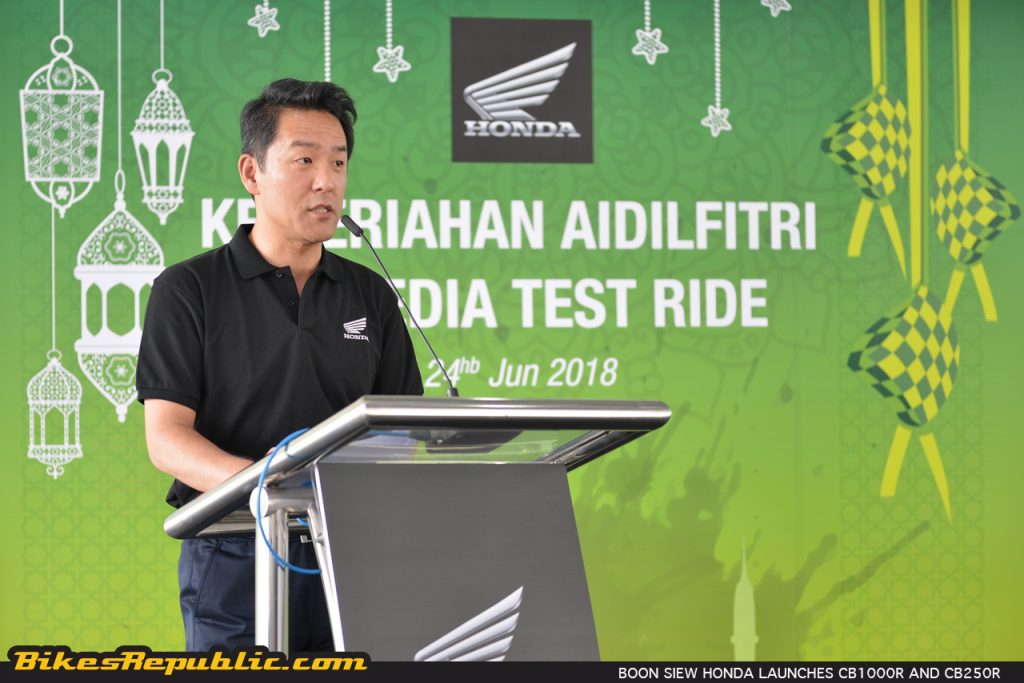 Safety briefings from both BSH’s riding instructor and SIC’s clerk of course followed Mr. Yasuda’s speech and we were then ushered to the paddock downstairs for a short product introduction and briefing. 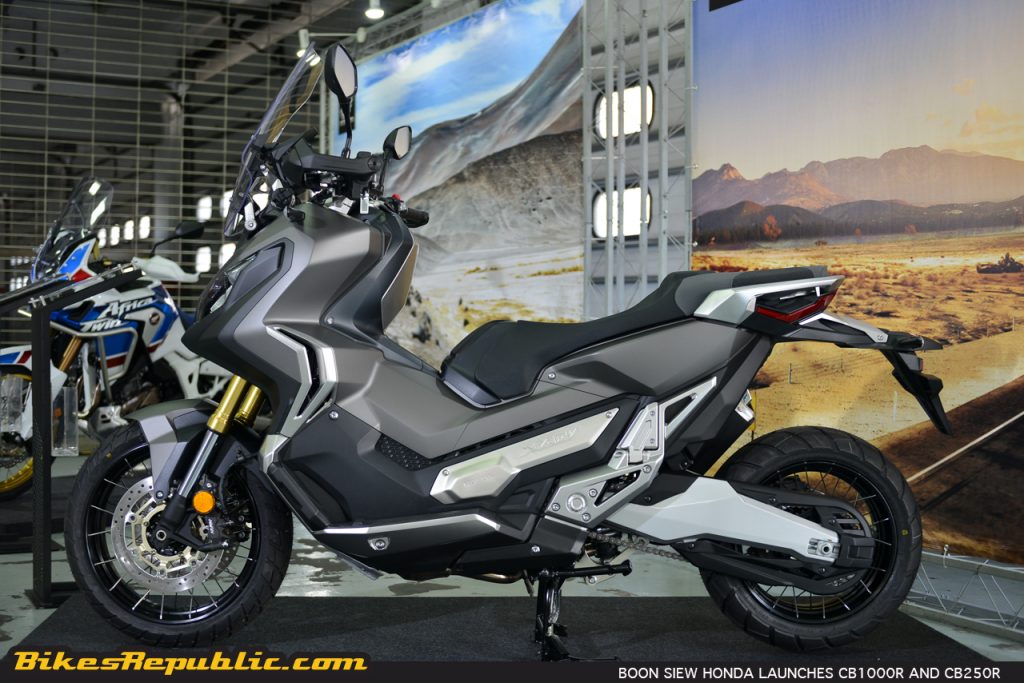 The briefing centred primarily around the Africa Twin and X-ADV as they were both with Honda’s proprietary Dual-Clutch Transmission (DCT). The DCT on both bikes could perform as fully automatic, more “aggressive” SPORT auto and manual by way of push buttons on the left handlebar. 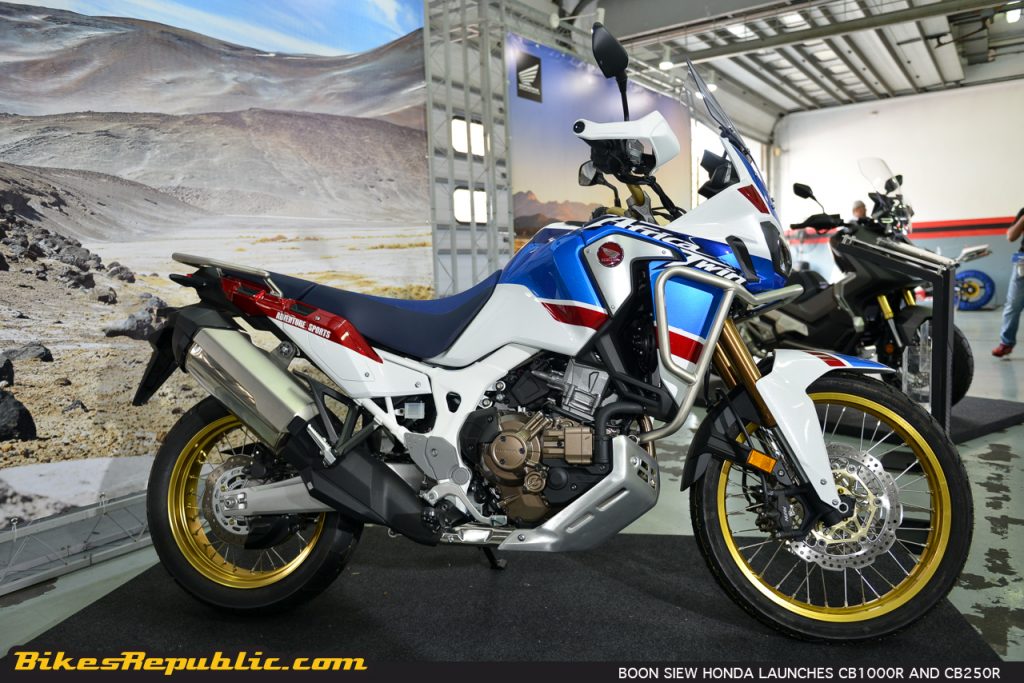 I drew the X-ADV on our first trip out. I had ridden this bike around in Pattaya, Thailand and found it to be superb around the congested city. I left the transmission in “D” (for “DRIVE” as in fully automatic just like in a car) while I concentrated on navigating through heavy traffic and throngs of tourists. 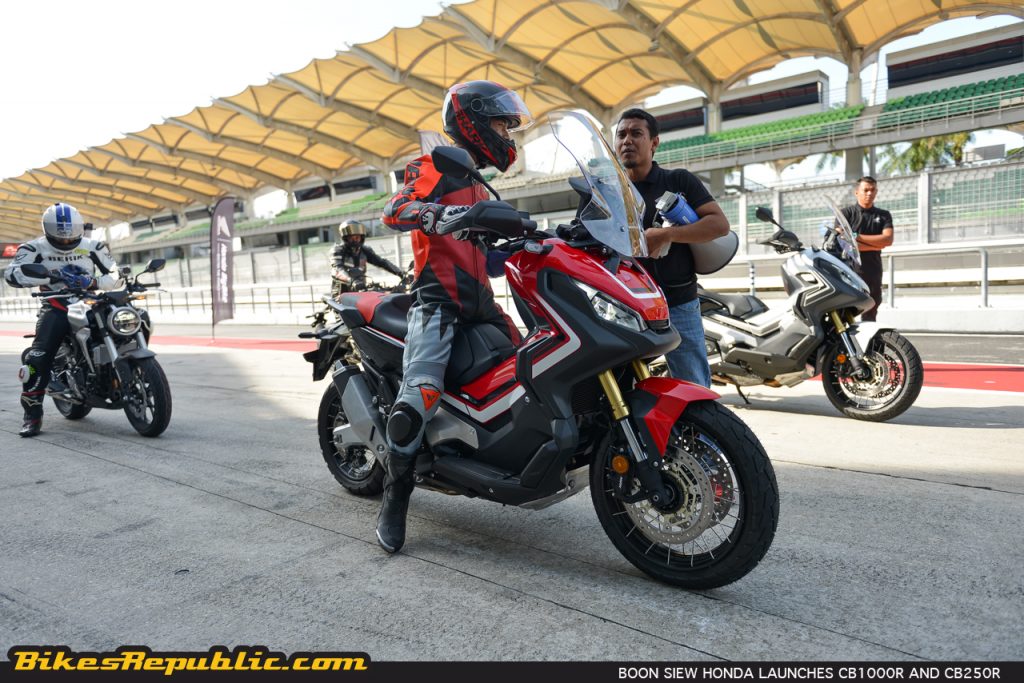 Of course, it looks like scooter with some offroad capability thrown in, but truth is, the X-ADV is a motorcycle of a different concept. It’s a bike that’s meant to go anywhere and does it in seamless fashion. Honda’s copywriting blurb says that it’s “A motorcycle that thinks it’s an SUV.” 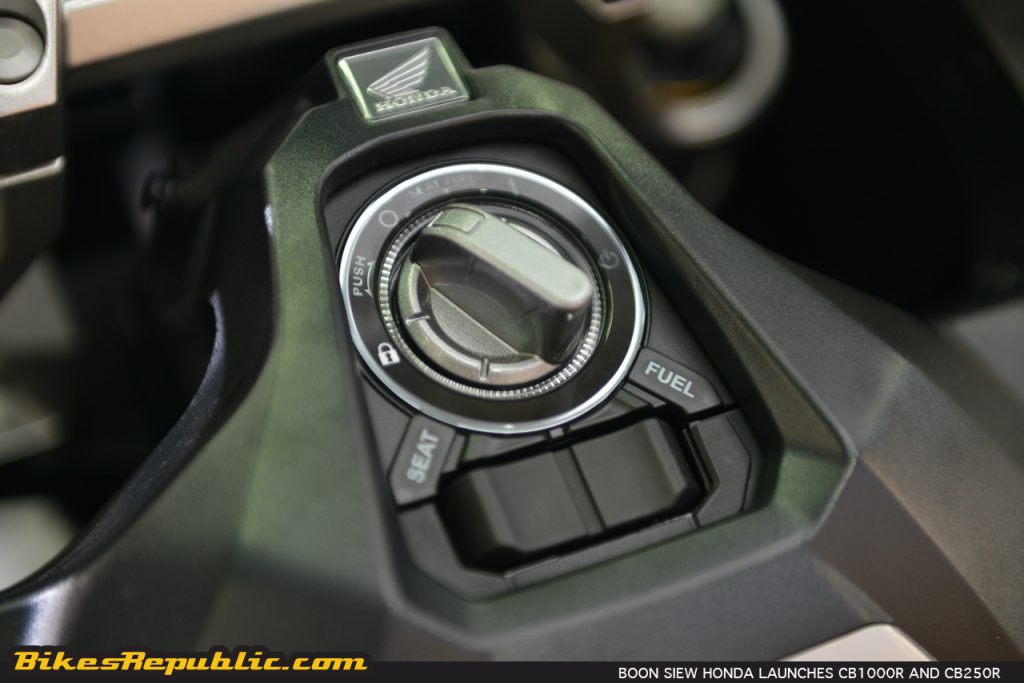 Since we were given only three laps per bike here at SIC, I decided to just keep in “D,” too. Well, it was also because I kept finding the horn button through my race gloves, instead.

Out of the pits and into Turn One, the X-ADV felt strange initially. It turned out that I was trying to trail brake into the corner. 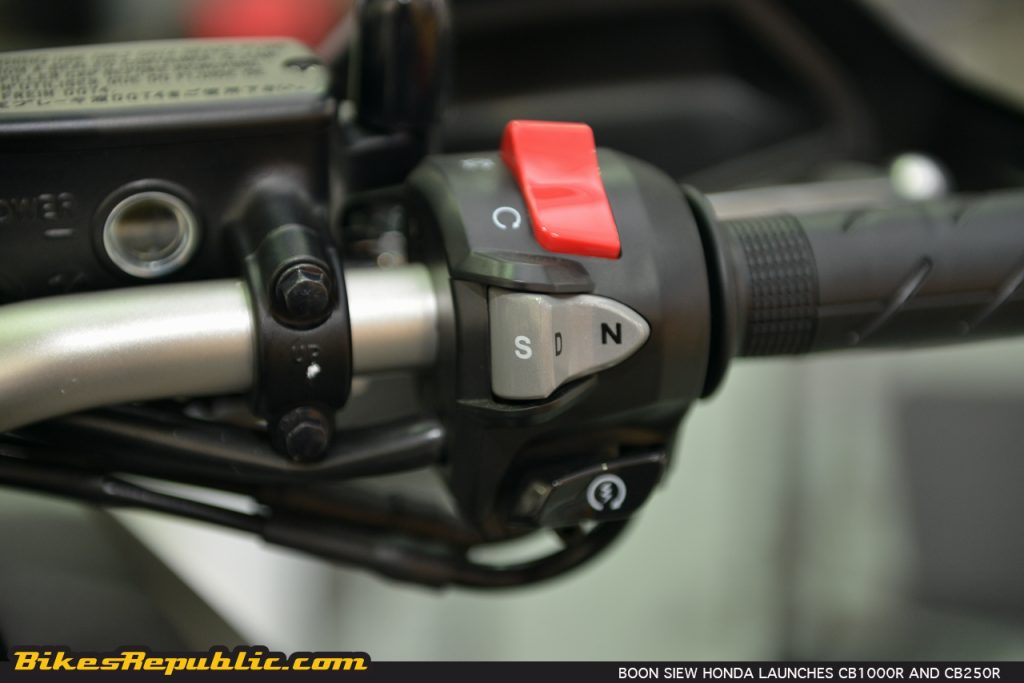 Anyhow, it didn’t take long to learn the bike and I was already speeding into Turn Five with the throttle held open. But when I let of the gas to set up for Turn Six, the transmission downshifted almost imperceptibly, and I had the right amount of power at the exit. 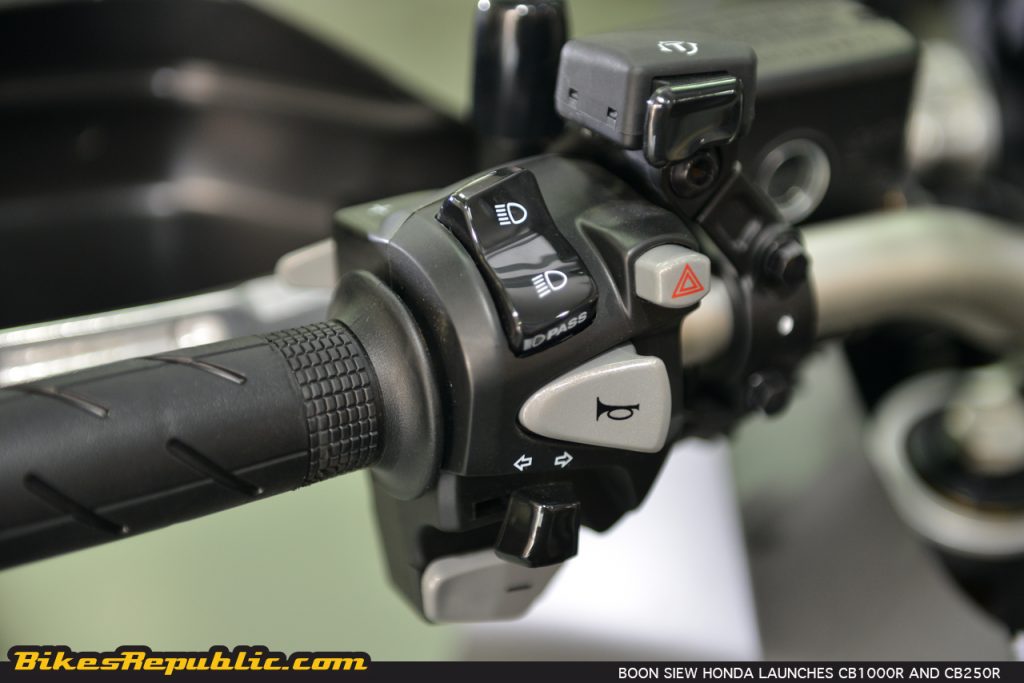 It was just a seamless piece of cloth as I blasted down the front straight (it’s a 750cc bike, by the way). The brakes were superbly strong as I braked for Turn One. It was as easy as that. The X-ADV touched down its centrestand through Turn Two but there was lots of cornering clearance, overall. 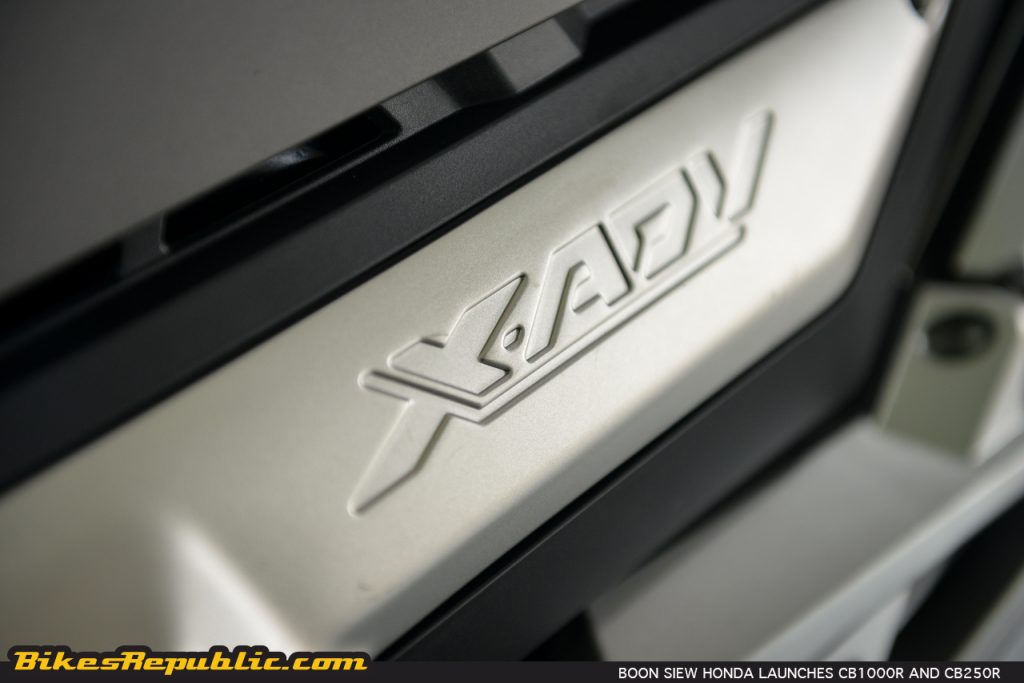 And it’s NOT a scooter!

Just like the X-ADV, I’ve also ridden the ‘Twin before but that one had a “normal” gearbox. The first thing I noticed about this one was the low seat height which took me by surprise.

Then I did a noob thing: I tried to grab the “clutch lever” but it was waaay further than the reach of my fingers. The group was about to leave the pits, so I waved my arms around like one of Caesar’s friends (as in Caesar in Planet of the Apes). The Honda guys ran over and stifled their laughter as they told me, “That’s the parking brake for uphill.” Ooooh-kaaay. 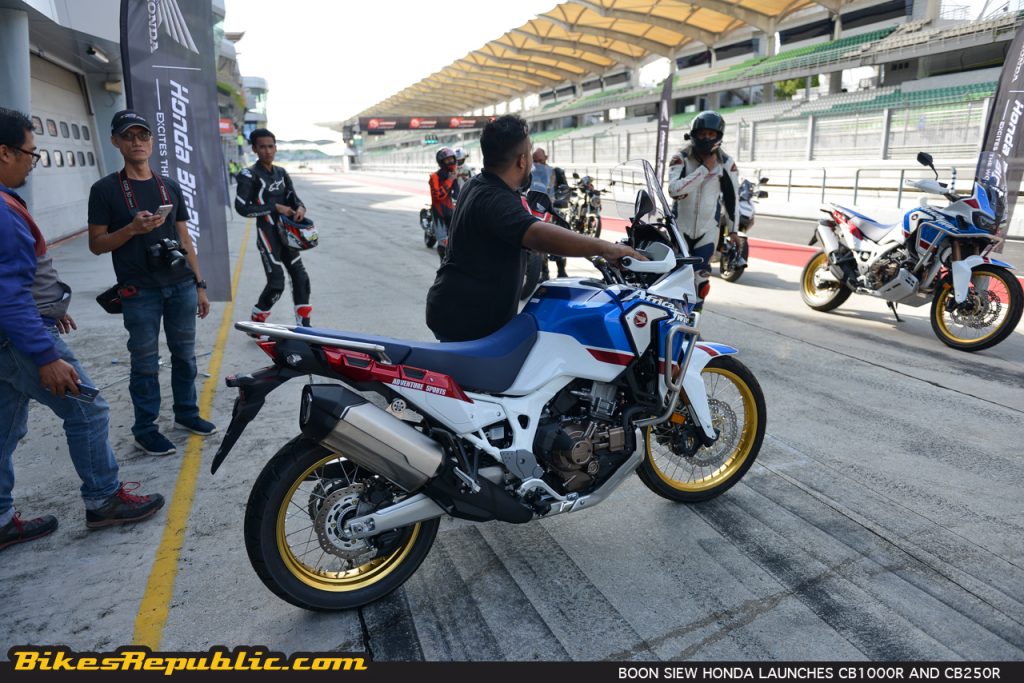 Now, a noob thing #2. I started searching for the gear pedal. The same guy saw it and told me to shift using the up and down buttons on the left switch cluster. I tried dabbing at them with my stiff gloves and found the horn again. So, yes, I decided to leave it in D.

The Africa Twin may have more cc’s than the X-ADV but it got going a lot smoother. The suspension was also much softly damped and I could feel that as I started braking for Turn One. However, while I could feel the rear swingarm moving up and down to cope with the cornering forces, the good news was the bike didn’t wallow like an old KL taxi. 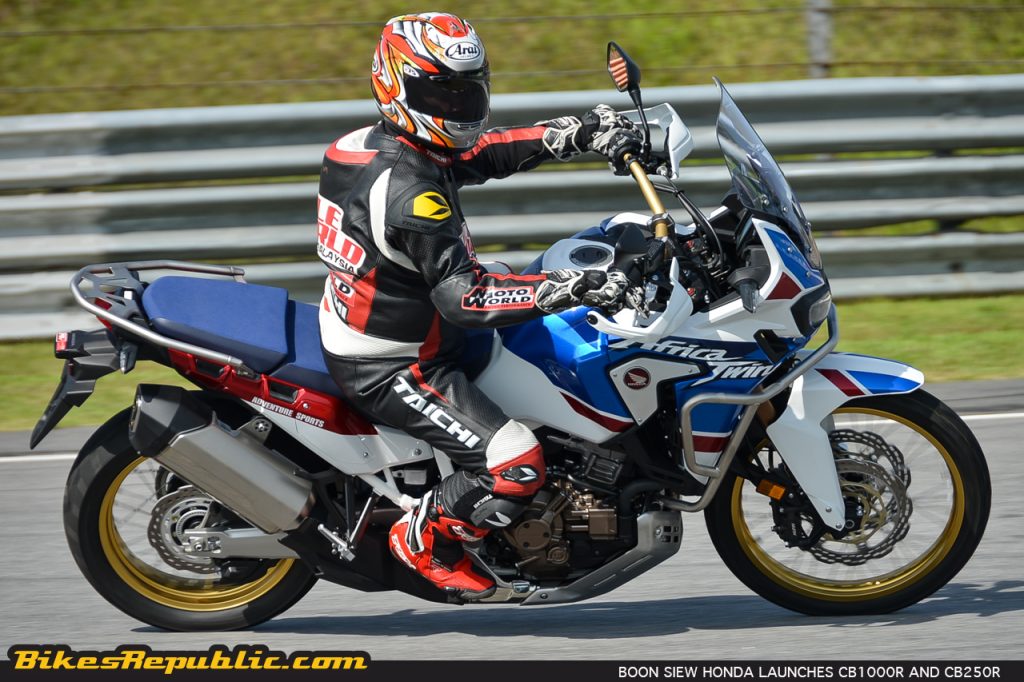 Riding the Africa Twin with DCT was so easy perhaps anyone could do it. Accelerate, brake, turn, repeat.

Through this first experience, I could safety assume that the bike was geared mainly for the dirt, hence the soft suspension. Its power character was also on the softer and smoother side. Not that you couldn’t push it on tarmac, but it kind of defeats the bike’s real mission in life. As for the DCT, it should take the workload off the rider while he concentrates on negotiating the trail.

Please click on the link below for the prices of the X-ADV and Africa Twin.

Now, we’re talking! VROOOM! VROOOOM! Yeah, heh heh. The exhaust note was raunchy enough it could be heard through my Arai and racing earplugs. It’s probably one of the few bikes which the owner doesn’t have to bin the stock exhaust.

The styling was definitely a funky mix of new and old elements, hence Neo Sports. 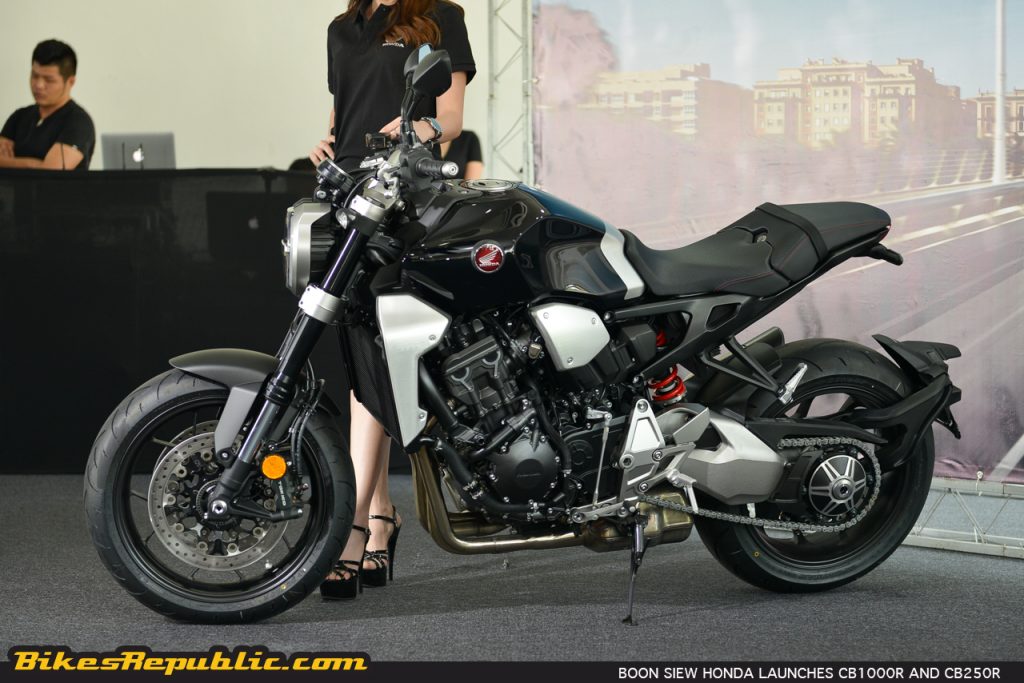 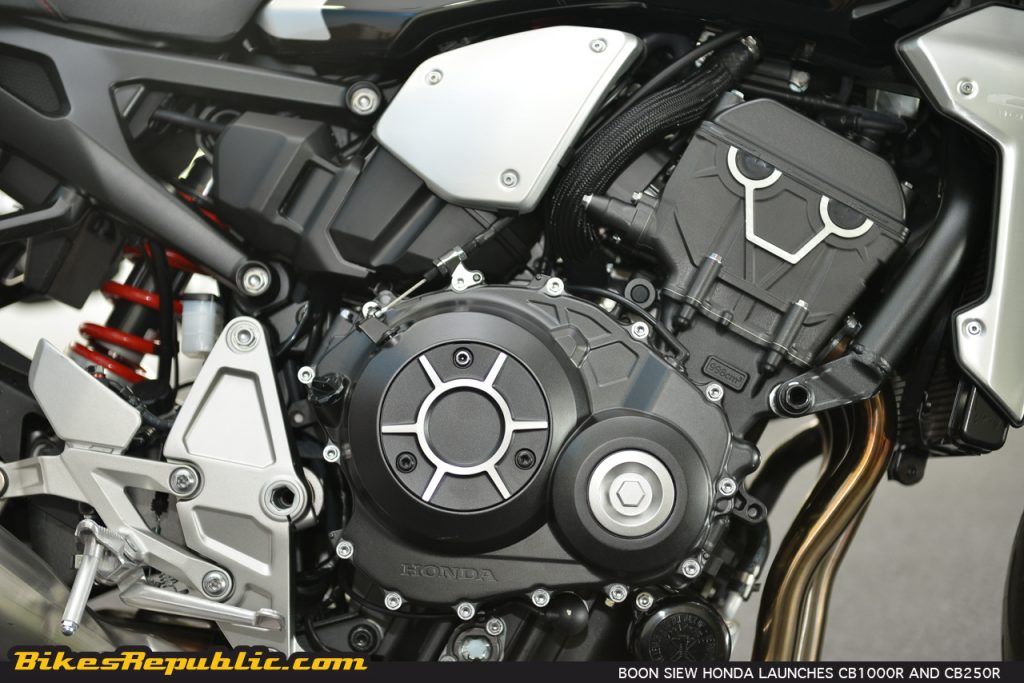 In SPORT mode, the bike charged ahead but it did so very smoothly. Its engine braking was equally as smooth without robbing you of corner rolling speed. The suspension and seat were equally comfortable. 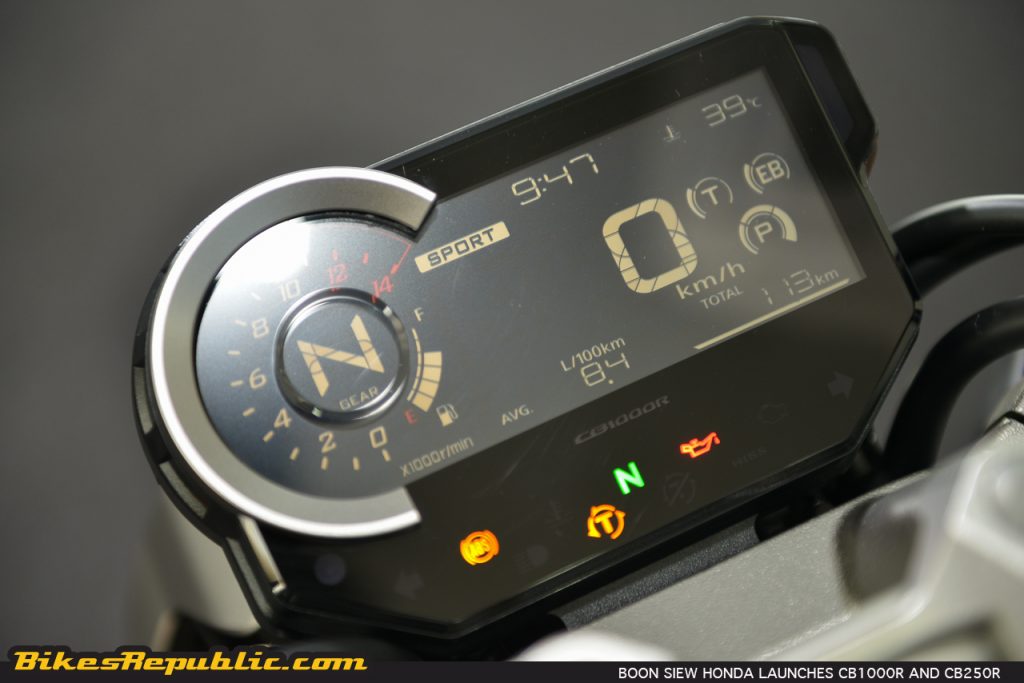 Despite being comfy, the CB1000R could be hustled through corners with ease, even at the narrow Turns Two and Four. It flicked over with hardly any steering input. 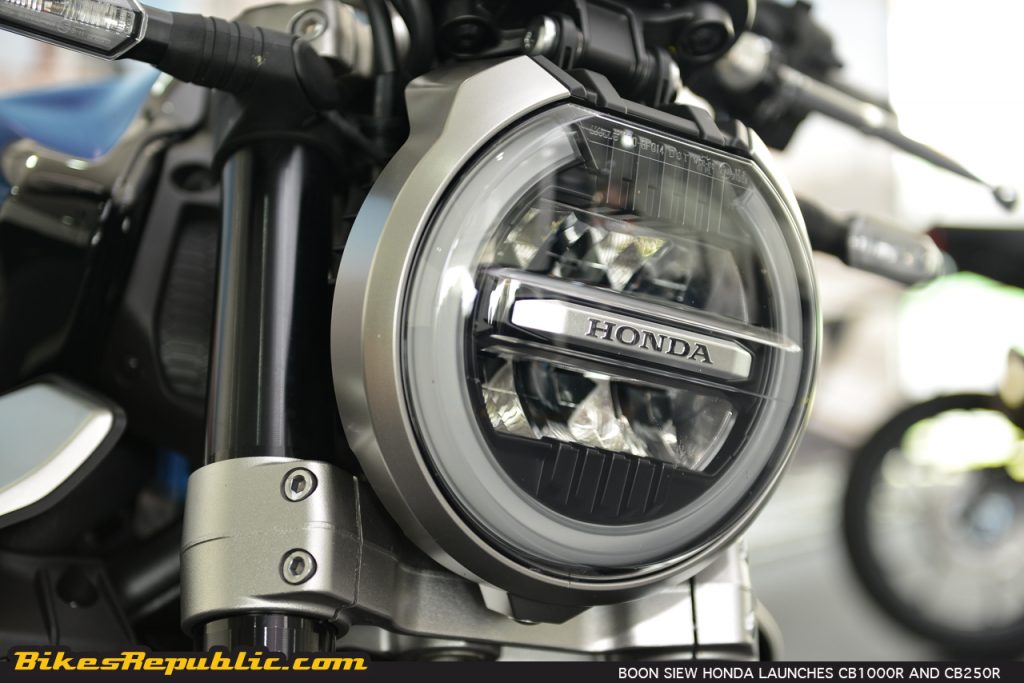 But it did fly down the straight. Braking hard for Turn One, I was surprised to find a lack of fork dive. I only found out later that the forks are Showa’s new Separate Function Fork – Big Piston (SFF-BP). 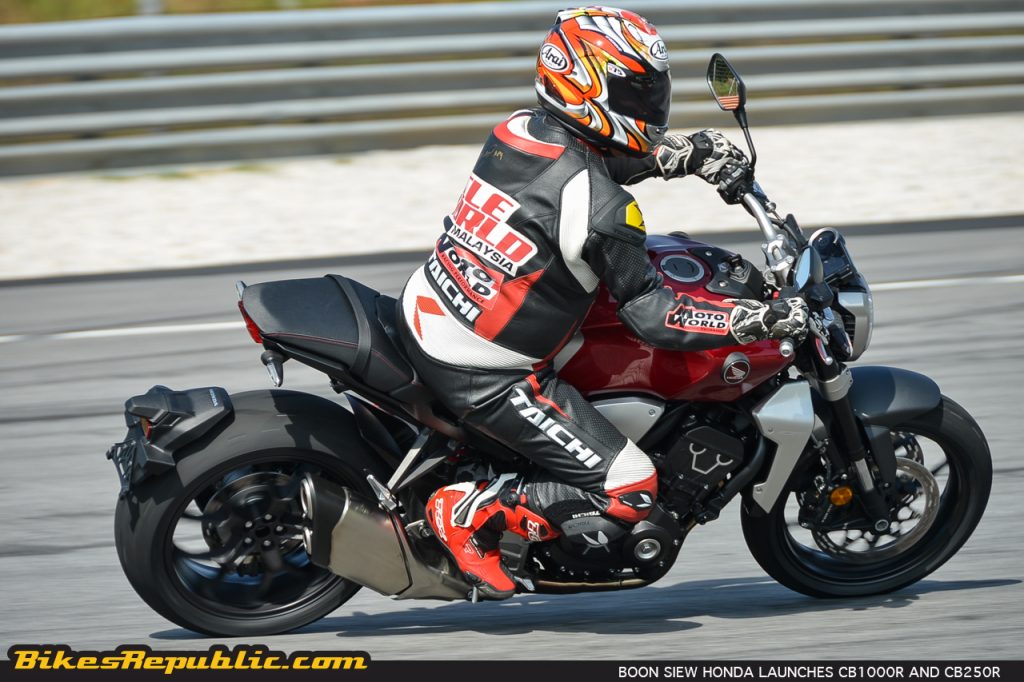 I was just starting to have fun when Ahmad Zakhwan, our lead marshal waved us into the pits. Sheesh.

This is gonna be awkward, I thought. I should’ve started on this one instead of the progressively bigger bikes. 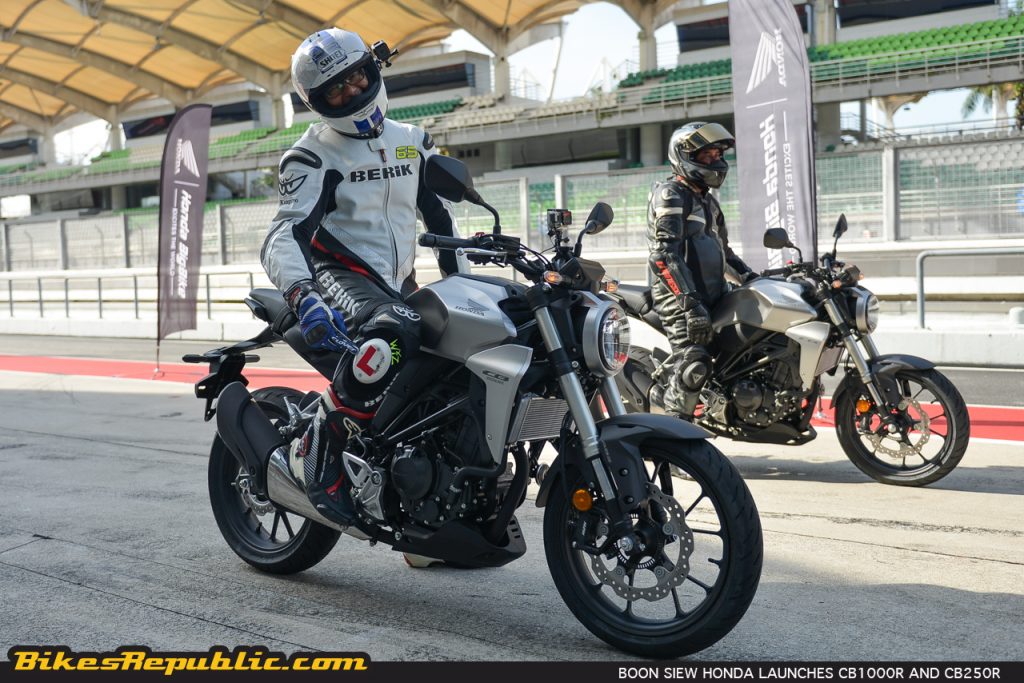 But it felt so good to ride a lightweight bike as soon as the clutch went out. The single-cylinder engine revved very quickly without much vibration. Just as the rest I’ve tested earlier, the suspension may be on the softer side but it didn’t mean the bike was going to squirm around. 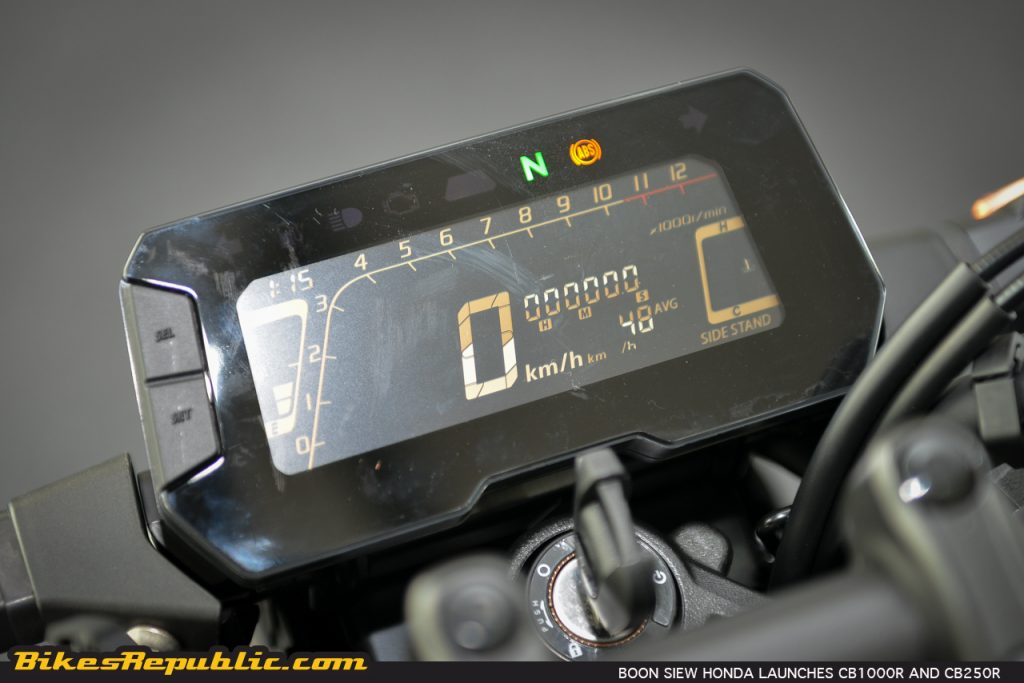 And since it was so light, I just chucked it into all the corners in a gear too high. The engine was also super smooth for a single and didn’t feel like it was being revved to destruction despite hitting the rev limiter a few times. I had so much fun I actually missed the checkered flag and had to circulate for one extra lap. 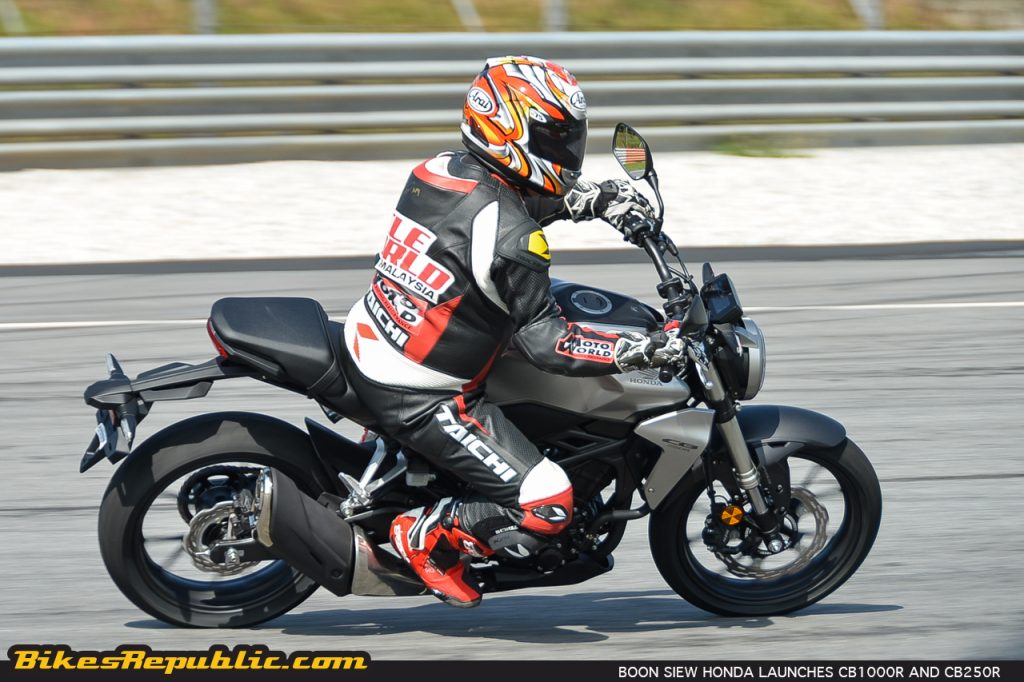 But the best thing about it was just amazingly easy it was to ride. Coupled with the low seat height, beginners will find it easily accessible. 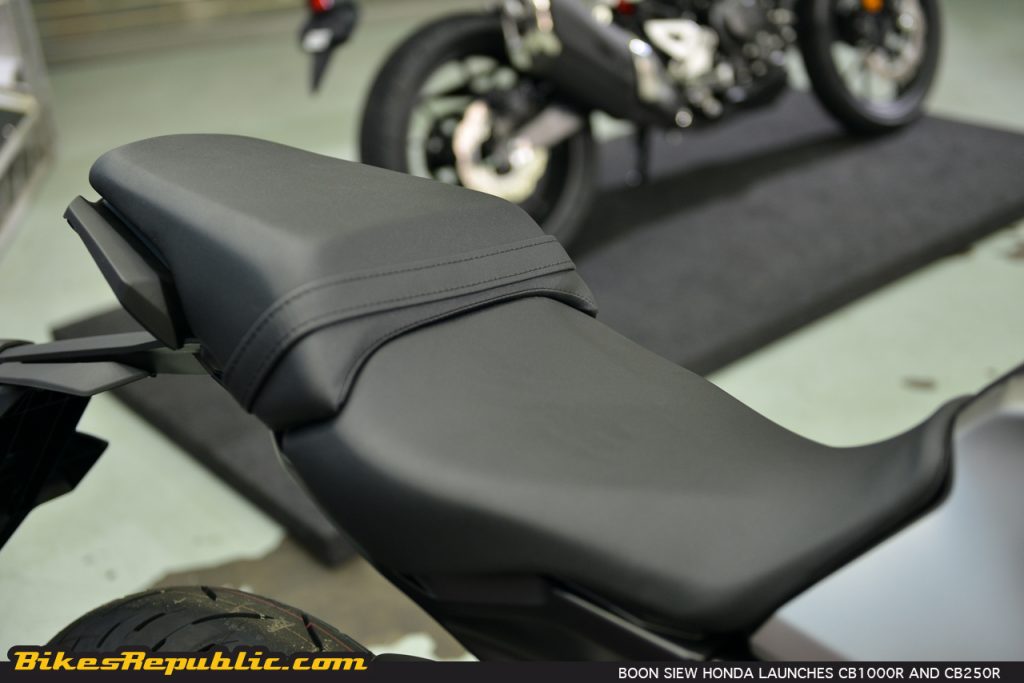 In closing, all four bikes were great and showcased Honda’s attention to detail and quality. All panels joined uniformly, the paint quality was consistently good for all four bikes. 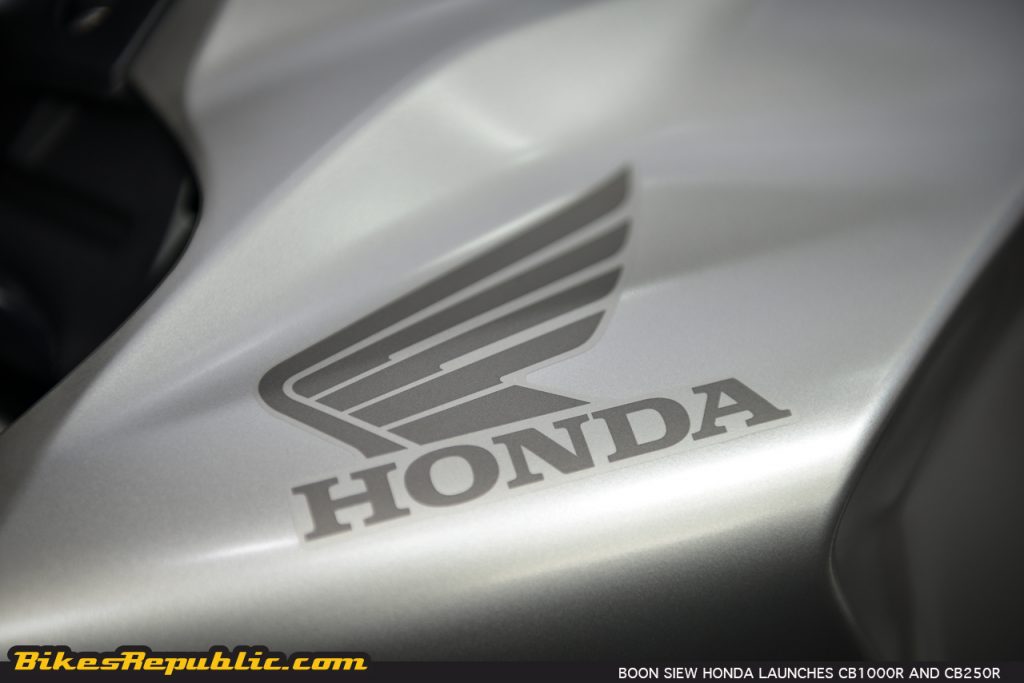 But I couldn’t wait to fully review the CB1000R at a later date.