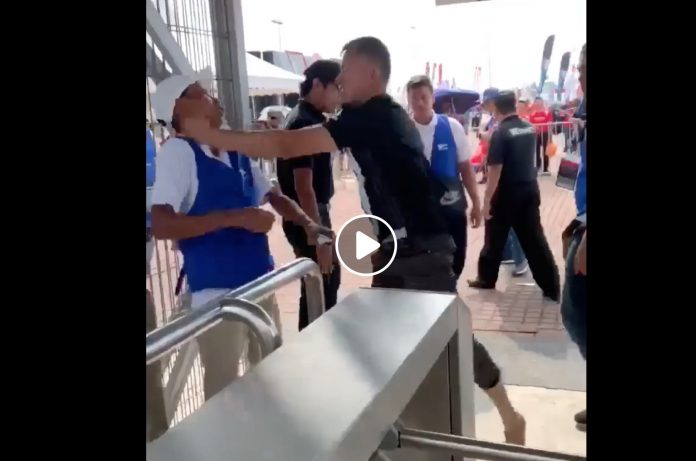 Race fans were treated to a “bonus MMA match” while waiting to enter the SIC grandstands for the 2019 Malaysian MotoGP today.

The video of a fight between a spectator and ticket checkers at the Sepang International Circuit (SIC) is making rounds in social media, originally posted by Sukan Star TV on their Instagram.

The video began with a man attempting to drop a flying kick on one of the staff members. He missed and landed on the ground, instead. The intended recipient became the attacker now and went on the offence by stomping and landing a few jabs on him.

Other ticket checkers got in the action, too. A yellow-shirted man stamped a few size-41 (judging from his size) soles on the now hapless man. They also landed a few more well-placed hooks on the man’s head as he tried to rise to his feet.

Soon, a man dressed in all-black attire and cap (looking pretty much like a referee) stepped in to push the assailants apart, and in a way, counting the man out. 1-2-3 — DING! DING! DING!

But just when we thought it was all over, the angry man sucker-punched another staff while getting back to this feet! The staff retaliated with more roundhouses to the back of the man’s head while he walked back into the crowd.

The cause of the fight is still open to speculation. However, it was largely rumoured that the staff had refused the belligerent man entry due to a “fake ticket.” No word yet regarding investigations into the matter.

It’s been an eventful 2019 Malaysian MotoGP, to say the least. First, there was news of the Angel Nieto’s paddock being broken into, followed by the sorrowful news of Afridza Munandar’s demise, and now this.

Now, shall we file this report under “Motorsports” or “MMA”?