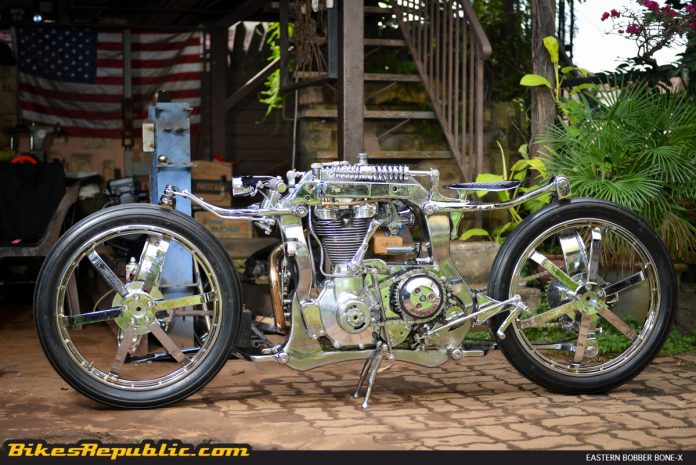 It’s probably an injustice if we looked at custom bikes without studying the elements of art and philosophy. Production motorcycles are also works of art, but being produced on the scale of hundreds and thousands, they are considered as being the products of certain templates.

Custom bike builders, on the other hand, operate on the philosophy of one: The one and only. The best one. The One.

That’s certainly what Omar Jumiran, the proprietor of Eastern Bobber, one of Malaysia’s premiere custom motorcycle builders, had in mind when he created his master creation seen here known as the Bone-X. 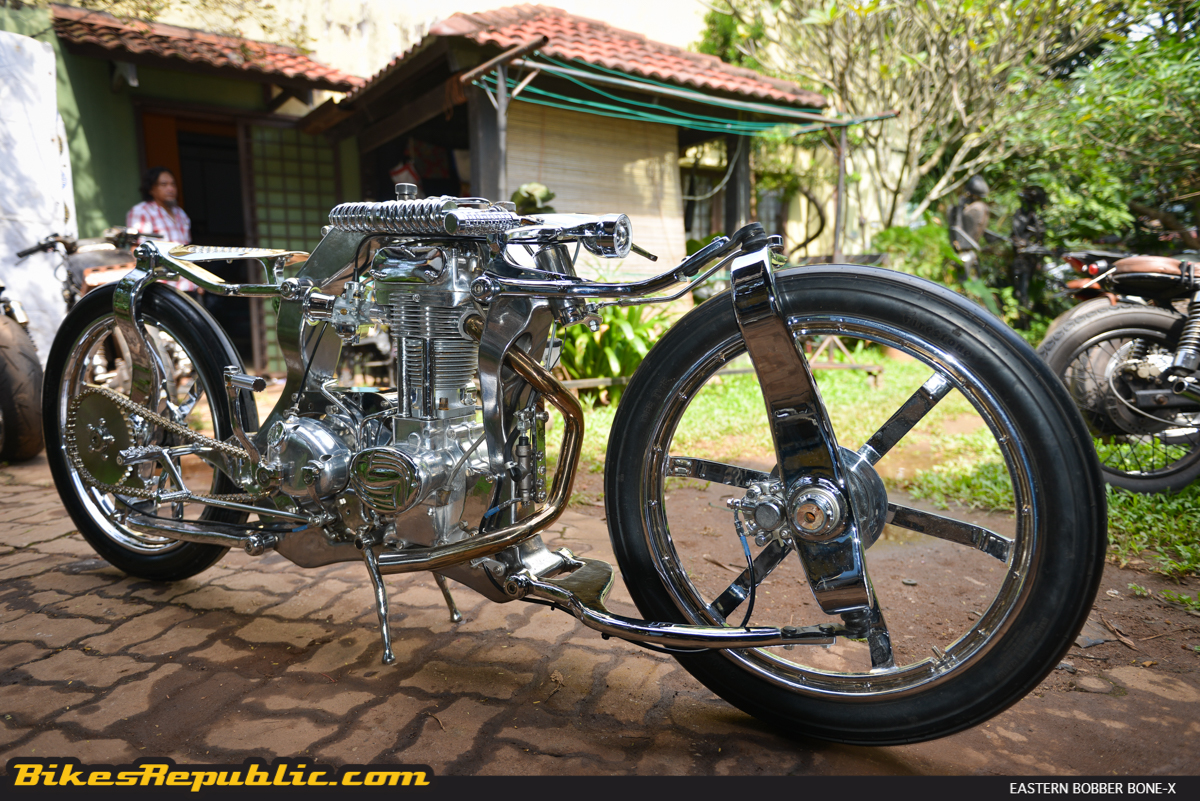 The Bone-X has earned Omar and Eastern Bobber a spot at the AMD World Championship of Custom Bike Building at the Intermot show in Cologne, Germany, to be held in October this year, after winning the competition at the Motonation event in early December. Motonation is sponsoring Omar’s trip there. (Please click on the link below for our report from Motonation.)

I had first met Omar two years ago when I covered the Triumph Malaysia-Art of Speed Invitational Bike Build-Off in 2015. Eastern Bobber had been one of the four finalists. Meeting him at his home again, there’s the signature Eastern Bobber Batbike and, the space-framed and girder suspended bike. There were also robot sculptures scattered around the yard.

“I had wanted to build something totally unseen before. So much so, I couldn’t even name the concept for Bone-X,” laughed the soft-spoken ex-metal welder and wrought iron artist. 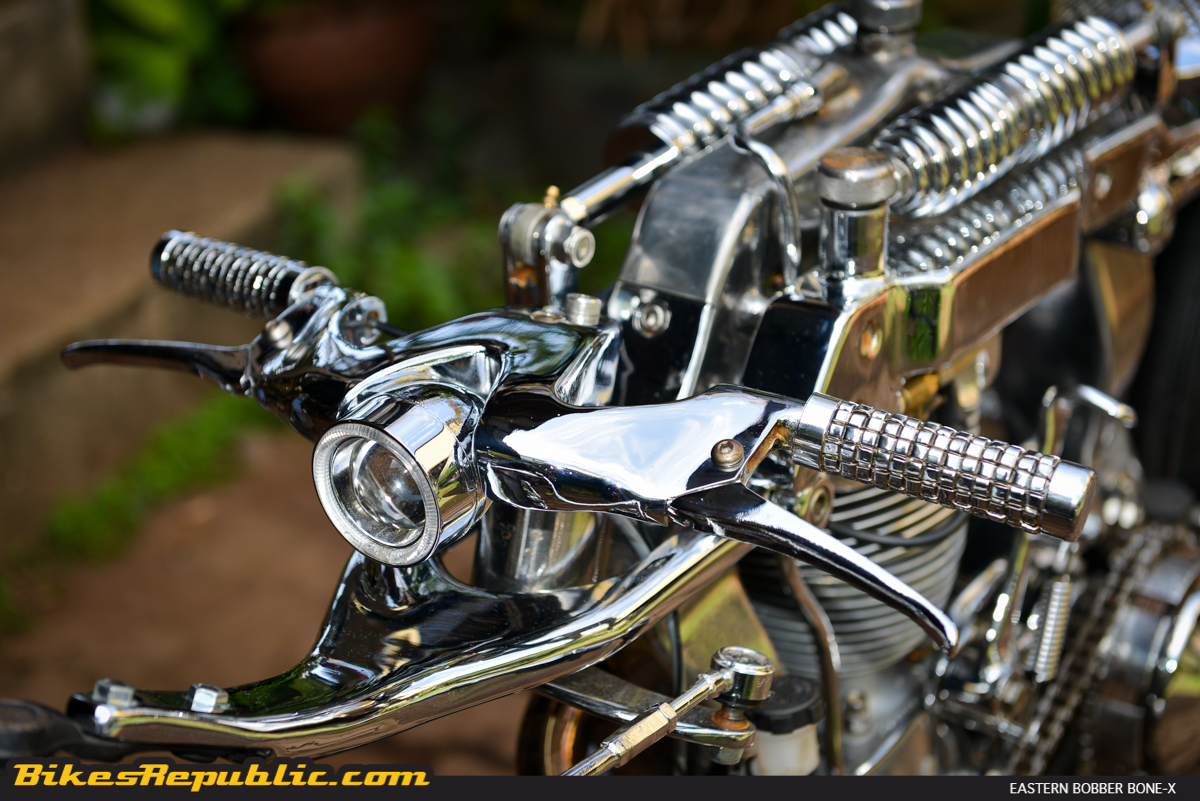 It’s through this expertise that Omar bent and welded parts of Bone-X, without resorting to CNC machining. Almost every part of the bike is metal, save for the tyres and parts of the brake and clutch cables.

Everything on the bike is radical, starting from two large springs sitting on top of the miniscule rectangular gas tank which forms the bike’s backbone. 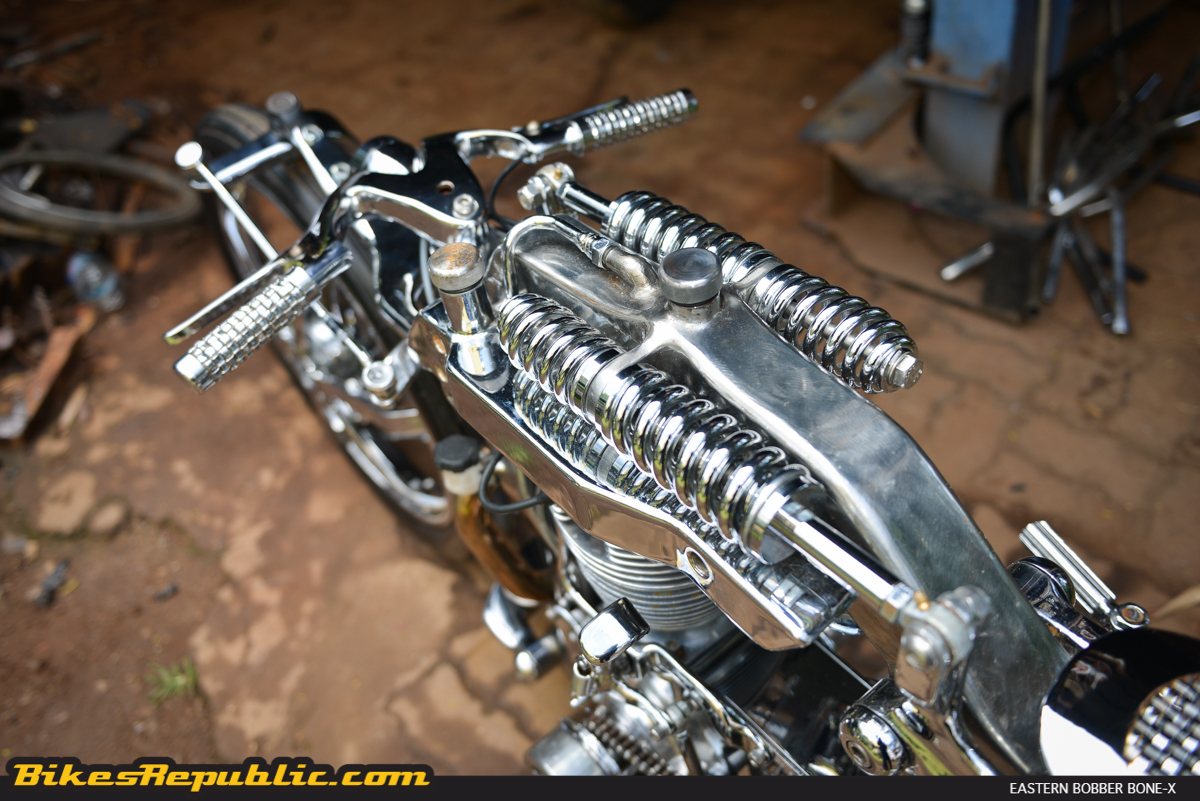 The springs are attached to the fore and aft upper suspension levers. Upon closer inspection, one half of each spring is double coiled. “The single coiled part takes care of compression damping, while the double sprung part handles rebound. The levers are long so it needs more spring strength to suspend each end of the bike,” explained Omar. The springs are laid down flat thus more spring tension is needed, compared to most production bikes whose shocks are mounted almost vertical.

Regardless, the springs contribute to something that looks like a rib cage.

Omar aimed for a symmetrical look on each end of the bike, using large diameter, 21-inch wheels. While the rear assembly forms a single-sided swingarm, the front results in a hub centre-steering suspension. The handlebar is attached to the front suspension’s upright link via a shaft on ball joints. 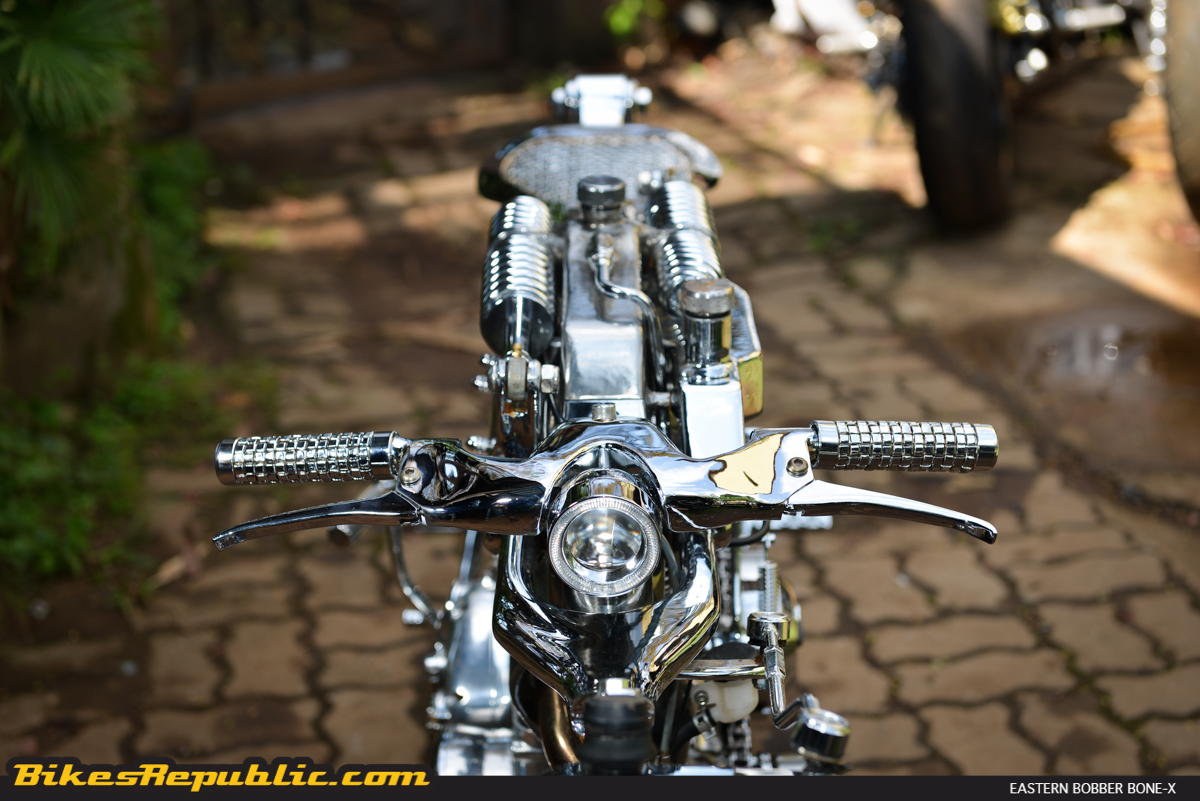 “I’ve always been fascinated by the hub-centre steering front suspension layout ever since I saw the Elf Honda GP race bike in the 80’s, ridden by Ron Haslam. I was just a kid back then.”

Omar opened up a little more, “In my opinion, forks have their distinct shortcomings, hence the single arm setup was explored to take its place. I liked the Yamaha GTS when it came out and I feel it’s a real shame that manufacturers have not continued down that route.” (You can read about the Elf Honda and Yamaha GTS here.) 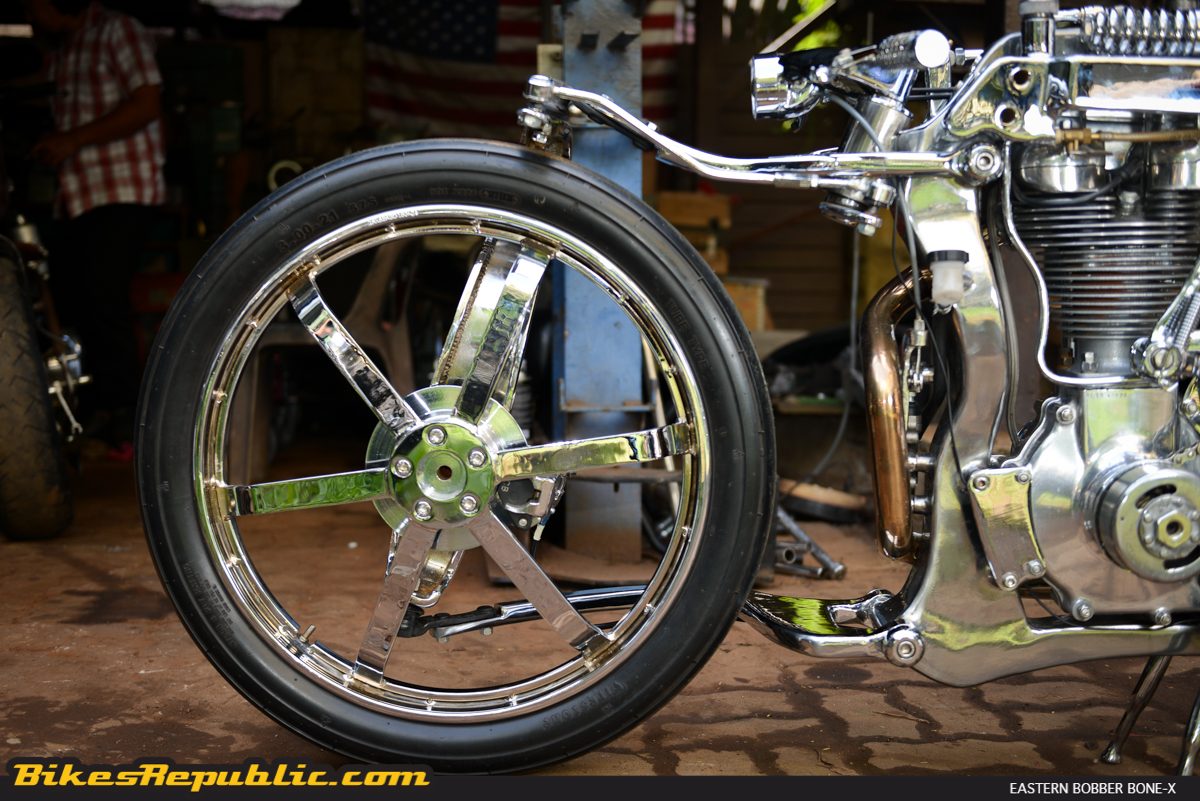 Heading downwards, the 1967 AJS engine has been either been chromed or polished to fit the overall chromed theme. It’s impossible to miss the exhaust downpipe being routed through the frame’s vertical member. 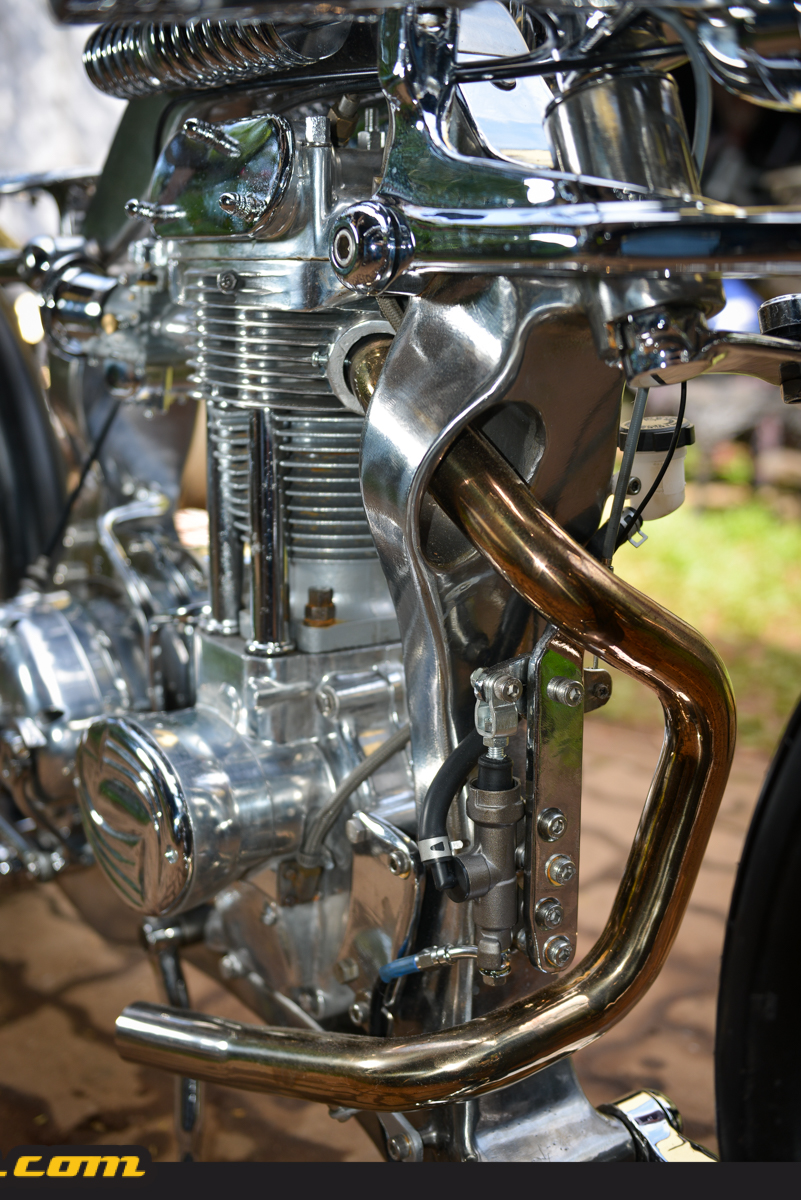 There’s a vertical lever next to the left side of the engine. Everyone had first thought it was the gear shifter, but it turned out to be the lever for the centrestand, instead. “Ah, the handshifter is overdone and too mainstream now, so I wanted to do something different.” 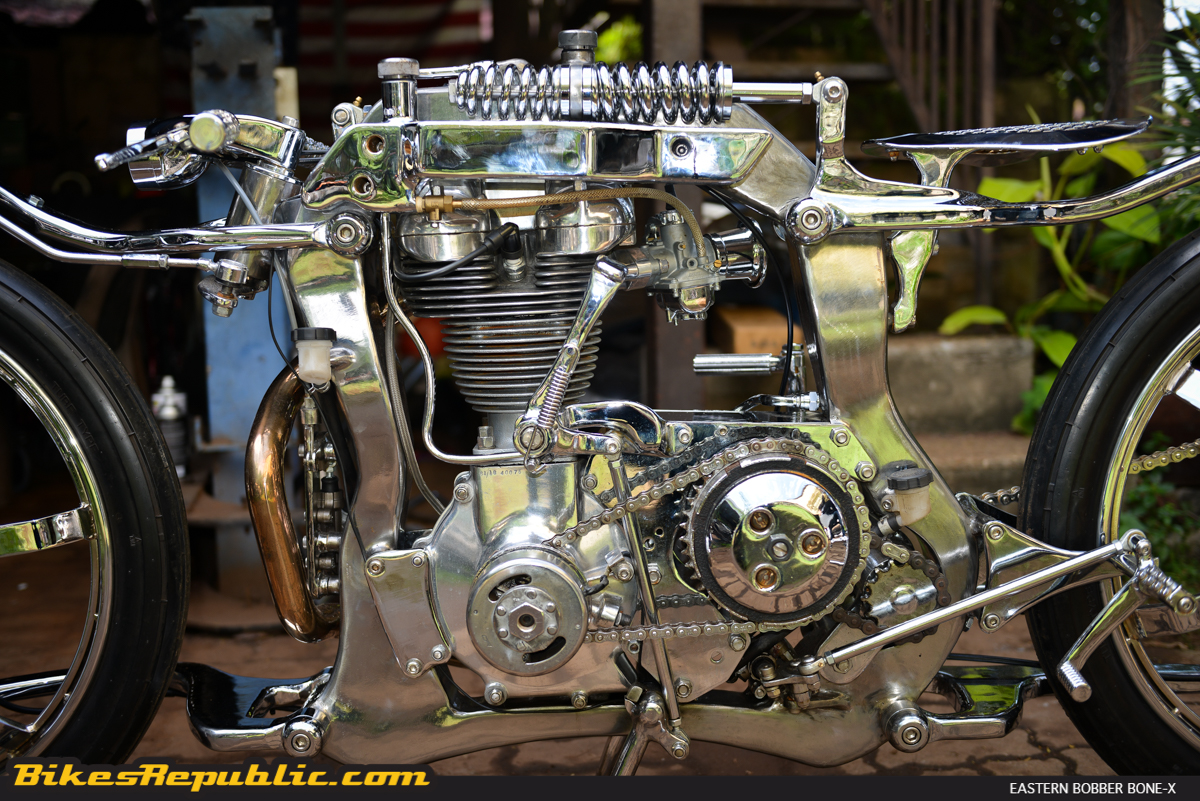 The powertrain arrangement’s beautiful simplicity is set out in plain sight. A primary drive chain transmits power from the crankshaft to the dry clutch, whose shaft is also the input shaft to the gearbox. But Omar performed some modifications to the final drive. “The final drive chain exits on the left side originally, but I can’t let it run on the outside (left side) of the wheel. So I attached the final drive to an idler shaft to drive the sprocket on the right side.” 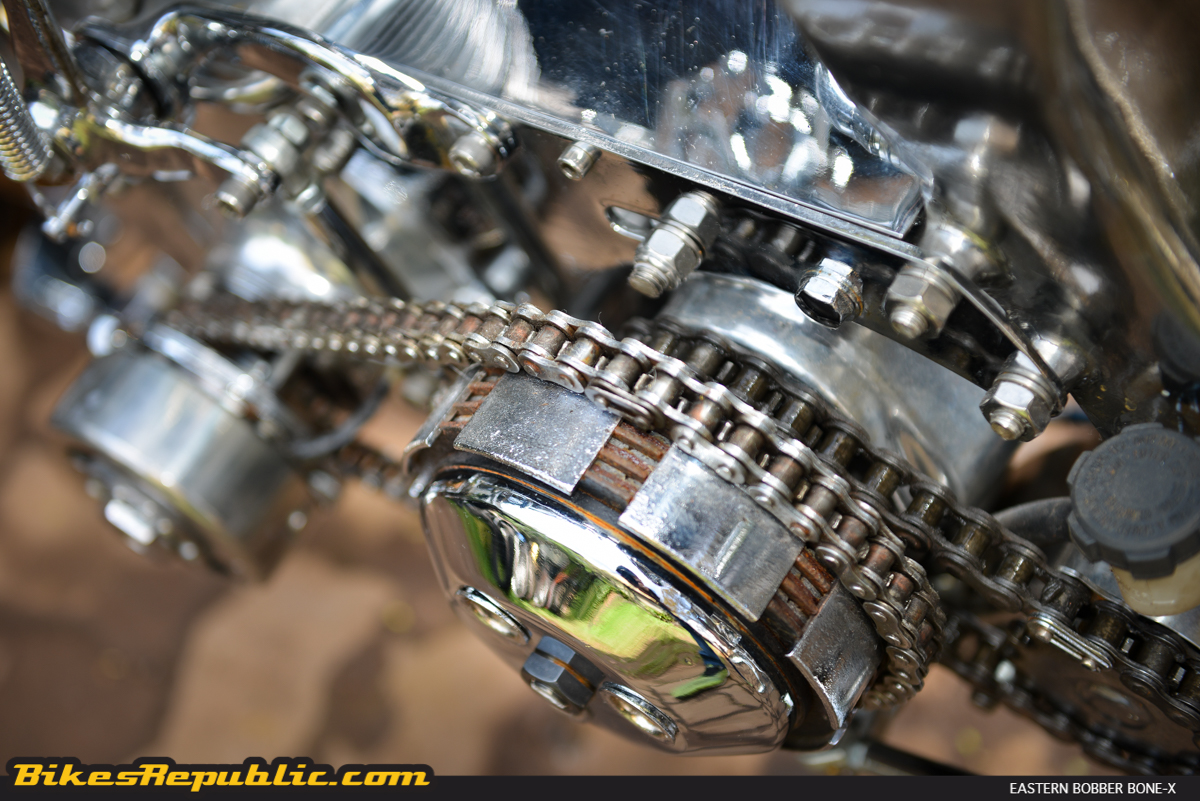 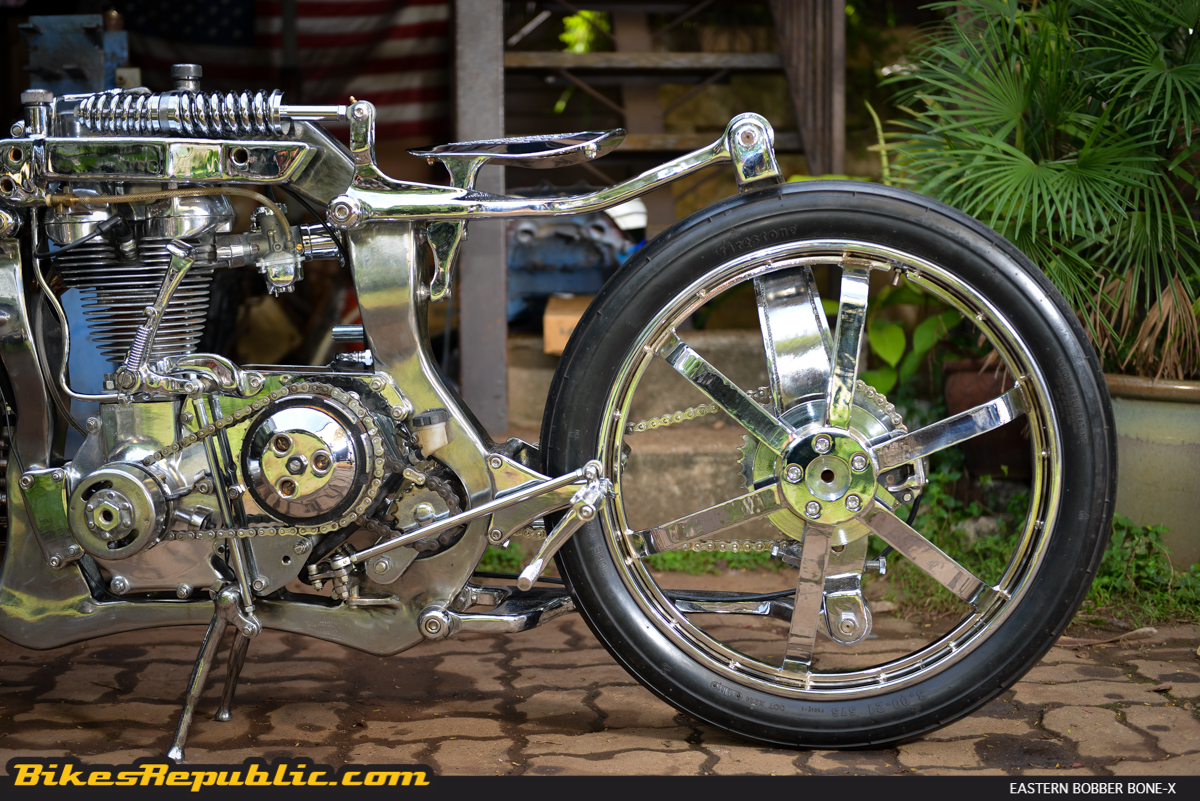 The result is an organic-looking bike. To Omar’s and his peers, the Bone-X looks skeletal, thereby earning its namesake. However, to the unitiated Joe Public, the bike resembles something inspired by H.R. Giger’s biomechanical concepts. 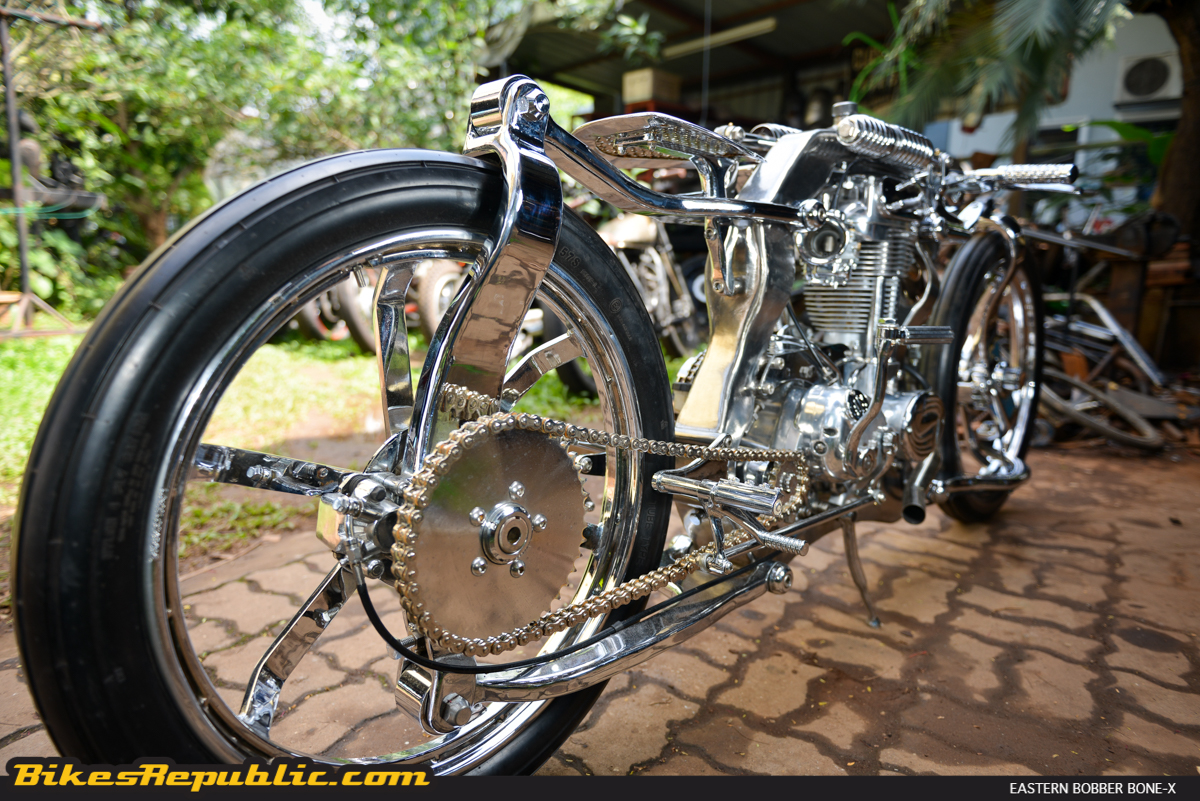 To our eyes, the Bone-X is as good as it gets, but in the eyes of the artist, there’s room for improvement. “Certain parts of the bike still need better finishing. It looks alright under the lights currently, but we are required to also display the bike outdoors in Germany. It’s during this instance when the imperfections will stick out like sore thumbs.” 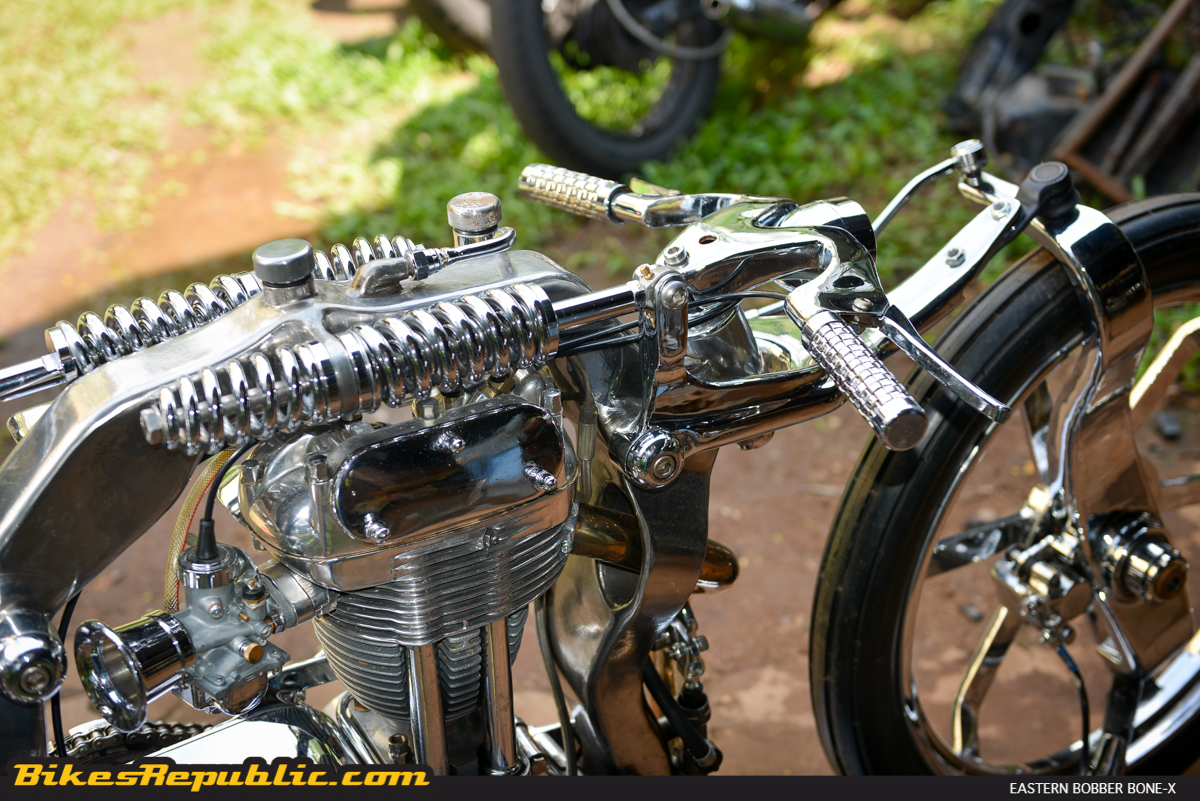 “I do hope there are kind souls out there who sees the importance of a Malaysian bike actually competing at the international show. I wouldn’t want to embarrass Malaysia with an unfinished bike, and while it’s hard for me to say this, I will appreciate sponsors who could assist me in completing the Bone-X. it’s time we step out from being Jaguh Kampung,” hopes Omar. 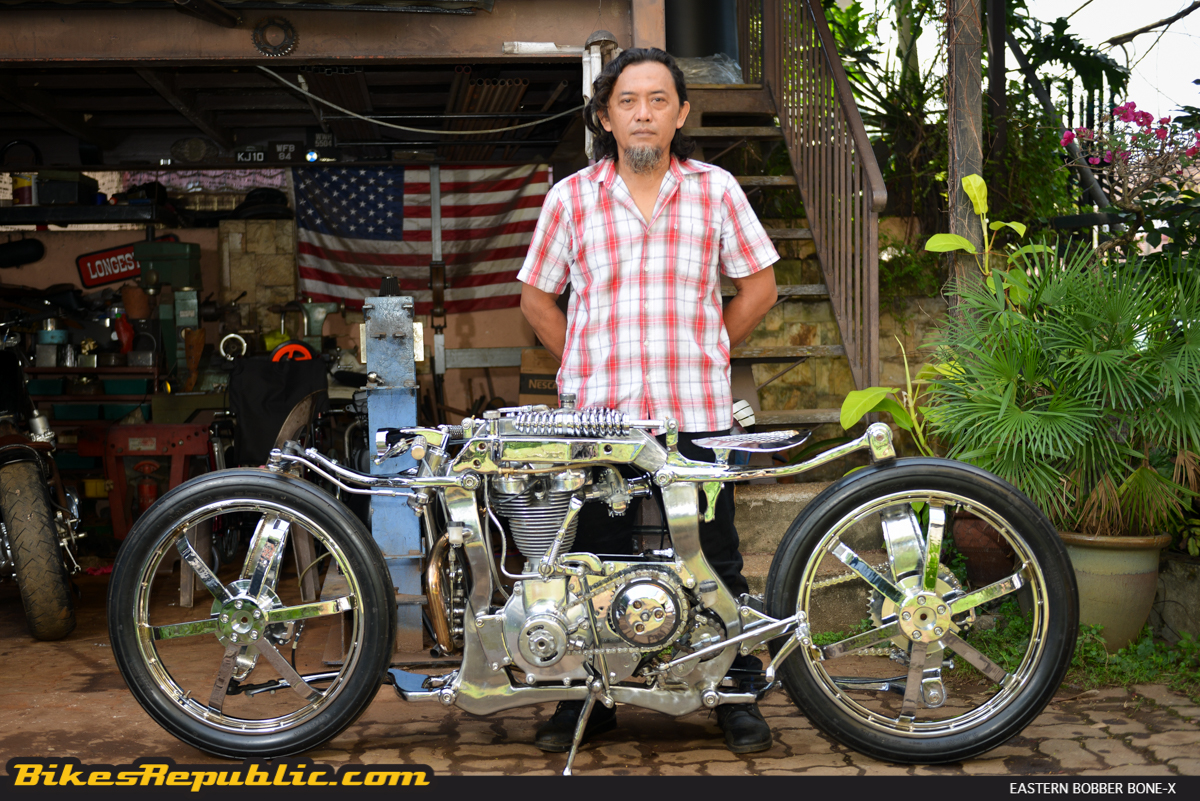 Omar is fully dedicated to the Bone-X now, as The One bike for him. As for us and together with Omar, we hope Bone-X will be The One in the hearts of the international judges and peers in Germany.

Do follow this story all the way to Intermot in Germany.