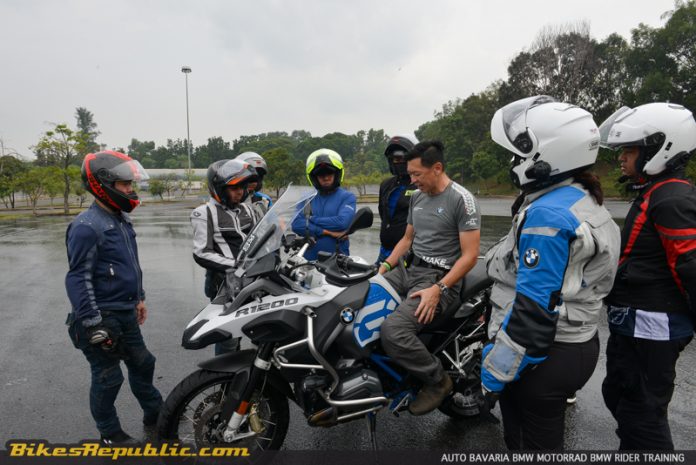 Bikes may be getting “smarter” but the soft science of riding – as in the rider – cannot be ruled out of the equation. This was why Auto Bavaria BMW Motorrad organized the BMW Rider Training clinic over the weekend.

Sure, modern motorcycles are loaded with safety features such as ABS, traction control, wheelie control, combined braking and everything in between, but that doesn’t mean riders just need to sit back and let the systems do the rest. We may as well hang up our helmets and take Grab Car, if it was so. 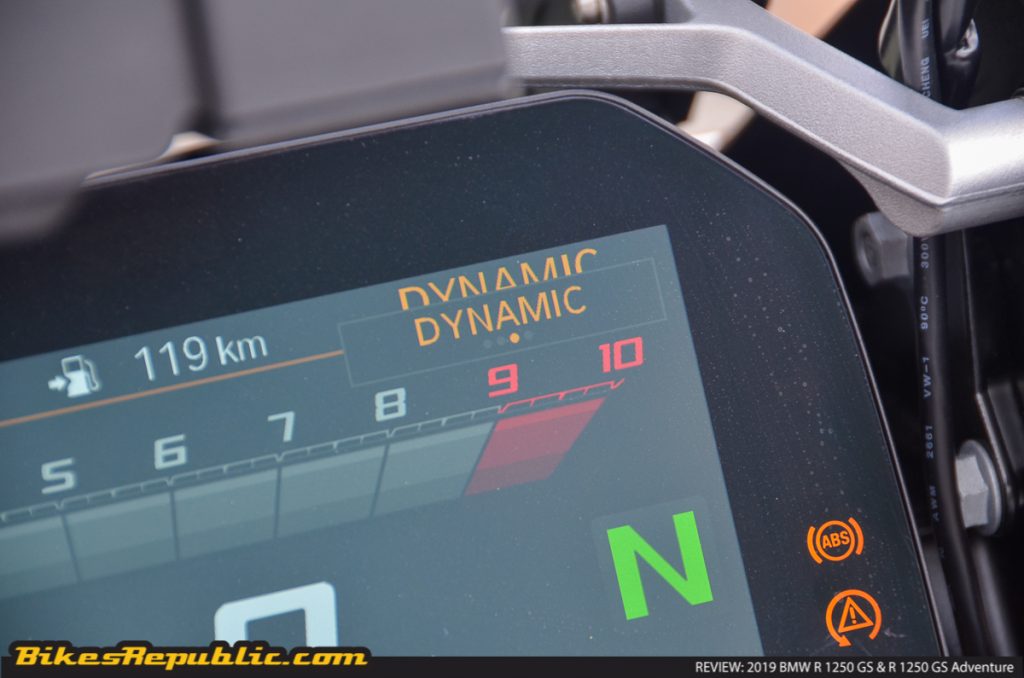 You see, riders still get into trouble despite the advancement of motorcycle technology. In fact, 90% of motorcycle crashes could be attributed to rider error from one degree to another. Technology complements the rider, instead of the other way around. 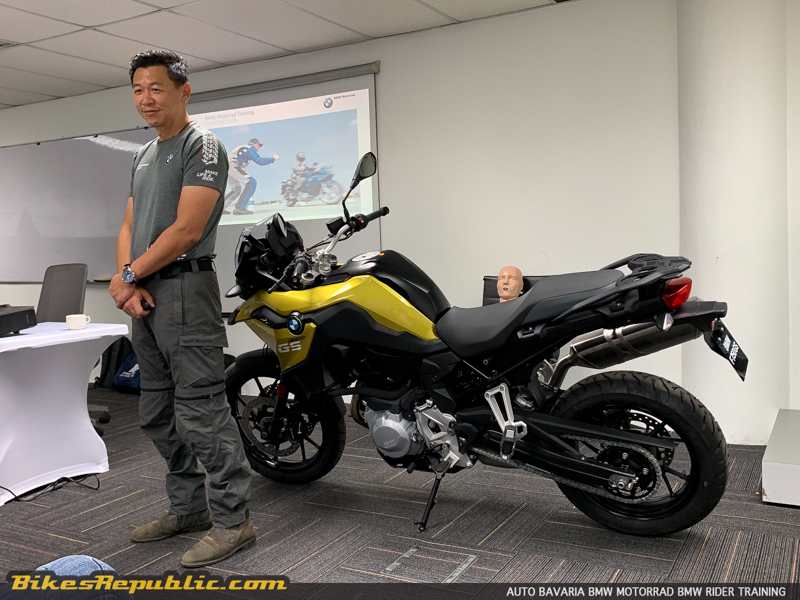 The sessions were carried out through the day and the number of participants was limited to only a maximum of eight. That low number allowed the instructor more time to focus on each student. 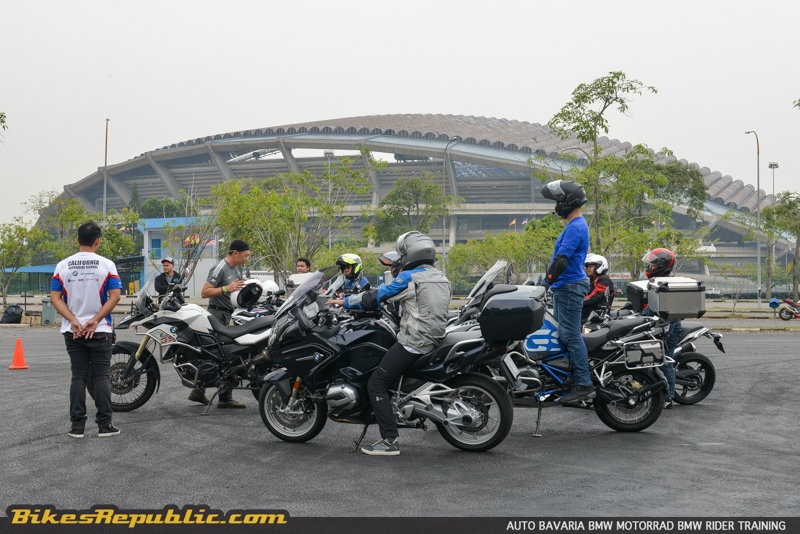 It kicked off with the introduction of certified BMW Motorrad trainer Wong K.K. K.K. has been riding extensively for many years, besides carrying out training for BMW car owners before switching to motorcycle training. 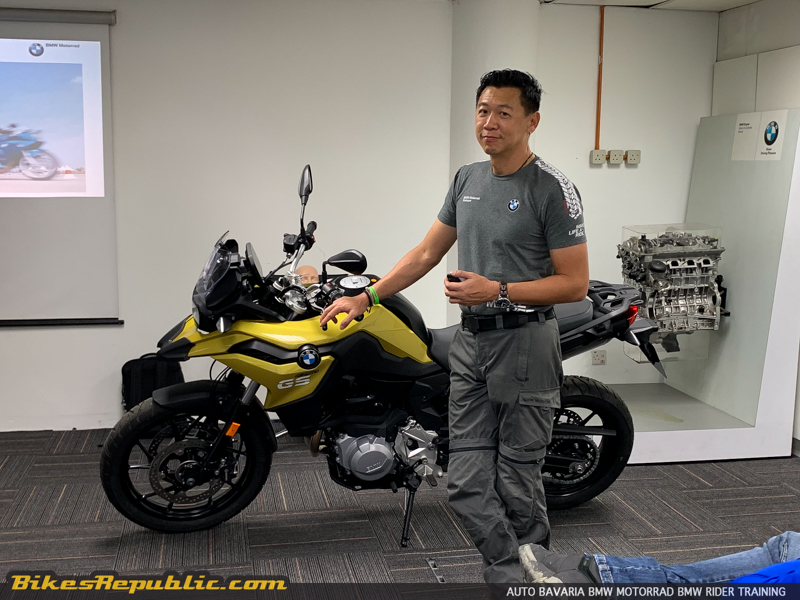 Class began with some reflective questions. The objective was to get the participants to recognize the risks, try to avoid them and solve threatening scenarios through training and learning to ride. 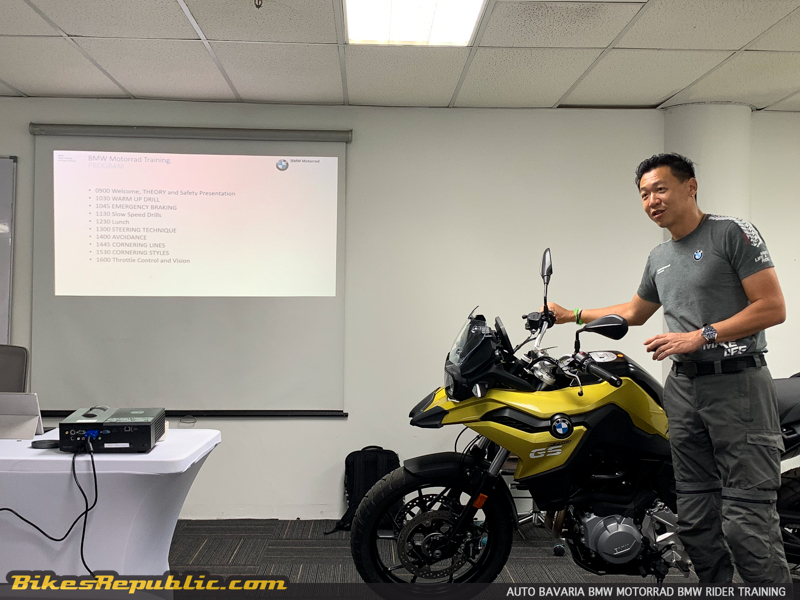 Therefore, subjects covered the basic tenets of riding including turning, braking, vision, throttle control, body positioning, cornering. Additionally, K.K. also touched on urban survival such as being visible to others, reading traffic flow, avoiding the blindspot, ATGATT (all the gears all the time), 3-second rule, being paranoid about other road users and situational awareness. 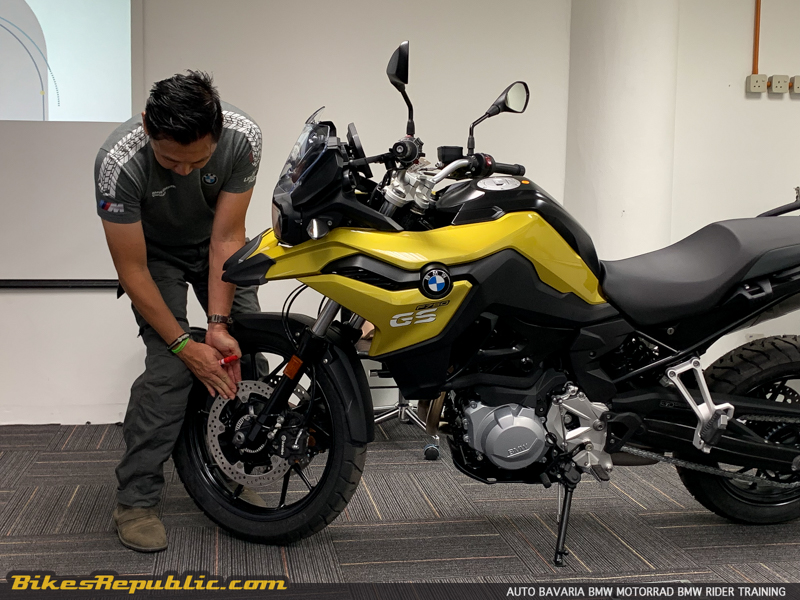 He also talked about group riding i.e. convoys which covered communication, rules, pacing oneself, avoiding fatigue, besides being fully prepared with emergency kits.

However, the main difference to this training was the basic life support talk and demonstration. The hosts roped in Dr. Khairul Azri, an Emergency Physician at the Universiti Malaya Medical Centre for assistance. 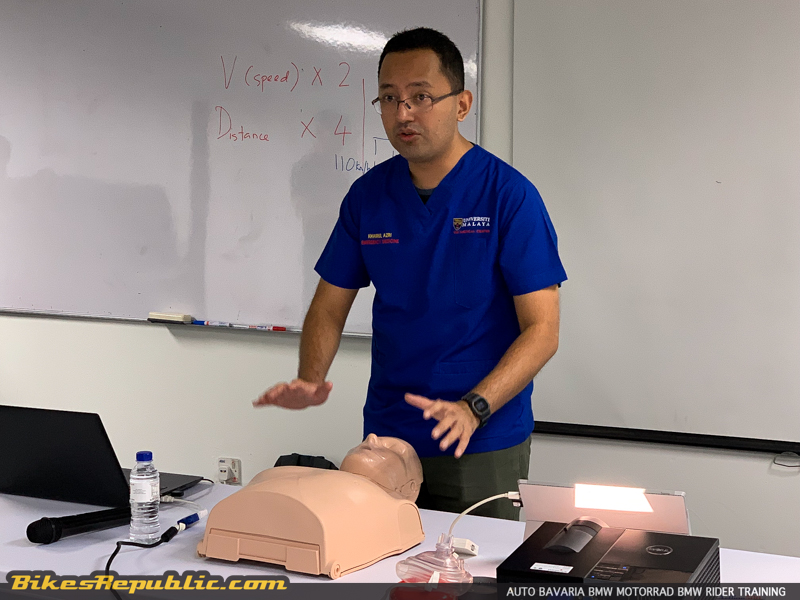 He spoke about the need for riders to learn basic life support (BLS) in order to save lives, those which could very well be our very own riding buddies’. As such, his talk covered subjects such as recognizing the severity of injuries, when and how to perform CPR, how to remove the helmet of a fallen rider, and other facets of emergency care. 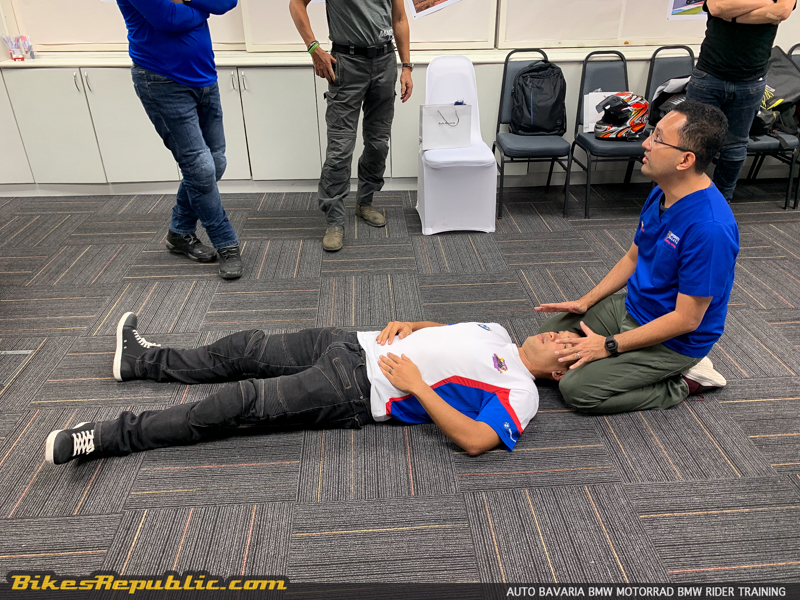 It was a shame that his session was very compressed but AB will bring the good doctor back for a full-blown BLS course. 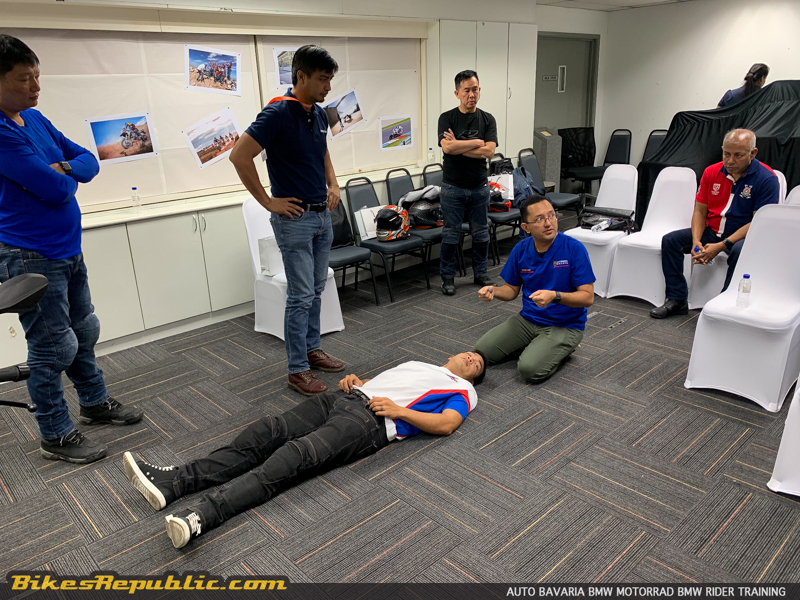 The participants and trainers then convoyed to the parking lot outside the Shah Alam Stadium for the practical part of the training. 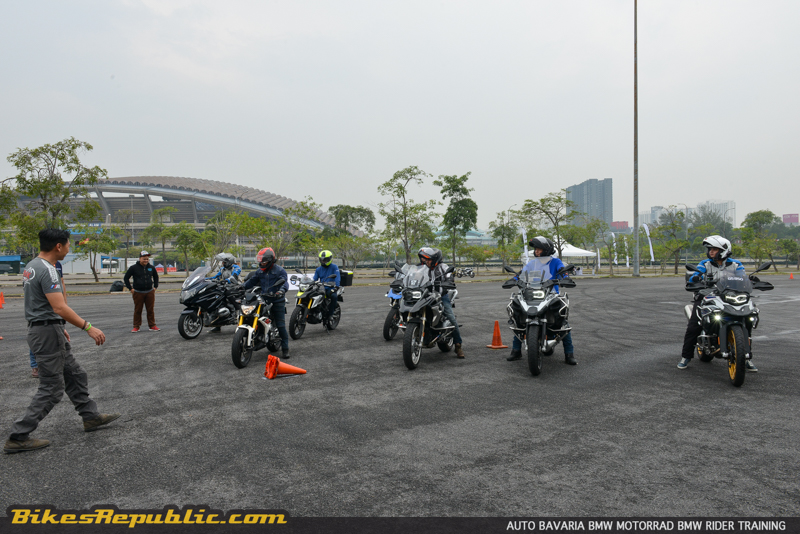 The first exercise was for tight turns. It sought to provide the students with the confidence to turn their bikes within confined quarters and u-turns. It also highlighted the bikes’ abilities that are usually under-utilised by their respective owners. 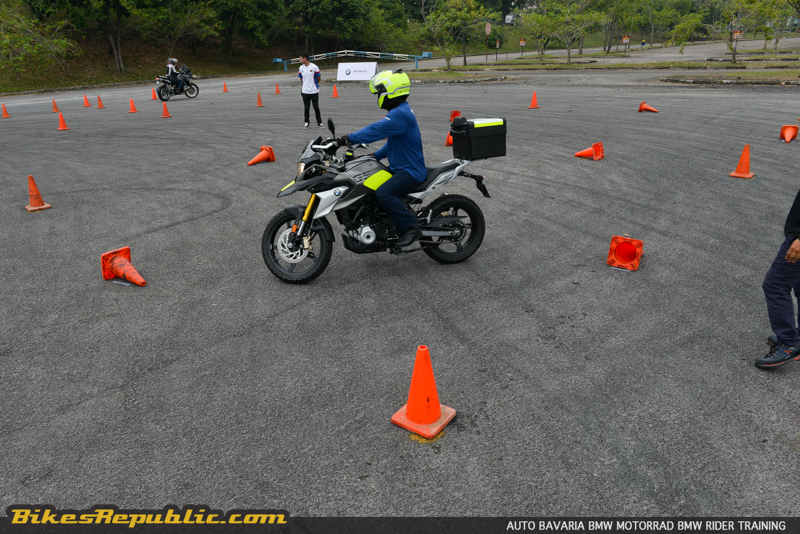 For example, the participants needed to ride in a circle within a 2.2 metre square “box.” Most expressed surprise that their bikes including the R 1200 RT and R 1200 GSA could perform the task. 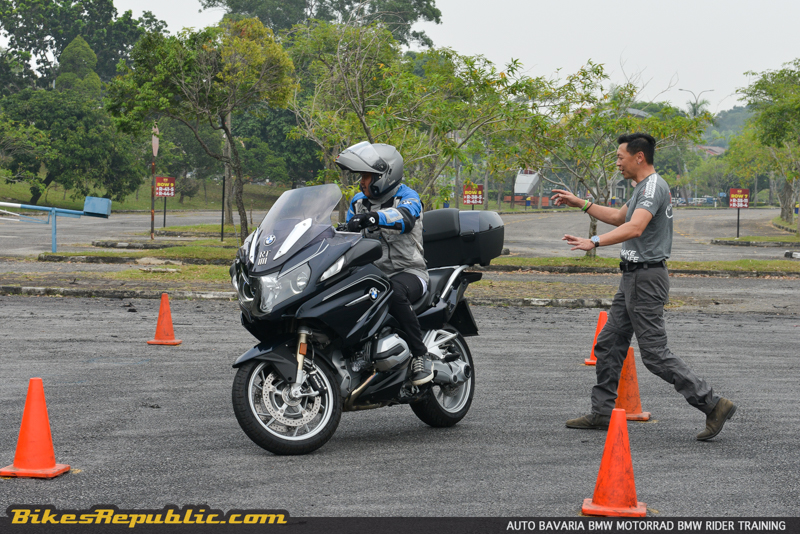 They proceeded to the slow speed slalom afterwards. This was to teach low-speed maneuverability to simulate riding through heavy traffic. 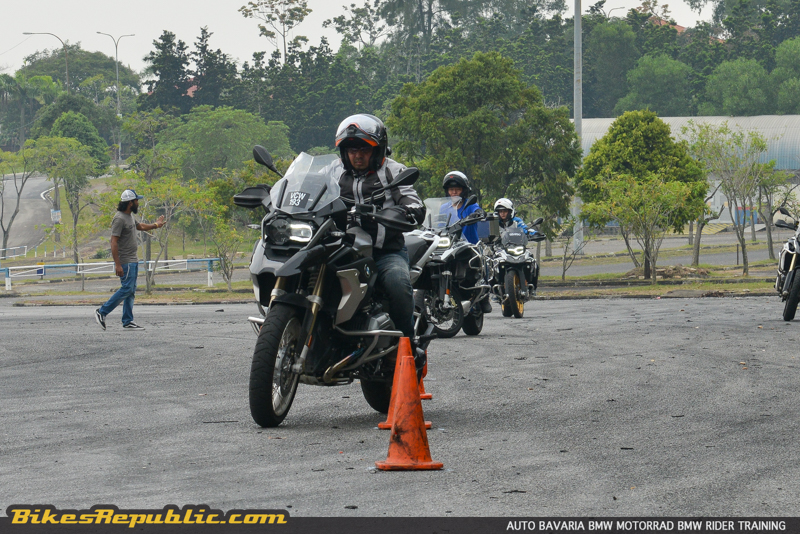 But perhaps one of the best module of the day was braking. Braking is a skill that not many riders are aware of and instead use that facet of bike control as an on/off switch. In fact, while riders everywhere specifically demand the ABS feature, not many are actually aware of what it does and how it works. 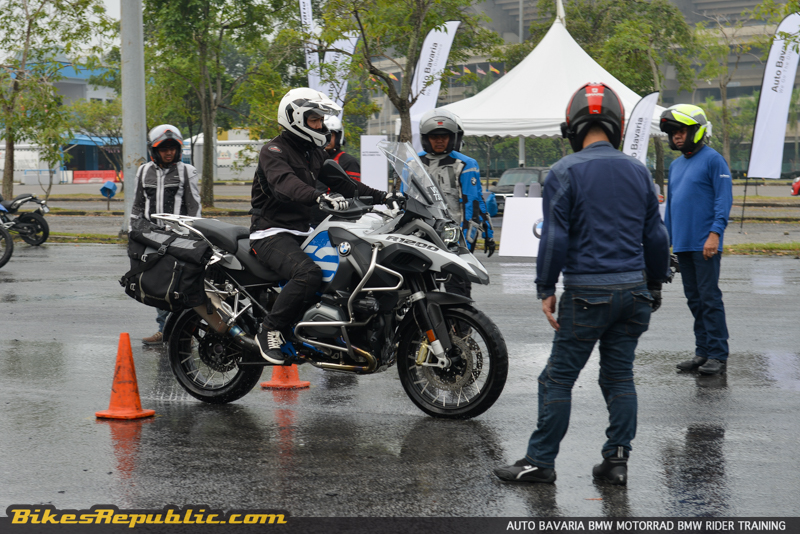 A sudden heavy downpour wetted the “track” and it became even more conducive to learn about ABS.

The exercise also served to emphasize BMW’s braking technology such as ABS Pro and Integral ABS. 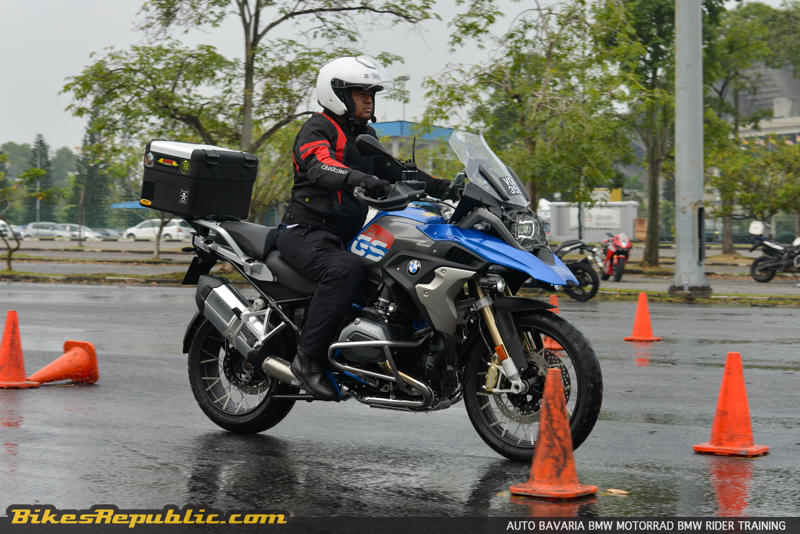 ABS Pro is actually lean-angle-sensitive ABS, named as “cornering ABS” by other manufacturers. The system provides different braking strategy and brake pressure compared to when the bike is straight up to allow safe hard braking hard while leaned over in a corner.

Integral ABS, on the other hand, is called “linked braking system” or “combined braking system” by other makers. Pressing the front brake lever only will apply some rear brake pressure to stabilise the rear end and chassis. Vice-versa, applying the rear brake only will also trigger some pressure in the front brakes. Consequently, braking is more efficient and safer, in addition to providing more confidence to the rider. 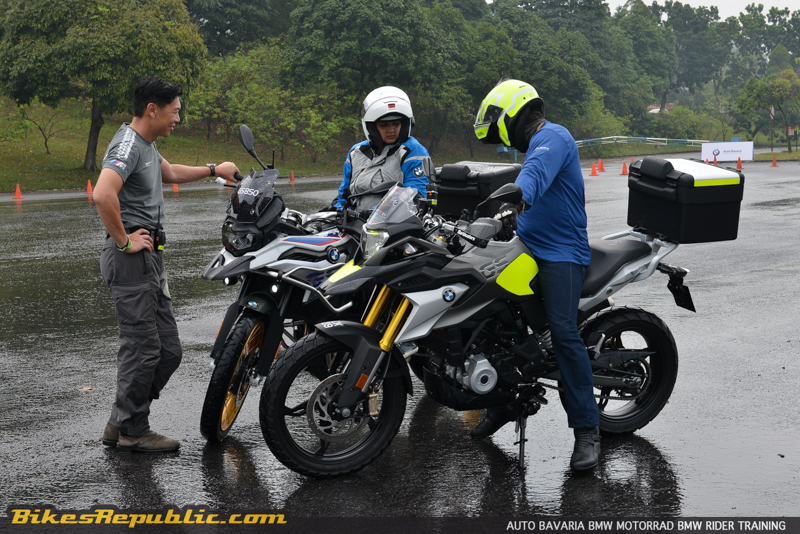 With the ground drenched, the riders were told to ride to certain speeds and apply maximum braking pressure.

The most impressive part was watching a couple of riders who deliberately rode faster to test the limits of their bikes. Watching 250-odd-kg (the R 1200 GS Adventure) and almost 280kg (R 1200 RT) bikes being hauled down from high speeds to a complete stop without drama was probably the best spectacle of the entire class. 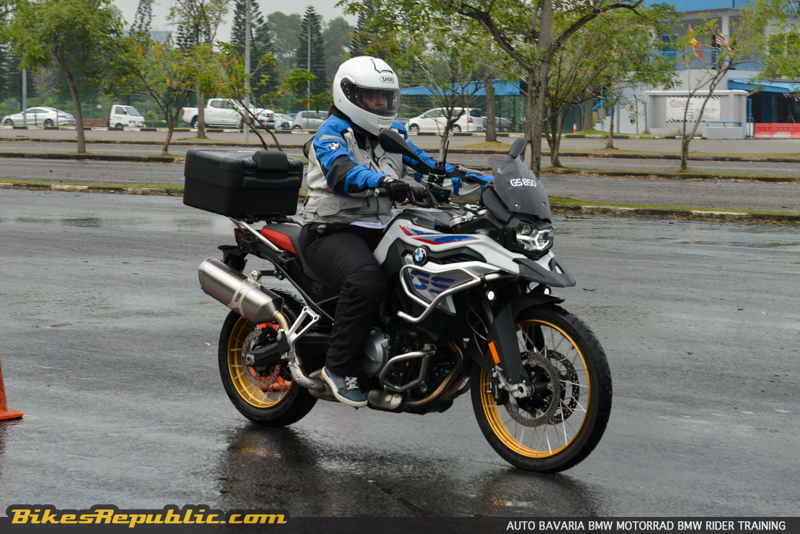 Lessons continued throughout the day with the riders learned more and more complex skills.

This writer also heard participants complaining that nothing of use was actually thought at driving schools. All they had to do was remember the procedures to pass. Not one was taught about steering, throttle control, braking, vision, steering and just about everything else. And some people kept wondering why we have so accidents and fatalities among motorcyclists. In any case, they were thankful that AB BMW Motorrad took the initiative to organise the clinic. 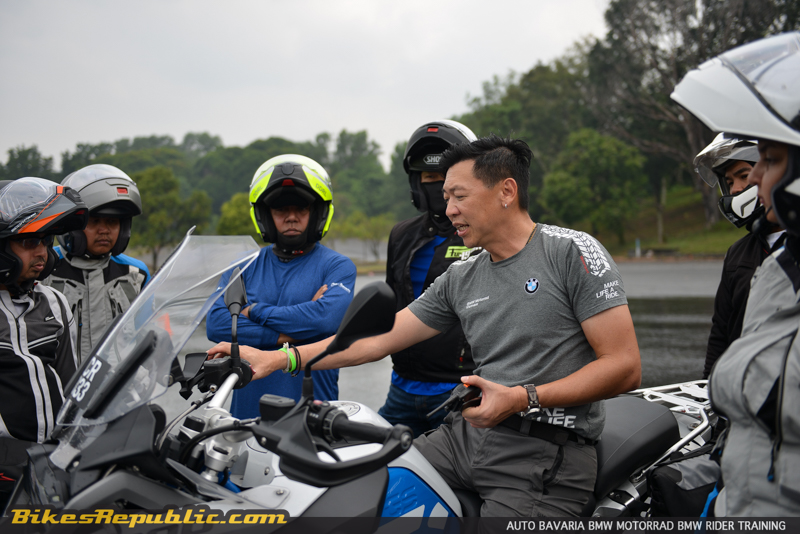 In the end, what mattered was eight BMW owners and riders rode home with better skills than when they first stepped into class that day.