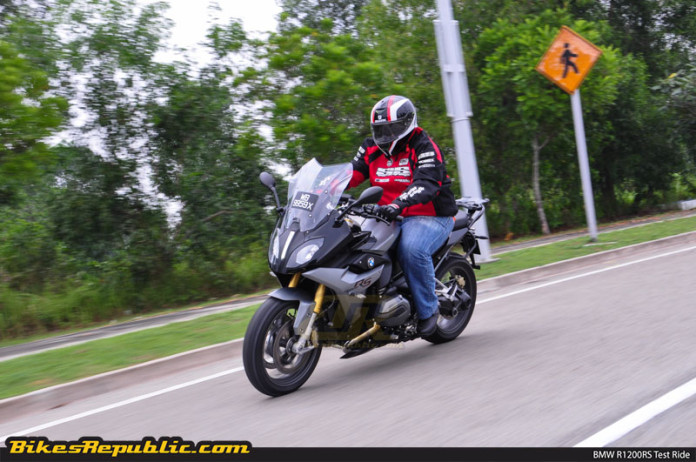 With adventure tourers being all the rage over the past few years, sports tourers have definitely lost their charm.

The change vitalized over the past few years with the release of models such as the Yamaha Super Ténéré, Triumph Tiger Explorer, KTM 1290 Adventure, and Ducati Multistrada 1200, which are basically upright sport-touring motorcycles that provide endless comfort and mindless speed.

However, BMW Motorrad, the brand which invented the segment back in 1973 with the R90S, vows to bring sports tourers back to their glory days with the introduction of the 2016 R1200RS. Believe it or not, the bike we are looking at here is the first RS model to be offered by the company after nine years, since the 2005 K1200RS – a hefty sport-tourer featuring a 130-horsepower flat four.

This latest version, however, is a bit more faithful to its R100RS roots and features a boxer engine. The 1,170cc boxer, which is the same 125-horsepower semi-water cooled engine that is powering the GS, is capable of producing 125hp at 7,750 rpm, and 125Nm of peak torque at 6,500rpm. 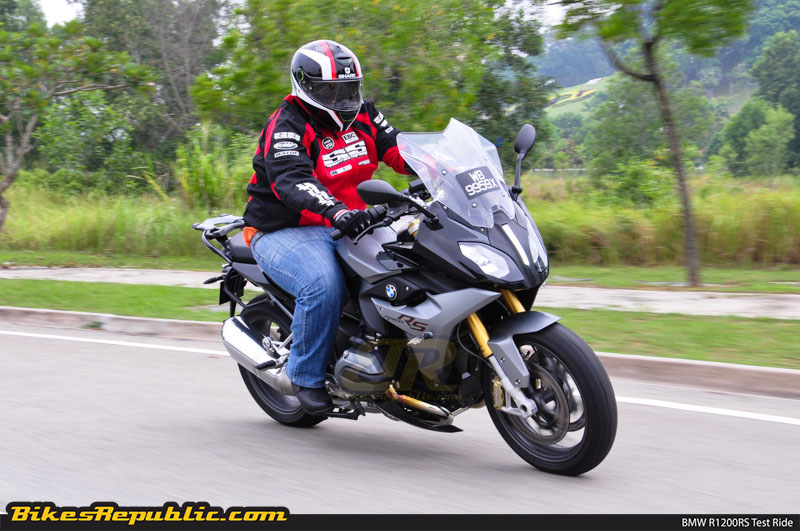 In terms of design, it is obvious that the guys behind the drawing board in Munich were looking to cater to the sportier side of the spectrum. From what we can see the R1200RS is nearly identical to R1200R, with the RS sporting a half fairing and two-way adjustable windscreen for better aerodynamics at speed. The highlight is of course, the symmetrical twin headlights, similar to the S1000RR and the S1000XR.

Our favourite feature on the RS was the bike’s exposed frame, which gives it a very radical and sporty appearance, unlike its predecessor which looked rather conservative. Complementing the sportiness is the wheels, as well as the massive exhaust pipe.

With a wheelbase length of 1,529mm, and seat height of 820mm, the R1200RS is a pretty bulky bike, but its dimensions make it ideal for both touring and inter-city riding.  It also features a handlebar setup that puts the body in a slightly more forward and lower position, but not one that compromises comfort, even for big-sized riders. 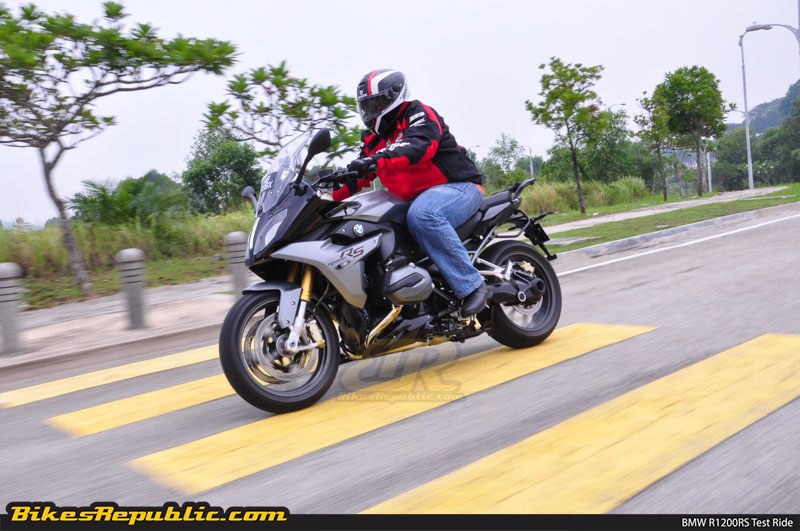 As much as the technical equipment is concerned, the R1200RS comes with shaft drive, an upside-down, 45mm Sachs telescopic fork up front, Paralever suspensions setup at the rear, Dynamic ESA , and a whole lot of the BMW electronics, including ABS, Automatic Stability Control (ASC) and two riding modes as standard.

Performance wise, the R1200RS’ engine has been tuned for more torque at lower rpm compared to other BMWs that use the same engine. So, we had to be gentle on the throttle as it was a case of ‘ask and you shall receive’. Regardless of whether we were overtaking in the city, or cruising on the highway, power delivery was just instant, and so seamless.

Adding to the smooth riding experience was the anti-hopping oil-bath clutch which had a light feel, and could be pressed with only two fingers. Upshifting and downshifting could be done effortlessly throughout our stint with the bike. Overall, the engine never showed any signs of struggling, and power was always present, inspiring us to push it further and have quite a bit of fun. 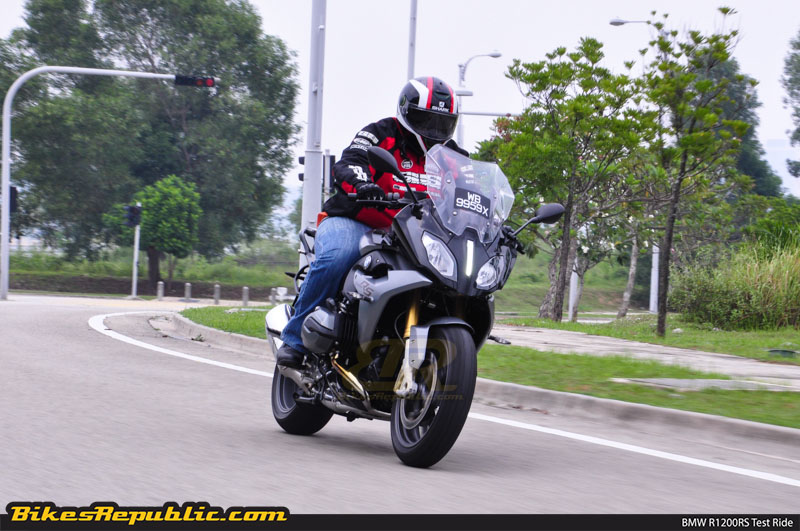 With two riding modes to choose from (Road and Dynamic), we were in Road mode most of the time,  which offered a much snappier power delivery and less intervention of electronic aids such as DTC and ABS. We also had the liberty of choosing between two damping modes – Road and Dynamic – where each was available in three spring preload selections (single rider, single rider with luggage, or two-up).

Braking duties were handled by dual 320mm discs up front squeezed by radially-mounted Brembo four-piston calipers, and a single 276mm disc squeezed by a Brembo two-piston caliper out back. Feel at both the front-brake lever and rear-brake pedal was exceptional, the front allowing for one-finger slowing most of the day. 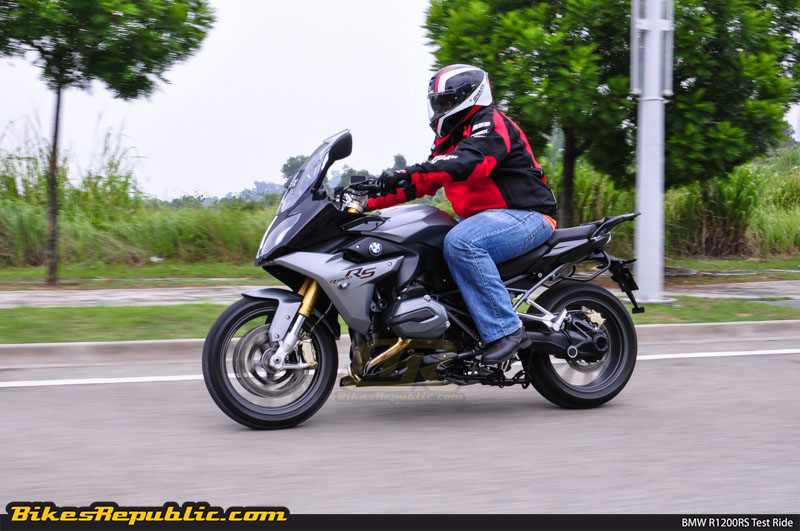 As good as it looked and performed, the R1200RS wins big in terms of practicality and convenience as well. One item that stands out on the RS is the new instrument cluster. It was definitely among the best there is in the market. Featuring a combination of both digital and analog readings, the TFT screen layout offered all the info we needed, and it could be customized to display different views as well.

Adding to convenience was the keyless system, which allowed us to keep the key-fob in the pocket at any given moment, even when we needed to start the bike, or to unlock the handle or popping open the gas cap.

And as for fuel capacity, the 18-litre tank allowed us to clock about 300km before the fuel warning indicator lit up.  In terms of consumption, the R1200RS returned an average of 24km/l, which was more than what we had expected.

In all, the R1200GS is more than just a fairing-equipped R1200R. Thanks to the small, yet significant changes such as the slightly longer wheelbase for touring stability, the handlebar, and the tweaked engine, it definitely has its own distinct characteristics.

It does not only offer the same level of performance as a sports bike, but does it without sacrificing comfort and practicality. Complemented by the sporty looks, the R1200RS is a dream come true for those who have been longing for a proper sports tourer.