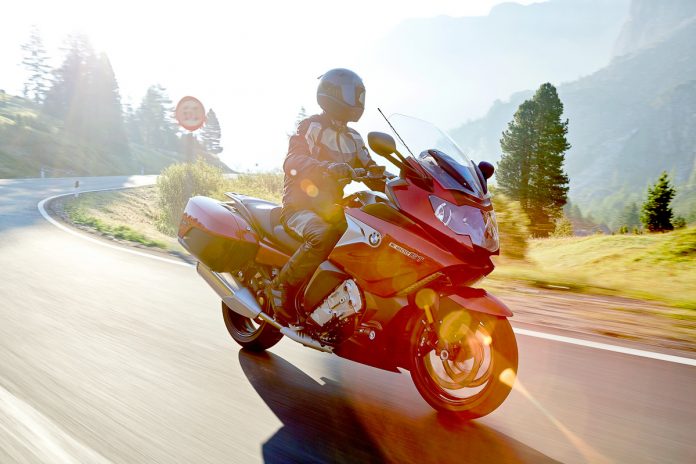 BMW Motorrad Malaysia today introduced the new BMW K 1600 GT, a powerful and luxurious motorcycle created from the ground up as the ultimate touring machine and continues the BMW Motorrad DNA of “Making Life a Ride”. 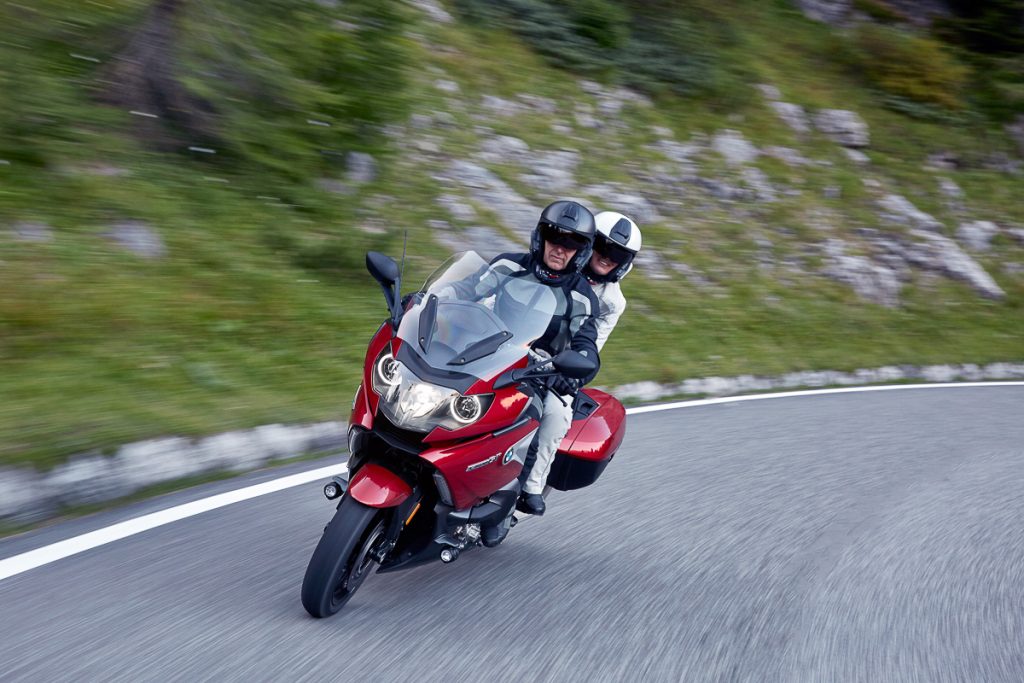 Apart from the new upgrades for improved touring capabilities, the new BMW K 1600 GT also features more optimised ergonomics for the footrests, seating areas, and handlebar positions – all of which engenders a more active seating position whilst retaining unmatched comfort.

Introducing the new motorcycle, Mr. Han Sang Yun, Managing Director & CEO of BMW Group Malaysia said, “Six-cylinder in-line engines have been an integral part of the history and brand identity of the BMW brand for over 100 years since the invention of the BMW IIIa airplane engine. BMW Motorrad has succeeded in skilfully transferring this tradition to the premium motorcycle industry with the BMW K 1600 GT having the lightest and most compact six-cylinder in-line engine for motorcycles with a capacity of over 1,000 cubic centimetres.” 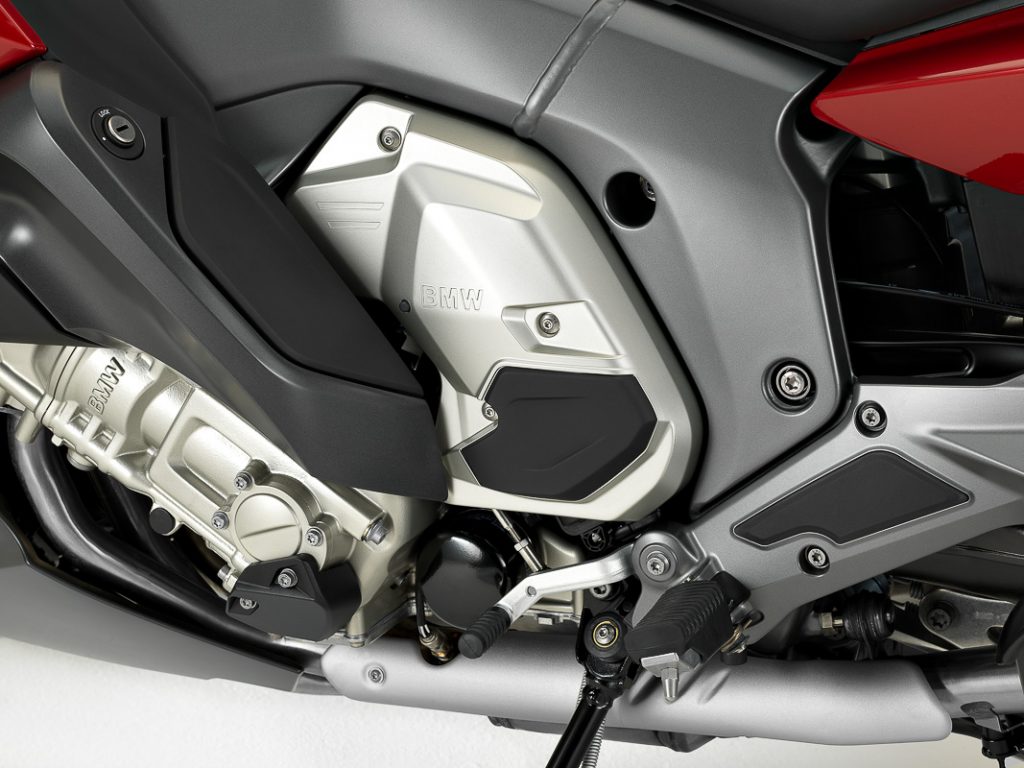 Armed with the most compact six-cylinder in-line engine in motorcycle series production to date, the new BMW K 1600 GT brings to life BMW Motorrad’s expertise in automotive engineering. A supreme forward thrust coupled with abundant torque and smooth riding are assured with the power unit’s impressive output of 160 hp at 7,750 rpm and a maximum torque of 175 Nm at 5,250 rpm, the highest in its class. 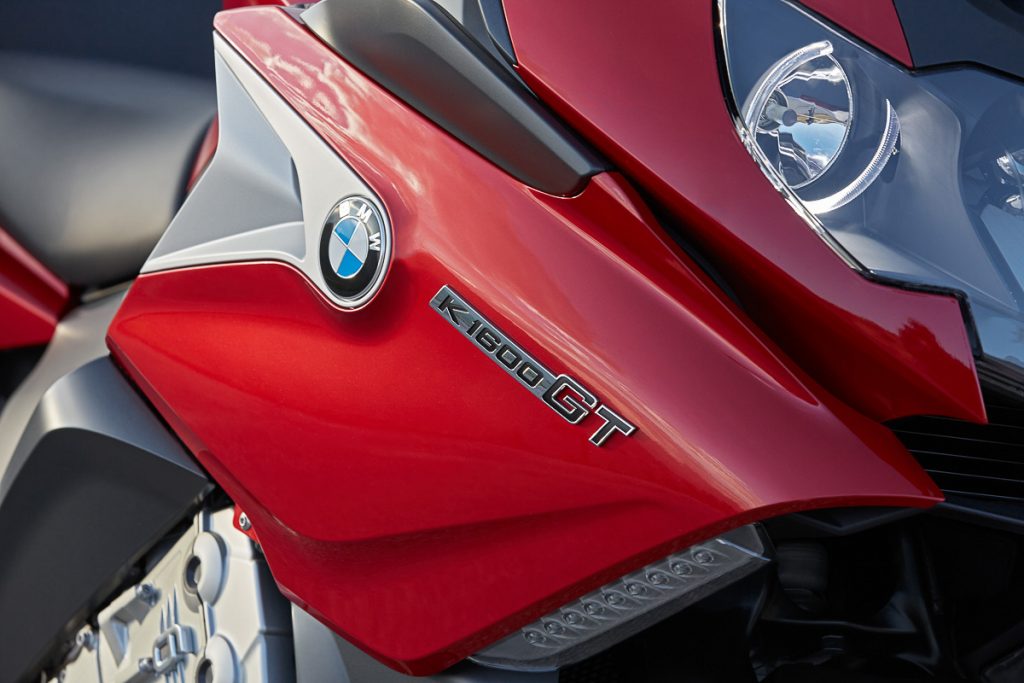 Designed to meet the requirements of the EU4 pollutant class, the new BMW K 1600 GT features a new engine mapping, a fuel system with carbon canister for fuel tank ventilation and an exhaust system with altered catalytic converters. Additionally, the dynamically designed end pieces with horizontal ribbing lend even great emphasis to the six-cylinder theme. 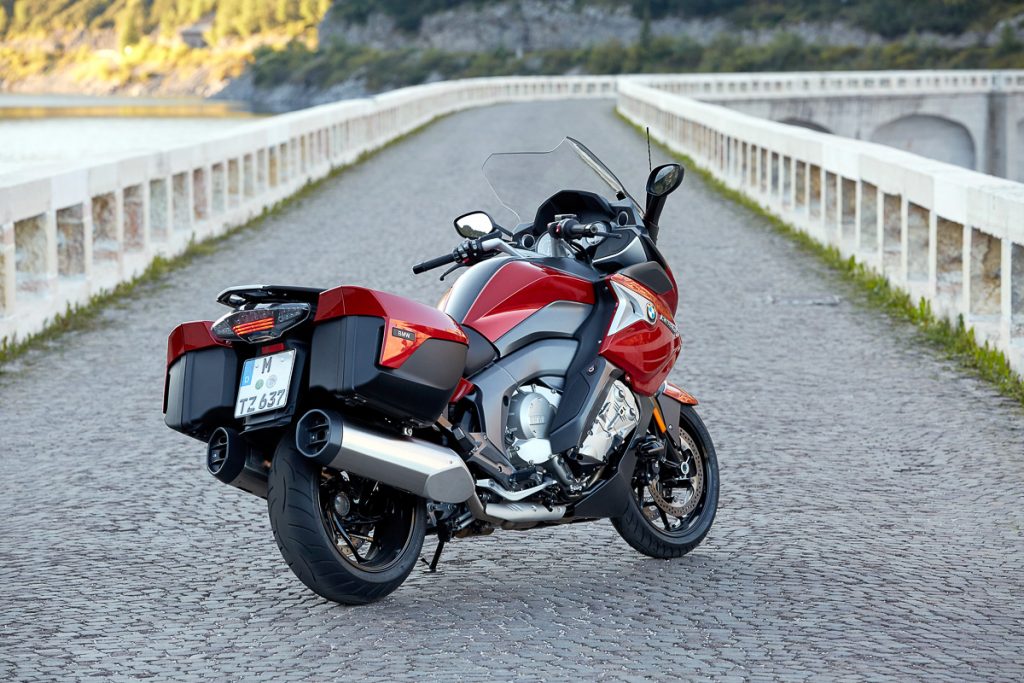 In its continued pursuit to elevate the standards of bike riding, the new BMW K 1600 GT is equipped with the new Reverse Assist function which provides enhanced manoeuvring moving backwards. Conveniently engageable at the press of a button on the left handlebar panel, the Reverse Assist when activated instigates the blocking of the forward gear and consequently the activation of the reverse gear. Motion itself is resultant of a propulsion via a bendable shaft which is triggered when the rider presses the starter motor button. 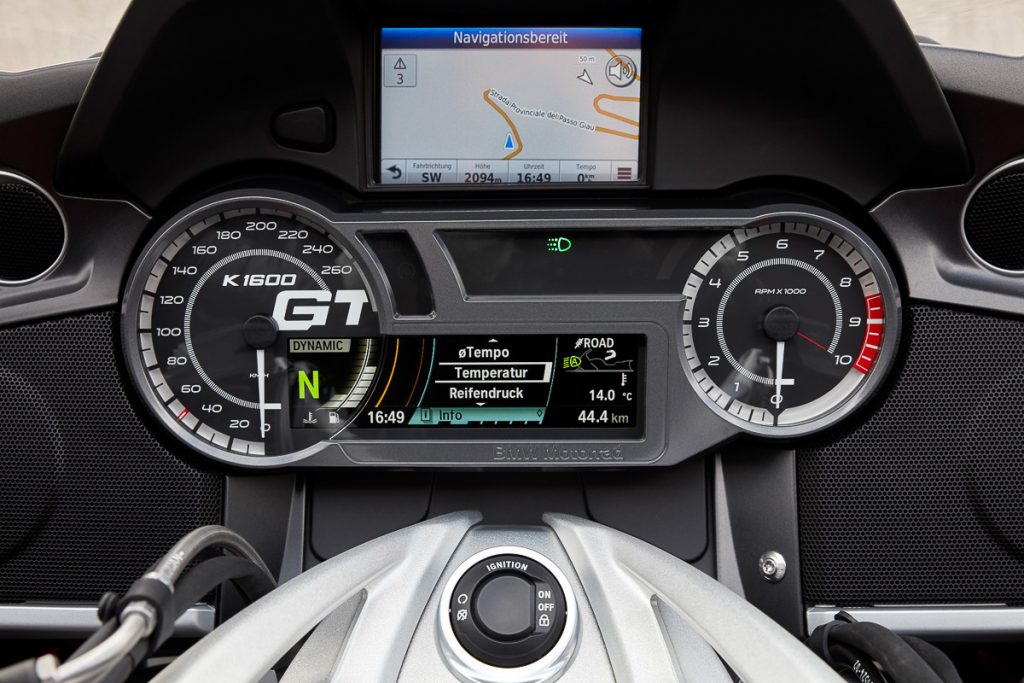 As a standard, the new BMW K 1600 GT offers three riding modes – “Rain”, “Road”, and “Dynamic” – which can be directly activated at the press of a button strategically located on the right-hand side of the handlebars, thus enabling the rider to adapt the motorcycle to different riding needs and conditions including road touring, riding on wet surfaces as well as sporty and dynamic touring. To maximise safety, each mode is individually coupled with the Dynamic Traction Control (DTC), allowing for increased precision in traction control.

Shift Assistant Pro for shifting up and down with ease 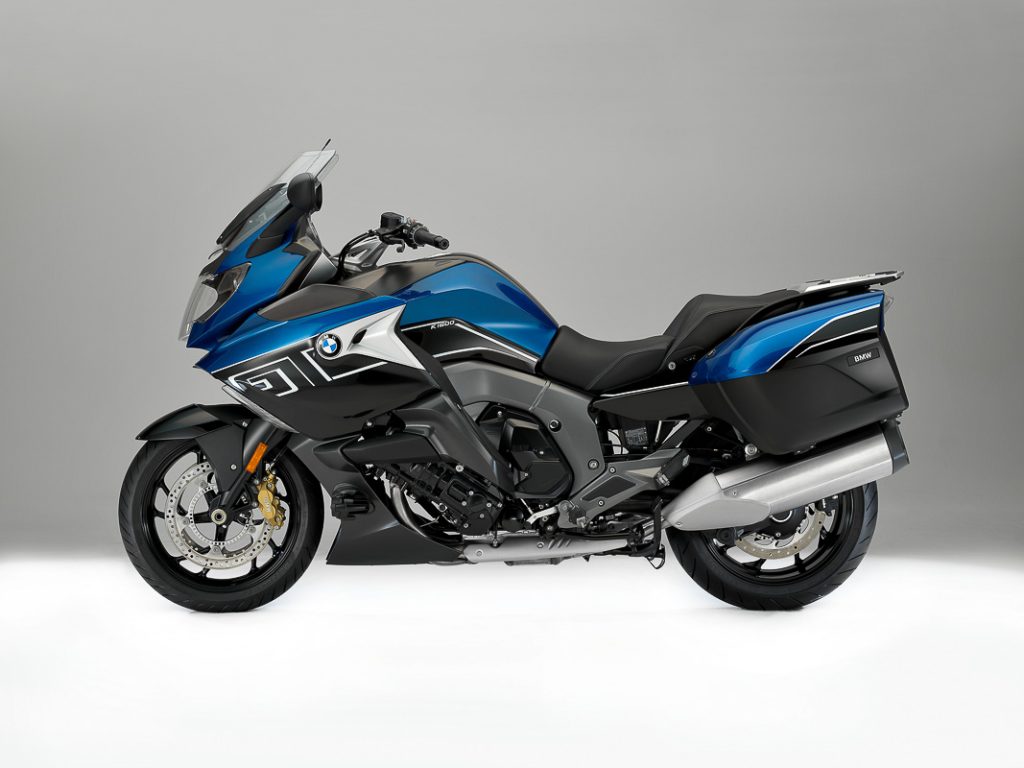 Now fitted with the Shift Assistant Pro, the new BMW K 1600 GT enables the rider to shift up and down without engaging the clutch or throttle valve in the relevant load and engine speed ranges. As most shifting can be achieved using the shift assistant, the summative effect is not only enhanced comfort for the rider but an elevation in dynamic performance. With the Shift Assistant Pro, shift time is significantly reduced in comparison to a gearshift using the clutch. Also, the throttle valve no longer has to be closed for shifts using the throttle grip during acceleration. As a result, propulsion power is essentially constant without torque interruption. Meanwhile, engine speed is automatically adapted through double-declutching when decelerating and shifting down (throttle valve closed).

While the Shift Assistant Pro can support the rider on virtually all shifts, there is no shift support when the clutch is activated, when shifting up with the throttle grip closed or when decelerating. 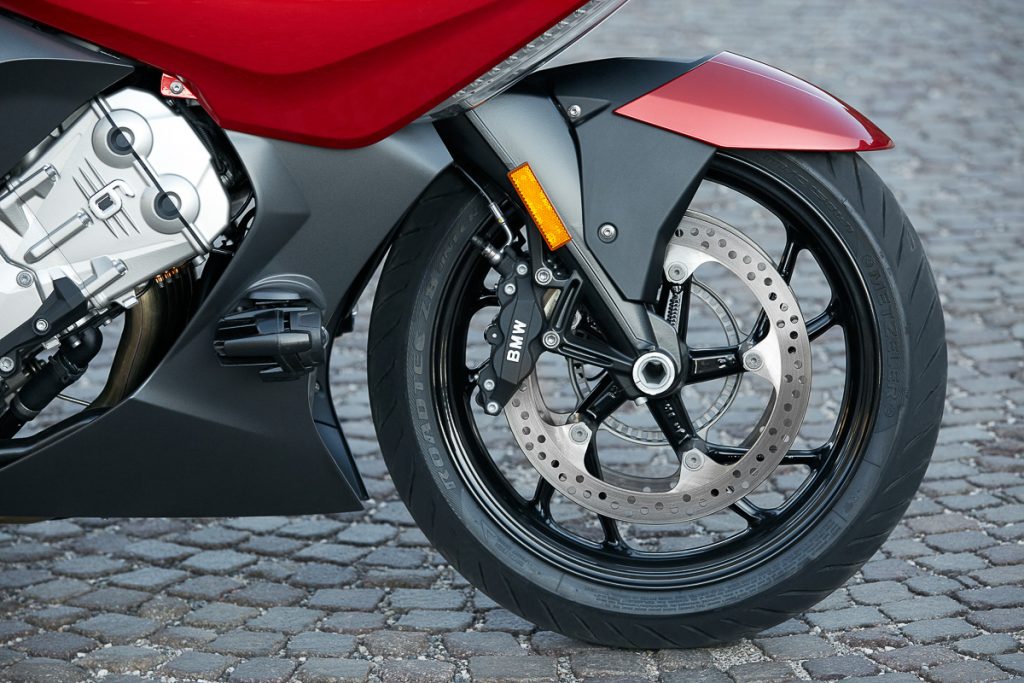 Equipped with Dynamic Electronic Suspension Adaptation (ESA) with adjustment settings of “Road” and “Dynamic”, the new motorcycle promises a more comfortable and improved riding as compared to the predecessor model. In the default “Road” mode, damping adaptation is fully automated across the entire range for maximum comfort as well traction over essentially all surfaces. The result is an optimum damping force in all riding states regardless of load. Meanwhile, the “Dynamic” setting activates a tighter damping set-up.

Exceptional damping comfort coupled with a stable ride response are ensured by the damping precision singular to the BMW K 1600 GT. Using various parameters, different riding states can be accurately identified to inform the damping forces required. What follows is a near instantaneous adaptation of the damping forces of the front and rear spring strut to deliver unparalleled comfort even in banking position. 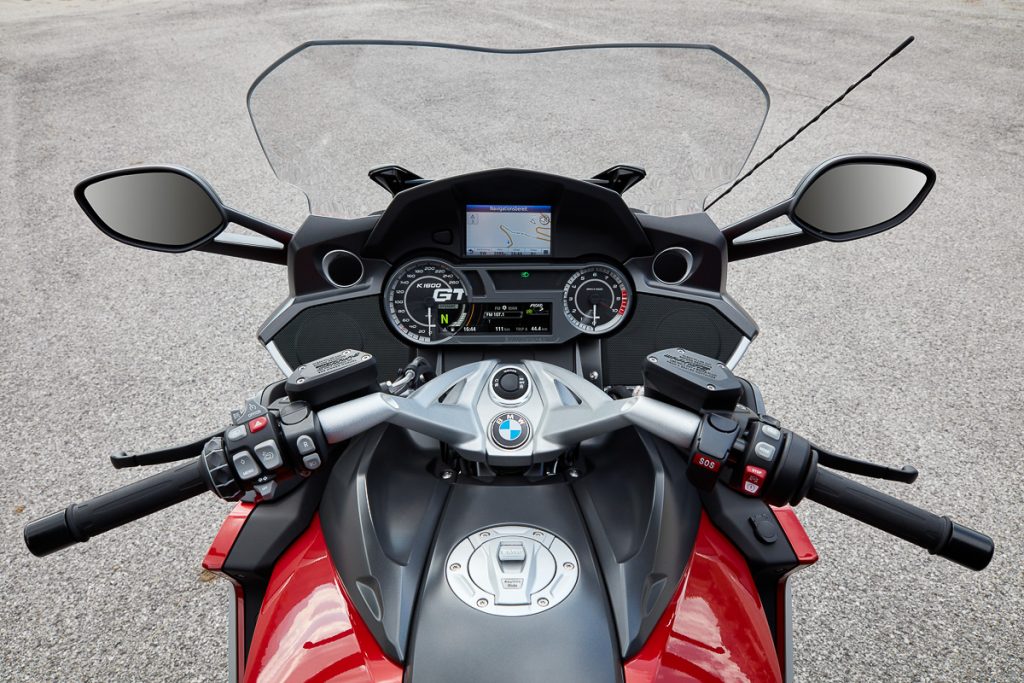 Riders can now start the new BMW K 1600 GT with an igniton button or via a transponder as backup. Through the transponder, the motorcycle can be started or unlockedwithout the need of placing a key in the ignition for comfort access. Additionally, the Hill Start Control enables easy ascension onto upward slopes. The new feature helps maintain the forward thrust needed to climb upwards even if the rider releases the brake levers. 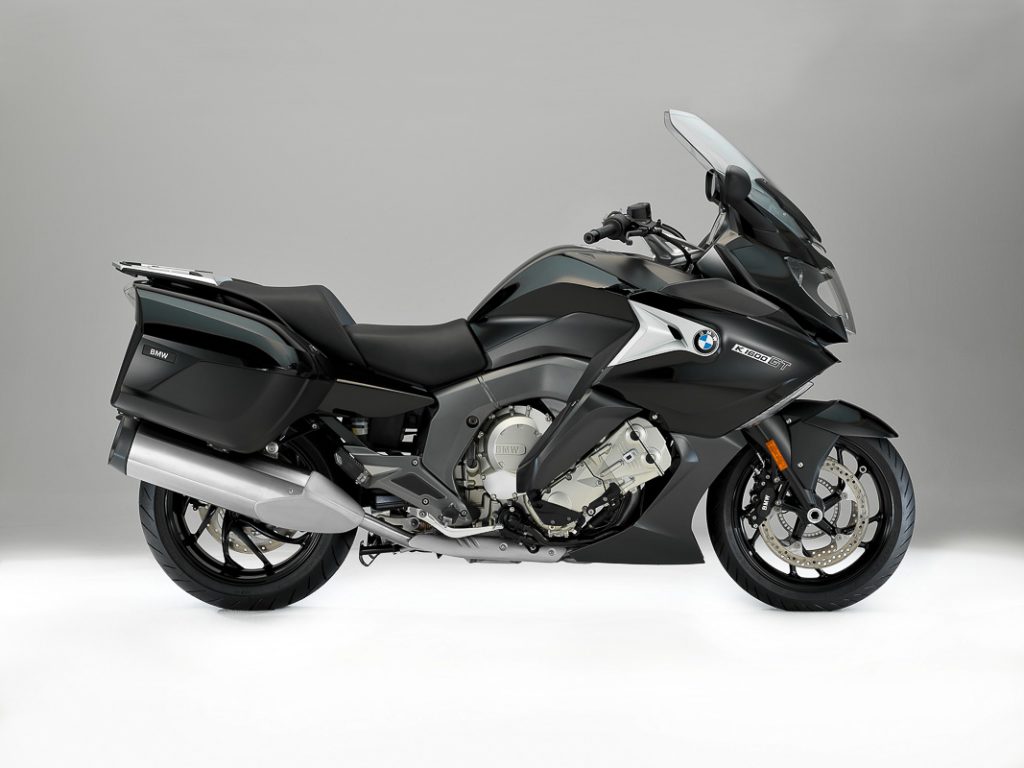 The new BMW K 1600 GT allows the rider to share in its ethos of an active and dynamic performer through a selection of new colour schemes. The Black Storm Metallic and Mars Red Metallic accentuate the technical components as well as the agile character of the motorcycle.

Meanwhile, the Lupine Blue Metallic finish conveys the dynamic capabilities of the new BMW K 1600 GT with a drivetrain finished in black. The image of a dynamic touring bike is made complete with golden brake calipers and a smaller “Sport” windshield.