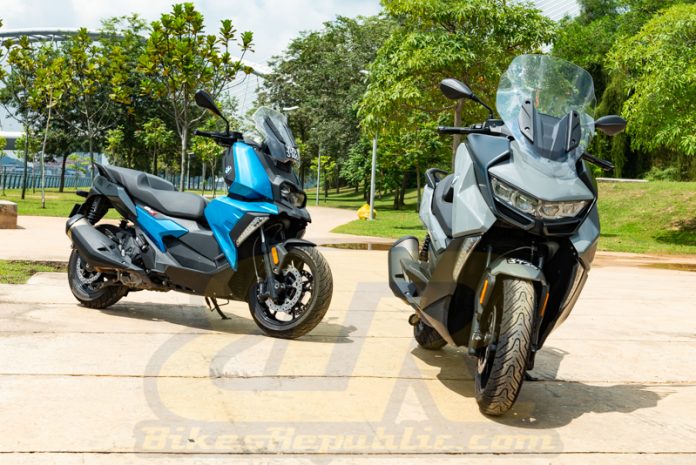 Now, this dynamic duo are really different in almost every single way. Hear us out.

BMW Motorrad calls their scooters “Urban Mobility.” The C 400 lineup are the smallest of the C-series which includes the larger (and faster) C 650 range.

Both are powered by the 350cc, single-cylinder engine which produces 34 bhp at 7,500 RPM and 35 Nm of torque at 6,000 RPM. Power is sent through a  centrifugal clutch and finally a stepless CVT transmission. 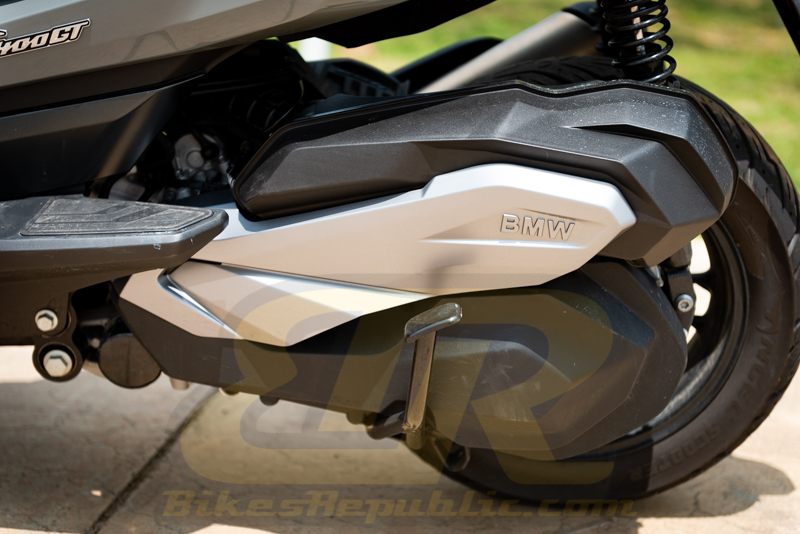 The forks are 35 mm units with double spring struts at the rear. But there are two 265 mm brake discs up front and one at the back. Wheelbase is a slightly long 1565 mm. ABS and ASC (Automatic Stability Control i.e. traction control) are standard on both bikes.

The TFT can connect to your phone and Bluetooth communicator. 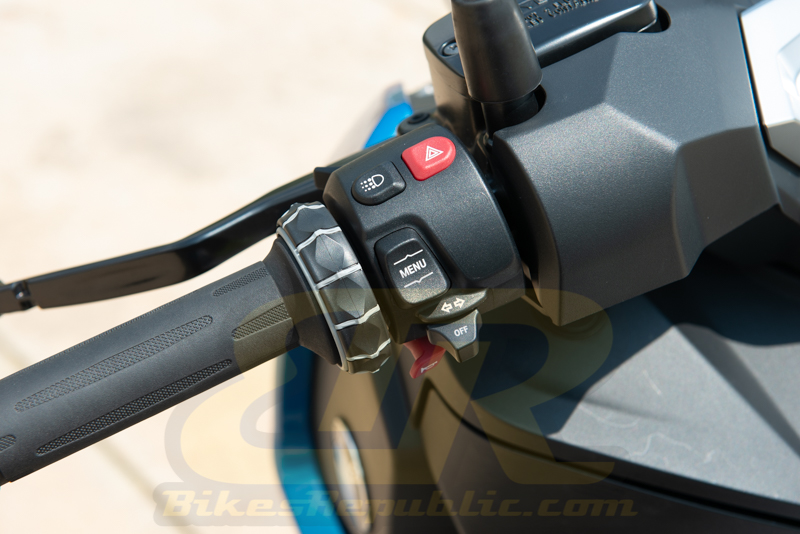 This is where it gets interesting.  You can have navigation on the TFT screen when connected to the BMW Connect app on your phone, showing you turn-by-turn directions.

Switching to the multimedia screen, you can see the music that’s playing through it. From there, you could use the multifunction wheel on the handlebar to play, pause, choose the song, and even playlist. Only problem was we couldn’t get the karaoke function to work. Just kidding. 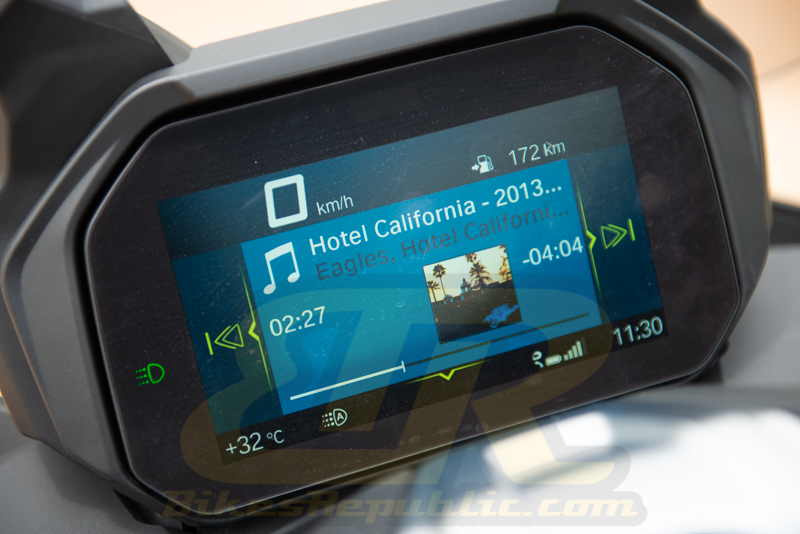 Now flip it to the phone function and you’d see your phone’s contacts. Select the person you want to call and voila. 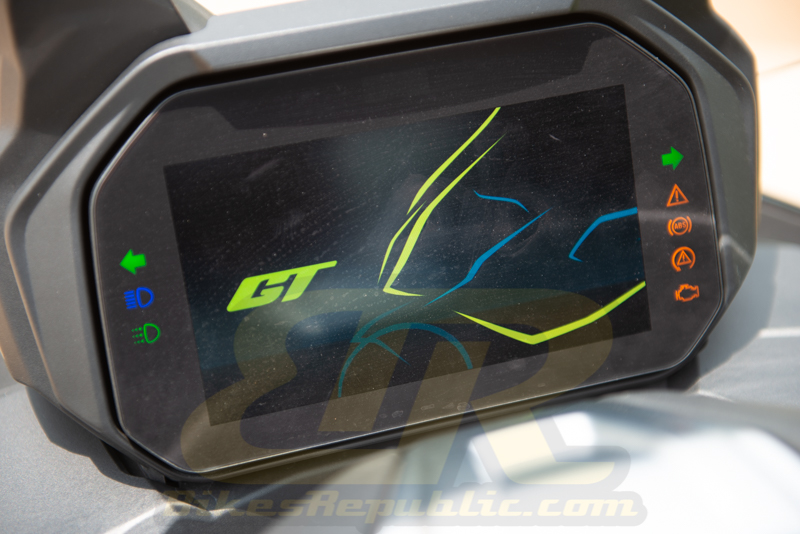 Sure, these functions are available on bigger bikes, too but no other scooter outside of BMW’s line-up do. 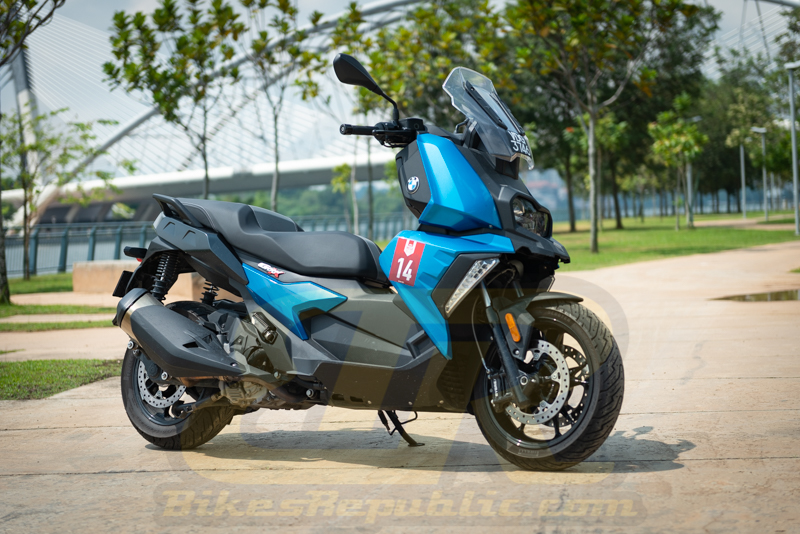 The C 400 X is designed for daily commuting. That explains its distinctive “cut down” look for easy manoeuvring through city traffic and narrow streets.

Compared to the C 400 GT, the “X” has a flyscreen, thinner seats and minimal bodywork. The headlamp looks similar to the R 1250 GS’s while the  tail section looked like it was tacked on although it shares the G 310 R’s design. 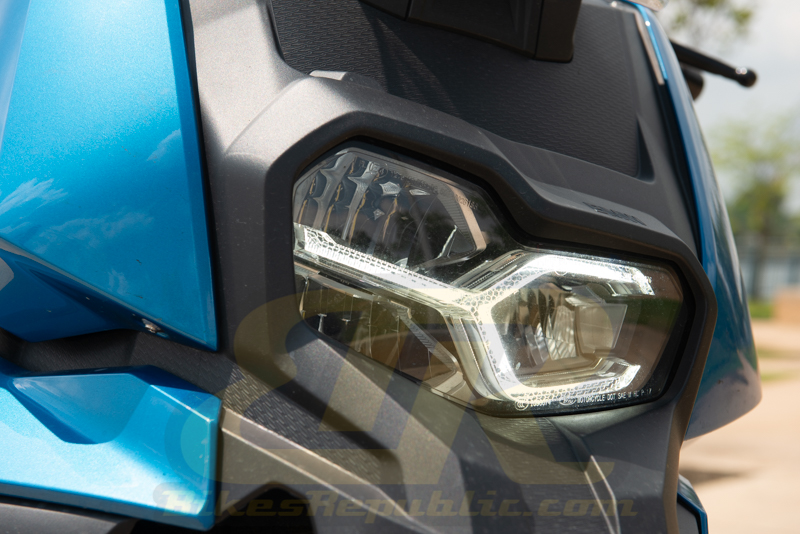 It weighs 204 kg fully fuelled and ready to go. But it could still carry 201 kg of payload! That means if you and your passenger weigh a total of 150 kg, you could still load 51 kg of luggage onto the bike. What is this? A GS?

But it’s a scooter, right? Yes, until you ride it. 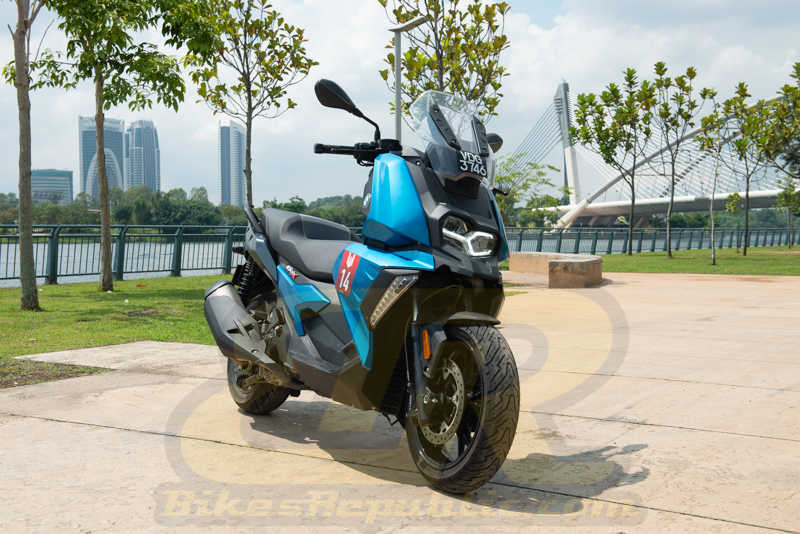 Twisting the throttle the first time, I gave it a wristful like I would on other scooters and small bikes. The bike just took off down the road so fast I thought I was going to blow past the intersection and into the Oldtown White Coffee’s lobby up ahead. Whoa boy!

A two fingered pull on the front and rear brakes brought the bike to a complete stop as quickly as a big bike on Brembo brakes. I kid you not. 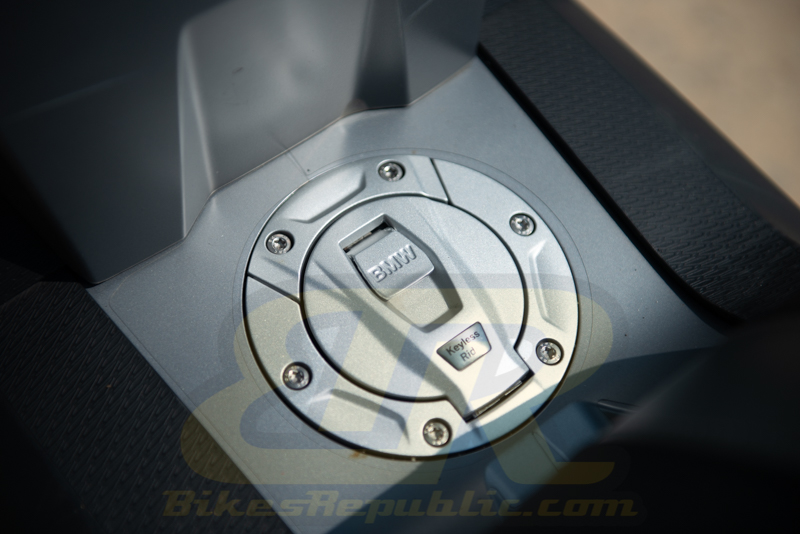 Approaching the sweeper after the fire station at Cyberjaya, I slowed well down as I feared that the handlebar may wag back and forth, besides grounding the bodywork like on other scooters. Surprise, surprise. The handlebar stayed steady as if it has a steering damper (it doesn’t) and there was a huge amount of ground clearance left.

So, I gunned it into the next left-hander which led to highway at much higher speeds. The bike’s low CG-long wheelbase combination actually let the bike hold its line and truly railed through. Again, the handlebar stayed steady. It was as if I was riding a conventional big bike. 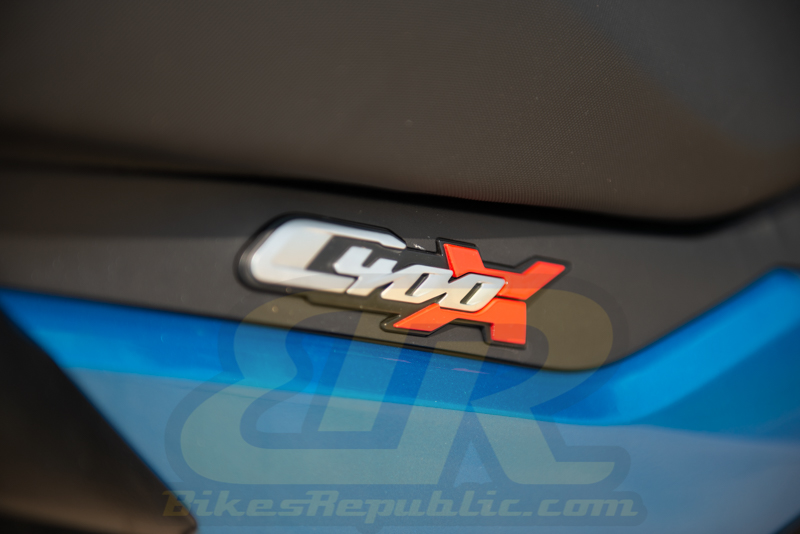 We had the opportunity to ride both bikes to a camping trip organised by GIVI Asia (Malaysia) the next day. Running on the highway to GIVI Asia;s HQ at Bukit Beruntung, the C 400 X ran at 130 km/h without feeling like it was going to throw out the piston and rod through the footboard, despite its quoted top speed of 139 km/h.

Y-suku (Yamaha Y15ZR) riders tried to give chase but they soon gave up. 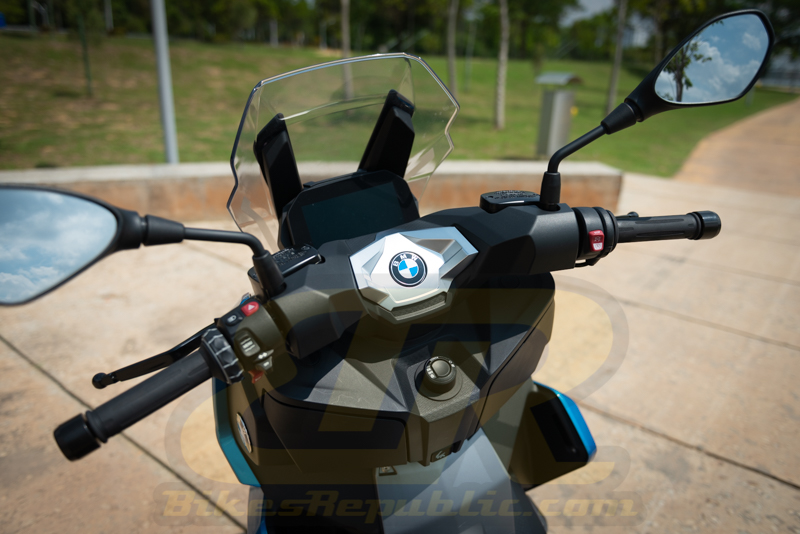 The engine was very economical too, still leaving 2/3 of the 12.8-litre fuel after that 63.3 km blasting.

It was a 137 km ride from GIVI Asia’s HQ at Bukit Beruntung to Lata Lembik in Pahang. Part of the route covered Batang Kali from Ulu Yam Lama to Gohtong Jaya, before descending back down to Genting Sempah. From there it was on the Karak Highway, then through Bentong. 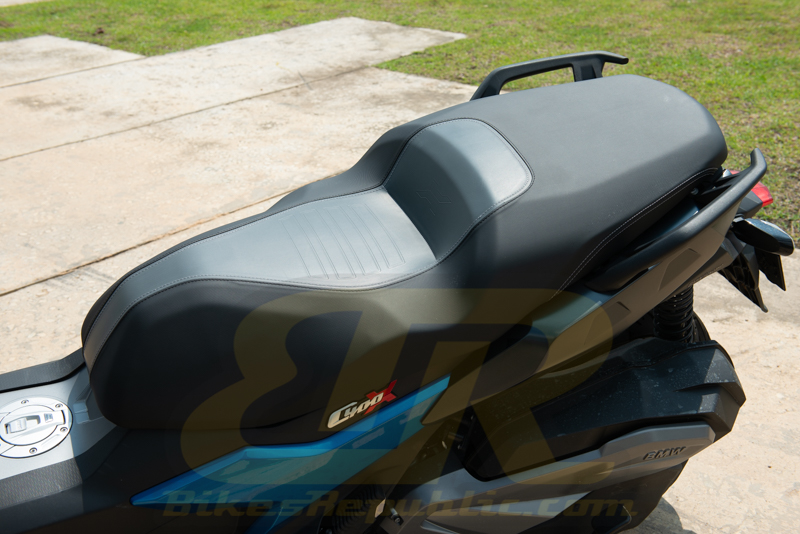 My colleague Amirul was ahead on the C 400 GT, riding with pillion.

Heading up Batang Kali, both of us were constantly snapping at the back wheels of the bigger bikes up ahead. The road was wet but both of us C 400 riders just kept up the pace. 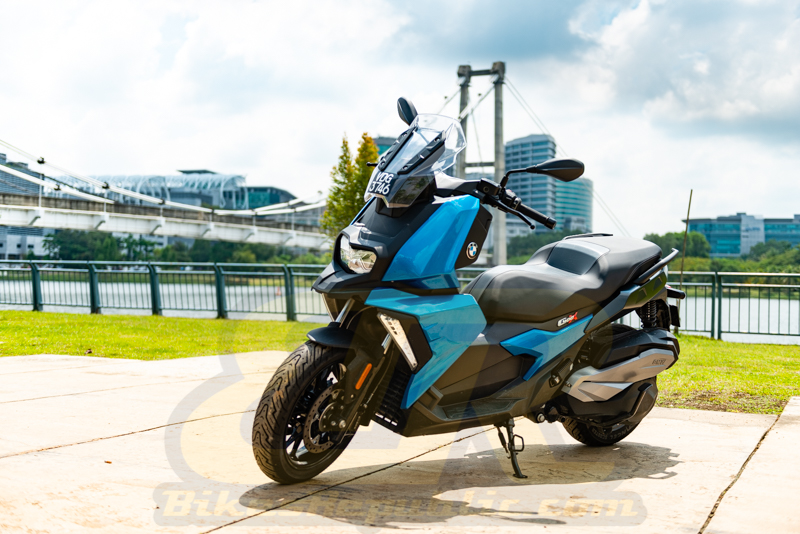 And we still had 2 out of 10 bars of fuel left  when we reached our destination. 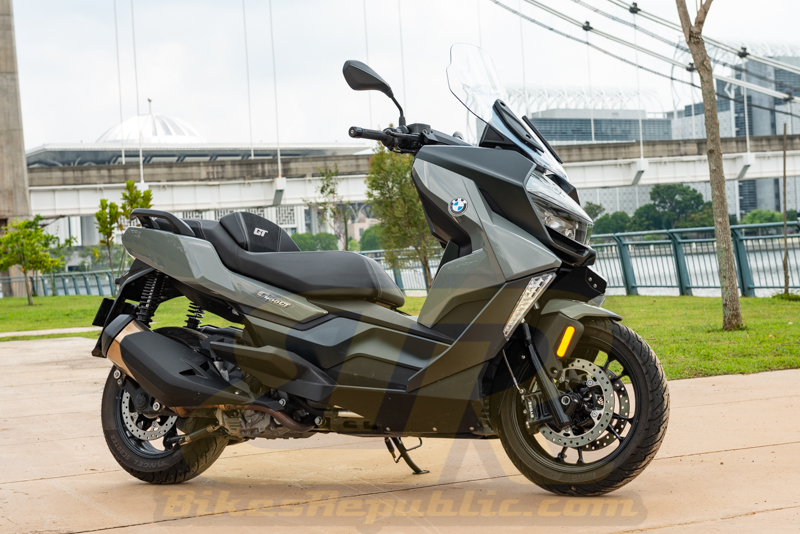 We switched bikes later in the week.

It takes on the maxi scooter style for touring, hence the “GT” designation. You get a larger bodywork, and larger and taller windshield for more protection from the elements. The headlamp and taillamp were just as distinctive as the X’s although styled differently. 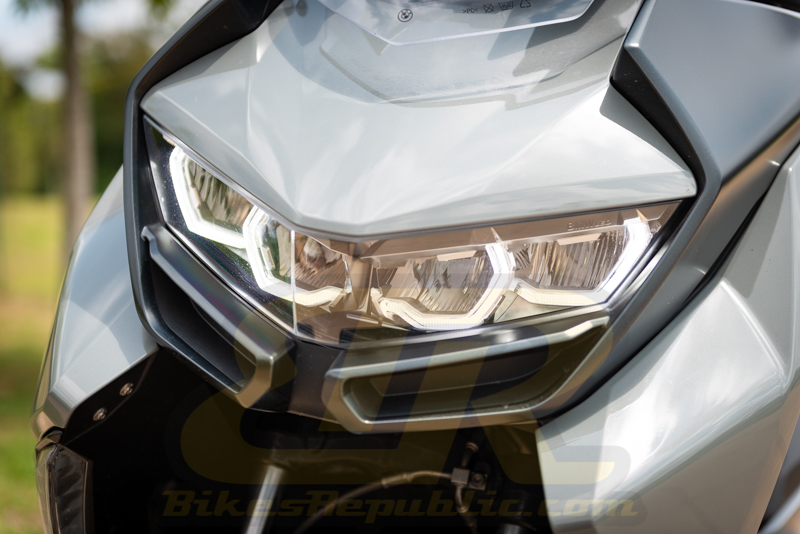 The seats were felt a little wider and taller due to extra padding. The front panel was style differently and had two lockable cubby holes just like the X’s. There’s a USB connector inside the left compartment for charging devices. 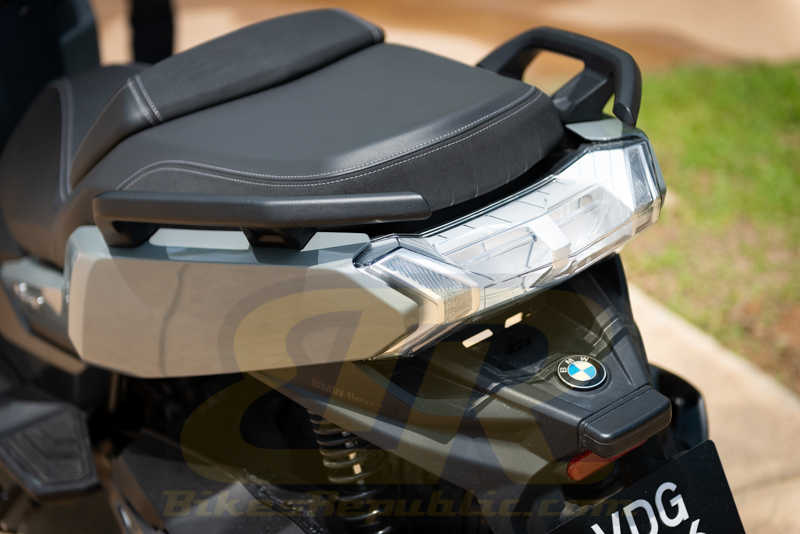 The extra bodywork brings it wet weight to 212 kg, but maximum permissible payload increases to 203 kg. 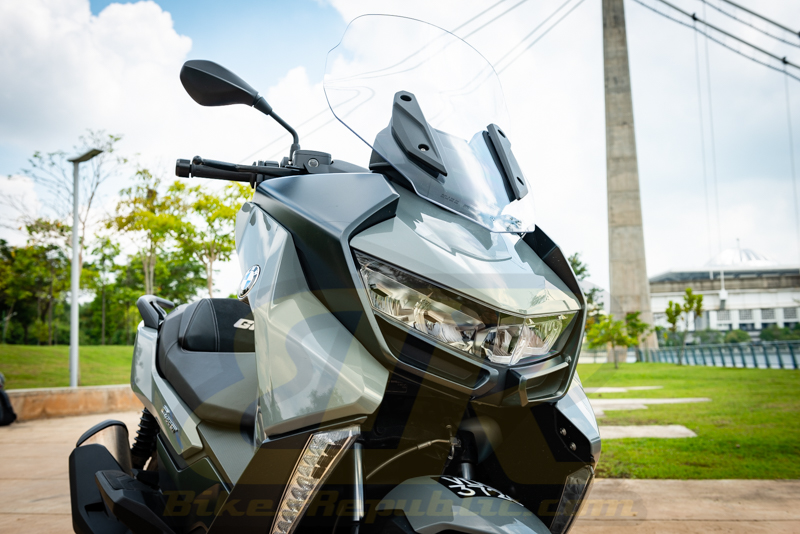 That’s a far as the difference goes between the two bikes, the rest are based on a shared platform. 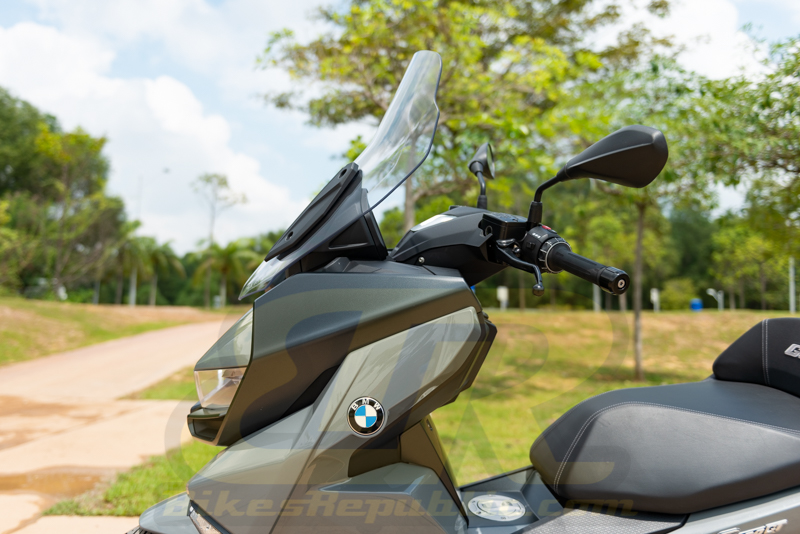 The GT has a taller seat height due to the taller seat but I liked the extra comfort it afforded. Riding it out the first time, the lack of windblast was immediately discernible. 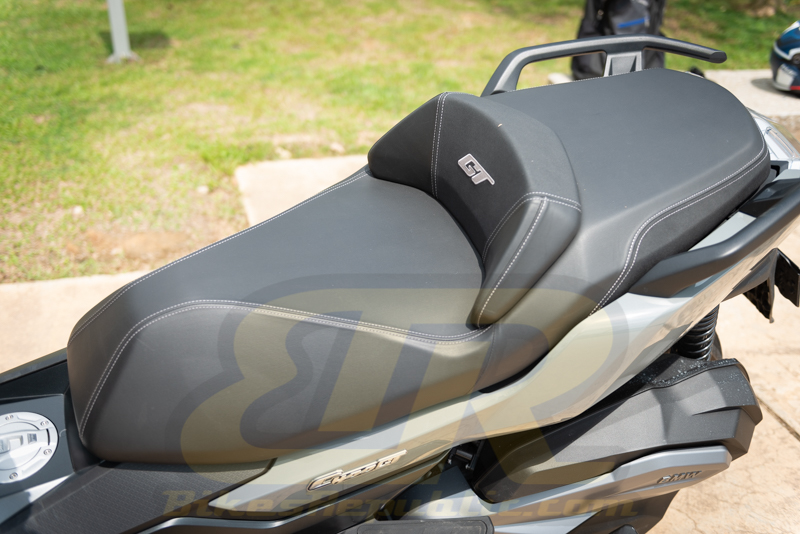 But the bike still hoots down the road like the X. The extra comfort was especially appreciated when riding the 60 km daily commute as I didn’t get buffeted by the wind. The windshield was great at stopping rain and water splashed off other vehicles in front. 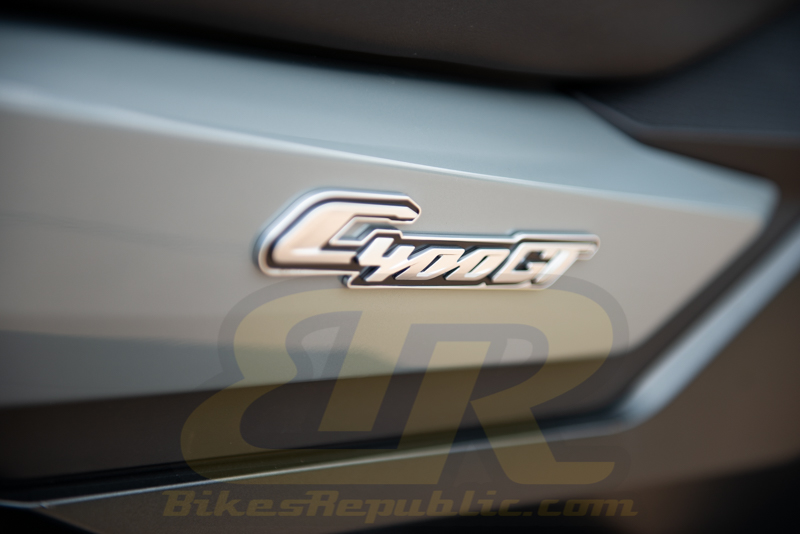 The GT’s handling was slightly different to X’s due to the higher seat.  Although it still tracks through corners, the handlebar did wag around. But as long as the bike headed to where I pointed it, I wasn’t concerned.

The only shortcoming was storage space under the seat. In order to keep the seat low and body narrow, the underseat compartment was shallow. Yes, you could place two jet-type helmets in there, but you couldn’t lay down a laptop backpack. Ah well, a top case will cure this. 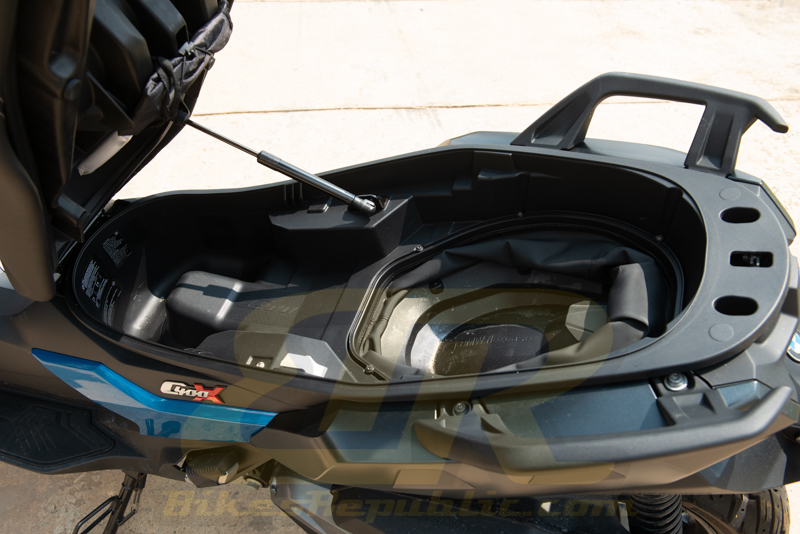 Another thing was you have turn on the ignition in order to open the forward storage compartments and seat. We know it was designed as so in the interest of safety, though.

They ain’t exactly cheap but if you are the type who loves scooters, they are truly worth your hard-earned money.

We loved the C 400 X and C 400 GT. Both actually surprised us at how good they were as scooters… er… Urban Mobility vehicles. Maybe that’s why BMW Motorrad doesn’t call them scoots. 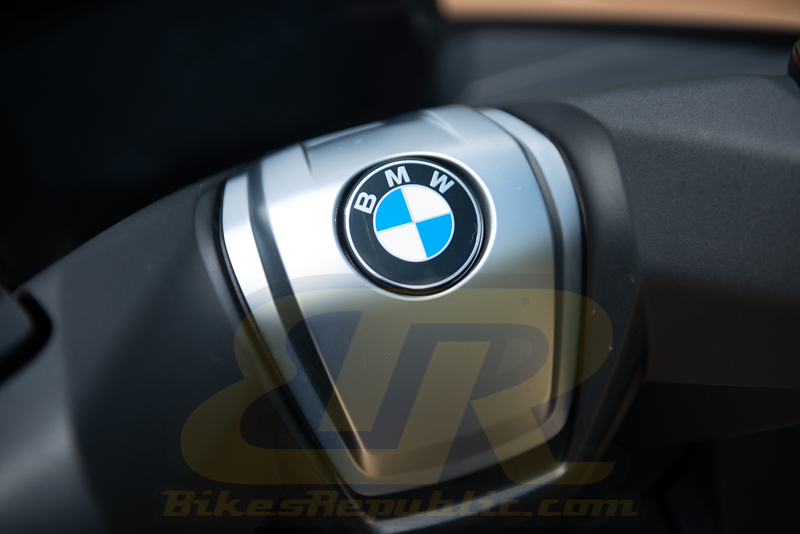