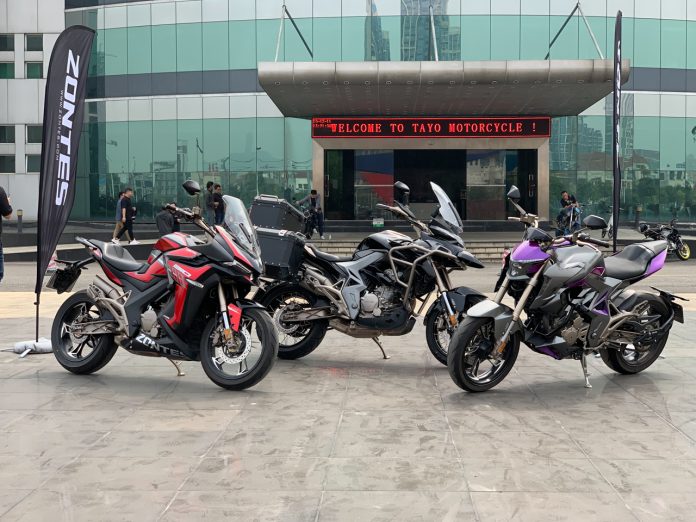 As you know, Zontes is now making large waves in the Malaysian market.

We’ve been exposed to hundreds of bikes in our journey and can attest that Zontes motorcycles looked to have very high quality in terms of built and finishing.

Anyway, in order for us to witness that the bikes weren’t built in some small shed, Zontes Malaysia us at BikesRepublic.com and official dealers to the factory in Guangdong, China.

Purpose of the Visit

We guessed the main purpose was to put the jitters for another Chinese motorcycle brand to rest. 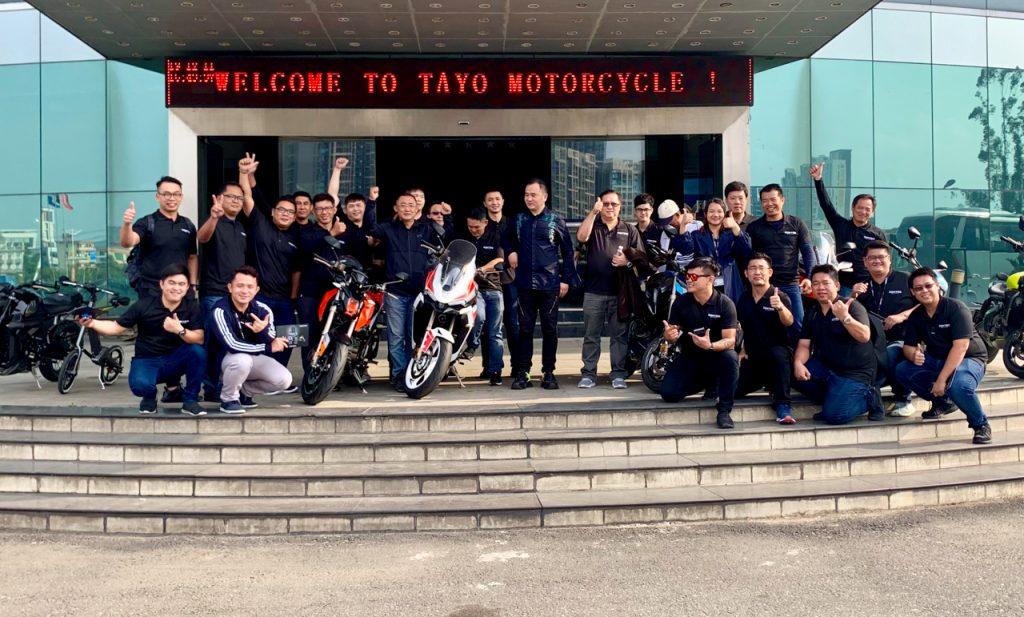 There were many upsets in the past with certain Chinese motorcycle brands. Many of our readers raised concerns about the quality, reliability, technology, aftersales service and availability of parts. Some of them experienced the difficulties firsthand. But truth is, the dealers suffered too from dissatisfied customers who came in droves.

Will Zontes change this?

Zontes is the flagship brand produced by the Guangdong Tayo Motorcycle Technology Co., Ltd. It is currently sold in many countries around the world including Thailand, Philippines, Indonesia, India, the Americas, South Africa and all over Europe including France and the United Kingdom, accompanied by rave reviews. The momentum is still picking up. 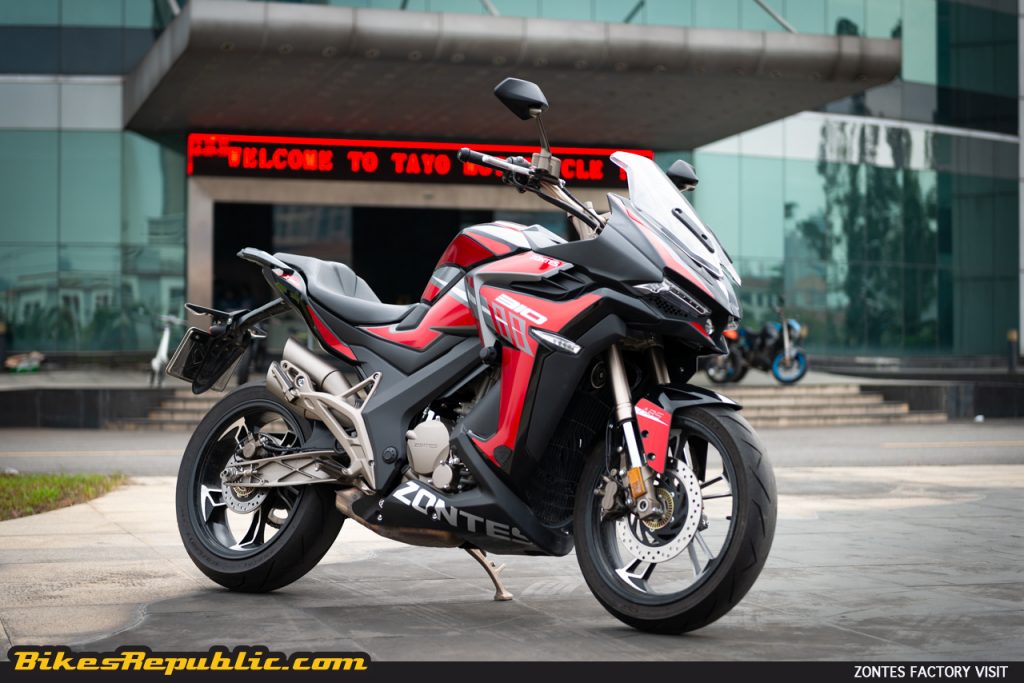 The quality and features we saw on the three bikes during the launch rivalled the best of the major manufacturers. However, there’s no substitute other than seeing how they were made.

Arrival at the factory

The staff had set up a row of models at the foyer to welcome us. There was a prototype and a couple of electric mopeds, too. 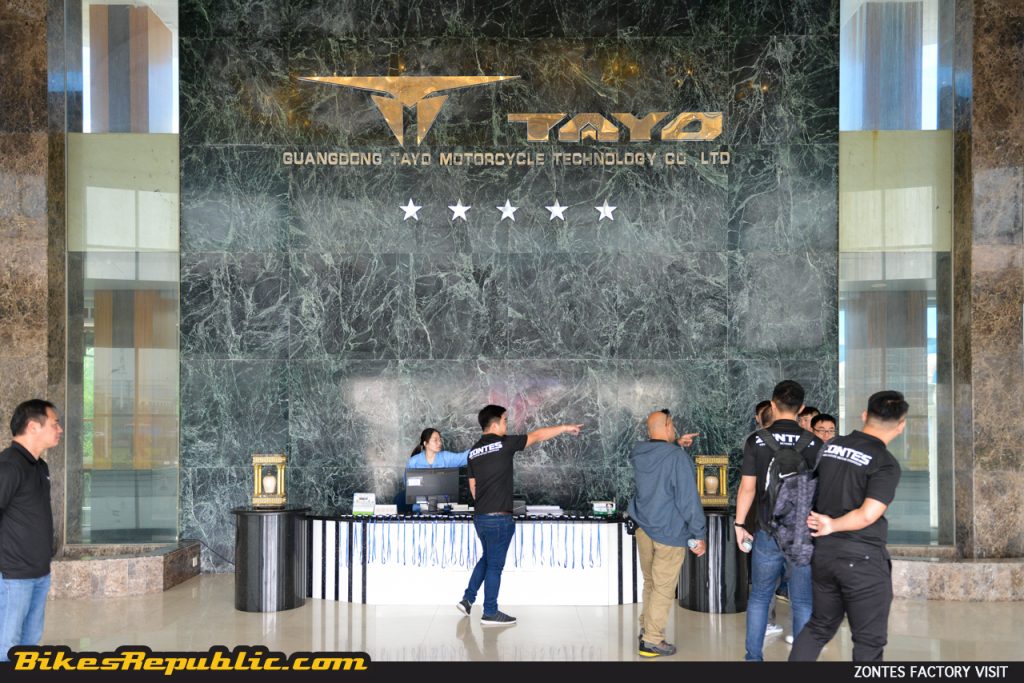 Before we entered the factory, the staff handed out sheets containing small stickers to cover the front and rear cameras on our phones. I was instructed to leave my DSLR at the reception.

As we approached the entrance into the factory, we were surprised to find a white sliding door right out of Star Wars. 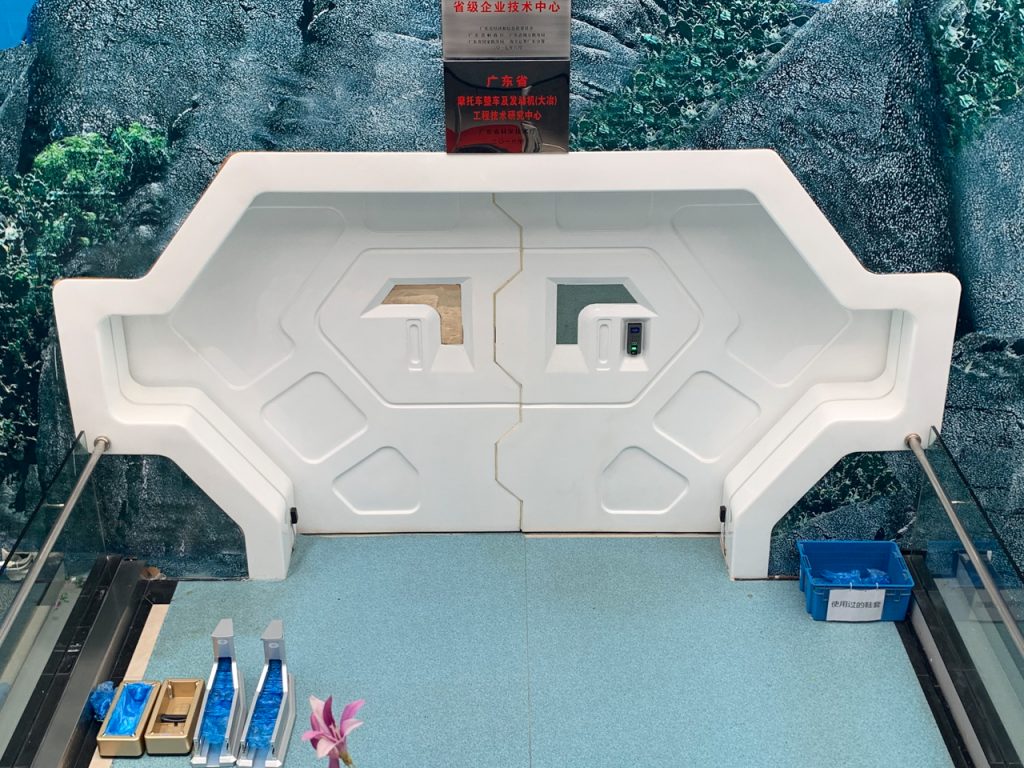 We slipped on plastic covers on our shoes and face masks before entering. 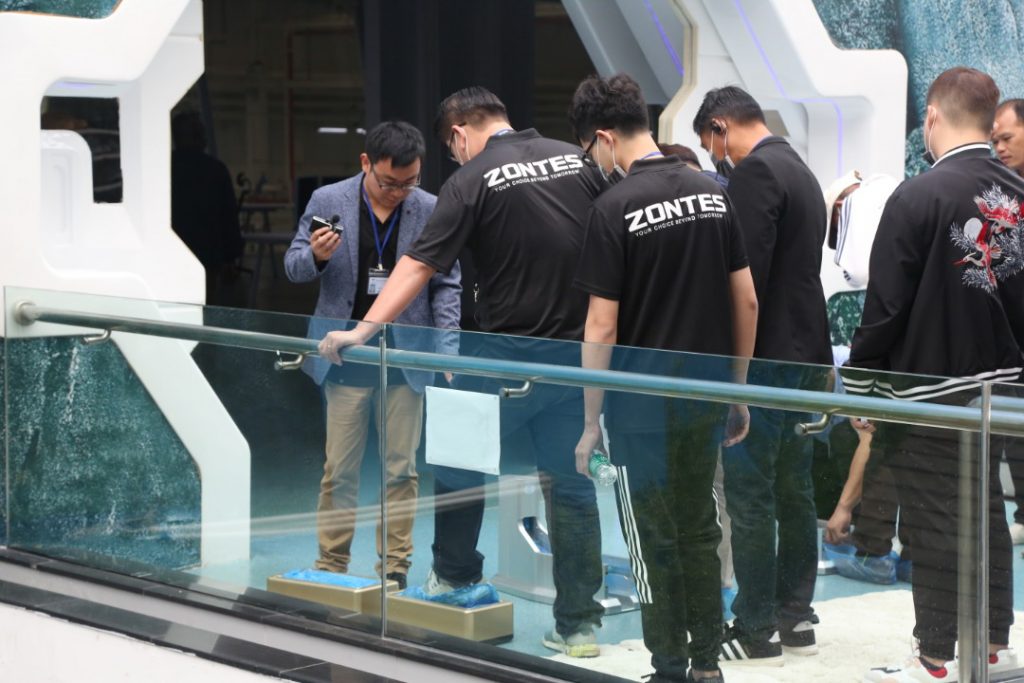 Rows upon rows of computer terminals greeted us on the right, while a row of clay mock-ups were on the left. These were the design and R&D departments.

The guys were working on the full-sized clay mock-ups of a couple of scooters and road bikes. Huge posters of design sketching hung on the wall in the background. Clay models make it easy to visualize and alter the final design.

There were also clay mockups of previous models sitting in the corner. Tens of them!

We passed the design department on the way down to the factory floor. We saw the designs for future Zontes models, and they were just as bold – if not bolder – than the current models. The company also has plans for 600cc to 1000cc Triples and inline-Fours.

As we headed to the final assembly line, we chatted with the company’s representatives.

Why do they do so? Other manufacturers usually source their components from other makers while producing the bigger parts such as the engine cases, frames, seats, bodywork. Producing parts and components in-house can be more expensive, surprisingly, instead of picking out those from suppliers then assembled Lego-style.

The answer is rooted in the Guangdong Tayo’s President’s philosophies:

We asked about the factory’s production capability. The answer was, “One complete bike every 3 minutes.”

What about the ZT310 series? “The model was introduced just last year. By now, we have exported more than 20,000 units worldwide. We sold close to 100,000 units in China alone.” Everyone who heard that gasped.

We stopped at the engine assembly area, where we had a good look at the external and internal parts of the ZT310 engine. We’re being honest here, because we know our credibility is on the line, too. The quality of the engine’s cylinder, cylinder head, valve cover, crankcase casting; bearings, conrod, crankshaft was as good as you could find in any bike from the major manufacturers.

Each worker assembles one engine to completion, rather than fit certain parts and moving it on down the line to another person. This way, the factory can track each worker’s performance for further training and development.

We were ushered down an isle past CNC (computer numerically controlled) machines. As the name suggests, a CNC machine receives instructions from a computer to mill parts. There are currently 50 of them, at an estimated USD 12 million each. “But these are not enough,” said the spokesperson. “There are still more machines on the way as we need to increase production to meet the orders!”

The bodyparts are mounted on “trees” and rotated into the spraying booth. Robots perform the painting.

“These robots are from Japan, South Korea and Germany. But we programmed them ourselves. That’s why the suppliers come down here and learn from us,” the spokesperson exclaimed proudly.

There were racks of the completed parts, in this case the mudguards. Each showed consistent painting quality and finishing. We compared two mudguards from two different bikes, too, yet the quality was exactly the same.

This was what I personally wanted to see. That’s because no matter what great suspension or components you slap on a bike, the frame and chassis connect them together into a good or crappy bike.

Steel frames are easier and cheaper to produce. The material is strong at the cost of weight, but it can be set back to shape much easier. Frames play another critical role in Zontes bikes because the engine oil circulated through it to perform as an oil cooler. This means the welds have to be perfect.

Pre-bent steel tubes were placed on a jig which moves in all axis horizontally and turns like a vinyl turntable. The robots place the exact amount of solder and their welds are consistent. Expert welders finish the job by welding where the robots couldn’t reach.

This was where metal sheets are turned into shapes. In this case, fuel tanks. Yes, Zontes motorcycles use aluminium fuel tanks.

Large sheets of aluminium were placed over a mold underneath. A large hydraulic press applied pressure from the top and voila, the top part of a fuel tank emerged.

Molten aluminium was piped to machines to cast them into the required parts. They are usually the aforementioned engine parts. The rough cast parts were then cut of excess by workers with hand tools.

Each piece was then checked with an x-ray machine to spot for abnormalities and defects. Parts with defects of more than 3 micron (the human hair averages at 50 micron) were rejected outright.

The supervisor at the section also showed us a complete swingarm for the new ZT310-V cruiser. It looked beefy but weighed only 4.7kg. The ZT310-series’ swingarms are cast in one piece rather than welded in sections to eliminate weak spots, besides allowing the engineers to tune its flex characteristics for handling.

The open lattice-work is reminiscent of KTM’s swingarms but doing do makes sense as the manufacturer saves some material and allows for the ease of spotting damages. Speaking of damages, the supervisor also showed us a bent swingarm. It was used to test for its strength. It required more than 2 tonnes of force to bend a truss, but it didn’t break. 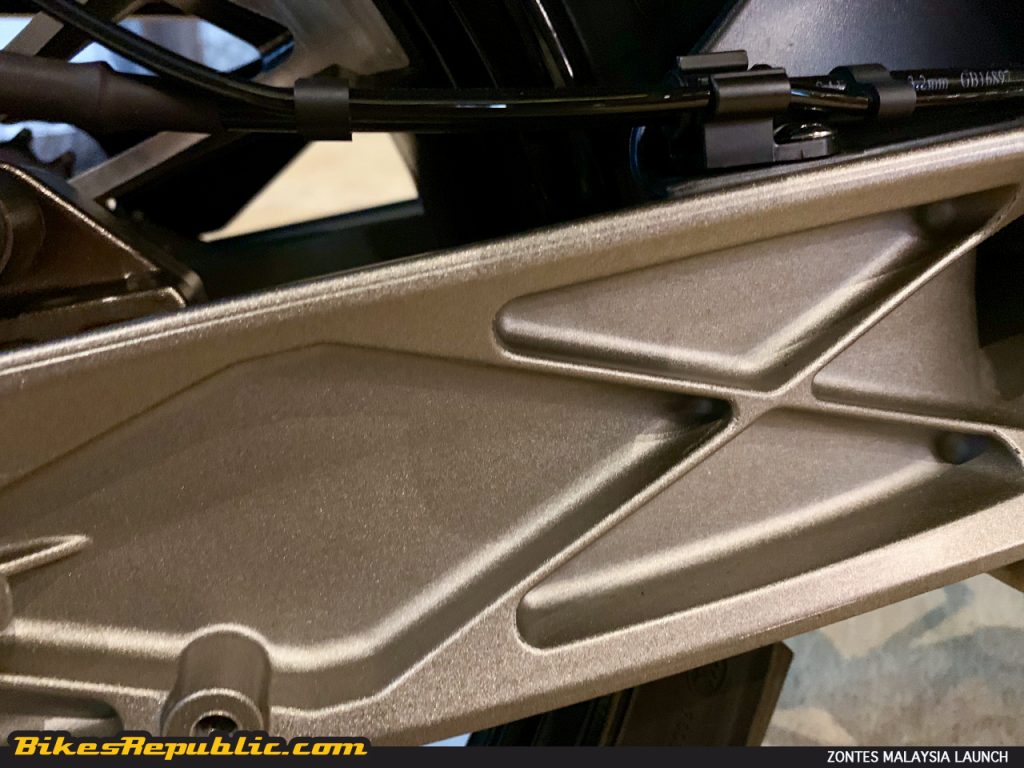 As for plastics, Guangdong Tayo uses a “special” type of thermoplastic resin which is shatter poof. A factory worker demonstrated that property by placing a side panel on the ground and bashed it with a sledgehammer. But the part didn’t break or crack and returned to its original shape.

The factory was immense! The company’s website said it covered around 400,000 sq. m. (40 hectres) but they are still expanding to cater for the extra orders. We had to ride on electric airport buggies to our next destination.

We stopped at a section where the top and bottom halves of the fuel tanks were welded together. The task was performed by robots. The fuel filler spout was also welded on in this section.

We walked past another row of CNC machines. These were used to mill the gears of the transmission and cam sprocket, in addition to camshafts and transmission shift drums.

The assembled motorcycles were filled with petrol and ridden around an indoor test track. Running the bikes outdoor would expose the new bikes to the weather. Each bike is tested.

We congregated in the conference room after lunch and was joined by Mr. Tao, the President of the company.

He outlined his principles for his organization, which centres around innovation and development of new ideas, or ideas that were proposed but never saw production.

It was amazing to hear how he pushes the envelope of technology. But he never forgot about infusing those technologies with quality and reliability. That’s exactly the reason why he chose to build entire bikes from scratch.

Mr. Tao put on a show for us before we headed back to Guangzhou. He got into his heavily modified Lexus and performed a drift show. 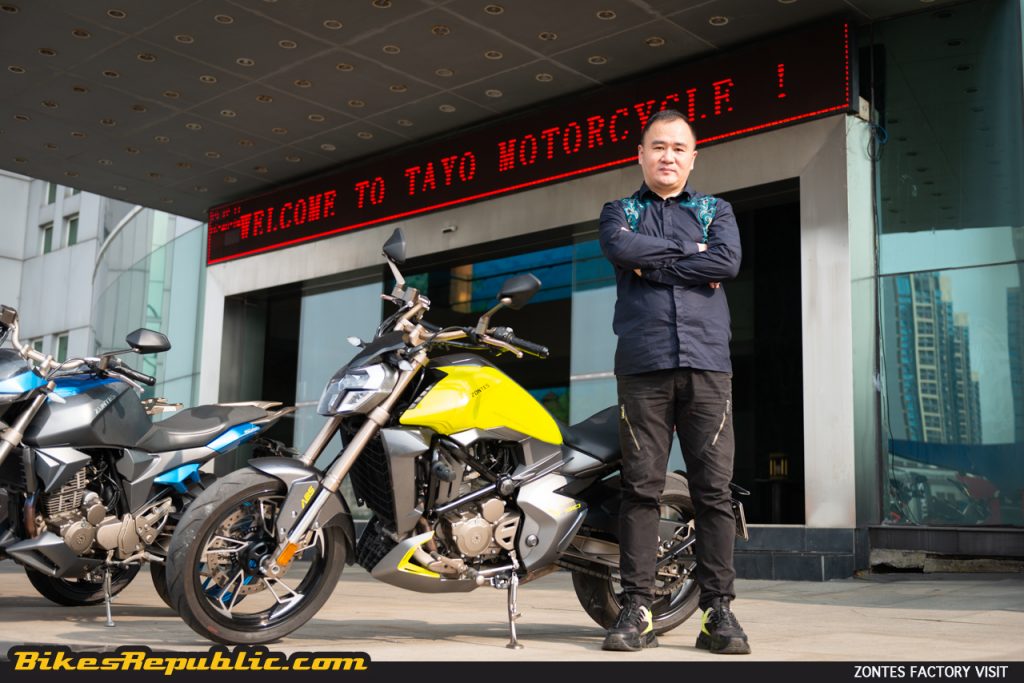 There were a number of sections where we weren’t shown, including the casting of the wheels and powder-coating. However, what we saw convinced us beyond doubt of the company’s commitment. 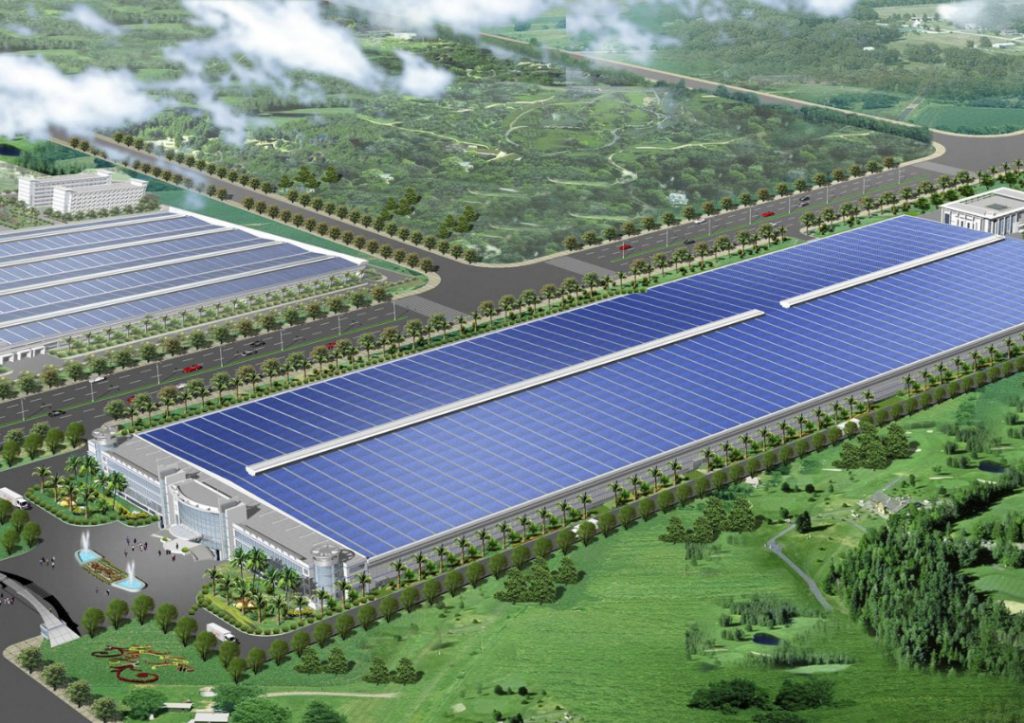 The Guangdong Tayo Motorcycle Technology Co., Ltd. isn’t some fly-by-night manufacturer who wants to churn out motorcycles by the thousands and sell them for high profits. Instead, what we witnessed was the obsession to produce the best motorcycles to compete with major manufacturers around the world.

Many used to laugh at Honda when they first started but look at them now. Will Zontes make it big? It’ll be foolish to bet against them.