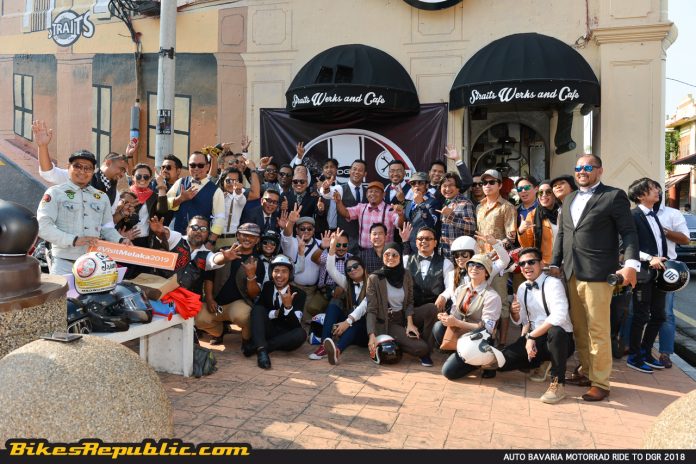 Auto Bavaria BMW Motorrad organized a ride to Melaka to participate in the Distinguished Gentleman’s Ride 2018 (DGR) over the weekend.

Most bikers ought to know what the annual Distinguished Gentleman’s Ride advocates by now. Motorcycle convoys are held on a single day all over the world to bring awareness and raise funds for research in men’s health issues. This is why participants consisting of men and women dress up in their best attires to ride their motorcycles. 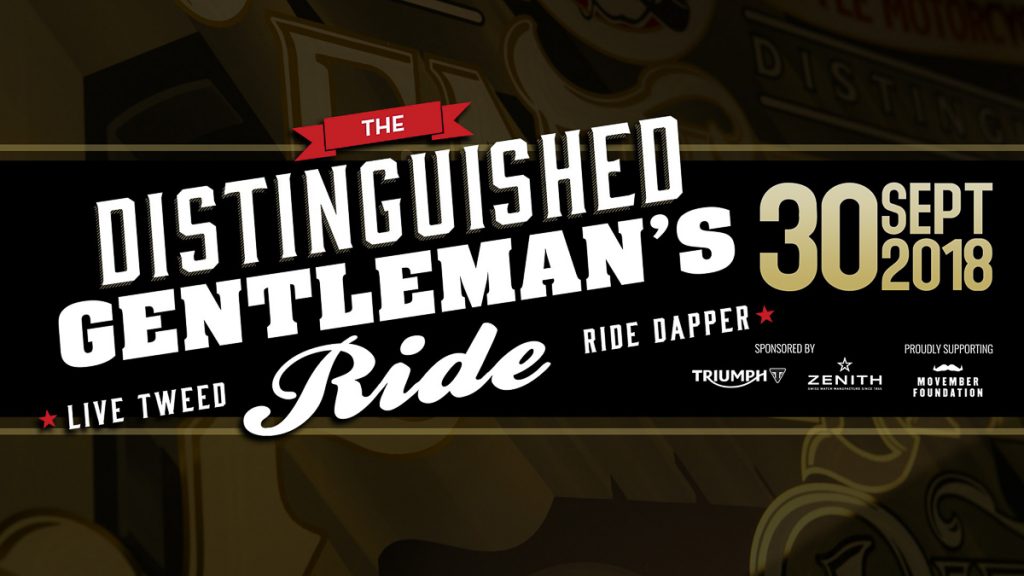 The event has grown to such gigantic proportion that it has become a permanent schedule in every biker’s calendar. In Malaysia, DGR 2018 was held in nine cities namely Kuala Lumpur, Penang, Melaka, Johor Bahru, Kota Kinabalu, Kuantan, Miri, and Sibu. 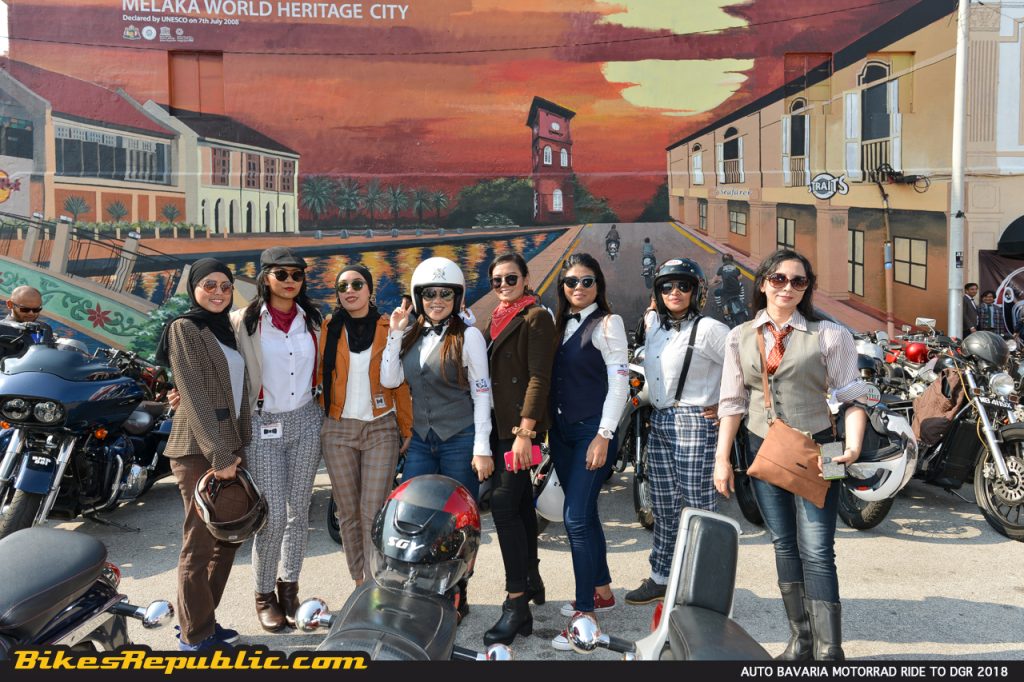 While DGR’s message is about serious health issues, that doesn’t make it less fun. In fact, Auto Bavaria BMW Motorrad has been taking part in the event for the second year running in Melaka. 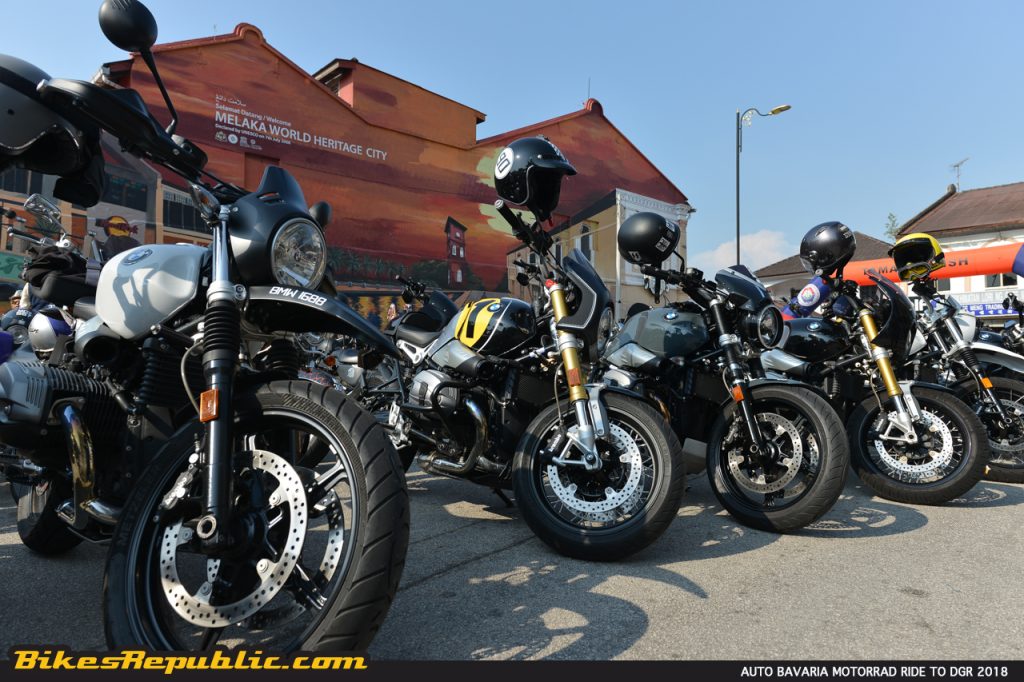 The ride was specially organized for BMW r nineT owners, since the r nineT range is BMW’s heritage line-up. “BMW r nine T owners, they very unique people so we want to create a memorable experience for them where they enjoy themselves and contribute to DGR,” explained Faisal Mustafa, Motorrad Manager at Auto Bavaria.

“The r nine T is about heritage, lifestyle and emotional motorcycling so DGR bodes well for the owners.”

A light breakfast was served. The AB crew loaded our luggage into the support van as the participants chatted with each other over “Nasi Lemak AB” which was apparently a hit among AB customers. 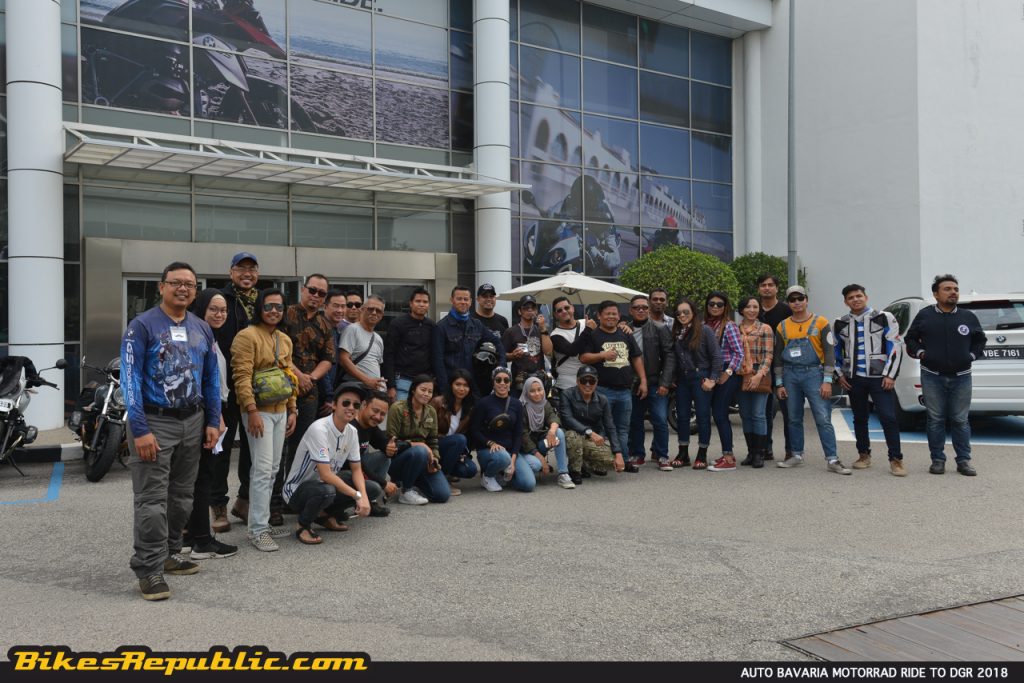 A ride briefing was held afterwards. The r nineT’s assembled consisted of every variant except for the Racer. The model was designed to be customized and not one was 100% identical as the other. (Including mine which was the r nineT Scrambler with a fuel tank covered by signatures.) 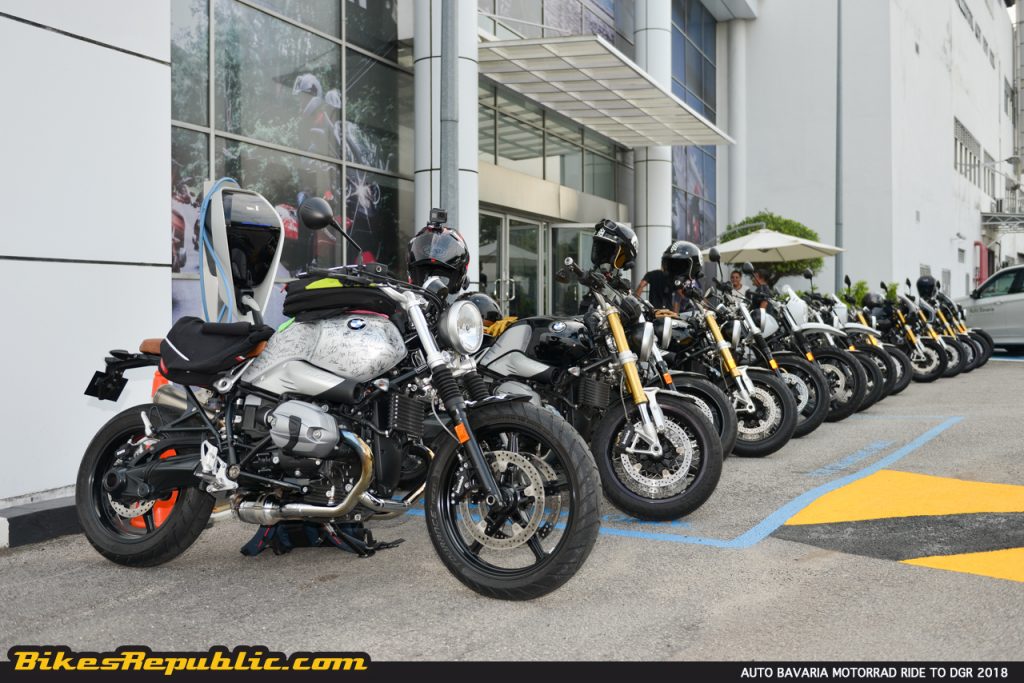 We rode out onto the highway and headed south. AB’s crew also rode along on their personal bikes in support of the convoy and DGR.

Soon, it became clear that the AB crew had worked hard to plan the ride as we proceeded onto the Seremban – Port Dickson highway. The route was clear today despite being a weekend. The convoy lead even signaled the participants to ride freely, if they so wished.

We turned west toward and Ayer Kuning and Linggi as we got near Port Dickson to ride along the coast. We stopped at an old two-storey shophouse with the classic Singer signboard for a few photos, before continuing passing famous places such as Masjid Tanah. 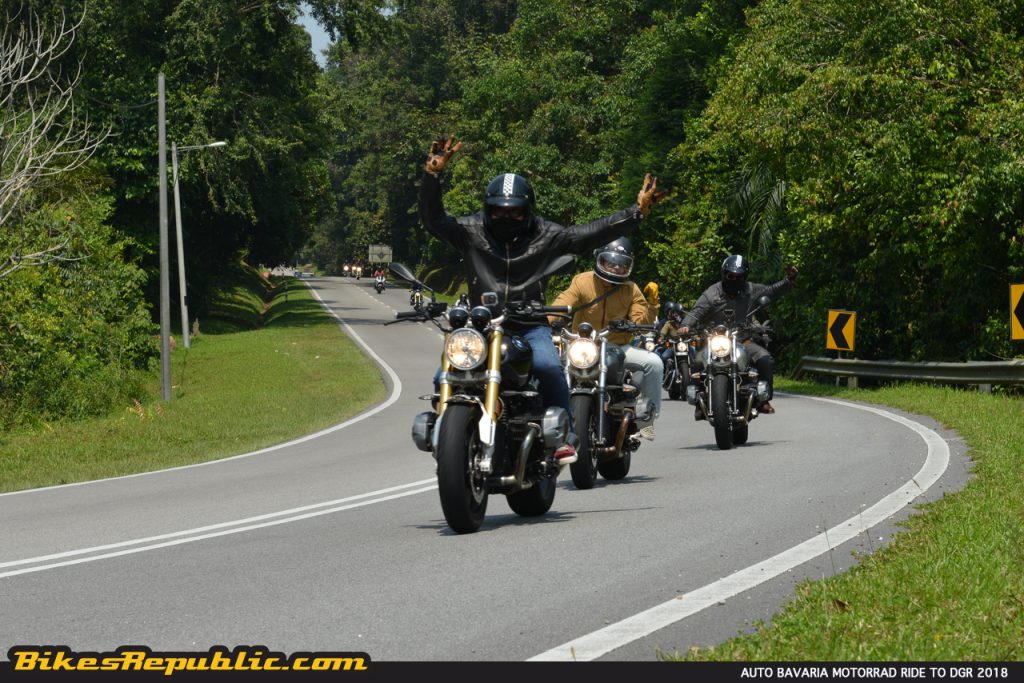 This route had a good mix of straights and corners, covered by smooth asphalt. The village view on both flanks of the road was interesting and cool air still hangs around the trees despite the sun beating down on us.

The participants showed plenty of restraint and discipline along the way. There was no show-boating, dangerous riding, holding up traffic, etc. 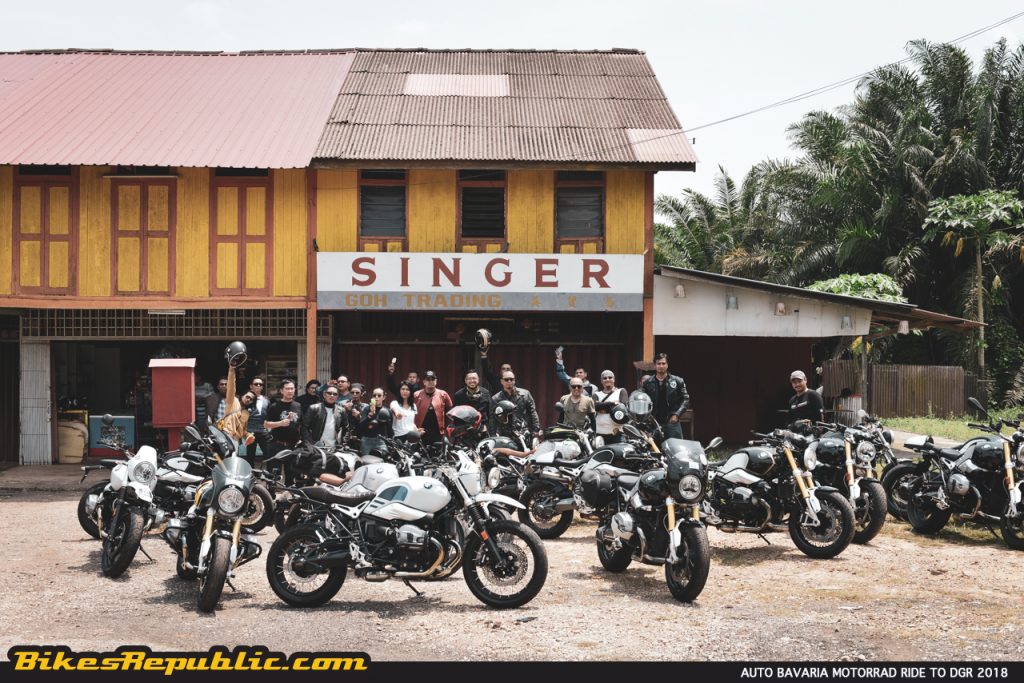 We soon reached a small “kedai makan” called Anjung Santai at Pantai Puteri where we stopped for lunch. As with traditional eateries in our country, it was built in the compound of a house and family operated. If you crave Melaka’s “asam pedas,” forget about those big and crowded restaurants in town because Anjung Santai’s beats them hands down. 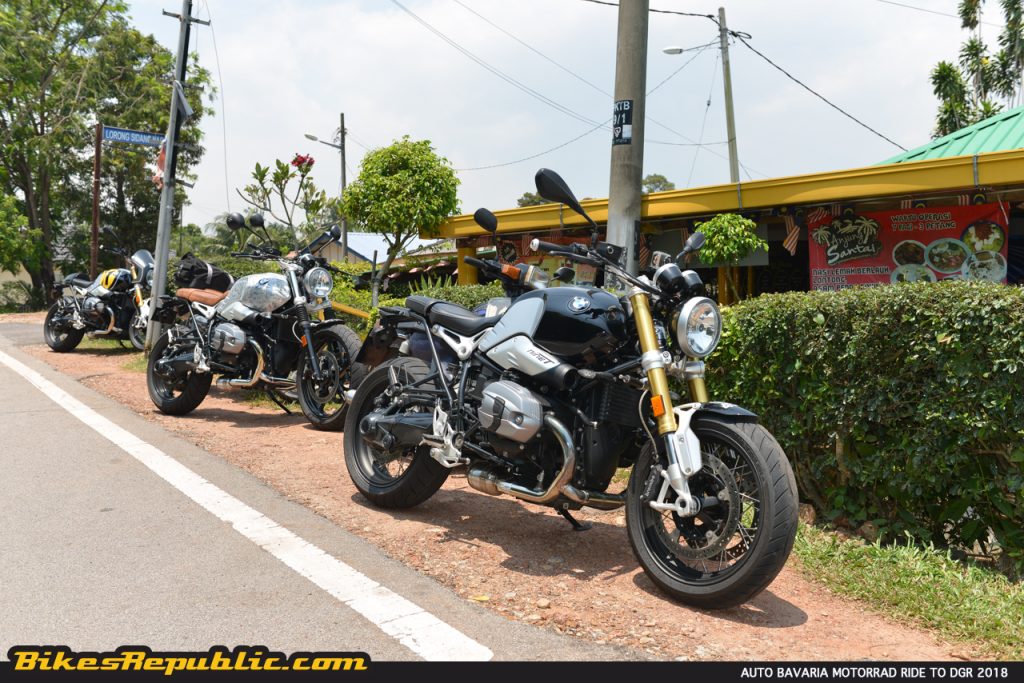 Anyway, we ended up eating a little too much and then worried about feeling sleepy for the rest of the way. We were pleased to learn that the eatery was just 1.8km away from Shah’s Beach Resort.

We checked in and were given plenty of free time to rest before reassembling for some fun and games. 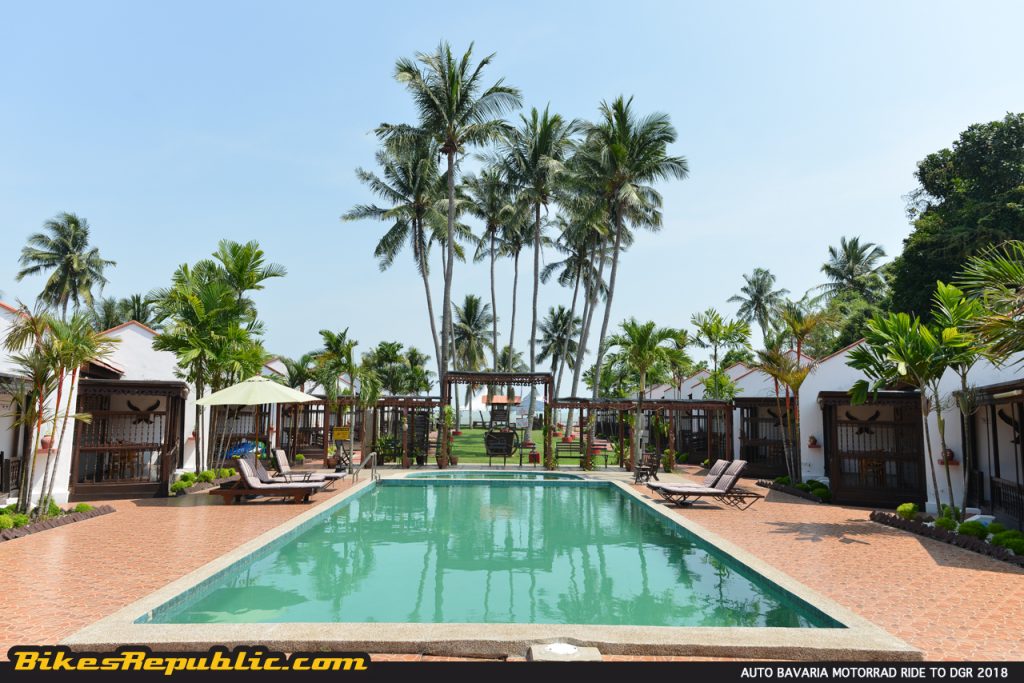 AB had organized a “slow ride contest” in which the slowest rider wins. A G 310 R was provided as the competition vehicle. The winner recorded 30 seconds to cover the 50m path. The fun part was listening to the guys teasing their buddies who were riding. 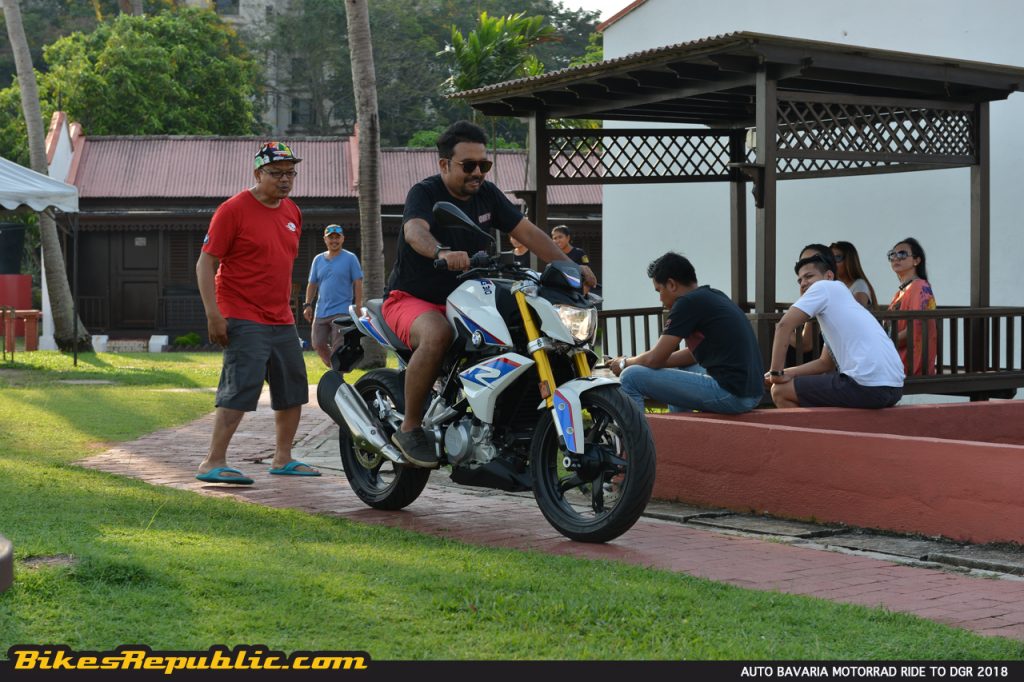 “We wanted the riders to have fun together,” says Hasrul of AB. “The best way is to organize some fun and games. A ride is boring if we just get to a place and give everyone free and easy time. There’s camaraderie that way.” 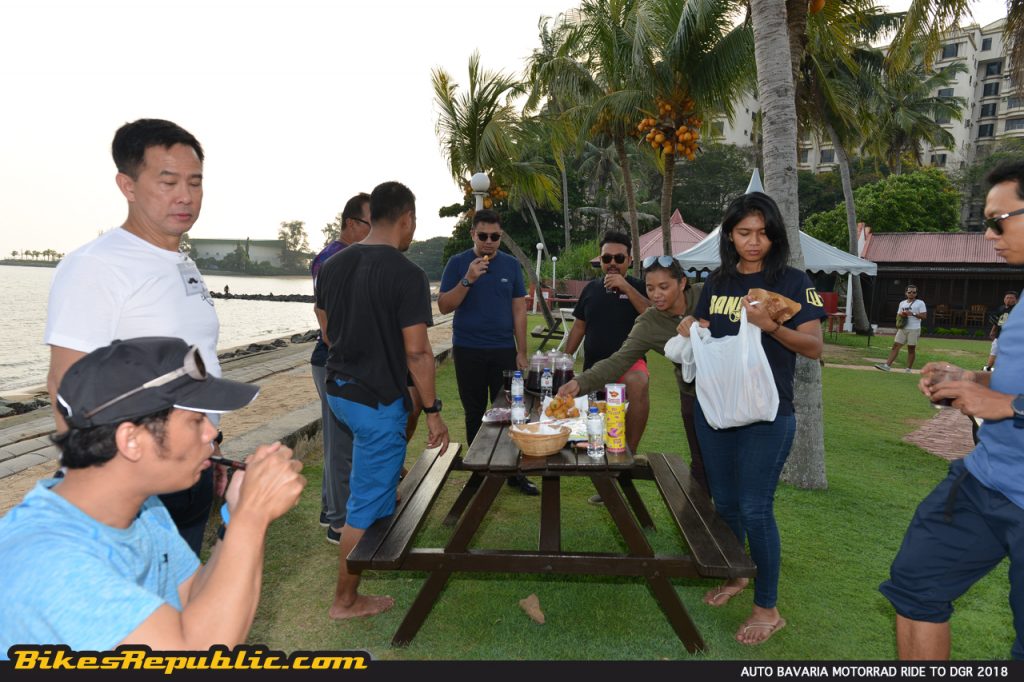 Dinner followed soon after. AB had chosen the resort as it was some ways out of Melaka’s city centre for the sake of some peace and quiet, which was a great choice. But riding into town on Saturday night was going to be a challenge. But have no fear because AB had enlisted the assistance of the traffic police and marshals to escort us all the way to the Nonya Kitchen restaurant at Jonker Walk. 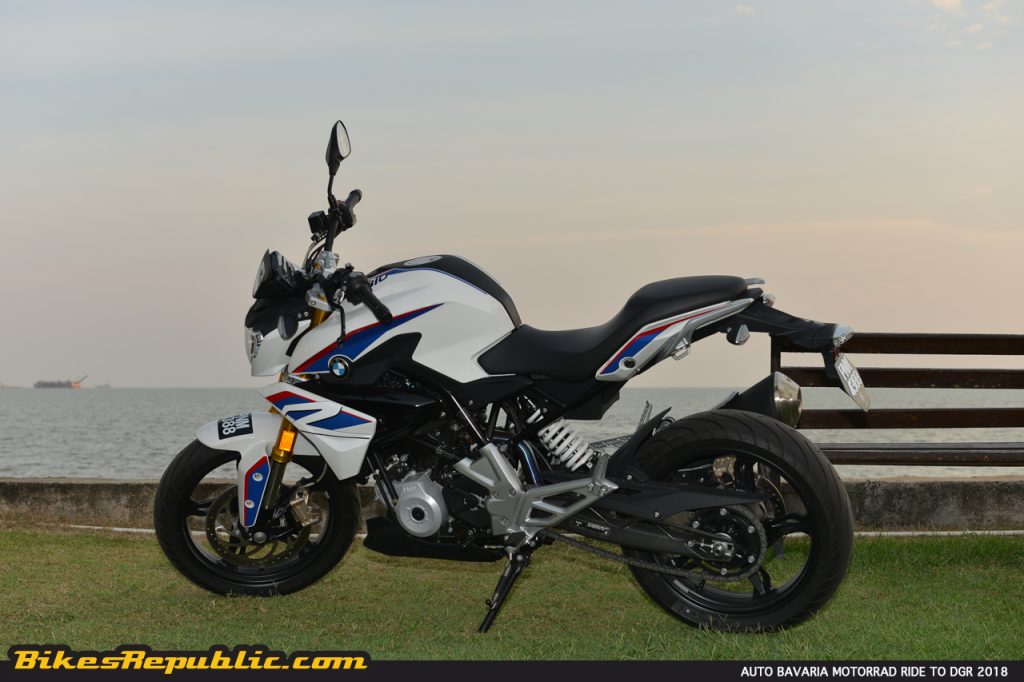 Dinner consisted of traditional Baba and Nonya cuisine. Prizes were handed over to the contest winners after dinner. We were then given free time to roam Jonker Walk or whatever activity we chose.

Some took to riding around the city for photos, some went shopping, others went to Hard Rock Melaka, while some rode back to the hotel for some well-earned rest.

We reassembled early the next day (Sunday, 30th September) for the DGR ride. The riders both men and women must’ve been truly excited about DGR as they were already dressed by 8am! 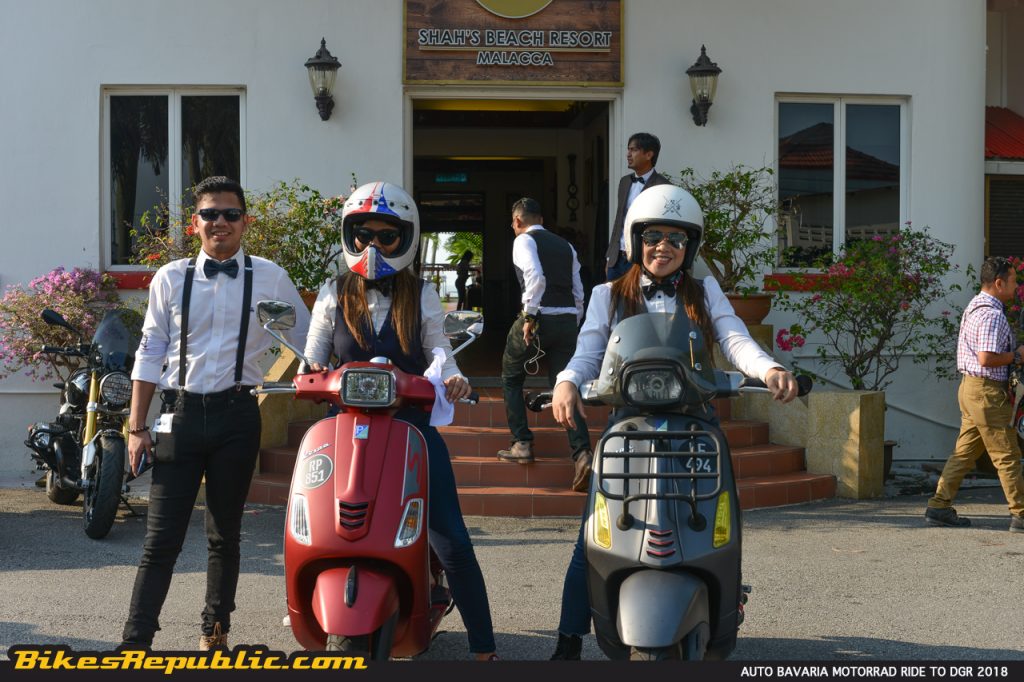 We rode to the Straits Werks Café in downtown Melaka, opposite Masjid Kampung Hulu which is one of the oldest mosques in Malaysia, for the start of DGR Melaka 2018. 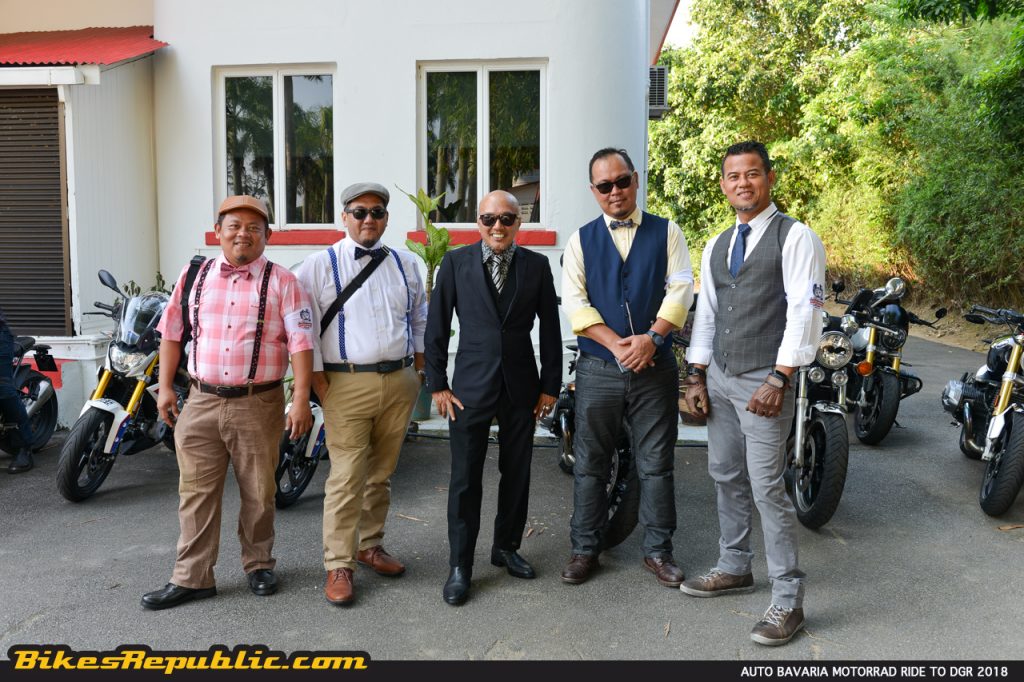 As with every DGR, it appeals to all sorts of bikes and we witnessed classics, customs, sportbikes, nakeds, retros, etc. all in one place. The ride was flagged off by the Governor of Melaka. 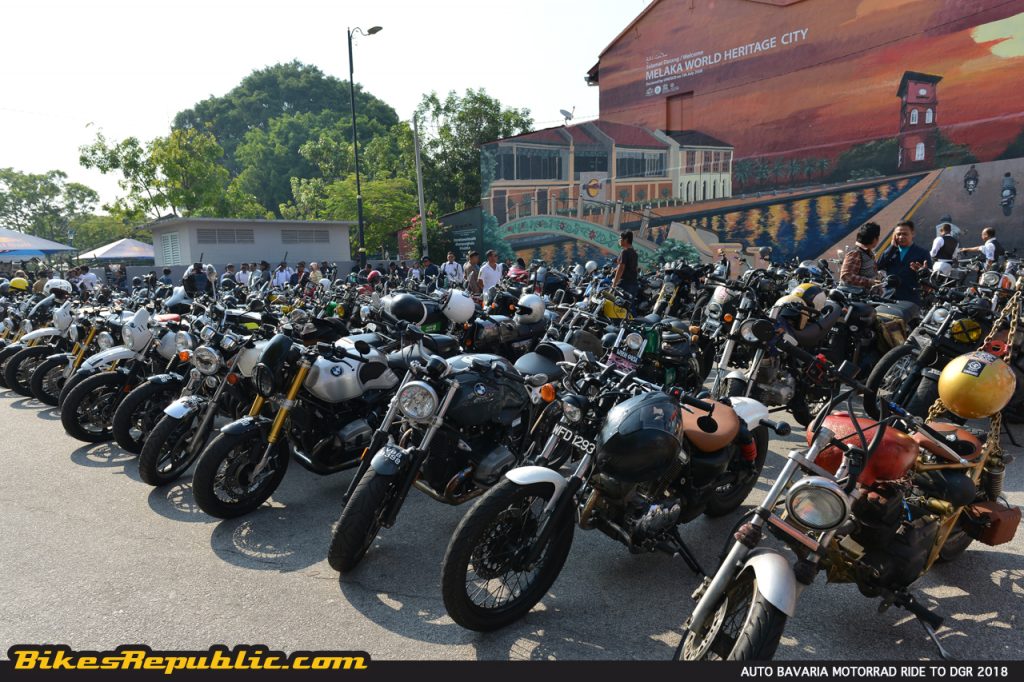 BMW r nine T owners, regardless if they rode up with AB or otherwise, looked out for each other and started to ride in one large group of oil-head German Boxers. The collective sound of 30 air-/oil-cooled Boxers resembled that of squadrons of piston-engine fighter aircraft.

Holding DGR in Melaka presents its own unique set of challenges, the main one being the weekend traffic as out-of-towners (such as us) flood into the historic city. The roads around the historic sites will surely be packed as will the roads leading in to the city.

Therefore, DGR 2018 in Melaka was different as we ran the loop without stopping unlike the previous year and this year in other cities.

We rode from Straits Werks Café, past Stadthuys, Hard Rock Café and the entrance to Jonker Walk, down to Klebang and turned back. Done within an hour. And yet there were drivers who shoved their cars into the middle of the convoy when the police escorts weren’t in sight.

The weather was way too hot by the time we got back and the participants were definitely feeling the effect underneath their suits and vests. We adjourned quickly back to the hotel to freshen up before checking out from the resort. 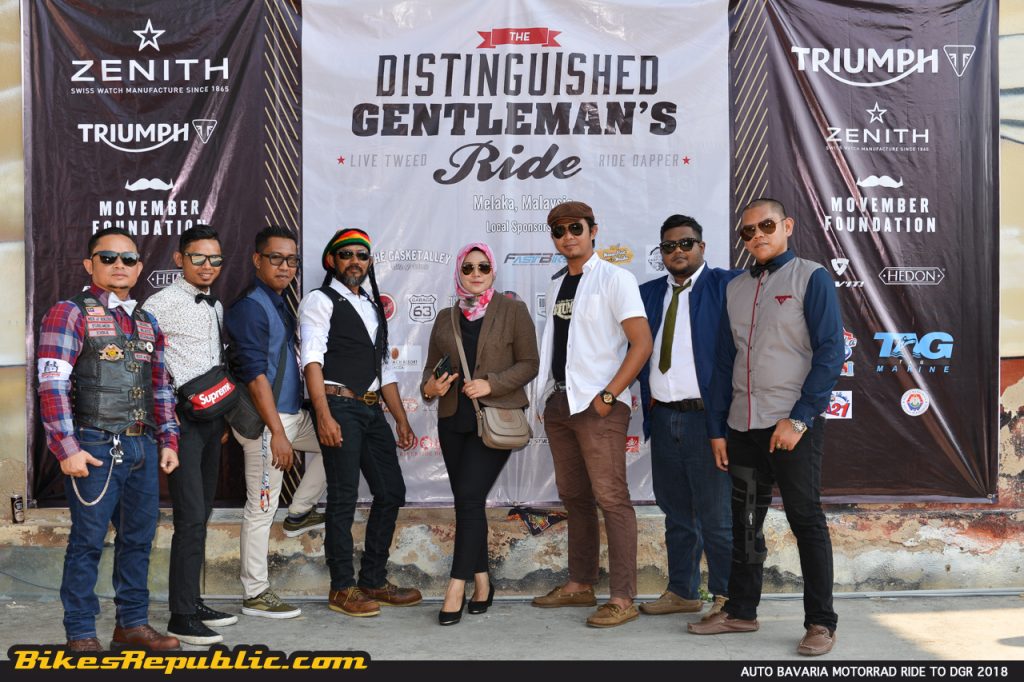 AB presented another round of prizes to the owners of the best-looking r nine T and best dressed male and female DGR participants. 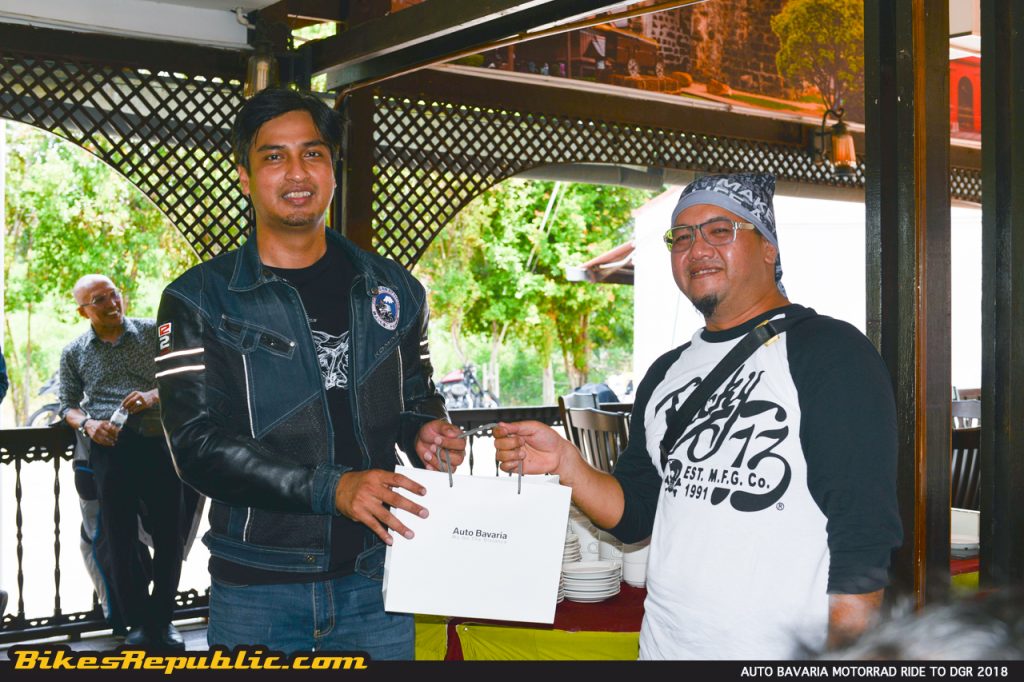 We rode back the way we came and stopped at Alor Gajah for lunch for the famous cucur udang near the town’s main roundabout. It was good!

The convoy participants separated from that point as a few were headed to different places, including to the DGR in Kuala Lumpur.

In conclusion, it was one the best rides I’ve ever had the pleasure of joining. Credit has to go to the hardworking (read: overworked) Auto Bavaria Motorrad crew who organized the ride. It has to be said that a successful ride represents only 10% while the other 90% was the work that went into organizing it.

“Organizing rides in Melaka is always difficult. The (traffic) jam, finding parking spots, trying to keep the convoy together, but I feel satisfied with the ride because they riders had enjoyed themselves; that’s our main objective. This ride was planned two months ahead, especially on choosing the route, marshaling and safety. I am also thankful to have a great and supportive team,” said Faisal in closing.

The ride was also made enjoyable by the r nine T owners themselves as they were a happy and fun-loving bunch. They rode and enjoyed it together as a unit. Their personalities are reflected in their choice of bike.