It was a rookie who stole the limelight in Race 2 of the Asia Road Racing Championship (ARRC) 2017. After finishing on podium in Race 1, Taiga Hada from the RAMA Honda by NTS T.Pro Ten 10 squad rode brilliantly to the finish line in the 16-lap race. Check out the race highlights below.

The 18 year old and his Honda CBR600RR crossed the finish line with a 5.089 seconds’ gap in front of runner-up, Azlan Shah from the Manual Tech Kawasaki Racing team. He kept his cool and his lead to clinch the first 600cc win of his career with a time of 24’51.787s. “My rear tyre was a bit slippy throughout the race, but apart from that, I have no other complaints. It was a thoroughly enjoyable race,” said Hada.

After a wrong tire choice yesterday made by Azlan Shah, the 33 year old rider from Selangor managed to recover brilliantly in Race 2 with a race finish in second place. After having fought brilliantly with the other riders on board his Kawasaki ZX-6R, Azlan Shah ended the battle in front of another 18 year old rider hailing from Indonesia, Irfan Ardianshah.

The Supersports 600cc category witnessed another rookie on podium thanks to Irfan Ardianshah from the Astra Honda Racing Team. What seemed impossible for the young rider starting in P12, the Indonesian rider quickly recovered precious positions throughout the 16 laps around the Johor Circuit. Irfan finished the second race on podium but due to the many battles with other riders, he crossed the finish line 13.141 seconds behind the race winner. 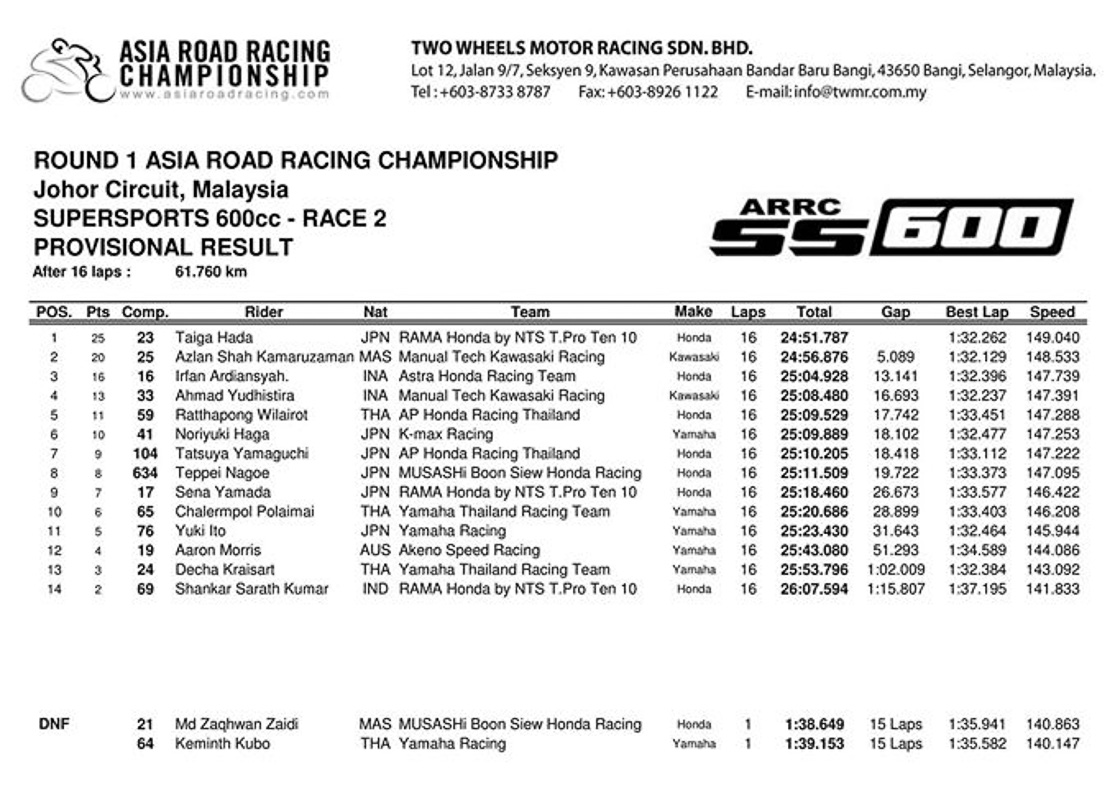 Round 2 of the 2017 FIM Asia Road Racing Championship will take place at the Chang International Circuit on April 14 and 5, 2017. Stay tuned to Bikes Republic for more ARRC updates.