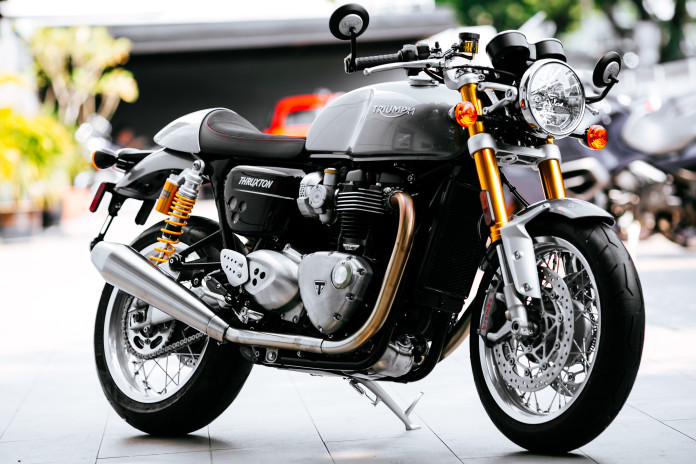 Hailed as the coolest motorcycle in the world, the Triumph Bonneville range in Malaysia has been refreshed to include the cool as ice, tough as nails, makes you want to ride hard and beat someone up, the top of the range Thruxton R.

Also introduced with the R are the Bonneville T120 and T120 Black, but just in case you were wondering which one we approve of, now you know.

We first got acquainted with the Thruxton R at the EICMA Motorcycle show in Milan, Italy last year, you can read the story here. The bike is a success at first sight, there is something weirdly appealing about a bike with a minimalistic design, huge power and lots of exposed steel.

The Thruxton R has been well received globally with positive reviews from the world’s motorcycling media. We will leave our opinion till we ride it locally, so the facts first.

An extension of the Triumph Bonneville range, the Thruxton R is a true to form cafe racer, a reincarnation of sorts of a successful motorcycle from the 50s and 60s that won a lot of local races in the UK. Though the new Thruxton R lacks that racing pedigree of its four fathers, it has the looks, and the power to match.

Being a modern Triumph, it naturally comes with impressive levels of craftsmanship, with just the right amount of modern technology delivered in true-to-form simplicity.

On the safety front, it comes with an ABS braking system, a ride-by-wire throttle system that also gives you three selectable riding modes – road, rain and sport. It also has traction control and a torque assist clutch, as well as a LED rear light, Daytime Running Lights (DRL) up front, an engine immobiliser and for the sake of convenience, a USB charging socket.

The Thruxton R is offered here at RM91,900 without insurance and on-the-road costs.

And for those of us who prefer a bit more subtleness in the performance area but don’t want to miss out on the cool package – the Bonneville T120 and T120 Black are just the answer.

The T120 and the Black edition are a true throw back to the original Bonni from 1959.

As with the Thruxton R, both offer the highest quality materials and finishing, gorgeous design lines and a big engine that does not pale too much in comparison with the top of the line Thruxton R.

The T120 and the Black edition make an equal 80hp at 6,550rpm – up 18% from the previous model, and 105Nm of torque – an amazing 54% increase in power. Power delivery is said to be linear with a six-speed gearbox providing crisp gear shifts.

With its timeless design the only thing connecting both Bonni’s to the past, the T120 and the Black edition offer such pleasantries as ABS braking, ride-by-wire with 2 riding modes, torque-assist clutch, LED DRL headlights, LED rear light, a USB charging socket, among others.

The Black edition offers that and a dark brown seat, all-black detailing with black rims, basically black everything.

All three Triumph’s are available for viewing and booking at the flagship Triumph store in Petaling Jaya or you can visit the official Triumph Malaysia website by clicking here.