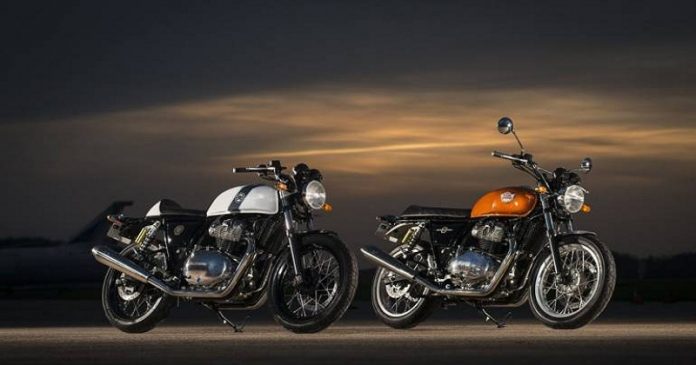 Royal Enfield has always been known as the manufacturer who produces single-cylinder thumpers. However, the launch of the Royal Enfield Interceptor 650 and Royal Enfield Continental GT 650 last night takes them up the capacity game.

Both models are powered by the same 648cc, air- and oil-cooled, DOHC, fuel-injected, parallel-Twin engine. It produces 47 hp at 7,250 RPM and a respectable 52 Nm of torque at 5,250 RPM. Producing maximum at lower RPMs means the engine requires the rider to ride at ease and ride the torque wave, rather than having to rev the lungs out of it. Apart from that, the 2,000 RPM separation between maximum horsepower and torque provides a “flexible” engine thereby giving the rider and impression of having power anywhere in the rev range.

The two models are differentiated by their respective styling. The Interceptor 650 is positioned as “standard” motorcycle. Consequently, it features a higher handlebar and flat seat for a more relaxed riding ergonomics. It also has a bigger fuel tank at 13.7 litres.

The Continental GT 650 takes on the café racer role, on the other hand. Hence, it features clip-on handlebars mounted beneath the top triple clamp, besides a subtly stepped seat. The combination provides a sportier riding position. The fuel tank is smaller at 12.5 litres.

Both models also share the same chassis and rolling stock. The forks are 41 mm conventional telescopic units, while the twin rear shocks have remote reservoirs. Both front and rear wheels are spoked 18-inchers. Braking duty is handled by ByBre calipers.