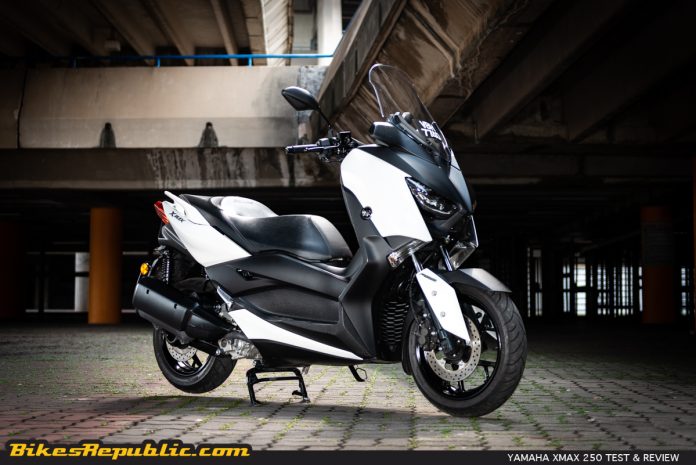 Sure, scooters are the embodiment of convenient motorcycling, to the stage of being lazy – nothing else you need to do but to fill up, twist and go. Besides that, I don’t need to worry about slinging a backpack hence neckaches and backaches, since I could throw everything into the storage space under the seat. 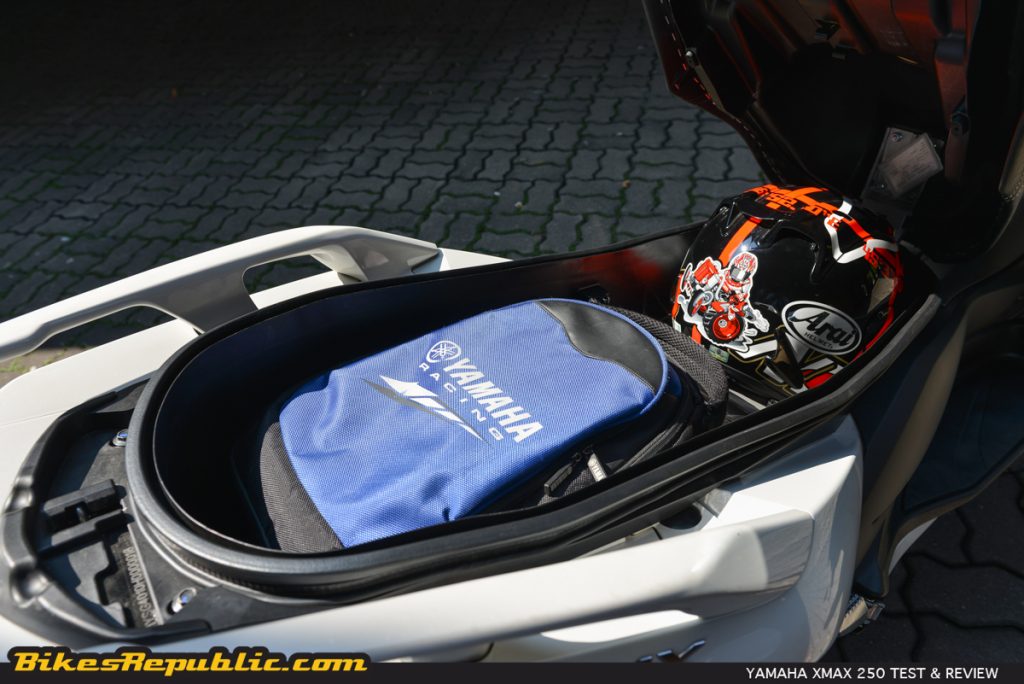 But, I’ve never actually considered owning a scooter prior to this; due to the fact that their suspension gets hammered followed by my spleen over sharp bumps or potholes. If that’s not bad enough, their front tyres weave about when cornering. Those two factors alone had always put a damper on my enthusiasm. 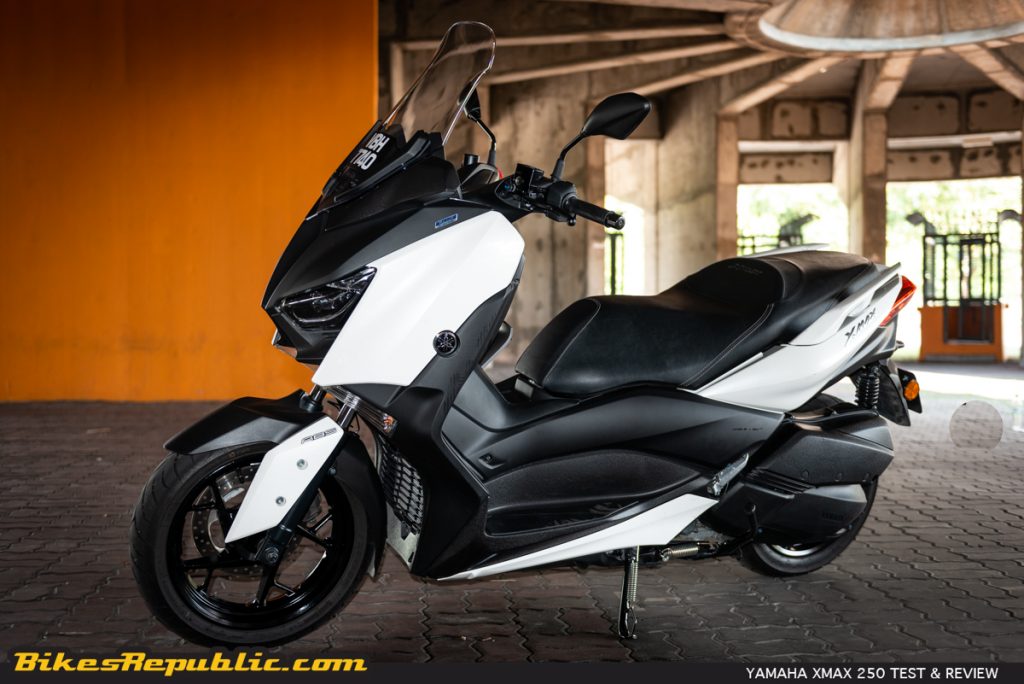 But what about this new Yamaha XMAX 250? I was looking forward to testing the new MT-09 and was a little smitten when Hong Leong Yamaha Motor only had this XMAX available during the time. Well okay, for the benefit of our readers who do like scooters, I acquiesced to the offer.

Hong Leong Yamaha Motor is the one manufacturer who offers a wide selection of scooters in the Malaysian motorcycle market.

The XMAX 250 on the other hand, is powered by a 250cc, single-cylinder engine, making it the biggest scooter officially offered by HLYM. While the rest could be considered “city” scooters, the XMAX is of the maxi/GT type. As such, the XMAX is much larger in size, complete with a large windscreen and bigger fuel tank. The underseat trunk is also much bigger and you could fit a couple of helmets, or a helmet and a backpack filled with a 15” laptop. 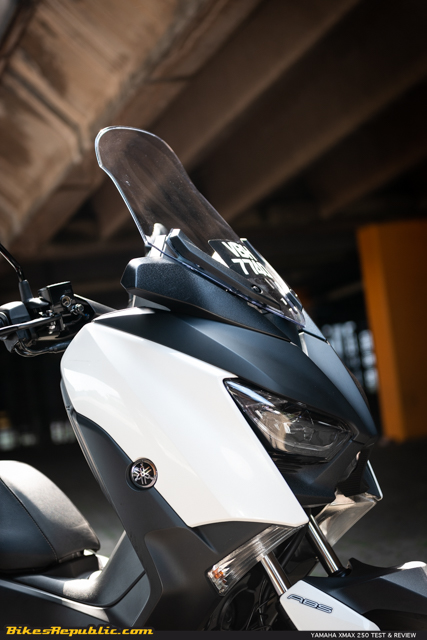 WHAT FEATURES DOES IT HAVE?

There instrument panel is also large in size, dominated by a large speedometer and tachometer, flanking an LCD multi-display in between. 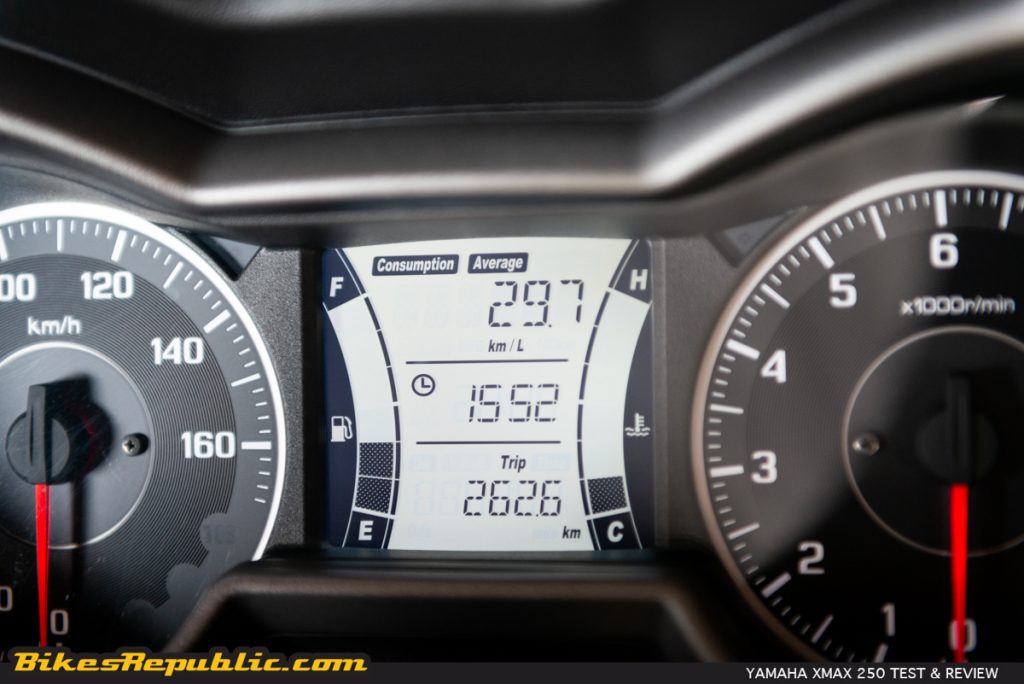 There are storage compartments on each side of the front panel – the left is locked with the ignition while the one on the right is unlockable. A 12V cigarette lighter type outlet is on the left, enabling you to charge your phone on the go. 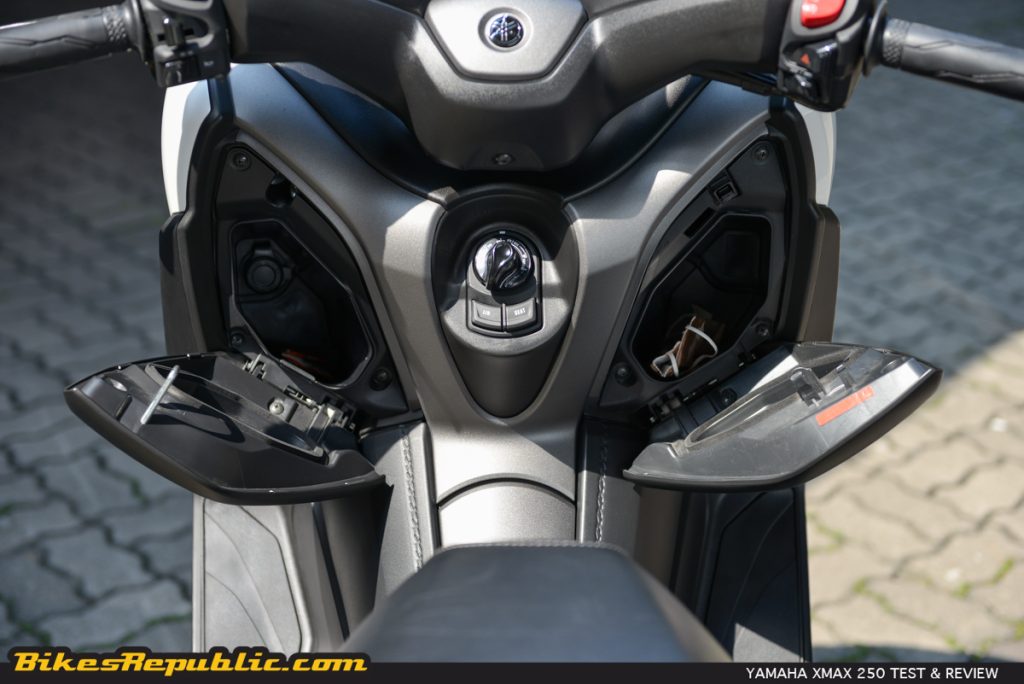 The XMAX also features the SMART Key system first seen on the NVX. It needed a little figuring out at first, but it becomes second nature soon enough. Once you’re used to it, you’d swear that it’s the best motorcycle locking system. For example, it’ll warn you if you’ve forgotten to arm it. 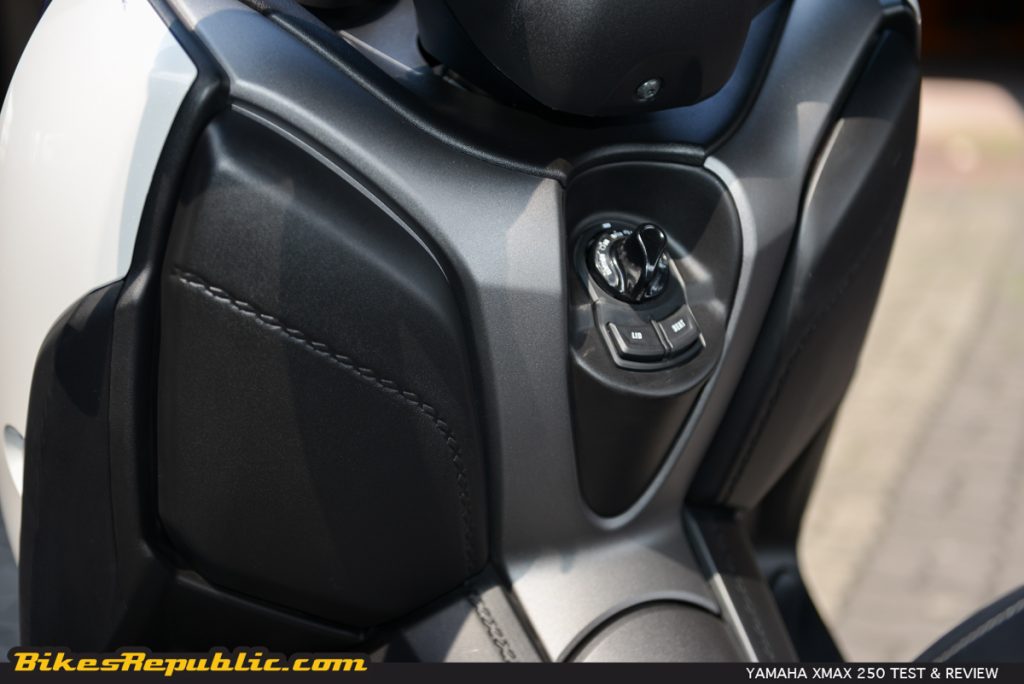 The XMAX is one of the best-selling scooters in Europe, therefore it’s equipped with ABS and TCS (traction control) as standard equipment. 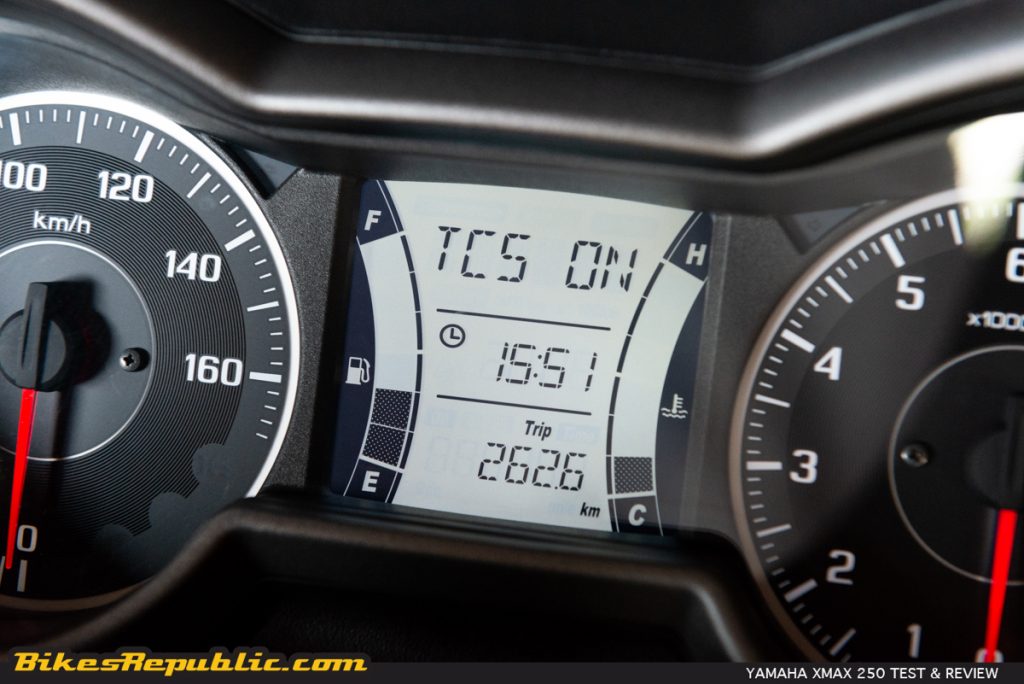 Those beautifully designed headlamps are fully LED with LED “positioning lights” (other manufactures call them daylight running lights). The taillights were equally good-looking and they were LED too. The turn signals remain as normal bulbs, though. 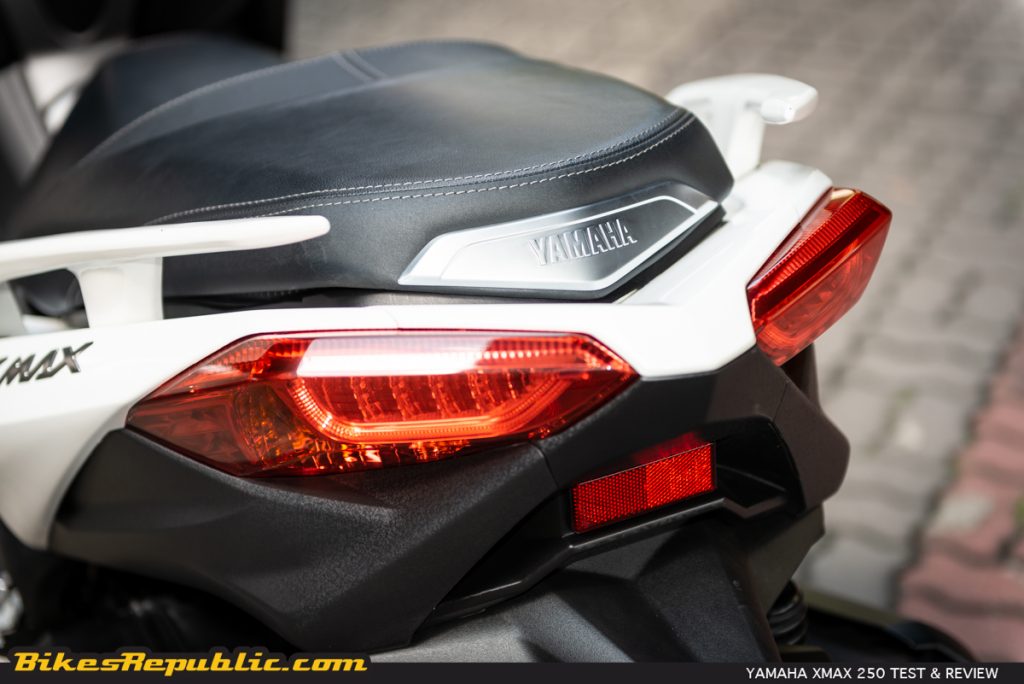 WHAT WAS THE FIRST IMPRESSION?

The seat was taller than it looked. Although the spec sheet described the seat height at a low 795mm, I had to move one cheek off the seat just to tip toe on one foot like I was on an adventure bike. The wide portion under the seat was the cause. And surely enough, the test bike had been dropped on one side. 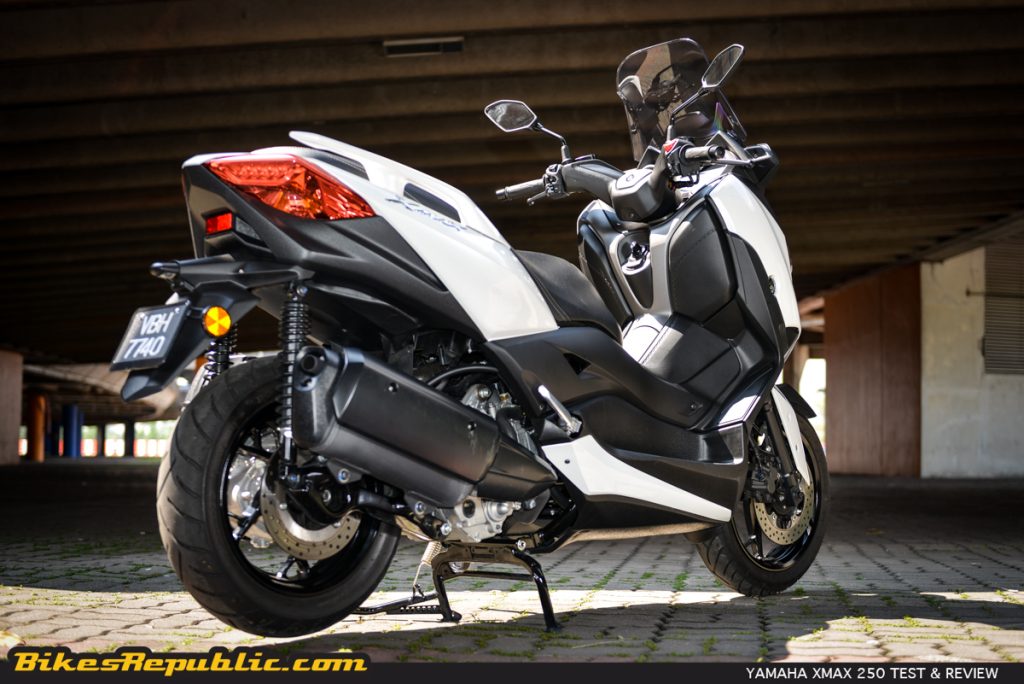 The handlebar is placed lower than on most scooters and it felt sporty. That placement also meant that my view of the instrument panel wasn’t blocked at all.

The seats were definitely comfortable and supportive.

HOW DID IT PERFORM?

The 250cc, fuel-injected, single-cylinder engine features Blue Core enhancements, including variable valve timing (VVT). It started up quickly every time and there was very little vibration for a scooter. 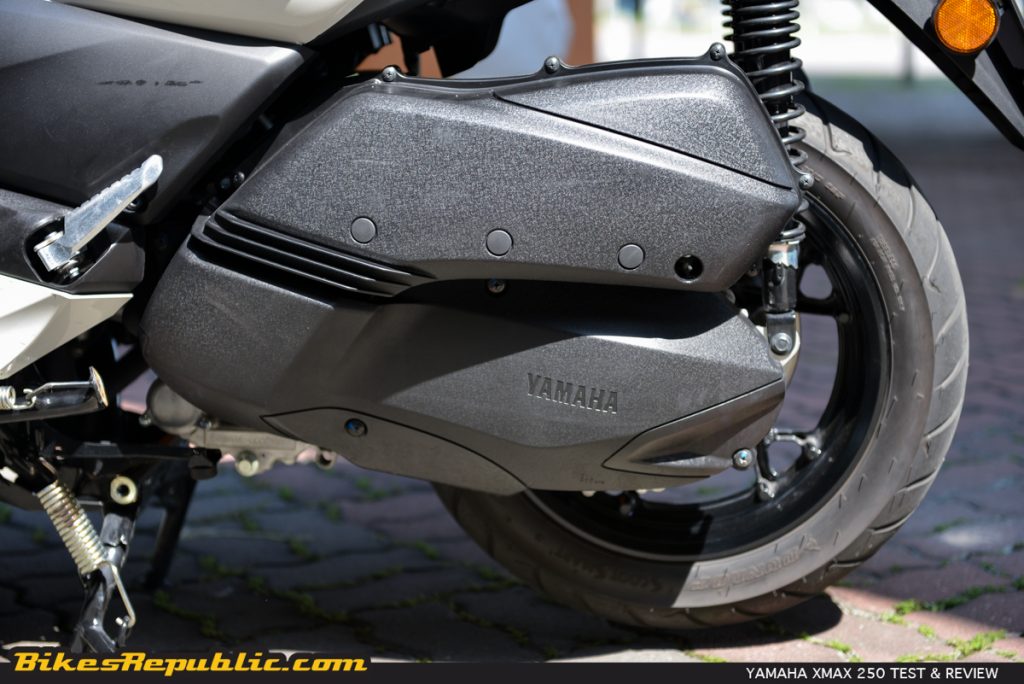 The fun of a twist ‘n’ go is of course the acceleration and the XMAX accelerated very quickly all the way to its redline. Hold on to it and you’ll hit a little more than 140 km/h. However, the bike was very economical. We managed to obtain 324 km from 11 litres of fuel despite our heavy-handed testing and we had to fill it up only once in the nine days that we had the bike. 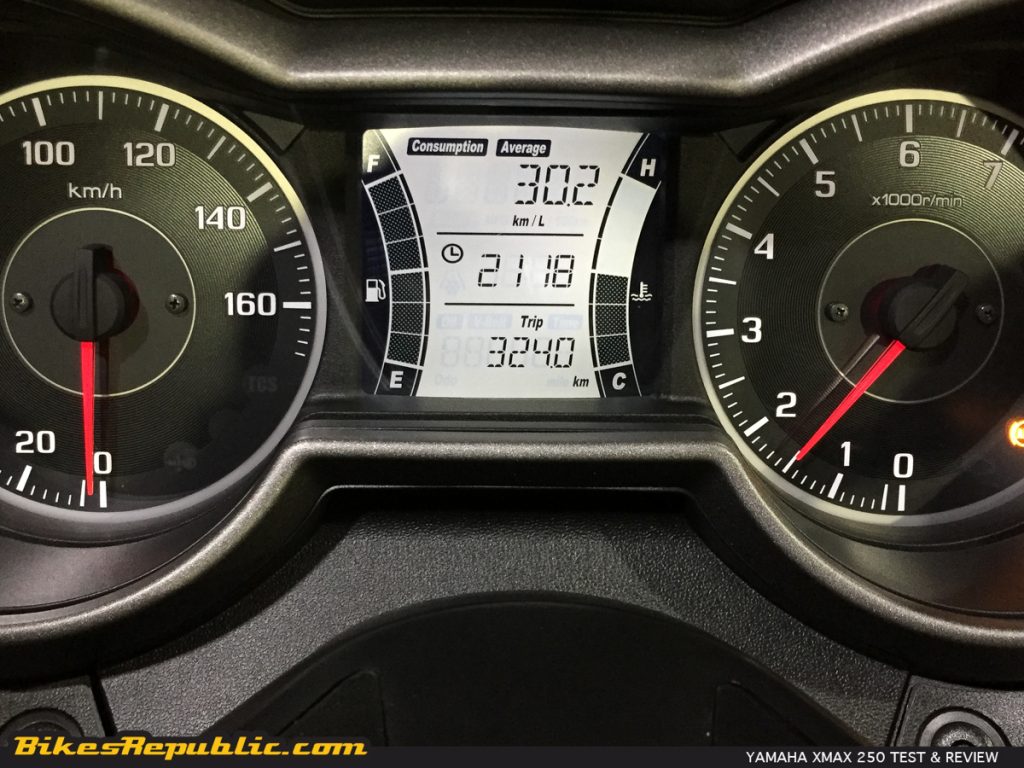 But best of all, the XMAX 250 never once shook its handlebar when we blasted it through fast, sweeping corners unlike other scooters. 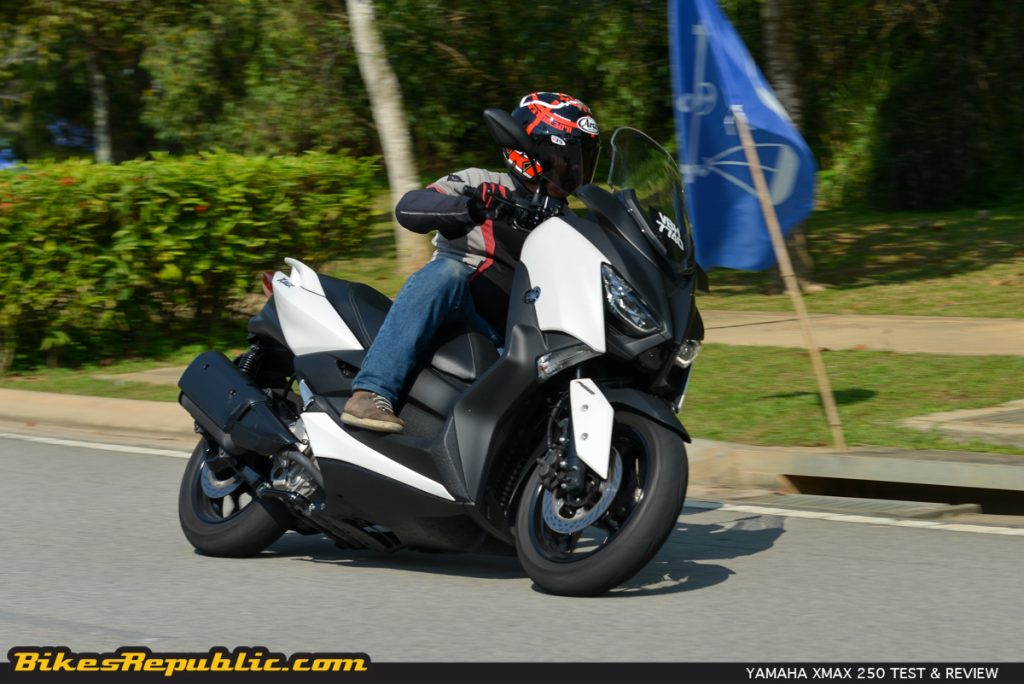 The handling was confidence-inspiring, and I didn’t hesitate in taking up to Genting Highlands. At night. On these roads, it was a joy to ride the XMAX as I could just swing it into the corners. It had plenty of cornering clearance and took lots of lean angle to scrape the centrestand. Even then, it never once threatened to chuck itself down the road (or off the mountainside) at full lean. 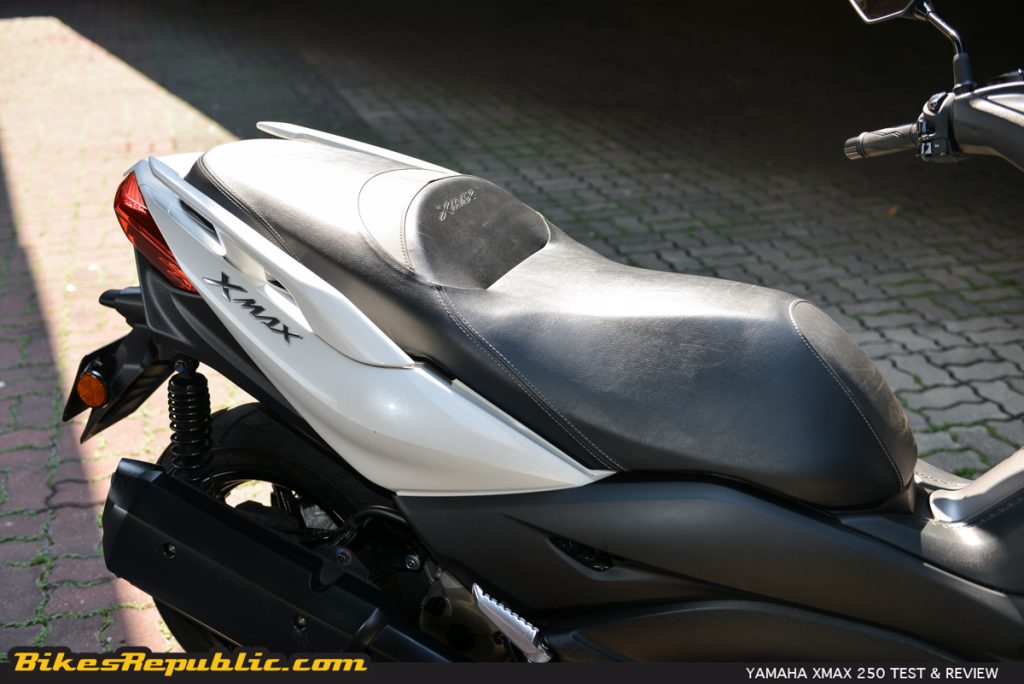 The brakes were superbly strong although they felt a little vague at full pressure, possibly due to the rubber hoses. However, that’s just a personal preference as I’m sure owners will find them pretty strong in standard trim. Another thing I noticed was the brake levers didn’t pulsate when ABS was triggered. Instead, the levers actually extended slightly to the front when that happened, allowing me to maintain maximum brake pressure. 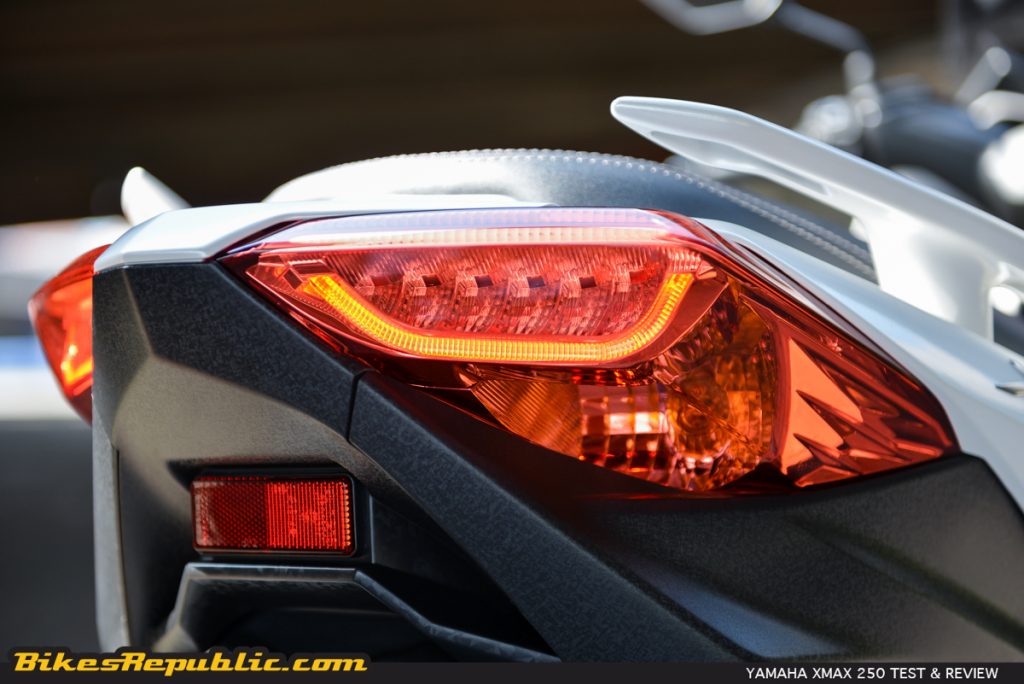 The headlights were bright as a much-welcomed feature in the fog.

Down Karak Highway, I could ride the XMAX almost as if it was a normal bike, surprising a few car drivers along the way. 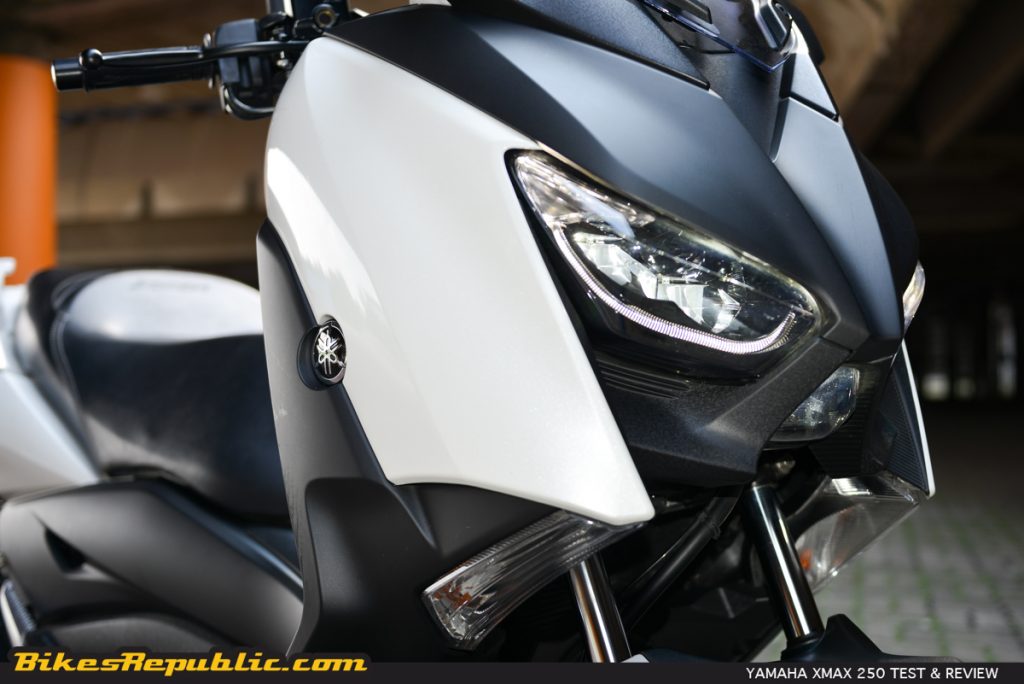 As for the suspension, it was a good balance between comfort and performance. Big potholes still translated to big hits but they were a lot more damped out than other scooters and mopeds.

The Yamaha XMAX 250 is a great scooter for the daily commute and also some touring. Its great looks is matched by its great performance, especially because it doesn’t wobble in corners, but also due to its practicality and economy.

So I guess I’ve found the scooter that I’ve been looking for. 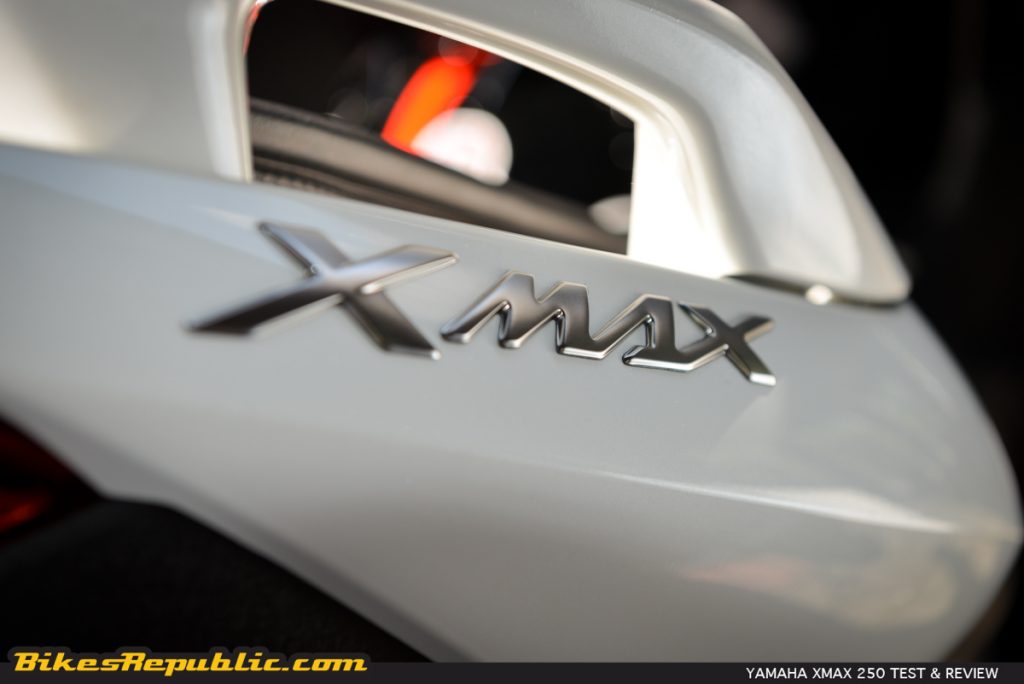