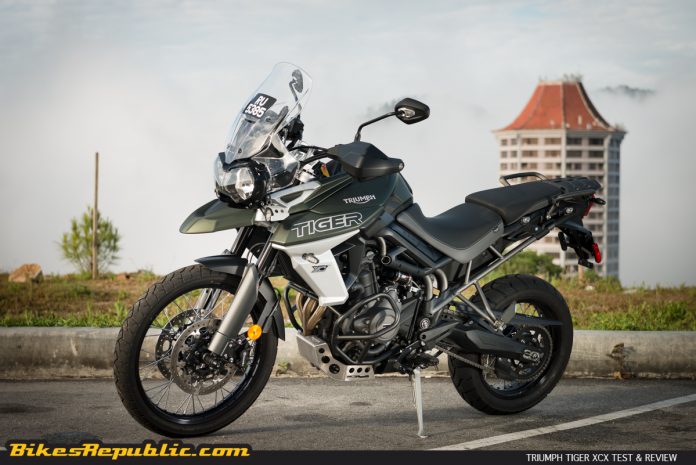 Other than reading about motorcycles and technical literature, I love science fiction or sci-fi, in short. I used to love thriller novels but I’ve since discovered that sci-fi forces us to take a hard look at ourselves in the face of our fascination with technology.

There are many great works. Ted Chiang comes to mind – he who wrote “The Story of Your Life,” which was made into the seminal movie “Arrival.” But even more profound and important were the literatures penned by the late astronomer Carl Sagan. It was him who wrote the story, “Contact” which became the basis of the movie of the same name, starring Jodie Foster and Matthew McConaughey.

In that book which details the impact of man receiving a message from the extraterrestrials, there was one important line which has become a favourite quote for physicists and astronomers including Professor Michio Kaku and Neil deGrasse Tyson in describing the technological parity between “them” and us.

We were fortunate to ride the new Triumph Tiger 800 XCx prior to its launch at The Greatest Triumph Malaysia Grand Dinner at Bukit Tinggi recently and the early impressions bowled every motojournalist (including us) off their feet. 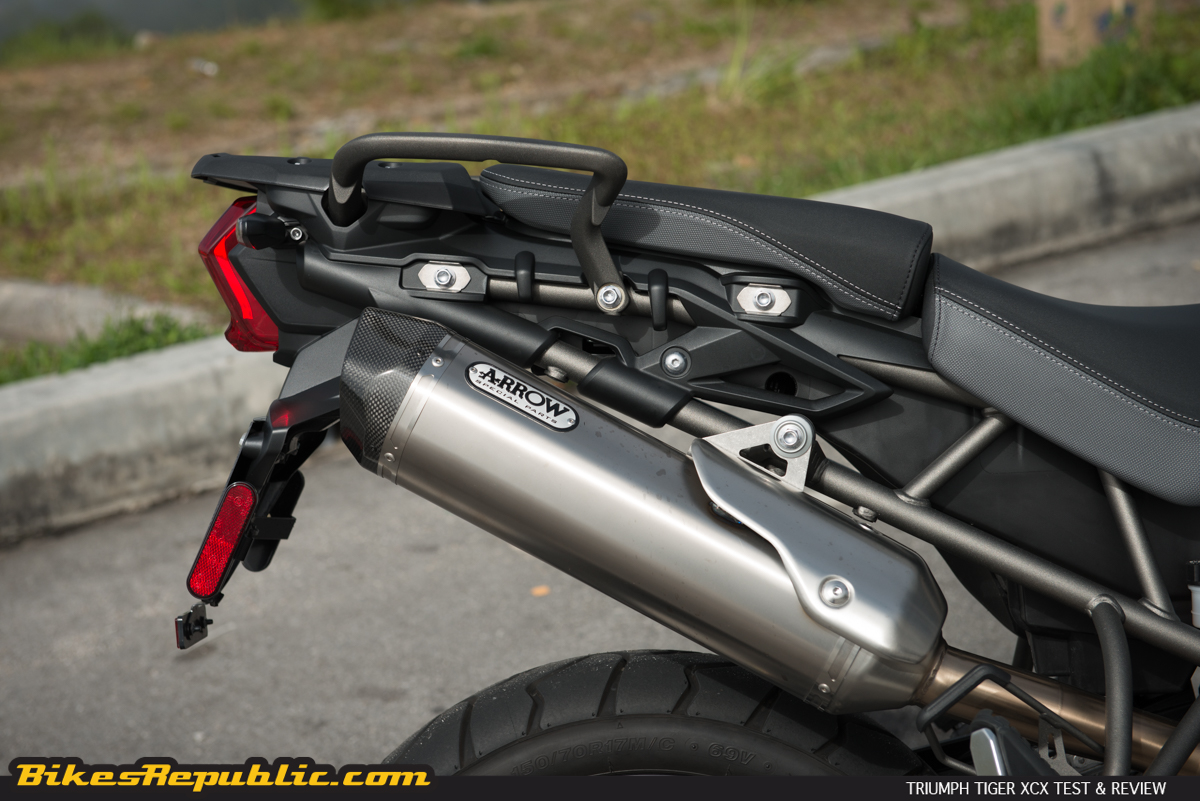 We missed the Tiger 800 XCx so much since that first ride. There was something about it that was so inviting and endearing. Could it be the confidence it exudes? The look? The sound? 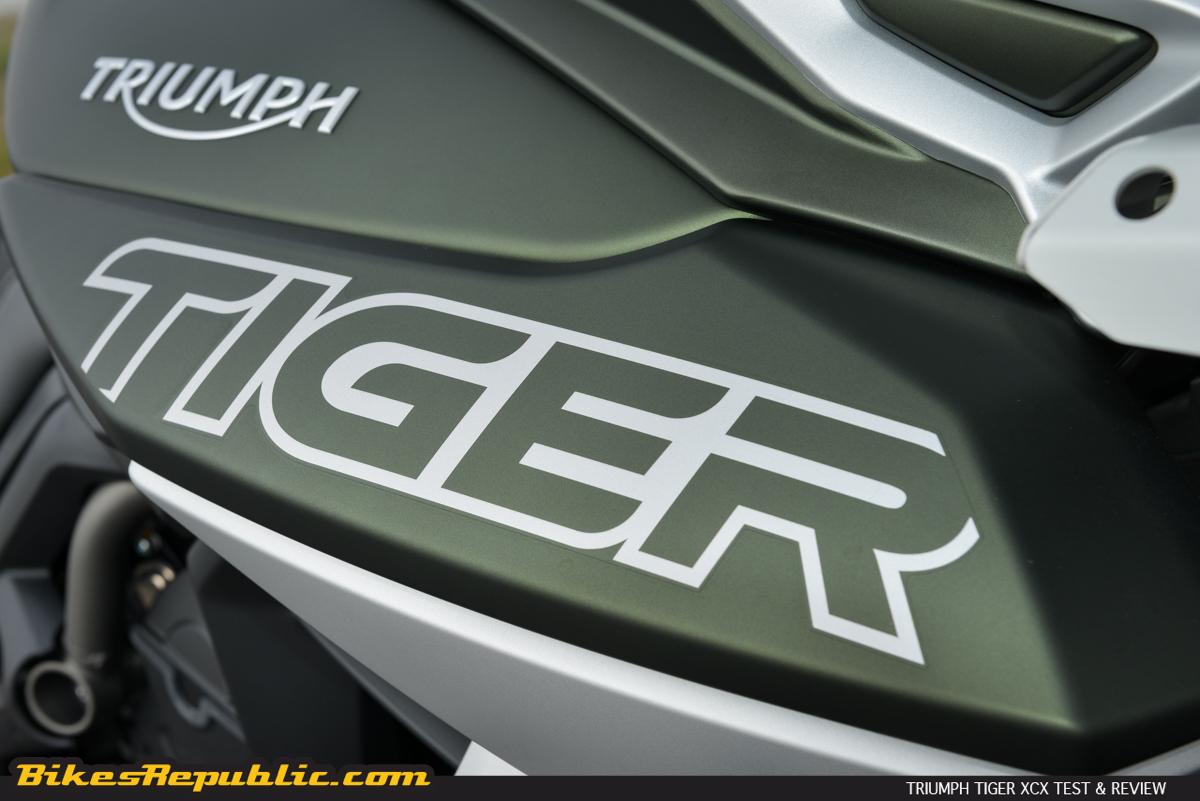 The Tiger 800 XCx lineage is one of my personal favourite bikes, ever since riding the 2015 model to the Khao Sok National Park in Thailand with the RATPack. I just couldn’t believe how good it was at the time and even up until recently. I started to wonder how Triumph could ever better it with the new, fourth-generation model. In fact, I was worried if the Tiger 800 had reached its zenith. 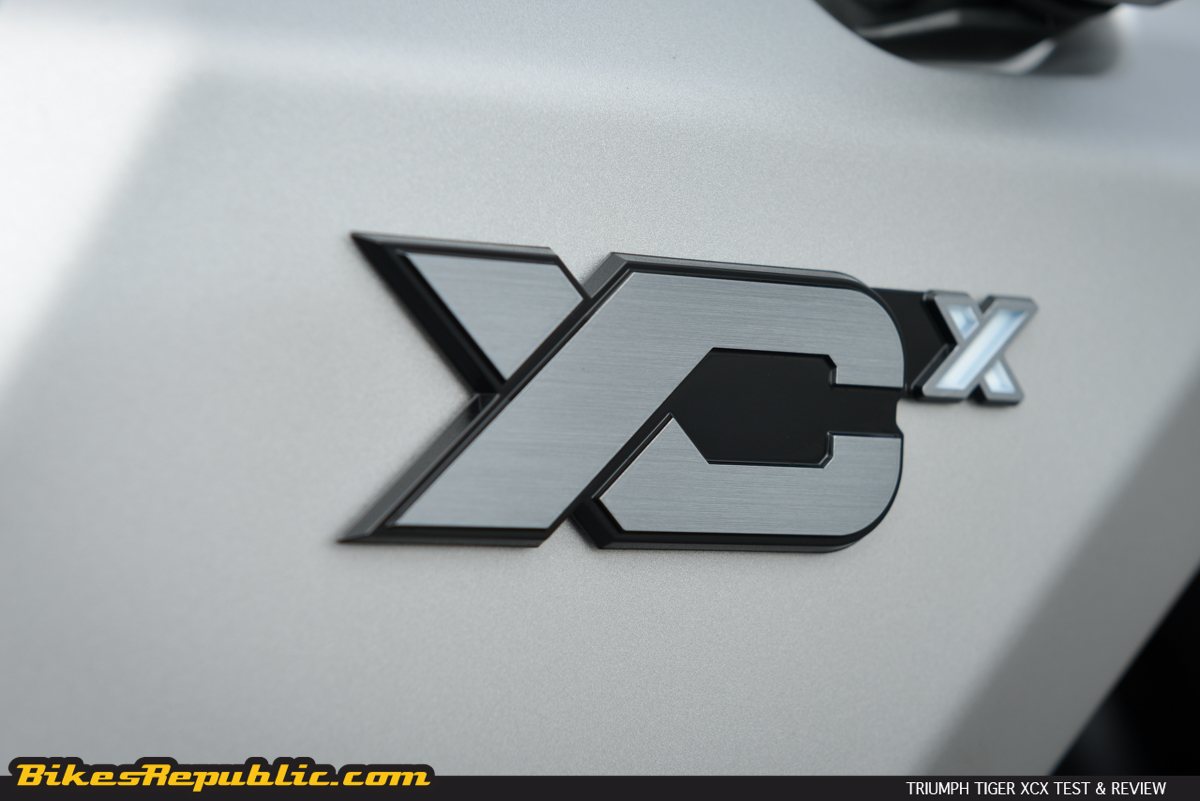 Triumph did it. They just did it. They went ahead and made the Tiger 800 even better than an already splendid bike. 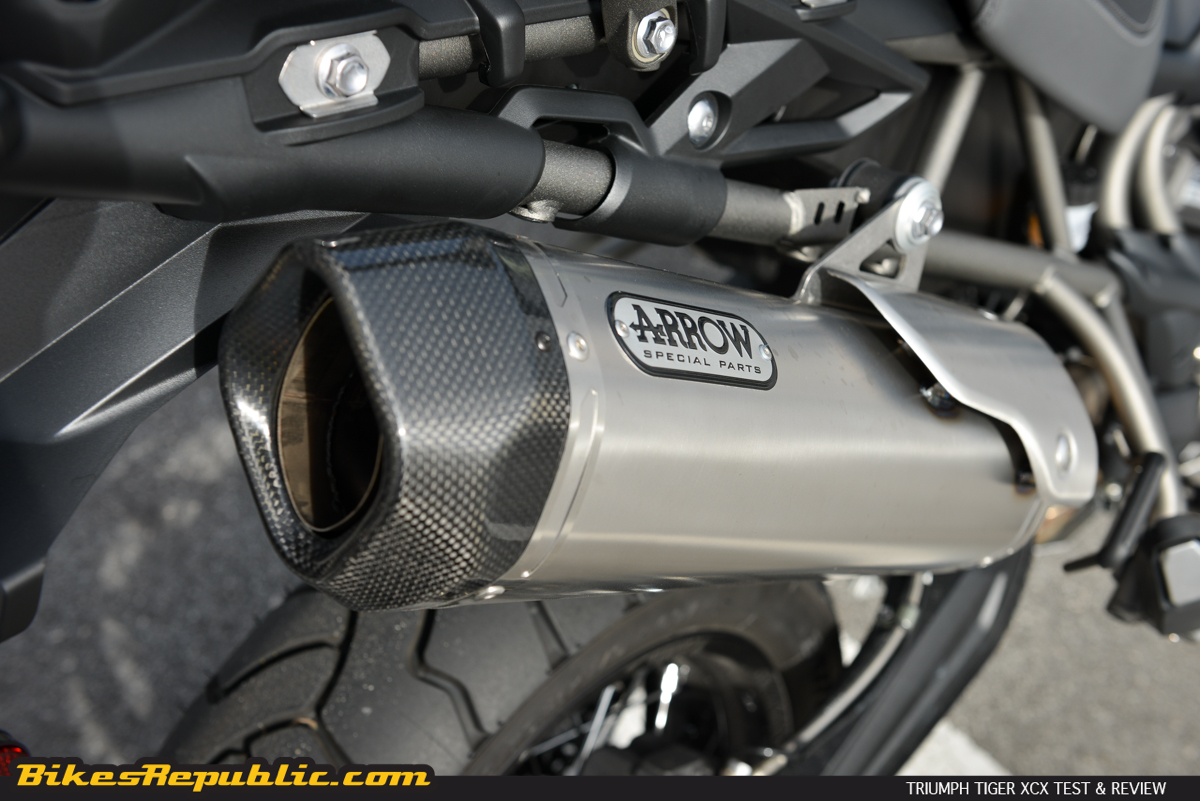 For starters, Triumph did a great job of making the new bike look fresh and attractive without resorting to a Korean plastic surgery. It drew in admiring looks everywhere we parked. Although looking vastly similar to its predecessor, there were many differences throughout. There’s a huge and adjustable transparent windscreen, new 5-inch colour TFT screen adopted from the Street Triple RS along with the switchgear, updated cruise control (only one switch), LED Daytime Running Light (DRL), Brembo brakes, recalibrated WP suspension, Triumph Comfort seats, and a new exhaust.

The real updates in the engine and chassis, however. In fact, Triumph revised, updated or replaced 200 items in these areas alone. 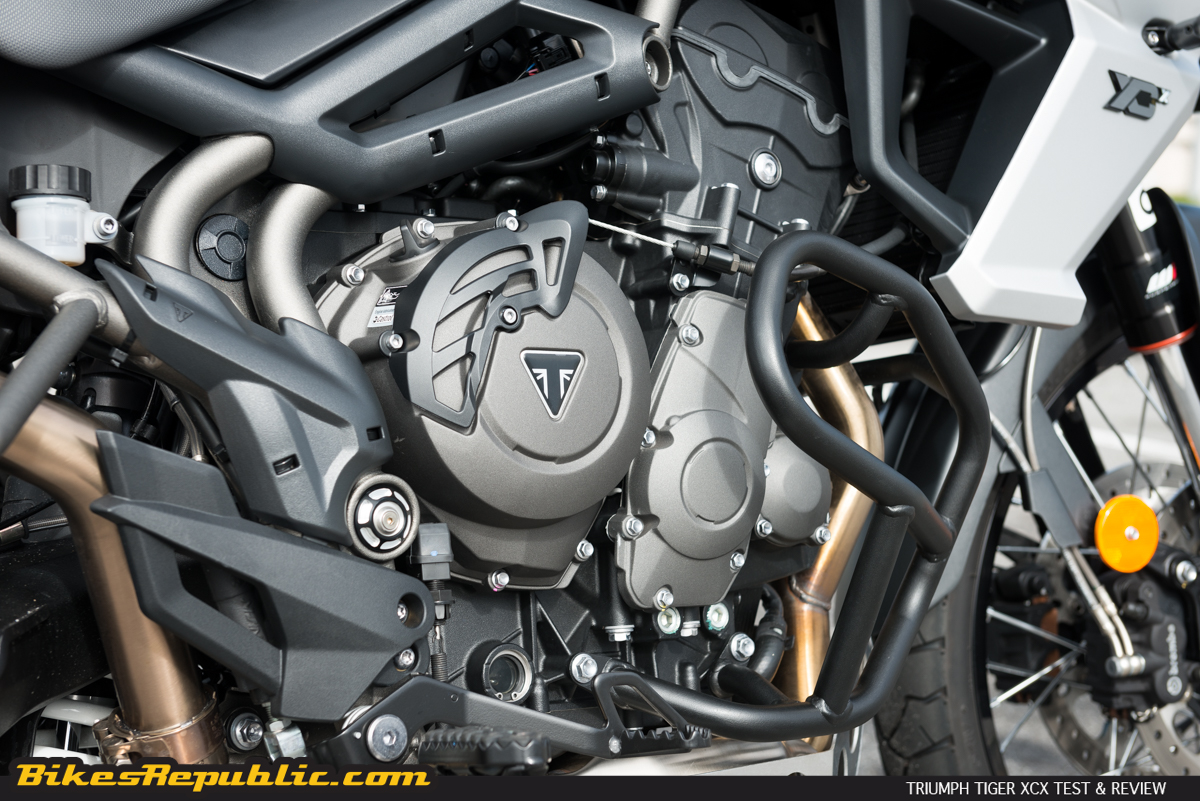 The new Tiger 800 XCx seemed a little taller than before, possibly due to the thicker new seat. Nevertheless, reaching the ground wasn’t difficult as the bike has a narrow waist and the sidestand was easily within reach. The seating position was slightly more relaxed as the handlebar has been moved 10mm backwards to bring it nearer to the rider.

The TFT display was easy to read in all lighting conditions and scrolling through the menus was intuitive. It took us only 5 minutes to learn.

You feel you’re fully involved with the bike as soon as you grab that handlebar and start riding. Every input is taken care of smartly, instantly.

The reworked WP forks made the bike feel extremely stable when coupled to the the 21-inch front wheel. Because of that, the front wheel seems to create an invisible groove in the road. The bike not only goes where you point it, it follows that line to millimeter perfection. It made the previous edition’s front end feel “flighty.” However, due to my height which located my weight over the rear, the front felt a little heavy to turn in and stiff when hitting bumps. Decreasing the compression damping by just 3 clicks – not full turns, but just click, click, click – transformed the Tiger into a large super-flicklable and fluid trail bike. Despite of that, it remained supremely stable whether it was travelling in a straight line, or scratching its footpegs when on its sides. If there’s ever any doubt about having a bike with a 21-inch front wheel, the Tiger 800 XCx tears those doubts into ribbons.

And it was darn fun to ride. I’m never a morning person, but I found myself waking up at 4am just to prepare to ride it up to Genting Highlands to catch the first rays of the sun, three days in a row.

I’ve never liked riding on the Karak Highway in the dark either, but the Tiger 800’s headlamps threw so much light down the road it startled even sleepy truck drivers. And I haven’t even touched the high beam and foglights yet! Rider confidence stems from the ability to see where he’s heading and those lights helped even through the thick fog as I headed up the mountain at 5.30am.

Anyone knows just how bumpy and treacherous the Genting road is. The Tiger 800 XCx didn’t care whether if there were bumps, potholes, some sand, damp surface, paint strips – it just kept going. The ability of doing these things was disconcerting at first, but once it sets in, all you need to do is to stop worrying and have fun.

What I truly appreciated, though, was Triumph’s emphasis on giving their bikes exceptionally smooth throttle response. I went through all the modes – SPORT, ROAD, RAIN, OFF-ROAD and OFF-ROAD PRO – none of them was snatchy from off-throttle, mid-throttle, rolling off the throttle and even snapping it shut. The engine is now more responsive, yet not abrupt. Amazing.

The throttle character is true for all Triumphs but it was extra special on the Tiger 800 as the engineers have removed the backlash gear in the transmission.

The previous Tiger 800 felt like it had a slipper clutch when it didn’t, giving it a good amount of engine braking together with smoothness as you go into in a corner with the throttle off. On the new Tiger 800, on the other hand, the mix of engine braking and “freewheeling” was spot-on, as if the transmission has a computer-controlled back-torque limiter. Only thing was it didn’t. Kudos, Triumph!

The updates to the engine gives the Tiger 800 the tiger’s gallop anywhere in the rev range, in any gear. The power was just smooth, linear, predictable. Never once did it threaten to charge ahead with the rider flailing behind. A predictable power delivery is the dream of every rider, including the pros (critical for the pros, actually), because how can one enjoy a bike that has its own mind when you crack the throttle open?

When I took it easy on the first trip up, I didn’t even have to go lower than 3rd gear through the sharpest corners, in ROAD mode. On the second trip, it was SPORT mode on Karak Highway and ROAD mode up Genting. The weather was clearer and I managed to hustle the bike through the curves much faster than I thought possible for an adventure bike. On the third morning, it was SPORT mode all the way. The XCx just hammered into, through and out of the corners like a sportbike with high handlebars, but with the benefit of not needing to worry about the whatever road condition. 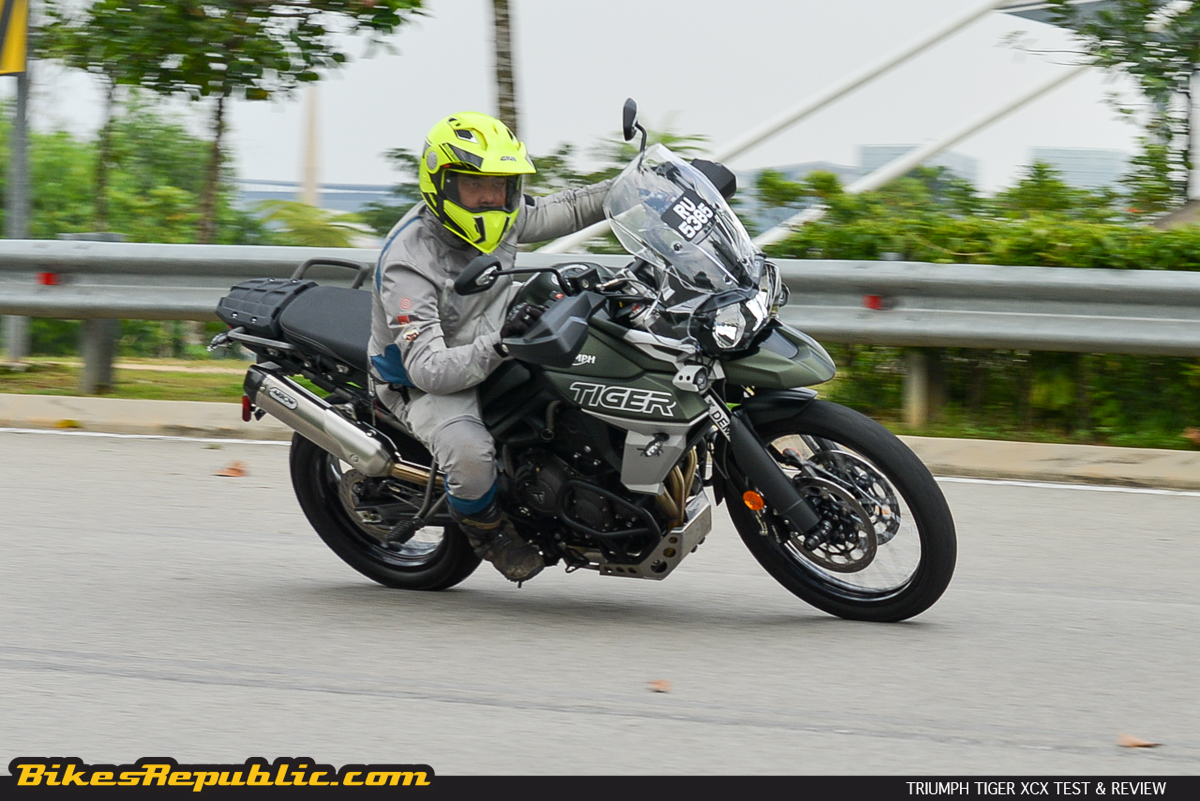 We also got around to testing it in the dirt, with the help of “Foreman Oh” Kah Beng at his Most Fun Gym motocross and off-road riding school.

He first went out in OFF-ROAD PRO, which switches off traction control and rear ABS, and leaving the front ABS on. He went straight to performing powerslides, riding it through a corner on the berm and jumped. He came back in and set the ride mode to OFF-ROAD, which leaves all intervention on. He was amazed, “The traction control was never intrusive, it only felt like the engine was holding back slightly but it didn’t cut you off. It’s crazy!”

On handling, “The bike has a great balance and footing – somehow nimble and stable at the same time. That’s not something which is easy to achieve. Plus, the narrow waist gives you the ability to hold it with your knees.” It’s the testimony of Triumph’s emphasis on handling rather than outright power.

The new, shorter first gear also helped heaps when we circled around a set of pylons by slipping the clutch, instead of using the throttle.

When you stand up on the pegs and look down, all you see is the TFT screen, while the tank and triple clamp disappear from sight. It means that the bike has placed your upper body over the tank hence weight onto the front tyre – that’s the ideal riding position for riding off-road. But while standing up is mainly done off-road, it should also be done on the road when you encounter obstructions or rough roads. This bike’s riding position is there to help you with that.

That’s the Triumph Tiger 800 XCx. It’s so good when you ride it on the road that you forget that it’s also very capable in the dirt; and it’s so capable off-road that you completely forget about how good it is as a road bike.

I’ve tested bikes that I just rode from A to B, plus a bit more for shooting duties and parked them up. The Tiger 800 XCx, conversely, due to the combination of a finely designed seating position, superb windscreen, awesomely comfortable seats, and confidence just keeps begging me to go out riding. We received the bike with 673km on the odometer. It read 1550km when we returned in after 5 days, 4 nights. I couldn’t help staring it for god knows how long when I do park it up, either. 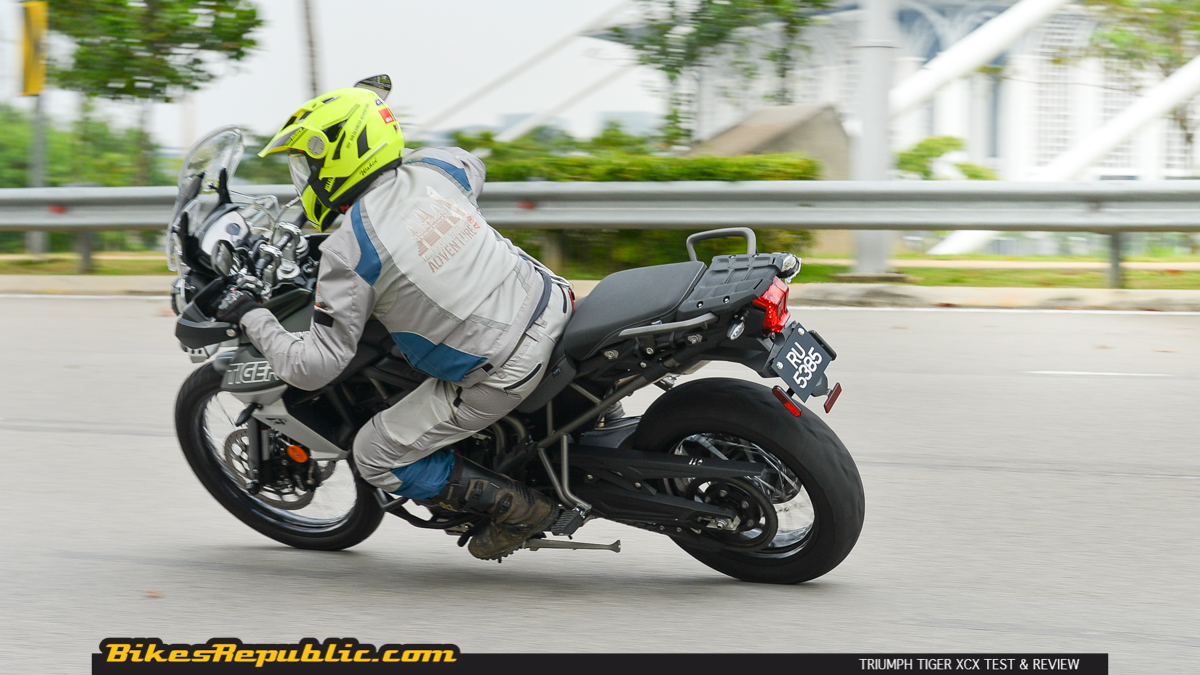 Anything negative? The handlebar buzzed around 5000 RPM, but we soon got used to it and it “went away” since it wasn’t upsetting.

I’d better stop here as I’d just keep heaping superlatives on the Triumph Tiger 800 XCx, if I continue. I’m really tempted to call it “The Best Adventure Motorcycle” but the only thing keeping me from doing so is its brother and bigger cat: The Tiger 1200, which we’ve yet to test. At this moment, though, it is the best middleweight adventure motorcycle, bar none. 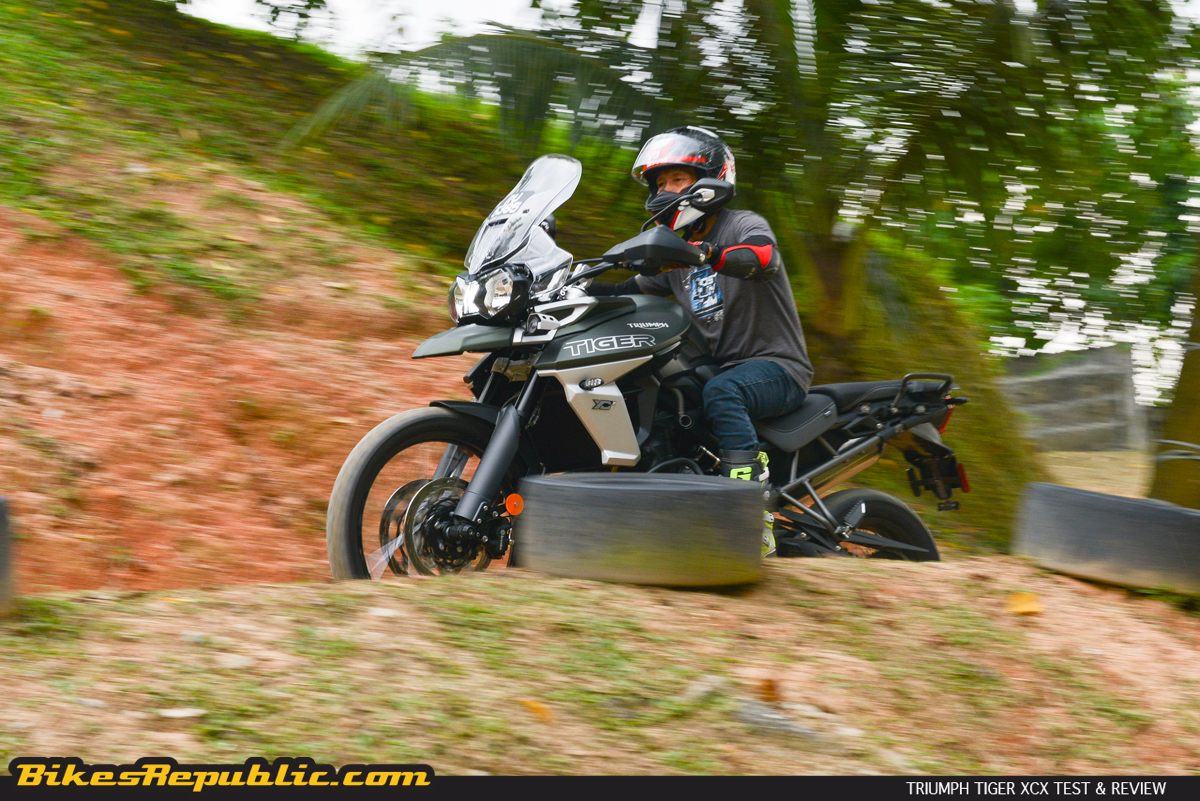 Oh yes, what’s that poignant Carl Sagan quote? “The artifacts of a sufficiently advanced extraterrestrial civilization would be indistinguishable from magic.”

Wait, how’s that relevant since the Triumph Tiger 800 XCx is very Earthly in origin? It’s so good it’s almost magical that it might as well had been made by an advanced alien civilization. 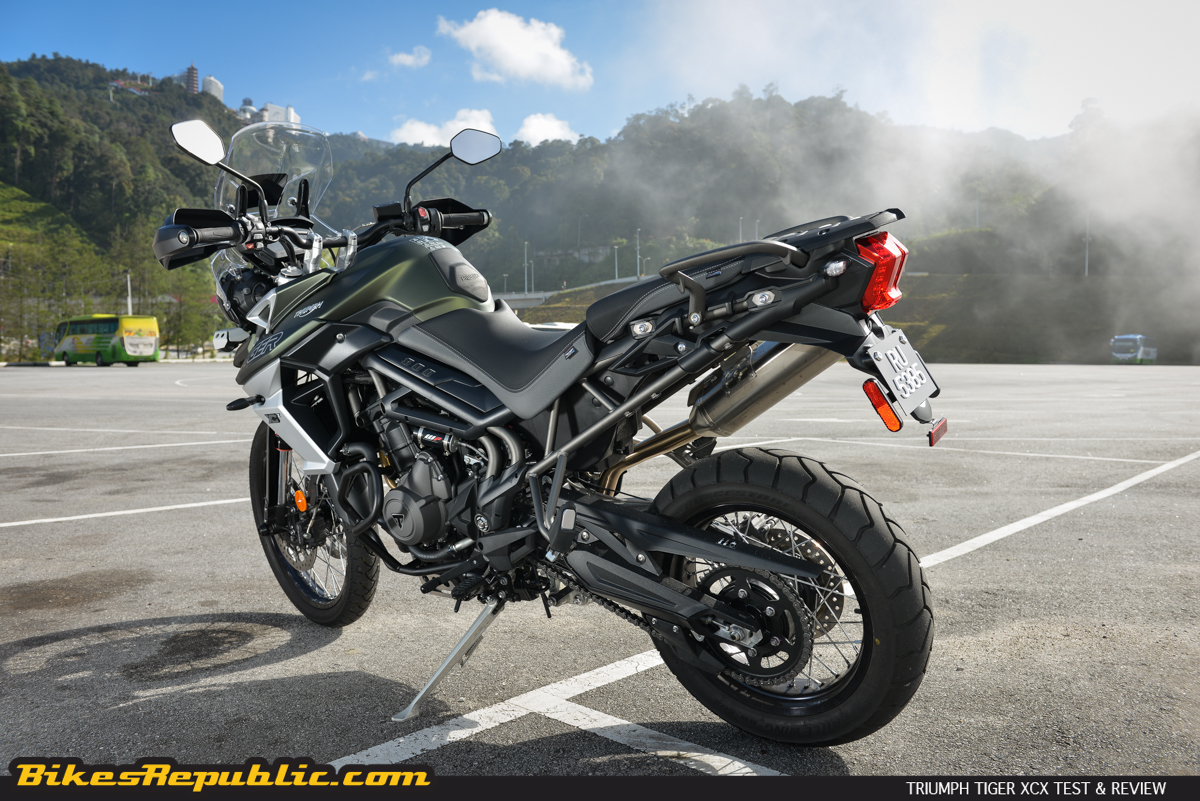