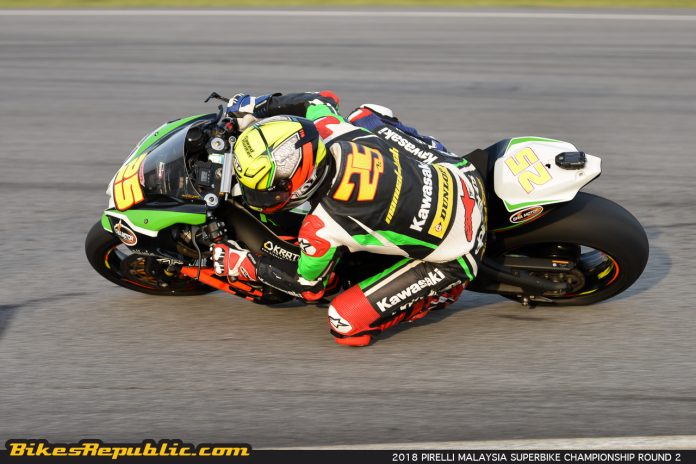 As opposed to the previous day (Saturday, 28th July 2018), Sunday started out bright and sunny for the final day of the 2018 Pirelli Malaysia Superbike Championship (MSBK) Round 2. Rain was forecast for the weekend, but the thick clouds had thankfully only surrounded the Sepang International Circuit (SIC) without encroaching its airspace. 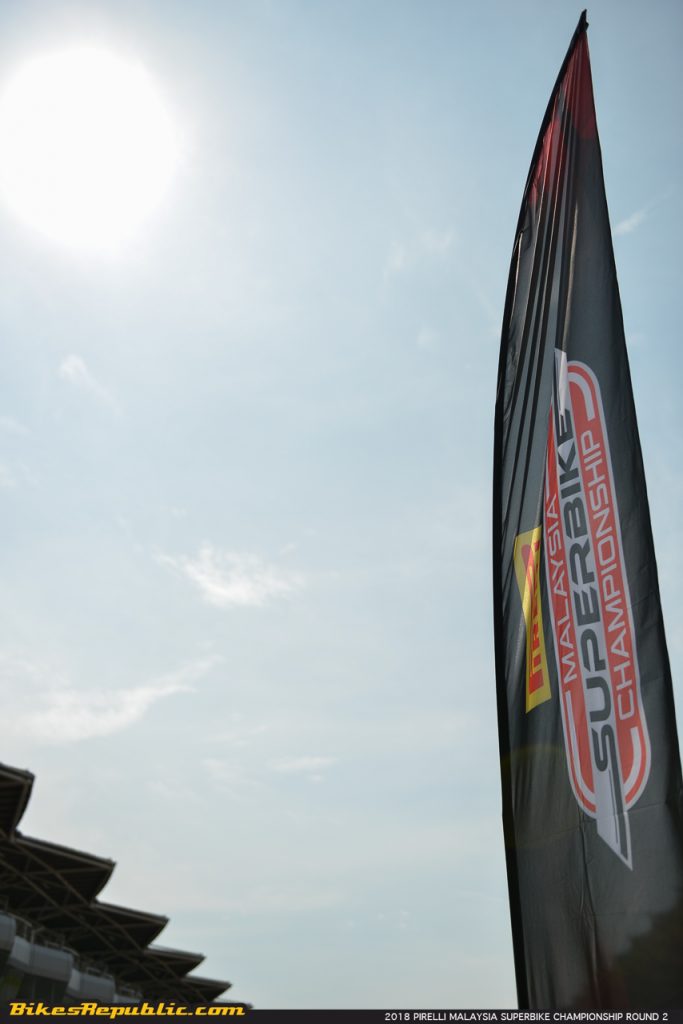 Without Free Practice, the hectic schedule was bumped up to earlier times of the day. Also, the races for all classes were shifted to different times to break some of the familiarities the riders may have developed.

The Supersport riders were the first to head out at 10am. The sun had heated up the tarmac enough for anyone to feel the radiating off it.

Muhammad Helmi Azman (#32) of SCK Rapido Hi-Rev Honda Racing had won Race 1 on Saturday and he was determined to do the same for today. 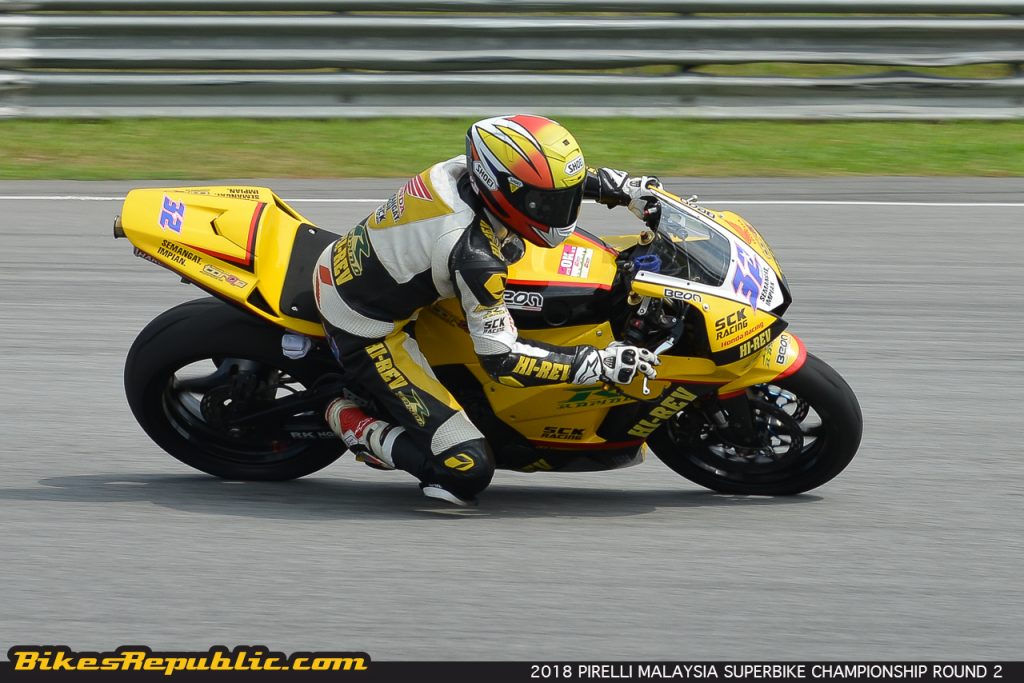 He shot straight out of his grid position into Turn One in front of the field, while national Moto3 rider, Adam Norrodin (#70) of SIC Junior ZK Racing Team was caught in a battle with 4 other riders.

Muhammad Helmi didn’t wait around and consolidated his lead by circulating 1.3 seconds per lap faster than the 2nd-placed, and eventually recording the fastest lap time of 2:12.451. He only backed off with 3 laps to go.

Adam had fought his way up to 4th and had to fight hard with Liam Taylor MacDonald (#37) from New Zealand. Adam eventually passed MacDonald and started to set fast times in an attempt to break free. This he did and held on to take the 2nd step on the podium, 10 seconds behind Muhammad Helmi while MacDonald cross the line another 10 seconds behind Adam. 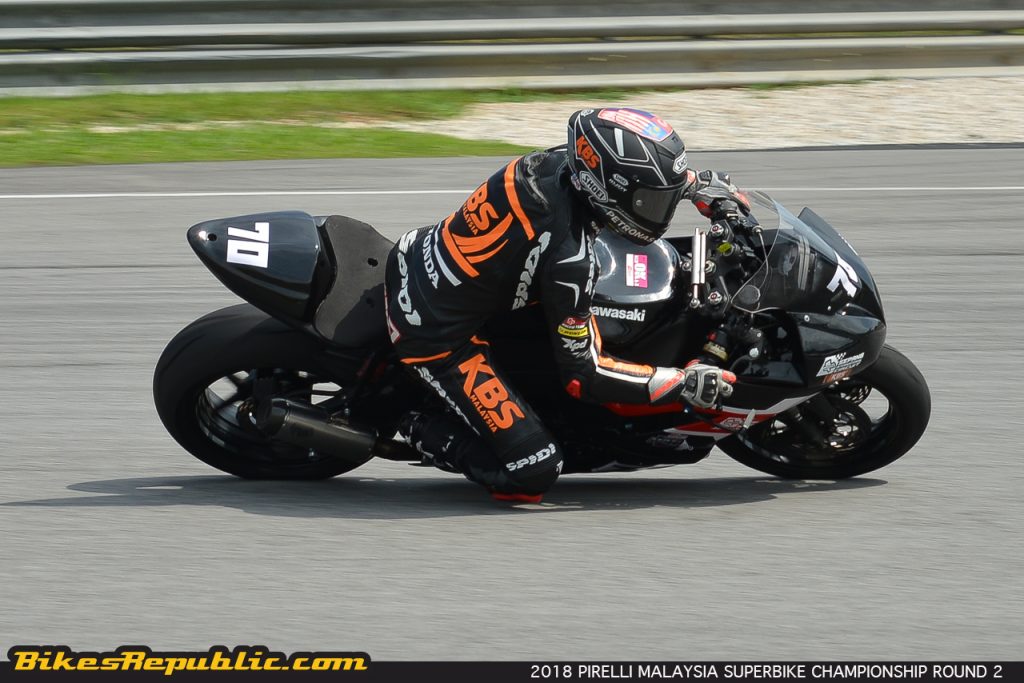 The heat took its toll on tyres as the bikes were visibly sliding around towards the end of the race.

It was another exciting race to look forward to after the previous day’s hot track action. But it turned out to be even more frenetic than expected. 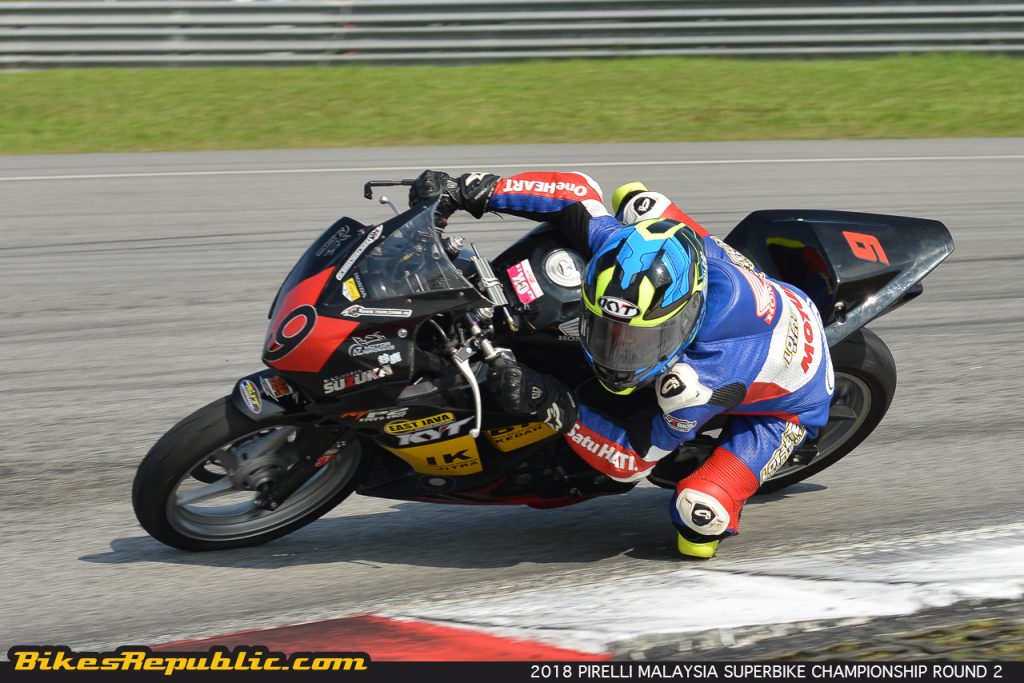 That set the field loose to set up their pace and battle hard among themselves. Surya’s Promax NJT IKBN Jitra Racing teammate Luth Harith B. Erwan (#71) rode hard and pulled away on the last lap by recording the fastest lap of the race the process to win by a mere 1.748 seconds in front of Jailani Kosman (#55). Muhammad Aiman Thiruddin followed home in 3rd under a second behind Jailani (#72). 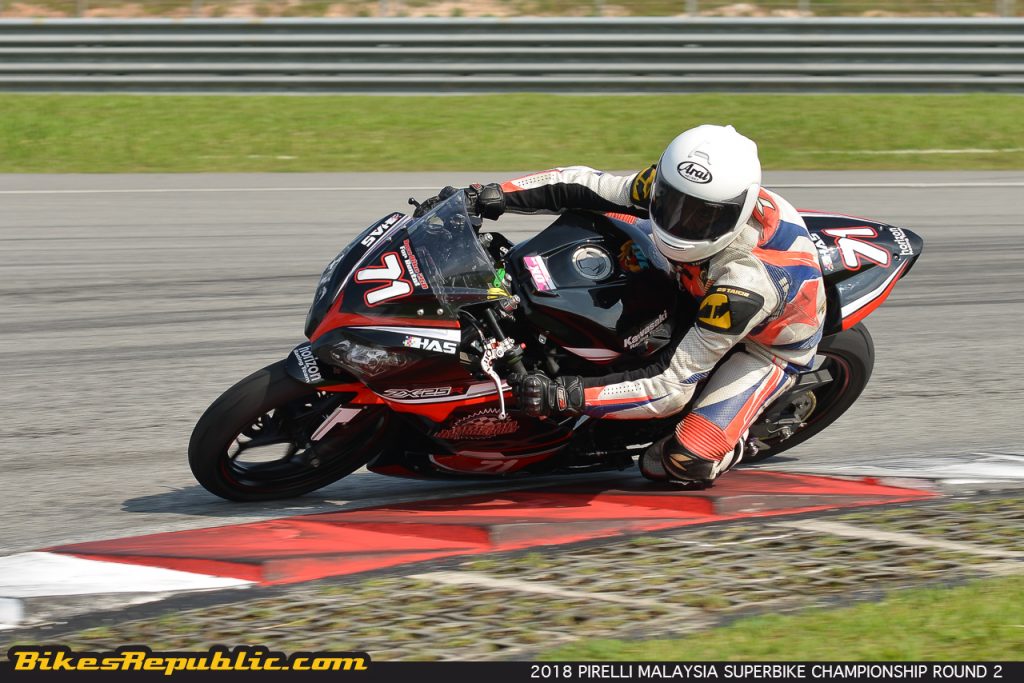 There some serious action down the field with riders showing each other with elbows and knees. Another rider was run off the track as they headed down the Start/Finish straight.

Azroy Hakeen (#32) ran away with the previous day’s race, but it was not to be on Sunday.

He had a lightning start and was far ahead of everyone else after Lap 1 and it looked as if Race 2 was in his pocket. 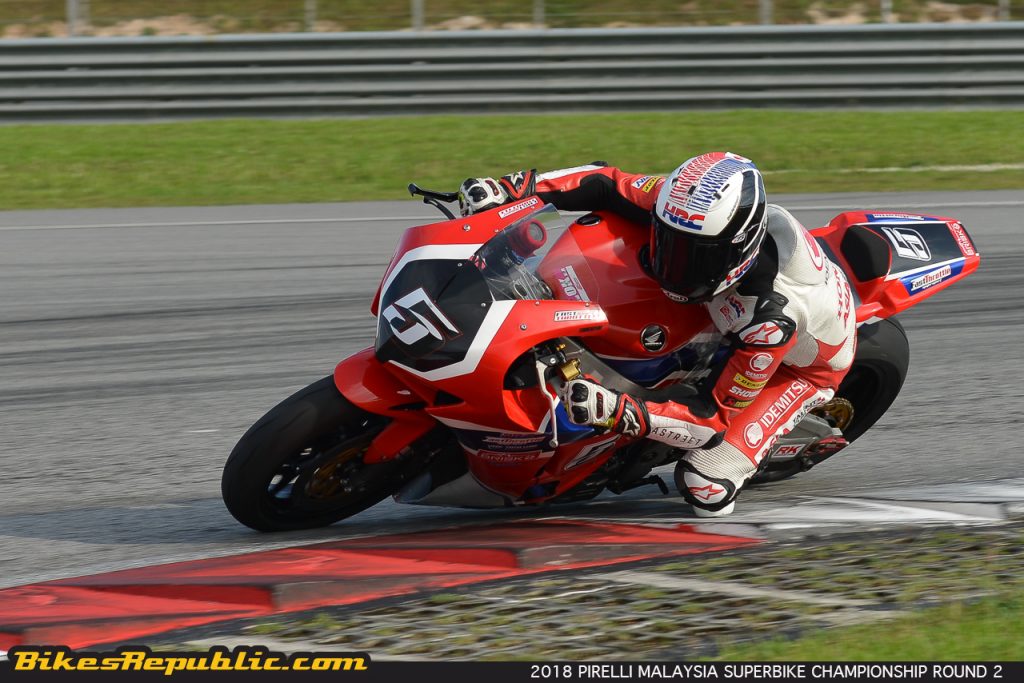 Unbeknownst to him, Amirul Hafiq Azmi (#80) was making his way up the field after a poor qualifying spot. He picked off one rider after another but had to fight through from 5th to 2nd position. He then started to hunt down Azroy after dispensing with the others.

Amirul rode an incredible race and was on Azroy’s tail by the 5th lap. However, the former shadowed the lead rider closely. It was apparent that Azroy’s speed was in Sector 1, as he opened up a gap everytime after they passed Turns 1 to 3, but Amirul would catch back up and started to force Azroy into a mistake. 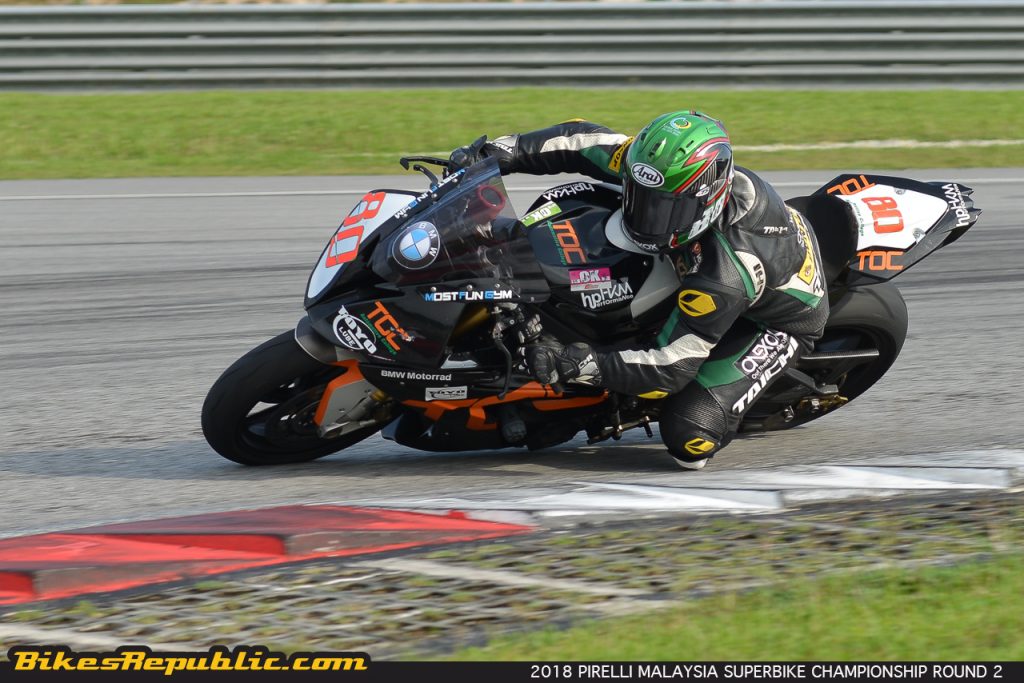 The real chance came on the last lap as Azroy appeared to have braked too early for Turn Four. Amirul outbraked his rival and went straight into the lead and win. As a side note, the TOC-HKM Racing Team are the defending champions in this 2018 Pirelli Malaysia Superbike Championship (MSBK) series.

In 3rd was Ahmad Khan who had to battle with 3 riders to finally earn his podium position.

If the World Moto3 Championship provided all the thrills during MotoGP weekend, the ATC probably had more of it. These plucky teens had no fear and the rode with their hearts on their sleeves. And oh, what a welcomed addition to the 2018 Pirelli Malaysia Superbike Championship (MSBK) it was! 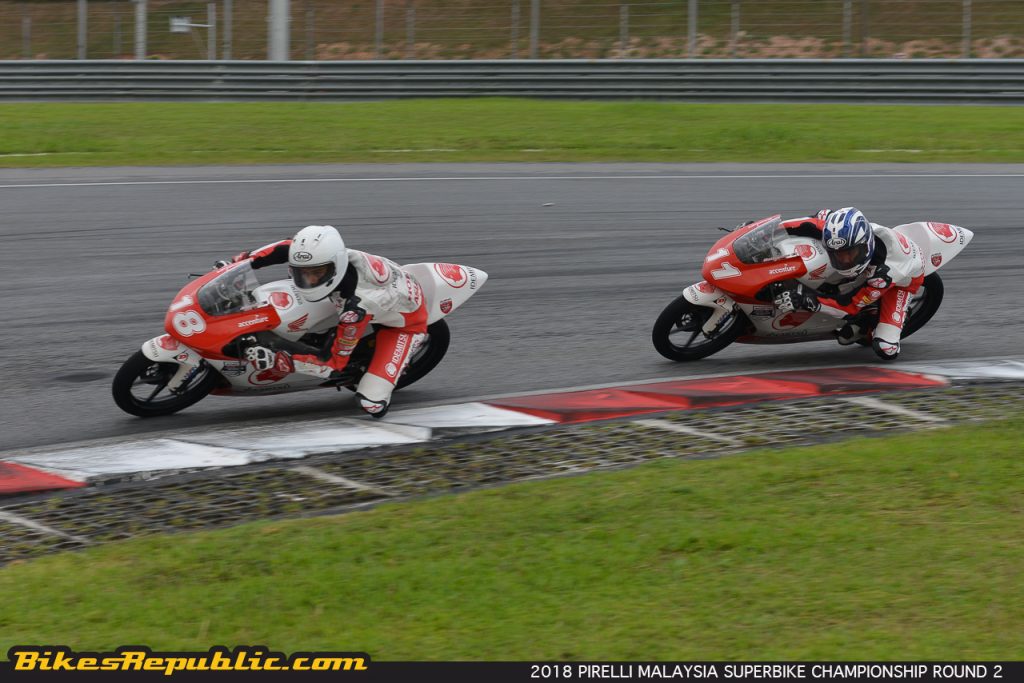 There were numerous lead changes in Lap 1 alone, but Haruki Noguchi (#9) managed to break away when Australian Bill Van Eerde (#19) and Takuma Matsuyama (#11) started battling with each other. But Ven Eerde got the better of Matsuyama and took off, recording a blistering 2:18.890 lap time, leaving the latter to fall into the grasp of fast approaching Sho Nishimura (#3).

As Van Eerde chased down Noguchi, Nishimura chased down Van Eerde to set up a three-way battle for the win. The riders behind Noguchi must be thinking, “You can run but you can’t hide.”

Nishimura then pulled off an amazing pass on both riders to lead into Sector 4 of the last lap. With Noguchi and Van Eerde in a slipstream train, Nishimura hung on the left side of the backstraight leading to the final Turn 15, which would set up a tight, defensive line through the corner. 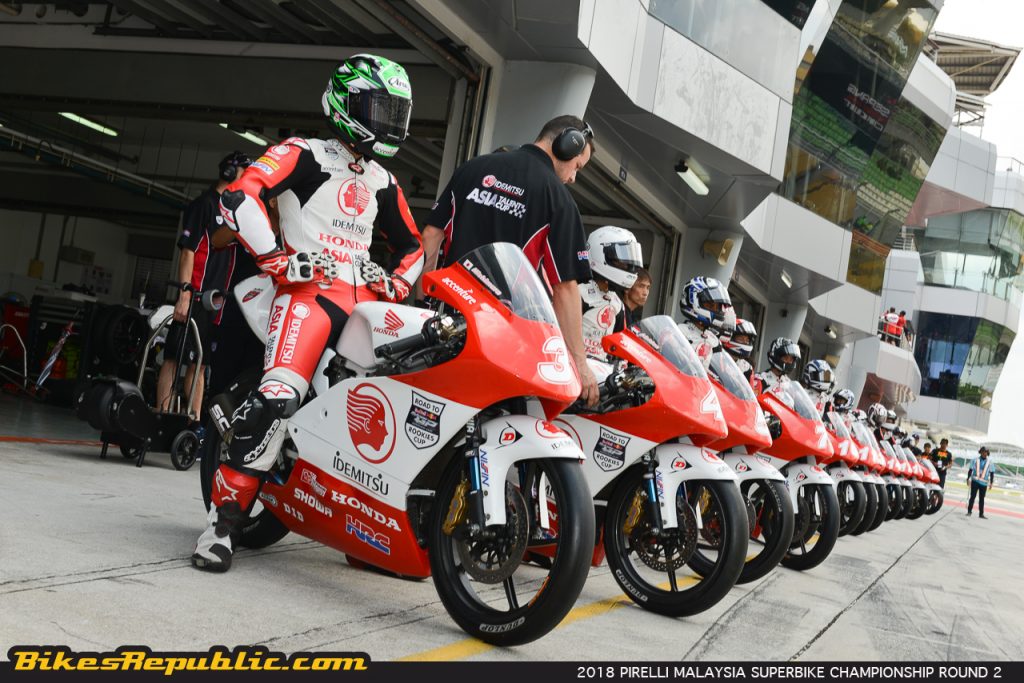 As they sat up to brake for the final turn, Van Eerde swung to his right to go back onto the normal racing line and swung into the corner. His audacious move served to block-pass Noguchi and put him directly in Nishimura’s slipstream as they blasted toward the finish line.

Van Eerde’s gamble worked as he slingshot past Nishimura to win by just 0.012 second, with Noguchi 0.102 second behind Nishimura for 3rd.

This was why we decided to refer to ATC as “Asian Teen Combat.”

It was beyond doubt that Azlan Shah Kamuruzaman (#25)  and Chia Motor PJ Kawasaki were the combination to beat in the Superbike category of the 2018 Pirelli Malaysia Superbike Championship (MSBK) category. Their experience and combination had netted them the championship lead from Round 1, and their domination continued into Round 2 by capturing the Pole Position and Race 1 win on Saturday. 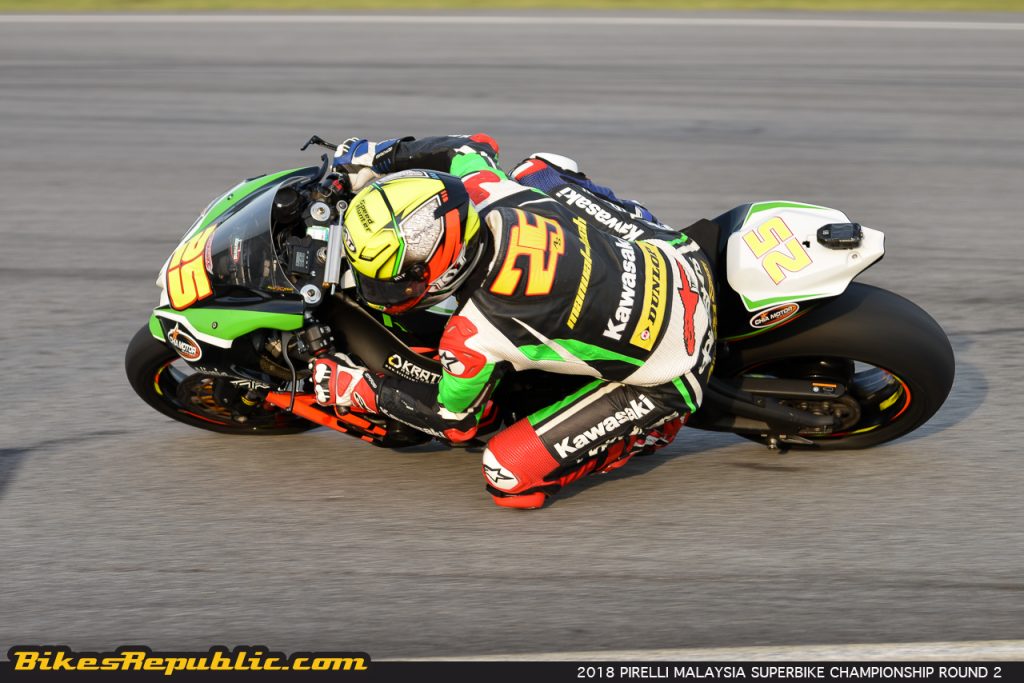 Race 2 started with Azlan’s taking the holeshot from his closest rival, Rajini Krishnan (#67) from India into Turn 1. But Azlan missed his braking marker and almost ran into Turn 9’s gravel trap and allowed Rajini into the lead.

Azlan was still in 2nd as they started Lap 2 but it was now Rajini’s turn to overshoot into Turn 9’s gravel trap, allowing Azlan to go past and he (Rajini dropped to 5th place). 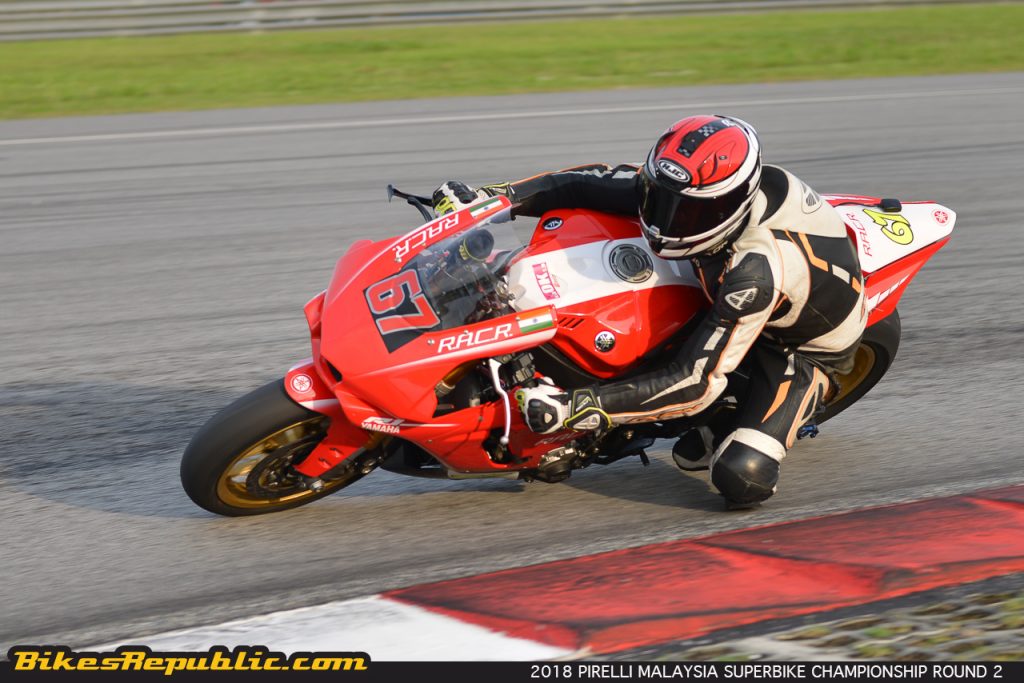 From that point on, Azlan turned in lap times in the low-2:10s, faster than everyone else.

In the meantime, Amirul Hafiq Azmi (#80) of TOC-HKM Racing Team fought up the field to hunt down Swiss rider Jonathan Serrapica (#48) for 2nd position. Amirul passed Serrapica into Turn 7 on Lap 6. 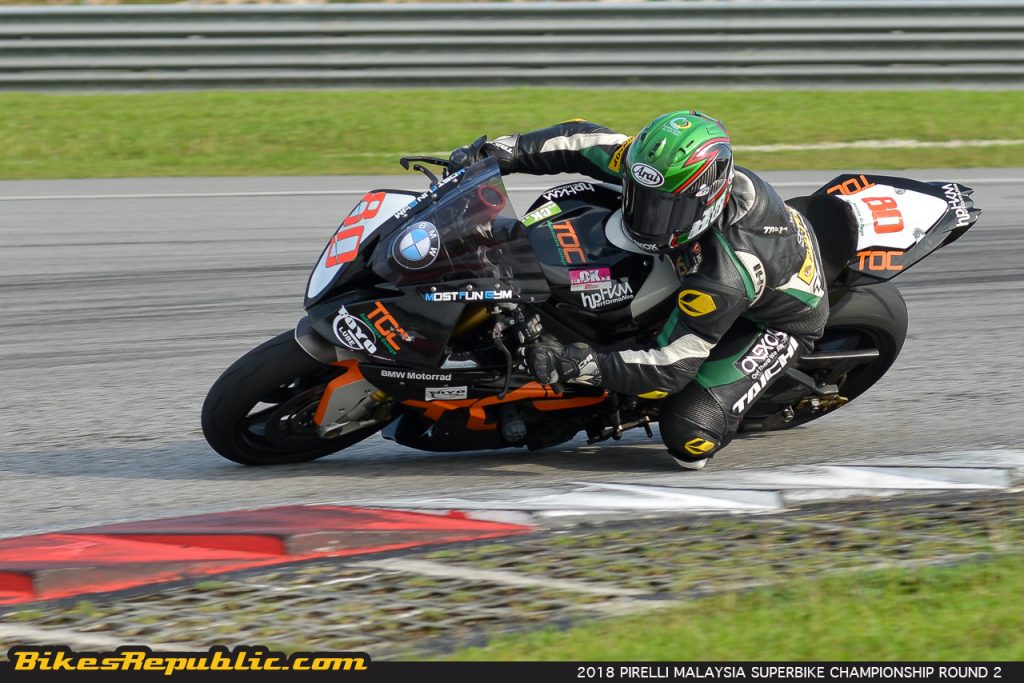 Rajini had recomposed himself at this point and overtook Serrapica on Lap 8 and chased down Amirul and pass him Lap 9 into 2nd position.

With Azlan nearly 20 seconds in the lead, it seemed that Rajini will come home in 2nd. But alas, he ran off Turn 9 again on the very last lap and was passed by both Amirul who took 2nd and Serrapica 3rd places, respectively, to finish 4th. 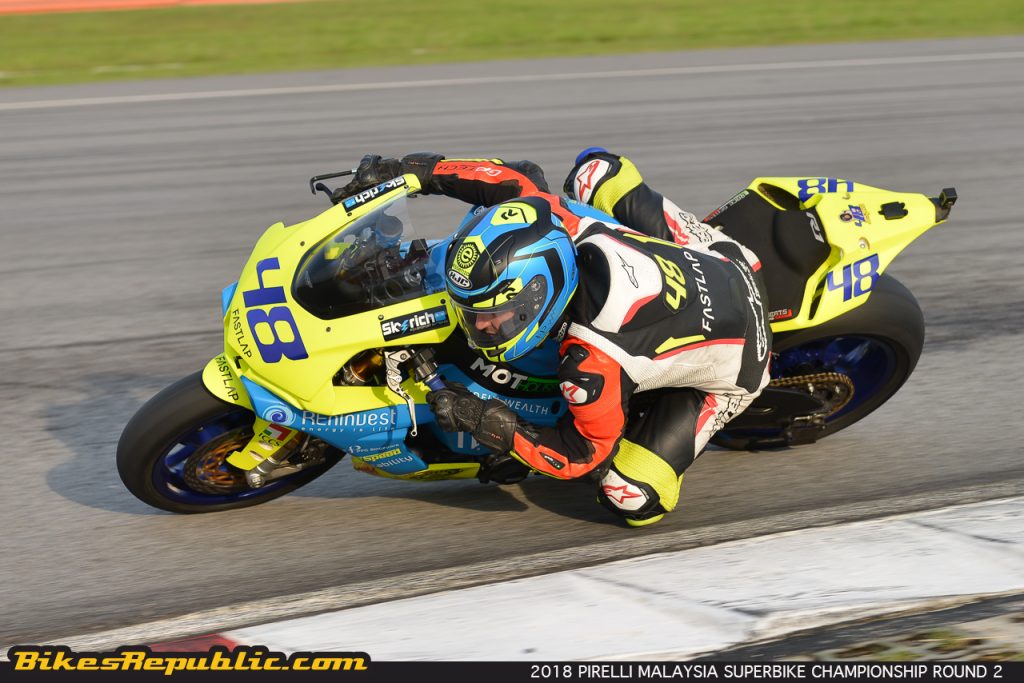 All six competitors started the race but two riders crashed out to leaving the four remaining riders to race it out. 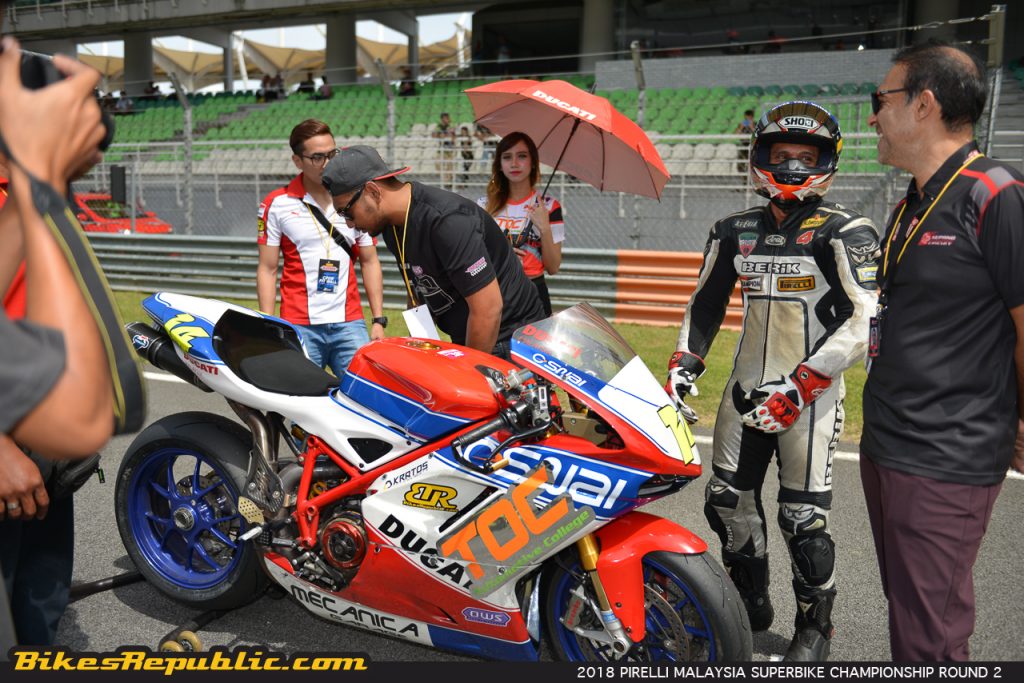 The conclusion of the race wrapped up MSBK 2018 Round 2. 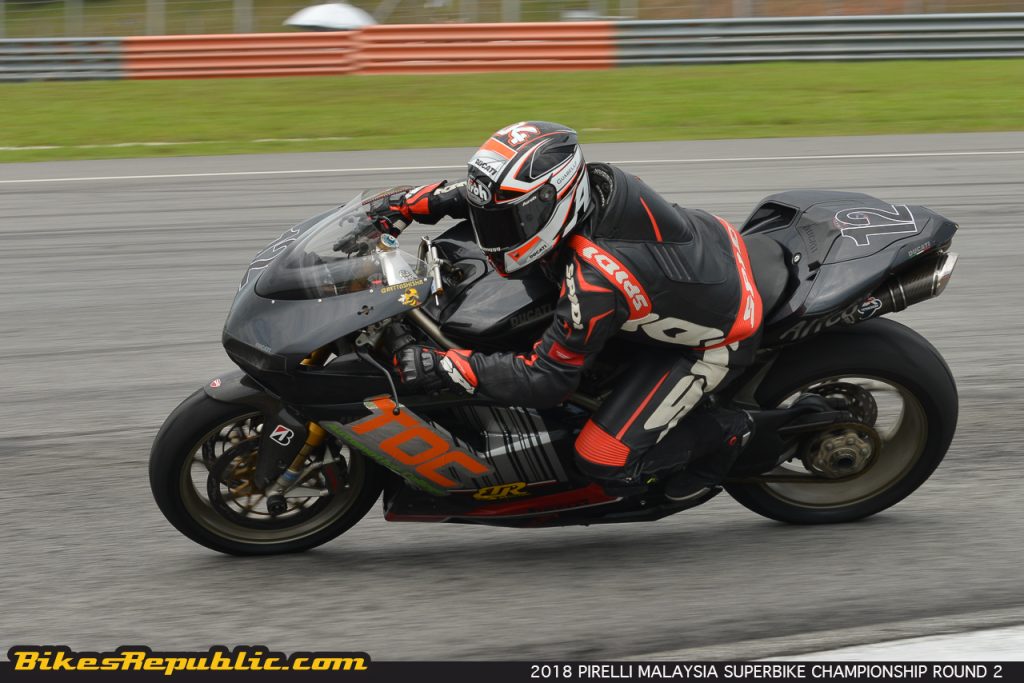 The 2018 Pirelli Malaysia Superbike Championship Round 2 saw some unforgettable action over the entire weekend. The addition of the Idemitsu Asia Talent Cup and TOC Desmo Cup certainly brought lots more attraction and prestige to the series.

In the two-month hiatus, it seemed that many teams have improved their level by very much to make most of the races exciting affairs. The bikes were also visibly better prepared than in Round 1.

The Sepang International Circuit (SIC) had also tightened their security protocols for Round 2, after having too many friends and relatives of riders and teams in the paddock during the Round 1. There were incidences of young children running across the hot pit road during that race. A less crowded paddock also meant that the teams could focus more on their business.

But there are a couple of things we could gripe about.

Still, it was a great weekend as the weather held up for the races. Round 3 of the 2018 Pirelli Malaysia Superbike Championship (MSBK) is from 14th to 16th September 2018 at the Sepang International Circuit (SIC). See you there!