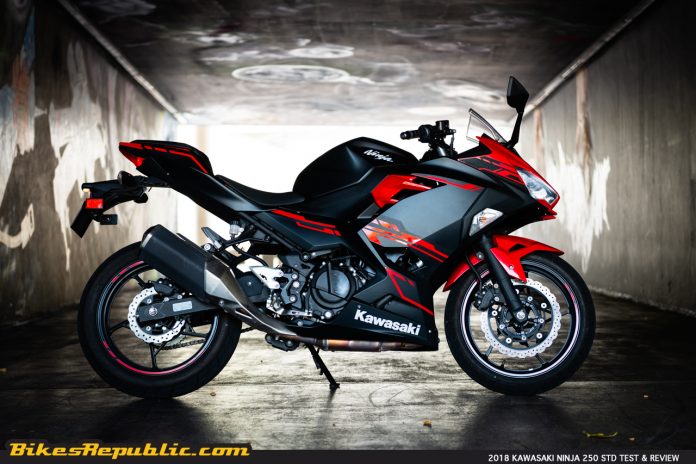 Testing the 2018 Kawasaki Ninja 250 kinda reminds me of having my favourite tomyam.

However, the first I’d do when it’s served is to locate and remove the cili padi (called “bird eye chili” in English, but that doesn’t sound good as a title, does it?). Then again, I’d sometimes miss a little flake and chewed it. Oh, the horrors! How could something so little cause so much “excitement”?

Kawasaki Motors Malaysia Sdn. Bhd. (KMMSB) launched the 2018 Ninja 250 at the Art of Speed 2018 in July and it’s since garnered lots of excitement.

Being used to bigger bikes, my initial inclination was, “Beautiful bike, but how fast can it go?” Okay, let’s come back to this later.

I’ve always referred to the 250cc segment as the “Game of Thrones” category. Being the most affordable higher capacity motorcycles after sub-200cc bikes, manufacturers fight tooth and nail for a piece of the pie. Yes, Kawasaki wants to dominate this sector, hence the 2018 Ninja 250 is new from the ground up. 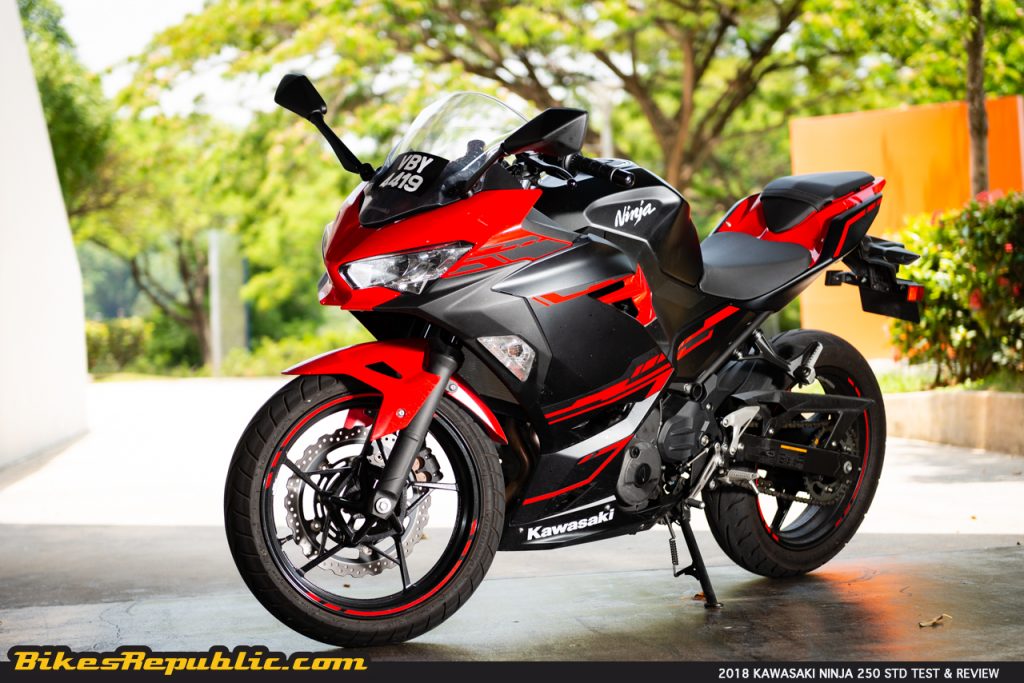 First, the design. Kawasaki are styling their bikes to reflect a family identity. As such, one could very well mistake the new bike for the ZX-6R or even ZX-10R at first glance. 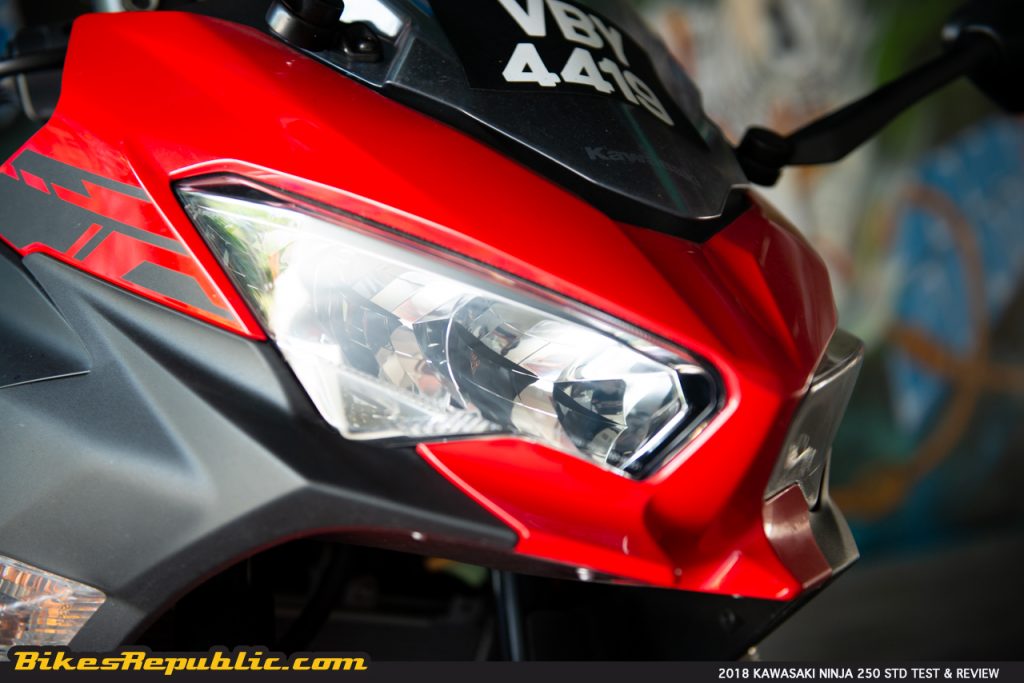 There are plenty of sharp angles at the front alone, especially on the “chin spoiler” below the headlamps alluding to more downforce at high speeds. The fairing flares outwards by the time it reaches the knee cutouts, making the bike look like a bigger capacity model. 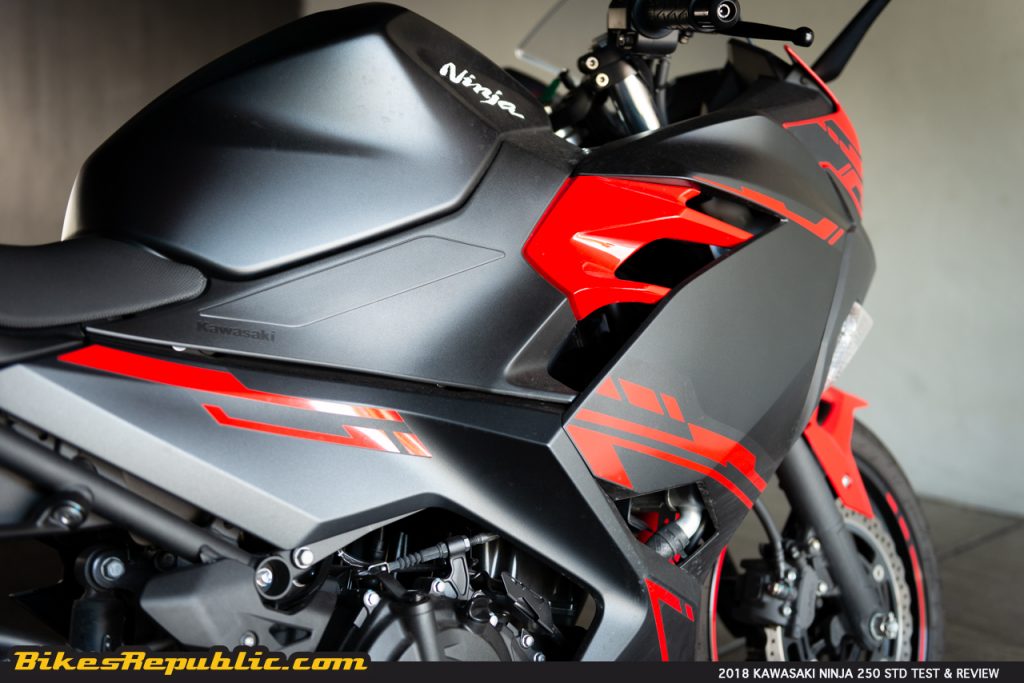 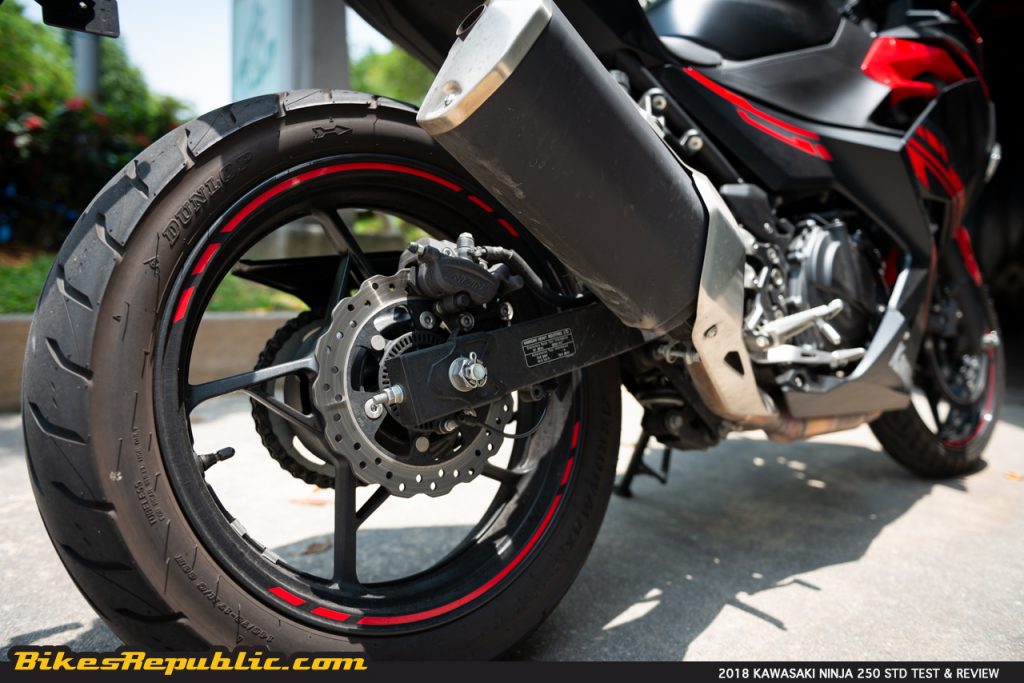 The seating position was sporty beyond doubt. The clip-on handlebars may look tall but it feels much lower when you’re seated on the bike; due to the compact fuel tank which puts you right up front. Such arrangement is good for mass centralization. The clip-ons are also angled downwards for a more comfortable riding position at high speeds. 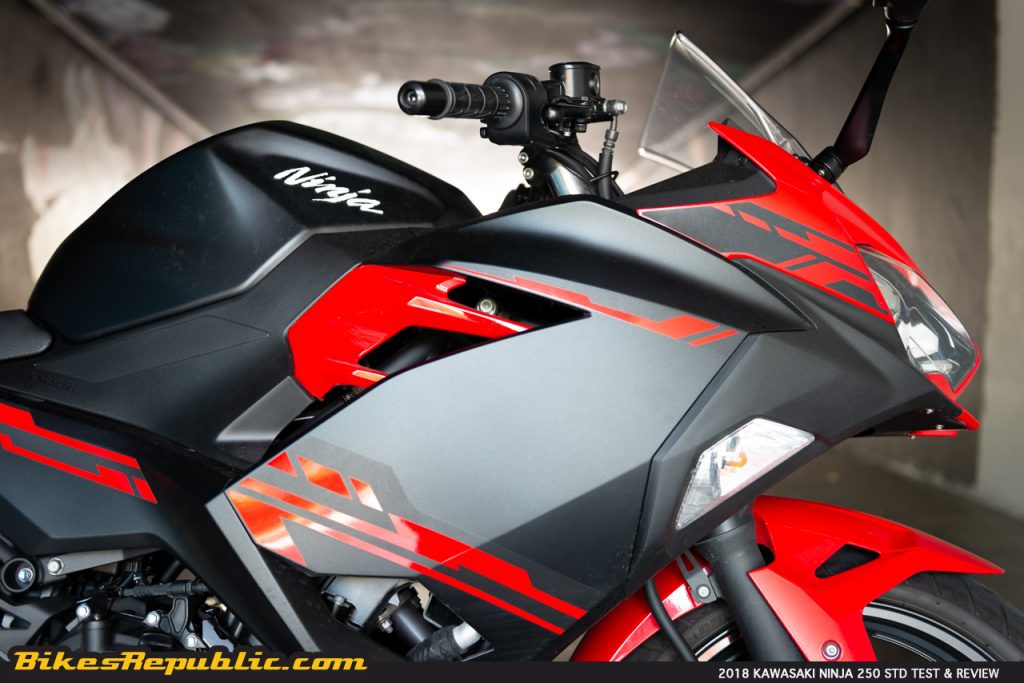 The new engine is much quieter when idling, too. Gone is the loud ticking from the valvetrain of its predecessor. Blipping the throttle sends the needle flying up the rev counter.

First gear in, added some throttle, clutch out and… CLACK! The engine cut out. Lucky for me no one was looking. You need to slip the clutch a little more to get going. 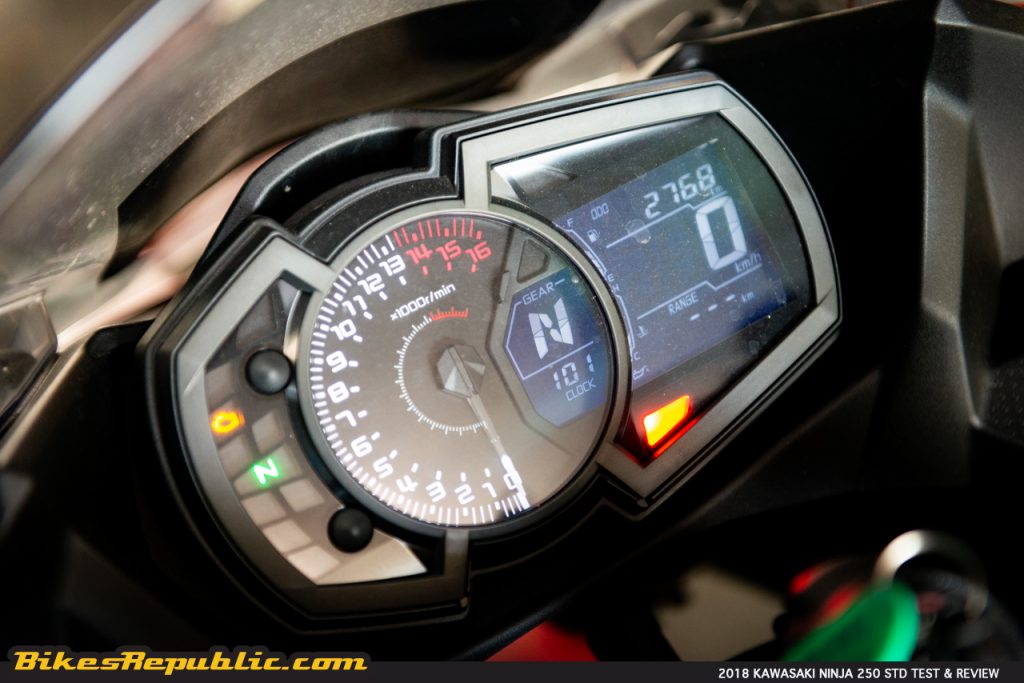 Acceleration was much, much smoother than I had anticipated. But the engine felt rather benign below 5000 RPM. More gas then. The rev counter’s needle swung up, up, up and the bike took off when it hit 8000 RPM. The exhaust note changed to a howl, accompanied by a guttural growl from the airbox underneath the tank.

Once, I let rip on the Ninja 250 to teach an MT-07 rider a lesson he won’t soon forget. Pinning the throttle, the “Little Red Chili” picked up speed surprisingly quickly for a 250, until we hit 179 km/h with 1000 RPM before the redline. Mr. MT never dared to re-approach. 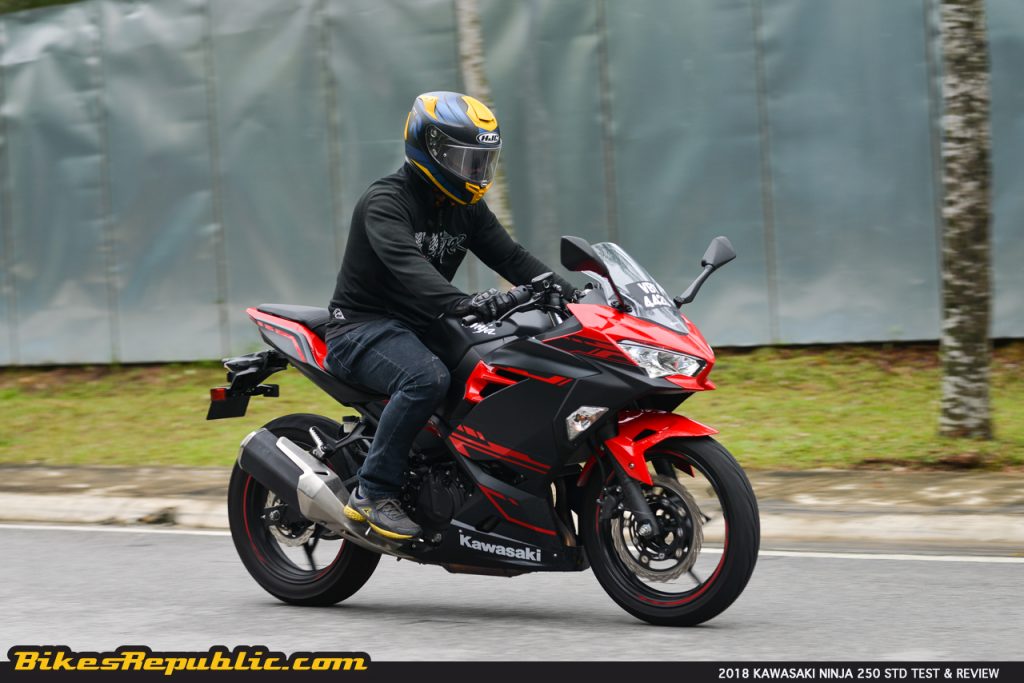 I related the experience to fellow journalists and one guy who’s smaller and lighter than I am recounted that he hit 192 km/h!

Of course, none of that speed would mean anything if the bike couldn’t handle. 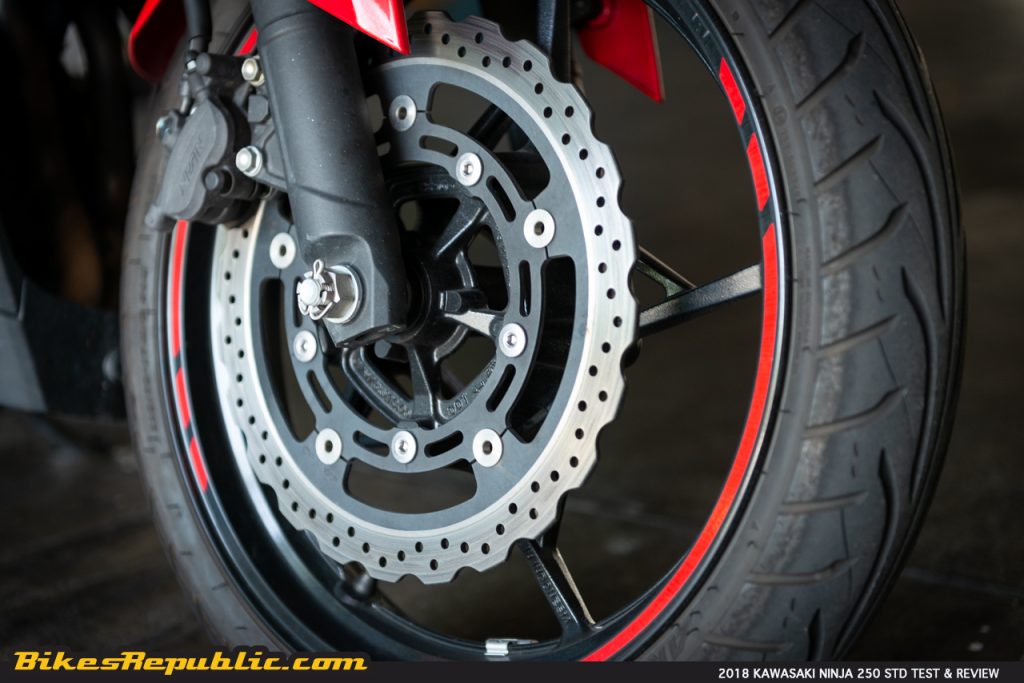 Steering was close to being effortless and you could swing the bike from side to side even while accelerating at full throttle. Yet, it was uncannily steady like a long wheelbase big bike in a straight line.

The suspension’s well-tuned for the war on corners. Here’s a tip: To maximize the Ninja 250’s corner speed, brake early followed by early brake release. 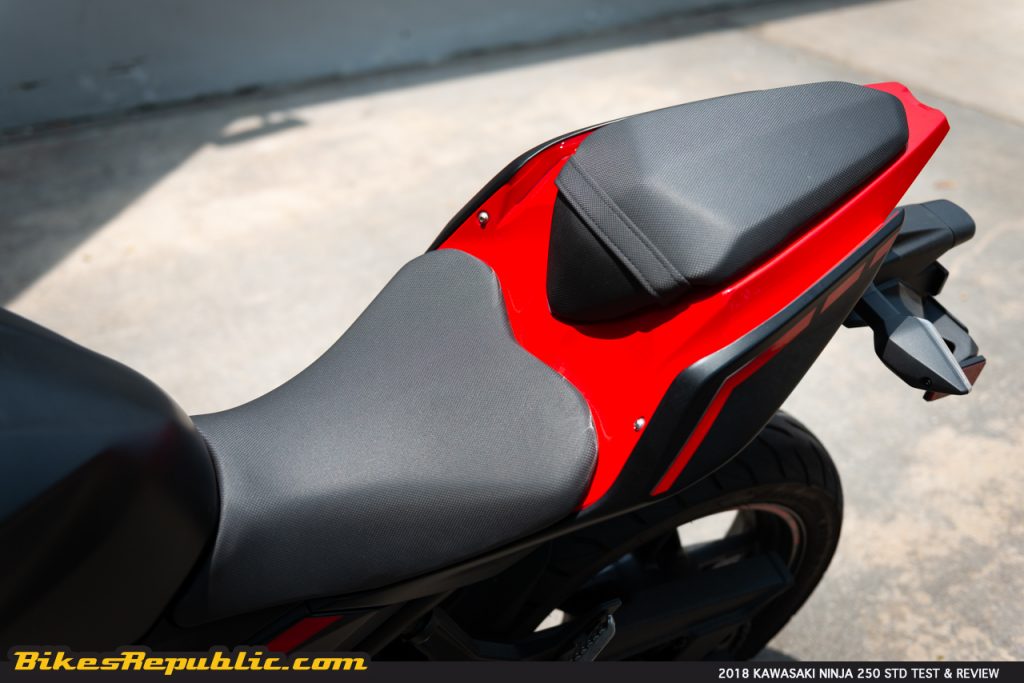 The slipper clutch’s nicely tuned to provide a degree of engine braking but it still allows the bike to freewheel into corners. Yes, like a two-stroke. Fun!

Riding a lightweight bike such as the Ninja 250 in traffic is a breeze as the bike changes directions quickly. The brakes are pretty strong, too. Another thing which I appreciated was the lack of hot air from the engine cooking certain organs. I do want another child, you know. 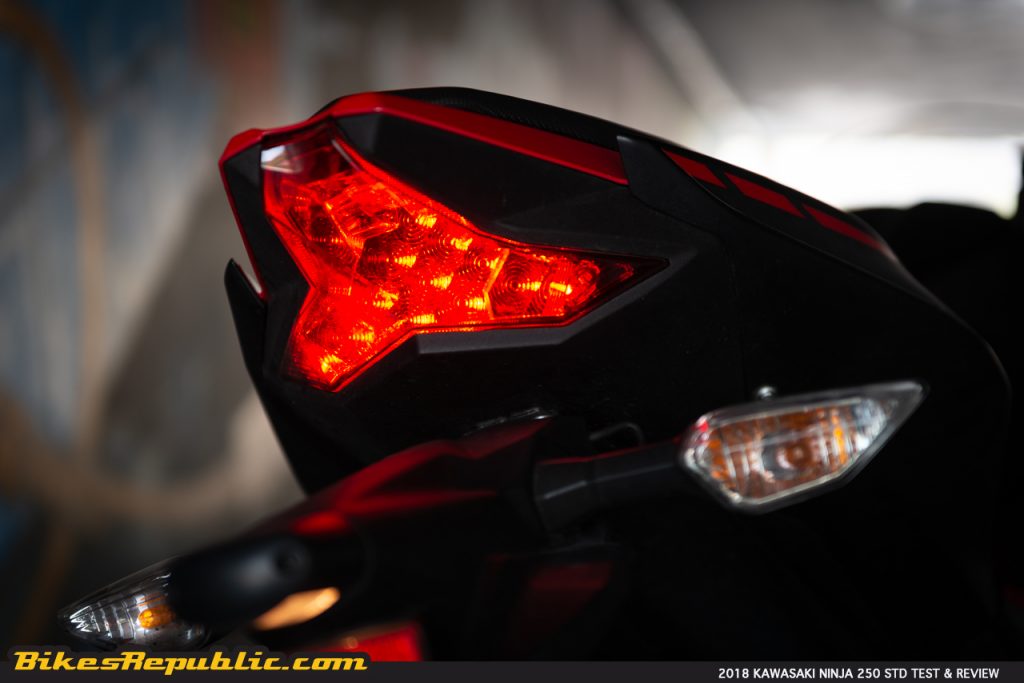 So, back to “Beautiful bike, but how fast can it go?” You see, the 2018 Kawasaki Ninja 250 isn’t about just top speed. Instead, Kawasaki has done a great job in reinventing the sporting 250 by infusing awesome handling and speed seamlessly, and wrapped in a beautiful bodywork.

And yes, small things can cause great excitement, just like the “Little Red Chili” here. 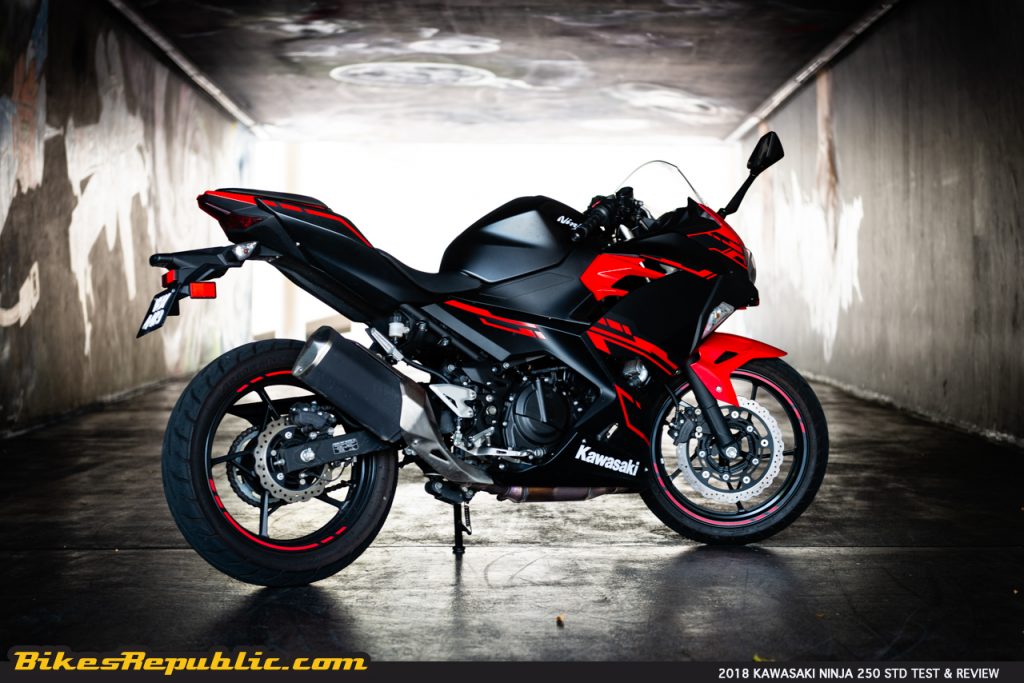