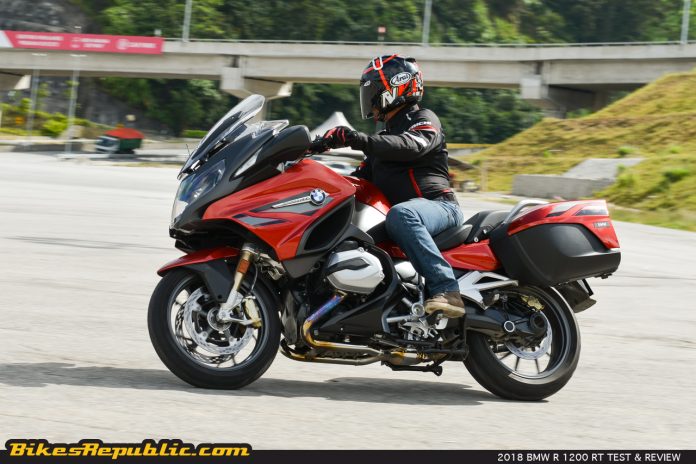 The BMW RT (Reise-Tourer or travel tourer) has had a long history, starting from the first R 100 RT in 1978 to this latest 2018 R 1200 RT. So, yes, it’s the RT’s 40th anniversary this year. By the way, the R 100 RT was the touring variant of the first fully-faired production motorcycle, the R 100 RS, which singlehandedly launched the sport-touring segment.

Please click on the link below to know more.

The current lineage of the R 1200 RT, however, began in 2014 with the introduction of the wasser-head (liquid-cooled) Boxer; and instead of just stuffing the new engine into an old bike, BMW redesigned the RT wholesale (side-by-side with the new R 1200 GS). New seats, seating position, fairing, instrumentation, and frame were fitted or updated.

It was also at this time when BMW added options such as Dynamic ESA (Electronic Suspension Adjustment), Shift Assist Pro (for both up- and downshifts), central locking system for the luggage and storage compartments, low and high seats cruise control, and keyless ignition (from 2015). 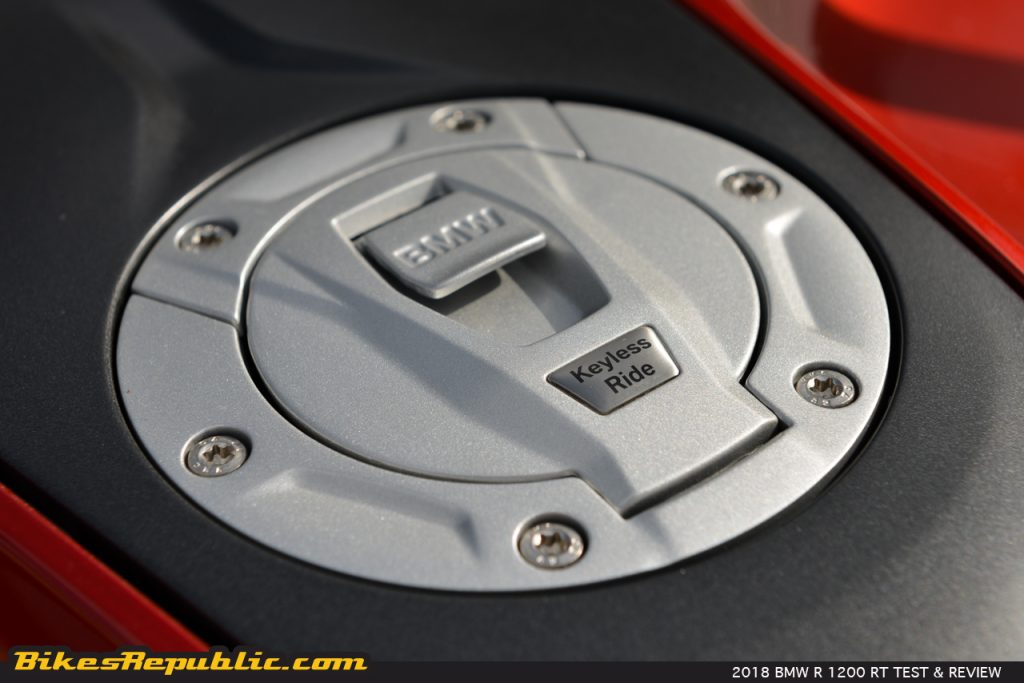 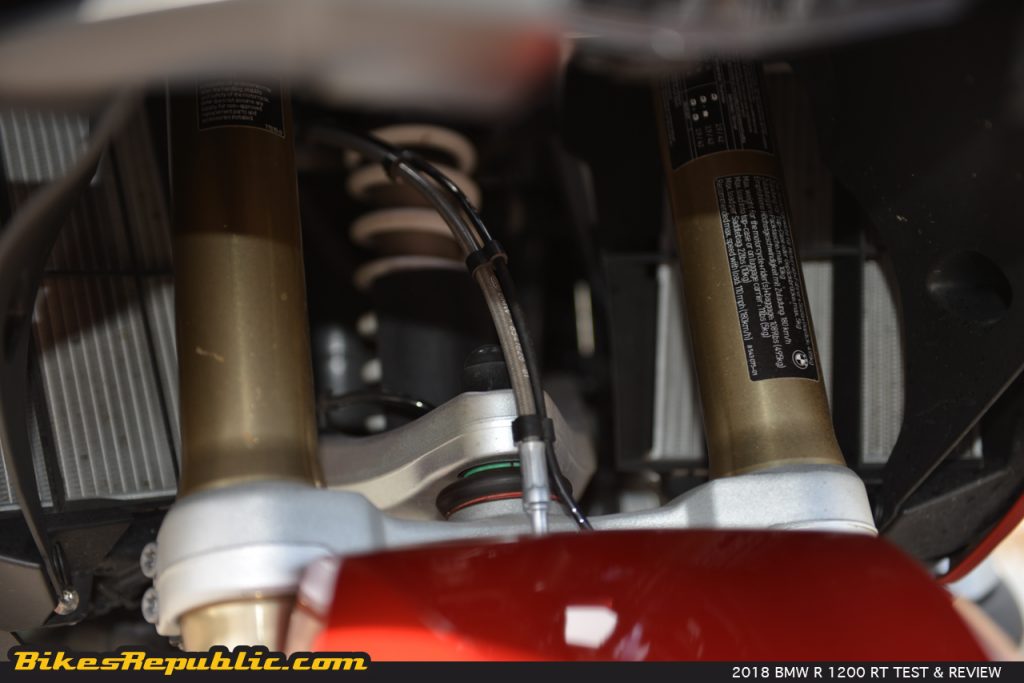 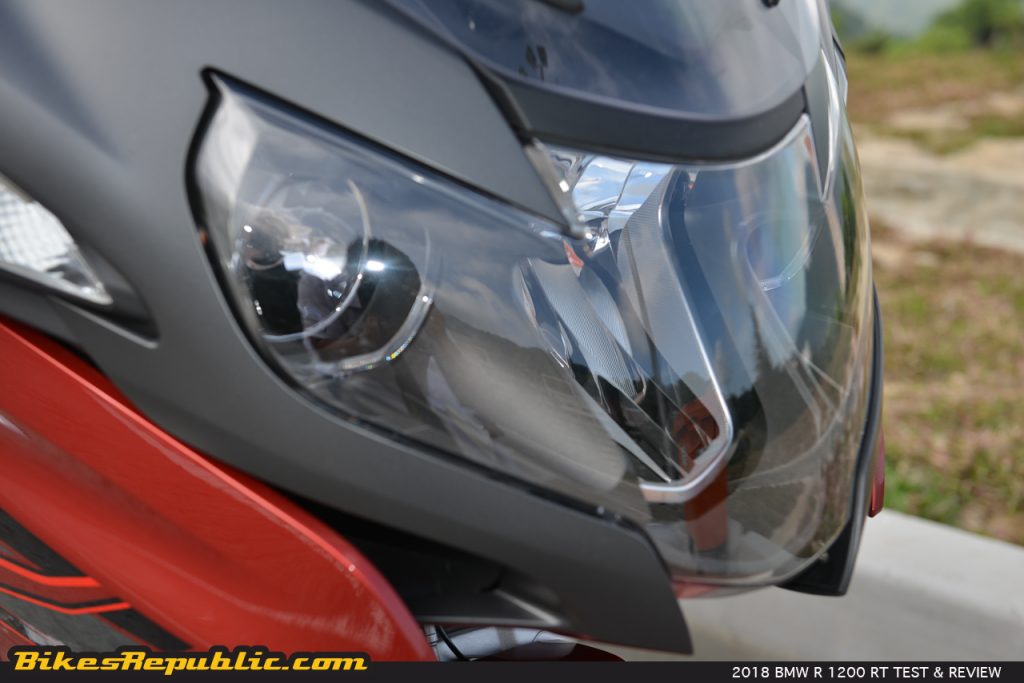 Styling wise, there’s no mistaking the R 1200 RT for any other motorcycle. The large front section carries the large headlamp cluster which consists of the central low-beam flanked by a pair of massive high-beam projectors; who are themselves ringed by BMW’s signature LED halo-rings. 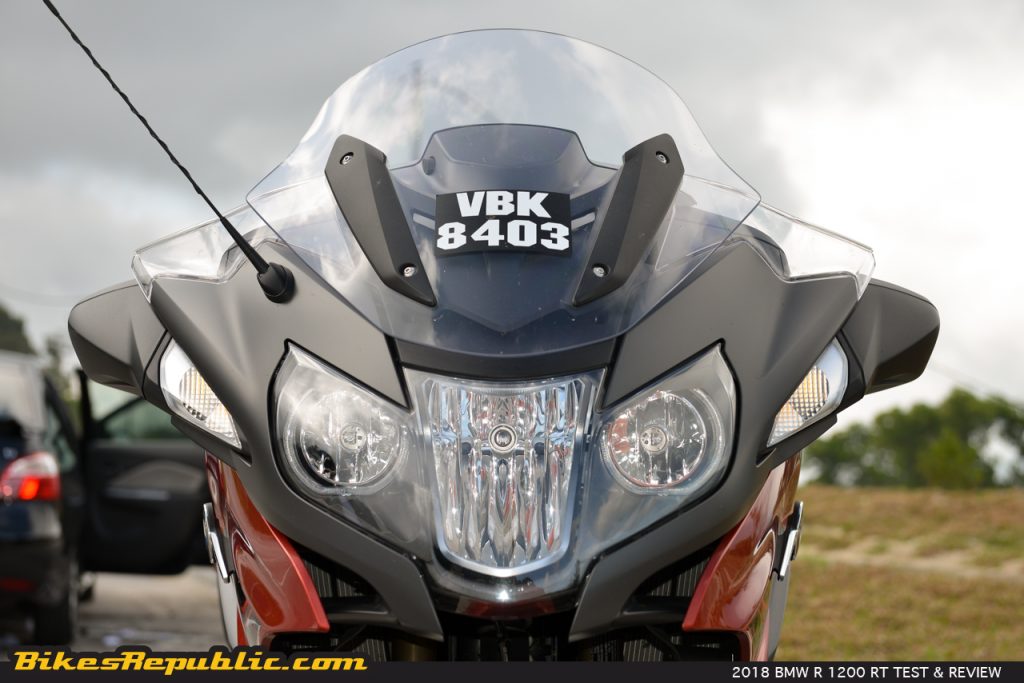 The rest of the body panels are sharp and consist of “panels” to deflect around the occupants. BMW routes the hot air from the split radiators through cleverly designed holes on each side away from the rider. Other smaller bodywork panels hide the rear parts of the engine and rear shock.

The handlebars are fixed in just the right position as you reach out for them. This is where the fun starts. 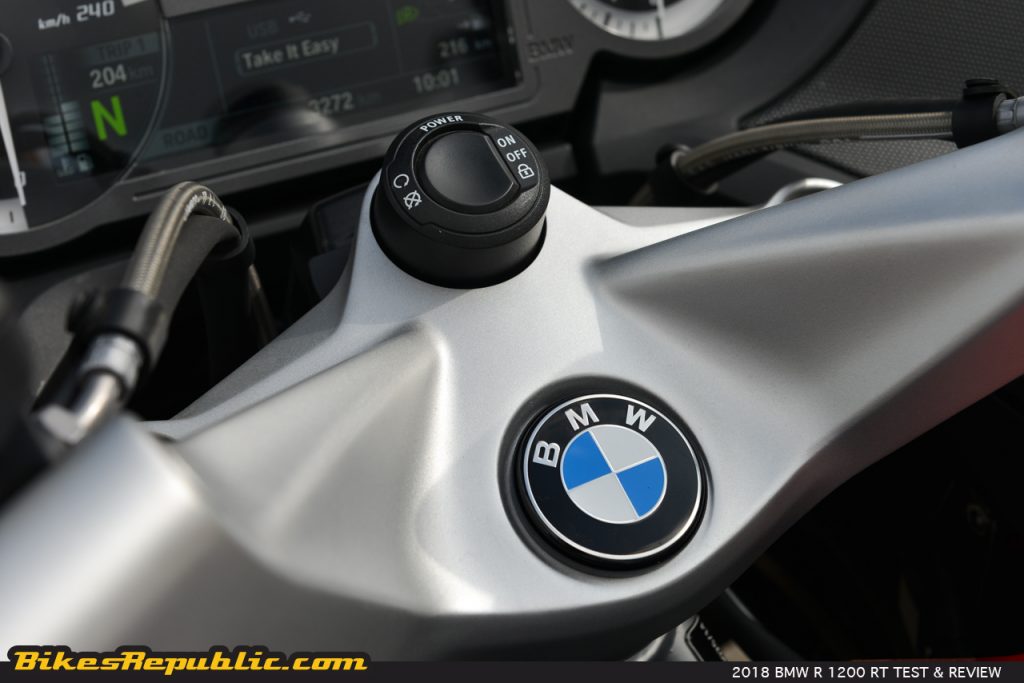 The 1170cc flat-twin fired up with that signature Boxer vroom and settled down to a drone with just a touch of vibration to let you know it’s alive. Give a blip and the Boxer vrooms, accompanied by a slight twitch to the right. 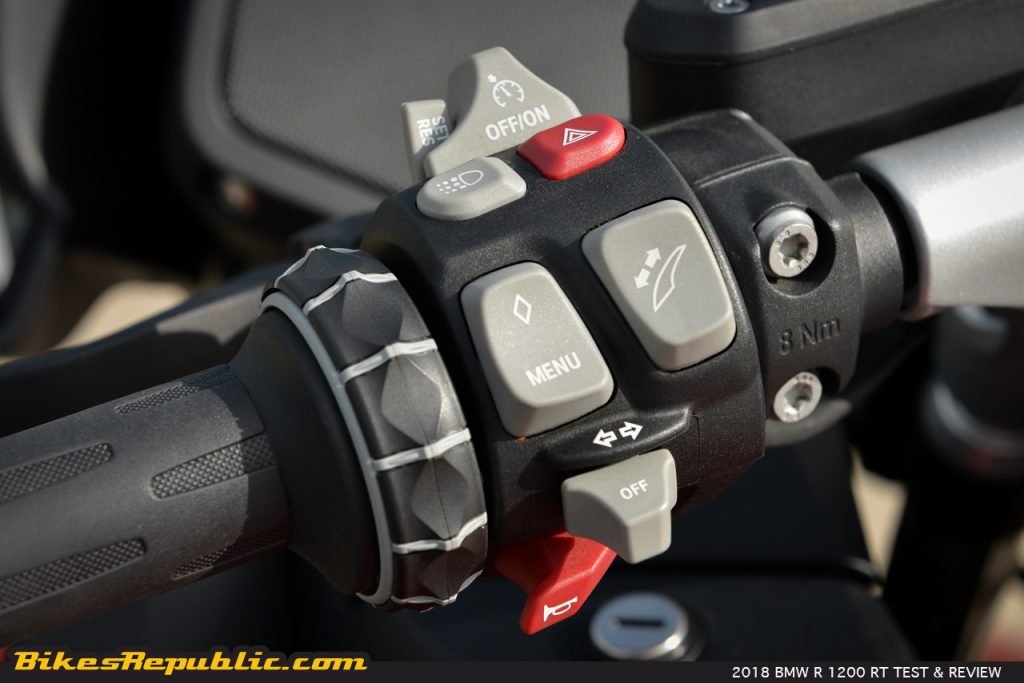 For a peace of mind, I pressed the remote storage locking switch to lock the panniers and the storage compartments in front of the handlebars, regardless if I had left the panniers’ unlocked. An audible mechanical whirr and a symbol of a key on suitcase lit up in the instrument panel as confirmation. This is brilliant as in case you forgot to lock the storage. 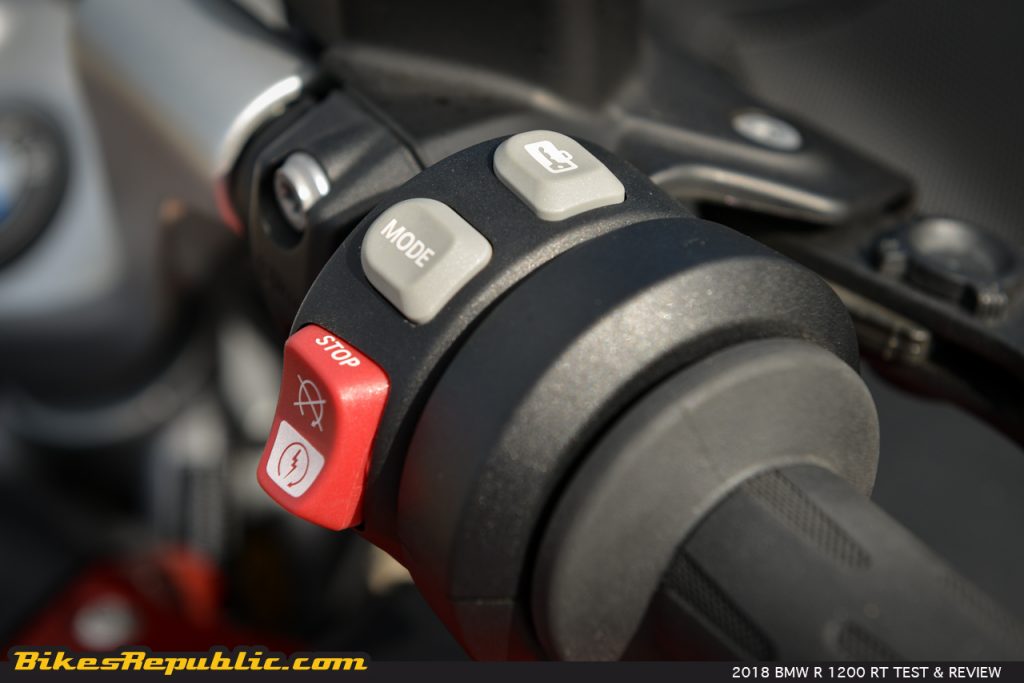 First gear still engaged with the familiar clack. Slip out the light clutch lever and you’re under way on a stream of smooth, smooth torque. The bike pushed forward quickly but very, very smoothly and the new shifter mechanisms worked as the gearshift was light, smooth and noiseless. Coupled with the aerodynamics, you wouldn’t notice the acceleration until you glance down to find yourself riding at 130 km/h or beyond. 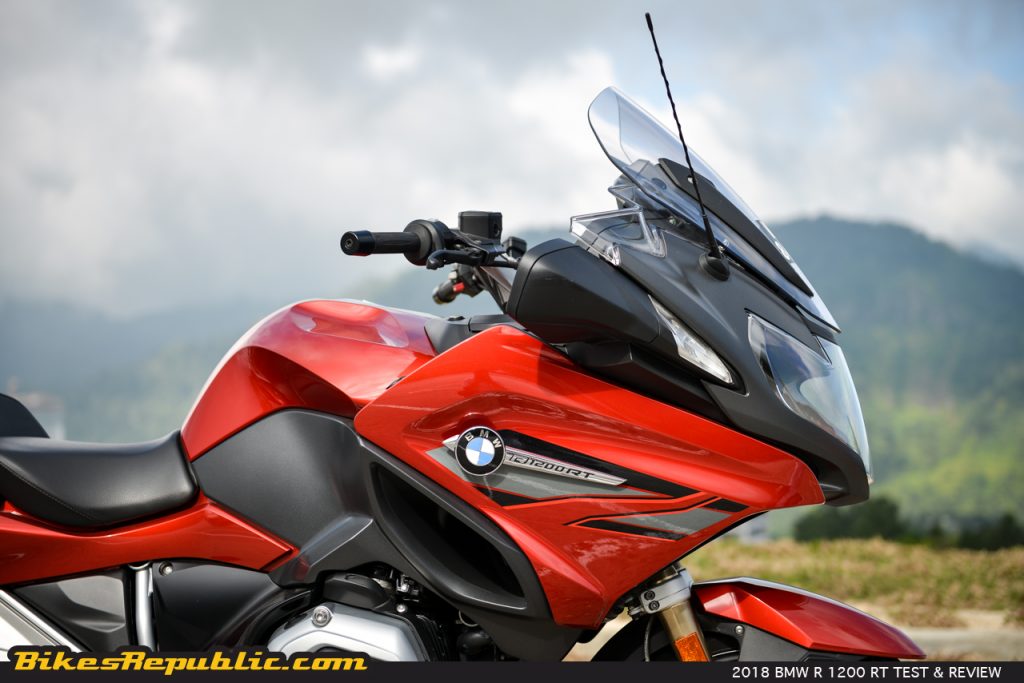 I was apprehensive at first when I approached cars on either side at the traffic lights, but I soon learned that there’s ample space to fit the wide front end through; and once the “head” got clear, the rest of the bike followed through. Plus, the RT has such an imposing presence that almost any vehicle gave space. Otherwise, I’d follow the vehicle for a short distance and use the engine’s torque to pass when the opportunity presented itself.

I’ve got a great sound system to listen to and plenty of settings to entertain myself with. Additionally, everyone stared at me in admiration (read: awe), especially when the design looks this good and painted in this new Mars Red Metallic and Slate Metallic Matte scheme. They scanned the bike from the front to the rear, up and down and craned their necks to peek at the impressive instrument cluster. 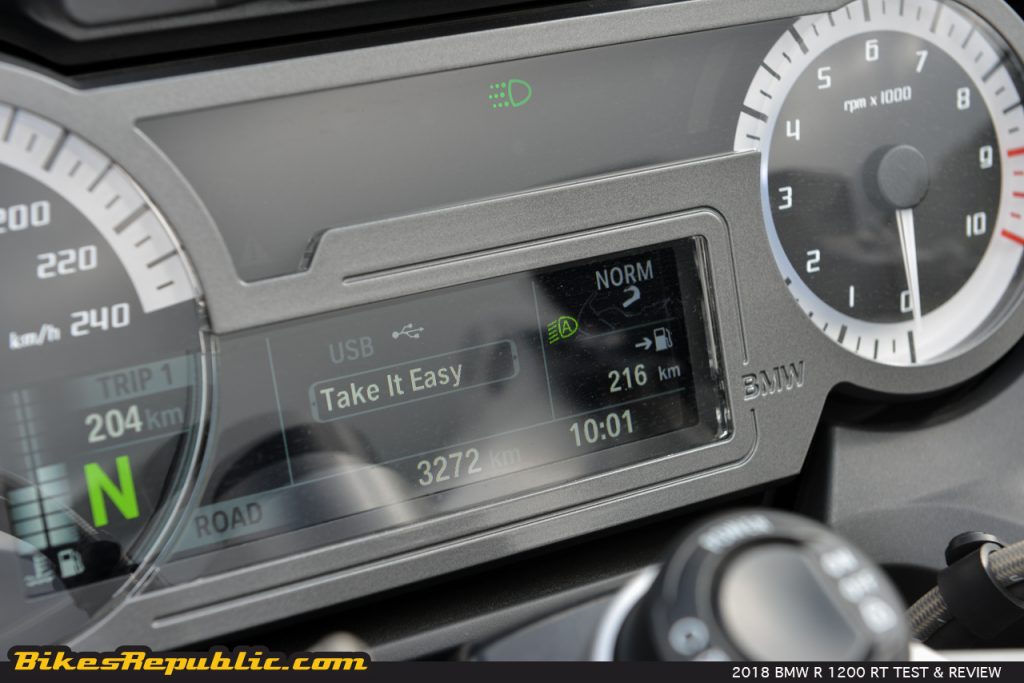 Again, when it’s time to get going, the R 1200 RT got going without delay. Vrooom, and you’ve pulled clear even in top gear. We’ve rode the bike to its top speed which was beyond ahem, 200 km/h while sitting straight up! No turbulence, not headshake, no weaving. Amazing. 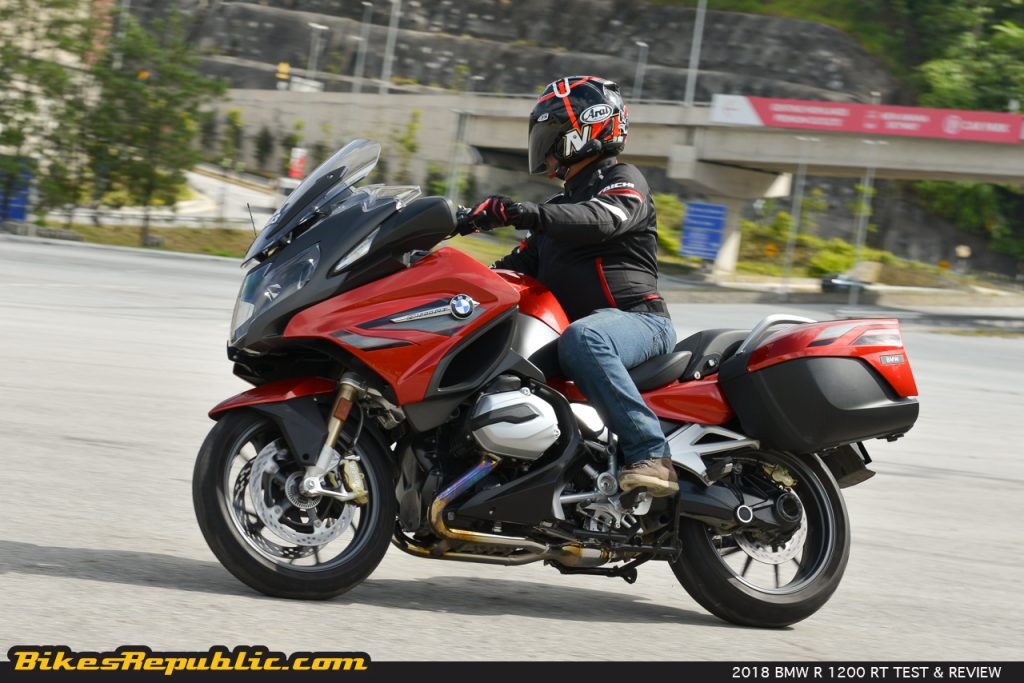 It was the handling which helped with urban riding. This is where the DNA of the R 1200 GS and R 1200 R shone through. The bike was light on its feet without feeling nervous, so you could confidently flick it around as you shoot into spaces in traffic, relying on the engine’s torque for a quick boost and the superb brakes to slow you down. The front brakes are linked to the rear’s ad the bike entire bike squats down when you clamp down hard on them, eliminating crazy wiggles and wobbles. 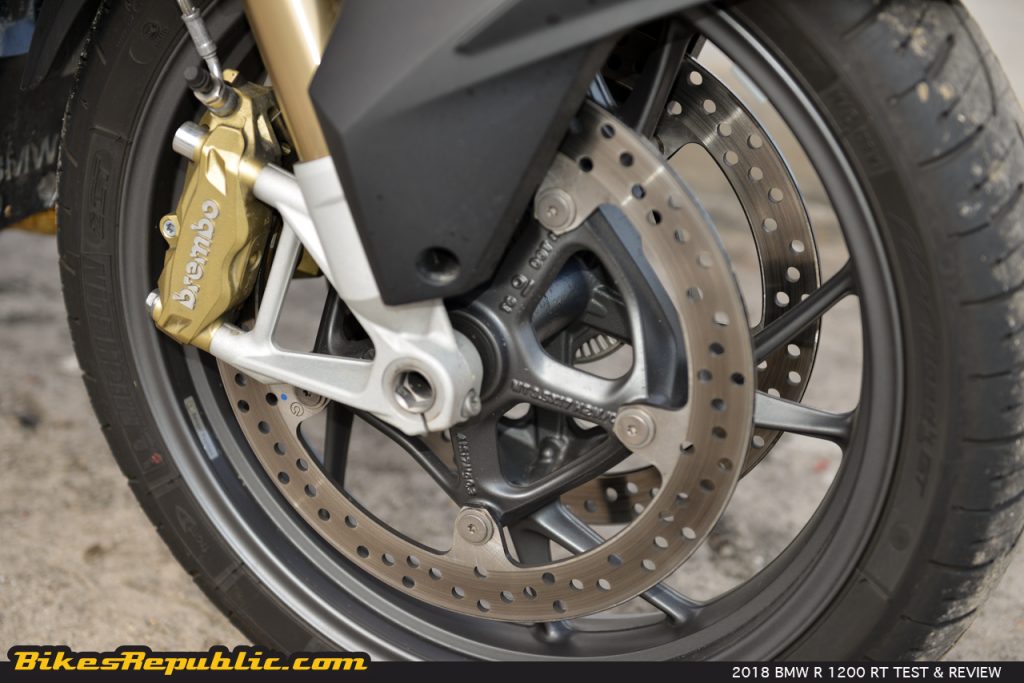 A soft tap on the handlebar was enough to change the bike’s direction, despite the “touring” 26.4o rake, 116 mm trail, 1485 mm wheelbase and 276 kg wet weight. It almost made no sense how well the R 1200 RT handled given its spec sheet figures. In fact, it was very much like riding a scooter. Make that a much better handling and braking, and stable scooter. I’ve never felt tired even after riding through the morning and evening rush hour traffic along Jalan Tun Razak. 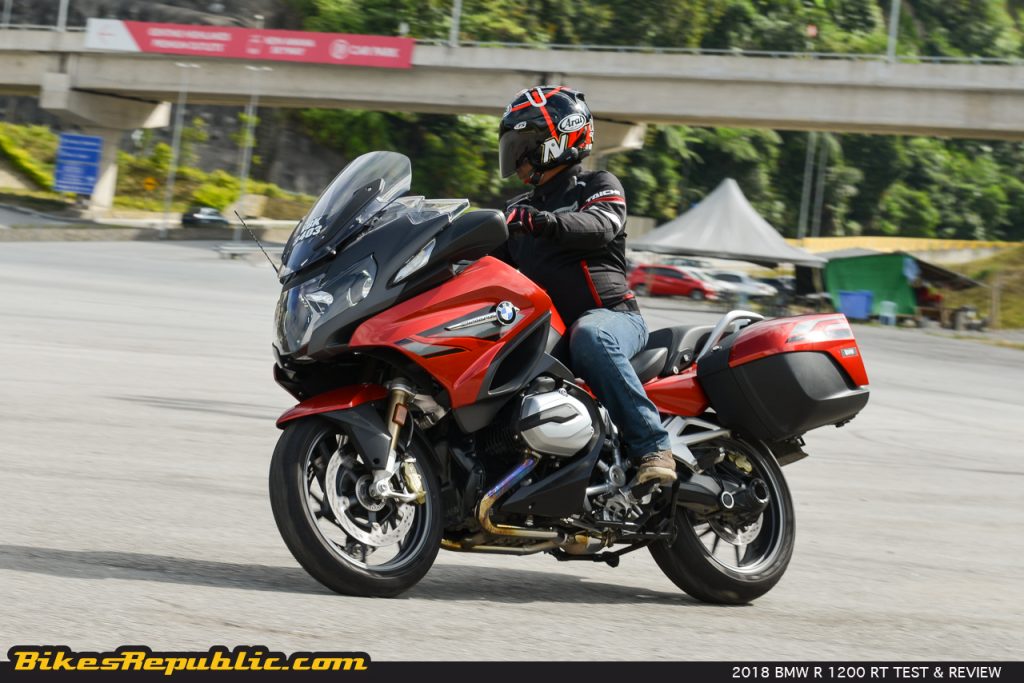 No wonder many law-enforcement agencies around the world use the BMW R 1200 RT!

But there’s no mistaking the RT’s natural habitat. Out on Karak Highway, apart from the feedback in your hands and bum, you might as well think you’re riding in a BMW 7-Series. Sure, the Dynamic ESA returned hard kicks when hitting sharp bumps, but it performed well nonetheless. It gives you more time to admire the countryside as you ride relaxed – even at high speeds. 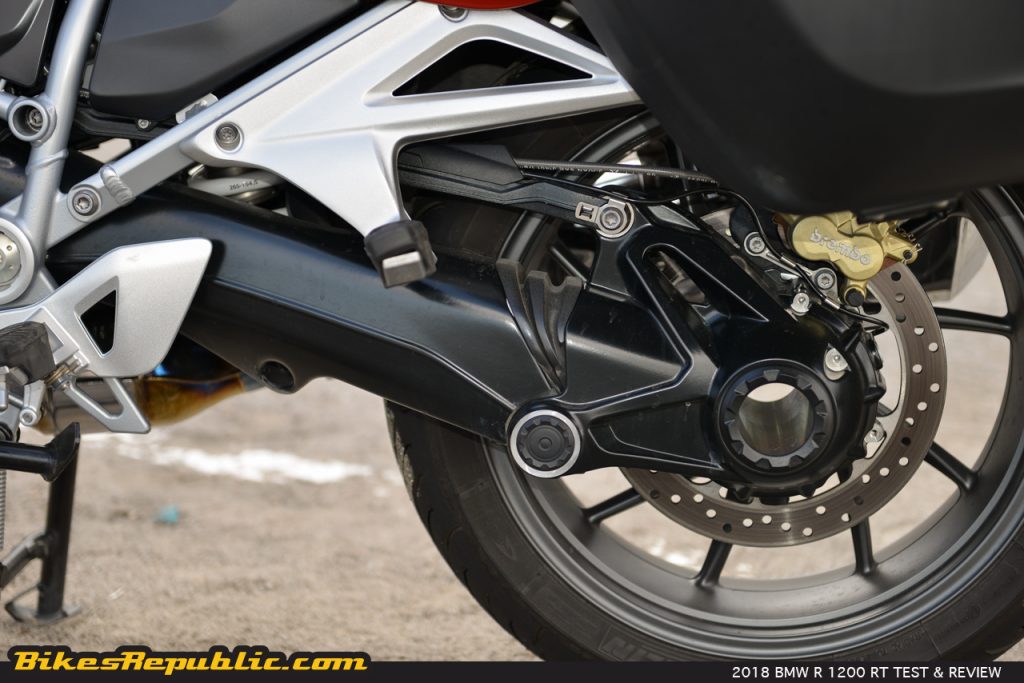 It wasn’t just about going straight either, for the RT could turn and burn, too. Of course, not as fast as a sportbike, but I could surely hang with most sport-tourers. The only way you could get it totally wrong is to bottle it up and panic. Have confidence in the front-end and you’d be rewarded with peg-scratching cornering everytime. 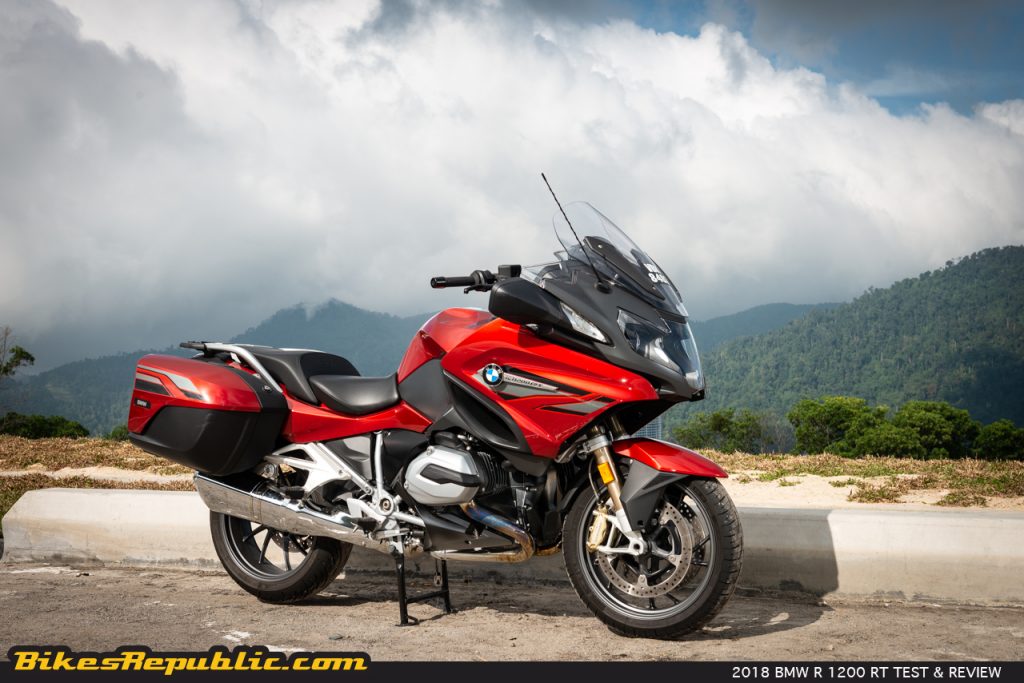 The R 1200 RT also performed remarkably well up Genting Highlands. The test bike was fitted with Michelin Pilot Road 4 GT sport-touring tyres and they gripped even over wet roads and loose dirt. A late-night ride up demonstrated the high-beam headlamps’ power in cutting a swath of light through the fog.

What’s a touring bike if it can’t carry luggage, right? Worry not. Those panniers could accommodate a full-faced helmet or a 15-inch Macbook Pro in a backpack each, while still leaving lots of room for everything else. Install BMW’s 49-litre top case and you could ride anywhere. 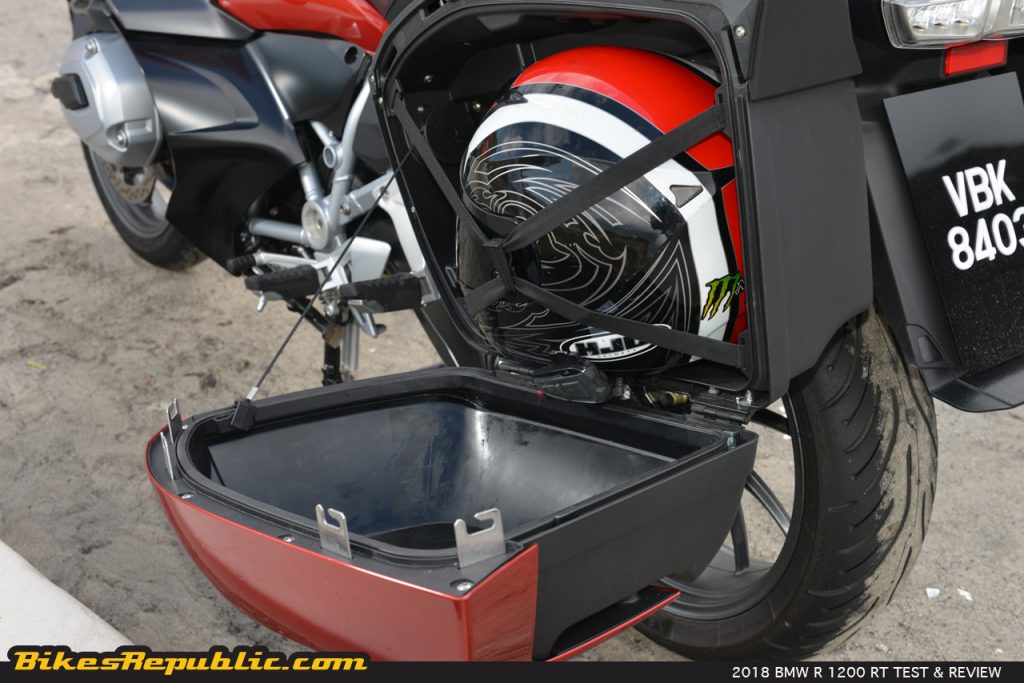 Lastly, a 25-litre tank could go as far as 500 km if you ride smoothly. Combined consumption through city congestion and spirited highway blasting lowered it into the lower 400’s. Still a good feat for a big motorcycle. 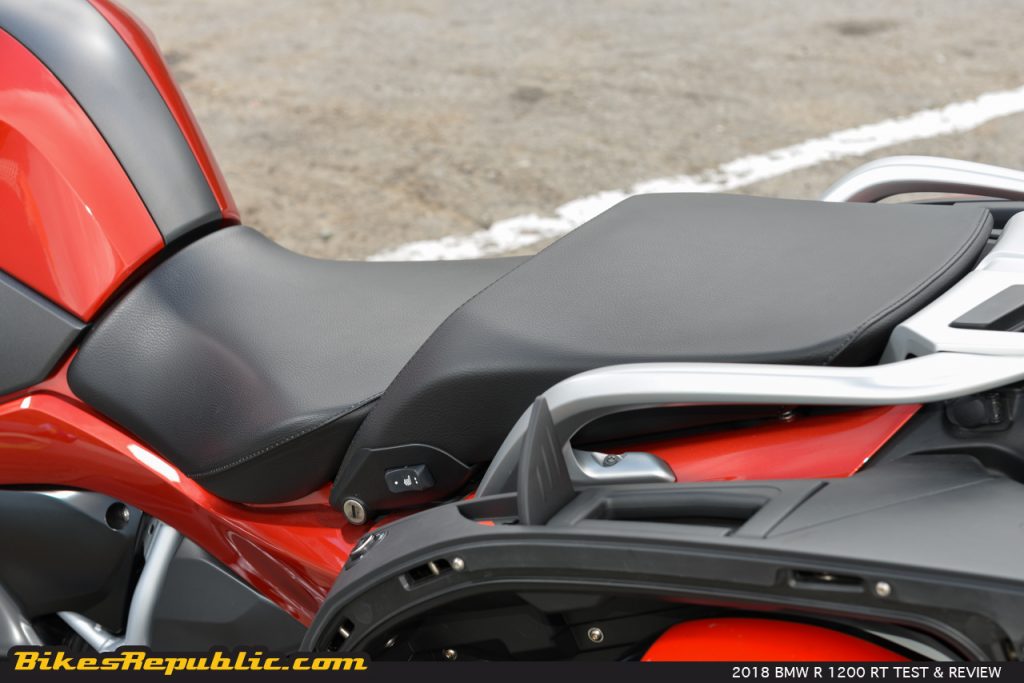 In conclusion, the BMW R 1200 RT is the luxury touring model which slots in between the sportier S 1000 XR sport-tourer and the K 1600 series full-dress tourers. I wouldn’t call it a compromise between the two extremes; rather, the RT has its own distinctive character as a long-distance runner which endears itself to you very quickly with its great comfort, performance, great looks, typical BMW quality and fuel economy.

Priced from RM 118,798.77 (with 0% GST), it is exactly cheap for a person such as me and am convinced beyond reasonable doubt that I would like to own one in a heartbeat if some kind soul decided to donate some money my way. 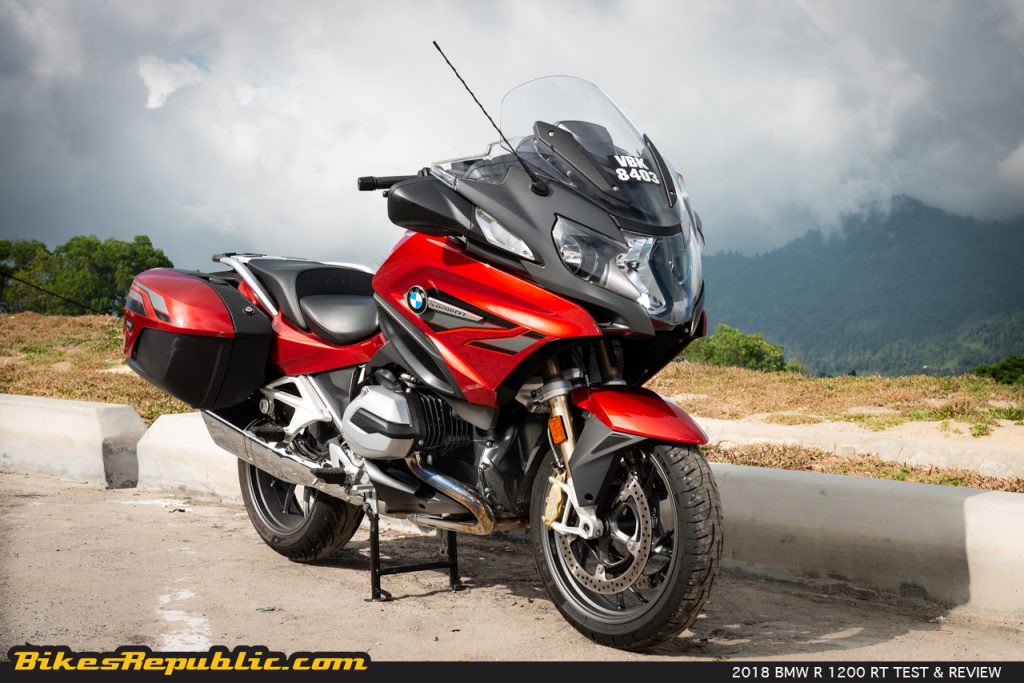