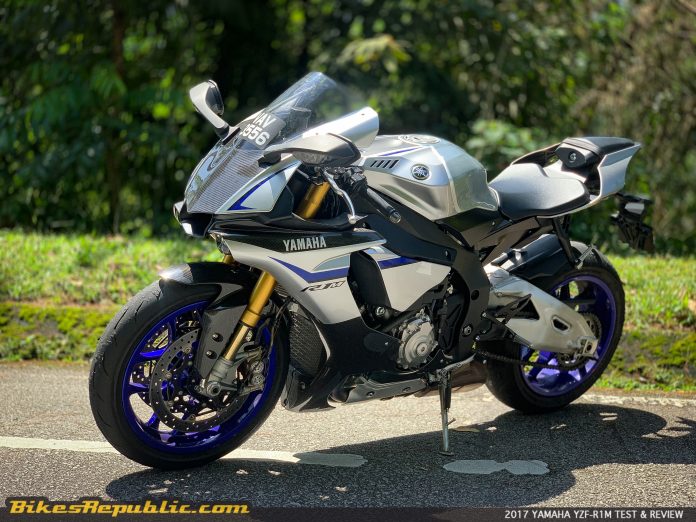 The Yamaha YZF-R1 or in this case the 2017 Yamaha YZF-R1M seems to hold a special place in the hearts of sportbike enthusiasts in Malaysia.

Many other superbikes have come along to take bites out of this models’ pie since its introduction in 2015. So, how does it hold up against the competition?

Introduction to the Yamaha YZF-R1M

This is the third generation R1 which debuted in 2015. There are two variants: The “regular” YZF-R1 and the higher spec’ed YZF-R1M in this test.

Its styling was generally well-received, but the front proved to be controversial back then. While it followed Rossi’s bike (large space for a number plate), the headlamp placing was initially panned. But it’s grown on us since then. 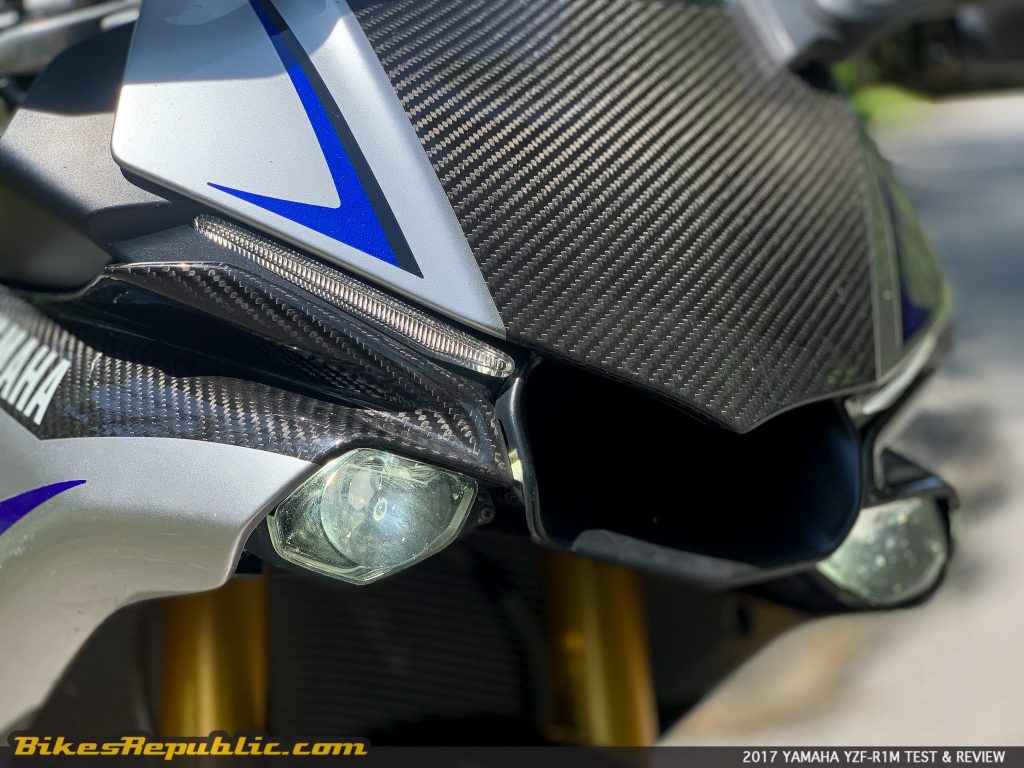 Looking at it now, the rest of the bike does look kind of old school. Yes, 4 years is too many in sportbike terms. While the newer bikes have more smooth panels, the R1M’s consists of many angles and pieces, making it look busy. Its silhouette is nice though: Aggressive and distinctive.

But the R1M was the first Japanese superbike to feature electronically controlled… well, everything. Engine power modes, engine back torque, traction control, suspension settings as well as the detailed controls are all accessed through the TFT screen’s menus. Sorry, I can’t find the control to make a caramel latte. 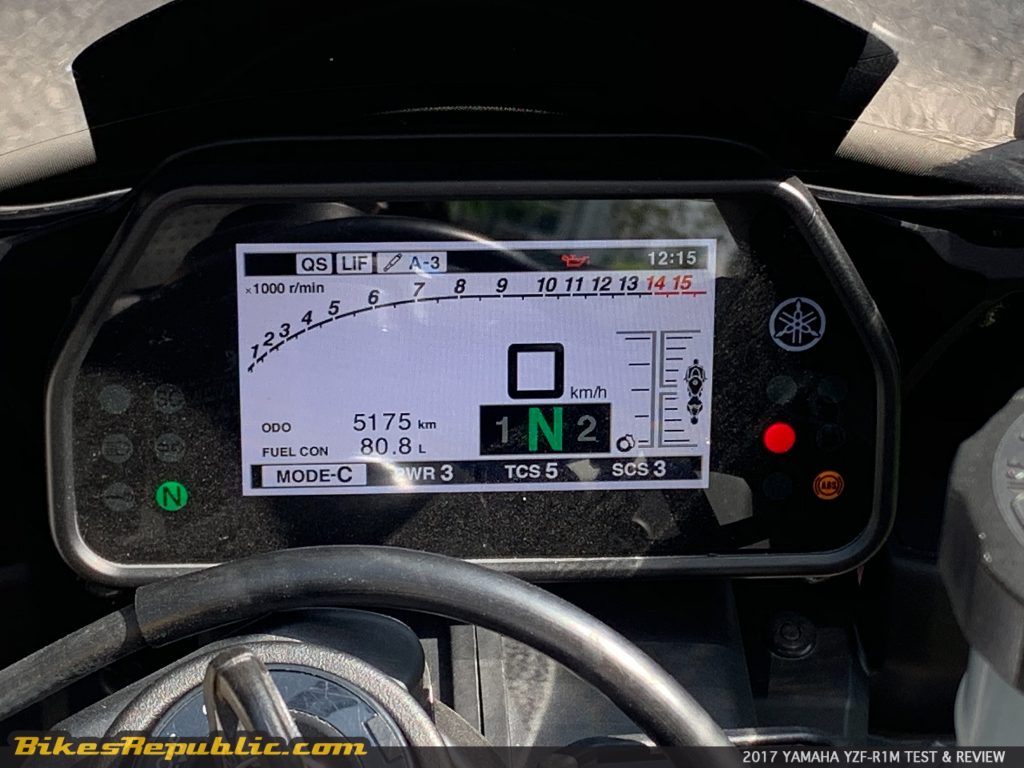 The engine fired up with an immense roar, as if it’s got an aftermarket exhaust. The engine also emitted loud sounds, but that’s probably attributed to the thin walled engine covers.

But before moving off, it’s time to go through the settings. There were 4 power levels (1 being the lowest), 4 TC levels (1 provides the most intervention), 2 quickshifter modes, 3 engine braking levels, 4 suspension modes. Choosing a power level also changes the settings (except suspension) by default. However, you could choose the power level to your liking while customing the other parameters to your liking. 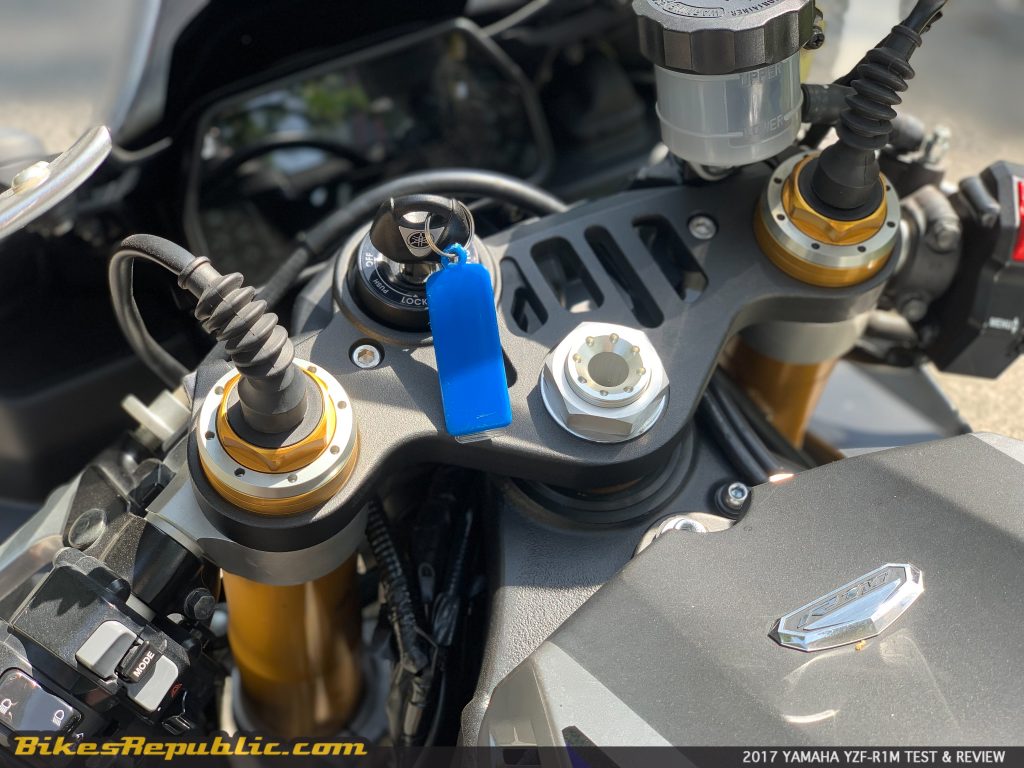 As for setting the Öhlins Electronic Racing Suspension, the first, marked A-1 (automatic-1) is the stiffest with the most damping, while A-4 is the softest. I chose A-4 for road riding.

Flip another page on the menu and you’ll find the suspension’s fine tuning. The best thing about the menu system is that it shows you where your starting point (after choosing the A level). If you reduce a parameter, the menu will show -1, up to -5, and vice versa. Awesome! This way, you don’t have to guess and go all bananas. 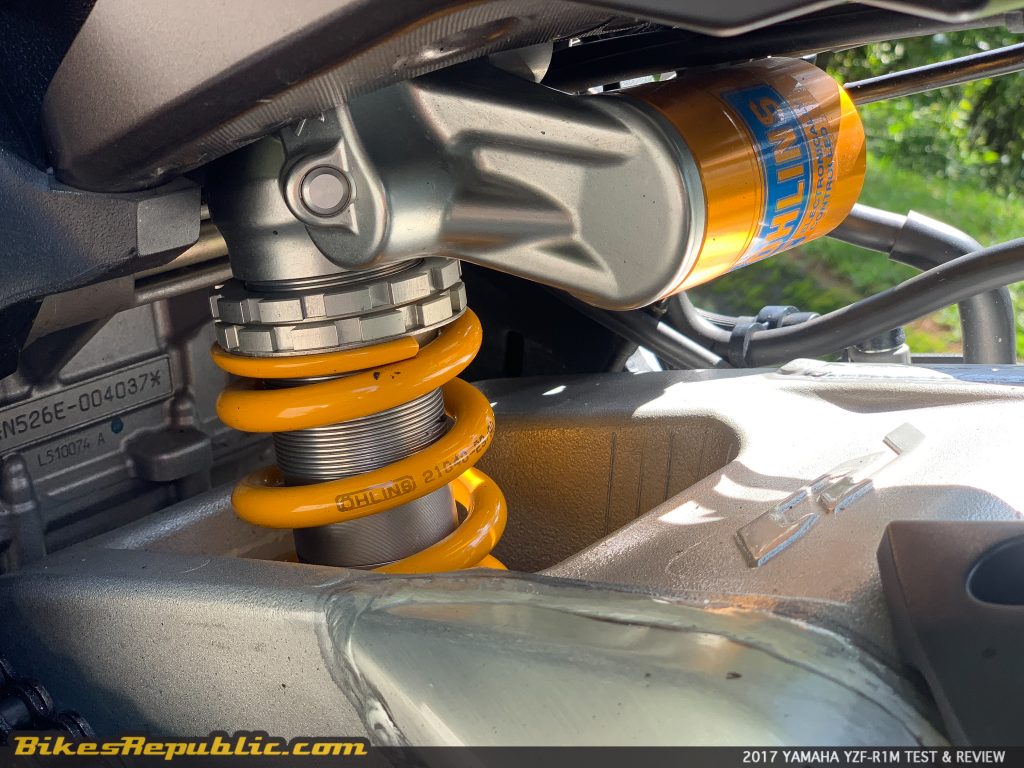 You can choose to set up the suspension manually and independent of the automatic settings too and save the settings in M-1, M-2 and M-3. There are 32 “click” to play with for each parameter just like those manual racing suspensions, but electronically.

Exiting the menus and back out the main screen, it shows all the pertinent data you’ll ever need. The top row shows your settings and you could change them on the fly. In ROAD mode, the screen displays speed in the middle. But if you switch to RACE mode, the speed display changes to a lap timer. Cool!

That’s 20 minutes gone just to set it up. Phew! 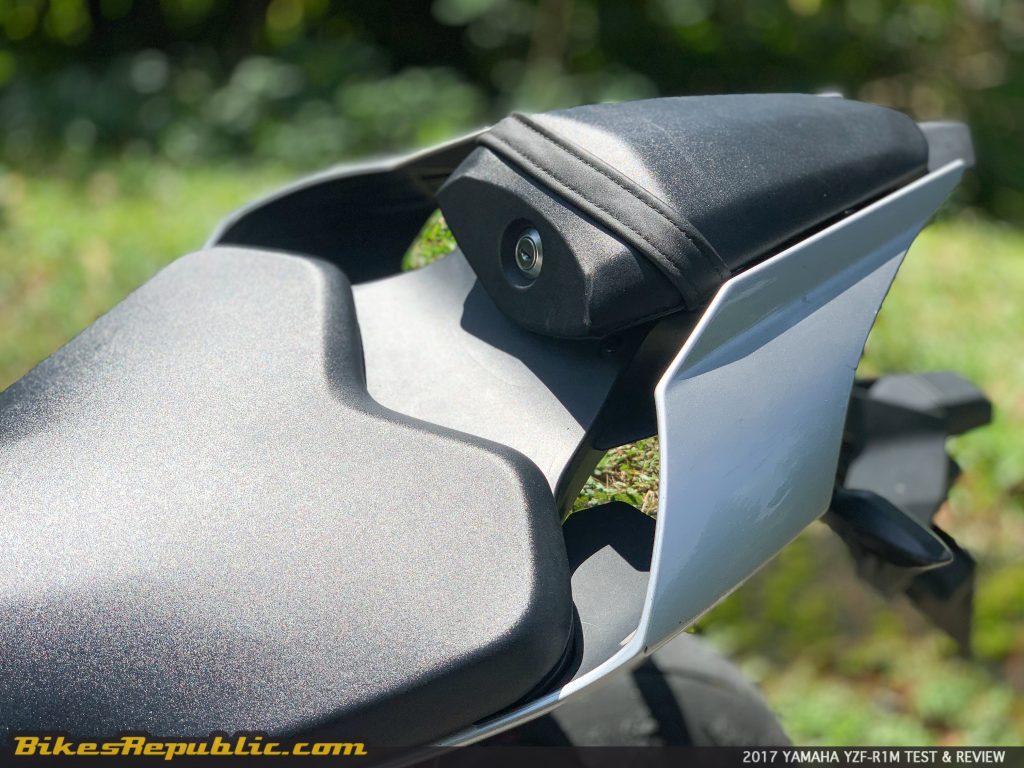 The seat was the tallest among all sportbikes even with the rear shock’s preload wound all the way out. The clip-ons were set low but reach to them was thankfully short, so you don’t look stretched out like roti canai dough.

I took a liking to the bike immediately.

Sat in the correct position (crotch about 2.5 cm/1 inch from the tank), the steering was light and didn’t feel like it needed herculean efforts to turn it. The fuel tank’s knee cut outs were right there where my knees were instead of being higher up. 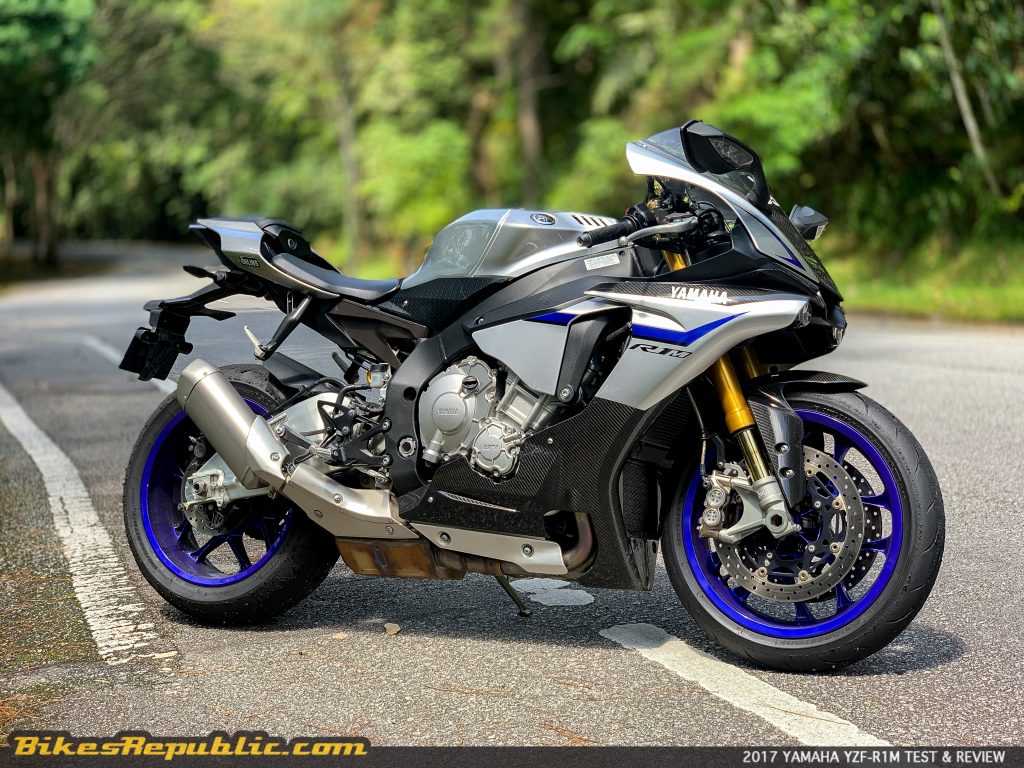 The first gear was very long so I’d usually short-shift into second. Give it a fistful of gas and the bike just took off with one of the most beautiful soundtracks. Low down, it sounded like a V-Four but once the tach swung past 8,000 RPM it produced the V-Four roar mixed with an inline-Four wail. It’s one distinctive warble that no other bike produces.

That torque was the loveliest thing on this bike. Whereas certain inline-Four superbikes took time to accelerate from down low, the YZF-R1M took off like a missile homed in on its target. And that was in the lowest power level! 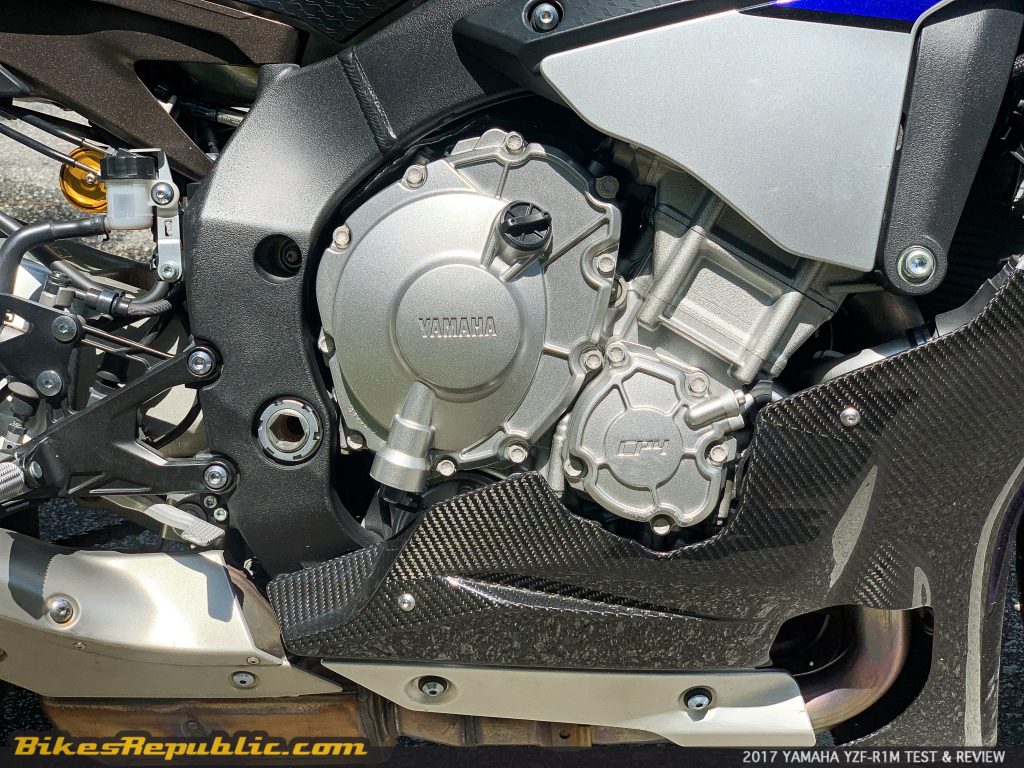 But even as speeds went well into triple digits, the bike stayed straight almost without a single weave. Most sportbikes will weave slightly since they were made to be super agile but the R1M stayed the course like it was on proverbial rails.

Yet, it was so easy to flick the bike over onto its side and making great use of the 200-section rear tyre. I credit that to the knee cutouts in the tank which enabled me to push my outside knee into it and help turn the bike. Additionally, the tank’s edges provided support for the forearms. 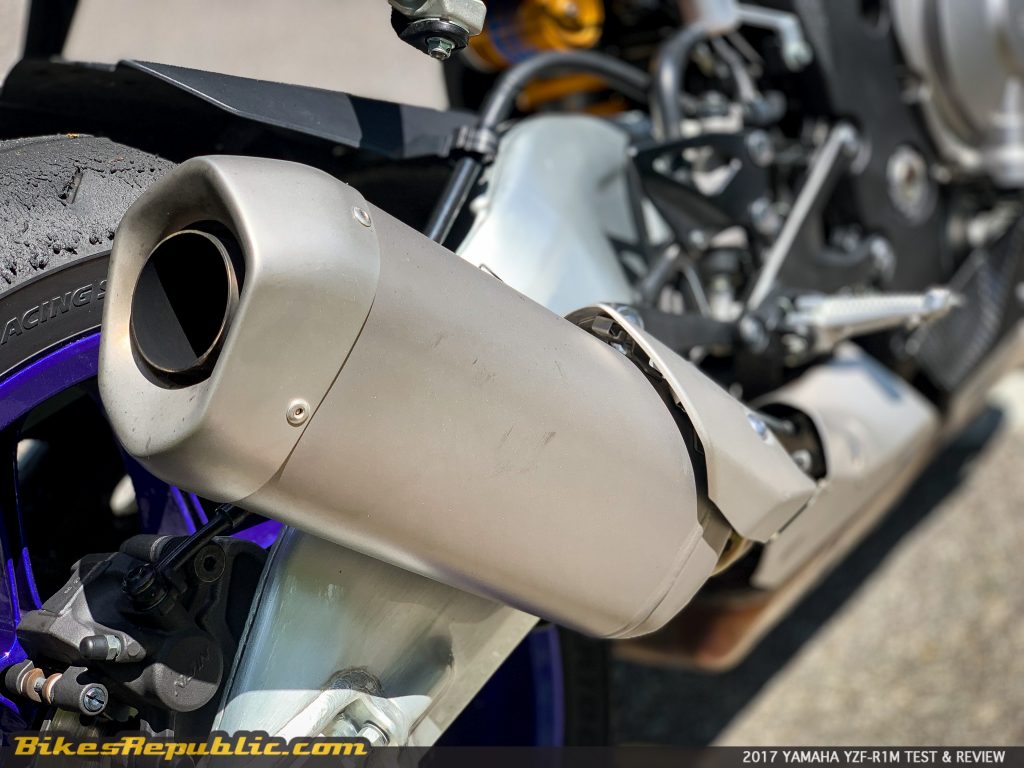 But again, the bike was super stable in midcorner. Choose your line, flick it in and throttle out. Done. It wasn’t only so in those long high-speed corners, for it exhibited the same kind of tenacity in slow corners going up Genting as well. Other bikes would push the front tyre in those slow hairpins but the R1M seems resolved to track through any corner.

This superb performance is credited to the Öhlins Electronic Racing Suspension. It But that’s only half of the story as the YZF-R1M was among the very first motorcycles to incorporate the 6-axis inertial measurement unit (IMU) technology. Data from the IMU is fed to the suspension’s control unit which monitors many parameters every few miliseconds and determines the best damping while braking, cornering and accelerating. 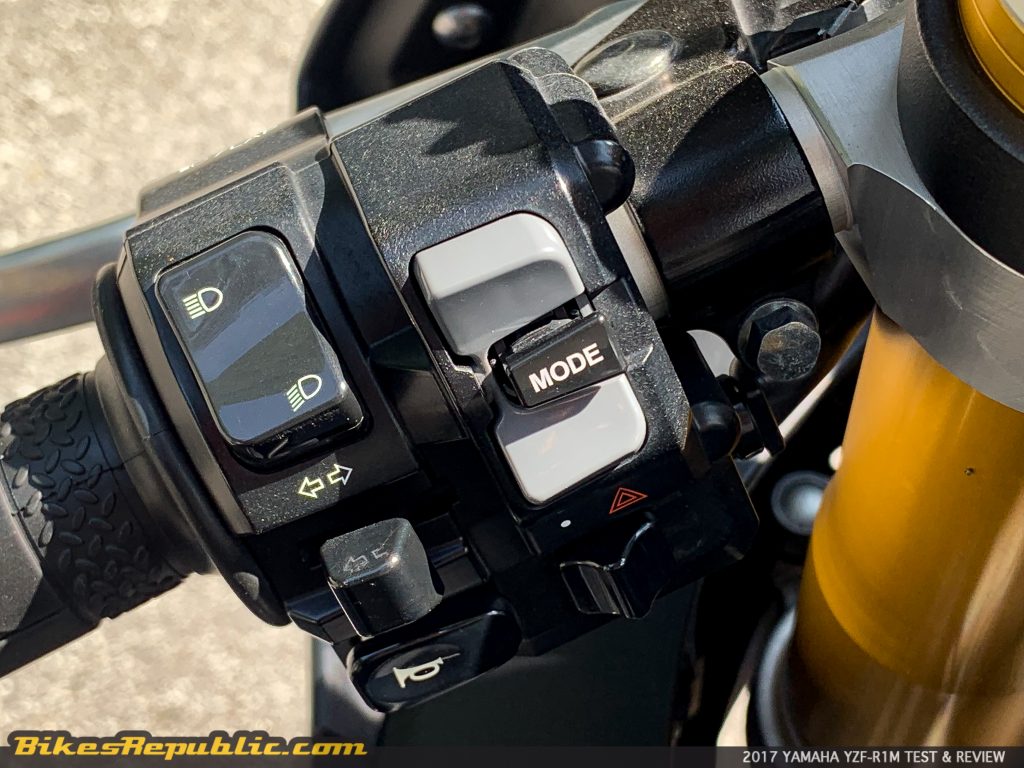 The tops of the tank’s knee cutouts were not far from the top my things and brace against them when I braked hard. They were absolutely perfect from my 167cm height, but I imagine those with long legs might find them a bit troublesome. 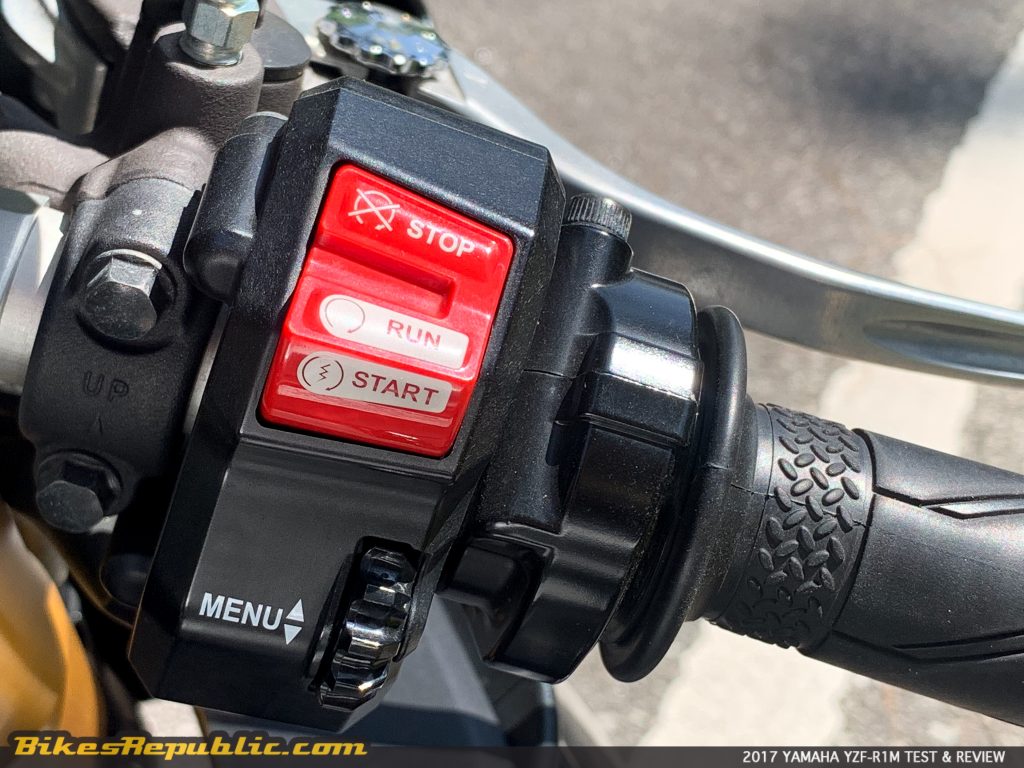 Speaking of braking, those calipers gripped like mad, despite not being the fangled Brembo. They’re not even monoblocs. I thought I was going to be thrown over the windshield the first time I clamped down with two fingers.

The Yamaha YZF-R1M certainly changed the superbike game when it came out and still remains a powerhouse. 197 hp at 13,500 RPM and 112.4 Nm of torque is nothing to sneeze at!

The 2020 Yamaha YZF-R1 and YZF-R1M have been launched recently and we could only guess at how much better it would be! 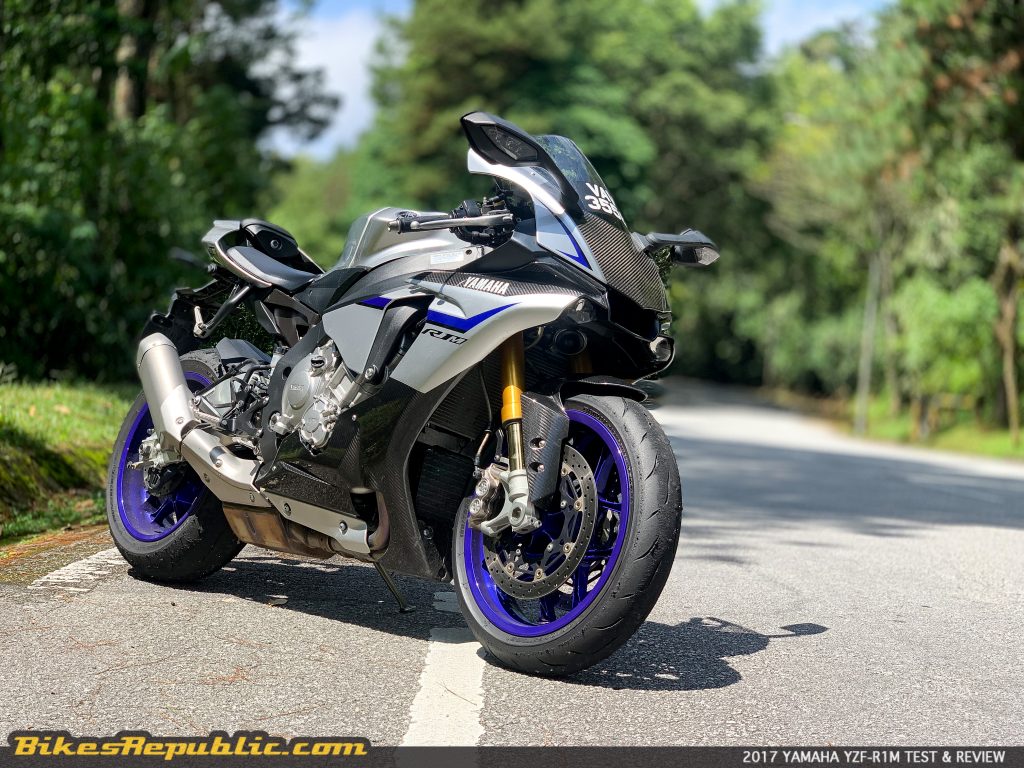