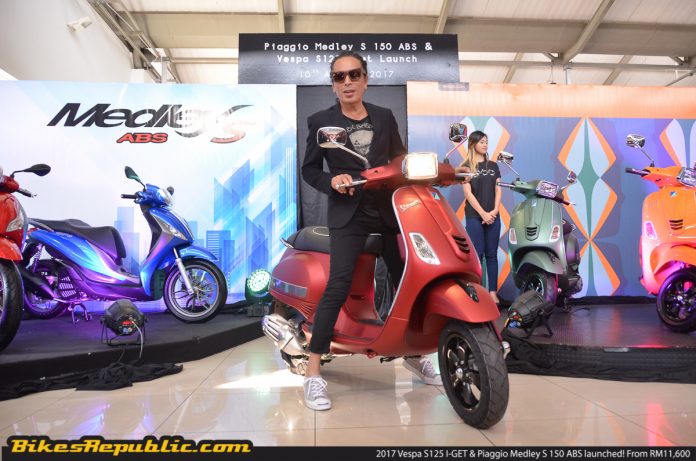 The new scooters were launched earlier today in conjunction of the official launch of the NAZA Merdeka Autofair 2017 located at the NAZA Automall, Petaling Jaya. 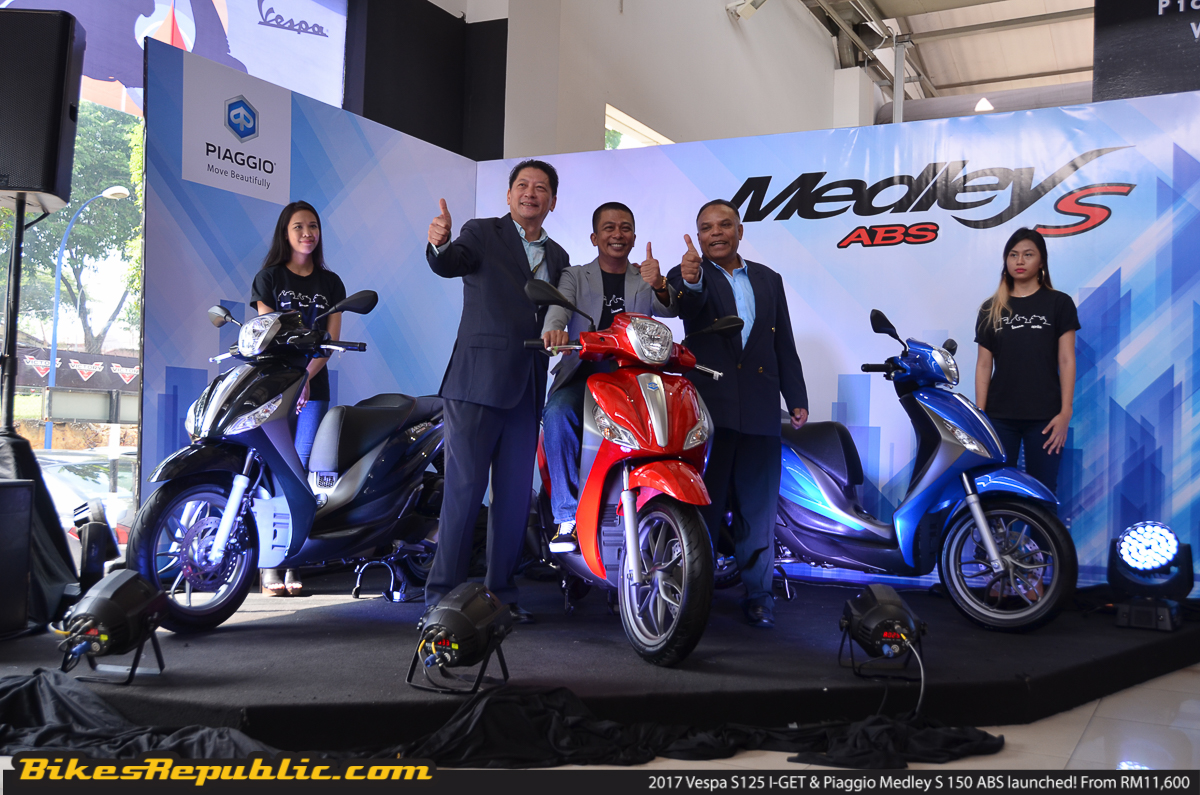 Naza Premira Sdn Bhd, the official distributor of Vespa and Piaggio scooters in Malaysia has just launched their latest Vespa S125 I-GET and Piaggio Medley S 150 ABS for 2017. The new scooters were just launched at the new Vespa Lifestyle Centre during the Naza Merdeka Autofair 2017 held at the Naza Automall, Petaling Jaya. 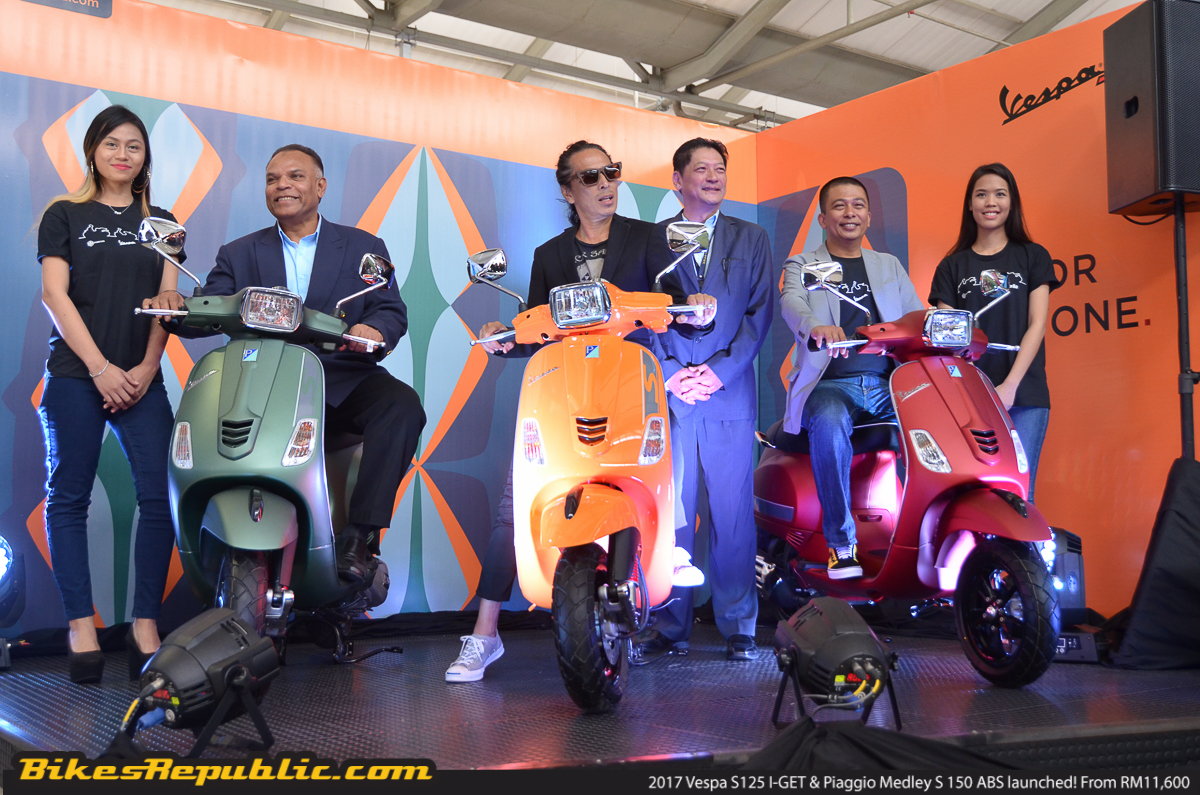 The updated 2017 Vespa S125 I-Get is the latest entry-level variant from Vespa that’s perfect for new bikers as well as those who are looking to look that perfect commuting alternative especially in and out of cities like Kuala Lumpur. 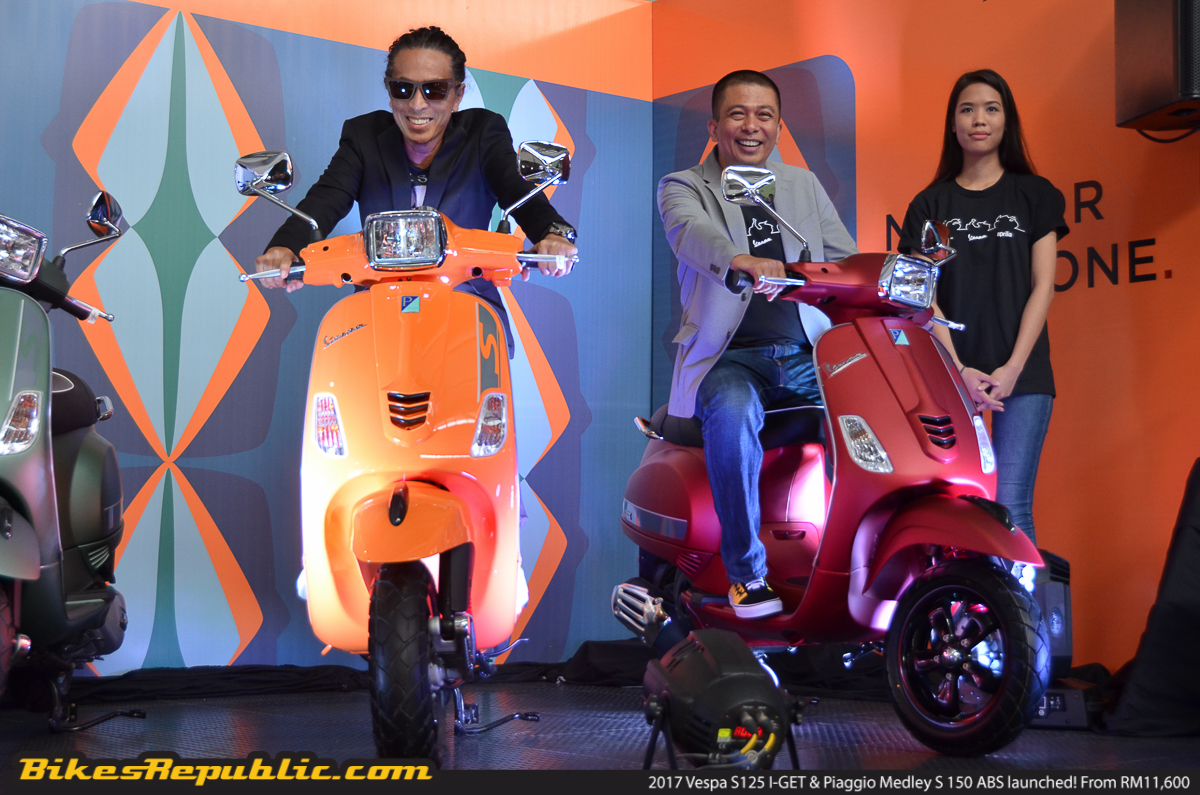 The ever youthful appearance of the new S125 is perfect for the youngsters who had just obtained their motorcycle license. Complemented with trendy styling such as the new rims, muffler design and graphics, even professionals would look great upon reaching their offices in the vast urban concrete jungles. 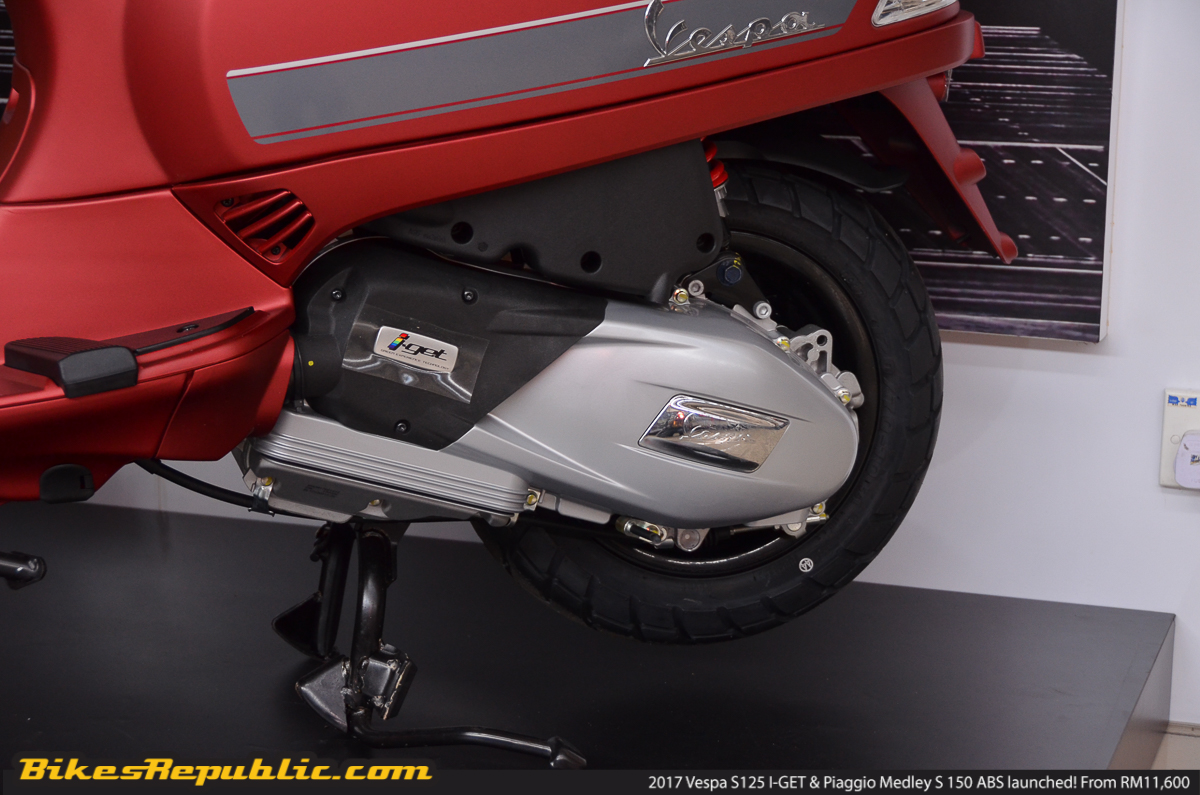 The latest S125 I-Get comes with a reworked 124.5cc, Euro3-compliant, 3-valve,fuel-injected engine that churns out 10.2hp at 7,000rpm and also 10.2Nm of torque upon reaching 6,000rpm. Not the highest we’ve seen but it’s more than enough to provide a comfortable commuting speed. 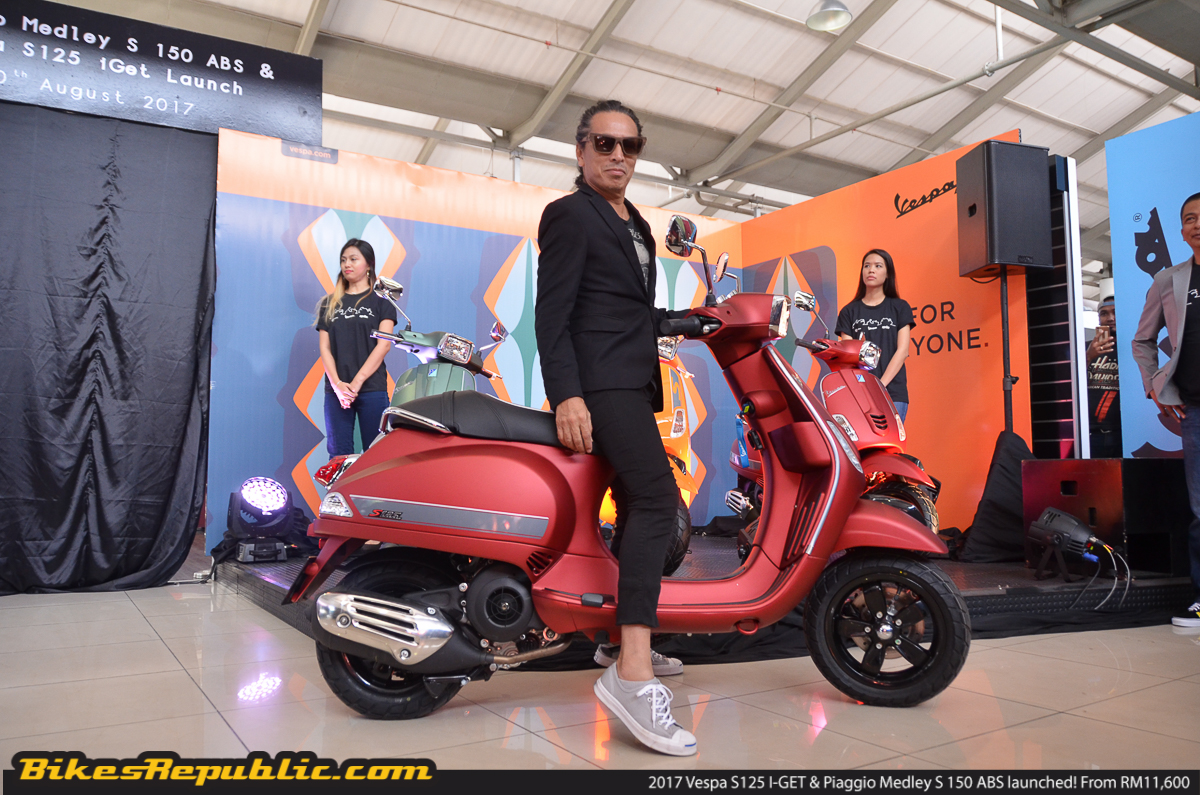 The new engine has been updated with a redesigned crankshaft, starter motor, gearbox cover, baromatic sensor and other updates to give the best riding package that’ll excite any rider young and old. 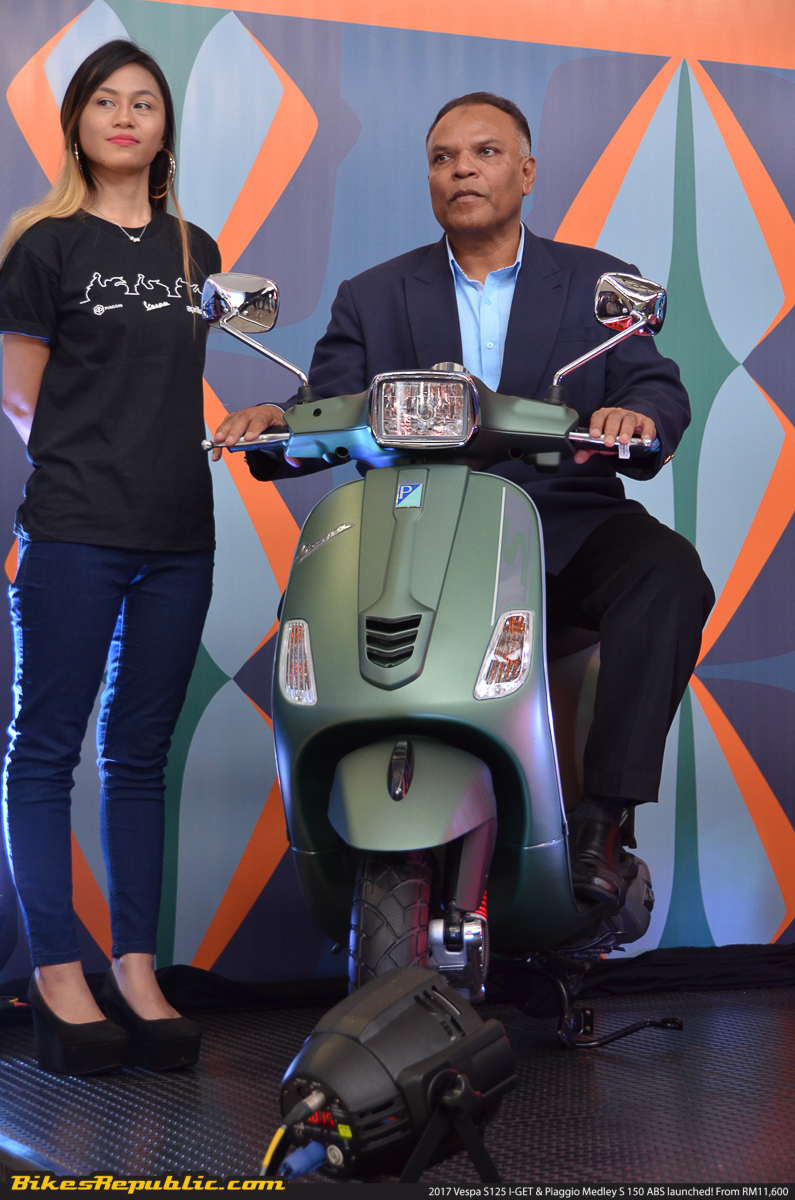 Similar to most modern day scooters, all the available power is transferred down to the rear wheel via a fully-automatic CVT gearbox and final belt drive. 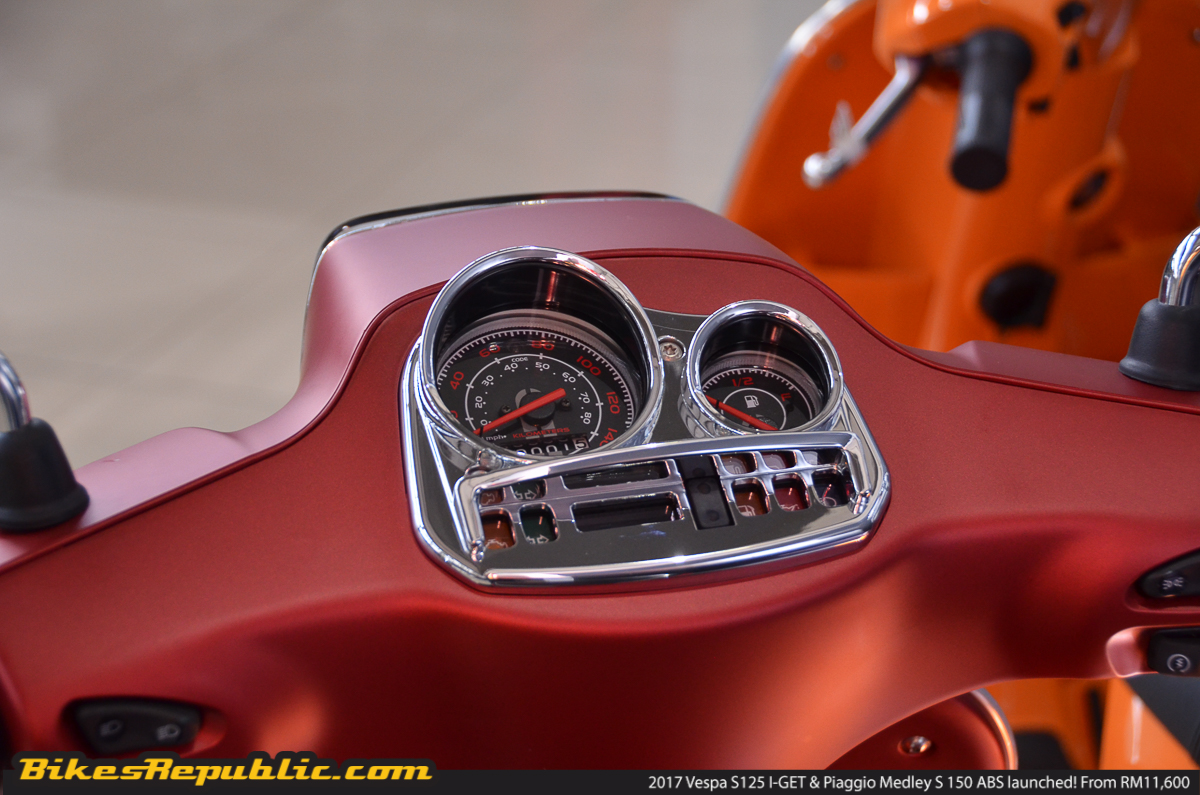 For added comfort, the Vespa S125 I-GET also comes with suspension package comprising of a front single arm with helical spring plus single double-acting hydraulic shock absorber. For the rear, the S125 I-GET is equipped with a four-way preload-adjustable rear shock absorber. 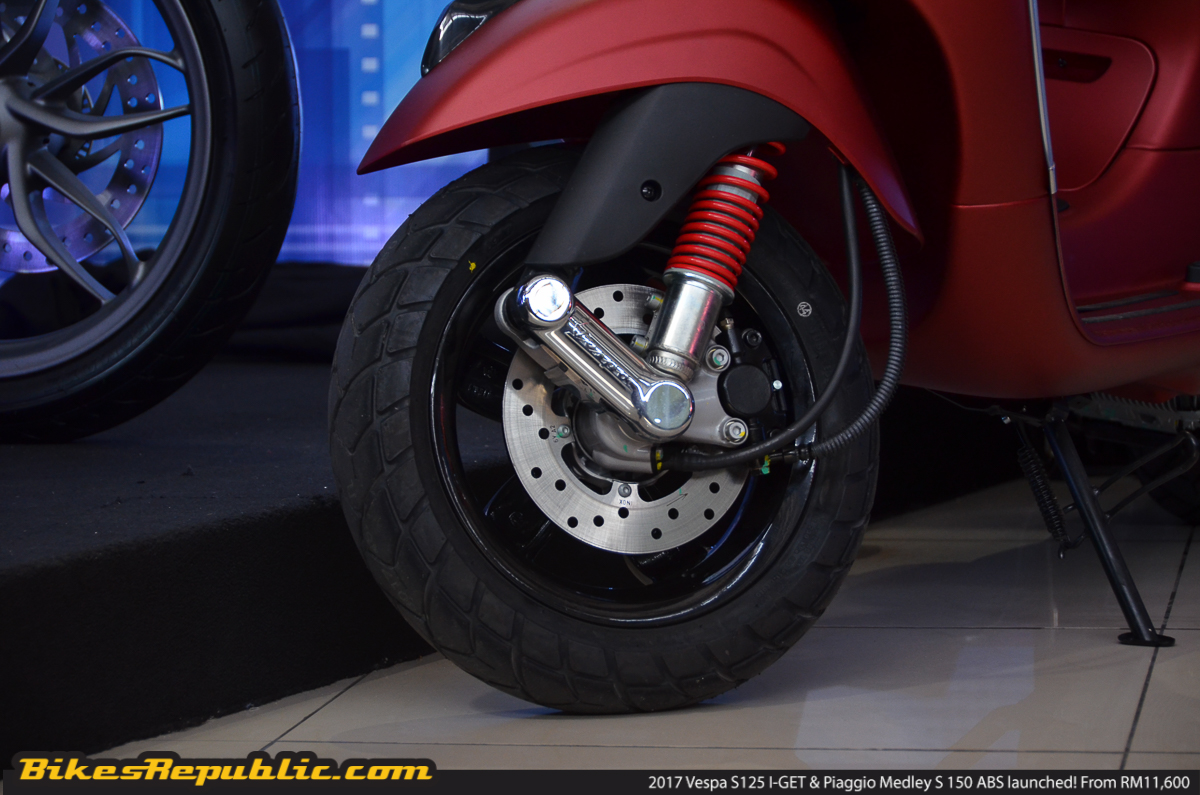 Interested in getting one of your very own? The new 2017 Vespa S125 I-GET is priced at RM11,600 (basic price with GST) and it comes in four awesome colourways; Girgio Titanio (Grey), Green Matte, Taormina (Orange) and Red Matte.

Those who are looking for something a bit different in terms of styling but don’t want to sacrifice any of that Italian passion and performance can opt for the new 2017 Piaggio Medley S 150 ABS. 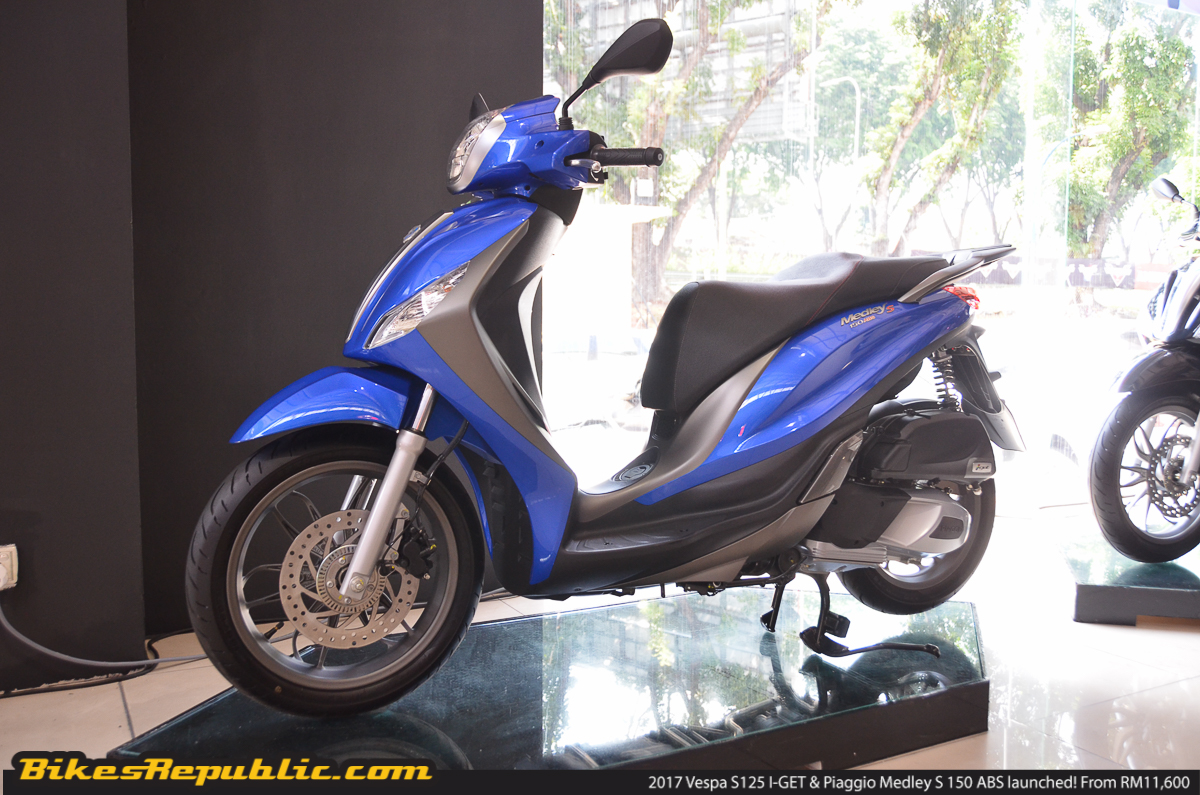 Literally standing higher above that other scooters in the current market, the new Medley S 150 ABS is powered by Piaggio’s I-GET four-stroke, single-cylinder, four-valve, engine that has been primed with a “Start and Stop” system for better fuel consumption. 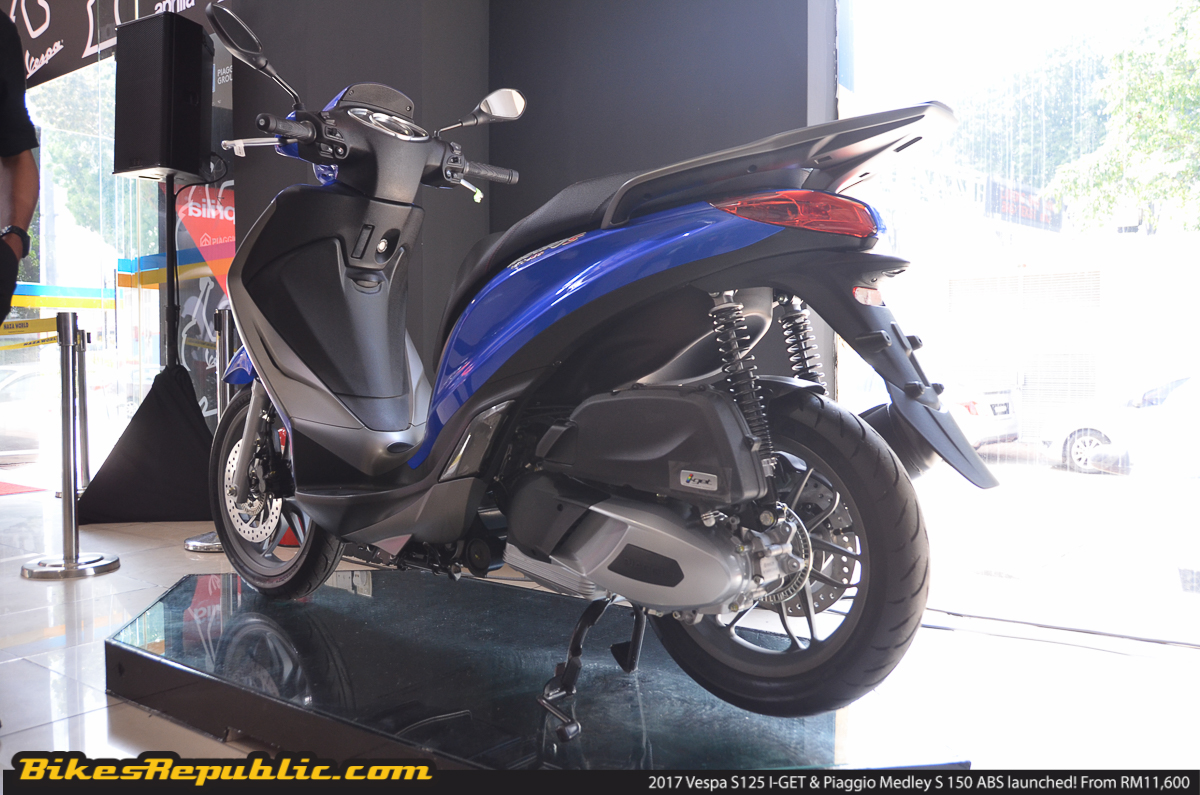 The Euro4-compliant engine produces a healthy 14.8hp at 7,750rpm and 14.4Nm of torque at 6,400rpm. This means that it has more than enough juice to get your in, out and around town with ease. Feeling like some Lemang To’Ki on Sunday? The new Piaggio Medley S 150 ABS will get you there with no worries. 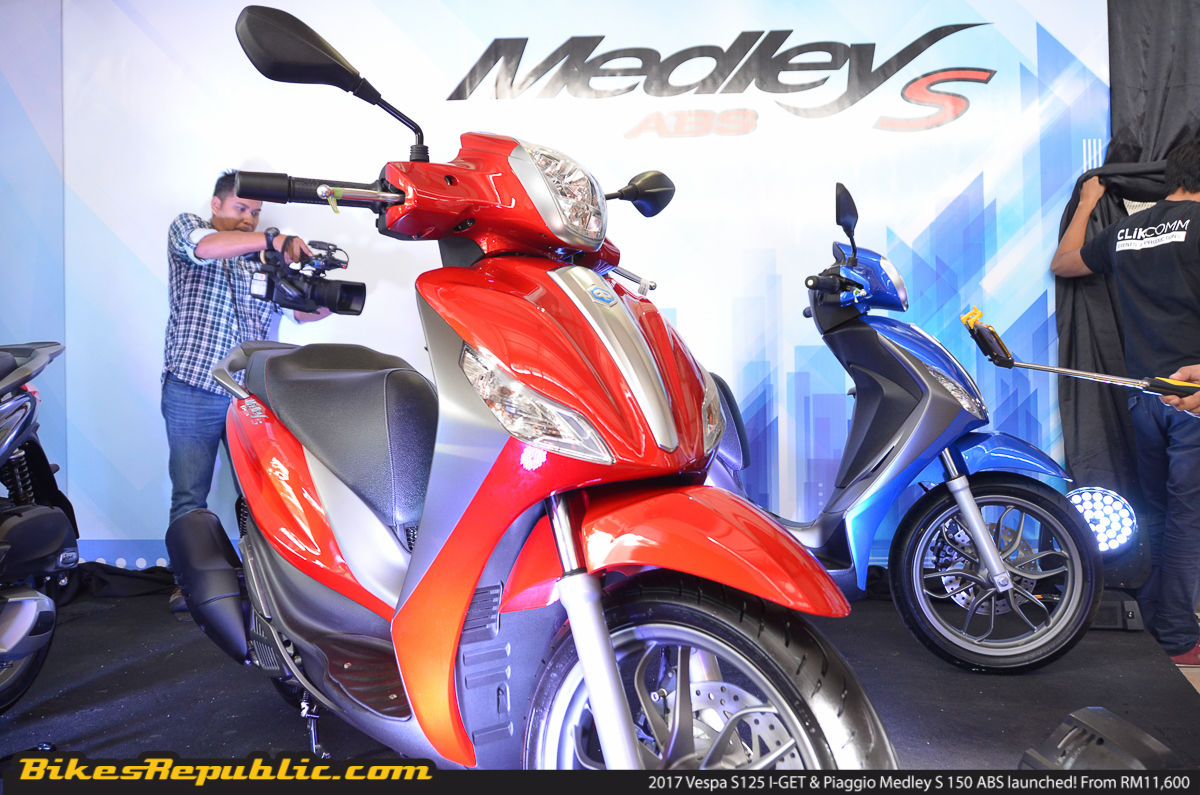 In terms of looks, the Medley S 150 ABS still has that premium facade that has been specifically designed for urban commuters looking for that perfect transport alternative to switch from their everyday four-wheelers. 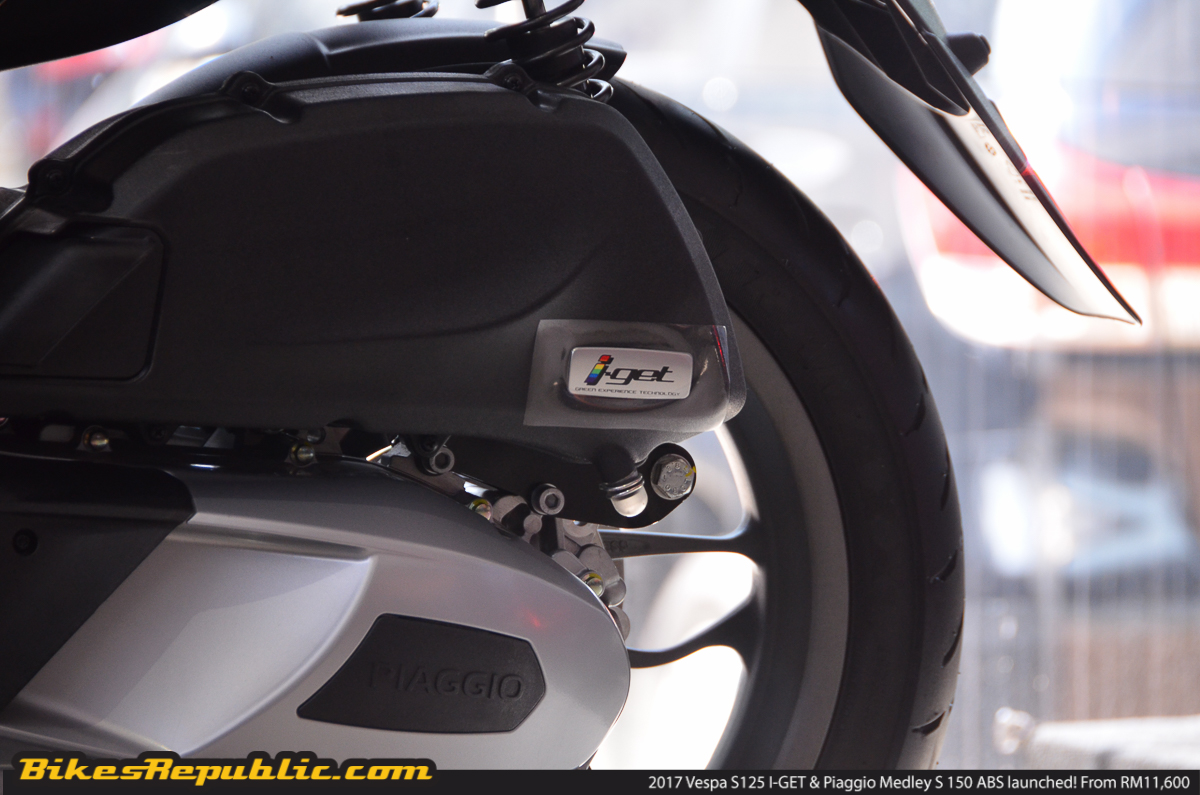 The surfaces have been extended for better aerodynamic performance as well as improved riding comfort. Even the handlebars have been designed to deflect wind away from the rider for super riding performance.

If you’re always on the go, the new Medley S 150 ABS comes with several storage compartments to store all your belongings away from the harsh weathers. Running out of batteries on your mobile devices? Fear not as the new Medley S comes with a USB port to help recharge back your batteries to their former glories. 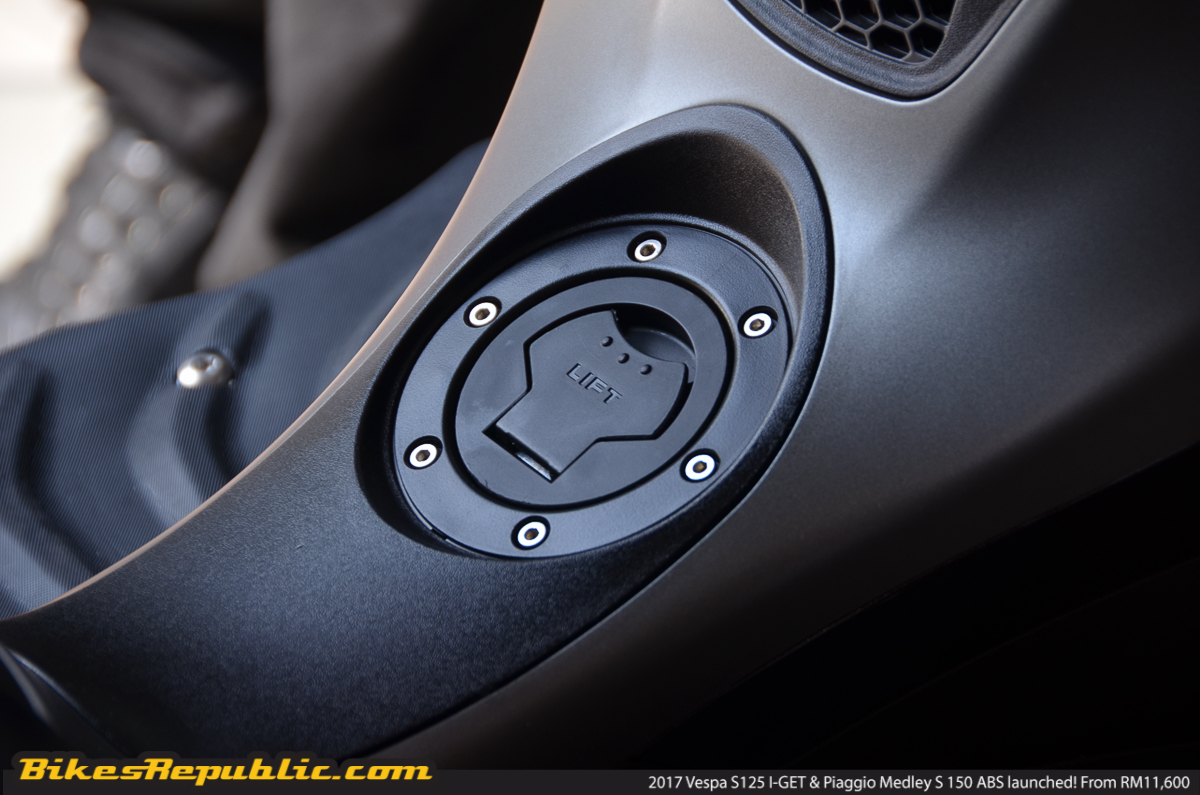 Going to the suspension package, the Medley S has been equipped with a front hydraulic telescopic fork and rear double dual effect hydraulic shock absorber that allows the rider to adjust the spring preload at five different stages. 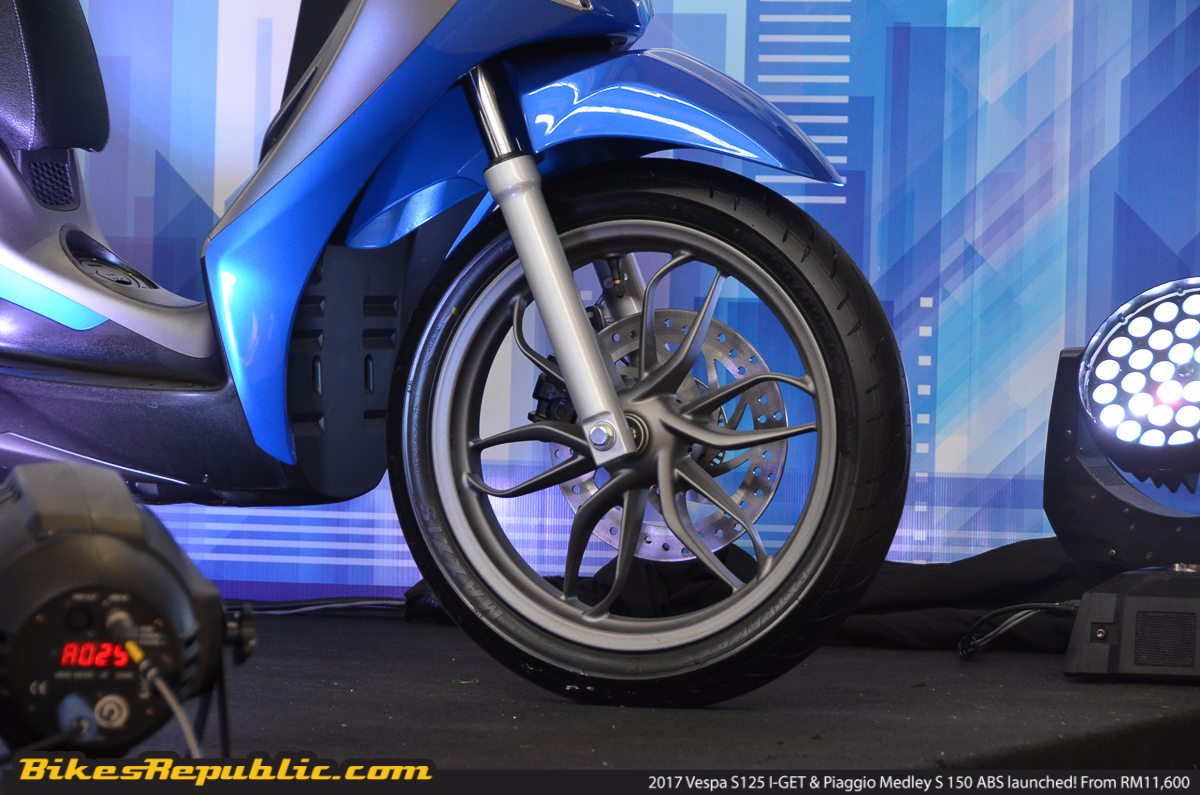 Moving to the brake system, the Medley S 150 ABS is safer than ever with dual-channel ABS for both its front 260mm disc and rear 240mm disc brakes which are equipped with twin-piston floating callipers. 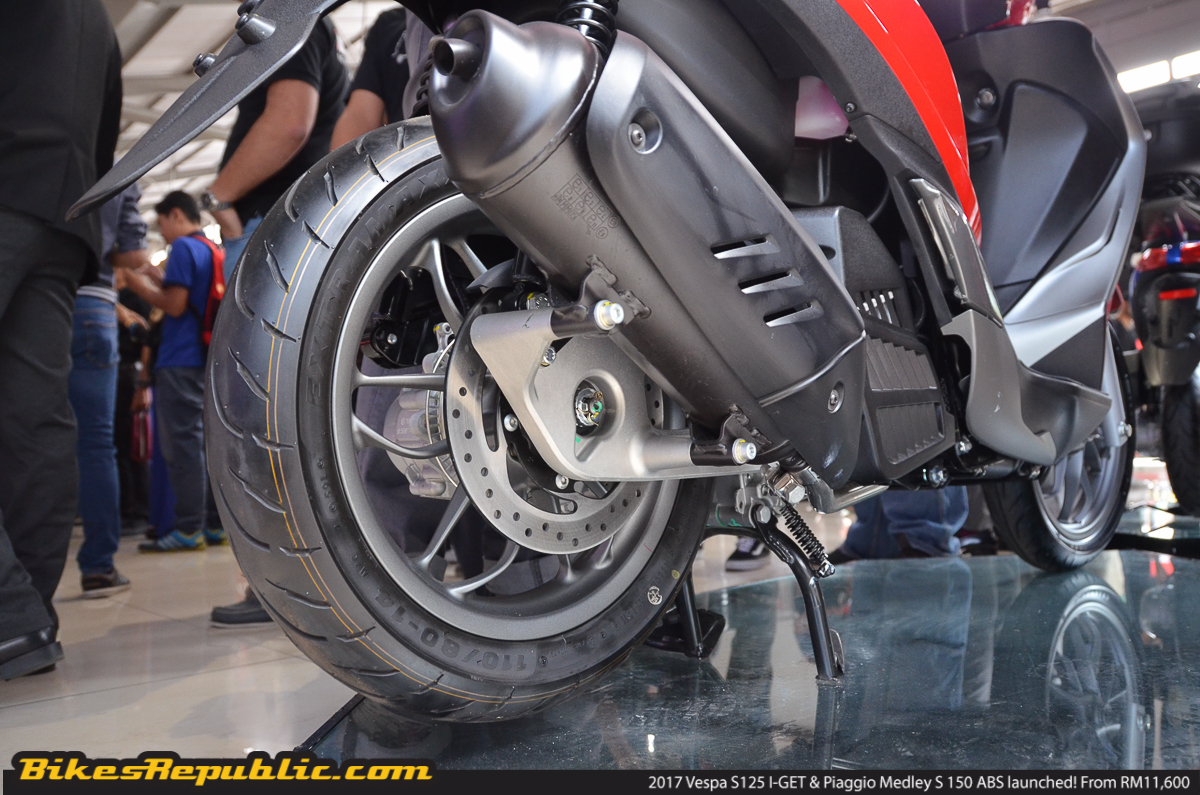 With a 7-litre fuel tank paired with Piaggio’s fuel-saving I-GET engine, the Medley S 150 ABS has the ability to cover quite a distance before it needs refuelling. 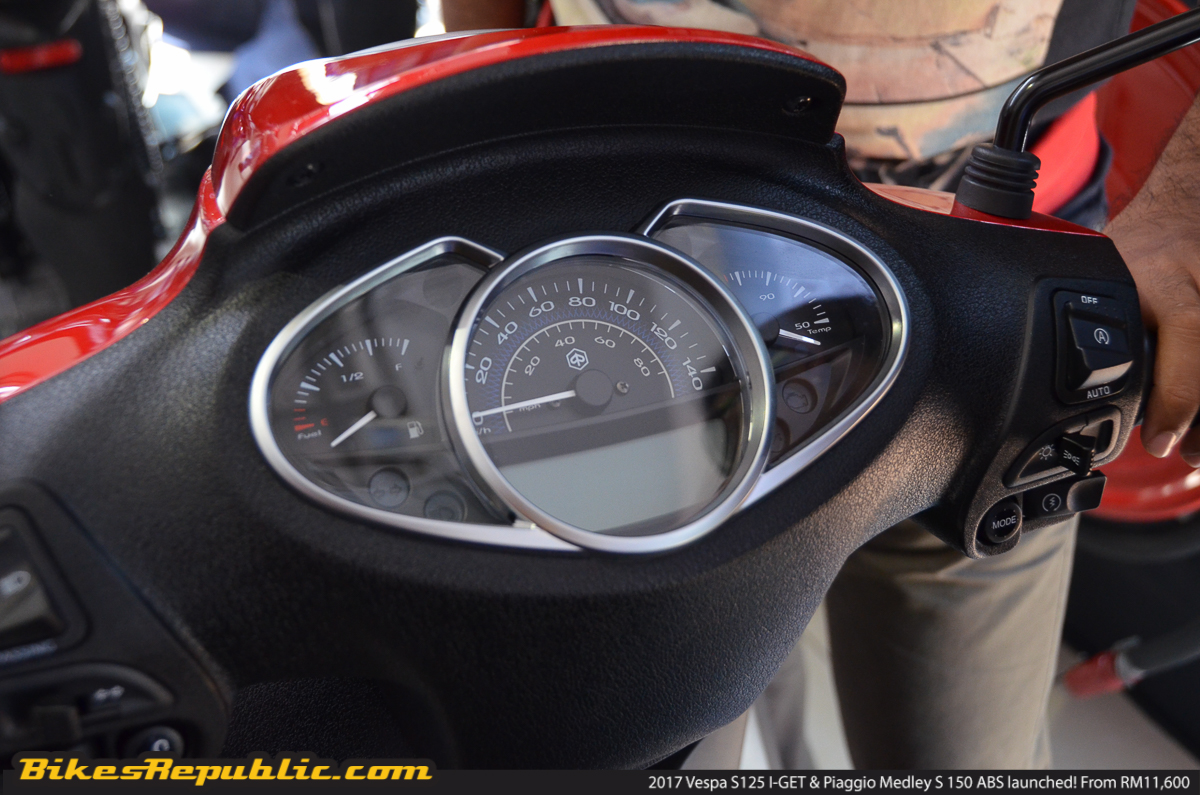 Naza Premira Sdn Bhd has priced the 2017 Piaggio Medley S 150 ABS at RM17,000 (basic price with GST).  In conjunction with the NAZA Merdeka Autofair 2017, the first 33 units purchased will get a rear carrier, top box, back rest, floor mat and two years free service on top of the standard two years manufacturer warranty. 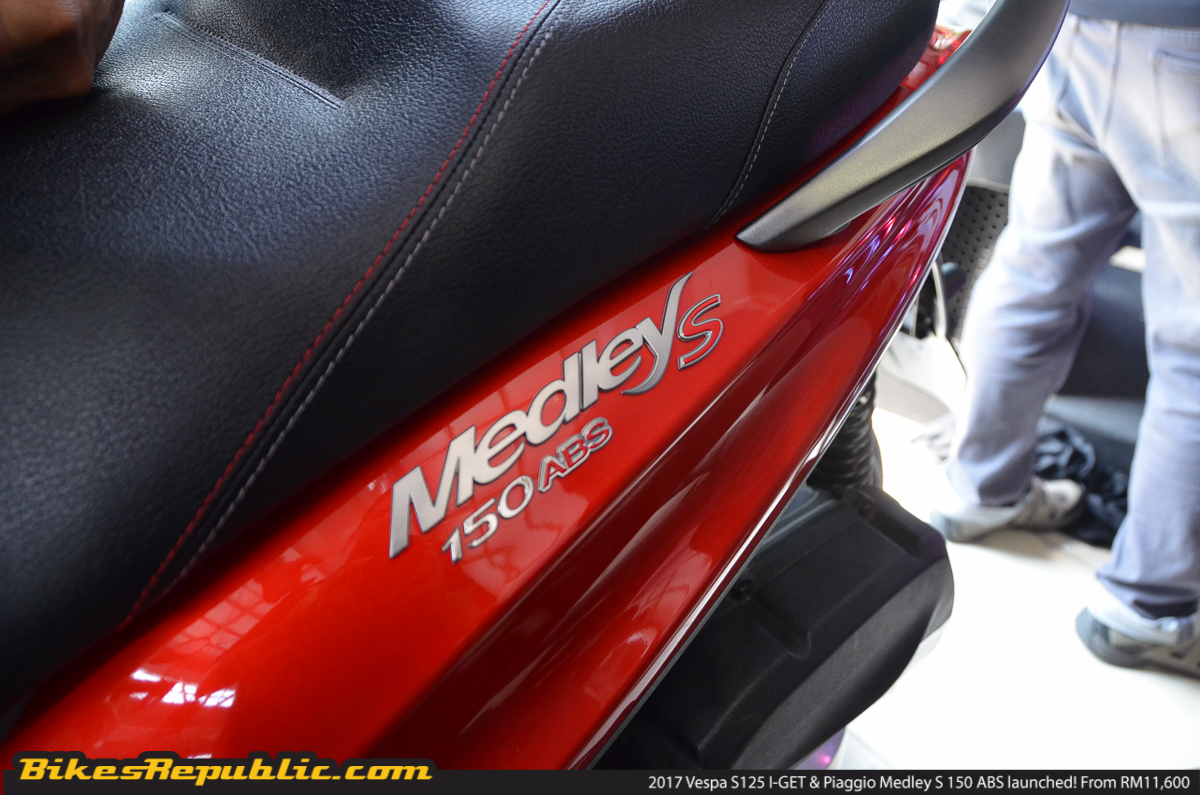 The NAZA Merdeka Autofair 2017 is happening today from 10 August 2017 until 13 August 2017 located at the Naza Automall, Petaling Jaya.