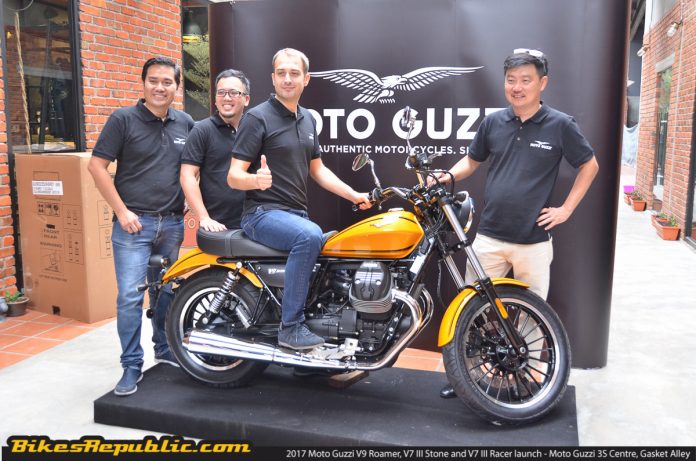 The 2017 Moto Guzzi V7 III Stone, V7 III Racer and V9 Roamer have been launched earlier today at the Moto Guzzi 3S Centre which will open its doors in August 2017.

The new bike introductions were followed right after the announcement of Didi Resources Sdn Bhd as Malaysia’s official distributor and supplier. 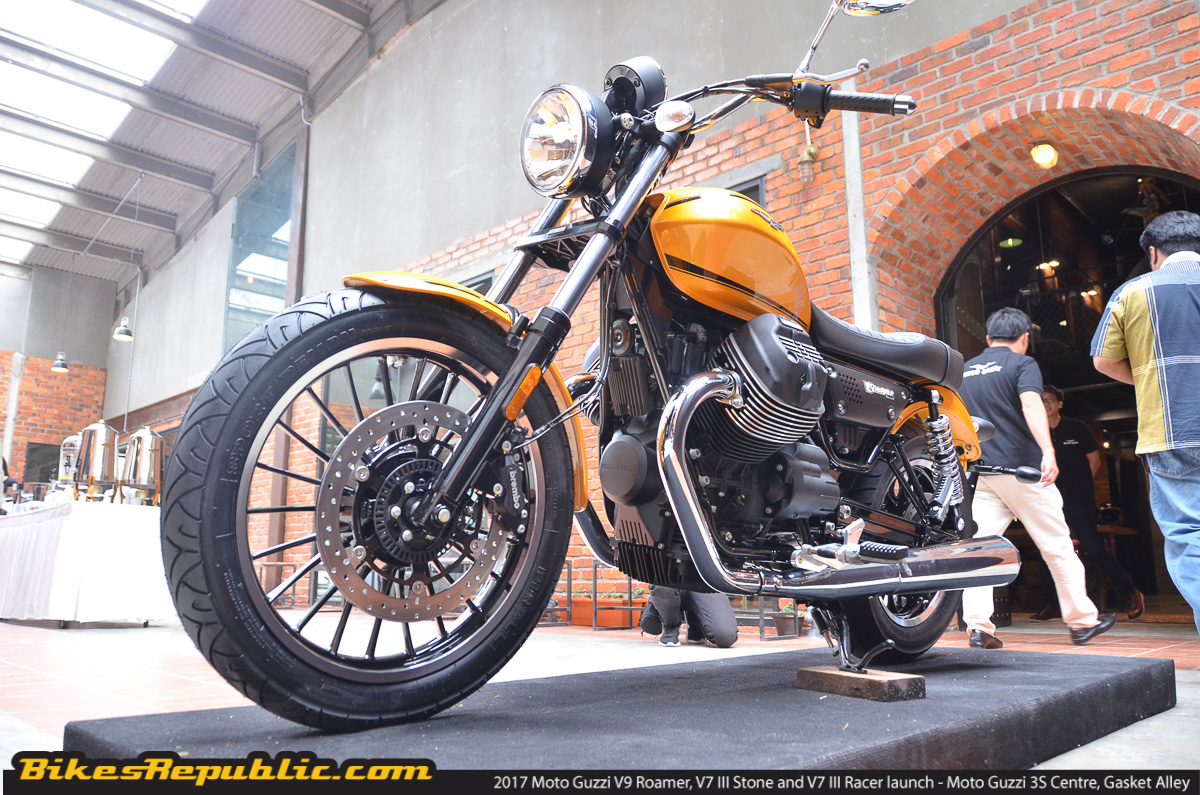 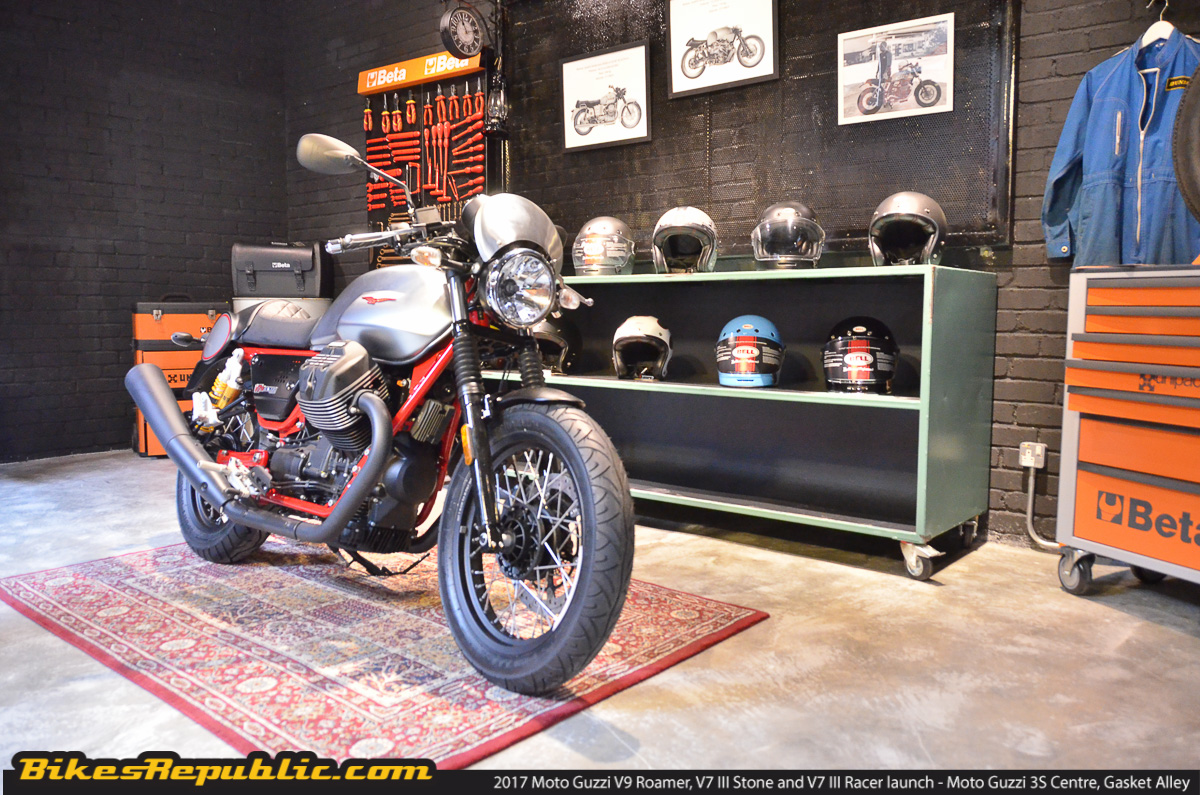 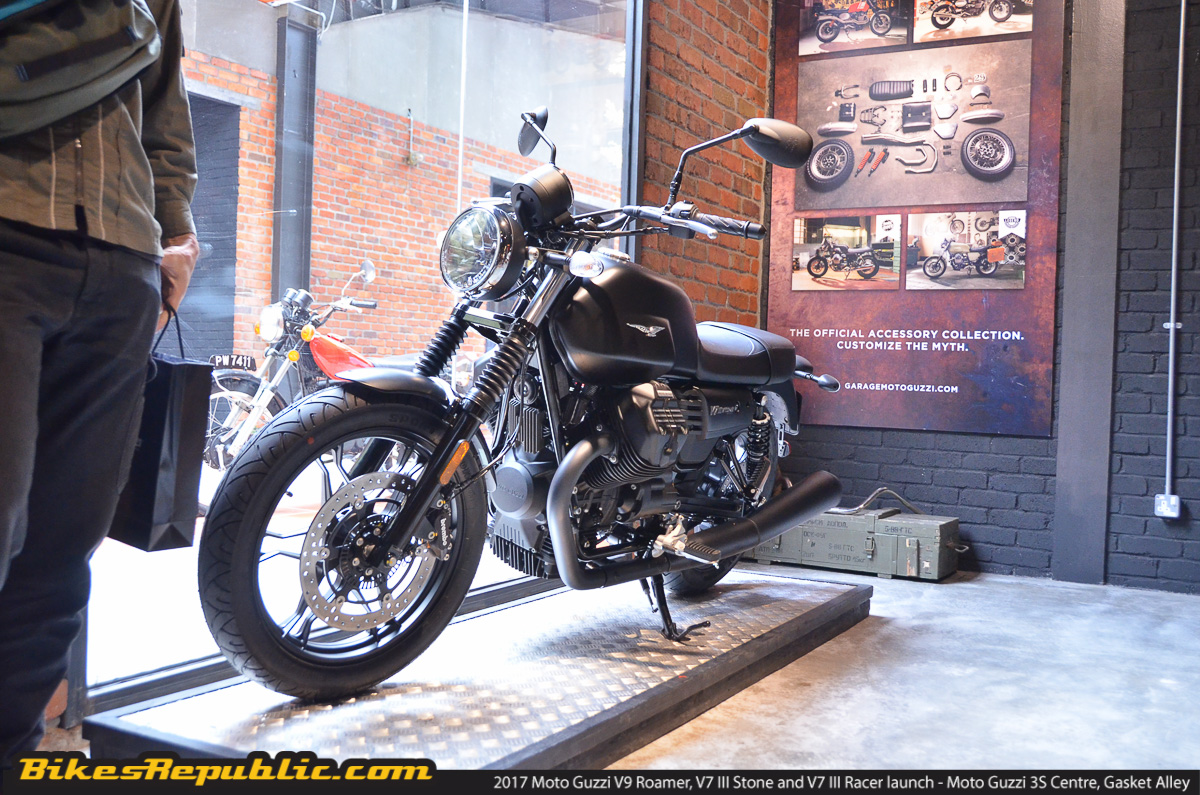 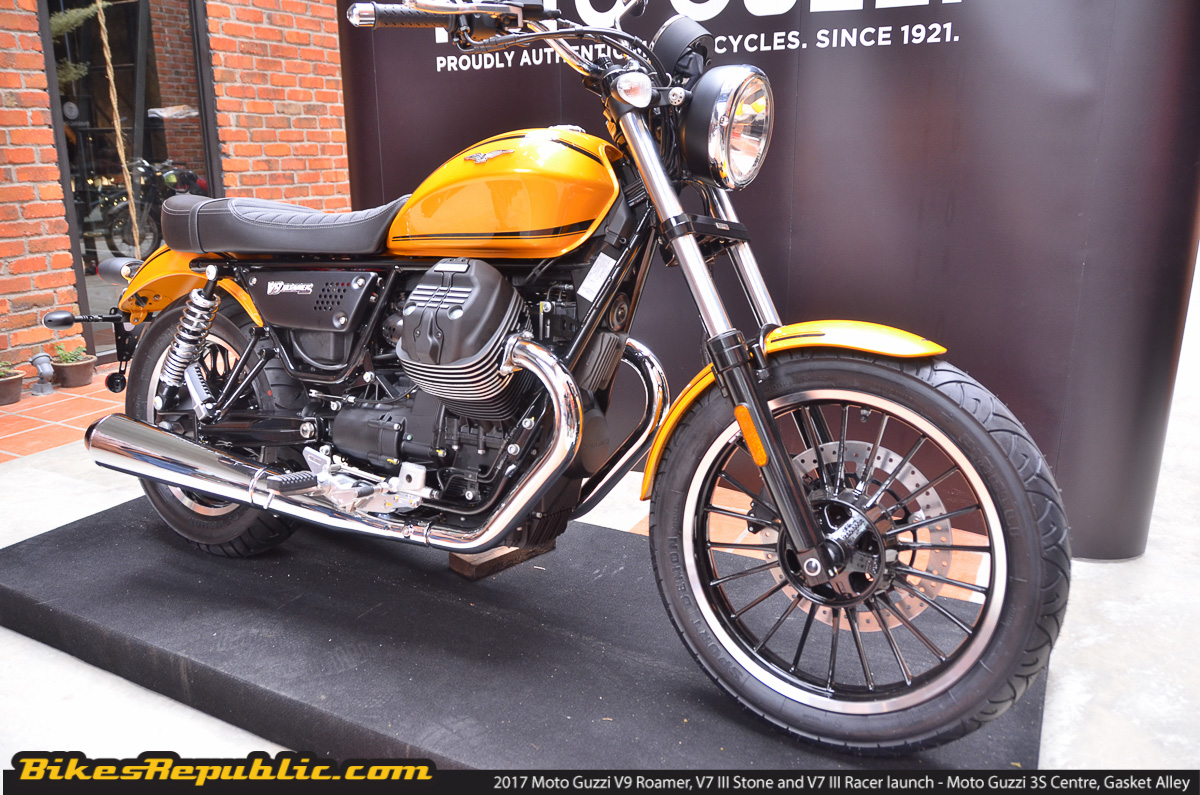 Today’s event also brought the launches of only half of what Moto Guzzi will be offering this year. The most highly anticipated model of course is the 2017 Moto Guzzi V9 Roamer. The latest cruiser offering from Moto Guzzi comes with a reworked 850cc Euro4-compliant transverse 90-degree V-twin engine which churns out a healthy 55hp at 6,250rpm and 62Nm of torque at 3,000rpm. 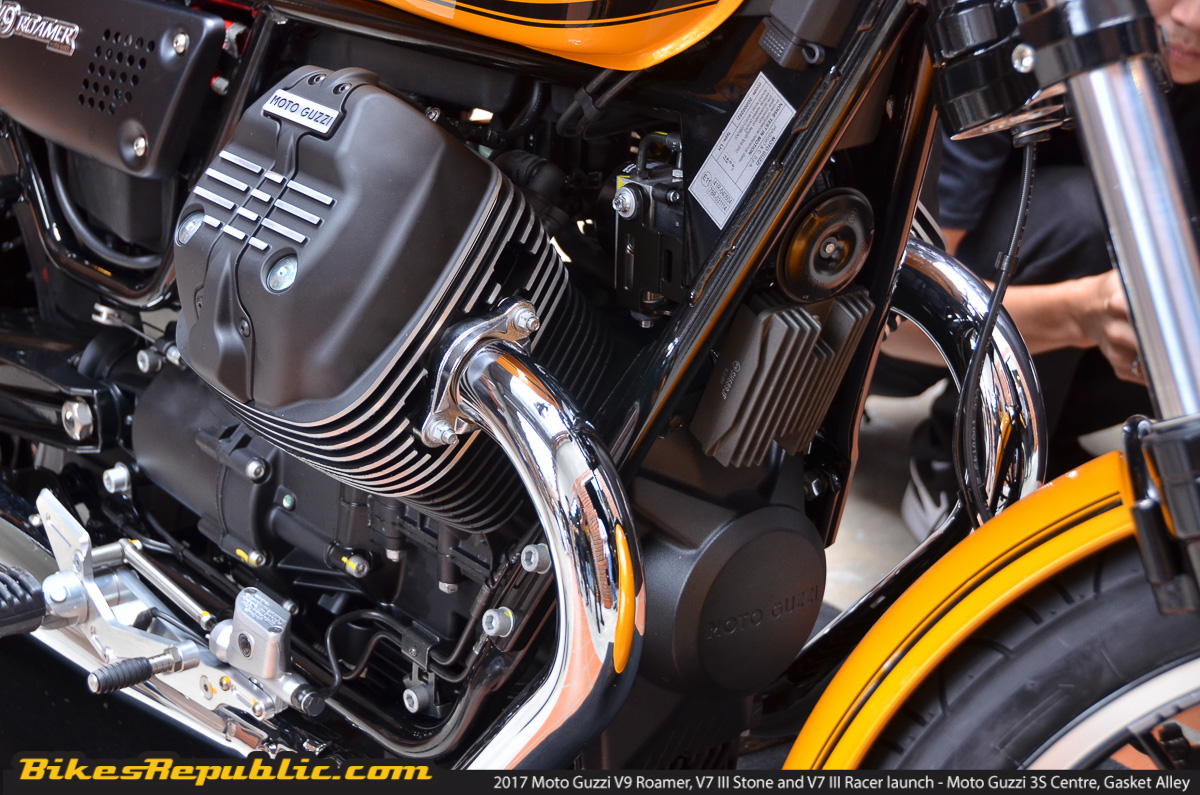 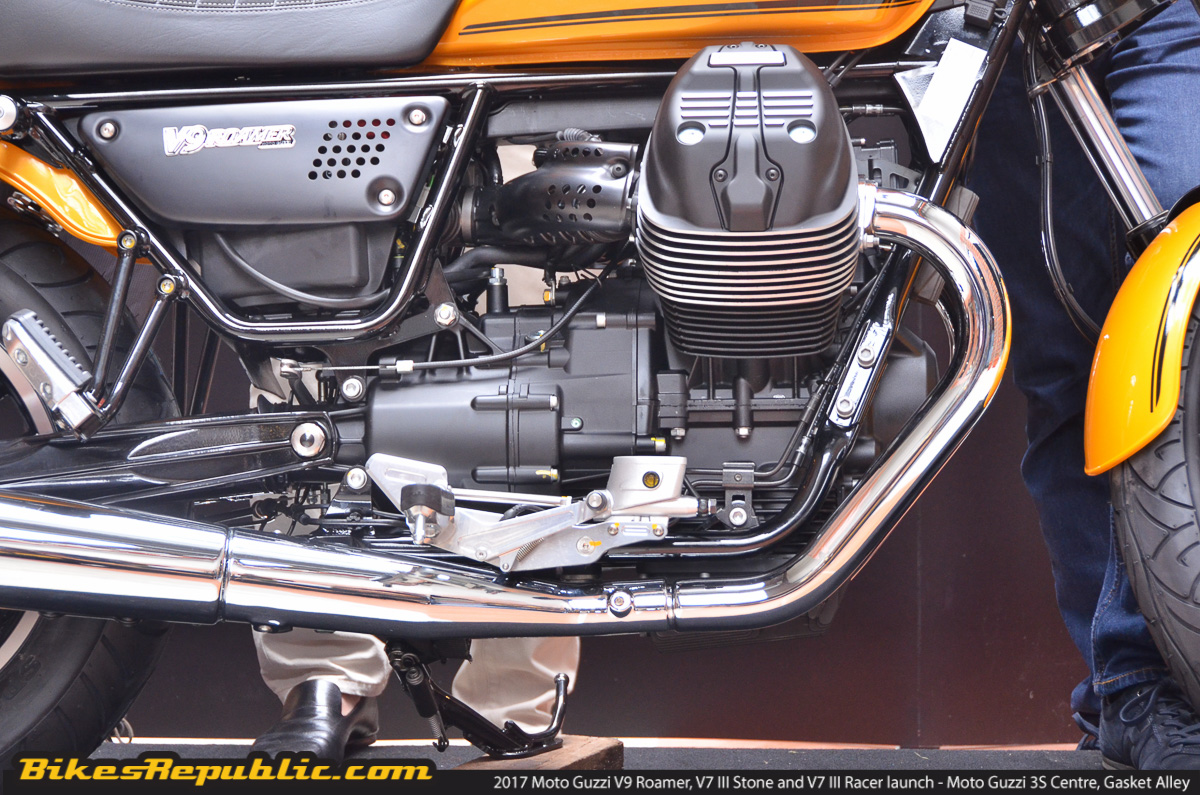 In terms of looks, the V9 has gone through an evolution where the riding ergonomics have been enhanced for better riding feel, handling with a more upright position that’ll provide extra comfort on those long journeys. 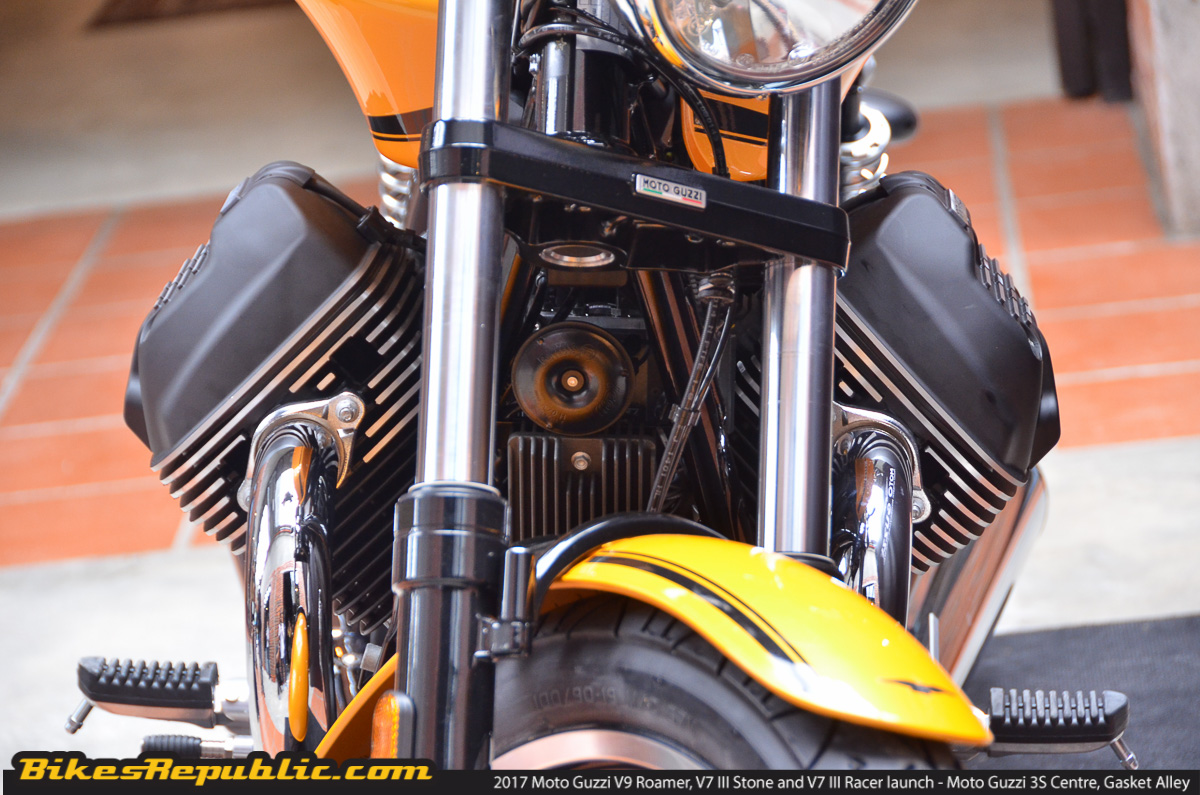 To make sure that the bike stops on a dime safely, the new V9 Roamer has been fitted with a front 320mm stainless steel floating disc with Brembo four-piston calliper and a rear 260mm disc brake with a two-piston floating calliper. To further enhance the safety aspects of braking, the V9 comes with a dual-channel Continental ABS system and a switchable traction control dubbed the Moto Guzzi Controllo di Trazione (MGCT). 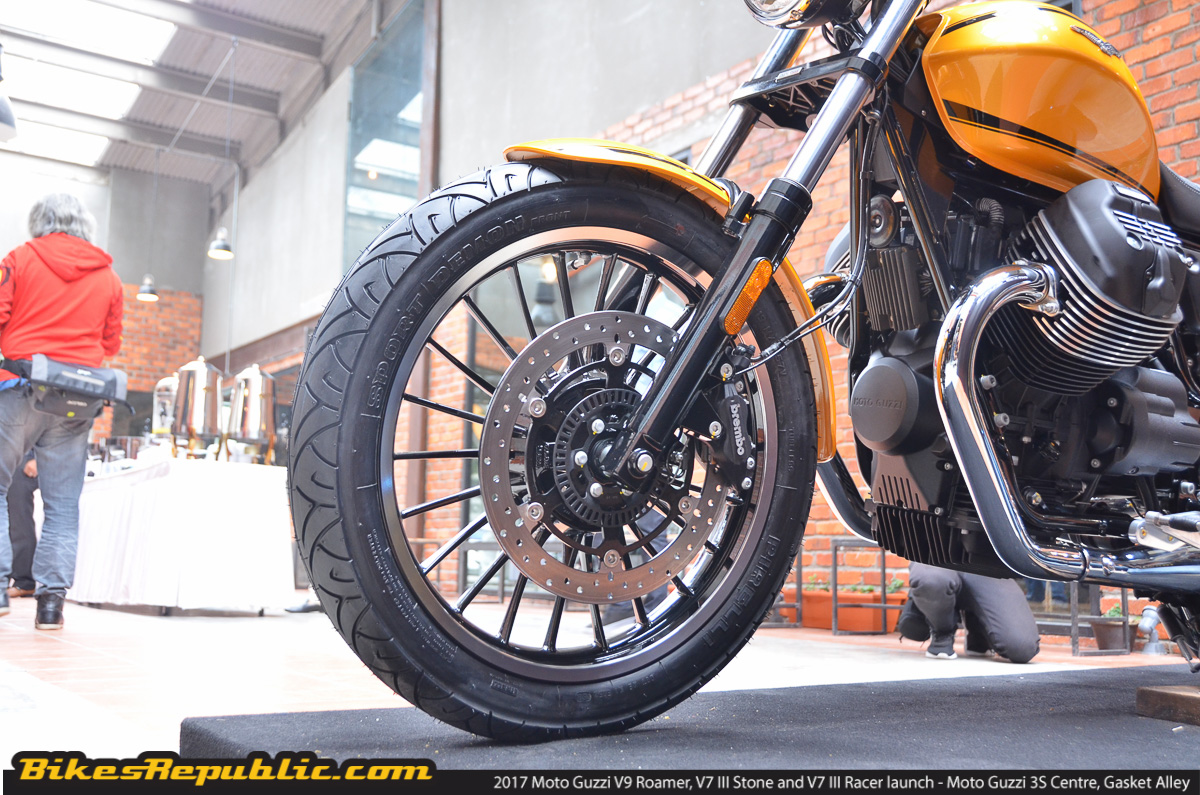 Compared to other cruisers in the same class, the new V9 Roamer stands out above the rest with quality workmanship using only aluminium and steel with no plastic parts. You may think that the bike might be quite heavy because of this but as it turns out, the V9 Roamer only weighs 199kg (dry). 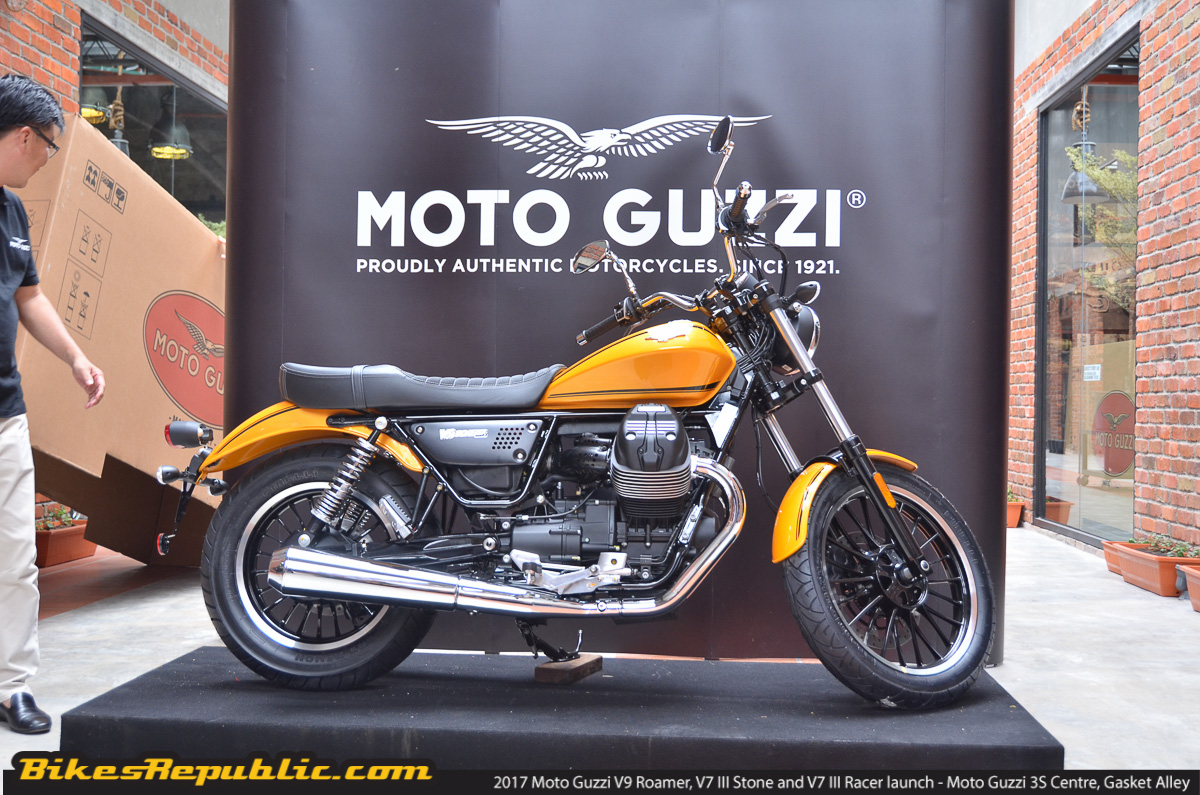 The 2017 Moto Guzzi V9 Roamer is priced at RM73,900 (basic price with GST). There’s also the V9 Bobber which will be introduced later during the showroom launch in August. 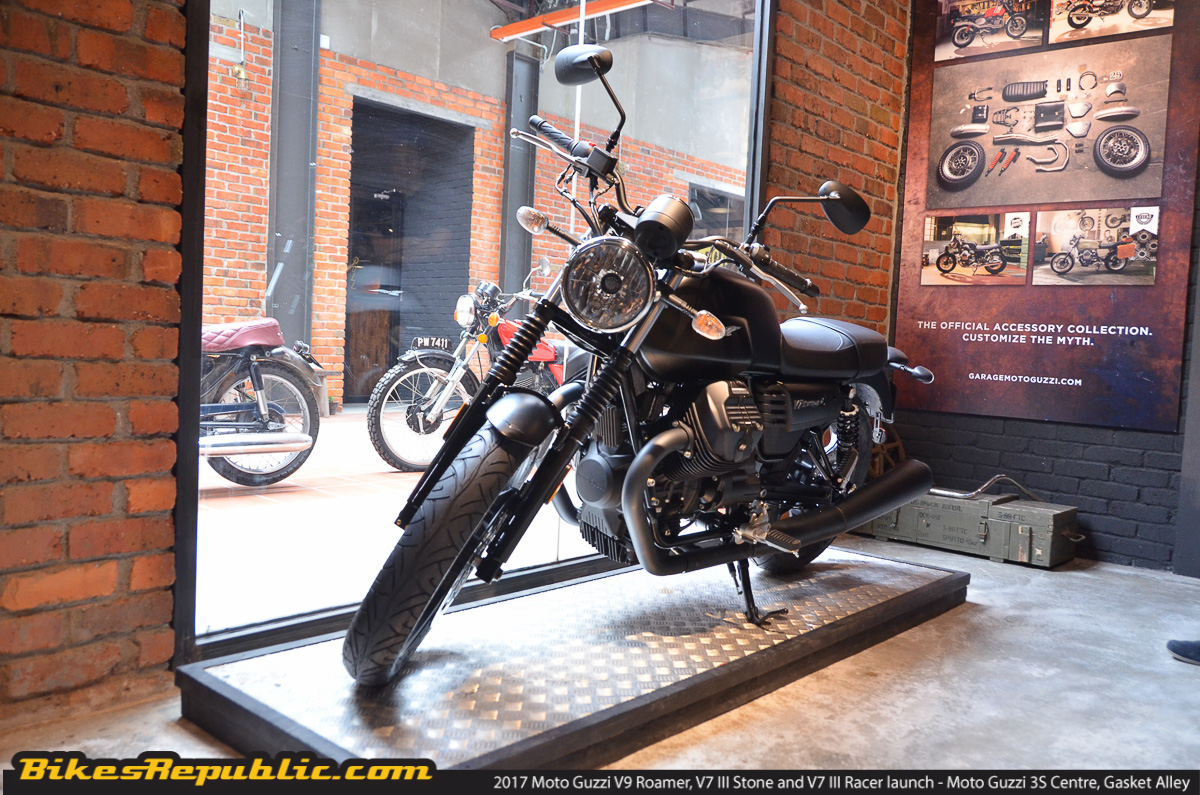 A pair of 2017 Moto Guzzi V7 III also graced us with their presence, specifically the V7 III Stone and V7 III Racer. One would easily think that the new V7 III looks quite similar to the previous generation but with the changing of time and technological advancements, the latest V7 III is developed with the latest stuff. 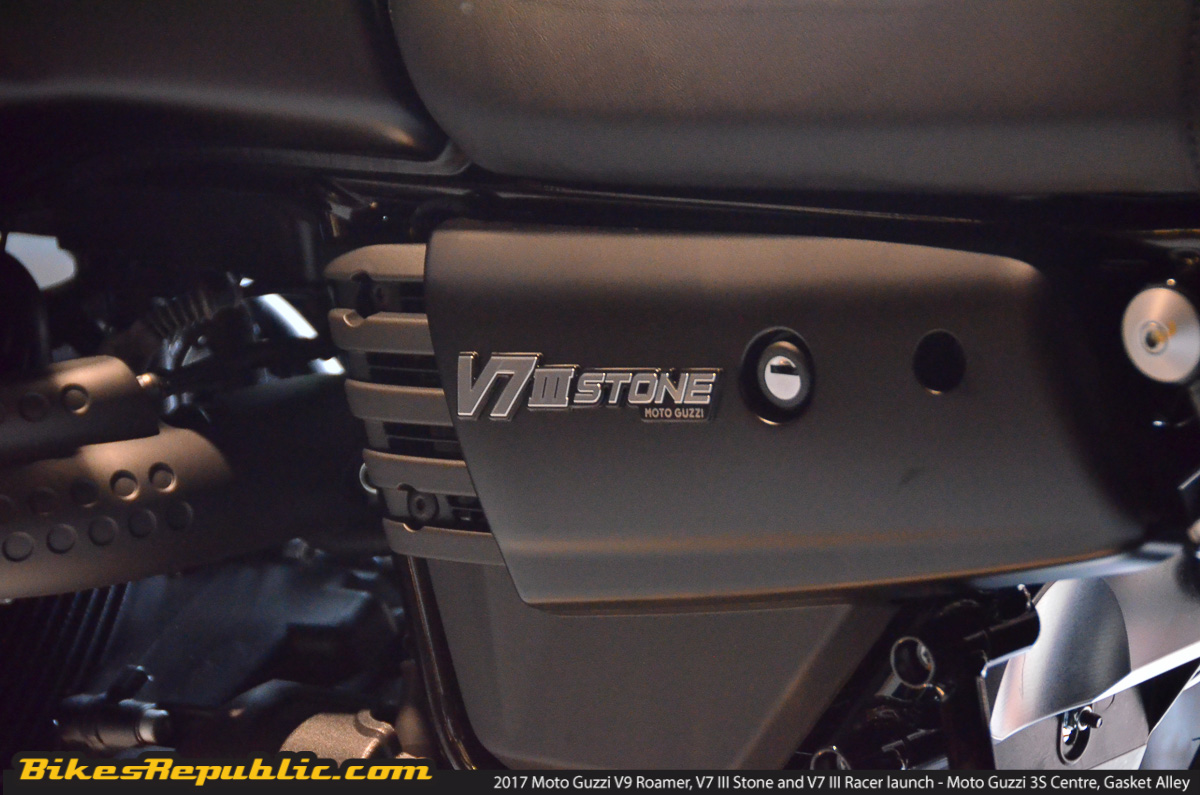 Powered by a 744cc, 90-degree, V-twin engine, the new V7 III churns out a good 52hp at 6,200rpm and 60Nm of torque at 4,200rpm. In translation, the new V7 III offers 10% more power output and all that power is transferred down to the rear wheel via a reworked six-speed gearbox that allows improved engagement and ease of use. 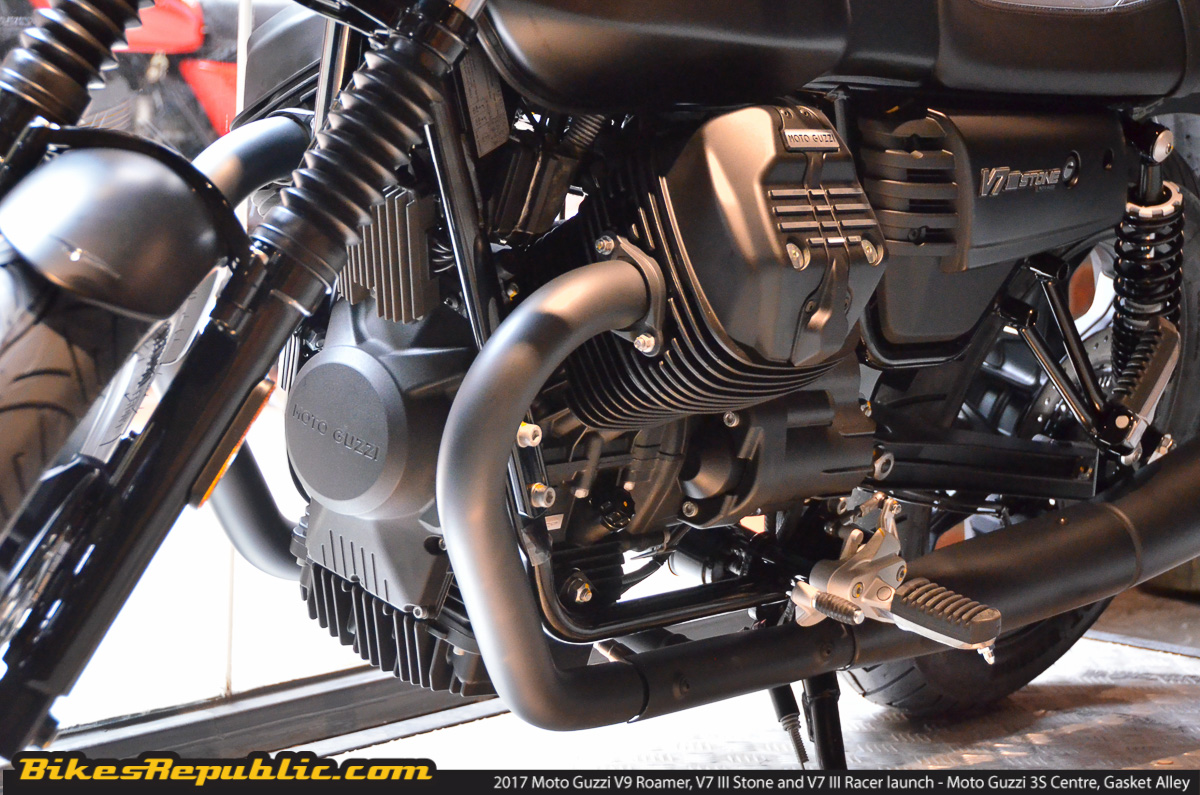 Like the new V9, the 2017 V7 III has also gone through some improvements in terms of design and riding ergonomics to provide all future riders a better riding experience throughout the rpm range and also any road conditions. 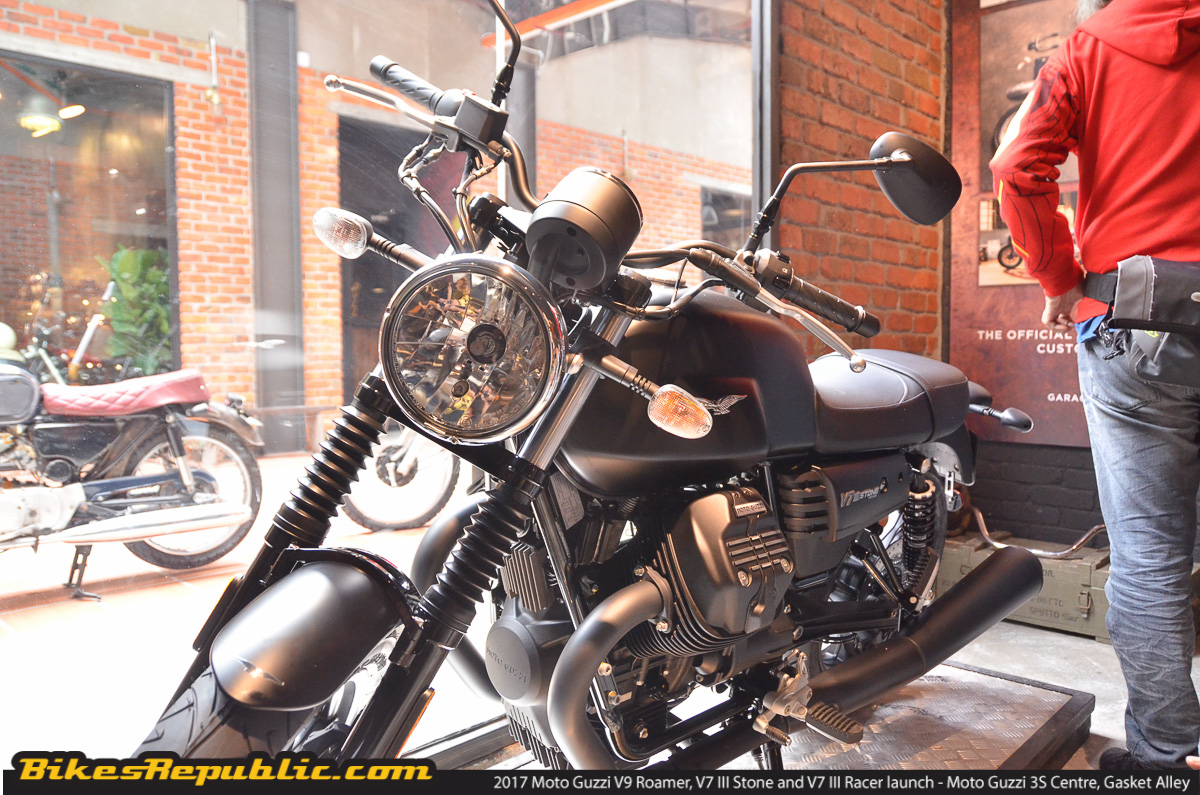 The design has been kept simple and clean especially the Stone model which allows greater customisation opportunities which is something that the Moto Guzzi 3S Centre located at Gasket Alley will be able to provide as well to help customers add their own personal touches to the beloved Moto Guzzis. 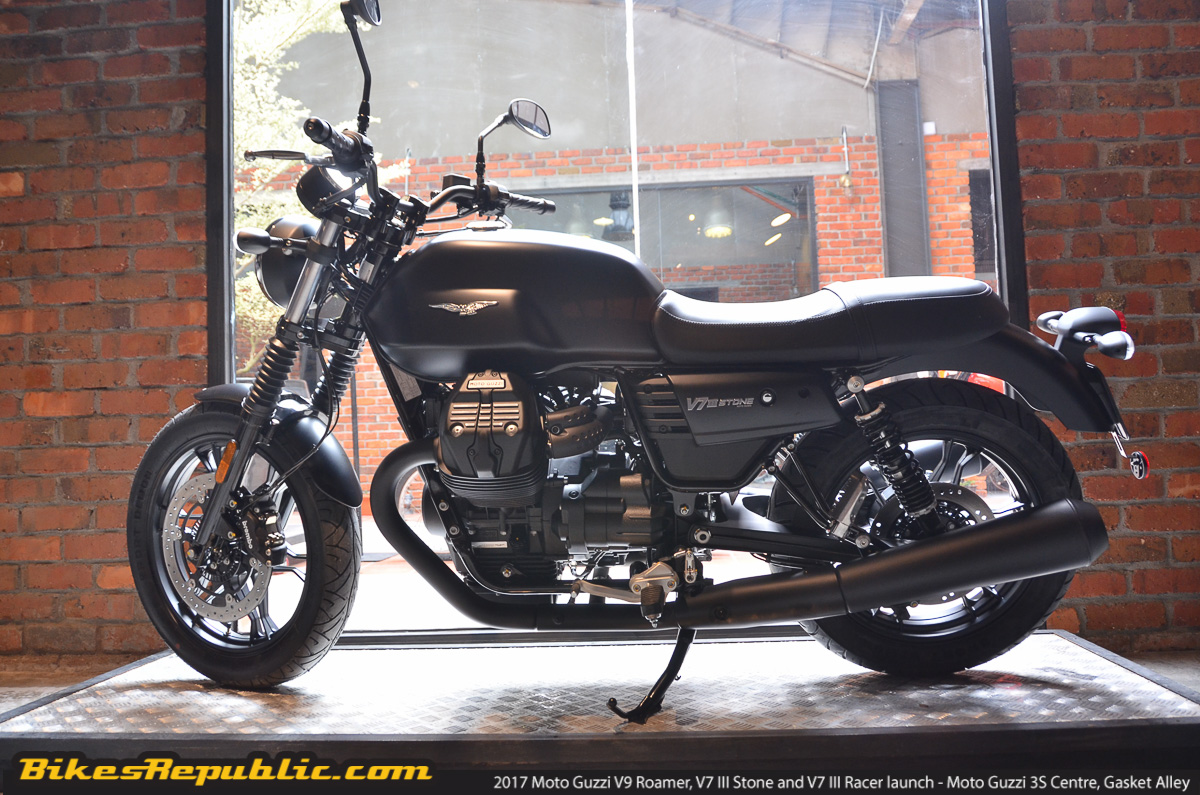 The new V7 III is also a very versatile bike that will cater to all sorts of riders especially with its low seat height. To make sure that you won’t have to constantly stop for fuel, all V7 III models come with 21-litre fuel capacity which is the biggest in its category. It’s also worth pointing out that the new V7 III comes with a two-level traction control system. 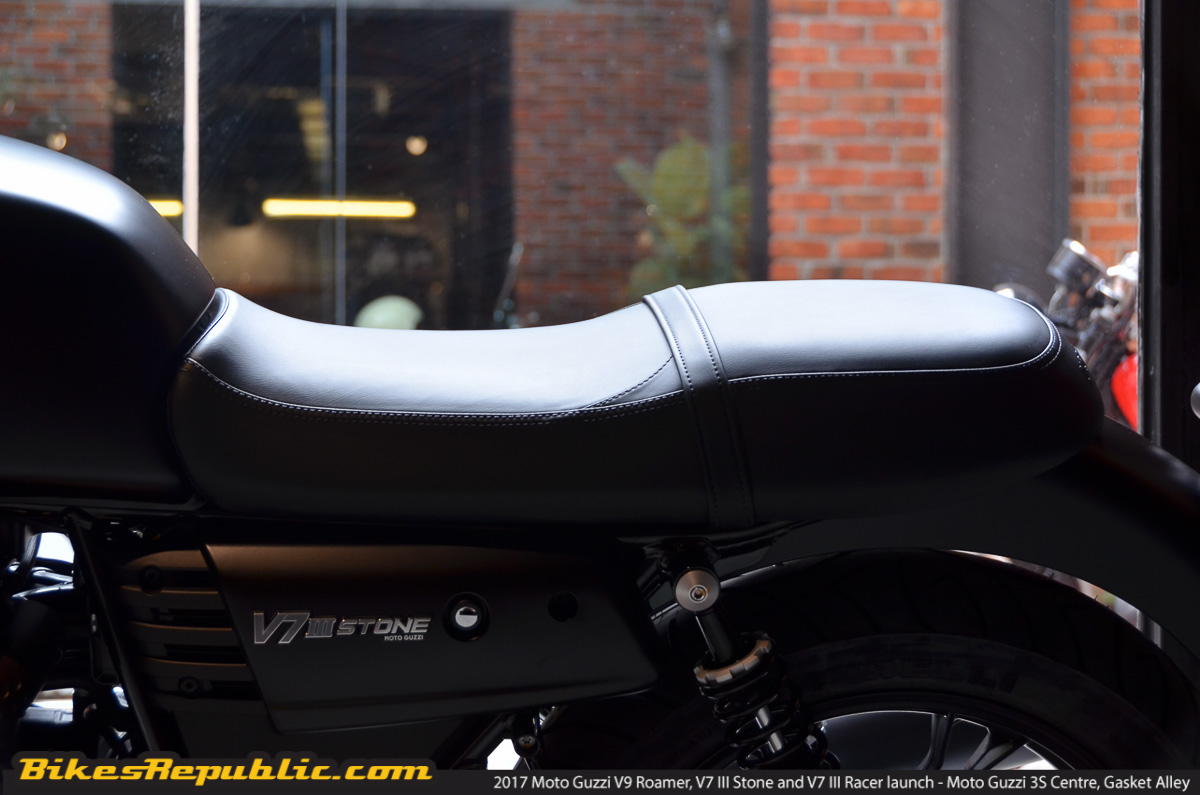 The 2017 Moto Guzzi V7 III Stone has been priced at an affordable RM66,900 (basic price with GST). However, if you feel like your need for speed needs to be embedded on your motorcycles, there’s also the beautiful 2017 Moto Guzzi V7 III Racer which is priced at RM81,900 (basic price with GST) due to a number of awesome factors. 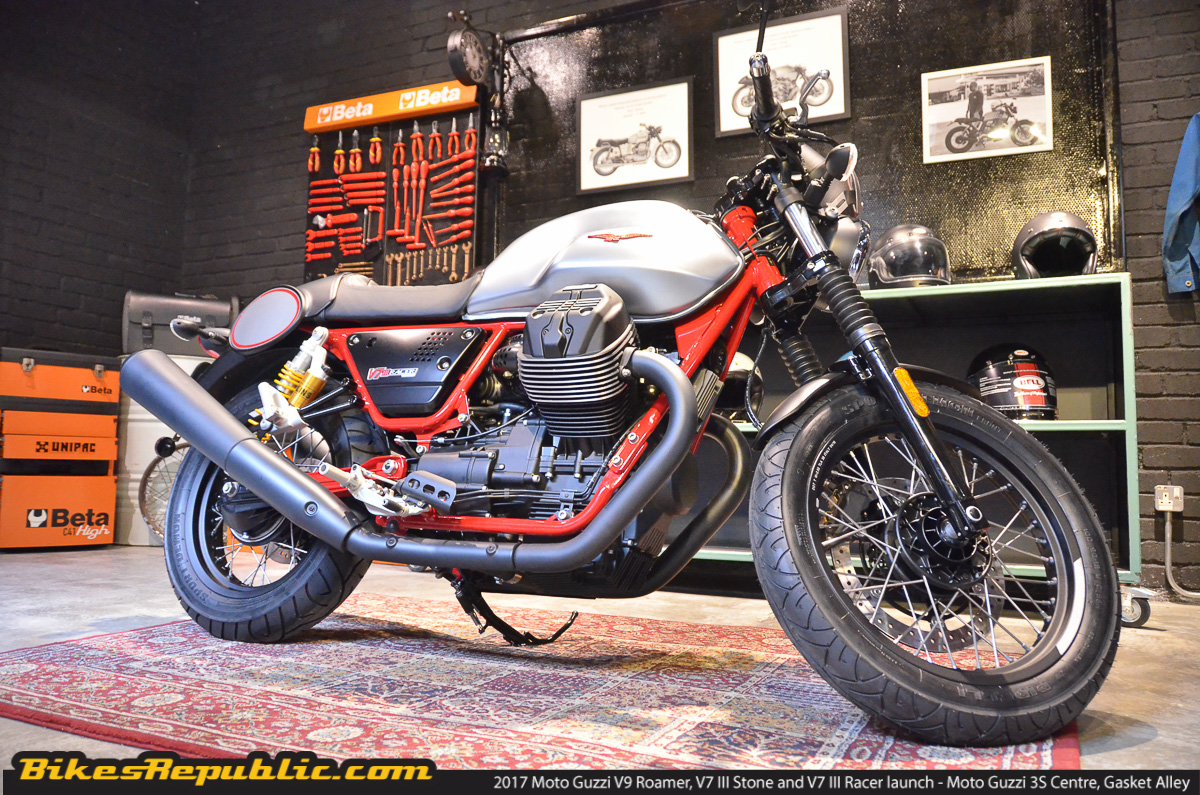 In terms of looks, the Racer is fitted with a satin finished chrome tank with a very distinctive red frame and Moto Guzzi Eagle logo in bright red inspired by the early V7 sport range. Unlike the usual V7 III, the racer is a numbered model which means that it’ll only be produced up to a certain extent. 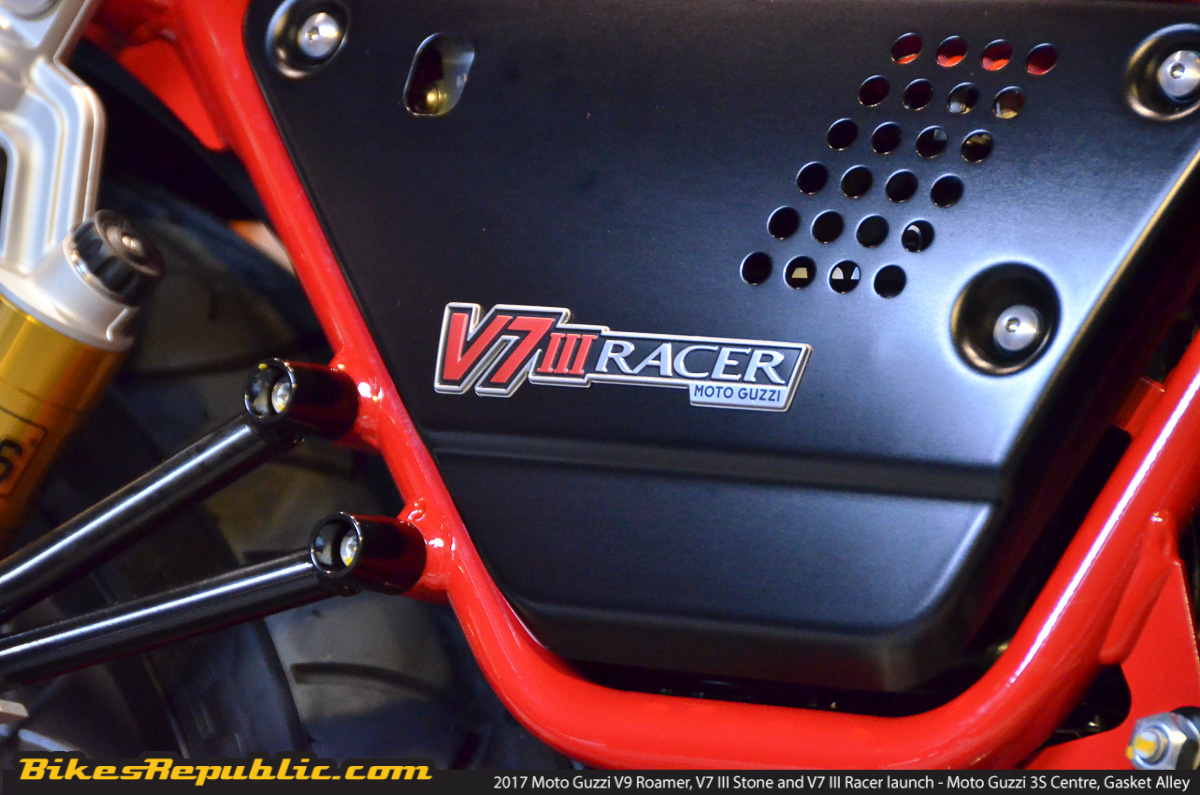 Apart from all the satin chrome finishes throughout the bike (take note of the beautiful piece covering the double clock analogue meter panel), the rear suspension of the Racer is fitted with an adjustable Ohlins goodness to give better riding feel and versatility to rip through corners while tacking mountain roads. 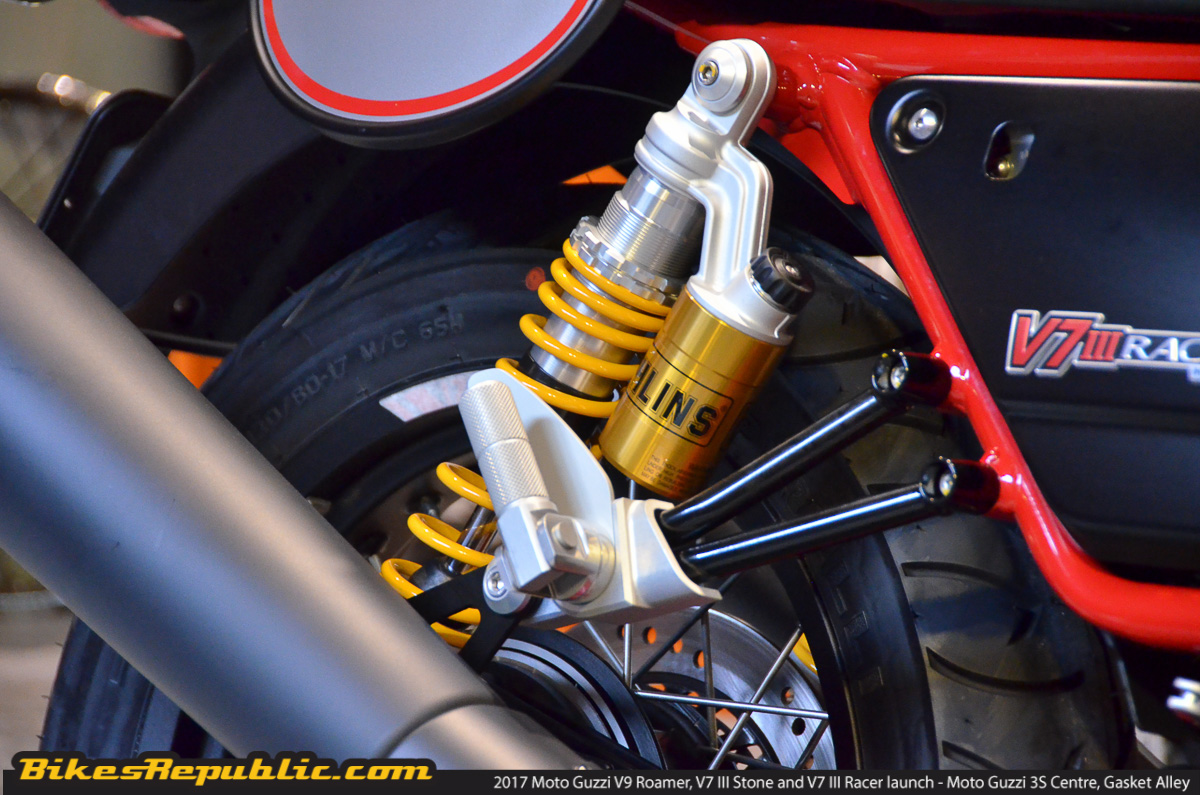 While the V7 III Stone comes with a set of lightweight alloy wheels, the Racer comes with spoked wheels (also available on the V7 III Special and V7 III Anniversario which will be introduced next month during the showroom launch). 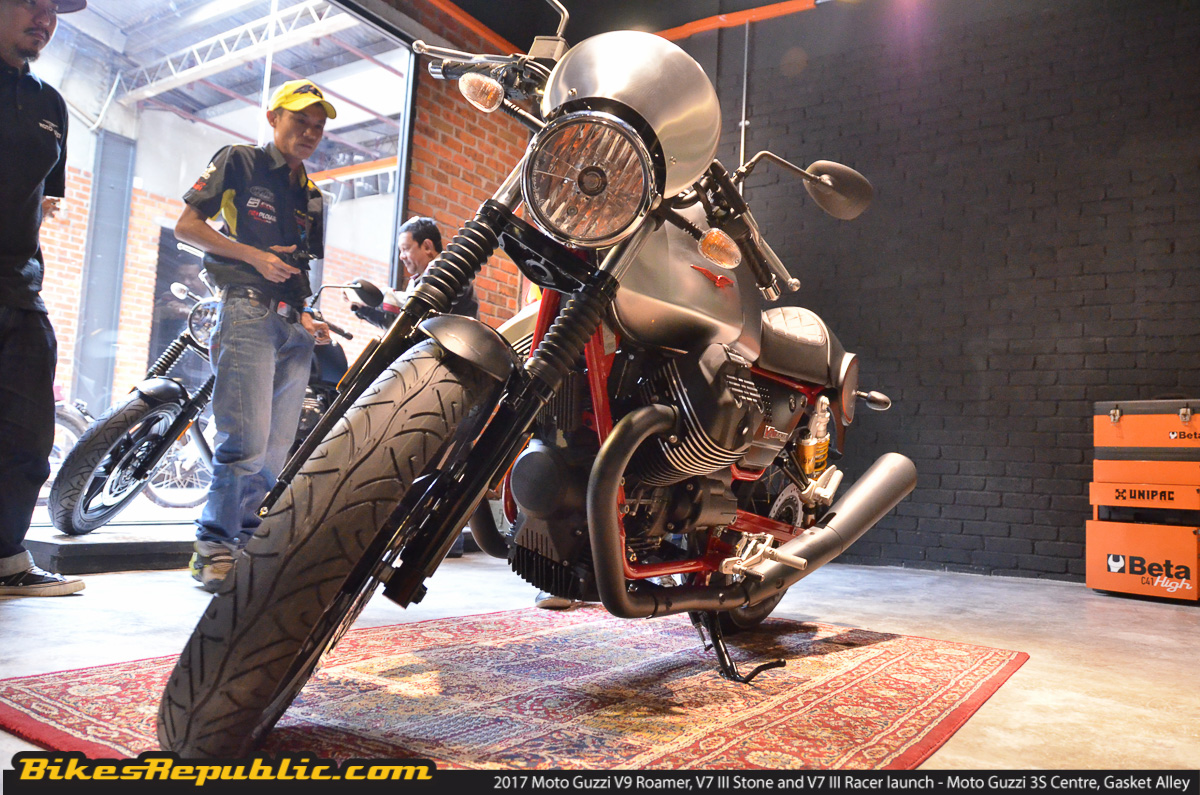 So far, Moto Guzzi Malaysia has only brought out half of what they will be offering and we will be reporting the rest during the official Moto Guzzi 3S Centre launch next month. In the mean time, absorb the beauty of these three babies before they take you over the edge with the V9 Bobber, V7 III Special and V7 III Anniversario. 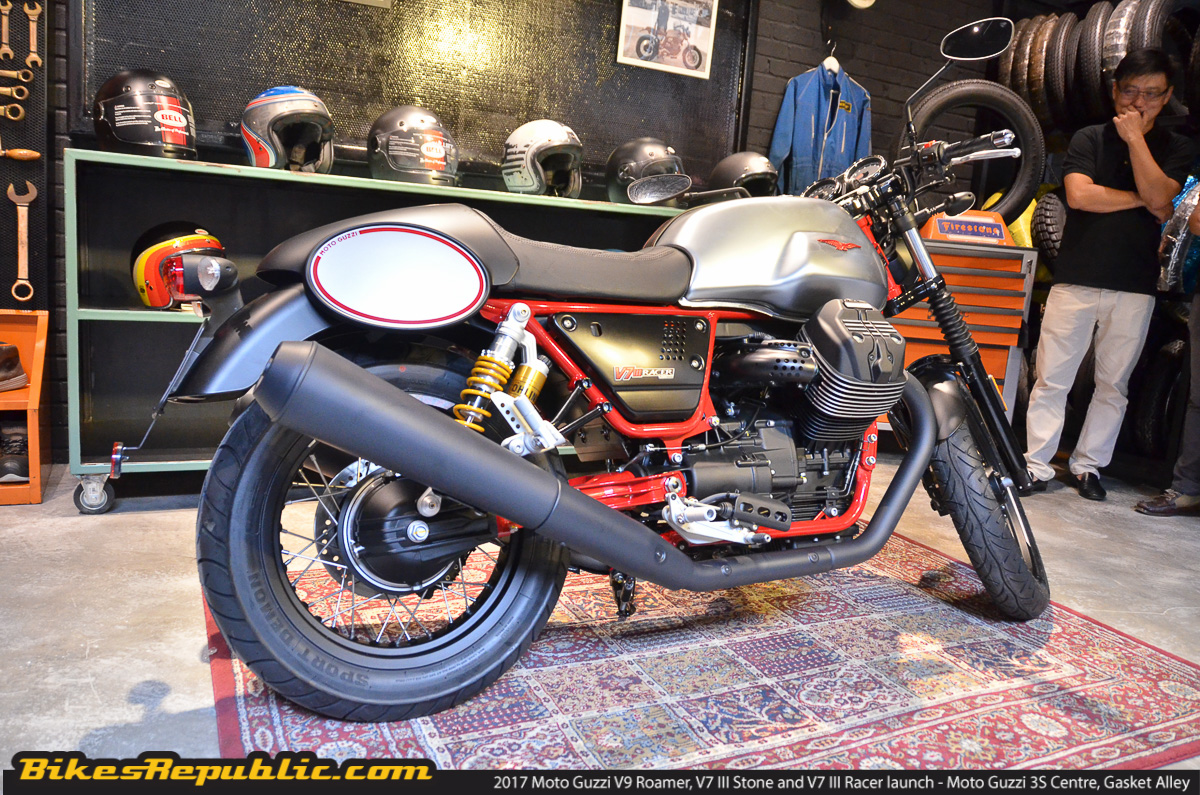