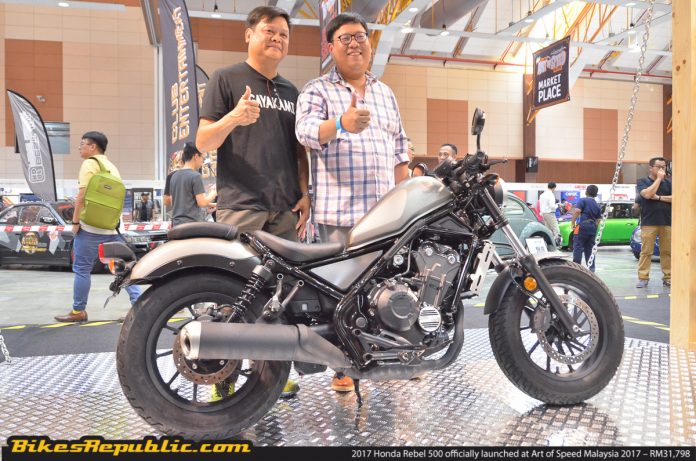 Boon Siew Honda has officially announced that their latest 2017 Honda Rebel 500 will finally be available as part of the ‘lifestyle’ motorcycle range here in Malaysia.

The official announcement was made earlier today in conjunction with the Art of Speed Malaysia 2017 festival held at the Malaysia Agro Exposition Park Serdang (MAEPS). 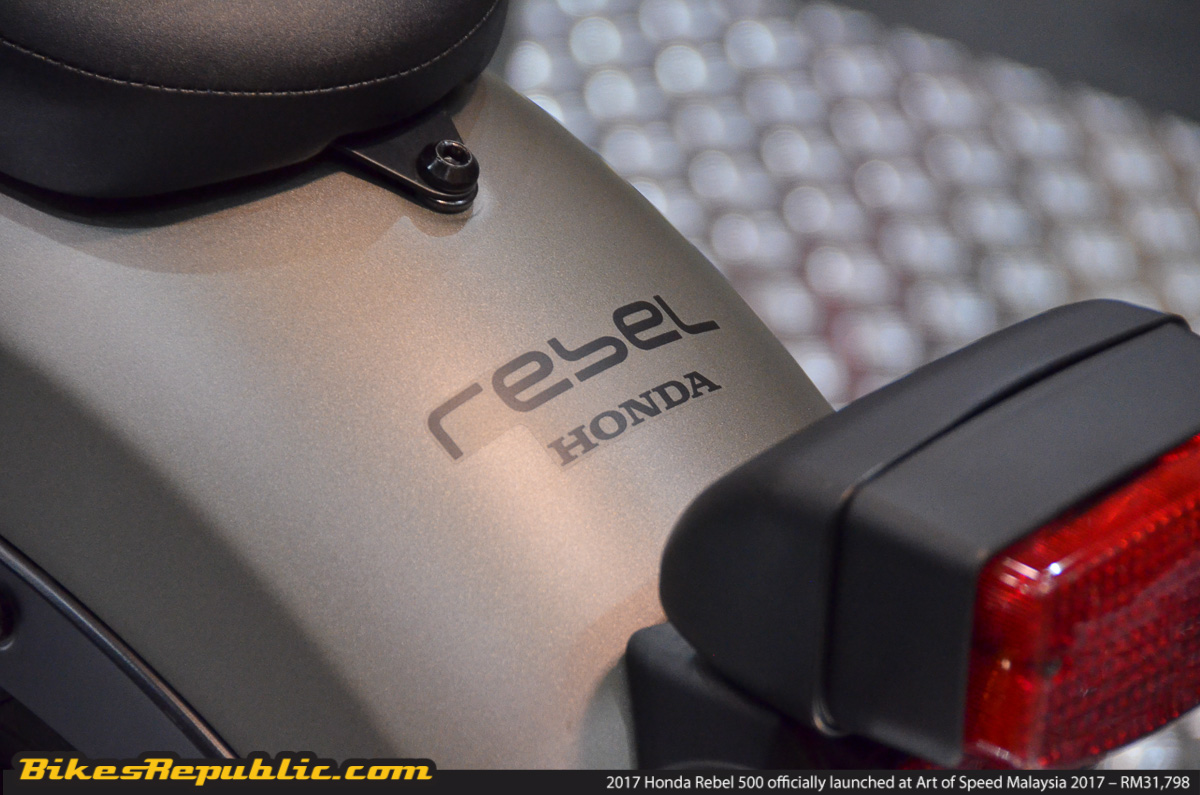 Boon Siew Honda has officially announced that their latest 2017 Honda Rebel 500 will finally be available here in Malaysia. The launch was made official earlier today in conjunction with the 2017 Art of Speed Malaysia festival held at the Malaysia Agro Exposition Park Serdang (MAEPS). 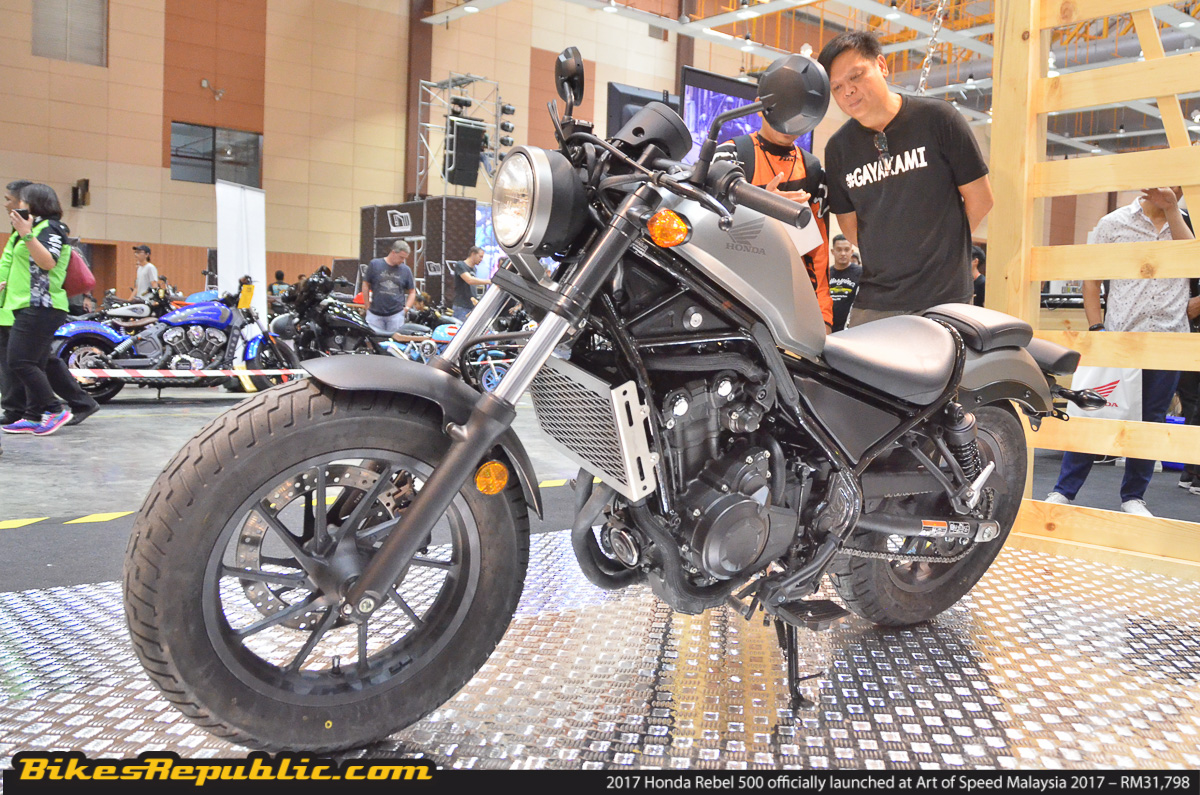 Spearing ahead as Boon Siew Honda’s flagship lifestyle motorcycle range, the latest Honda Rebel 500 represents freedom, style and overall functionality for those looking for something different in the current motorcycle market in the country. The all-new Rebel is Honda’s main weapon in getting the younger crowd to start fuelling their two-wheel passion with the perfect cruiser option at an affordable price. 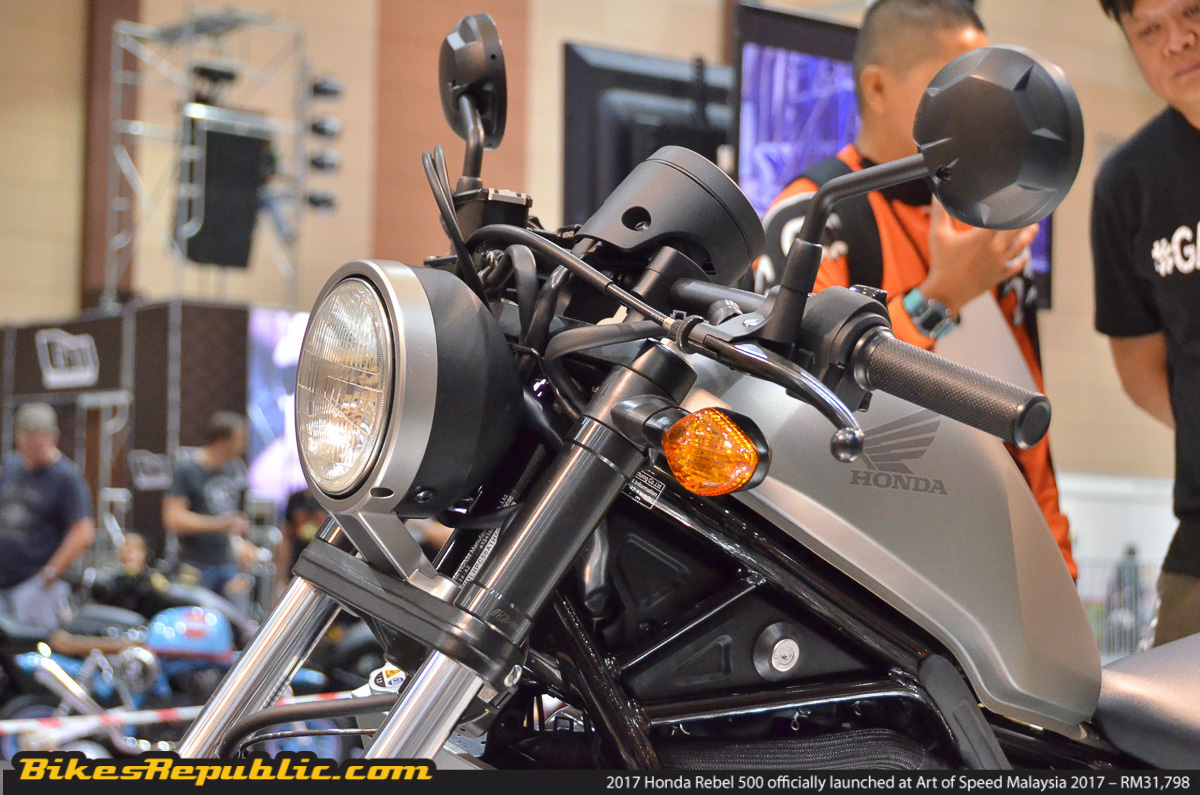 “The long waited Honda Rebel will be available in Malaysia end of August 2017. This model receives overwhelming response from other countries that had launched earlier. Right here, we are showing you the H2C accessories equipped Honda Rebel where it enhances the overall consumer experience.” added by Dato Sri Datuk Wira Tan Hui Jing, Deputy Chairman and Chief Sales Officer of Boon Siew Honda on the Honda booth. 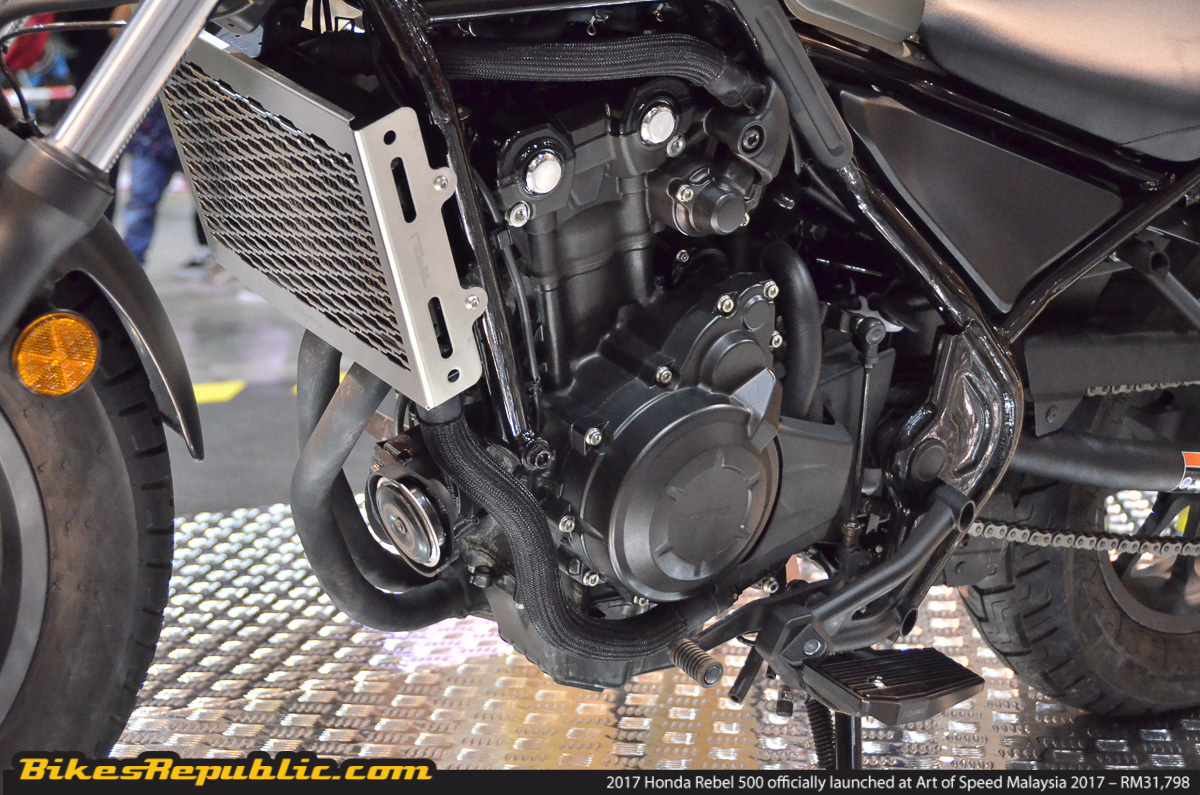 Powered by a steady 471cc, parallel twin-cylinder engine, the Rebel punches out 45.6hp at 8,500rpm and 43.2Nm of torque at 7,000rpm which is around the same range as its sportier cousin, the Honda CBR500R. This makes it a very suitable option for those looking for their first middleweight cruiser with adequate power that won’t burn a gigantic hole in their wallets. 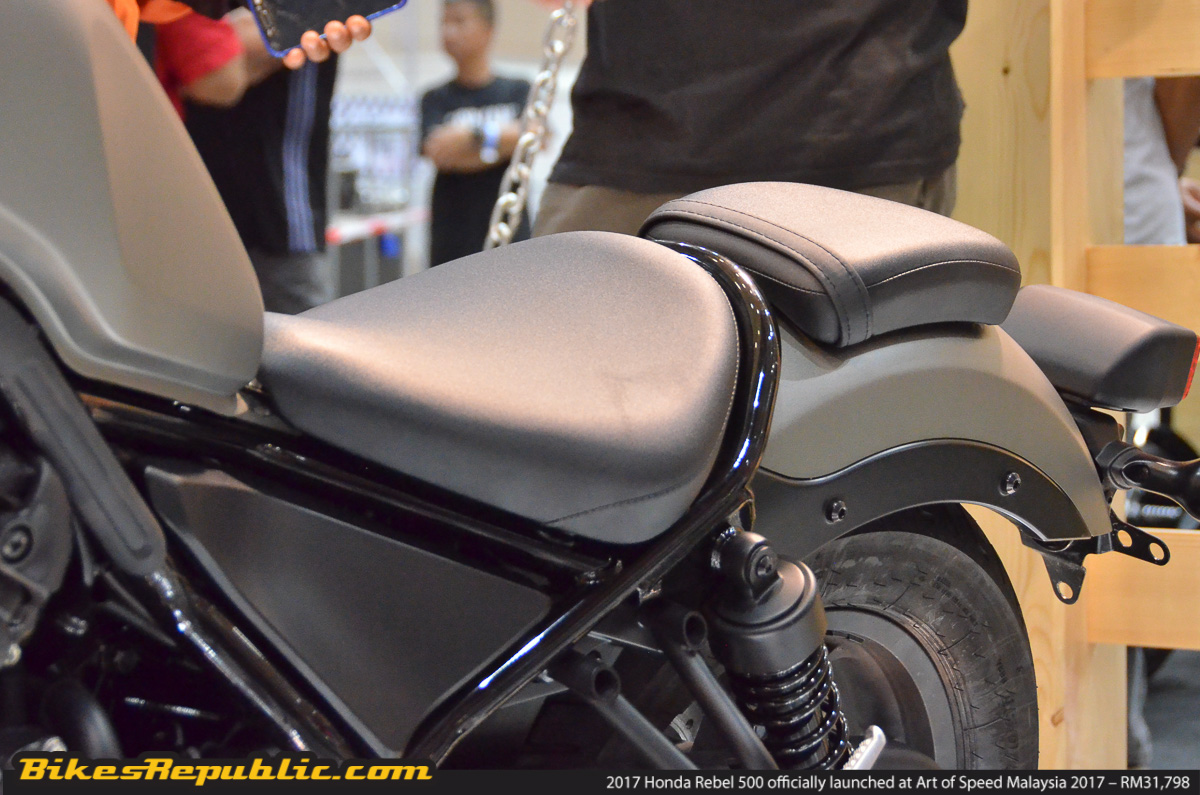 All that power is transferred down to the rear wheel via a six-speed manual transmission with a final chain drive for maximum yet efficient power delivery. All these power and torque figures are wrapped around in a very stylish cruiser that some might even call a “Bobber” which is fast becoming a trend setter in the motorcycle industry for 2017. 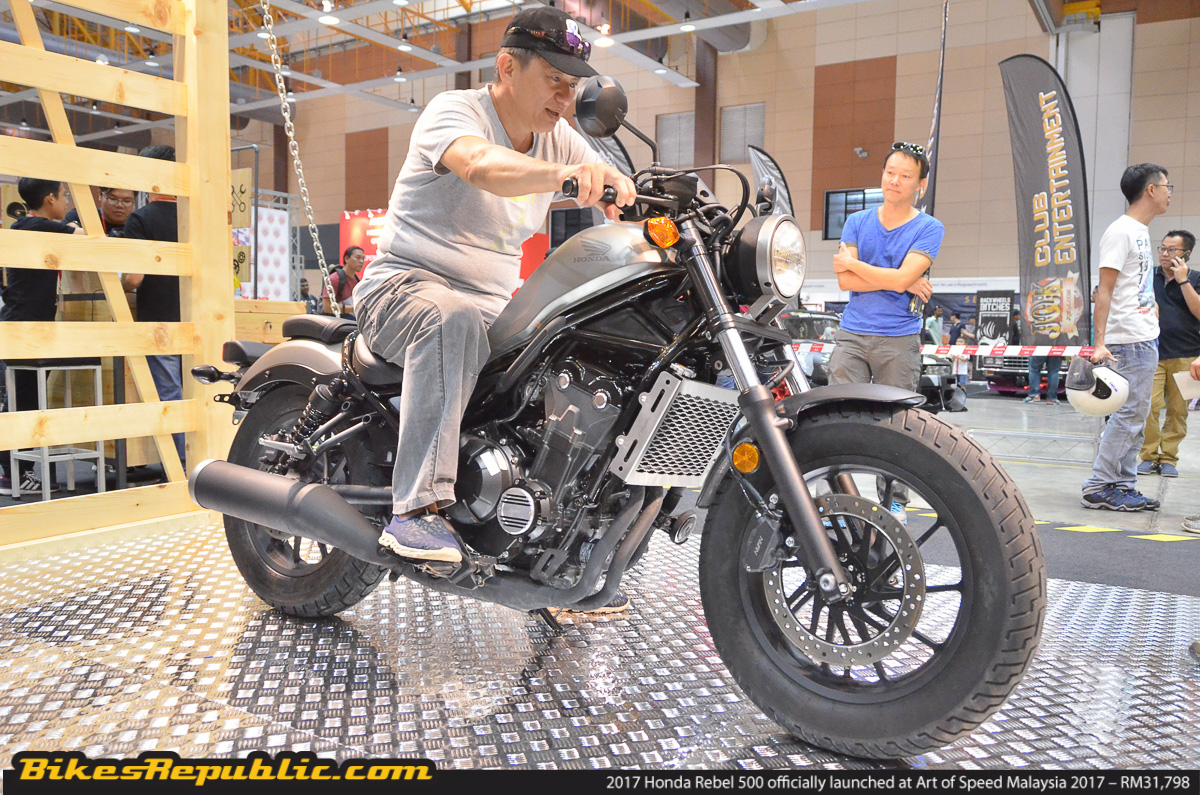 We’ve tested the Rebel 500 before during a special media test ride session a couple of months ago at the Sepang International Circuit (SIC) and based on reliable sources, we can confirm that the all-new 2017 Honda Rebel 500 will be available in August. 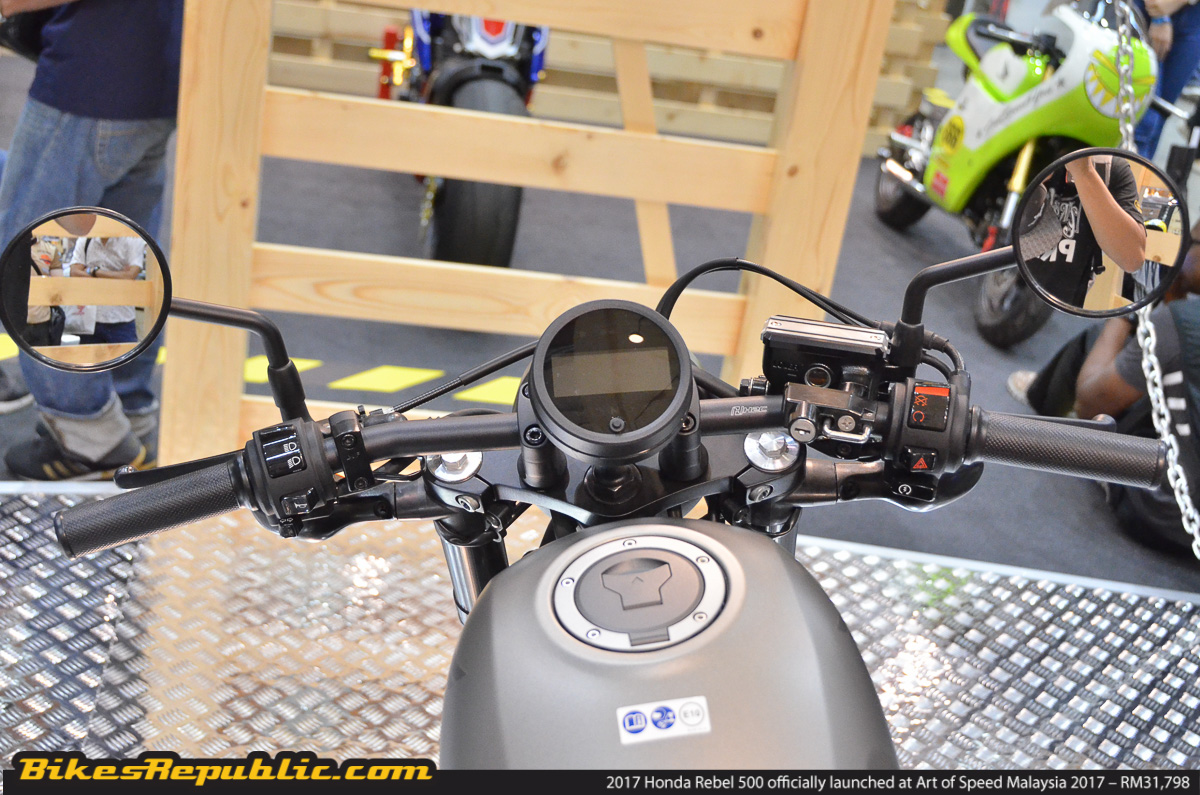 While we previously guessed that the Rebel 500 will be priced at around the RM35,000 mark, Boon Siew Honda gave everyone a very pleasant surprise when they announced that the final pricing is only RM31,798.94 (basic price with GST). That price pays for a very stylish cruiser or “Bobber” with dual-channel ABS system thrown into the package.

Not bad, Boon Siew Honda. Not bad at all.