Aaah… where would motorcycling be if manufacturers don’t push for the title of the world’s fastest production motorcycle, eh?

Bikes have gotten amazingly fast but it all started from somewhere. While we say that there’s no point of building faster and faster motorcycles, manufacturers want to have the fastest bike to show off their engineering capabilities. The bigger horsepower looks good on brochures, too. So much so that consumers have taken to comparing bikes by how much power a bike has over the other.

But anyhow, before we begin the countdown proper, let’s talk about the so-called gentlemen’s agreement.

It was the Honda CBR1000XX Super Blackbird which started the top speed war when it came out in 1996. Yes, other bikes were also “the fastest” but the Super Blackbird was designed specifically for speed, rather than attaining high a top speed as a by-product of power.

Suzuki had been sitting on the sidelines watching Honda and Kawasaki duke it out. Then in 1999, they jumped everyone with the GSX-1300R Hayabusa. With a monster 173 hp engine, the ‘Busa was clocked at 212 km/h.

Kawasaki predictably fought back and their next generation speedster, the Ninja ZX-12R, was reputed to break the ‘Busa’s record.

By now, European regulators were worried about public safety and that upcoming hyperbikes may influence illegal races at straighter speeds. So, they threatened to ban sportbike imports into the EU if something wasn’t done.

The prospect of not selling in Europe was too scary to bear, so European and Japanese manufacturers sat down and agreed to cap the top speeds of future production bikes to 300 km/h beginning year 2000.

The Ninja ZX-12R was thus limited by this agreement and had a 4 km/h slower top speed.

It is also why all new bikes, no matter how powerful, or how they were designed to cut through the air, could only list their top speeds as 299 to 300 km/h.

Except for two bikes, as we’ll see later.

The exclusion of certain bikes

This list will also exclude certain famous bikes, for example, the 1972 Kawasaki Z1. The bike was certainly fast, but it was the fastest bike of its era, instead of being the fastest outright.

Hey, why include such an antiquity? Well, it’s a great way to see how far we’ve come.

The bike had a 964cc water-cool flat-twin (hence the name). Launched in 1912, it had a 2-speed transmission and foot clutch. It sold for only £82. 1913 saw an air-cooled engine and 1914 saw the addition of a kickstarter. Production then continued with a 980cc version after WWI but only 20 were built as the founder Billy Williamson succumbed to a heart attack.

As you an see, 1000cc and V-Twin engines are not new. But it turned the Model L produced by the Pope Manufacturing Company into the world’s fastest production motorcycle.

The bike featured many new technologies that have become the staple of modern motorcycles, such as chain final drive, overhead valves, multi-speed transmission, and Bosch magneto.

These new tech pushed the bike to 110 km/h (70 mph). That’s a great feat considering that motorcycle frames, wheels and tyres of the time were developed from bicycles.

It’s been a mere two years since the Pope Model L.

Production of the Cyclone V-Twin began in 1912, but it was the 1916 model which broke records and became a legend.

The Joerns Motor Manufacturing Company gave the Cyclone a 996cc, 45-degree, SOHC V-Twin which produced 45 hp, compared to the Pope’s 12. The cams were driven by bevel gears instead of pushrods and the cylinders had hemispherical combustion chambers (like the later “Hemi” muscle cars).

Although official records stated that the bike reached 137 km/h, there were accounts of racing Cyclones that hit 185 km/h. At least.

If you think that’s not peanuts, sit on a classic Raleigh bicycle and have your buddy ride a motorcycle and push you to just the official 137 km/h top speed.

This is why the Cyclone V-Twin was the most expensive motorcycle ever auctioned at USD 852,000.

The Cyclone V-Twin held the record for 9 years until the advent of the SS100.

Listed as a 100 mph (160 km/h) model, the company also unveiled the Brough Superior SS100 Pendine in the same year (see below).

it was developed further for competition and ended with holding seven world records. Founder George Brough himself rode the bike to 210.2 km/h in 1928, breaking his previous record.

But perhaps the Brough Superior SS100 became better known due to the movie “Lawrence of Arabia.”

Enter Vincent. The Brough Superior SS100 Pendine would hold the record for 22 years.

Rollie Free would take the bike to 241.905 km/h during a record-breaking run at the Bonneville Salt Flats. The picture of him lying prone on the bike (Superman style) while clad in nothing but his swim cap, swim trunks and sandals had become as legendary as the bike itself.

Free would actually record an even faster 251.99 km/h during later trials but he crashed during the actual run.

Vincent-HRD produced the most advanced motorcycles of their time but many of those technologies would find their way into modern motorcycles. Among them are the technique of using the engine as a stressed member of the frame, and the cantilevered rear monoshock.

The Black Lightning is the most sought-after Vincent and fetches hefty prices at auctions.

Could you believe that the Vincent Black held the record for 35 years?!

The bike to break it was the GPZ900R Ninja. Yes, the “Top Gun” bike. It was also the first Kawasaki to use the “Ninja” name.

The Ninja became the precursor to modern sportbikes. It’s the first to incorporate a 16-valve, DOHC, liquid-cooled, inline-Four engine. The 908cc engine produced 115 hp and pushed the bike to over 243 km/h, making it the first production bike to surpass 240 km/h.

A slightly modified bike hit 262 km/h, and blasted through the quarter mile at 10.976 seconds.

So successful was the bike that Kawasaki continued producing it for the Japanese market until 2004, although worldwide production ended in 1996.

Also called the Tomcat in certain countries (as an homage to Top Gun?), it continues Kawasaki’s brief of producing the most powerful and fastest sportbikes.

Building off the GPZ1000RX (which evolved from the GPZ900R), the ZX-10 had lighter pistons and higher compression ratio. But the real groundbreaker for Kawasaki was the aluminium perimeter frame.

Bimota took the engine from the Yamaha FZR1000 EXUP (hence the “Y” in front of “B”) and fettled it to produce 147 hp. The maker also removed as much as 23 kg from the donor bike and added all the high end stuff, besides a much better chassis.

You knew Kawasaki had to return the favour. So in 1990, they unleashed the Ninja ZZ-R1100.

Capacity was upped to 1052cc, which also increased power to 145 hp, and the fairing was made to be more aerodynamic. It was also the first production bike to feature ram air intake to boost top end horsepower.

After years of watching Kawasaki dominate since the GPZ900R in 1984, Honda had to act.

The answer was the CBR1100XX Super Blackbird, the name an homage to the Lockheed SR-71 reconnaissance aircraft which could hit Mach 3.8 (4691 km/h).

Honda didn’t just produce a bike with “slippery” aerodynamics, however. The bike featured plenty of new developments such as PGM FI fuel injection. 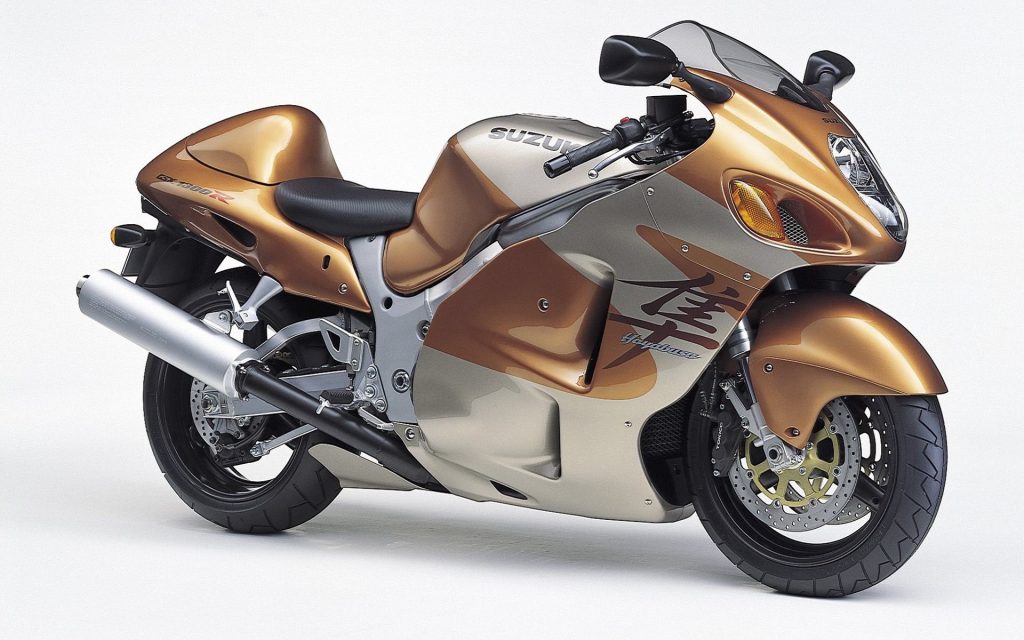 Here we are. The Hayabusa. Featuring a bodywork designed in the windtunnel, its sole purpose was to break the 300 km/h mark the first time for a production motorcycle.

As we wrote in the beginning, regulators had decided to step in by now, consequently leading to the gentlemen’s agreement. That left the Hayabusa as the fastest ever production motorcycle.

The Panigale R is actually the homologation model for WorldSBK racing, hence its engine capacity was limited to 1198 cc as per rules for two-cylinder motorcycles.

Even then, it already made 195 hp. Power was increased to 202 hp by using the racing exhaust.

Road & Track magazine tested the bike with the race exhaust and hit 325 km/h. It could’ve gone faster if not for the street gearing!

We reach the H2, finally. The H2 is the road-going version of the competition-only H2R, and both are supercharged.

James Hiller then rode the H2 as a demonstration at the 2017 Isle of Man TT. Equipped with slick tyres, the bike hit 332 km/h. It was the fastest speed ever recorded at the TT. 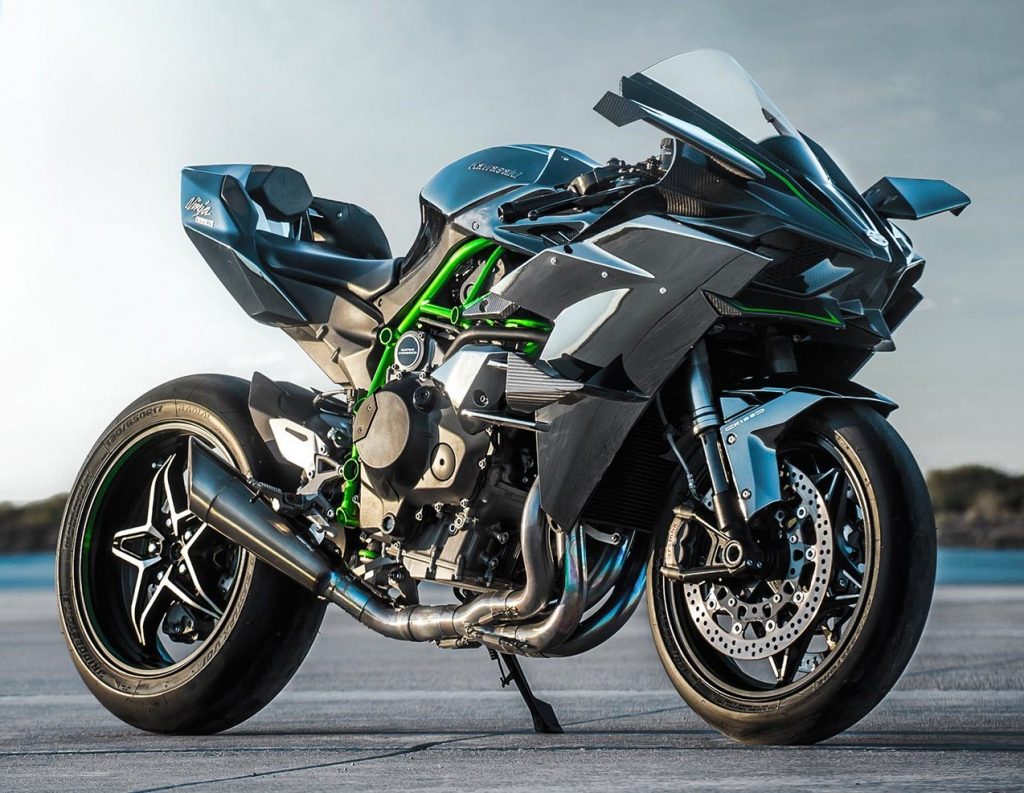 But supersport racer Kenan Sofuoglu decided to do better. Using a stock H2R, it was fitted with specially-developed Pirelli slick tyres and the tank filled with race gasoline.

He charged down the Osman Gazi bridge in Turkey (the fourth longest in the world at 2.41 km), Sofuoglu managed 380 km/h during a trial run. After four months of preparation, he attempted the run in earnest and hit 400 km/h.