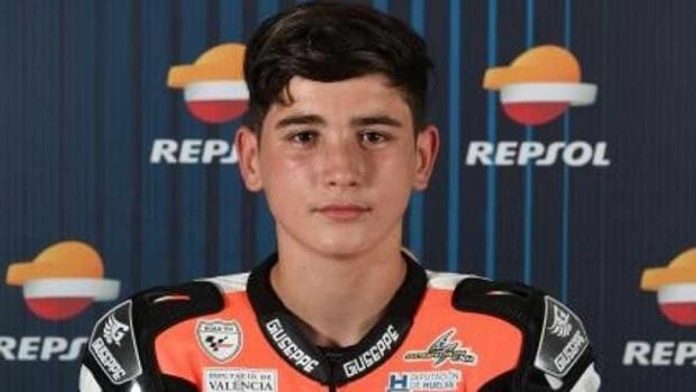 It was a sad weekend for the world of FIM CEV Repsol racing as the young and super talented Hugo Millan lost his life after a horrific crash.

Millan, who would have turned 15 this November hails from Spain and races for Team Cuna De Campeones on a Honda machine.

The young racer had been enjoying a fantastic season in 2021 with two pole positions and four podium finishes.

Millan began the weekend’s race from second place on the grid but unfortunately took a tumble on the second lap of the European Talent Cup race at the Motorland Aragon Circuit.

Sadly he was struck head on as he tried to get up and move out of the way.

He was treated at the on site medical centre and later flown out by helicopter to a nearby hospital where he succumbed to his injuries.

The organisers of the race have received the following statement:

Following a serious incident in European Talent Cup Race One at the MotorLand Aragón Round of the FIM CEV Repsol, it is with great sadness that we report the passing of rider Hugo Millán.

Millán was involved in a multi-rider incident at Turn 5, with the session immediately red flagged. The Medical Intervention Vehicles arrived at the site immediately and the rider was attended to on track before being transferred to the Medical Centre at the Circuit.

Despite the best efforts of the circuit medical staff, the Medical Centre has announced that Millán has sadly succumbed to his injuries.

Millán was enjoying his most successful season so far in the FIM CEV Repsol, claiming several podiums to demonstrate his consistency as he competed at the front of the class.

The FIM, FIM Europe, Dorna and MotorLand Aragón Circuit pass on our deepest condolences to Millán’s family, friends, team and loved ones.