Our friends at KTM Malaysia CKD recently extended an exclusive invite to us, and our colleagues in our sister site MotoMalaya.net last weekend to join in on the firm’s specially organised ride to Port Dickson, Negeri Sembilan. The ride, which took place on Saturday, was organised especially by the Austrian brand’s Kedah-based local assembly arm, in partnership with the KTM CKD Owners Club as well.

The Saturday ride saw up to 120 bikes taking part, with the bulk of it comprised mostly of the Austrian brand’s two most popular CKD models – the Duke and RC series. KTM Malaysia CKD has hosted plenty of group rides over the last few years, this latest one to Port Dickson being its third for this year. This ride also saw the entry of several other clubs, namely the KTM Dukers and its various chapters hailing from all corners of the peninsula.

According to KTM Malaysia CKD’s customer care unit representative and KTM CKD Owners Club head Nurul Fazura Binti Ahmad, the firm has organised these special activities as part of its lifestyle experience offer for its customers. Interestingly, this ride to Port Dickson was also the first time the firm’s new RC200 and RC390 models and their owners turned up in high numbers, equalling its presence with their Duke 200 and Duke 390 counterparts.

The ride to Port Dickson was flagged off early on Saturday morning in its starting point, which is the newly-opened KTM Malaysia CKD Kota Damansara Lifestyle Showroom.

Ensuring the safety of all its participants, KTM Malaysia CKD deployed a high number of its staff for the ride as ride marshals plus one support truck to provide participants with the necessary assistance. And, despite not being able to secure an official police escort detail in time, the orange brand’s staff were prompt and efficient at managing the group through traffic and highways safely and efficiently, constantly reminding participants to be as safe as possible.

Also deserving credits here were the owners and club members themselves who showed a very safe and disciplined approach with this ride. This was made very clear when part of the group (us included!) found ourselves bogged down by heavy rains on the return trip back to Kuala Lumpur. And, despite their high numbers, we are glad to report that this was one incident-free massive group ride – something most other groups should exemplify.

As the ride concluded, KTM Malaysia CKD’s Fazura also shared with us that the firm has planned a few more group rides for the coming months. These include a charity ride up into the East Coast that is scheduled for early next month. More information on KTM Malaysia CKD’s upcoming activities can be obtained by following the firm’s official Facebook page.

Check out our extensive photo gallery below of the ride. Alternatively, you can also view them, as well as several more exclusive snaps on the official BikesRepublic.com Facebook page as well. 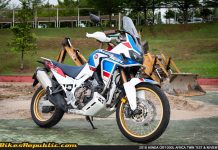