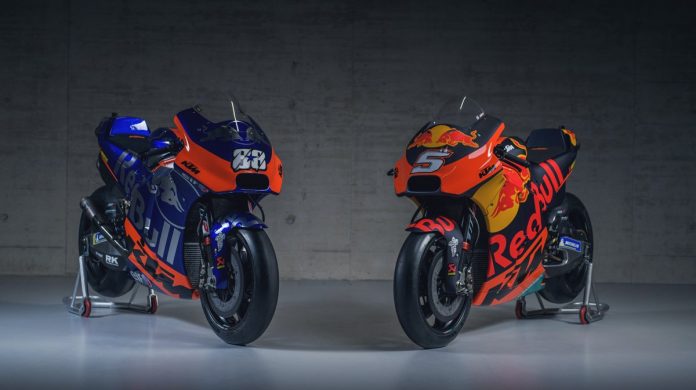 In one corner is the Red Bull KTM Factory Racing team, with Pol Espargaro and Johann Zarco as riders. This team’s KTM RC16 uses the traditional Red Bull KTM livery.

In the other corner is the Red Bull KTM Tech 3 Racing team, with our boy Hafizh Syahrin and Miguel Oliveira as riders. Their KTM RC16 are finished in a new orange, blue and silver livery. Hafizh promised during the special press conference and meet the fans session during the Sepang Winter Test, that the new livery will be replicated on a special edition KTM RC390 in Malaysia.

Both teams will contest on the factory KTM RC16, as the manufacturer is eager to collect twice the data in half the time in developing the bike. Although it still needs much development as Zarco said, Europe’s largest motorcycle maker could not shake their excitement.

After all, KTM’s morale and determination took a huge boost when Pol Espargaro put the bike on the podium for the first time last season in Valencia. Meanwhile, the retention of veteran KTM test rider Mika Kallio and signing of Dani Pedrosa as the new test rider will keep the program rolling at a high pace. Unfortunately, Pedrosa broke his collarbone and is out for three more months. However, KTM are allowed concessions for testing and development under MotoGP rules. Making full use of this leeway, KTM brought out several engines with different specs at Sepang.

The new bikes will hit the track from 20th February. Until then, let’s just enjoy the photos of the RC16 from both camps. All photos are from KTM and published in MotoGP.com.