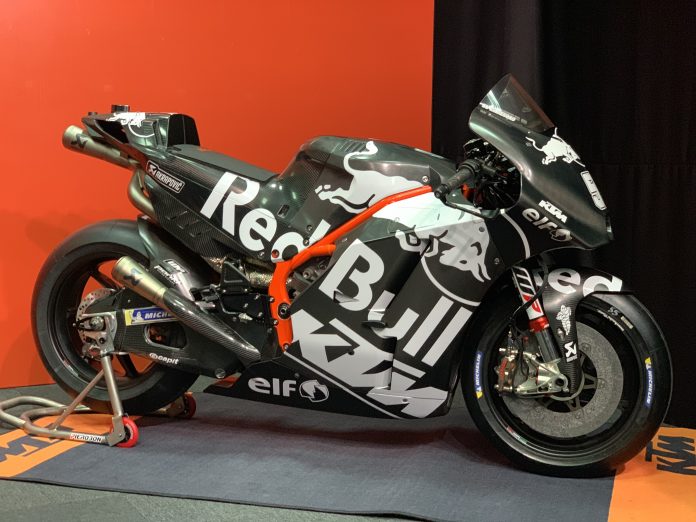 You must have noticed the KTM RC16 which Hafizh Syahrin posed on during yesterday’s press conference. Yes, it’s the bike he’ll be riding in the MotoGP 2019 season.

We’ve seen almost all the MotoGP bikes up close before and have grown used to them. However, there are a number of intriguing details on the KTM RC16 that aren’t found on other MotoGP bikes. 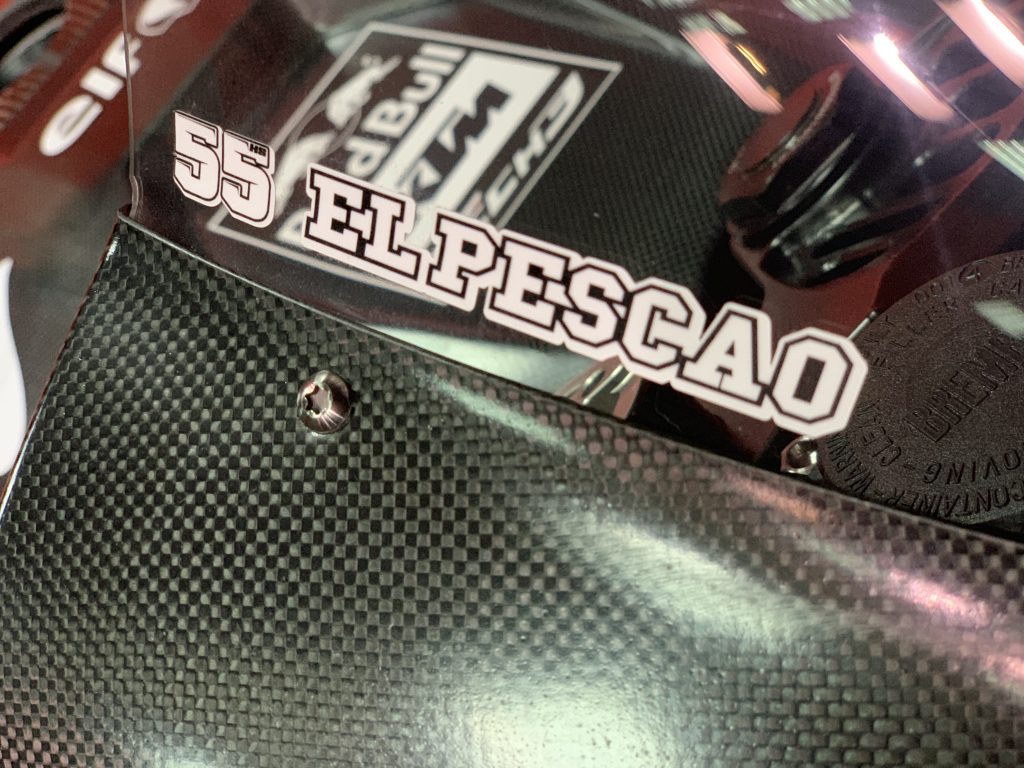 Virtually all bikes (Moto2 and Moto3 included) in the paddock run Öhlins suspension. WP Suspension is a Dutch company set up in 1978, but it currently fully-owned by KTM. That’s why all on-road and off-road production KTMs wear WP suspension. 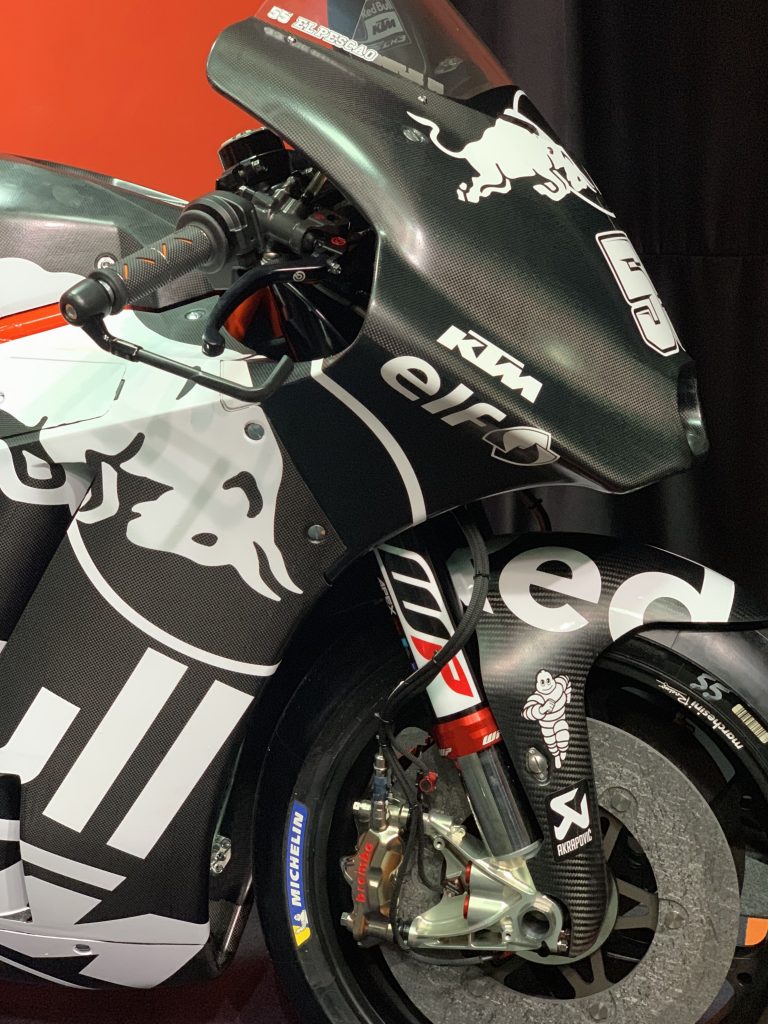 The use of the suspension brand also extends to KTM’s factory race teams in Moto2 and Moto3, so it’s natural to use them in MotoGP.

Hafizh said during the press conference that he needs to adapt to the new suspension. That’s because he had been riding bikes with Öhlins for a long time.

Look at the size of that thing!

One of our BikesRepublic.com Instagram follower observed, “Whoa! Look at the size of those front brake discs!” 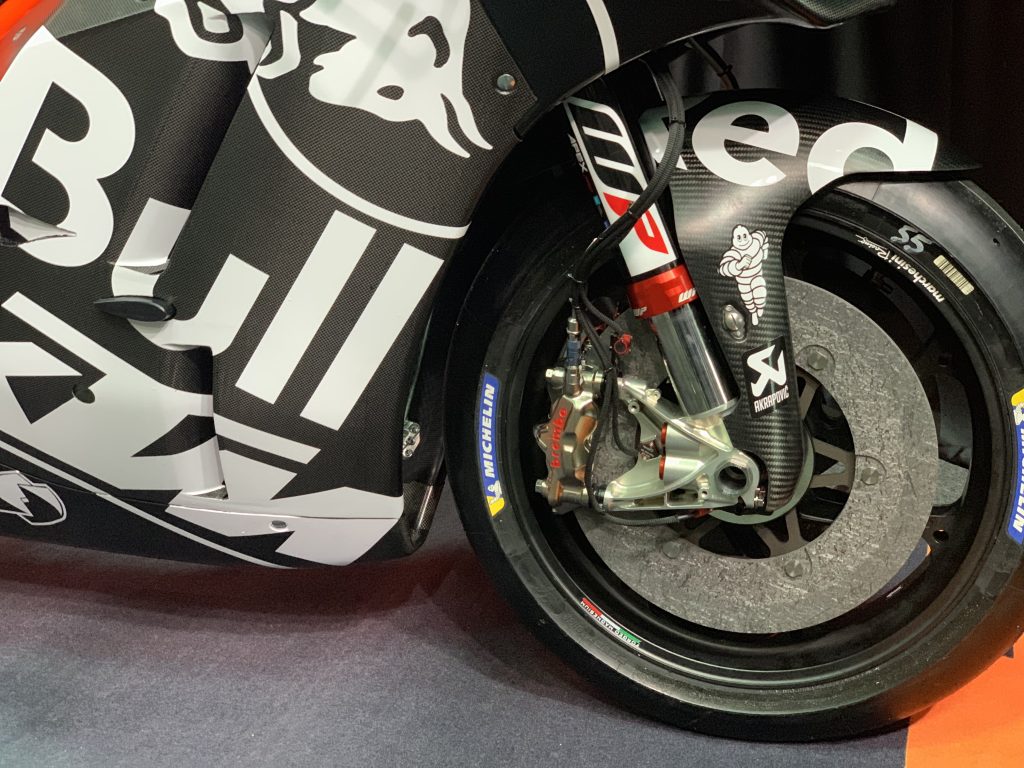 He’s right, those are the 340mm carbon discs. They are only used at a small number of racetracks on the MotoGP calendar, such as Motegi. Motegi is called a “stop-start track” where long straights precede super-hard braking zones before corners.

Increasing the size of the discs isn’t about extra braking power. That’s because the standard 320mm discs already generate enough power for the riders to lift the rear wheels off the ground.

Instead, the increased diameter is for cooling purposes, so that the discs don’t overheat.

Talk about an evolution. When carbon brakes first appeared on the grid many years ago, riders had to drag their brakes at the beginning of the race to build up and retain heat in the discs. Now, they can even overheat!

All KTM road bikes utilize the steel trellis frame, so KTM decided to use what they know best in the RC16, too. In fact, KTM’s Moto2 and Moto3 bikes use the trellis layout, as well. 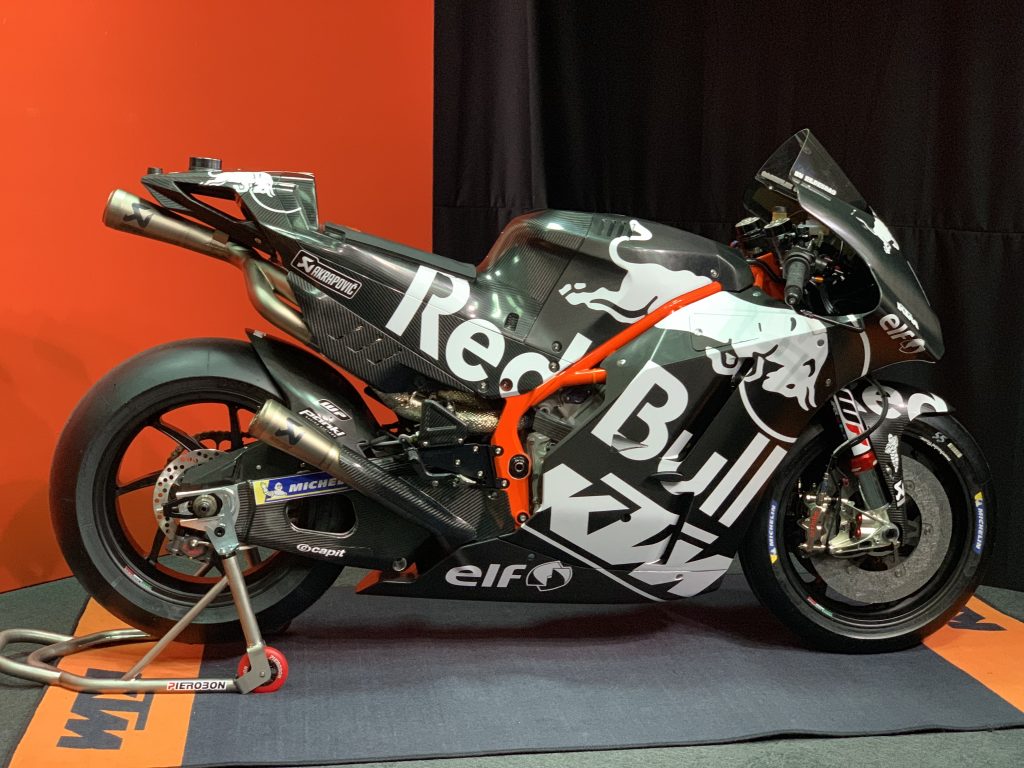 You can see the orange-coloured frame’s top truss just jutting out from above the fairing, besides the downtubes which anchor the swingarm.

Everything else then bolts to this frame. The seat and tail unit not only includes the rider, but also most of the fuel tank. Yes, MotoGP fuel tanks actually start from just behind the normal fuel tank and extend to underneath the rider’s seat. The front part of the “tank” includes the airbox and electronics.

The exhausts of the RC16 looks familiar to MotoGP observers, of course. Their arrangement is similar, if not identical to those on the Honda RC213V.

The RC16 is also a V-Four. Consequently, the front pair of cylinders vent their gases through a pipe down low, while the rear pair vents through a pipe set high underneath the seat.

The bike’s cockpit is clear of clutter, as it should be. 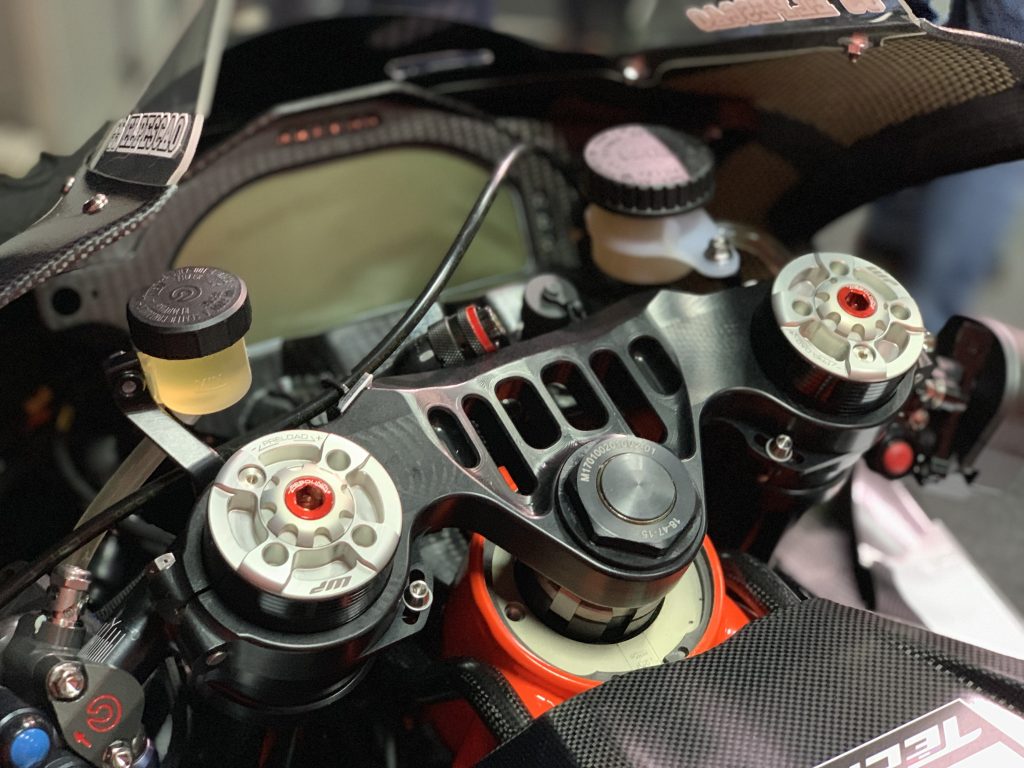 There could be other triple clamps as well with different arrangements to affect the trail or even rake angle of the front end.

The KTM teams are carrying out their shakedown tests for the next three days beginning today at the Sepang International Circuit.