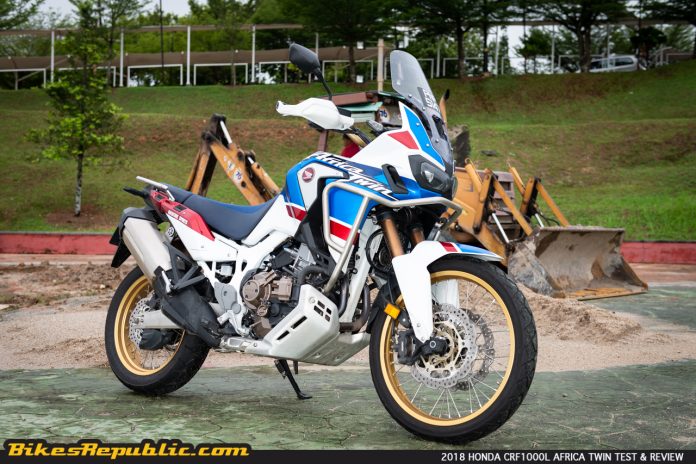 The “Africa Twin” moniker is one of the most celebrated names in motorcycling, so naturally, we were excited when Boon Siew Honda called us to pick up the new Honda CRF1000L Africa Twin.

During the heydays of the Paris-Dakar Rally, the HRC-built NXR-750 tore up the Saharan dunes to four victories. It was no small feat. Being in the late-80s means there was no gimmickry of the modern bikes.

It is powered by a 752cc, four-sparkplug V-Twin (hence its name) and had all the trappings of an adventure bike including twin large headlamps, long-travel suspension, engine bash plate, wire spoked wheels, semi-off-road tyres. In short, it looked like it just got off the rally and straight into the dealerships.

Although the Africa Twin had stiff competition from the BMW R 100 GS, Yamaha Super Tenere, Cagiva Elefant, et al, the big Honda was a success. In fact, production carried on until 2003.

Introduction to the CRF1000L Africa Twin

Many fans and even motojournalists cheered when Honda announced their plans for a new Africa Twin. Heck, the romantics among us got teary-eyed when they recalled their exploits on the AT in the 90’s. 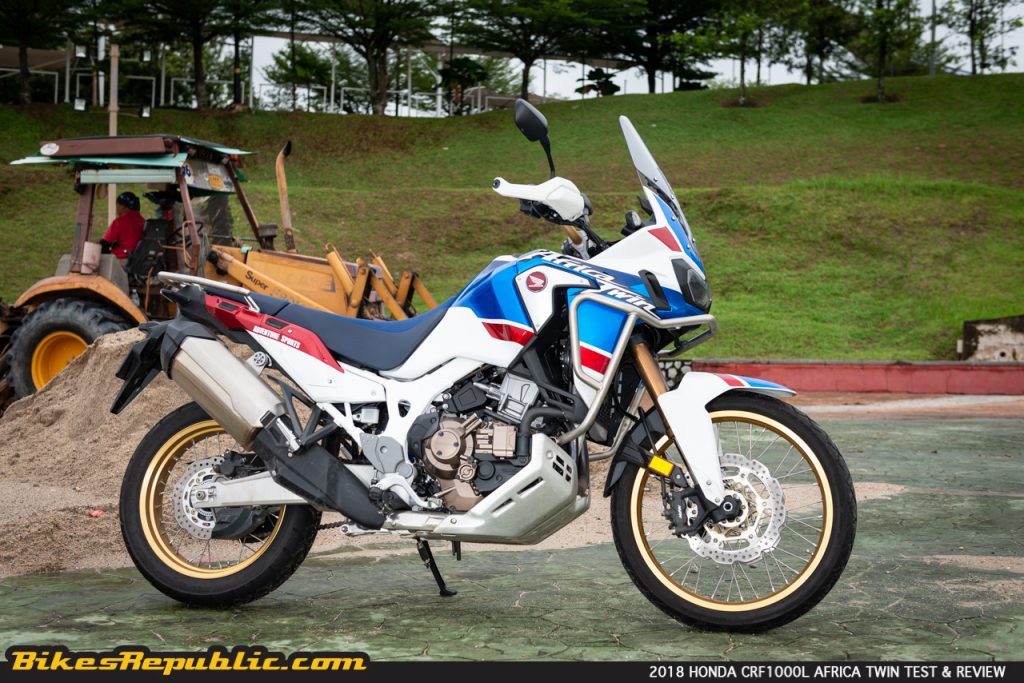 The new bike has a slim and tall front profile. Besides that, the front looks like an extended forehead above the tightly arranged headlamps. It’s the “Dakar styling” where a pace note scroller/GPS sits behind screen.

Moving back, the rear part of the bike from the head onwards invokes the profile of the XRV750. This is especially true when you view the back of the fuel tank and seat. Anyhow, we felt that Honda did a great job of amalgamating design elements of the old bike to the new. 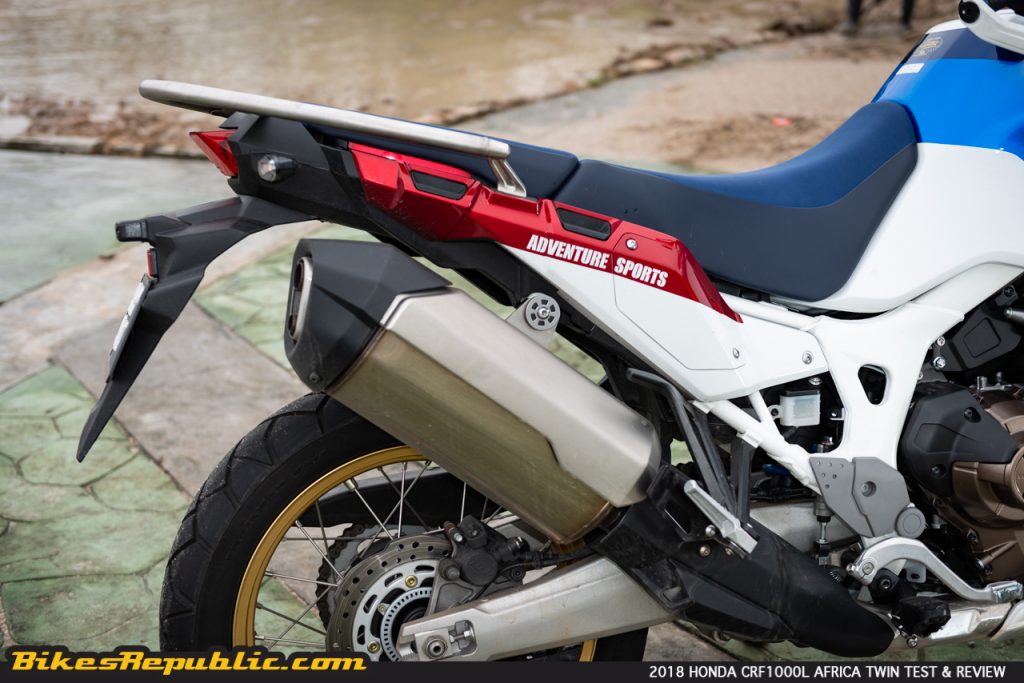 First impression? Oh my! This thing’s tall! We’ve tested plenty of tall dual-sport bikes, mind you. Of course, the Africa Twin isn’t as tall as motocrossers or enduros but it’s definitely the tallest among dual-sport bikes. Someone had adjusted the rear shock’s preload all the out to lower the rear end, but I still had to hang one leg in the air when I stopped.

I knew I should’ve worn my platform shoes. Just kidding. 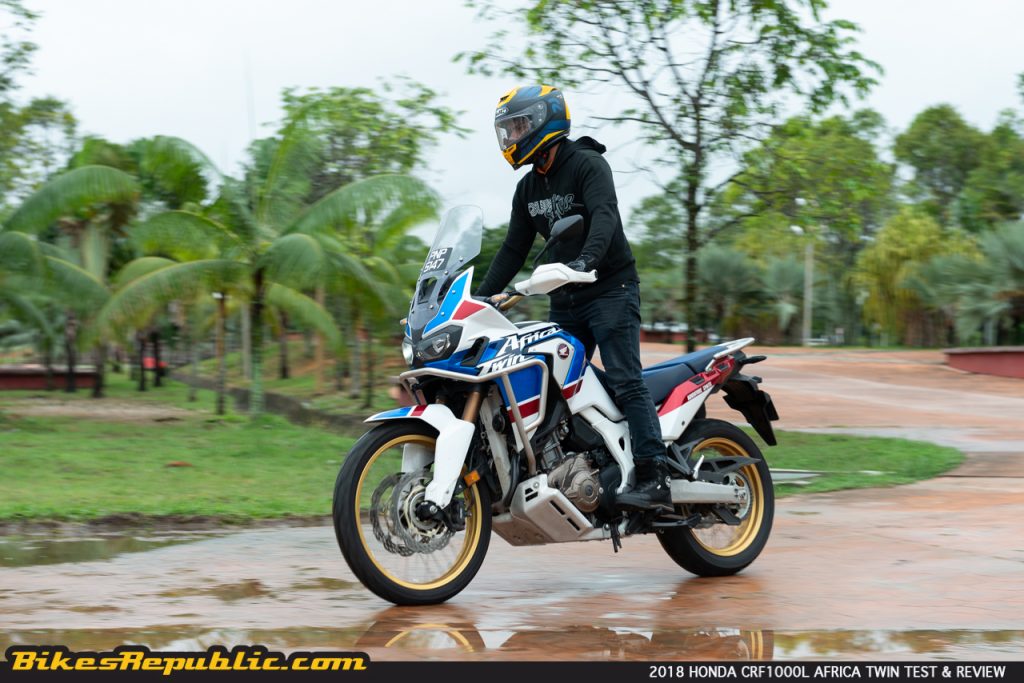 However, traffic lights became my No. 1 enemy (for the moment). That’s because I had to first determine if the road was slanting to the left or right, before shifting my buttock and leg out while coming to a stop. The slim profile helped a lot, but the badly adjusted chassis meant that the handlebar was sitting too high up, making the bike feel like it’s carrying bricks on its fuel tank.

We decided to ride it to Kuantan together with the Honda X-Adv.

The engine’s torque was impressive, keeping the engine rolling at low revs at highway speeds. The 998cc parallel-Twin uses a 270oto mimic the firing order of a 90oV-Twin, so a smooth character was expected. It produces 94 bhp and 98 Nm of torque. 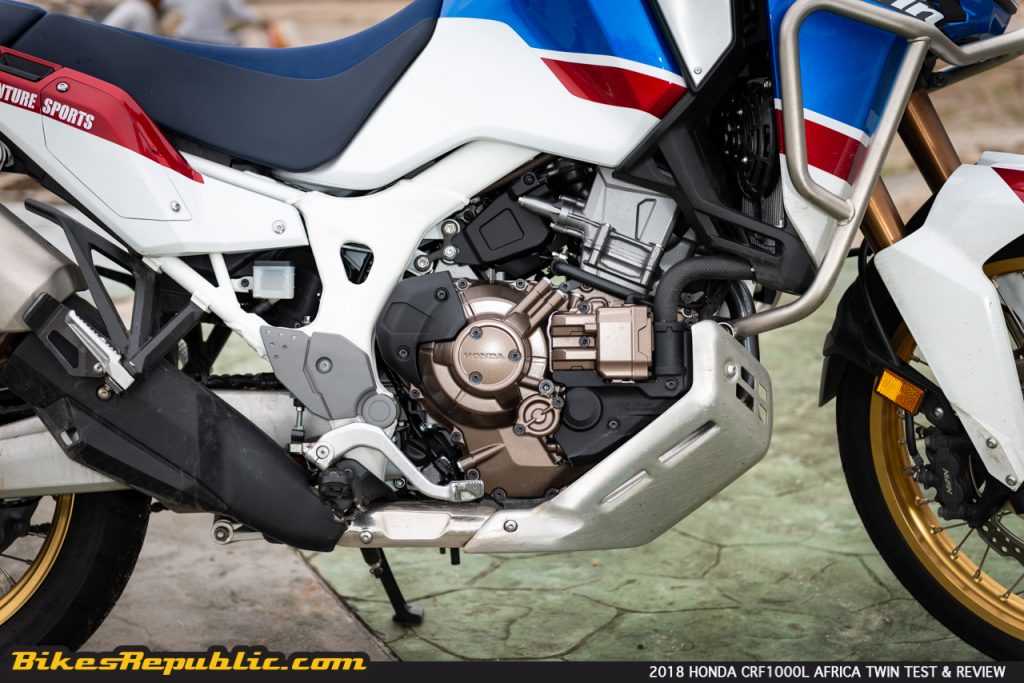 The AT picks up speed quick to the sound of a rumbling engine. Small pops accompanied the DCT upshifts.

But we wished the front end has a little more high-speed stability and the handlebar moved around at higher speeds. We could expect this of dual-sport bikes with high handlebars but the AT’s moved the most. Then again, this bike is biased towards off-roading.

As such, it didn’t like being slammed into corners. You need to brake and release early, coast a bit to let the chassis settle down before turning in. Similarly, you need to be super smooth with the gas during the lean to straight up transition. Being throttle happy will send the handlebar waggling back and forth. 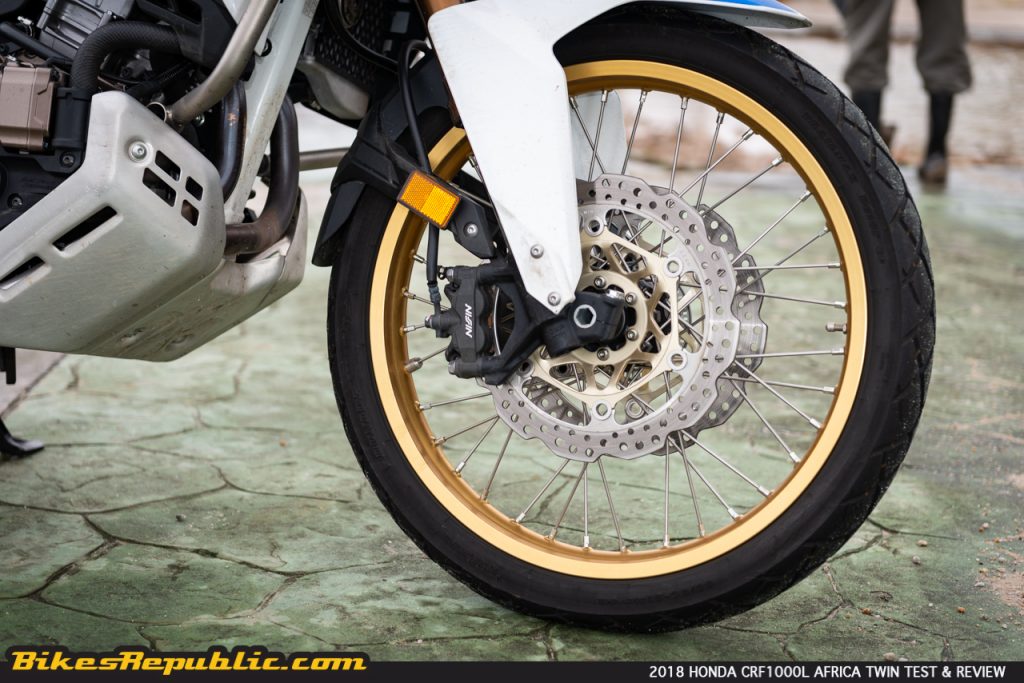 These handling traits disappear when the road turns to no road. There’s a large button marked with a “G” (for gravel) right next to the instrument panel. Pressing that switches into gravel ride mode and the corresponding levels of electronic intervention.

The softly sprung suspension absorbed the bumps easily and the bike seemed to float. Again, the bike’s slim waist was advantageous as it lets you move around while standing up.

However, it still felt top heavy for me. It possibly has to do with my height. At 167cm, I’m probably too small for the bike. A person from 180cm and up ought to reap the benefits of its ergonomics. 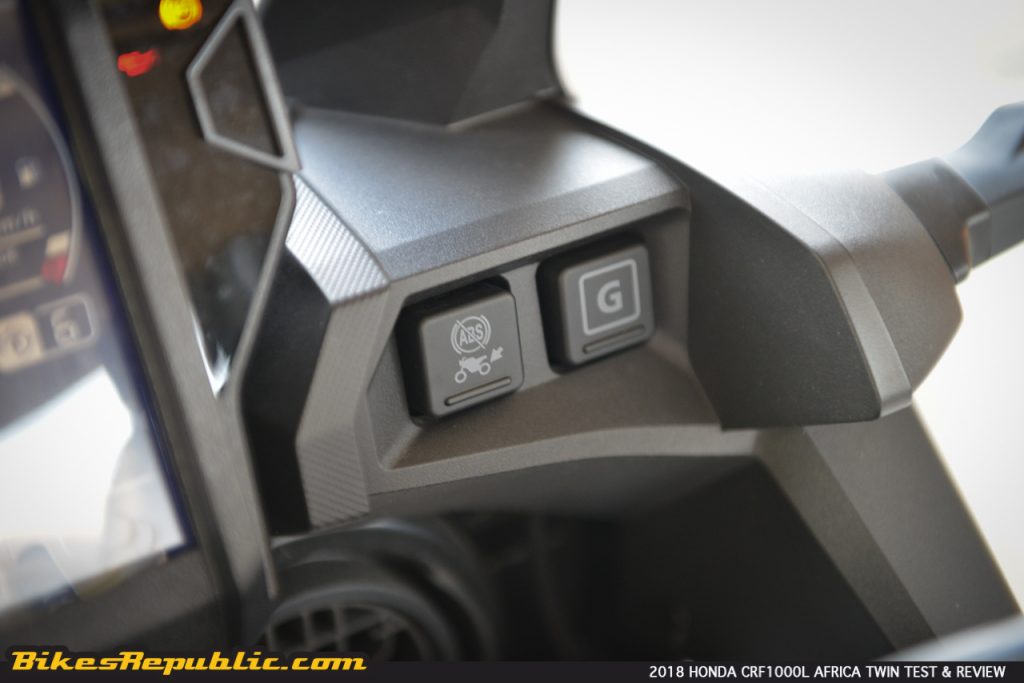 Shifting is via toggles on top and below the left switch cluster. 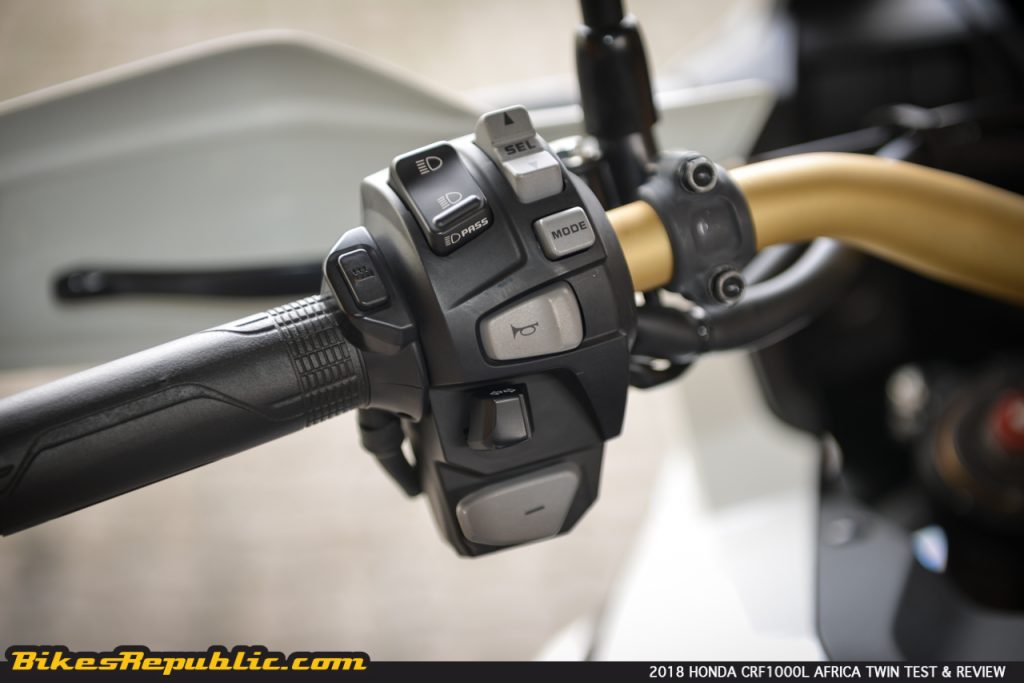 In D, the bike drives like a giant scooter. The transmission takes care of the upshifts and downshifts automatically. The rider can intervene at any time, but it upshifts early for smooth power and fuel savings

In S, shifting is still automatic but it will hold on to a gear until peak torque before shifting up. The gearbox will downshift when a certain limit is reached, and it will blip the throttle automatically. The rider can also intervene at any time. 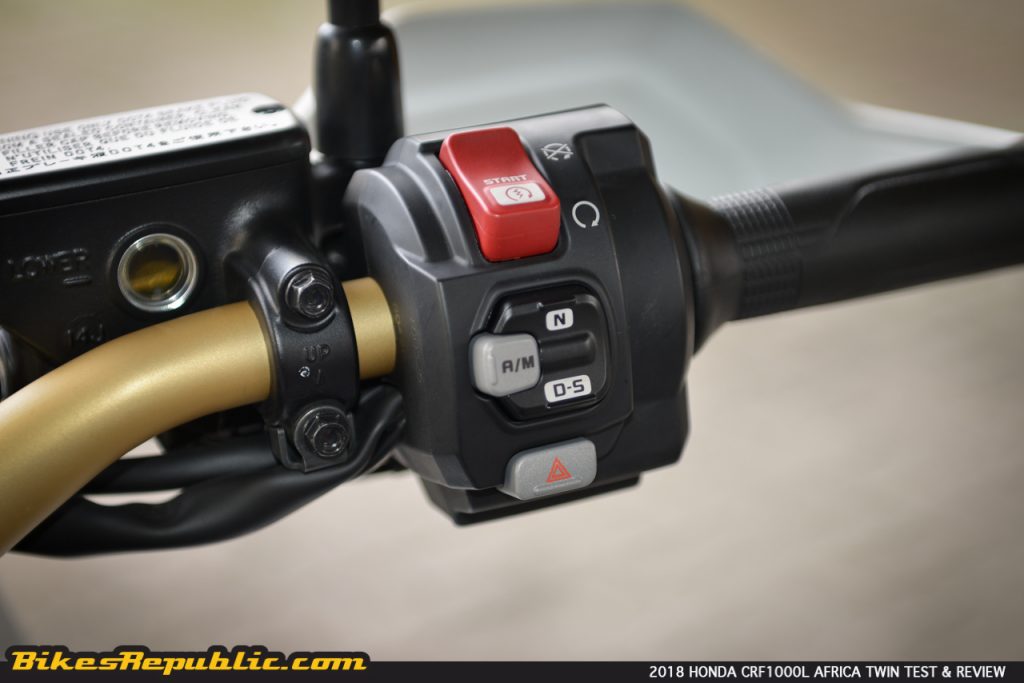 In M, the rider is in charge of gear selection. The engine will also auto-blip the throttle when downshifting.

Just like the VFR1200, the Africa Twin with DCT doesn’t feature a clutch lever and gear lever. This is when you have re-learn how to ride a motorcycle.

Using the fully automatic “D” feature was convenient but bear in mind that it shifts when you least expected it to. Like upshifting in the middle of a corner or downshift when you’re rolling to a stop. We found out the hard way. 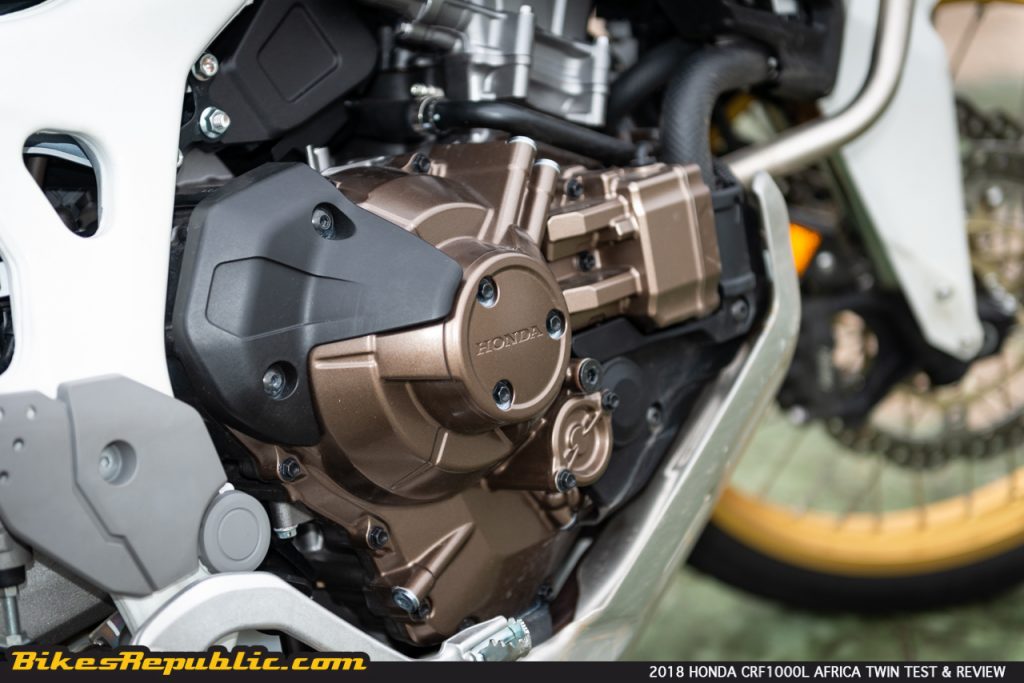 I was riding with my wife as the pillion. The transmission was in D-mode, 2ndgear as I filtered past two rows of cars. It suddenly kicked down to 1stgear without warning. But since there was no clutch lever, it felt like the engine had cut out, followed by that sickening feeling of a bike toppling over.

There was a BMW 3-Series on our left, but thankfully my reflex kicked in and I pushed out my left elbow which landed on the car’s driver side window. It held the bike up from falling onto his car!

So, lesson learned. I tried S-mode for a while then decided to just use M-mode anytime I ride. 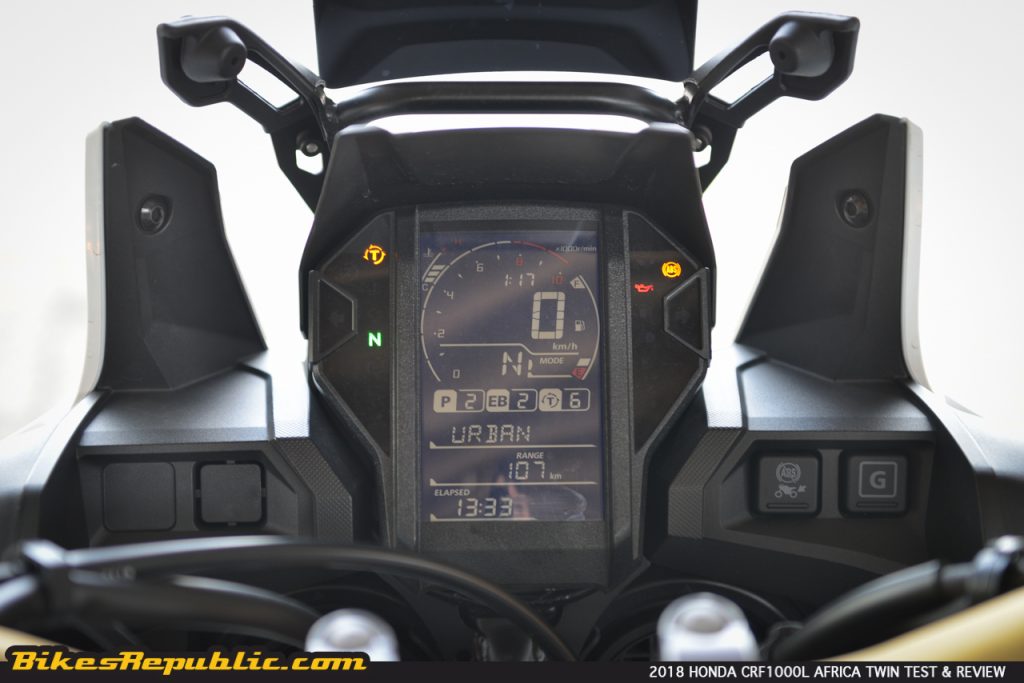 Nearing my house, I shifted into 1st(you can’t shift into N when the bike’s moving) and stopped to let a car pass. I reapplied a little bit of throttle to drive the bike up to my gate.

BUT! The engine “caught” like what happens when you release the clutch lever with no engine RPM. It put out a “CLACK!” Again, no clutch lever. My reflex tried to reopen the throttle but it didn’t catch. The bike went over on the right side like a poor tree while blasts of profanities violated my neighbours’ ears. And I swear I didn’t touch the brakes!

It meant that you can’t pussyfoot with the throttle. 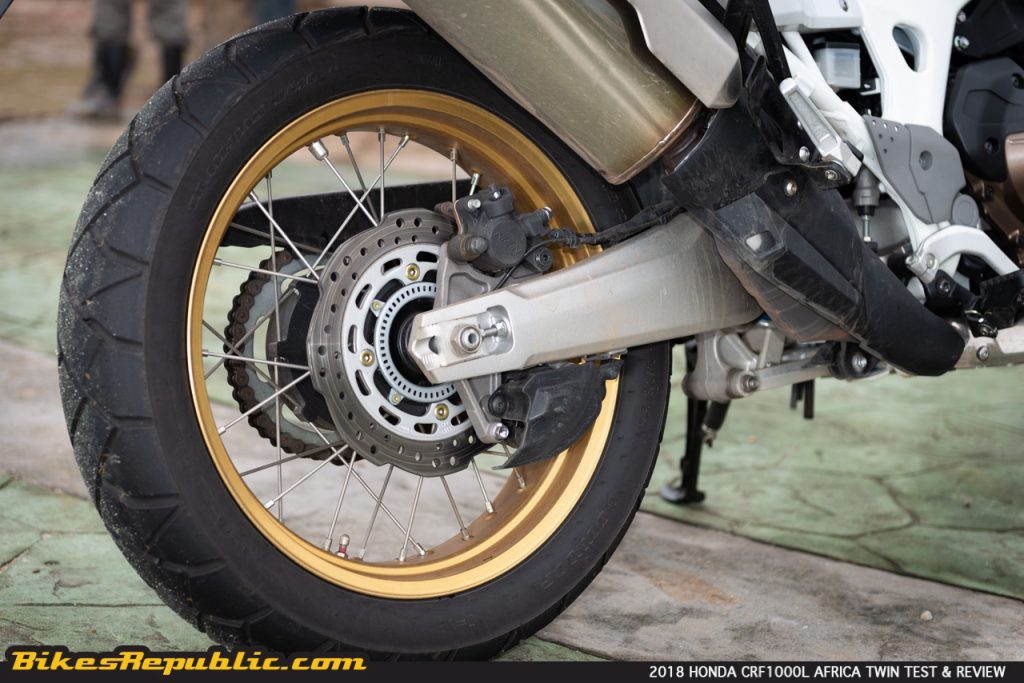 We know, it sounds like we didn’t enjoy ourselves with the Honda CRF1000L Africa Twin. But we assure you that it was okay 75% of the time. It was too bad that the DCT and height needed too much concentration.

It’s a nice bike to ride if you’re an Africa Twin and Honda fan, not bad if otherwise.

The caveat is you need some time to learn it, especially if you opt for the DCT version. Besides that, the ergonomics really need some getting used to as it’s rather different from other dual-sport bikes we’ve ridden. 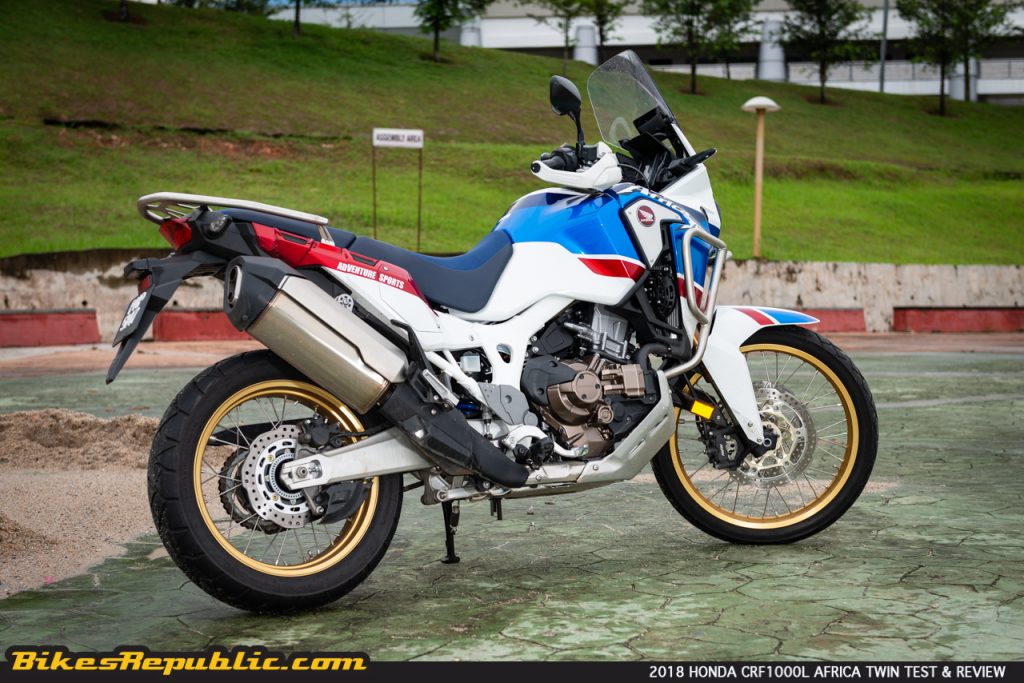