We often hear our riding buddies talk about “horsepower,” “compression ratio” or “aspect ratio.” Or you may have read them in our reviews and articles. But what do those terms really mean? That’s why we decided to put together this Glossary of Motorcycle Terms.

We decided to stick to the major components on a bike and stuff that are directly related to a motorcycle. We shall probably publish another glossary for other things such as types of tools, for example.

I took us many months to compile all these, so we hope you would take a look. Plus, it’s cool to be smarter, trust us. But do check back once in a while, as we will update it from time to time.

Anti-lock Braking System. The system prevents tyres from not rotating when hard braking pressure is applied. It allows the wheel to turn a certain degree, preventing skidding and enabling the rider to control the bike.

Stores air pressure so there is always positive pressure when the throttle bodies’ and carburetor butterflies are opened. The airbox also contains the air filter. 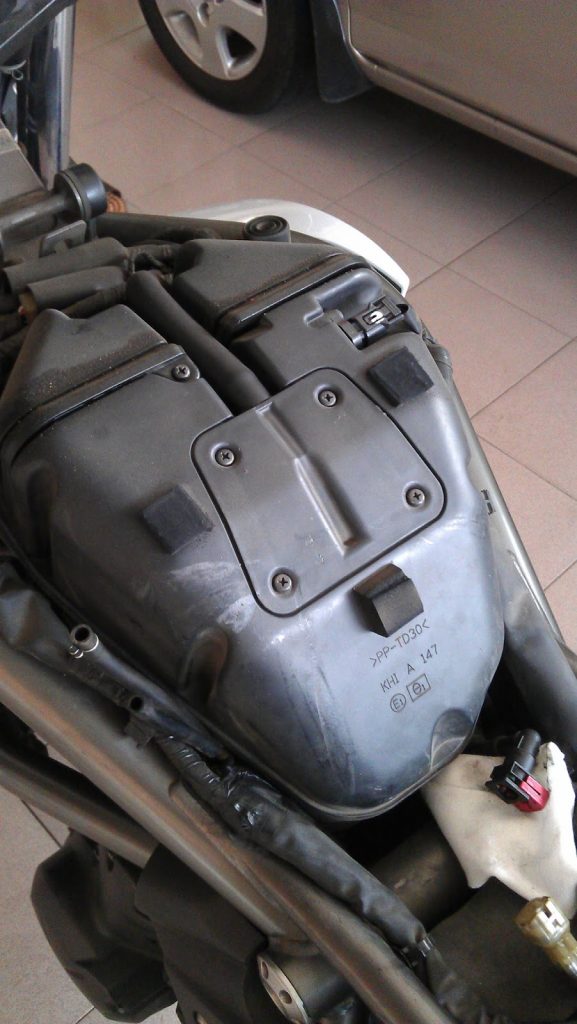 Alternate current. As opposed to DC (direct current), AC oscillates back and forth. The motorcycles stator (generator) produces AC, which is then directed through the regulator/rectifier to convert it into DC.

Almost all motorcycles do not use alternators to generate a supply of electricity like cars do. See “stator,” instead.

All The Gears All The Time. That’s right, never ride without proper safety gear.

The metal shaft which holds the wheel up and links the both sides of the forks and swingarm.

A piece of plating, in aluminium or steel which is mounted to the bottom of the engine’s crankcase. It protects the crankcase from being “bashed.” Usually found on adventure and off-road bikes.

Brake horsepower. It measures the engine’s power output without any losses. Conversely, HP (horsepower) is measured by hooking the engine to a dynamometer. BHP is measured in a controlled environment without attaching anything to the engine. Hence, BHP figures are bigger. See also “horsepower.”

The other term for motorcycles, although it originated from bicycles.

No, we don’t mean the glue that hold the pages of a book together. See “brakes.”

Act of removing air bubbles from hydraulic circuits, such as the brakes, cooling system, etc.

Represents the diameter of the cylinder in which a piston travels. The bore and stroke determine the displacement/capacity of the engine.

A Boxer engine has its cylinders mounted opposing each other, hence it’s also called “opposing twin” or “flat-twin” for two-cylinder machines such as the BMW R-series. The reason it’s called a “Boxer” is because the pistons appear like a Boxer extending his arm outwards and inwards. The Honda Gold Wing is a flat-Six, so you can call it a horizontally-opposed six-cylinder engine.

The apparatus which helps you to set your speed, slow down and come to a stop. Almost all motorcycles now use hydraulic disc brakes, with just a few using the traditional cable actuated drum brakes.

A brake caliper carries the pistons that push the brake pads onto the brake disc. There are a variety of types, such as the two-piston sliding pin and the latest four-piston “monobloc.” There was a brief flirtation with six-piston calipers but the concept has since been abandoned in the advent of better disc and pad material.

The disc is mounted to the wheel, thus brake forces that act on it slows down the wheel, hence the bike.

The “blood” of the hydraulic brake system. It’s the medium which transfer the force from your fingers to the brake pads. Contained in the reservoir.

It applies pressure to the brake fluid when the brake lever is squeezed.

The material which rubs against the brake disc or drum housing, converting kinectic energy to heat

The act of keeping the bike stationery or near stationery while the rear tyre spins freely and pours out white acrid smoke. A sure way of shortening the lifespan of your tyre.

The “valve” which sits in the throttle body (fuel-injection) or constant velocity carburetor. Opening the butterfly opens the intake tract to a vacuum which pulls in air. In a fuel-injected system, the fuel-injector sprays fuel into the airflow. As for carburetors, the vacuum sucks fuel from the float bowl through jets that atomise the fuel.